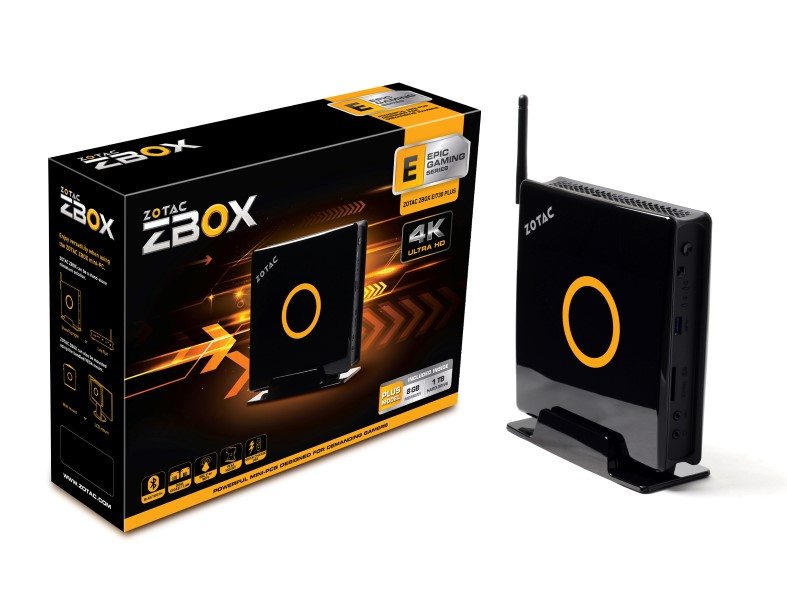 Today I’m having a look at something different compared to our usual laptop-and-monitors fare. It’s the Zotac Zbox EI730 Plus, which looks like a crazy router but is actually a tiny, complete PC. The EI730 can be attached to the back of a TV or monitor, placed on a stand or tucked into a small messenger bag. With a Core i5 processor and integrated graphics, it’s capable of running some games too. The EI730 is an interesting package, so let’s take a closer look at what’s inside. 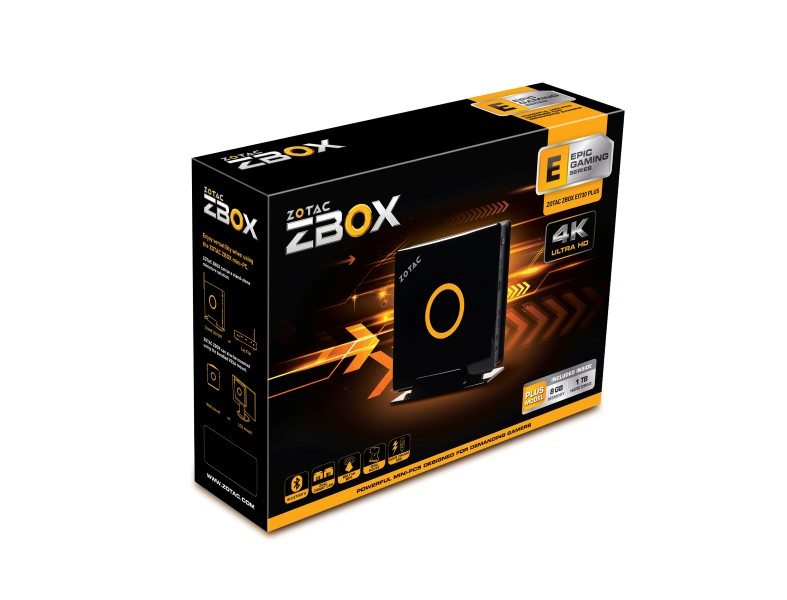 The EI730 Plus comes in a fairly standard cardboard box, which boasts of the kit’s 4K capabilities and has some sweet speedy orange arrows on it. So far, so good. 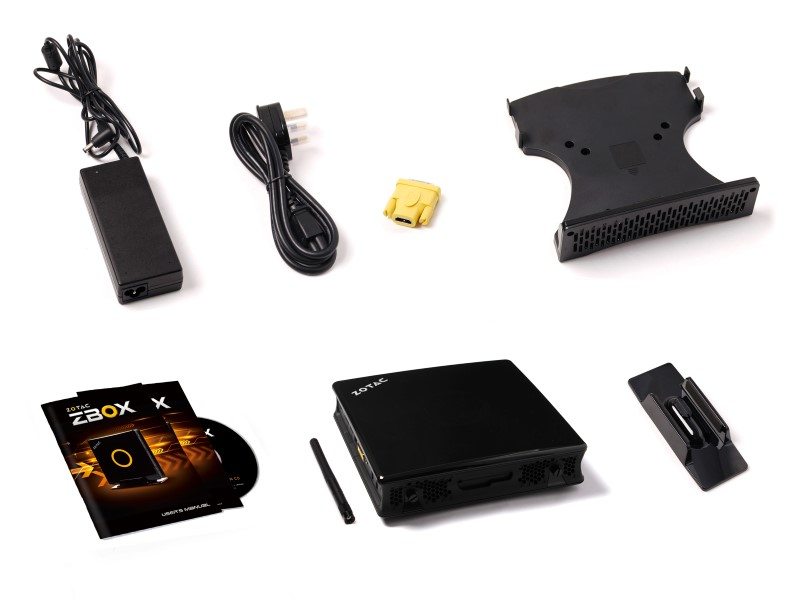 Here we can see the full spread – Zotac have done well to provide for every eventuality here. Left to right on the first row we have a laptop-style external power supply in two pieces, a yellow DVI to HDMI adapter and a VESA mount for placing the ZBOX behind your TV. On the second row we can see some booklets and a CD-ROM, the WiFi antenna, the Zbox itself and a stand to allow it to sit vertically more easily.

This will be pretty straight-forward, so let’s get started. This is the EI730 – it is a small box, about 19cm square, with a depth of about 5cm. It’s a little bit thicker than a Wii, with a square body with sides about 10% shorter than the Wii’s longest side. The EI730 comes in a black plastic case, which is transparent to allow an orange ring to light up while the Zbox is turned on. A Zotac and 4K Ultra HD sticker are emblazoned on two corners. 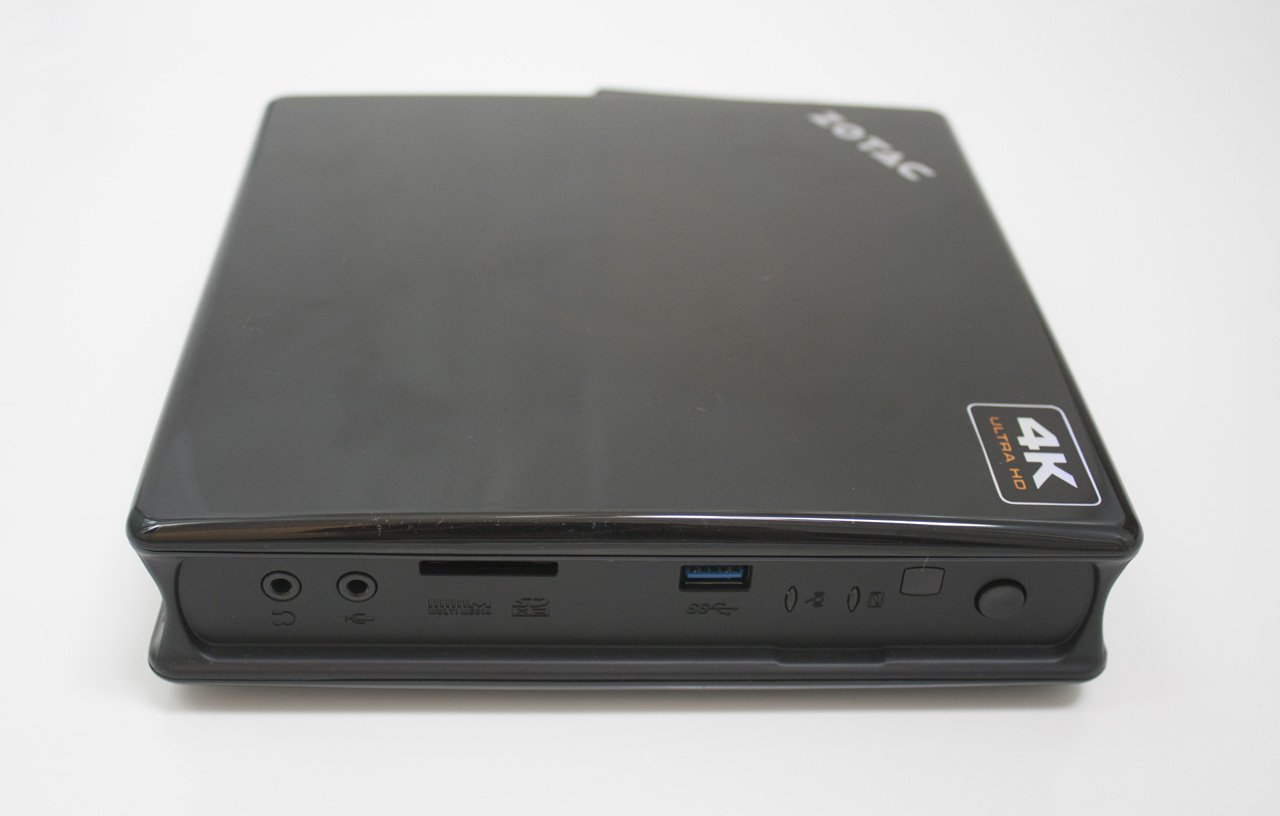 From the front, we can see the most easily accessible ports: two 3.5mm audio ports for headphones and microphones, an SD card slot, a USB 3.0 port, some LED indicators, an infrared receiver and a power button (which glows red when off, and green when on). 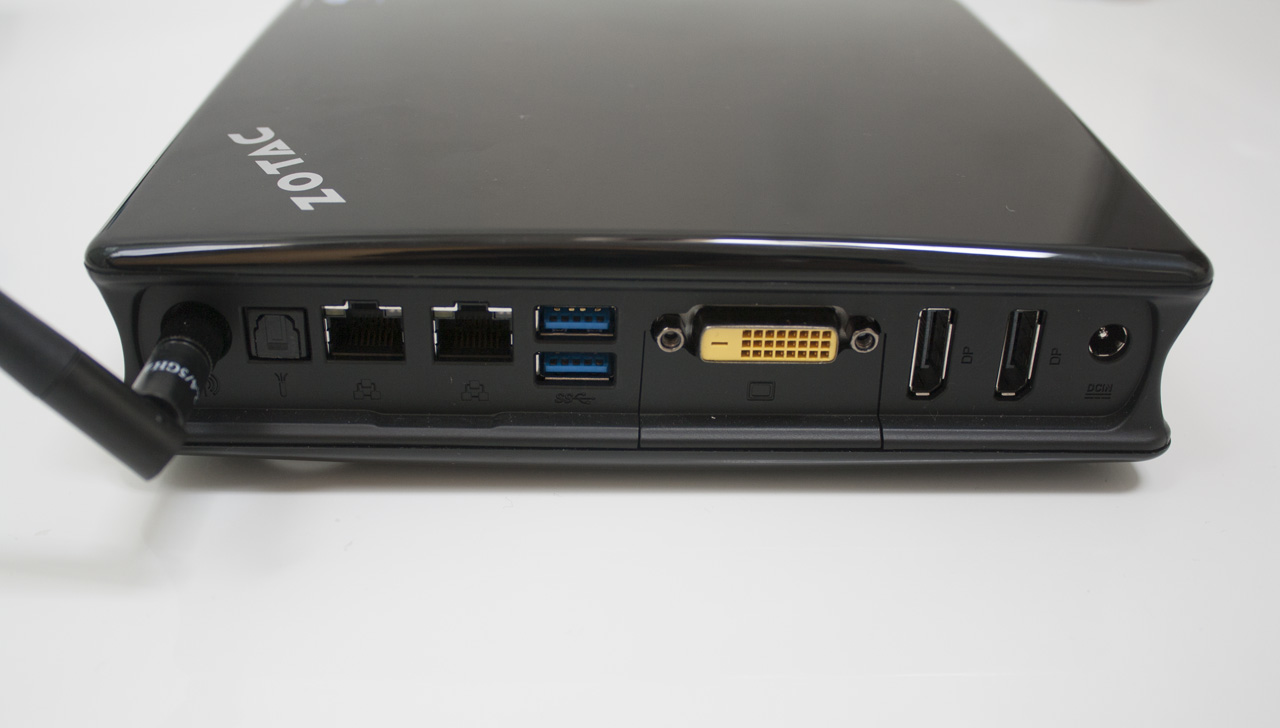 The back is home to most of the remaining ports, and a WiFi antenna on the far left. Going from left to right we have a S/PDIF optical audio port, two gigabit ethernet ports, two USB 3.0 ports, a DVI port, two DisplayPorts (allowing for 4K connections) and the power-in port. 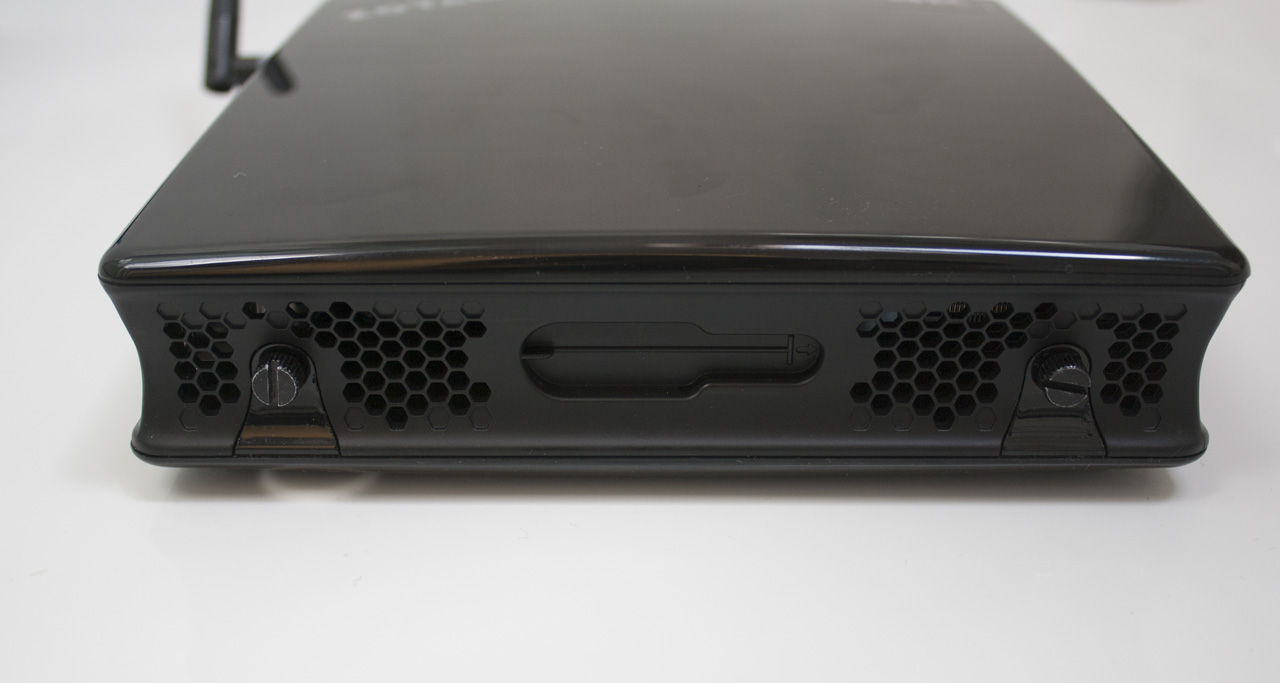 The left side of the Zbox has nothing in particular – just fan vents and screws to access the innards. 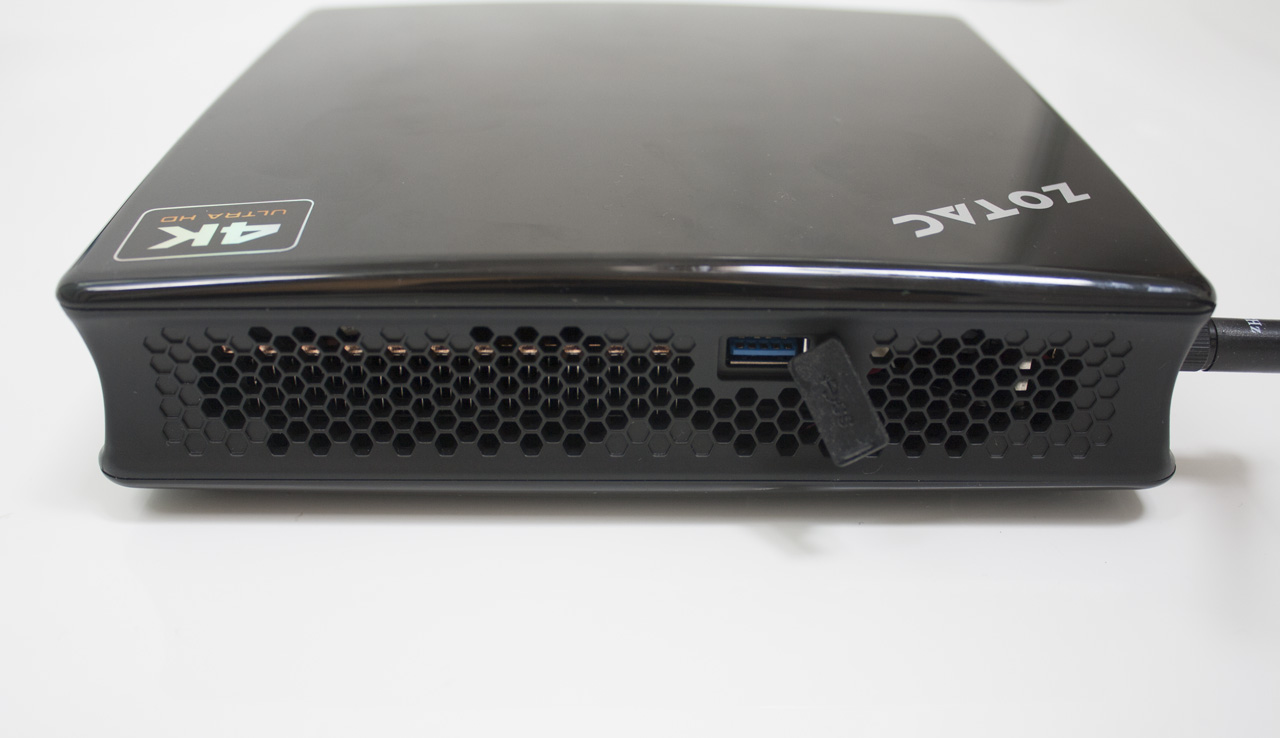 On the right hand side we have more fan grilles and a single USB 3.0 port, hidden behind a soft plastic cover. 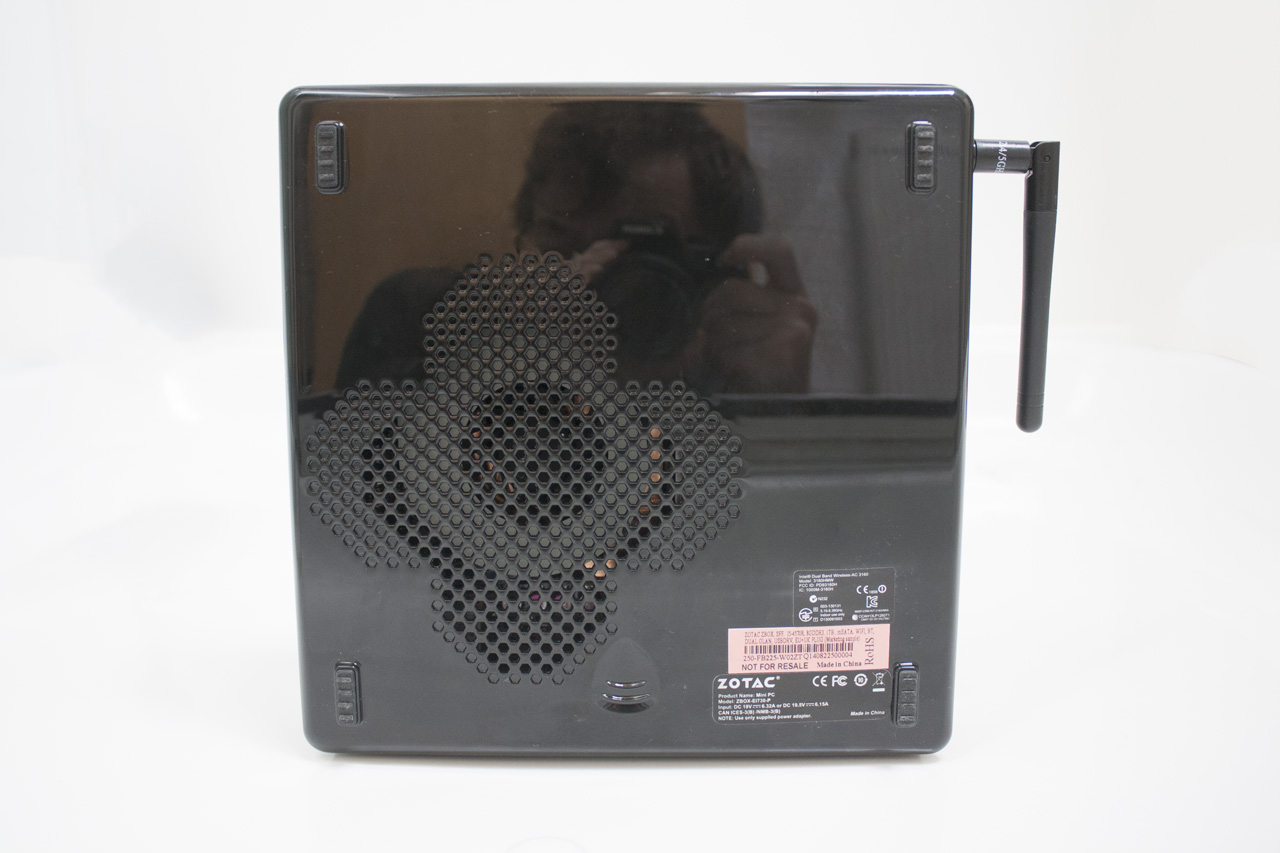 The bottom of the box is highly reflective (yay, accidental stardom) and also contains the largest fan grille and some regulatory information. 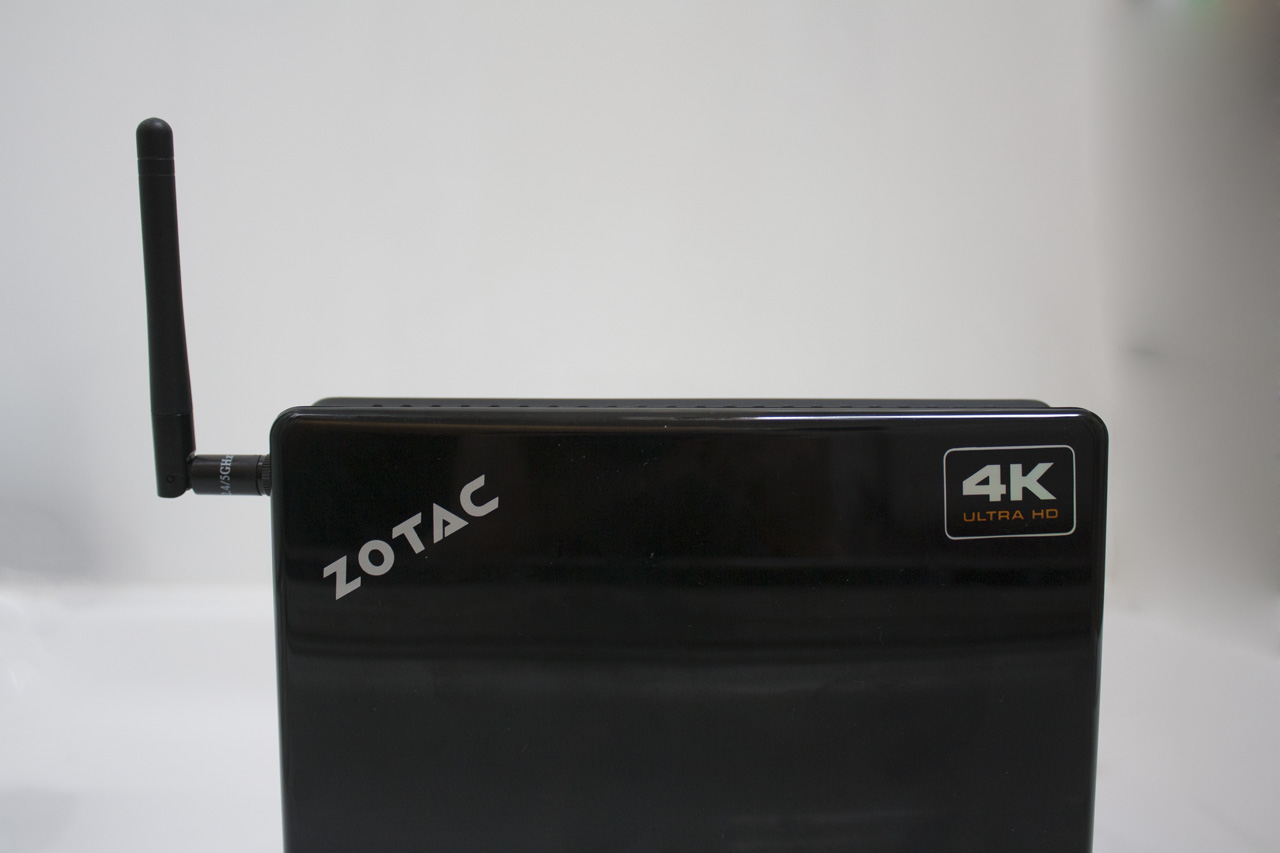 As you’d expect, the EI730’s antenna can be angled and rotated appropriately. It’s a slick little package, but the box is likely to be sitting behind or underneath something instead of taking a place of pride in public view.

We’ll be running the same benchmarks here as we do for our gaming laptop reviews, as even with on-board graphics, the EI730 should be able to produce some reasonable results, perhaps comparable to the Aspire S7 and V5 which also run on integrated solutions.

We expect to see scores somewhere above the Aspire S7 and V5, since the integrated Intel chip used here (Iris 5200) is more recent and more powerful than the HD4000 in these laptops. Indeed, we see results almost identical to the GTX 650M used in the U2442F (and much better in the ‘easier’ tests). We also see about double the score of integrated GPUs from the last generation like the Acer V5 and S7.

This is not a bad result at all, and one that speaks to the strength of modern integrated GPUs. The U2442F laptop ran StarCraft II and similarly kind titles at a strong 1080p, so we can expect similar results in our later subjective testing.

We’ve never run Cinebench on our earlier laptops, so I’m expecting a fairly bad score here – and that’s delivered. We have a result of 51.57 fps for the OpenGL test, with the render test reporting a score of 451 cb. That places the box dead last, but not by much considering the P25W has a decent discrete GPU. Again, this is suggesting playable if not stellar frame-rates in games. 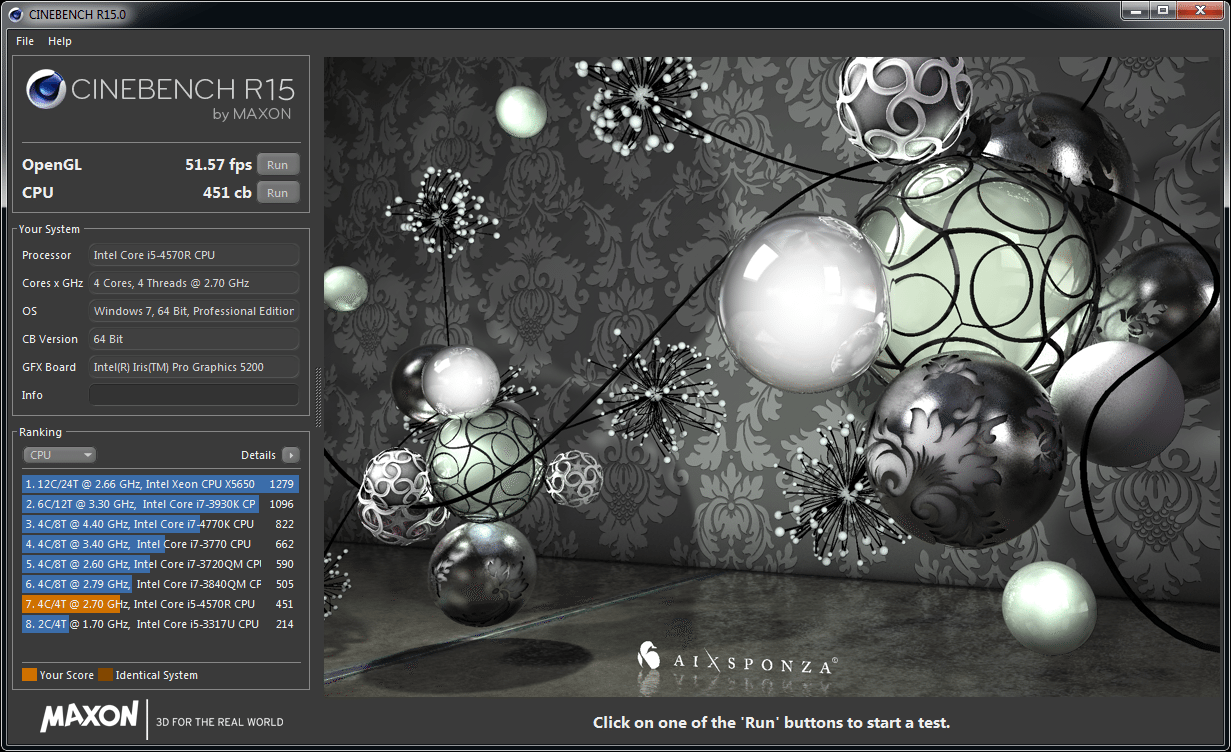 This is a CPU and memory test, so I’m expecting results that are better than at least our last-generation laptops (the P25W and P27K).

Metro is a challenging game, both on you and your PC. Its benchmark tool is quite formidable, so let’s take a look at how the EI730 performs in an actual game. The settings are Direct X 11 renderer, 1920x1080p, High quality, AF 4X filtering, normal motion blur, no SSAA, DirectX 11 tessellation or PhysX.

We expect a pretty bad result here – and indeed we get one. An average FPS of 16 is pretty unplayable at 1080p, but that’s to be expected given the graphical fidelity of Metro: Last Light. By comparison, the last laptop we tested – the P34G v2 – received a score of 30 fps with its discrete GPU, which is somewhat playable.

I also got quite a few crashes attempting this benchmark, which is something I haven’t seen from any other machine I’ve tested. I didn’t find any crashes in other benchmarks and the Last Light benchmark is challenging, but it’s still a worrying sign to get a crash instead of just very low FPS.

Our final benchmark is Company of Heroes 2, an excellent strategy game centred around the Eastern Front of WW2. The game includes a robust worst-case benchmark, so if the game is playable here then you’d expect much better results in actual singleplayer or multiplayer. A large update was recently released, but tests on my main gaming PC don’t seem to indicate any changes in benchmark performance. The test settings are 1080p resolution with no unit occlusion, v-sync or anti-aliasing, then medium for the other options.

The previous generation of Gigabyte laptops (with discrete GPUs) recorded scores of 24, 26 and 20 – so ~15 FPS isn’t a terrible result and proves the Zbox can handle games at lower frame-rates, resolutions and/or quality settings.

First, we’ll discuss the EI730’s performance in regular day-to-day use and while playing media; then we’ll move onto the gaming performance (because this is XSReviews, after all).

The EI730’s small dimensions, light weight and quiet fan make it a good work companion. You could easily take this PC to work every day in your bag, plug it into the monitor and peripherals you leave at work, and then take it home to do more work or to use as your main PC. Of course, the same characteristics also make it a good media PC. You can even attach it to the back of a TV or monitor with the VESA mount, turning your display into a handy all-in-one PC. You could also opt to install a media server, then just stream from the EI730 to your smart television, games console or other media box. 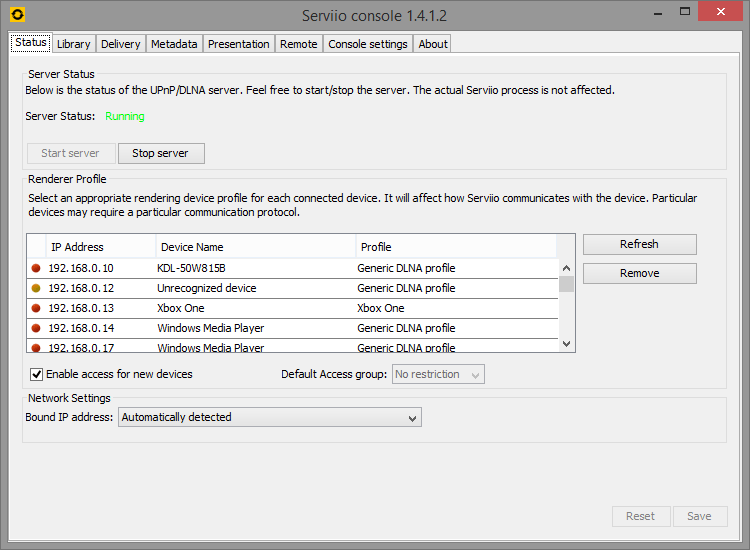 A media server running on Windows

In terms of media playback, the EI730 performed excellently. The number of ports on offer and the strong integrated GPU ensured swift playback of every video I tried, even those at incredibly high resolutions (e.g. 1440p/60, 4K/30). If you’re using the Zbox as a media-playing mini PC, then you’ll find more than enough performance here.

A lot of my impressions were coloured by the poor performance of the 1TB 5400 RPM mechanical hard drive. It took a long time to boot up, start benchmarks, start games and generally get around in Windows. I’d recommend picking up the box and adding an SSD immediately for your Windows (or other OS) install, as the 1TB 5400 RPM drive is really only useful for media storage in this day and age. If you’re using the Zbox as a media server it’s not an issue, but for actual Windows use it’d be worthwhile to add that SSD.

We could hardly let the EI730 get away without trying at least a few games on it, and so we installed a few favourites – Wasteland 2, StarCraft II, XCOM: Enemy Unknown and Counter-Strike: Global Offensive.

StarCraft II worked well on the box at 1080p and high settings, although the keyboard-and-mouse nature of the game makes it less ideal for a box that could so easily be sat behind (and attached to) your TV.

Wasteland 2 was our next game of choice. The game uses the Unity engine, and was released just a few days ago. The game has a good range of graphical options, so we felt confident installing it to test. We set the game to 1080p with high settings (although no vsync or anti-aliasing) and the game ran smoothly, much to our surprise.

XCOM: Enemy Unknown is a few years old now, but still offers good graphics. We know the game worked OK on the Intel HD4000 series integrated GPUs, so on Iris 5200 we should be in good stead. And indeed, we got a flawless performance at 1080p, with high graphical settings. The game ran smoothly through the first couple of missions and even somehow loaded fast on the 5400 RPM mechanical hard drive – so no complaints here whatsoever! 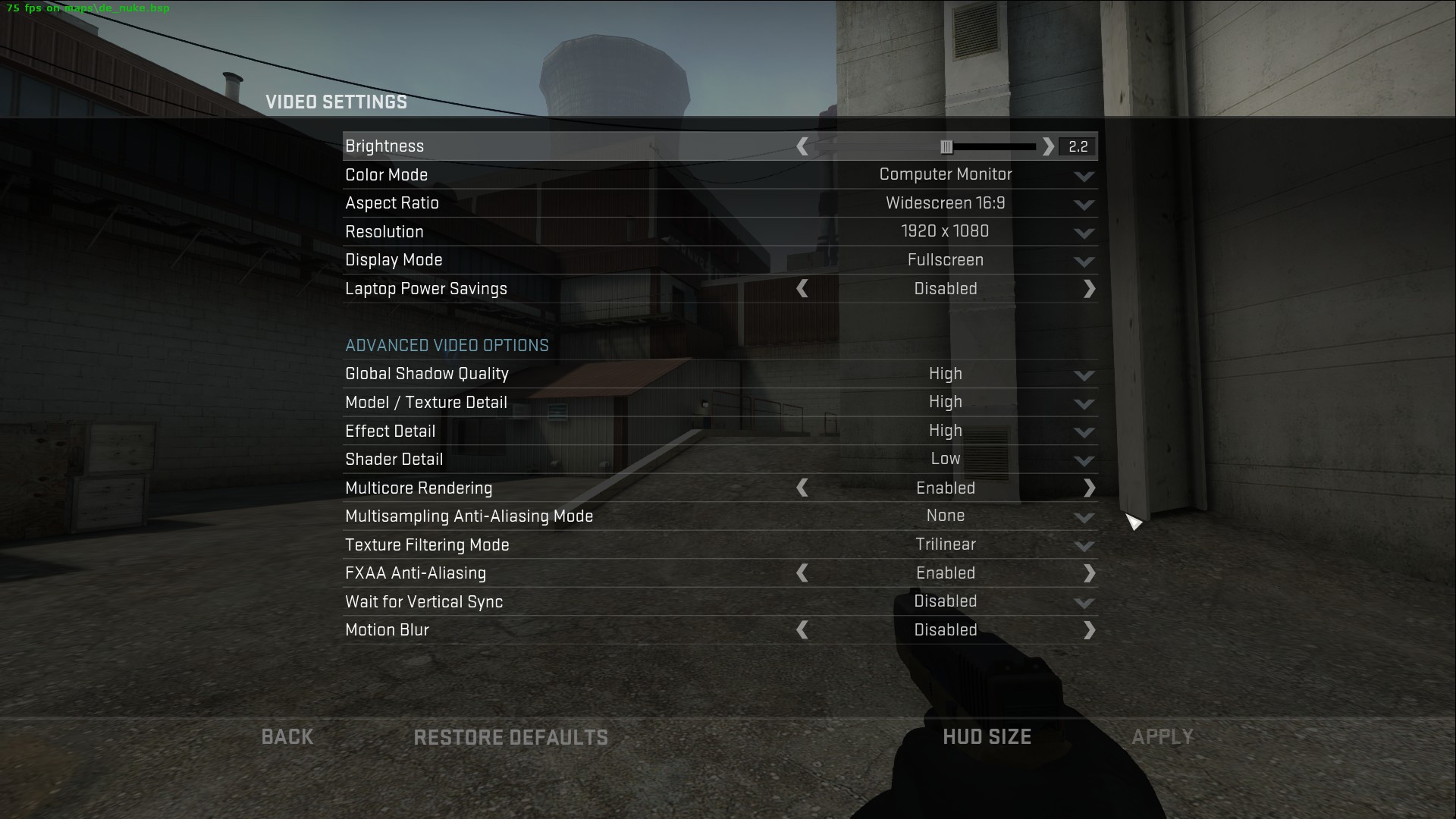 Counter-Strike: Global Offensive was the final test – could the Zbox be used for a competitive FPS where every frame counts? Surprisingly: yes. With high settings and 1080p resolution, the game ran smoothly at 60+ fps. There were occasional slowdowns, but never to dangerous levels. Running at slightly lower settings to target a higher stable FPS would probably make sense for most competitive players, but this box is definitely capable of running Counter-Strike: Global Offensive with aplomb.

Overall, the Zbox provided reasonable results for a machine without a discrete GPU. While the games we tested worked well, the Metro and Company of Heroes 2 benchmarks showed that you won’t be able to tackle every game… and many will run well only at low resolutions and/or graphical settings. If you only want to play older or less demanding titles though, you’ll be surprisingly well covered by the EI730.

The EI730 surprised us – even without a dedicated GPU, it offered reasonable frame rates in many games and some tough benchmarks. That speaks to the rapid pace of integrated GPU development, and the strength of the package that Zotac have put together here.

If you’re looking for a small and light media PC capable of handling multiple displays or a single 4K TV or monitor, then the EI730 is a good choice. Despite a few crashes and poor performance from the bundled 1TB 5400 RPM hard drive, I was still impressed with the Zbox and it seems to provide a lot of bang for the £600 price point.