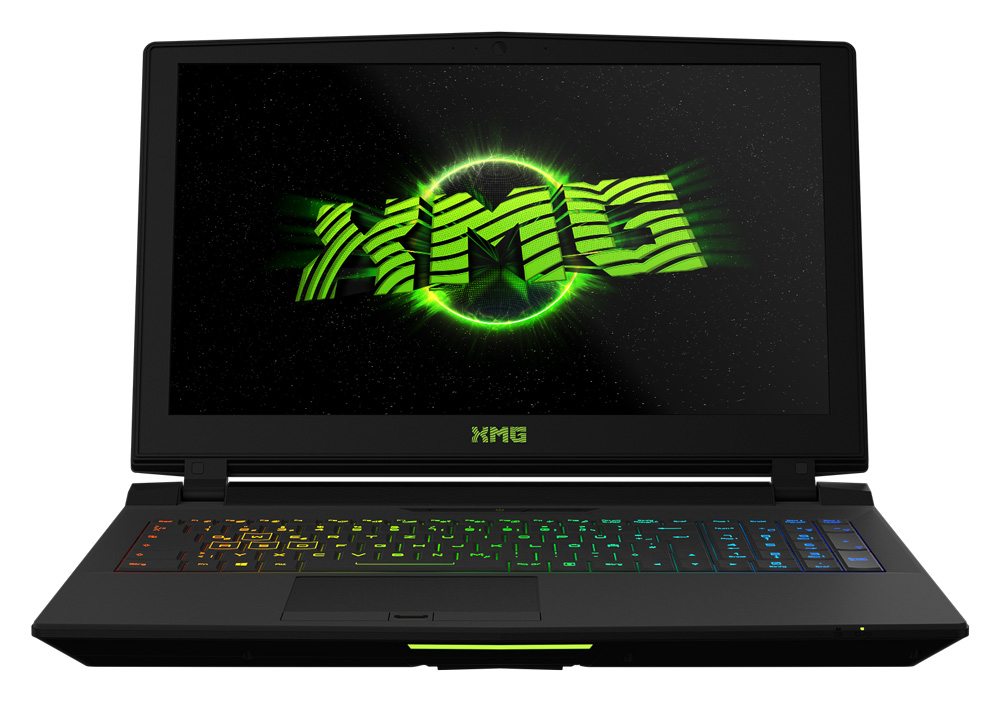 XMG offer three tiers of gaming laptops — Pro, Advanced and Ultimate. Today, we’re looking at the highest tier, the XMG U506. This is the company’s  most powerful 15-inch gaming laptop, and unsurprisingly it’s an absolute beast. It’s powered by a sixth-generation desktop Core i7 CPU and the best mobile GPU ever made, and includes rare features like G-Sync and an RGB-backlit keyboard. Let’s put it to the test!

The XMG U506 is an impressive beast right out of the box. It’s noticeably thicker and heavier than the average Ultrabook, unlike Gigabyte and Aorus’ rather slimline creations. That means more room for components and cooling, and should have a good effect on top-end performance.

The 15.6-inch display is flanked by a webcam above and the XMG logo below, and set on top of the main chassis with two strong-looking hinges. 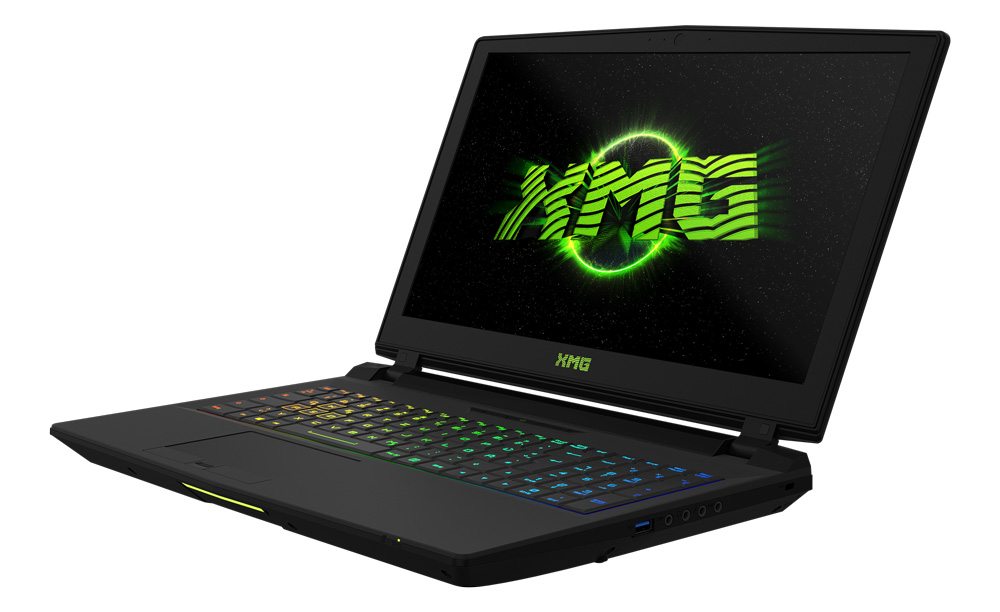 The keyboard is quite beautiful when backlit, with a choice of many different styles from solid colours, pulses, waves and more. These can be applied to each of the three zones separately, or to the entire board. There’s also an LED embedded below the trackpad, which provides a bit of underglow lighting and can also be set to the colour of your choice.

Many gaming laptops have shoddy keyboards that almost demand a USB keyboard be used, but that’s not the case here. The key travel here is respectable, making good use of the space available. Combined with the backlighting and the easy-to-read modern font, it’s quite possible to pick out keys quickly and accurately on this keyboard, whether you’re writing or gaming. The layout is sensible, and the keyboard doesn’t feel cramped despite including a number pad. 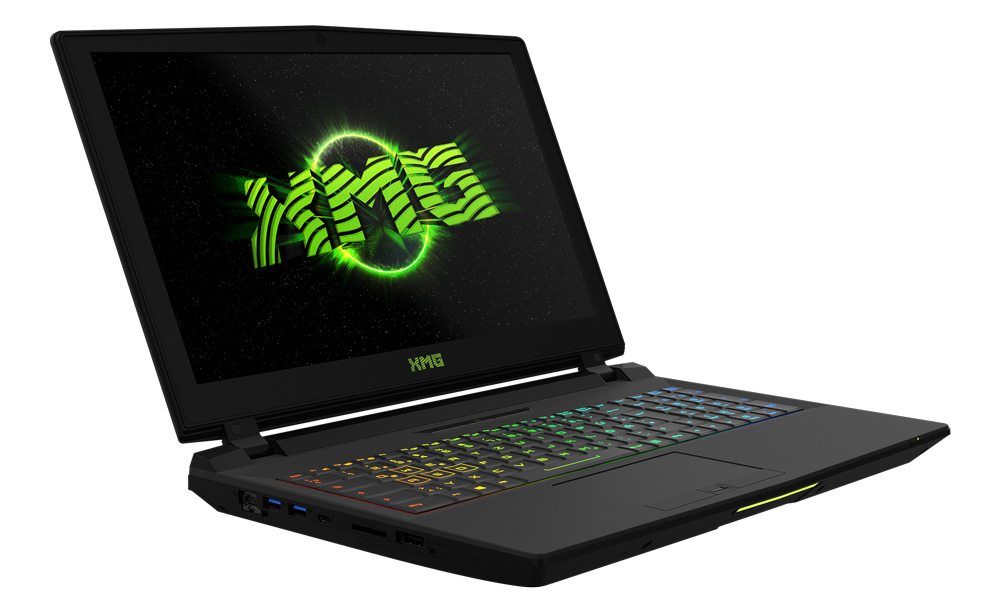 Above the keyboard we have the power button and a few indicators, and below we of course have the trackpad. The trackpad feels quite expansive, although its plastic construction doesn’t match the glass of a MacBook or Aorus machine. The trackpad has two soft buttons, with a fingerprint reader between them. 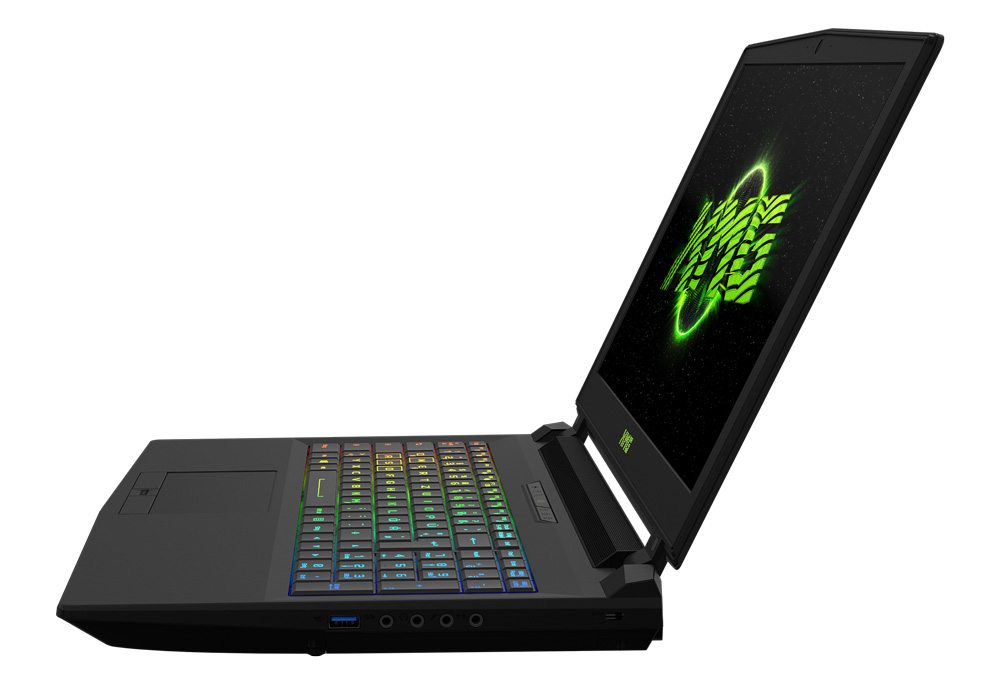 Looking now at the right side of the PC, we can see one USB 3.0 port, and four (count ’em!) 3.5mm jacks. These are to connect a surround sound headset or speaker system, and are a nice inclusion. 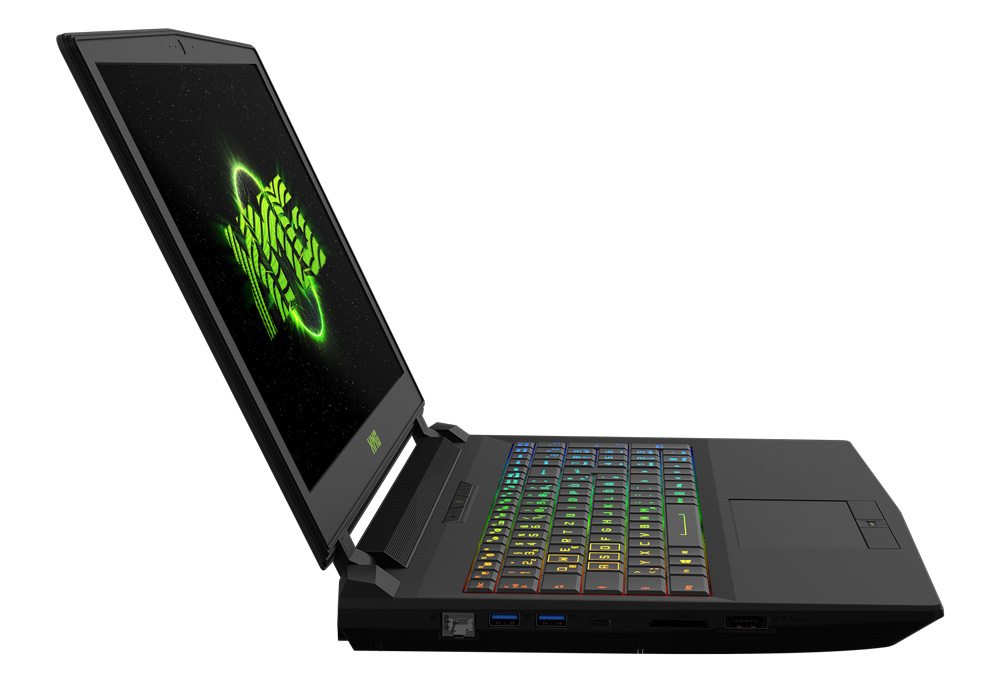 The left side of the laptop includes a gigabit ethernet port, two more USB 3.0 ports, a Thunderbolt port, an SD card reader and a combo eSATA / USB port.

The back of the laptop contains the U506’s power and video hookups. These include two full-size DisplayPorts and one HDMI port, allowing you to connect up to three displays. Awesome!

The XMG U506 isn’t the most svelte and stylish laptop, but it provides all the ports and features you’d want on a top-end gaming machine.

Now, let’s see how it runs. We’ll give the laptop our usual battery of benchmarks, followed by first-hand use for gaming, writing and surfing the web. Let’s get started! 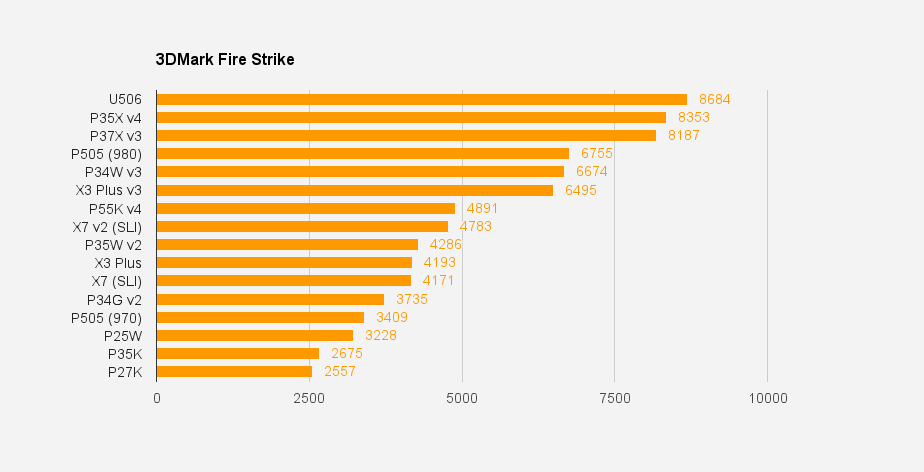 The U506 records our highest-ever scores in 3DMark. It turns out that having the best CPU and equal-best GPU we’ve ever tested makes for an unsurprisingly dominant performance. 3DMark is a good indicator of in-game performance, so we should expect this trend to continue. 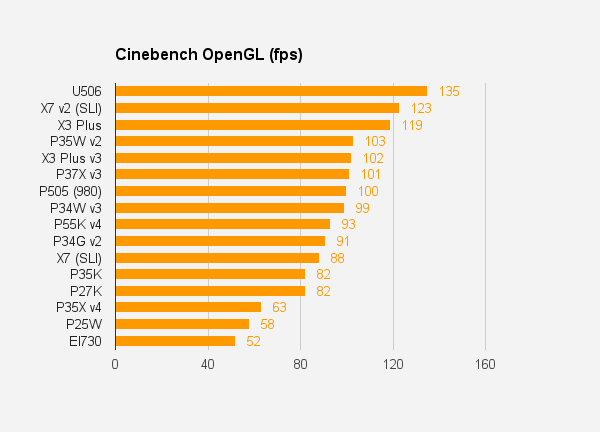 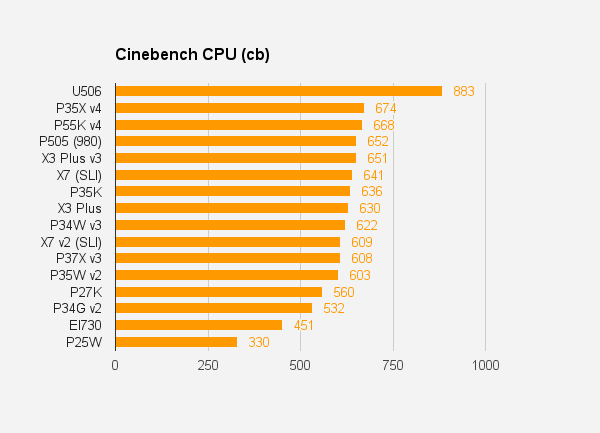 Cinebench scores are also convincingly higher than other laptops we’ve tested; even the OpenGL scores are higher than the dual-GPU Aorus X7 v2. The CPU scores are obviously off the charts, a trend that will continue due to that top-of-the-line desktop CPU. 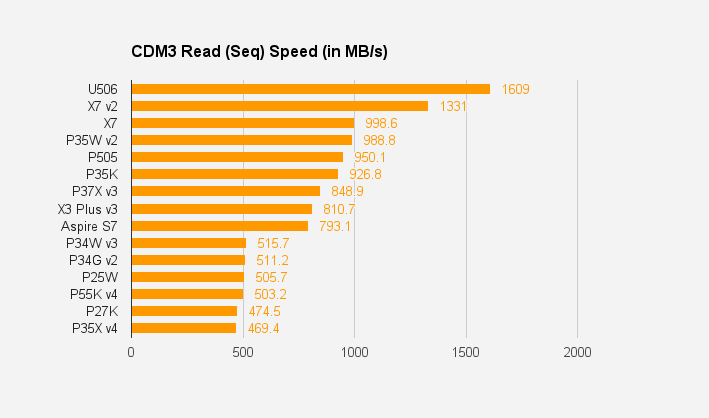 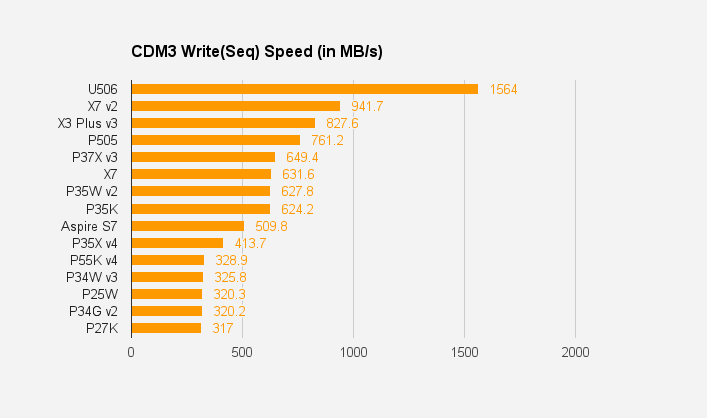 A laptop that has a crazy-fast graphics card and a blazing CPU doesn’t necessarily mean that you can expect incredibly fast storage speeds as well… but of course, if you’re spending this much on a laptop, then why not? Our review unit comes with a 480GB Samsung solid state drive, attached via PCI-e. That results in insanely fast read and write performance, much faster than we’ve ever recorded here at XSReviews. There are other configuration options available, but PCI-e storage seems well worth the upgrade. 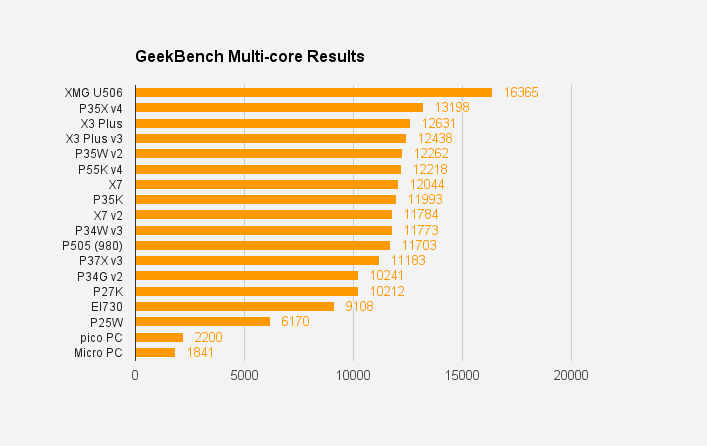 The U506’s desktop-class CPU is, funnily enough, in a class of its own. The U506 obliterates its rivals in the single-core and multi-core results, showing what you can accomplish when heat and power isn’t so much of a concern. 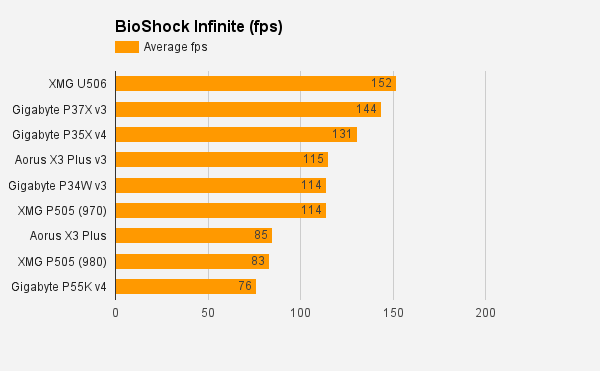 Our first title is not so demanding: BioShock Infinite. Like other Unreal Engine games, it relies more on the GPU side of the equation. That lets it take a sizeable lead over its competitors, scoring over 150 frames per second. For similarly intense games, expect to be playing on the highest possible settings at 1080p — or at higher resolutions via an attached monitor. 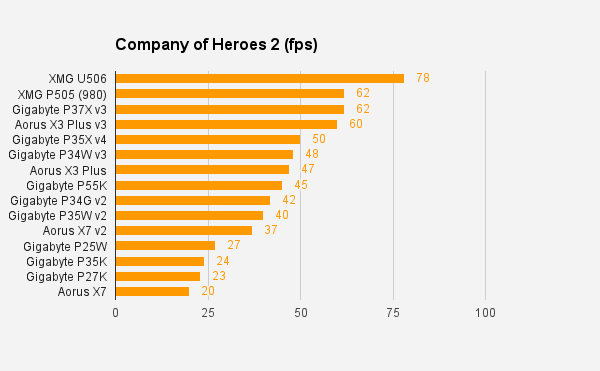 The U506 delivers the best ever performance in Company of Heroes 2, hitting an average of 78 fps during the frantic battle scene portrayed in the benchmark. Given the tough nature of the benchmark compared to the actual game, this is a great result. 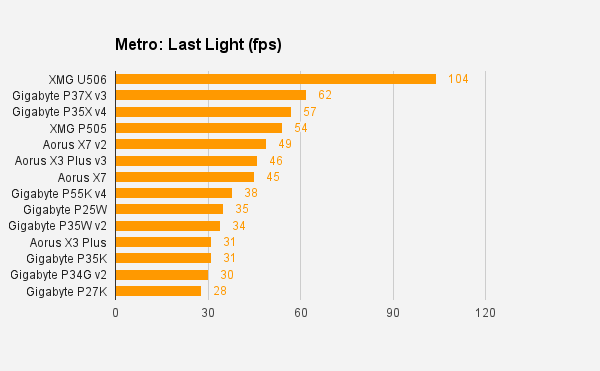 Metro: Last Light includes an excellent benchmark tool, which shows strong performance for the U506. It’s the top result here, with a glittering 104 fps performance — and with G-sync enabled, it still hits a solid 71 fps. This shows the crazy horsepower on tap with the U506. 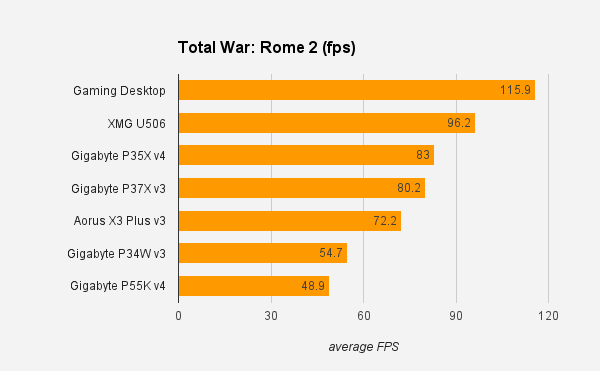 Our final test is Total War: Rome 2 at demanding Ultra settings. The U506 records the highest laptop score ever once again, and comes damn close to our desktop gaming rig with a stronger desktop GTX 980.

Now, let’s get into our first-hand impressions.

As you can tell from the benchmarks above, the XMG U506 absolutely slays any game you can throw at it. With a modest 1080p screen resolution to target, you can enjoy full detail settings in even the latest games, while still getting a competitive frame rate. 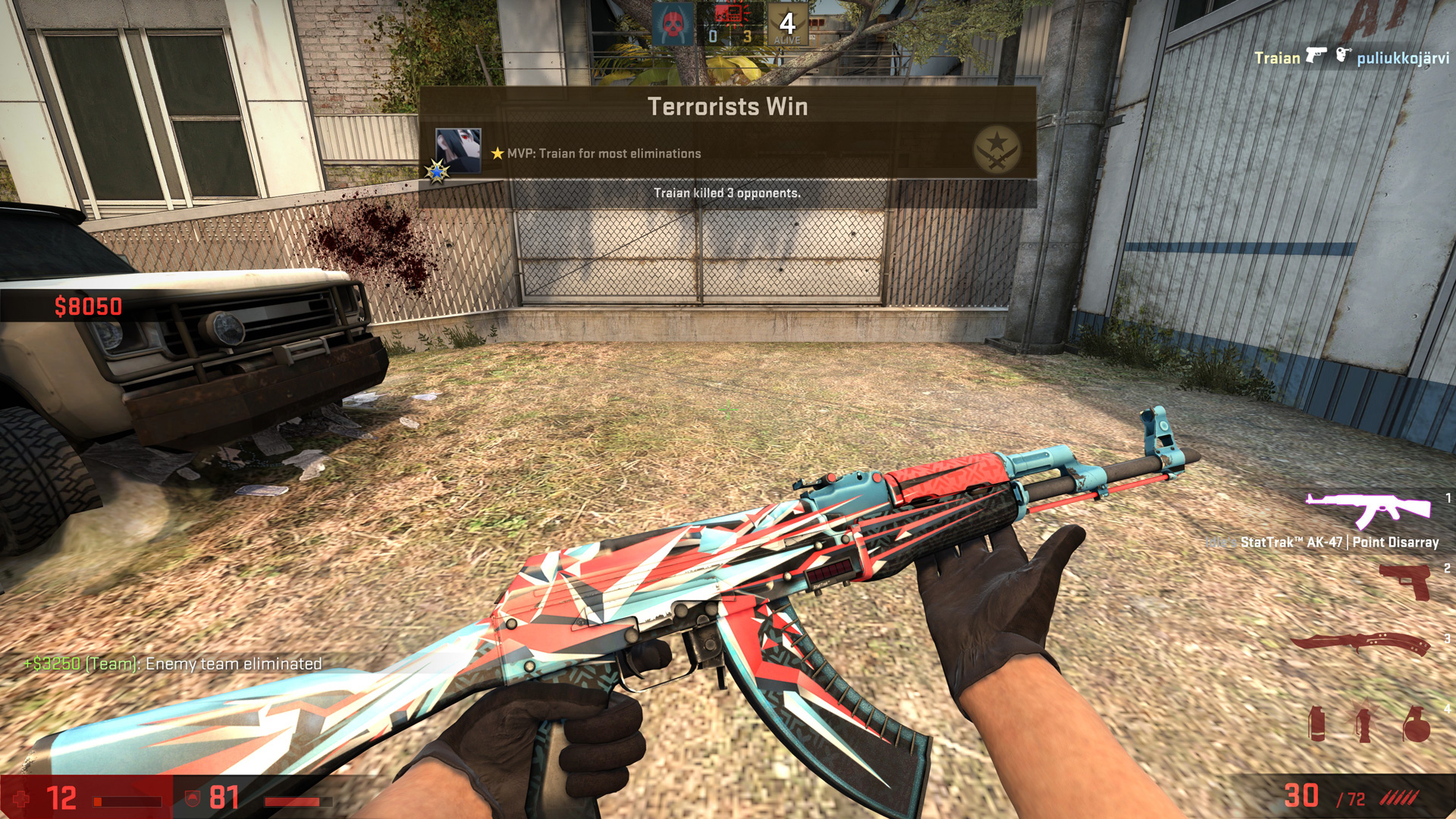