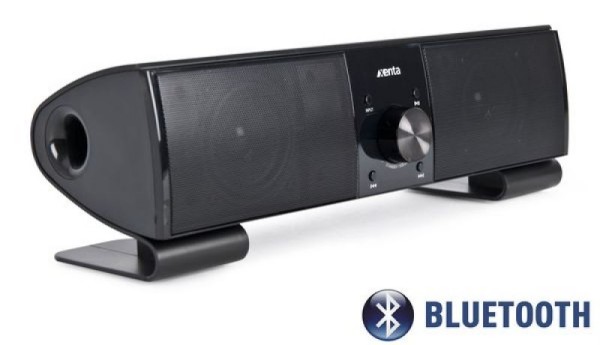 A number of months ago, I was sent a pair of speakers to review. While we immediately got to work on the travel-size wonder of the pair (that review can be read here), the Xenta LT-201s were lent to a house of seven with instructions to use (or abuse) as they saw fit.

Exposing the Xenta to one of the most abrasive living rooms known to man hould provide some insight into its longevity. The result of this accelerated life test should give an idea of how well the Xenta maintains its performance over time.

The Xenta is shaped like a large, rounded toblerone bar made out of matte black plastic. It sits on its side with moulded-in support legs to raise and angle it. Its front and centre control panel has the music control buttons for Bluetooth A2DP control and an input select button surrounding a multifunction dial.

A dual colour LED indicates power state and current input source (Blue for bluetooth, red for line-in). The multifunction dial cycles between controlling volume, the outer portions of the tone range (ie, the balance between the bass and treble) and the midrange level. It’s a combination that works pretty well once you get used to it, allowing you to find the best sound for whatever you’re playing through it, though it can be frustrating if all you want to do is set the volume.

The two 80mm drivers are placed towards the edges on the front face, protected by a simple black metallic grille each. Each side has a large radiused hole for bass radiation that works pretty well. It’s a subtle but not overly bland look, more designed for function than style.

The rear houses the On/Off switch, a 3.5mm stereo input jack and a headphone output port, which can output music being played over bluetooth, effectively making the Xenta a large bluetooth receiver. It may not be the most compact machine to have that feature, but it could come in useful. What would have been more useful would have been the provision for USB charging, but you can’t have everything for £40.

As stated, the Xenta Living room speaker was given to a large house of party animals in their final year of university. It was tasked with playing audio from every source available, for every genre available. These included a wide variety of TV shows, music and being the source of entertainment for several house parties.

Perfectly adequate, outperforming the TV’s speakers for a wide range of shows including Game of Thrones, Made in Chelsea and Sherlock Holmes. The only complaint was the delay incurred in Bluetooth transmission, which wasn’t an issue when the audio jack was used.

The house of seven exposed it to wide range of tastes, most commonly chart hits and self made house and garage tracks, as well as 100 hour Nyan cat loops (House politics, don’t ask).

High bass, high bpm and high volume for extended periods. About as taxing as a stress test as could be devised. And the living room speaker has provided noise complaint levels of sound on many occasions.

During its tenure at our friends’ house the Xenta sustained some minor damage: The multifunction dial has been separated from its spline and had to be glued back on, and the right hand speaker now tends to clip at higher levels of bass… And that’s all the damage inflicted upon it. Honestly, I was expecting much worse.

All of the occupants in the house commended the Xenta on its performance, and most resented me taking it off their hands to write up the review. One point that came up multiple times is the versatility that the tone controls provide, allowing the speaker to be tuned to work for bass heavy house parties or milder tones that better suit the speech on the TV shows.

The Xenta LT-201 is a well-designed living room speaker, with good sound quality for its size, easy controls and decent durability.

CES in Las Vegas is a cavalcade of consumer electronics for the year to come, with thousands of products from...

Japanese electronics firm Maxell have released a pair of new speakers for the home. Today, we'll be reviewing...