The Tesoro Lobera Supreme is a mechanical keyboard with an RGB backlight, provided with brown, red, black or blue Kailh switches. Today, I’m taking a look at the blue switch version, graciously provided by Tesoro themselves. Let’s see how this gaming keyboard compares to other mechanicals on the market!

First, a look at the manufacturer’s features and specifications!

n.b. Some of these specifications (e.g. actuation force, responsiveness) appear to be for the brown switch version, instead of the blue switch version I’m testing. For more information on mechanical switches, see this switch guide.

The Lobera Supreme comes in a trapezoidal cardboard box, with a jagged plastic window in the front to show the keys and LED indicator area inside.

The back of the box is more informative, with a host of information in various languages and a demonstration of the keyboard’s major features; most importantly its ‘full color whole zone illumination’, showing the five colours on offer: blue, red, purple, green and yellow. White LEDs are also an option. 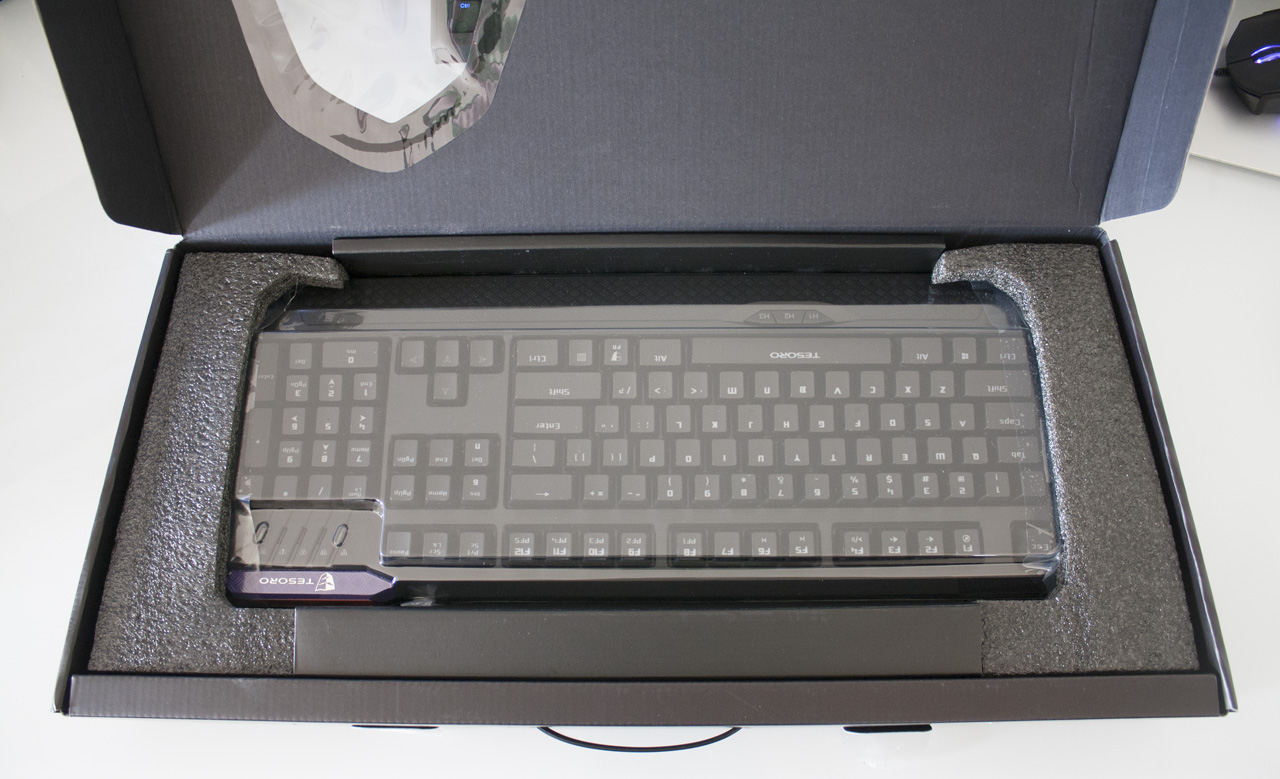 Opening the box, we see that the keyboard inside is very well packed, with foam, a plastic protector and cardboard inserts.

Beneath and beside the keyboard, we get a DC-in to USB cable for providing additional power to the USB port, and two small booklets that encourage rule breaking.

Moving onto the keyboard now, we can see it comes lit by default in a fetching purple colour, which is matched nicely with white indicator LEDs in the upper right and a purple Tesoro logo area. The backlighting is even and strong. The keyboard is an unusual shape, with shaped corners and a bulge on the upper right for the hub. 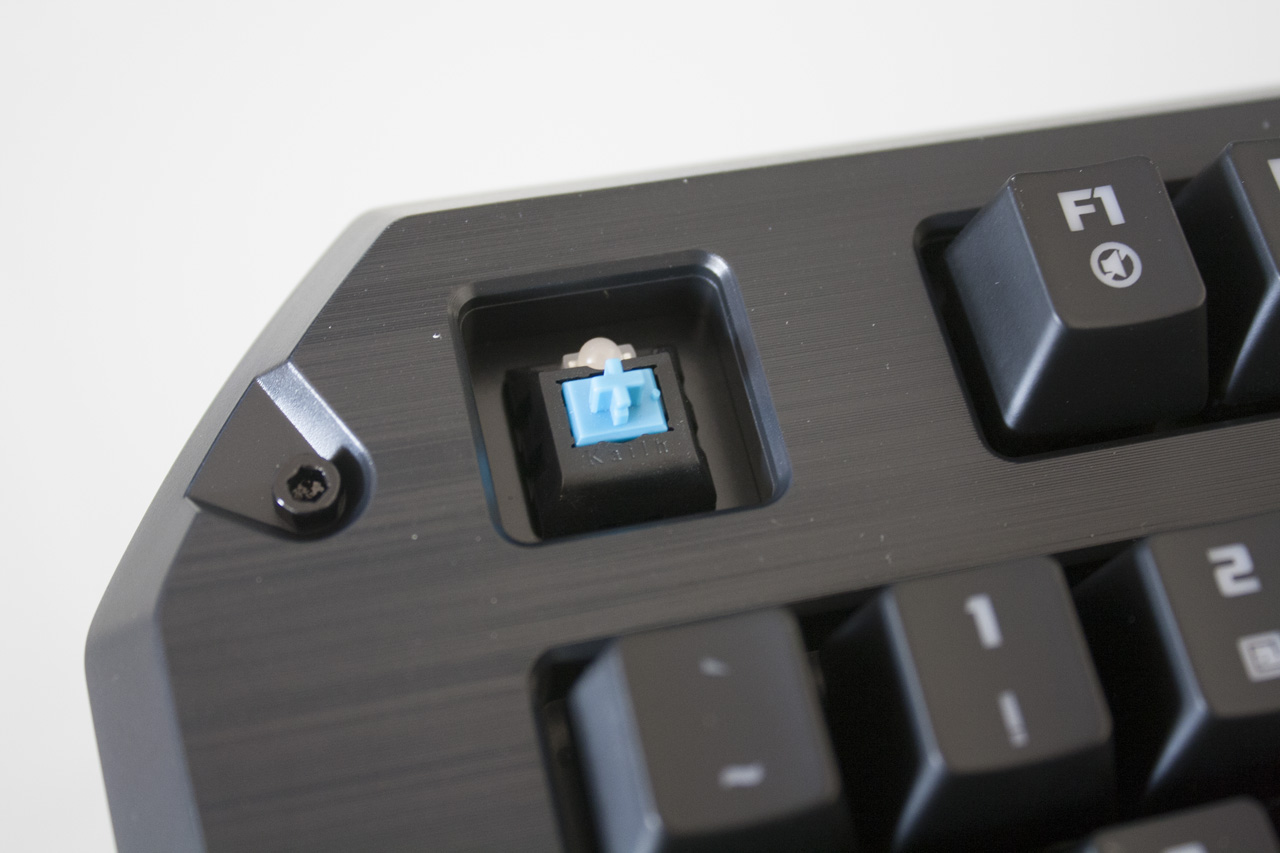 The keyboard uses Kailh switches, essentially clones of the more well known Cherry MX mechanical switch. The two switch makers attempt to adhere to the same specifications and even the same colour scheme, so as expected we find these blue switches both clicky and tactile. The noise from these blue switches is pleasant as always, but may be a bit much for your neighbors at home or at work. 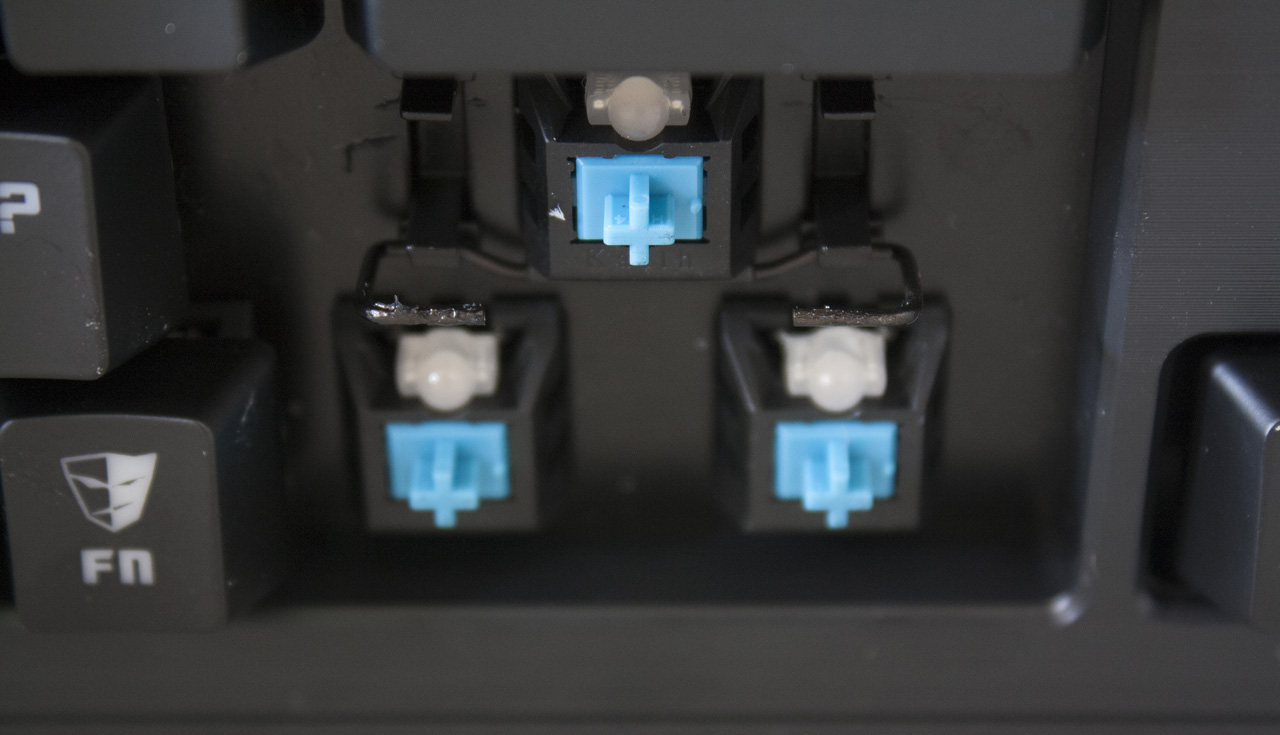 The larger keys are supported by Costar-style wire stabilisers, providing a decent amount of stability although rotation is still quite possible. 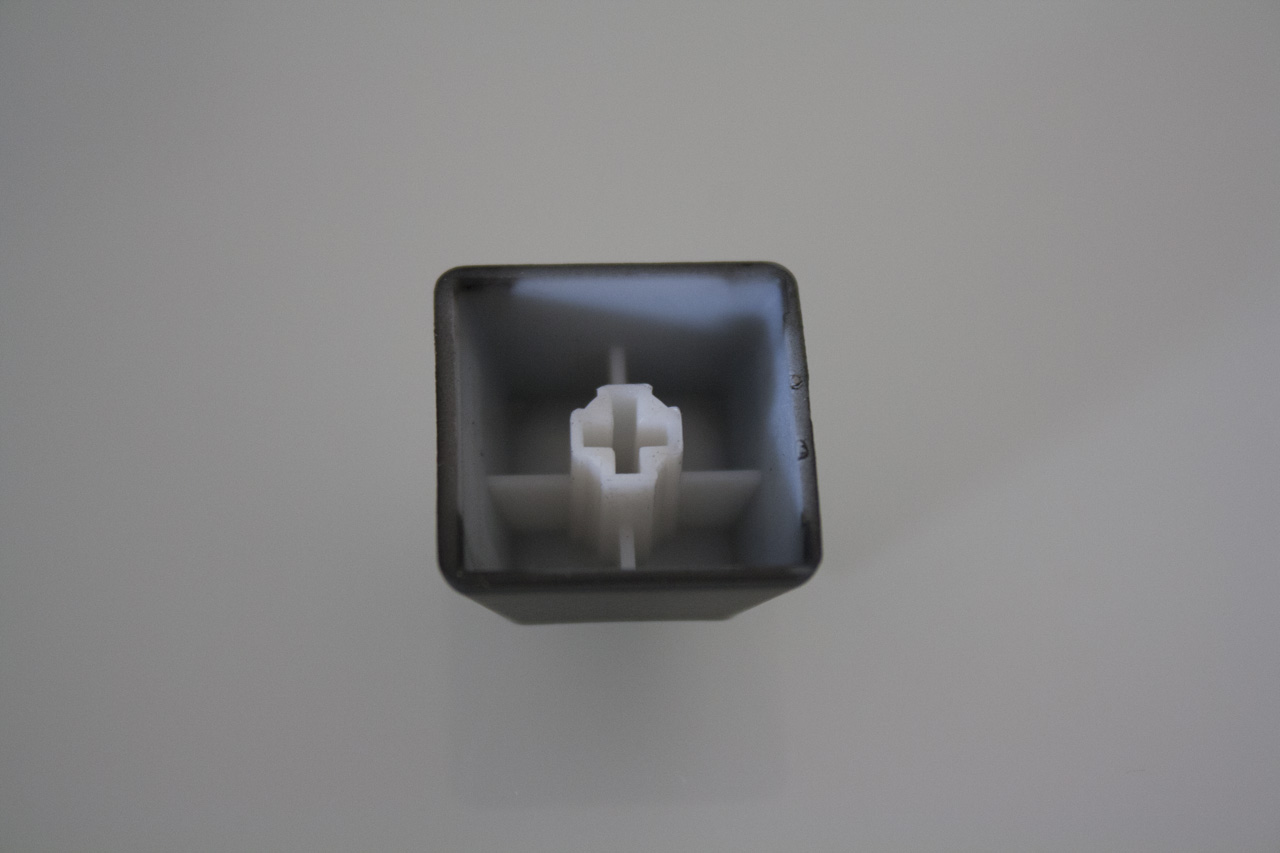 The keycaps are made from thin ABS, with laser-cut legends that allow light through quite efficiently. Like the vast majority of keyboards on the market, the caps are cylindrical, with small bumps on the f, j and 5 (numpad) keys to make it easy to find your typing position.

The most unique keys are these thumb keys, which sit in the sloped palm-rest section of the keyboard. They are designed to trigger macros, but can easily mimic other keys as well. They sit just where I typically rest my hand, so they are quite convenient to press – although they lack mechanical switches behind them.

The indicator area is also home to two buttons: a ‘G’ for game mode (disables the Windows key) and a ‘R’ for record macro. You can also just see just a hint of the orange warning label that covers the hub, stating that only 100mA of charge is supplied without the DC-in adapter inserted. 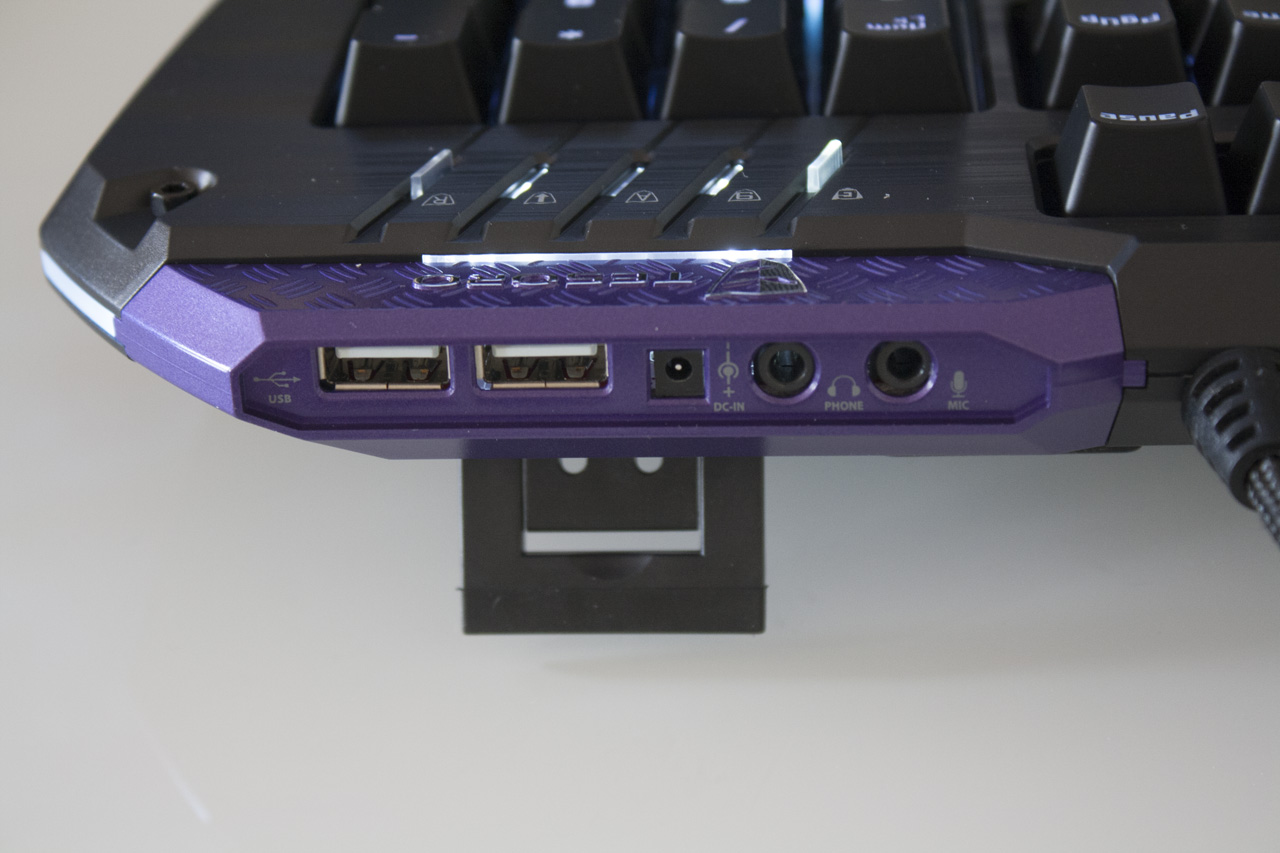 The hub is quite comprehensive; you get two USB 2.0 ports, the aforementioned DC-in option and both headphone / microphone audio passthrough ports. 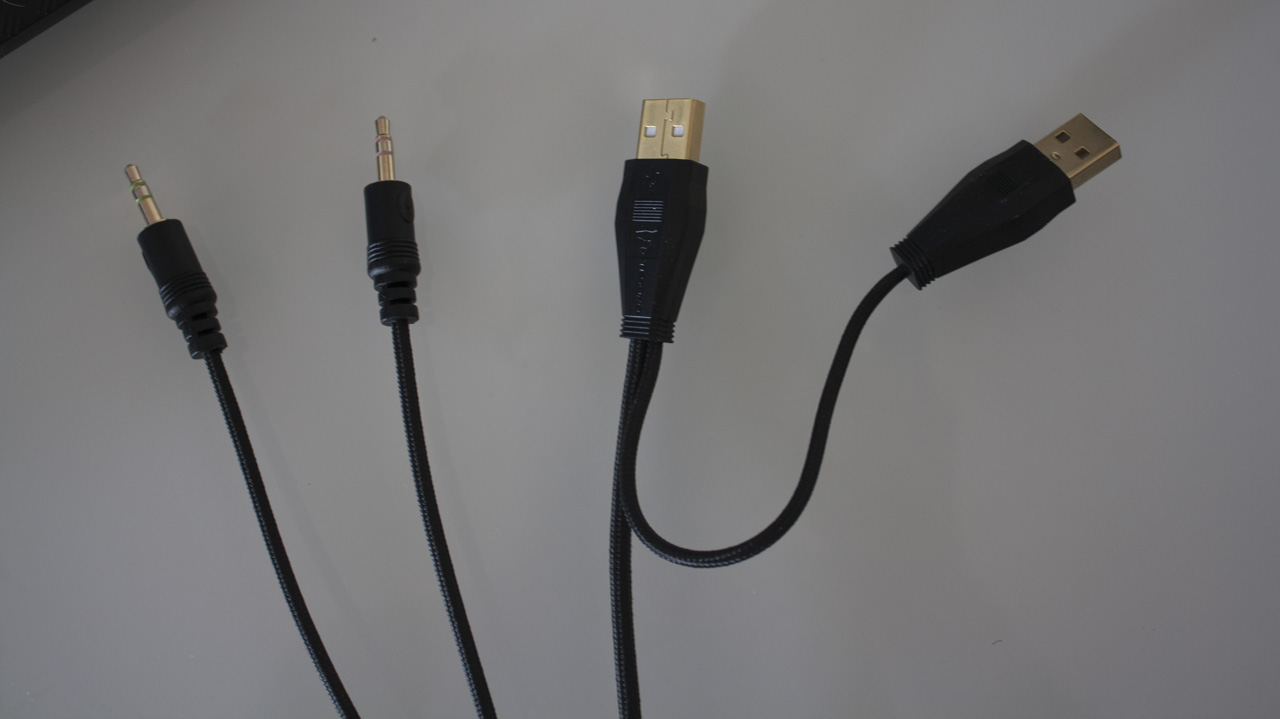 Of course, these ports work because you plug in two USB ports and the two audio jacks into your PC… so you’re not gaining any ports, but you are getting the convenience of plugging things into your keyboard instead of the remote back of your PC. 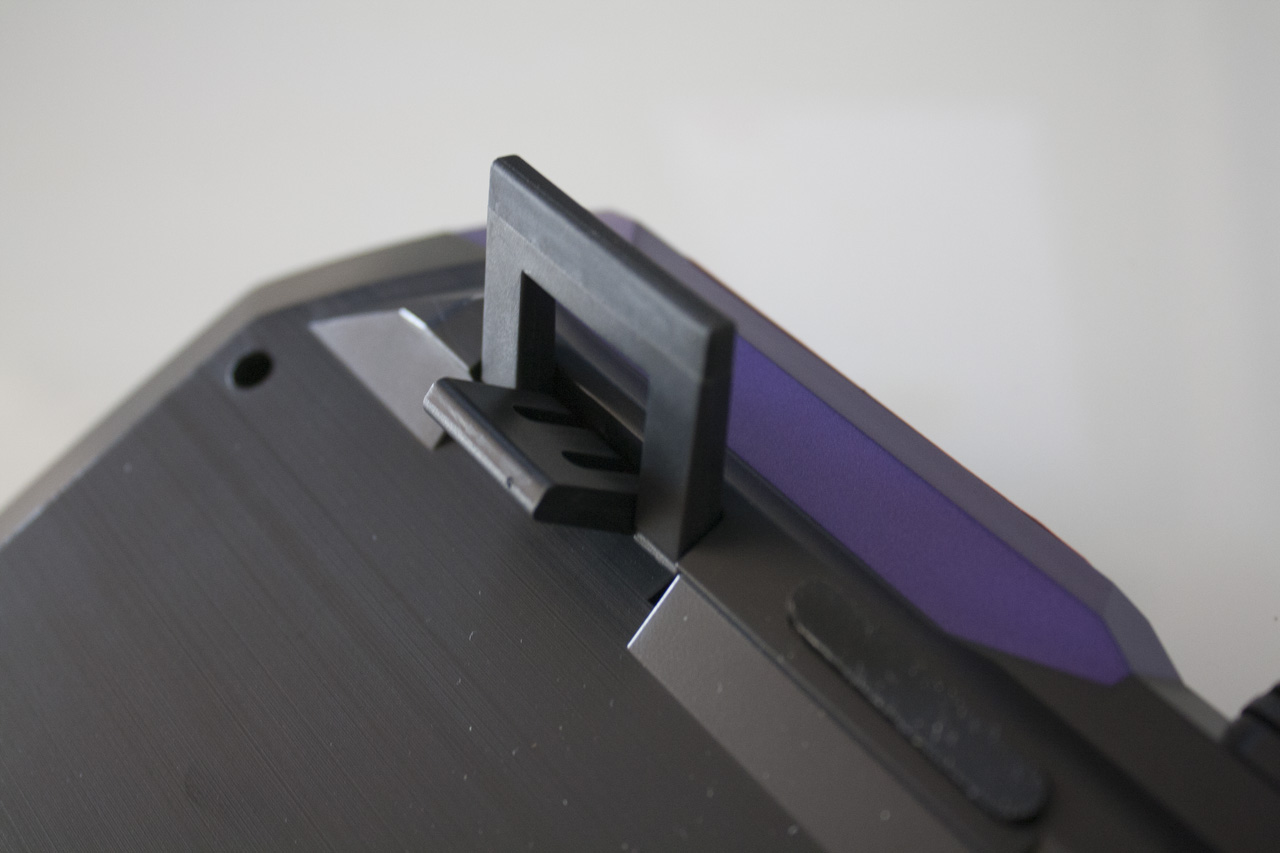 Another convenience are the feet, which come with two parts to allow for three potential angles (flat, low and high). 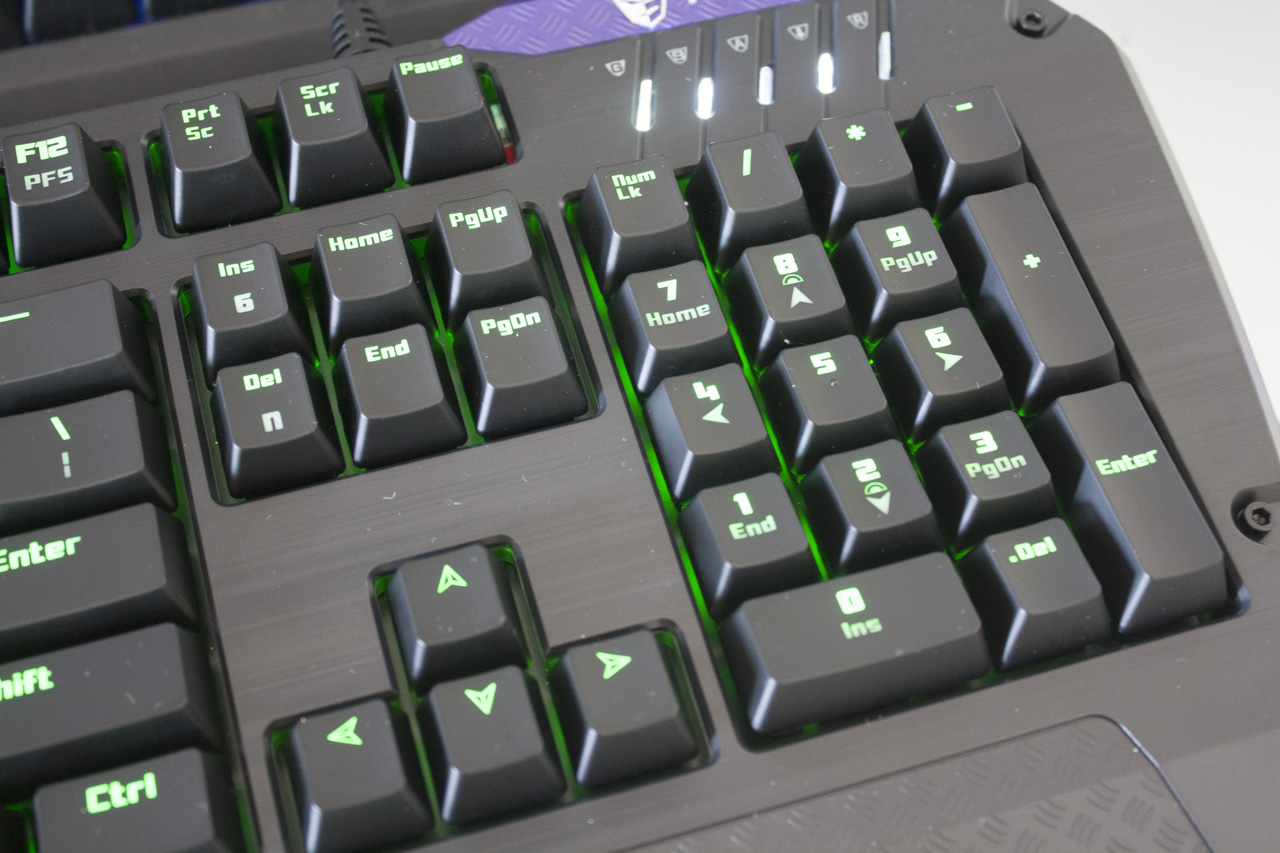 The backlighting seems well done, although many of the colour schemes clash a bit with the purple decorations in the upper right – for that reason, a more neutral logo section would have been better. 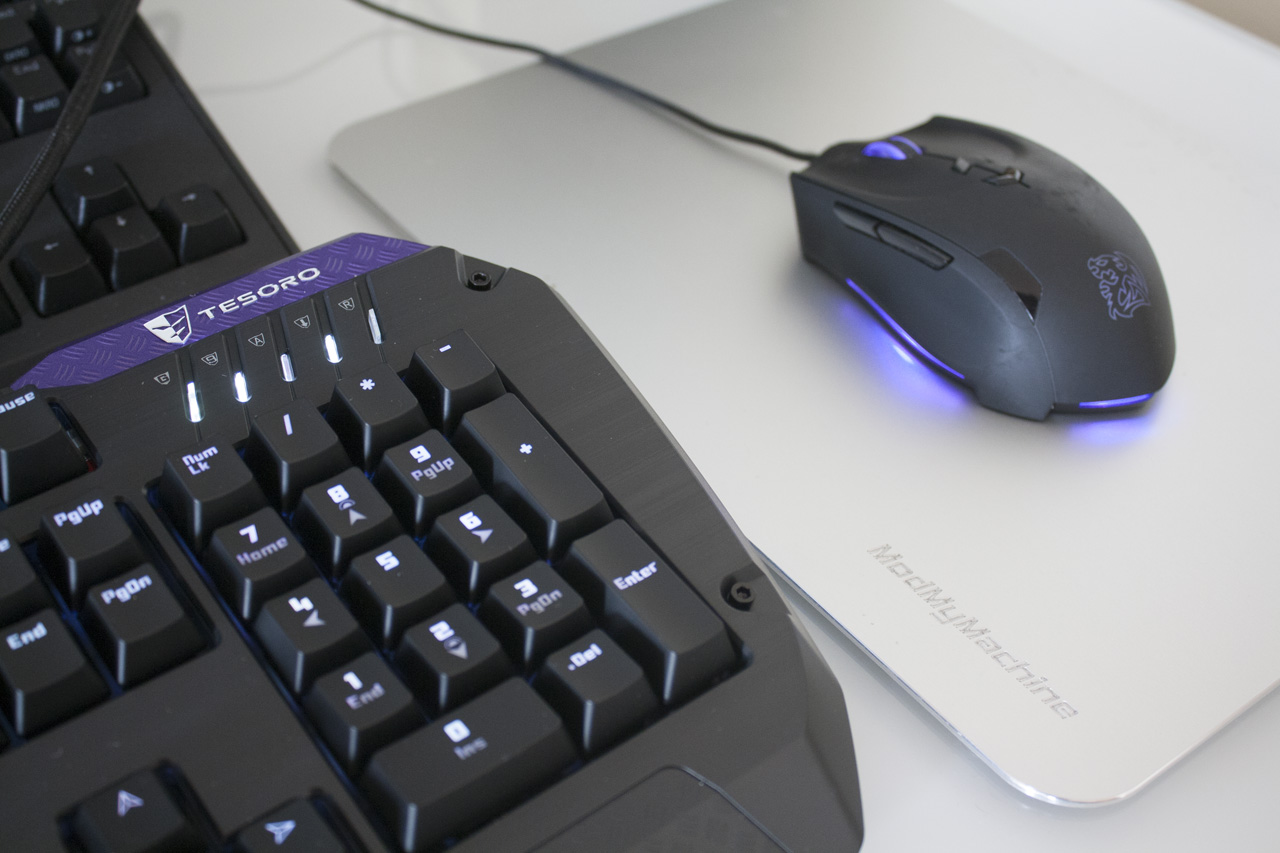 In purple or white mode though, this problem is neutralised. The keyboard looks particularly nice with a matching mouse, although you’ll likely need a mouse with full RGB capabilities to select the correct shade.

I used the Lobera Supreme for a period of about three weeks, in order to fully test its capabilities for both writing and gaming (two things that I spend a lot of time doing). This included playing StarCraft II, Counter-Strike: Global Offensive, Diablo III, Civilisation V and writing many thousands of words.

For writing, blue switch keyboards are often recommended. It’s a switch that I haven’t used for some time (since I had an original Razer BlackWidow and Das Keyboard, in fact), so it was nice to return to the switch. I was curious to see how the Kailh switches compared to their Cherry counterparts… and to be honest, I didn’t notice any difference. I have heard that the Kailh switches sound a little different and are made to worse tolerances, but I wasn’t able to find any substantive difference.

The Lobera uses a near-standard layout; the only noticeable difference was the 1x size Windows key (instead of the usual 1.25x size). This didn’t turn out to be an issue, although I slightly prefer to have a larger Windows key for aesthetic reasons. Ultimately, I found the Lobera a reasonable keyboard to type on. The backlighting was helpful as always for typing in the dark, although after you’ve centred your hands the light is largely superfluous – at least until you need to find a little-used symbol.

An important part of writing for me is listening to music, so I was happy to see media keys included. These are quite useful to skip tracks or mute the sound quickly, although dedicated buttons and knobs always beat buttons in a Function layer in terms of speed and convenience.

I also find myself connecting a fair few peripherals to my PC, so having the extra USB ports was another help. The keyboard proved unable to power anything more than a mouse though, and I found the DC-in cable an unsightly and unwanted addition. Many other keyboards do manage to power USB drives and SD card readers using just a USB connector or two, so it was disappointing to see the Lobera unable to fulfill this function.

Gaming on blue switches is sometimes cautioned, but I largely believe it’s a matter of preference. Generally, I found the switches behaved reasonably in games, particularly in RTS titles where accuracy trumps speed. Blue switches are a little less useful for FPS titles, as they make it a little harder to double tap, but are still a considerable boost over scissor switches or rubber domes. One downside is the noise that they create, which can easily be picked up by webcams or headsets to annoy other players online – to say nothing of anyone actually in the room.

The macro recorder button worked well enough to create in-game macros, although I generally found myself doing without them unless I made a particular effort. Regardless, the system is there if you want to use it.

A full-size keyboard obviously allows you to use more keys than a tenkeyless board, but you pay the price in terms of posture – your hands are forced further apart. I prefer a Tenkeyless board for this reason, but the Lobera wasn’t too egregiously large (unlike the titanic Corsair K90, for instance).

All in all, gaming on the Lobera was perfectly enjoyable.

The Tesoro Lobera is well made keyboard, with a small number of useful additions and no upsetting deviations from convention. The backlighting is pretty, the thumb macro buttons serve their purpose and both media keys and hub are useful. The Kailh mechanical switches at the heart of the keyboard held up to their more well-known Cherry peers in my testing, although I still have some doubts as to their long-term reliability. Ultimately, the Lobera is worth considering if you’re looking for a backlit gaming keyboard and don’t mind an alternative to Cherry switches.

I think it’s reasonable to note that Kailh switches are unproven. Cherry switches have been used for almost 30 years, and have generally proven to be reliable, able to last for 20 years or more without issue. Kailh switches are (lawful) clones of the switch that have arrived on the scene more recently, so they don’t have that long-standing history. It’s quite possible that they will gain a similar sterling reputation for longevity, but it hasn’t happened yet.