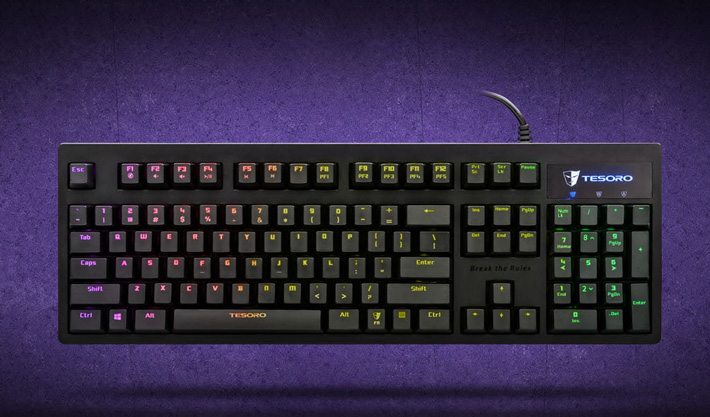 Tesoro have been on a tear recently, rapidly improving their mechanical keyboards with the latest technologies while maintaining a competitive price point. We first looked at the Excalibur, their no-nonsense gaming keyboard with a traditional design and static one-colour backlighting. They then followed that up with the Excalibur RGB, which allowed you to choose from a range of colours for the backlight. Now we’ve reached the ultimate form with the Excalibur Spectrum, which allows you to choose each key’s backlight colour individually to make the keyboard of your dreams.

I’m excited to see how the Excalibur performs and how much of a difference the new backlighting system makes, so let’s move right into this review!

The Excalibur Spectrum has the same external appearance as its predecessors, with a traditional keyboard layout and a plain rectangular design. The big difference are the LEDs embedded on each key and the on-board controller, which allow for the headline feature: per-key LED colour settings.

With the lights off, the Spectrum looks quite ordinary, with only a few small details that set it apart from the crowd. We have a unique Tesoro logo keycap for Escape, ‘Break the Rules’ inscribed above the cursor keys, and the Tesoro logo in the upper right corner of the keyboard.

With the LEDs on and a suitable setting  (I’ve gone for the wave mode), you get quite a light show. The original RGB model could be set to any single colour, but the Spectrum impresses with a full rainbow on display.

With the lights out, it’s a beautiful look. 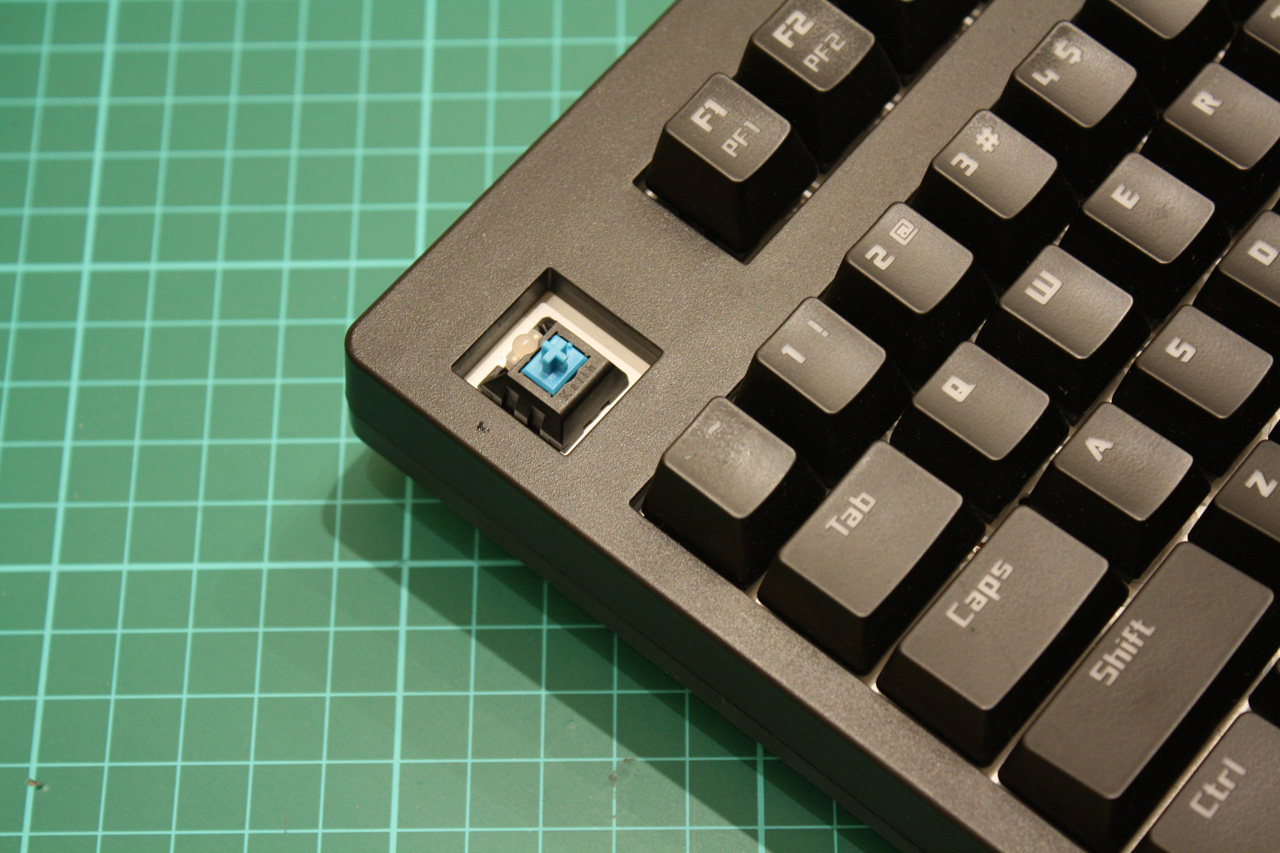 The keyboard comes with a choice of three Kailh switches, which are made to the same specifications as the more well-known Cherry MX switches. I’ve got clicky and tactile Blue switches, but you can also pick up tactile Brown switches or light Red switches. 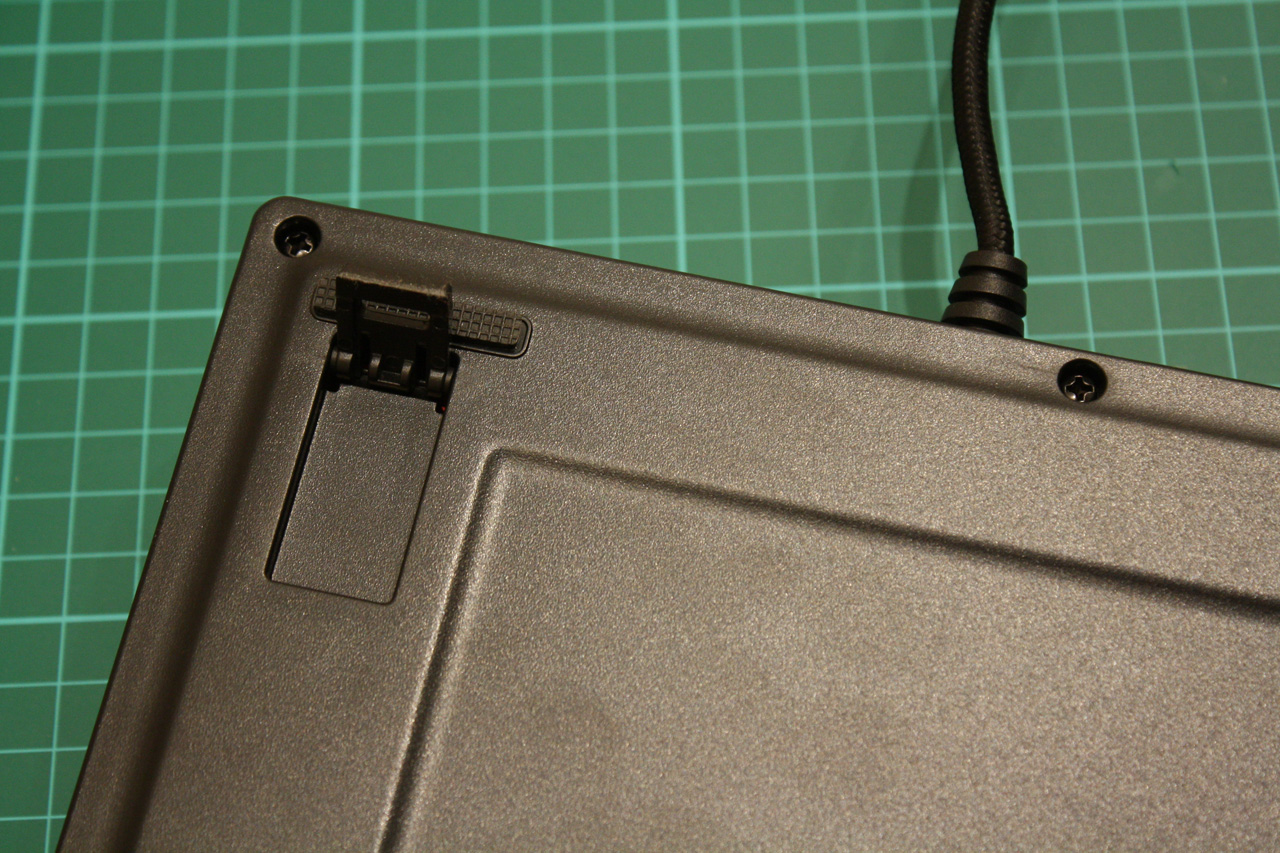 The bottom of the board is quite standard; we’ve got the standard plastic legs to add a bit of elevation to the back of the keyboard, plus a nicely reinforced mesh cable. 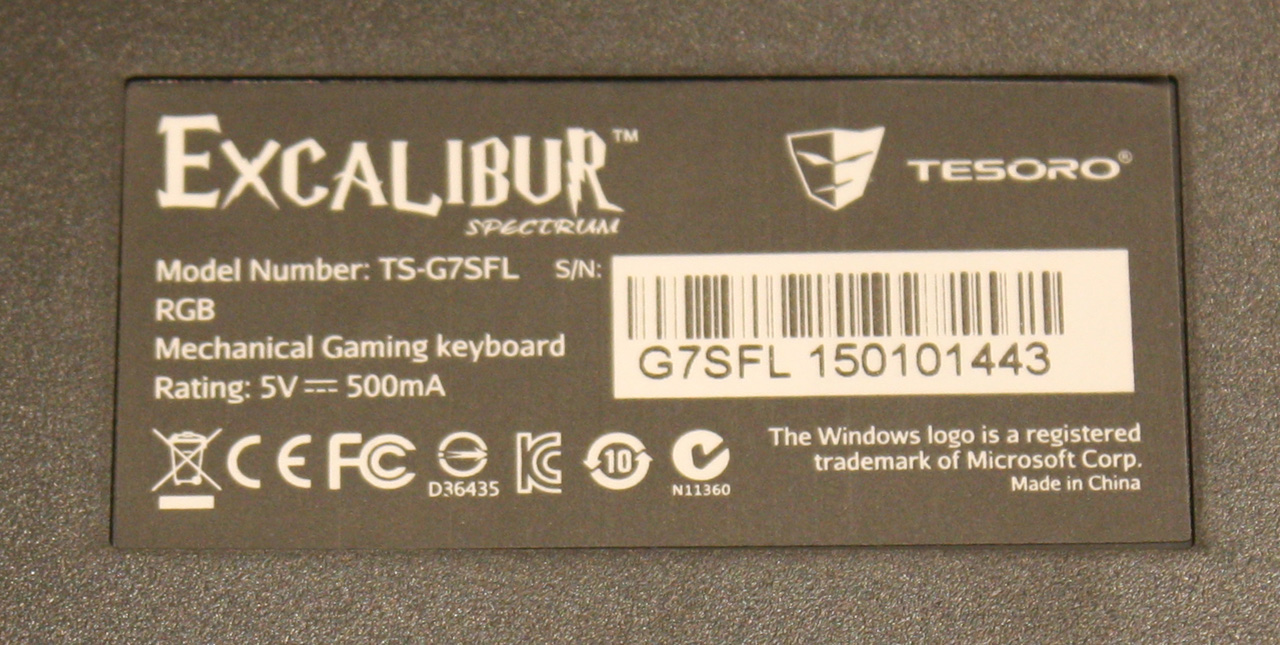 This is the TS-G7SFL; interestingly the RGB name is still used here (even though ‘Spectrum’ is crammed into the bottom of the Excalibur logo). 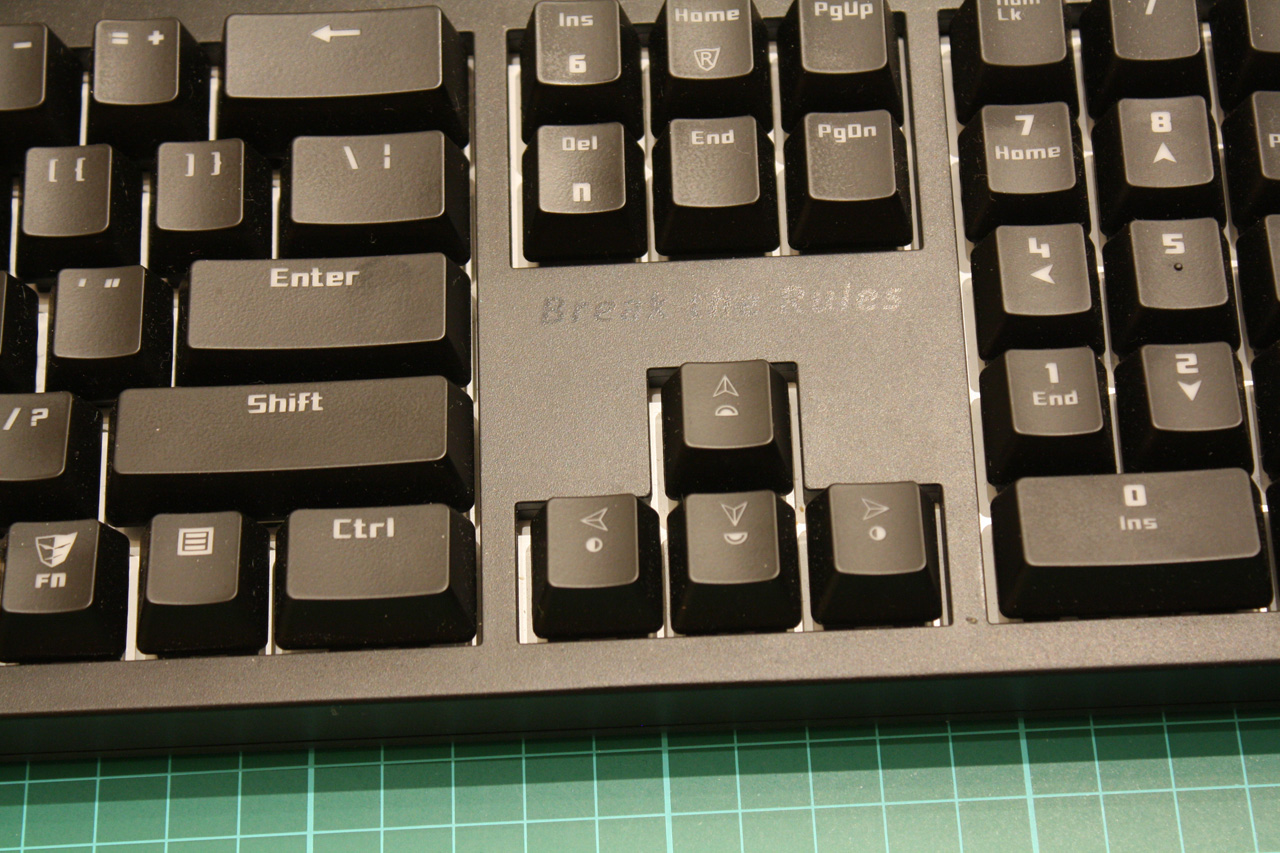 The keyboard includes some ancillary controls for changing between different backlighting modes and brightness levels. Up and down for brightness control, left and right to select a different mode. You can also change between 6KRO and NKRO settings (Fn + Ins/Del), change profiles (Fn + F1 – F5) and control media (Fn + F6 – F12).

The major feature is the per-key RGB backlighting, so let’s look at that first. You’ll start up the Tesoro software to set up your profiles (which is confusingly labelled with the Lobera logo, Tesoro’s other mechanical keyboard). 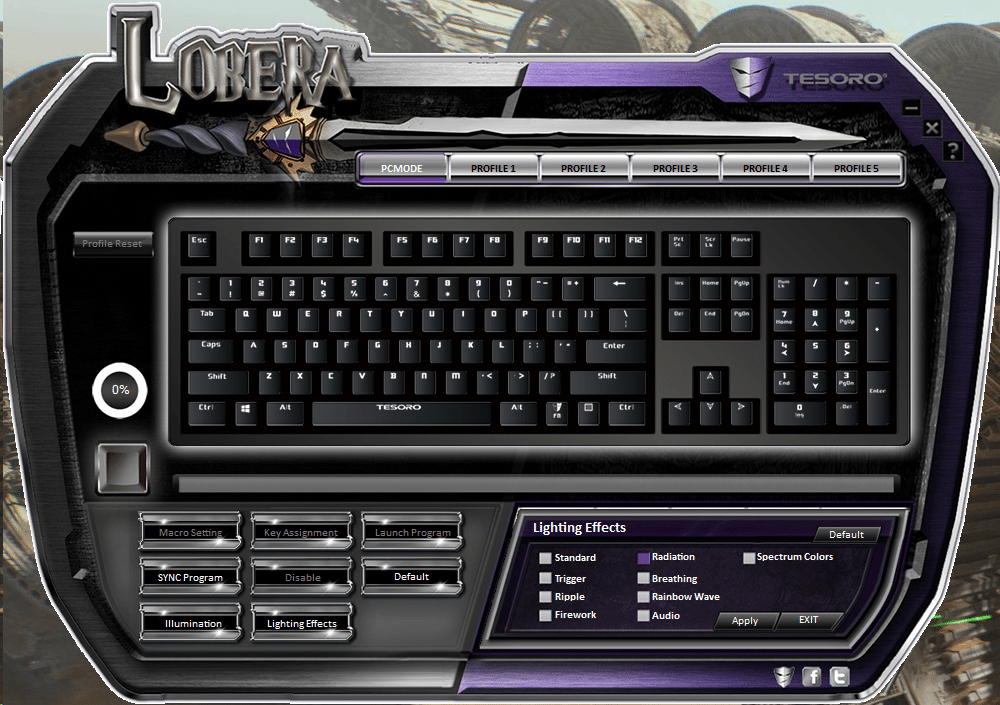 As you can see, there are a range of lighting effects to choose from, most of them beginning with the keyboard unlit and then lighting up as keys are pressed:

Outside of the Lighting Effects section, there’s an Illumination section which just lets you set the colour used for the current effect. You can input an RGB value directly, select one of nine suggested colours, or select from a wider range of colours.

Each of these effects can be applied to one of six profiles; PC and numbers 1 to 5. You can use the Sync Program button to automatically load a profile when you launch a specified program. For example, you could set up a profile that lights up only the keys used in Counter-Strike, then have that profile triggered when the game starts up.

In order to test the Excalibur RGB, I used it as my primary keyboard for two weeks. That included a lot of writing (including the entirety of this review) and a lot of Counter-Strike: Global Offensive. Other games included Besiege, Pillars of Eternity and Trackmania 2.

I was fairly outspoken in my criticism of the Tesoro Excalibur RGB, as its lack of per-key backlighting control really hamstrung what was otherwise a solid keyboard. This time around, all of the functionality I could ask for has been included. You can set up layouts to suit specific games and have them loaded automatically, use RGB values to specify exact colours to be used, and there’s always the option to indulge in the rainbow insanity of the wave mode. If you want a colourful keyboard, then you don’t need colourful keycaps – just get the Tesoro Excalibur Spectrum and go wild. The software provided still isn’t the best on the market (I prefer Razer’s efforts, for example), but it certainly does the job well enough. 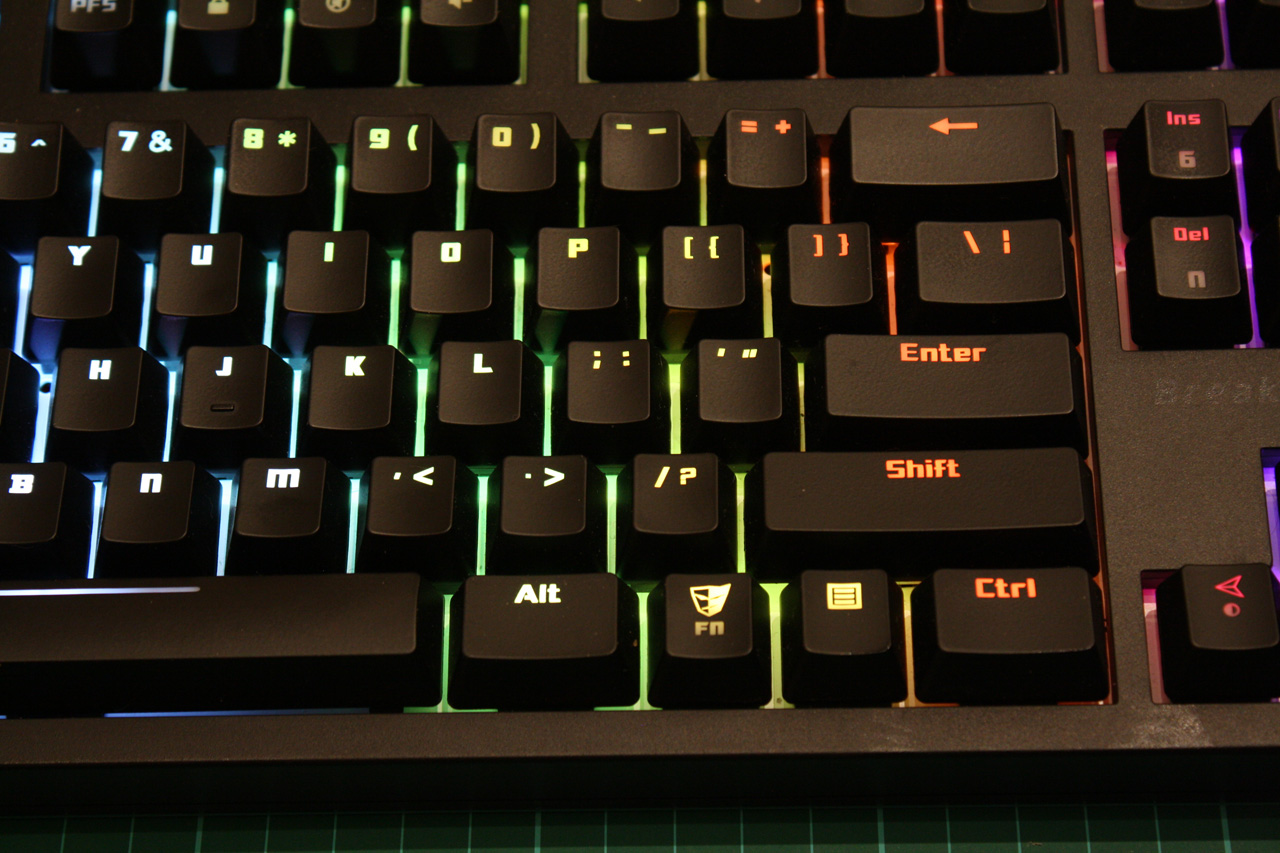 The Excalibur Spectrum is a great typing keyboard, just like its predecessors. With a standard layout, solid construction and a choice of switches, there’s little to complain about here. Some of the triggered lighting modes are more distracting than helpful when it comes to writing, but the choice of which to use remains yours. I had no issues writing on the Spectrum, and found it comfortable throughout.

When it comes to gaming, the Spectrum doesn’t disappoint. The addition of per-key backlighting controls allows you to set up helpful lighting effects for different games, which can be handy if you’re learning the controls for the first time.

The only issue I really faced was that the legs on the back of the keyboard simply folded up if I pushed the keyboard forward accidentally, meaning I had to re-deploy them before I could use the keyboard again, distracting me for a few seconds. I had the same issue with the earlier Excalibur models, and it would be nice to see a fix for this minor problem – for example, by increasing the angle at which the legs rest or making them a bit stiffer.

Otherwise, I had no issues gaming with the Spectrum. It proved reliable in the most stressful competitive Counter-Strike matches too, with the predictably crunchy Blue switches providing great feedback. 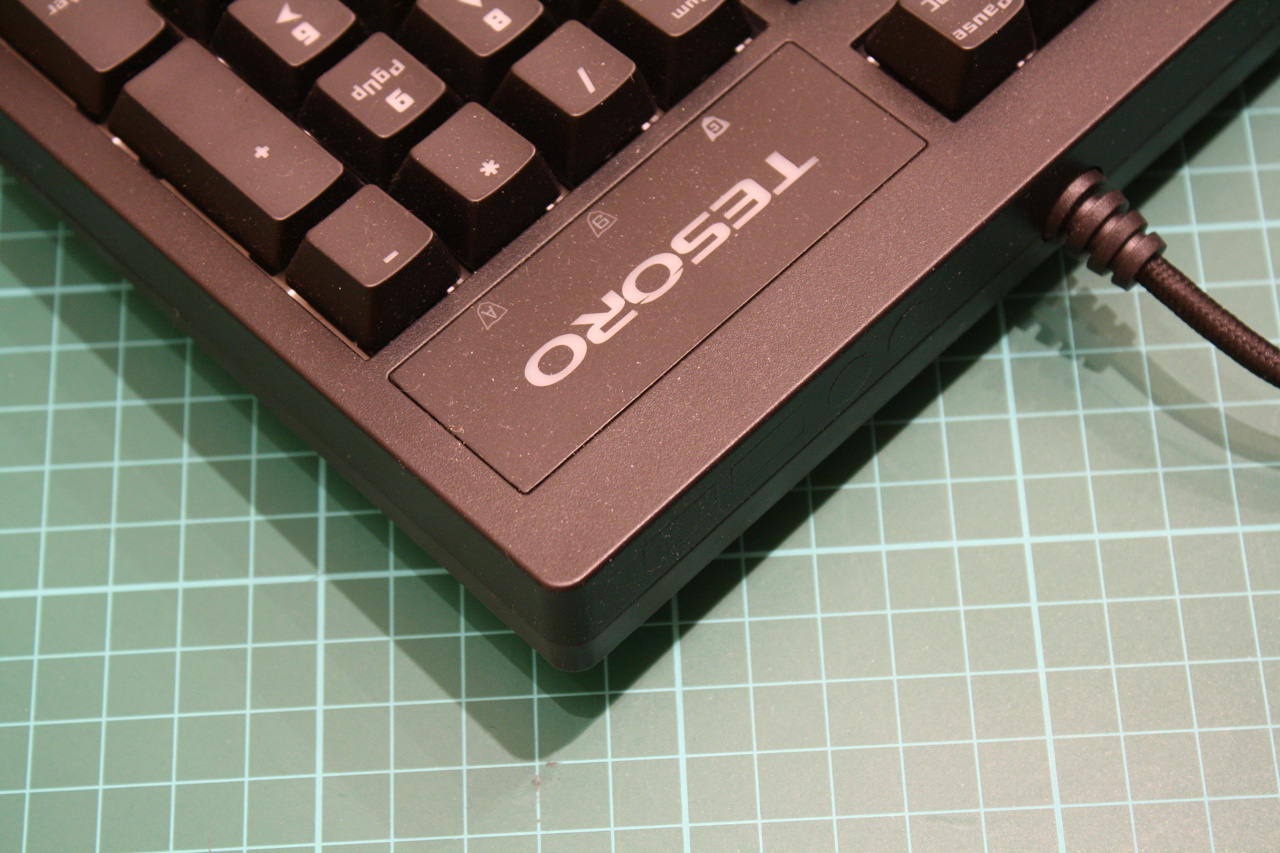 Unlike its predecessors, the Tesoro Excalibur Spectrum is a true RGB gaming keyboard keyboard, providing a host of fun and useful backlighting controls. When combined with the keyboard’s solid construction and reliable mechanical key switches from Kailh, it’s an impressive package for a reasonable price.