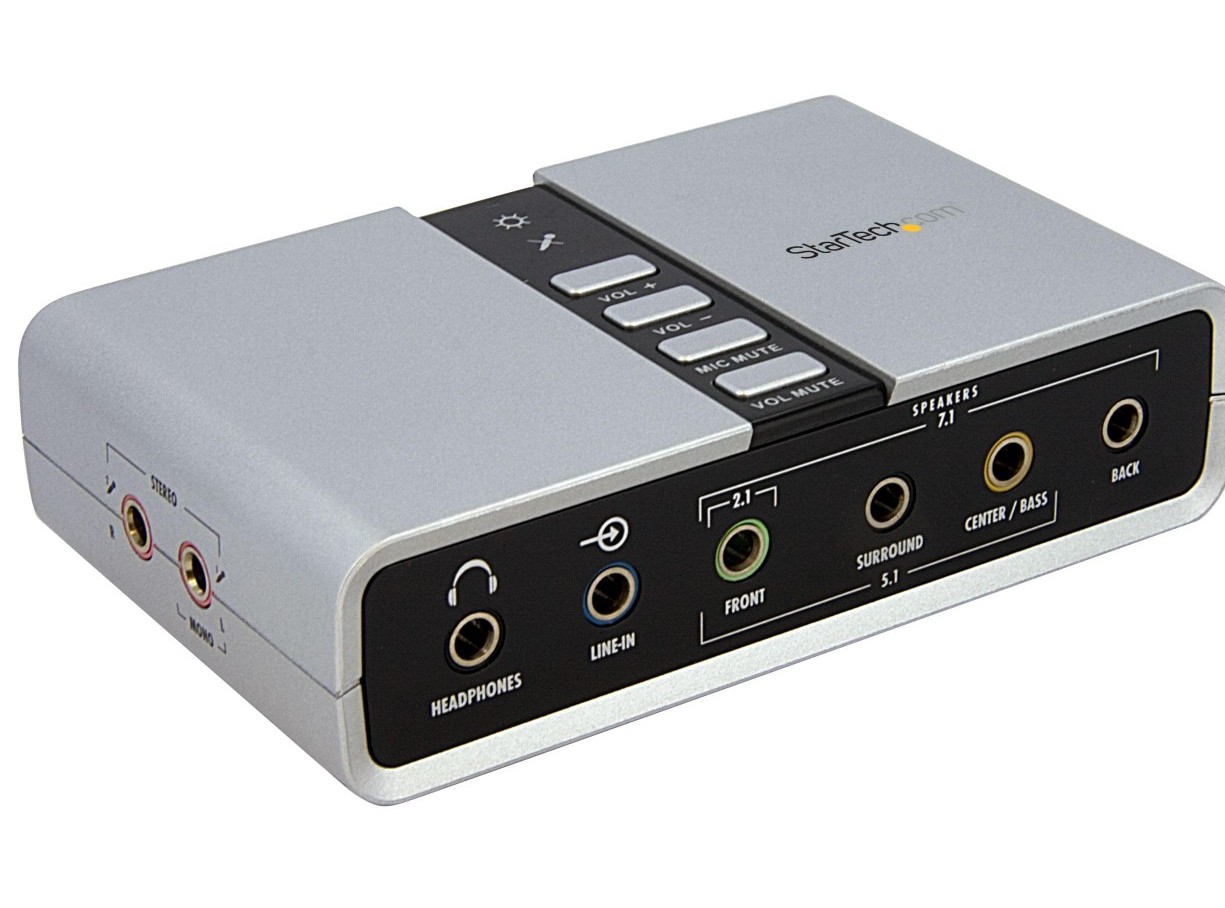 Today we’re looking at a 7.1 USB sound card from StarTech.com. USB sound cards are ideal as replacements for broken on-board sound cards, particularly on laptops or small factor systems where installing a PCI or PCI-e sound card isn’t a viable option. This one is a good-sized unit, offering a range of analogue and digital ports including analogue 7.1 surround sound, dual-mic recording and an S/PDIF passthrough.

StarTech.com’s USB sound card does exactly what it says on the tin, providing a strong range of inputs and outputs in a relatively small package. Installation takes seconds, comprising of little more than plugging everything in and waiting for the drivers to install, then setting a new default input / output device in Windows. While the limited S/PDIF interface is unfortunate, there are no other issues to preclude us from recommending this USB sound card.

Let’s take a look at the ports provided by the StarTech.com sound card.

On the front, we have the bulk of the connections: six 3.5mm ports. The first is a headphone output and the second is a line-in port. The remaining four allow for connection of an analogue 7.1 system; if you have a 2.1 or 5.1 system then of course you’ll use a subset of these. 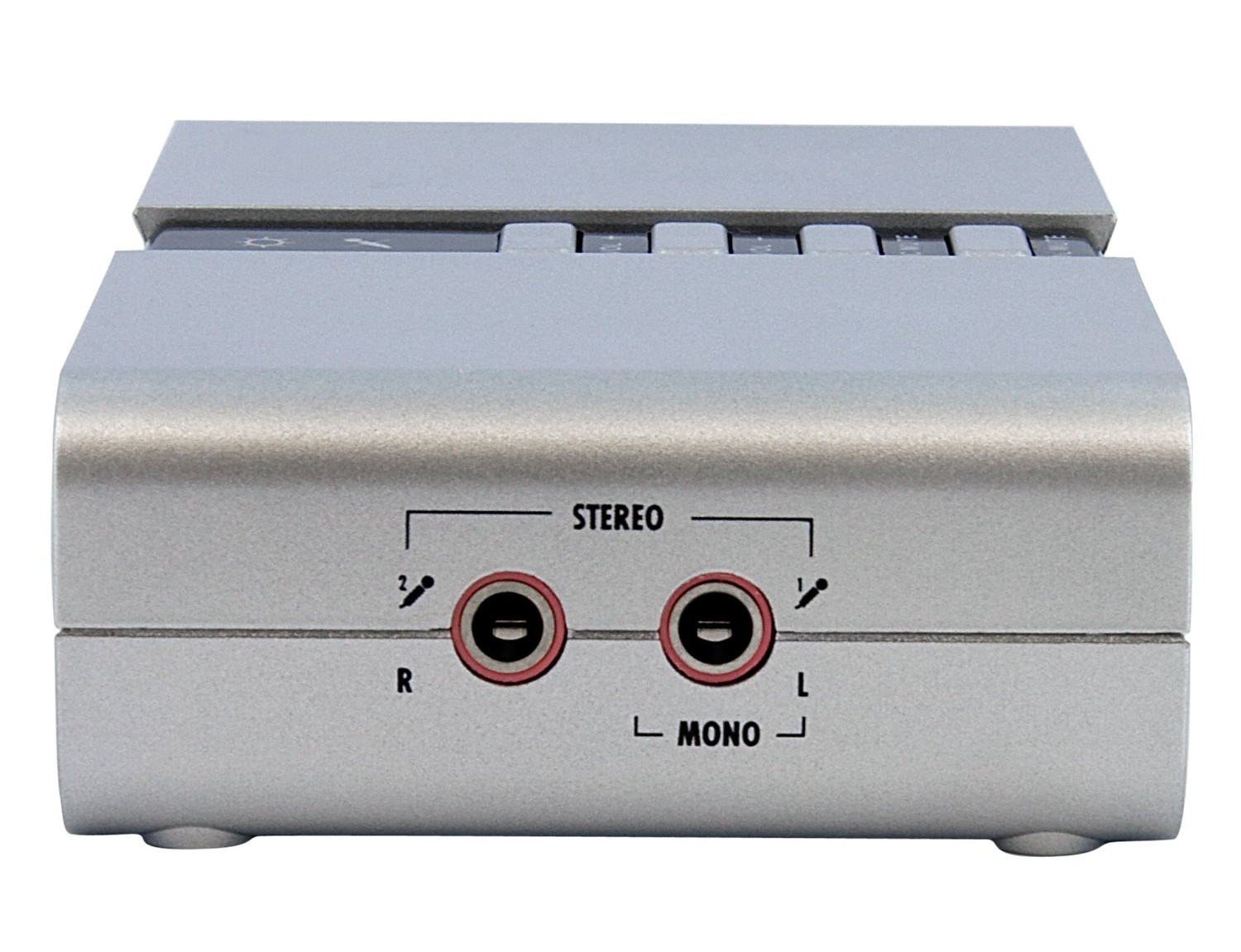 On the left side, we have a pair of microphone inputs, one each for the left and right channels. If you’re just using a single 3.5mm input, you just use the left channel. 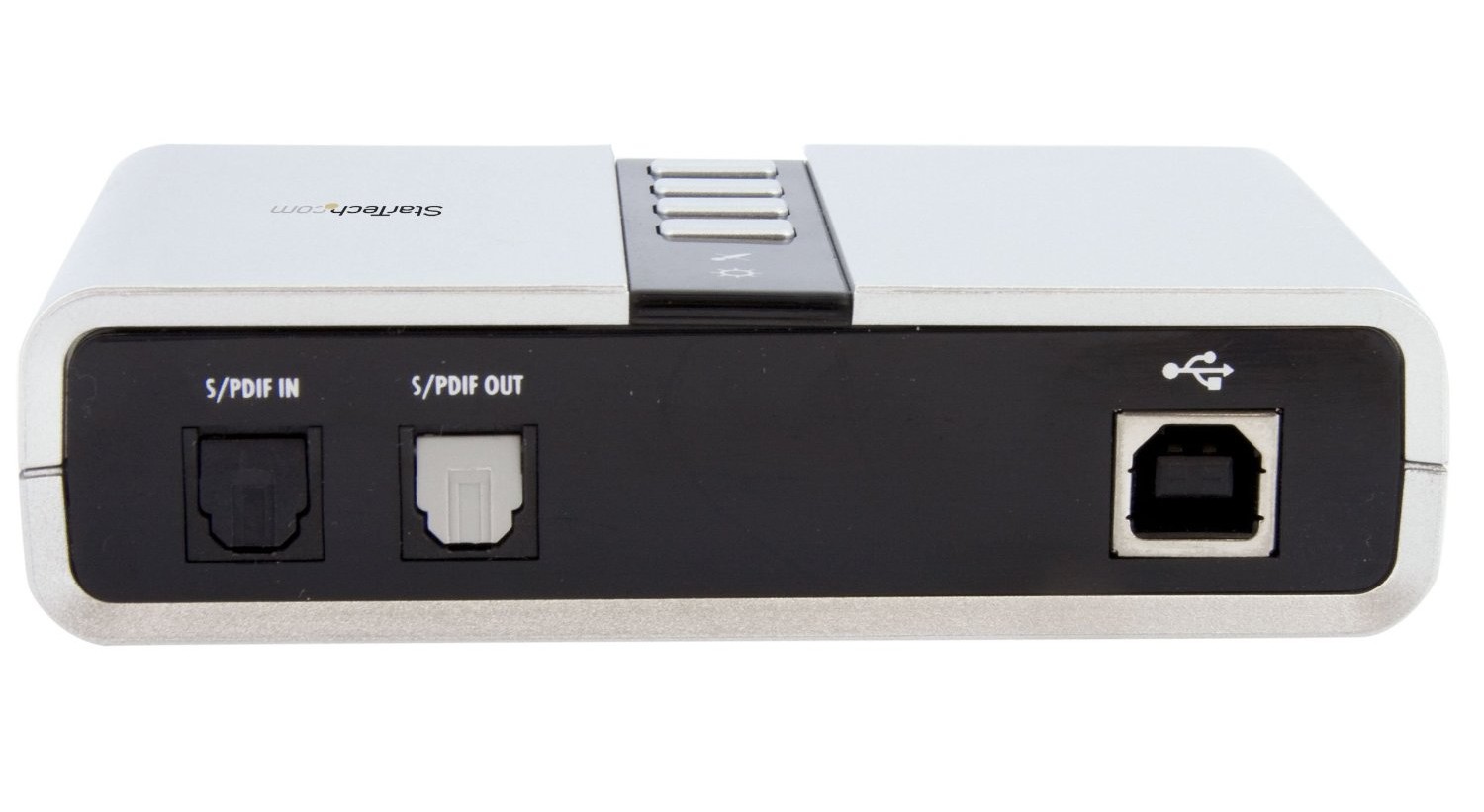 On the back, we have the USB input (the square connector often used in printers). This cable is provided in the box. We also have the S/PDIF passthrough interface, comprising of one S/PDIF out and one S/PDIF in. 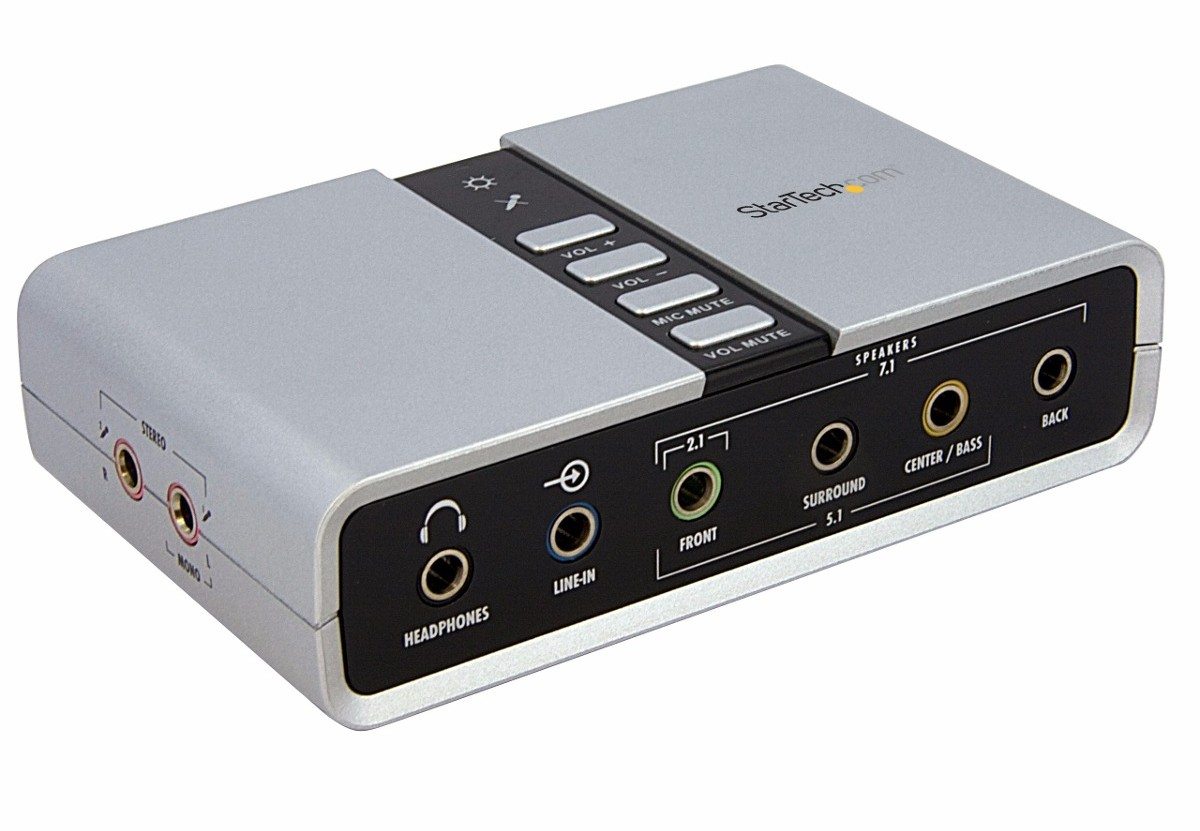 On the top of the unit, we have some indicator lights and buttons. The first light flashes (dimly and slowly) while audio input is detected, while the second activates when the microphone is muted. The buttons allow for adjusting the volume (up, down, mute) and muting the microphone. 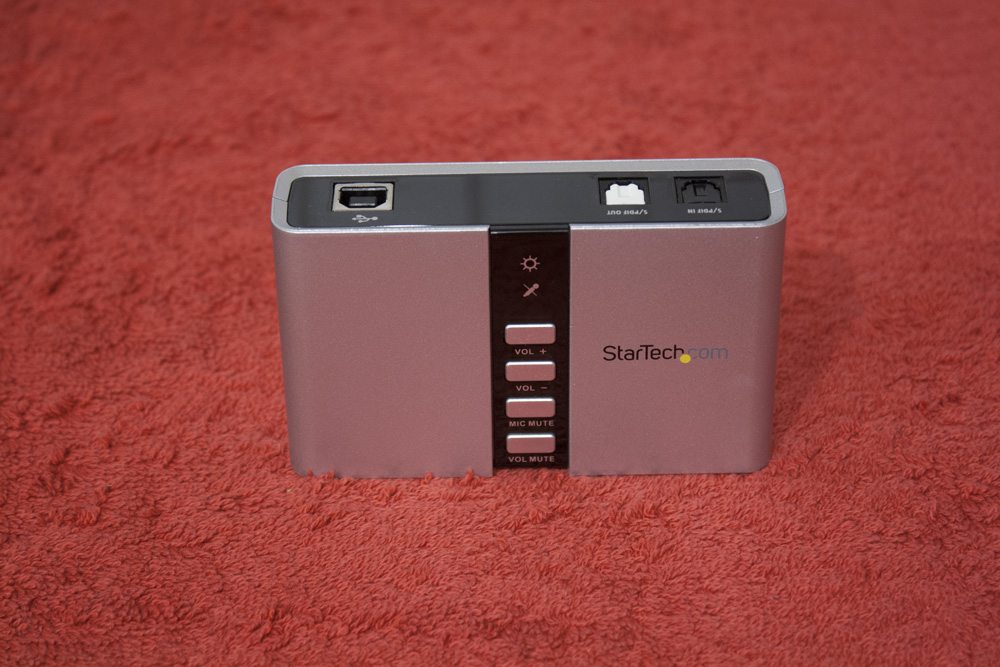 It’s a fairly compact piece of kit, although it is larger than simpler USB sound cards that have just one or two 3.5mm ports. It does well sitting on a desk, but pulling it out on the train might be a bit of a hassle. The silver colour is inoffensive, and thankfully the LEDs are too. After tucking it under my monitor, I didn’t notice it too often.

The StarTech.com 7.1 USB Sound Card provides a good initial impression, with its plasticky frame providing all of the ports you could need in a logical arrangement. Plug the provided USB cable into your PC, connect up your headset and speakers, and wait for the drivers to install (a CD is provided). Once you set the USB sound card to be your default audio device, everything just works. 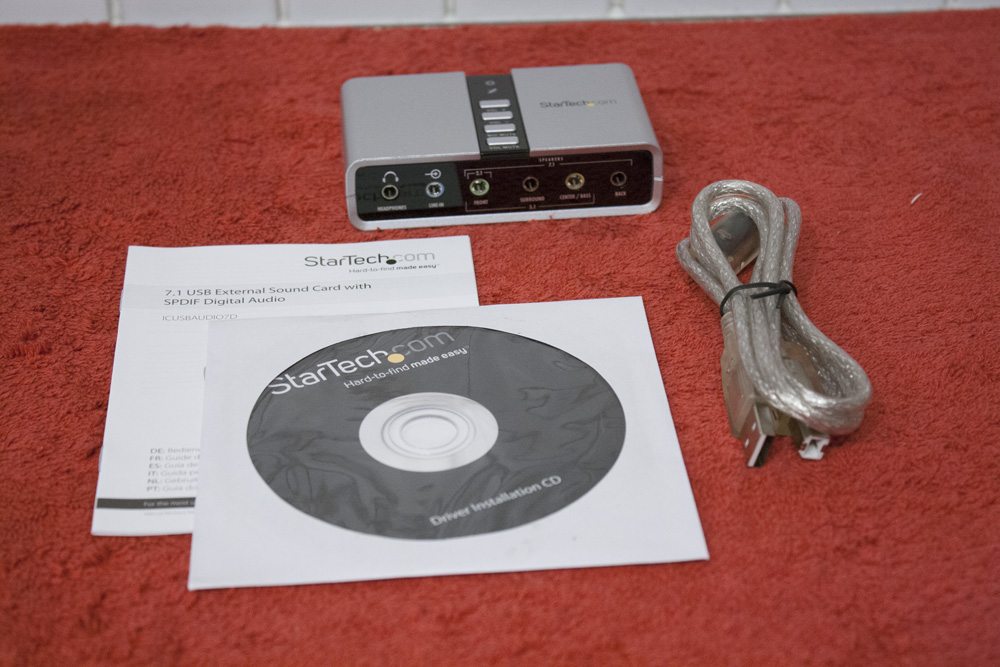 I’m a big fan of the headphone output, which allows me to switch between headphones (for competitive gaming) and speakers (for music and videos) without plugging or unplugging anything. I spent my life unplugging and re-plugging my headphones with the Creative T50s, which definitely got wearisome after a while. Here, it’s just a case of putting the headphones on your head and turning off the speakers, and you’re away. The only better implementation would be a switch on the sound card that lets you toggle which output is used, so I don’t have to keep turning my speakers on and off each time. 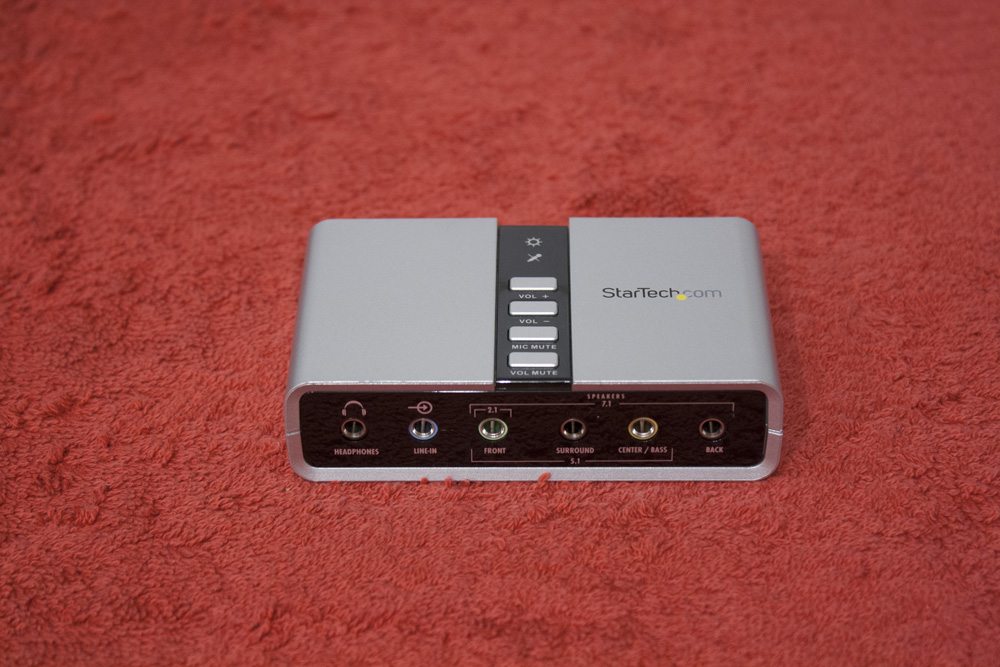 The microphone inputs are sensible enough, although I feel the quality isn’t as clear as it could be. I had no issues using the microphone input for chatting to my mates when gaming, but I might look for an alternative for professional recordings. 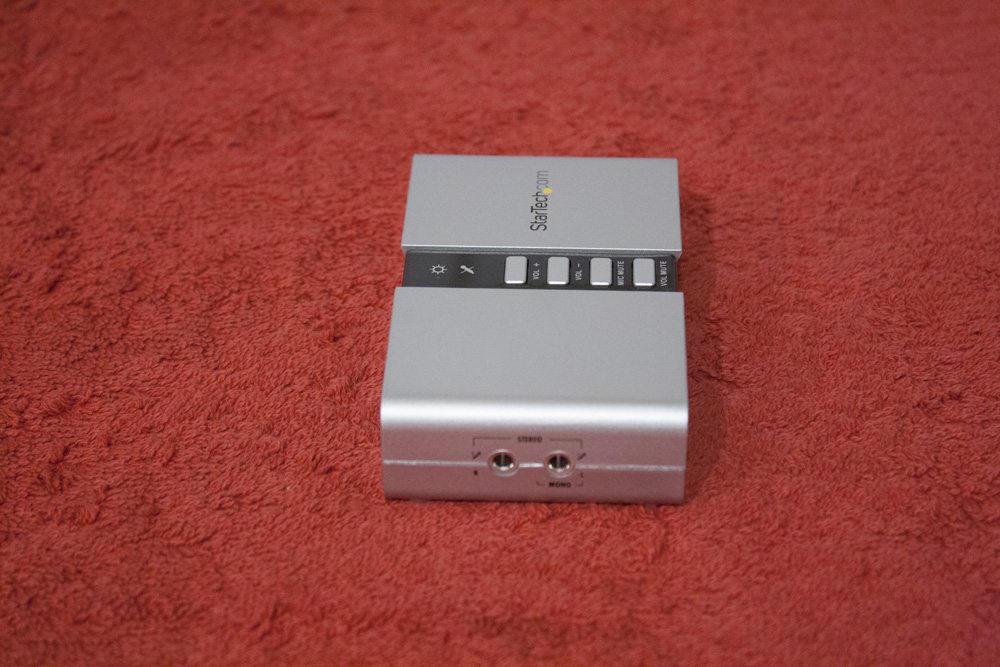 There’s no software provided with the sound card, so you’re given no way to adjust the bass, treble, etc. You can do this at the speaker level, or you can install another program in Windows to adjust the EQ, but it would have been nice to have some simple software included on the driver CD. 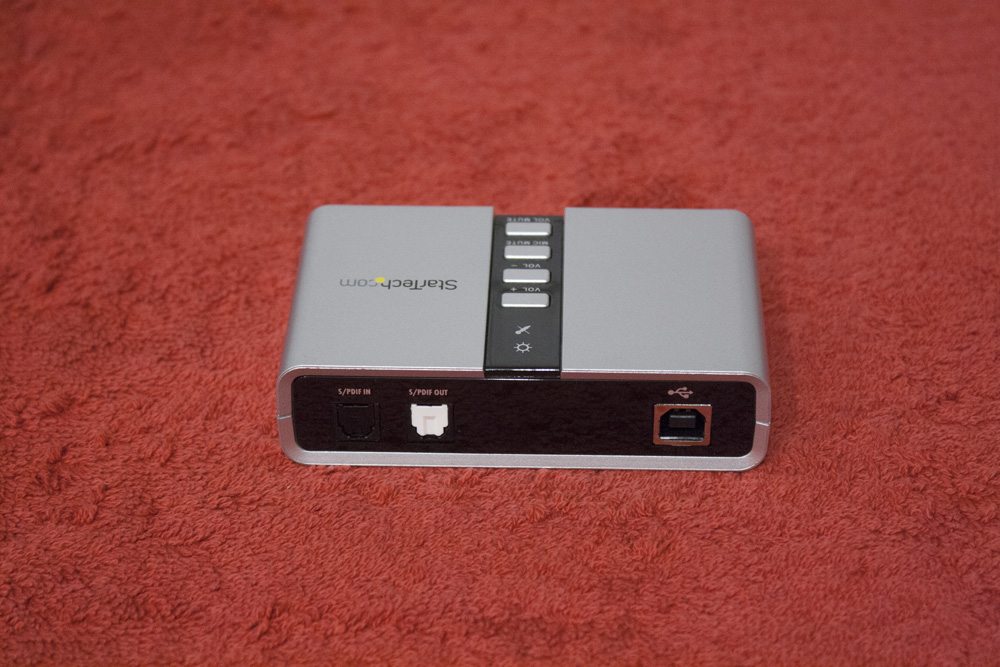 The StarTech.com sound card does have another annoying limitation. The S/PDIF system is merely a passthrough; you can’t generate an S/PDIF output without an S/PDIF input first. That’s annoying for those that wanted to hook up a digital system with analogue inputs. The microphone quality isn’t top notch, either. I’m using a USB mic for most tasks, so this wasn’t a concern to me, but it impacts potential professional usage of this USB sound card.

The StarTech.com 7.1 USB card is a simple but effective solution to sound card woes. If your built-in sound card is broken, lacks inputs or just sucks, then the Startech.com sound card is a great replacement. While the mic quality and lack of true S/PDIF output could preclude this card from some professional uses, it’s a strong option that boasts a good range of ports, rapid setup and an inoffensive look.

Here’s something cool: a laptop bag with a solar panel on the front, so you can get free unlimited...