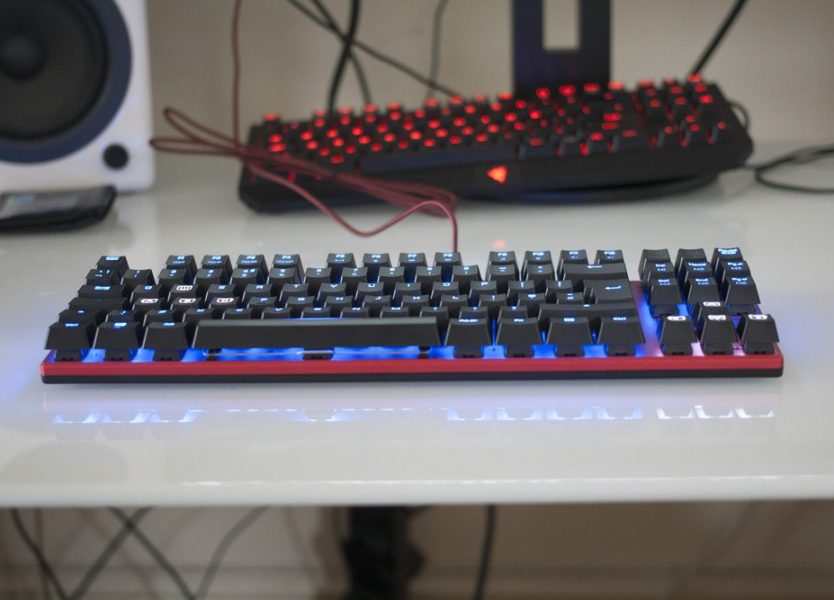 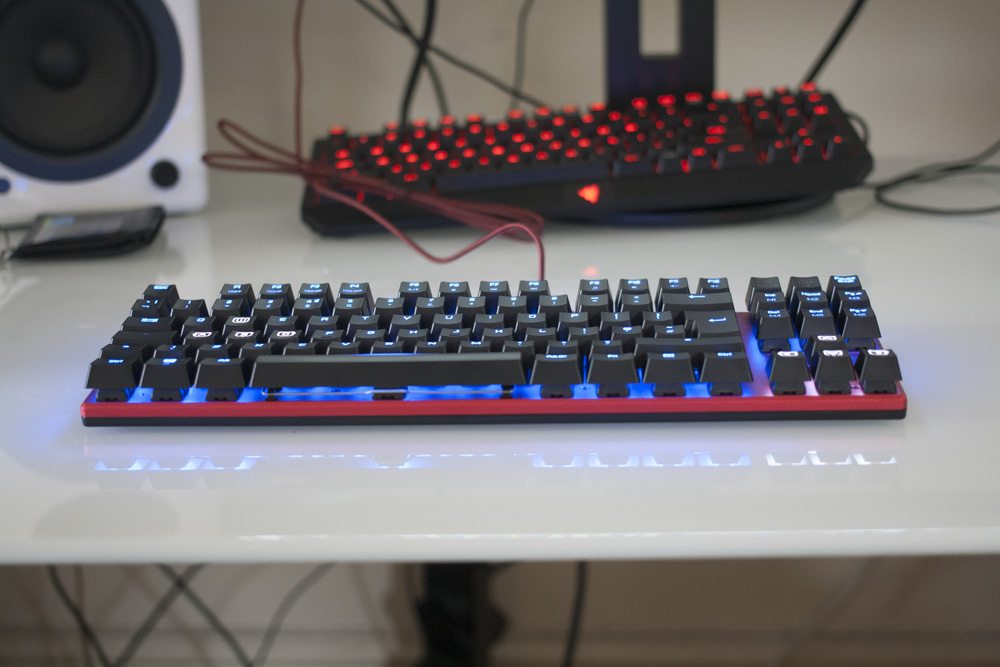 Late last month we first reported on the Speedlink Ultor mechanical keyboard, and now a review unit has arrived at XSReviews HQ. This frameless mech certainly looks good, but can it deliver a great gaming experience? Let’s take a look.

With backlighting, macro support and a game mode, the Ultor ticks a lot of the boxes for a gaming keyboard, and it’s not too expensive either. If you don’t mind Kailh switches over the OG Cherry or its red colour scheme, you’ll find the Ultor a solid keyboard with a minimal footprint. 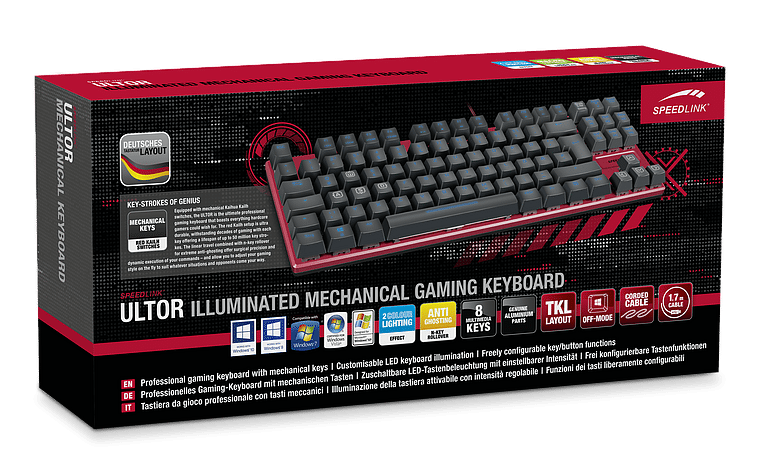 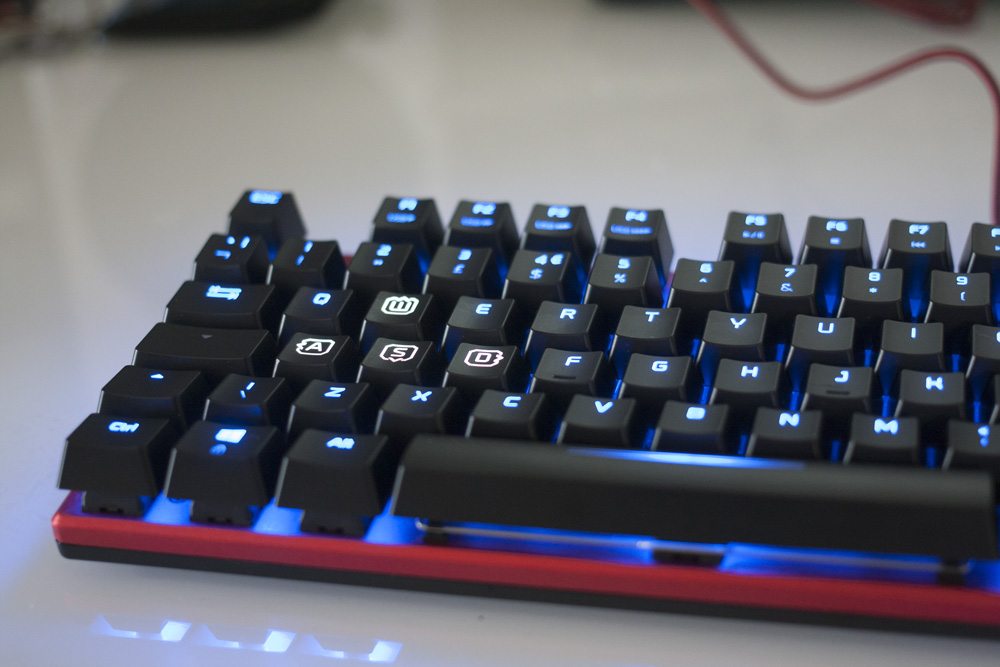 The Ultor has a small footprint, great for small or crowded desks, as the keys aren’t surrounded by a frame. This means the keys are a little less protected if you cram it into a backpack, but it looks cool and saves space. The base of the keyboard is painted in a sporty metallic red, and it feels quite solid in the hand — as you’d expect from its aluminium construction.

The layout is mostly standard TKL, but it does include a Function key to the right of Alt Gr, allowing use of this keyboard’s many extra capabilities. These include USB response rate speeds (F1 to F4), media controls (F5 to F12), macro keys (navigation cluster) and even gaming mode (Print Screen). 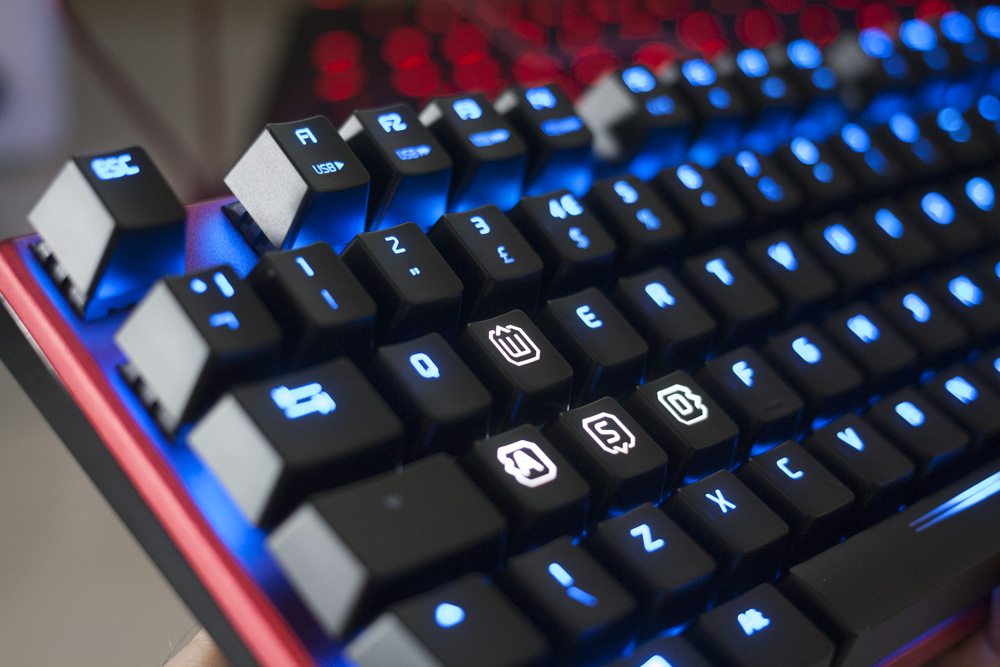 The keyboard has almost entirely blue LEDs; the colour cannot be changed. The WASD and arrow keys have white LED backlighting, making it easy to find them without paying attention, which may be welcome for some users. The brightness is adjusted in software, or by pressing Fn + Scroll Lock. 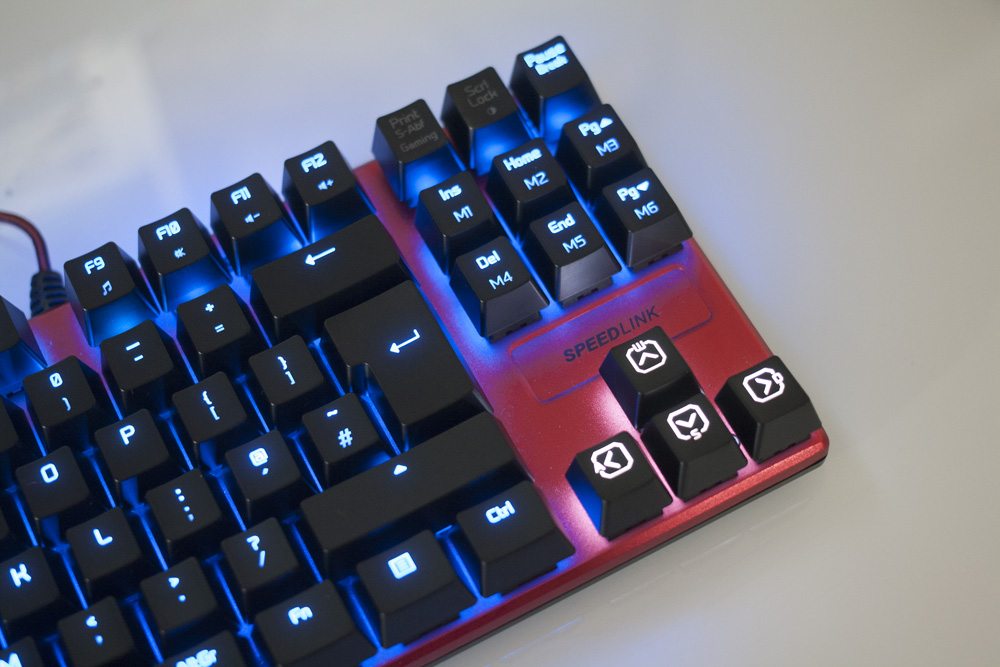 The keycaps are made of ABS, which is expected for a keyboard at this price range. Speedlink have selected a very readable font, with the only obvious ornamentation around the WASD and cursors keys. 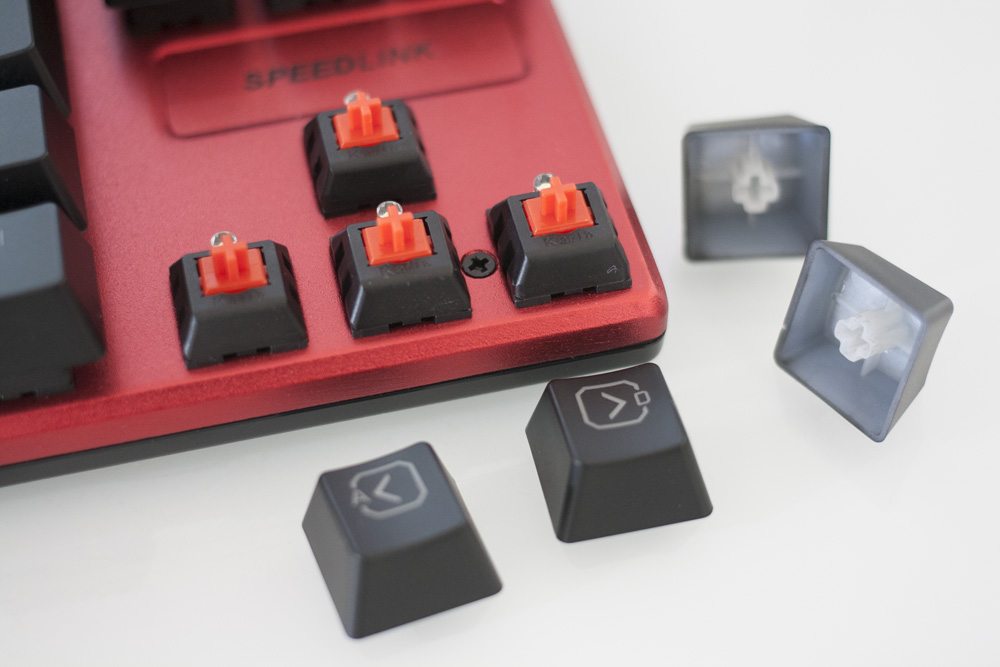 The keyboard is heavy too, weighing nearly a kilogram. It’s not so much that you’ll break your back or anything, but it is a lot heavier than non-mechanical keyboards, and that’s worth keeping in mind if you’re aiming to use this as an upgrade over your laptop’s keyboard. 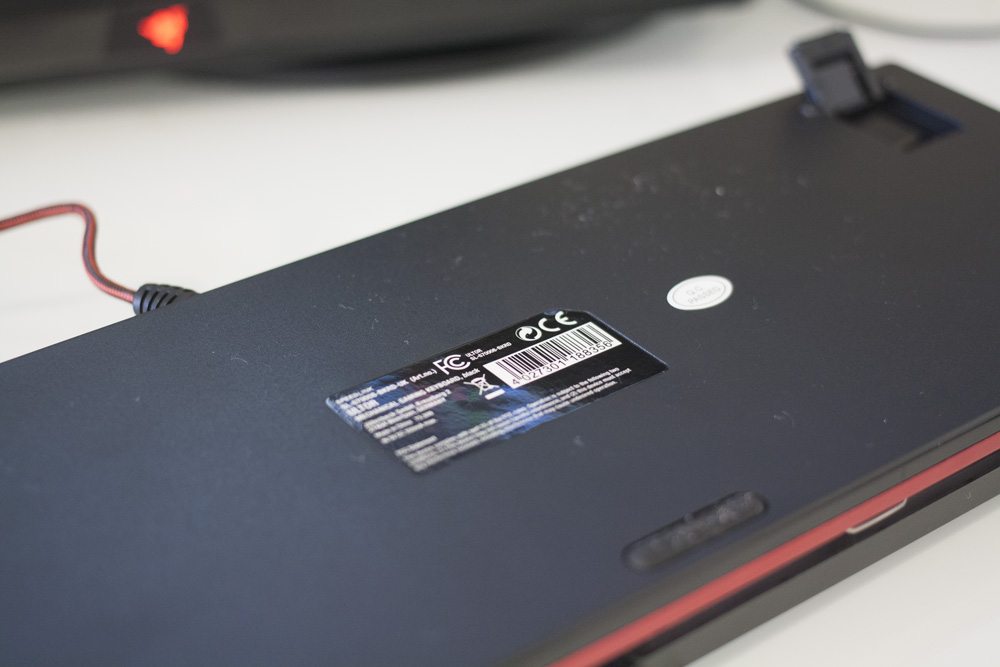 The bottom of the keyboard is quite standard, with a couple of little flip-out legs, a sticker which hides a screw (I’m guessing), and a braided cable of good quality that measures 1.7 metres.

The Ultor comes with software, allowing you to rebind each key on the keyboard, change between five profiles, record macros and edit other functions. 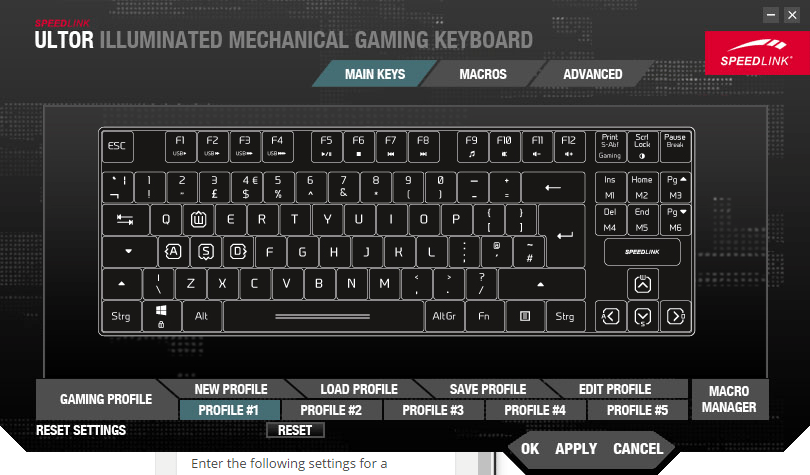 The macros tab lets you set up the six macro keys: 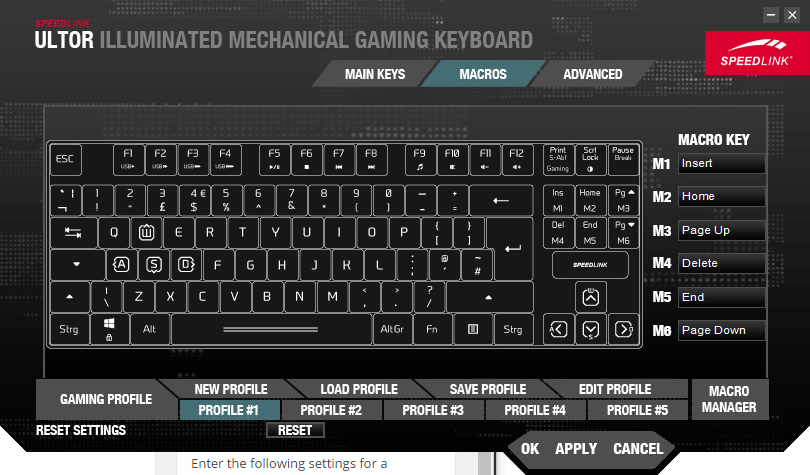 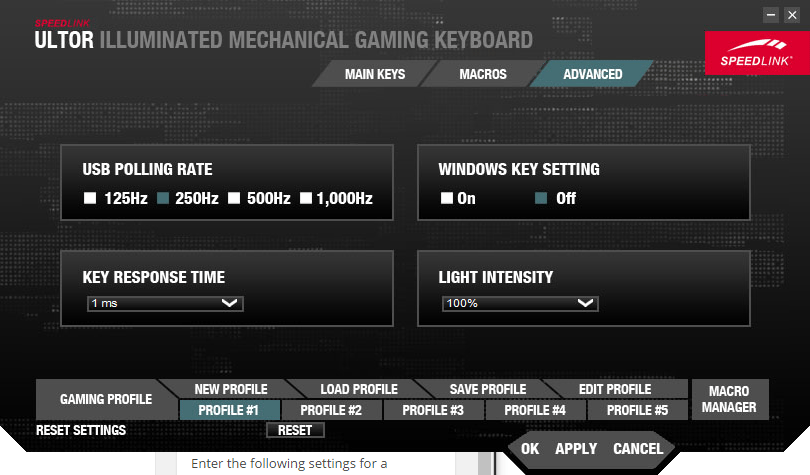 The macro manager isn’t pretty, but easily gets the job done. You can record a series of key presses with or without delays, and have the macro loop a set number of times if you wish. 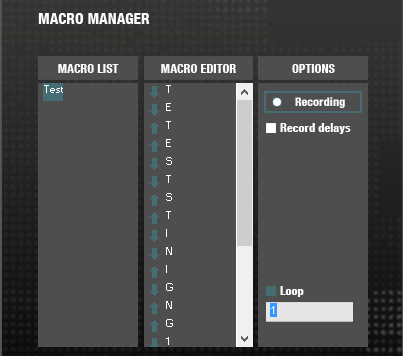 The software package is quite straightforward, and I appreciate that; even if it isn’t as nicely laid out as some other options from larger keyboard brands.

This is a gaming keyboard first and foremost, so I hopped into a few games of Overwatch, Counter-Strike and Civilization V to test it out. The light Red switches make double-tapping quite easy, which is helpful for dodging in Unreal Tournament or recovering from an AWP shot in Counter-Strike. 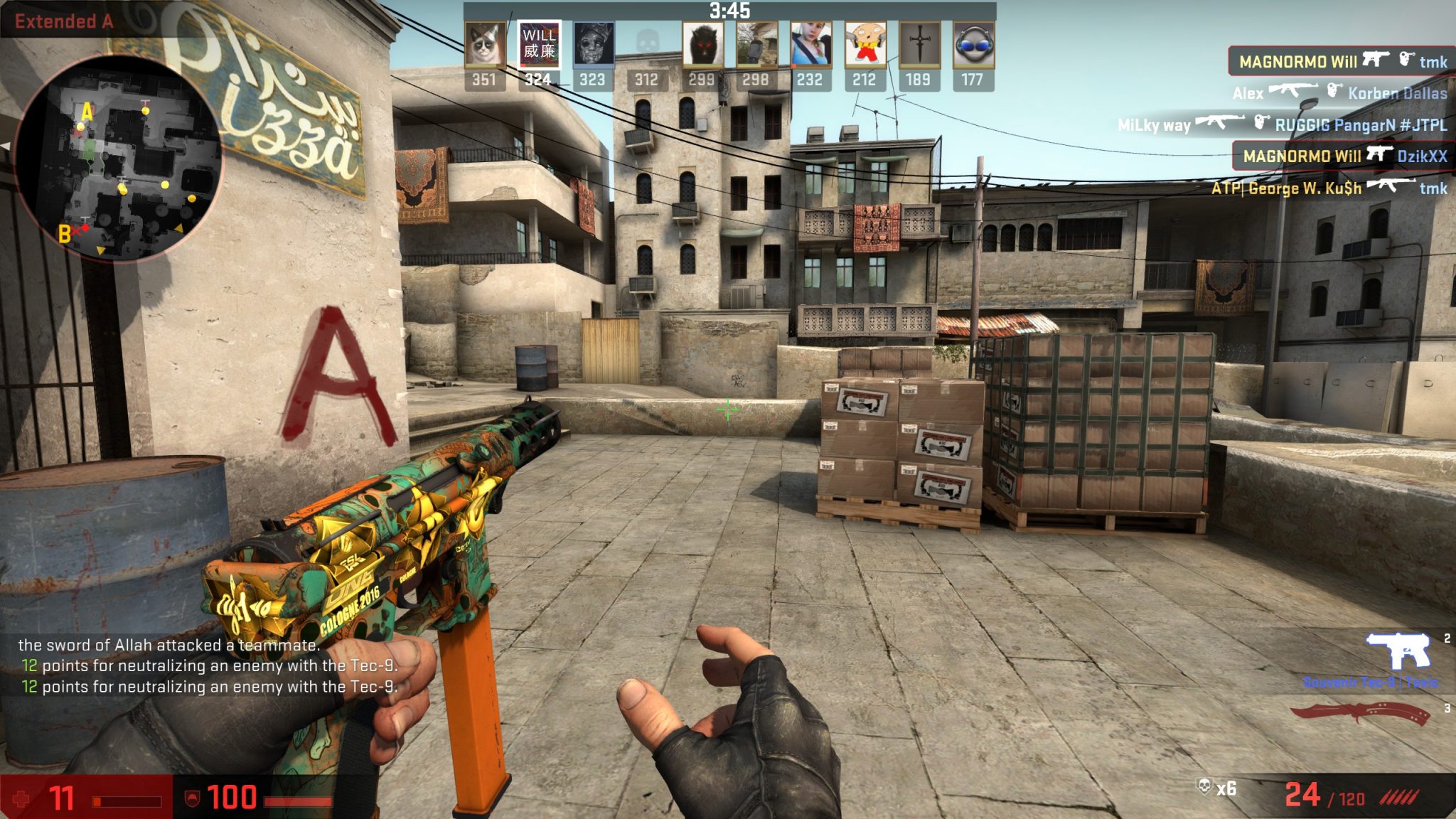 The standard layout and backlighting were helpful in keeping my hand in the right position even during frantic gaming, and I faced no issues switching from my usual Razer Blackwidow Stealth Tournament Edition Chroma (yes, that is a long-ass name).

As always, switch choice is a matter of personal preference. The Red switches used here aren’t my absolute favourite for typing, but their light weight makes them comfortable enough. They’re a bit quieter than Blue and Brown switches too, although they’re still much louder than the average membrane keyboard. 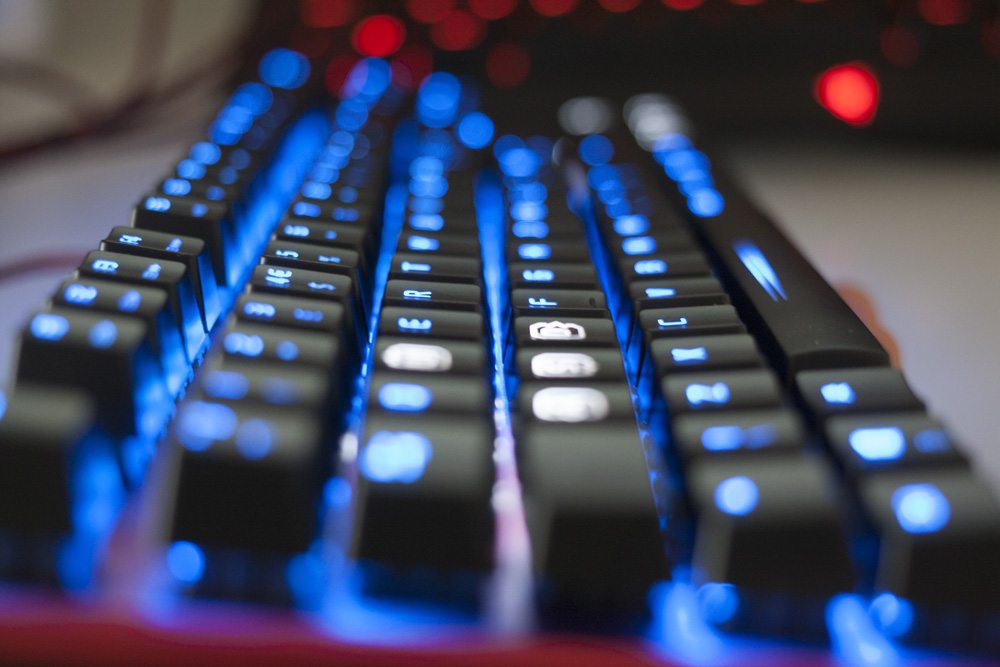 One potential issue I found was the consistency of the switches. Some switches felt as I expected, while others felt a little harder to press down. One criticism levelled against Kailh in the past is that there is a larger variance in the force required for the switches to actuate, and that might be what I’m experiencing here. In particular, the f key felt stiffer, and I found I missed out that letter sometimes when typing. It’s not the biggest deal in the world, as I tend to make typos regularly anyway, but it is something to check if you pick up this keyboard. I’ll continue to use the Ultor and report back.

The combination of the Red switches and the standard layout makes the keyboard quite easy to get used to; there are no weird changes here to trip you up. I used the Ultor to write up its review, as well as write about a week’s worth of articles (about 2000 words per day, so maybe 10,000 words in total), and I didn’t encounter any other issues — the switches felt good, the backlighting was useful, and that’s that.

I wasn’t quite sure what to expect with the Ultor, but I’m happy to say it’s a perfectly serviceable keyboard. Besides the slightly stiffer f key, I didn’t find any issues, hardware or software. The keyboard is compact and nicely backlit, it’s mechanical, and it’s backed by powerful software capable of rebinding all keys and setting up macros. If you can see past the bigger brands like Razer and Corsair, Speedlink’s Ultor is definitely worth considering. 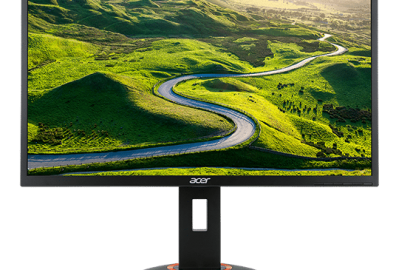 Right now, there’s one choice for gamers with high-end PCs to make: do you want a 4K monitor at 60Hz or... 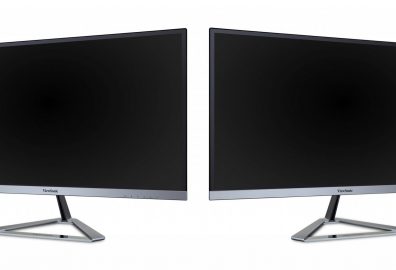 The ViewSonic VX2776 is such a good-looking monitor you’d be surprised to learn it only costs £200....