The Parthica is a classic gamer keyboard, with loud LEDs in red or blue and design flourishes across the board. The rubber dome keys don’t offer much tactile response, but the full layout and extra keys could appeal to some users. If you want a flashy rubber dome keyboard instead of a barebones mechanical, this is a reasonable choice.

The Parthica is a big and wide keyboard, with a full layout plus a number of additions.

There are macro keys on the left side, shortcut keys along the top left, and media keys in the upper right corner. The keys are fairly closely spaced, but the sheer number of keys combined with the extra design flourishes ensure this keyboard will monopolise your available desk space.

The keys are listed as ‘mechanical-style’, but they’re quite obviously normal keycaps with little resemblance to a mechanical system. The keycaps aren’t MX-compatible, as we’ve seen on some rubber domes before, so it’s a confusing label. 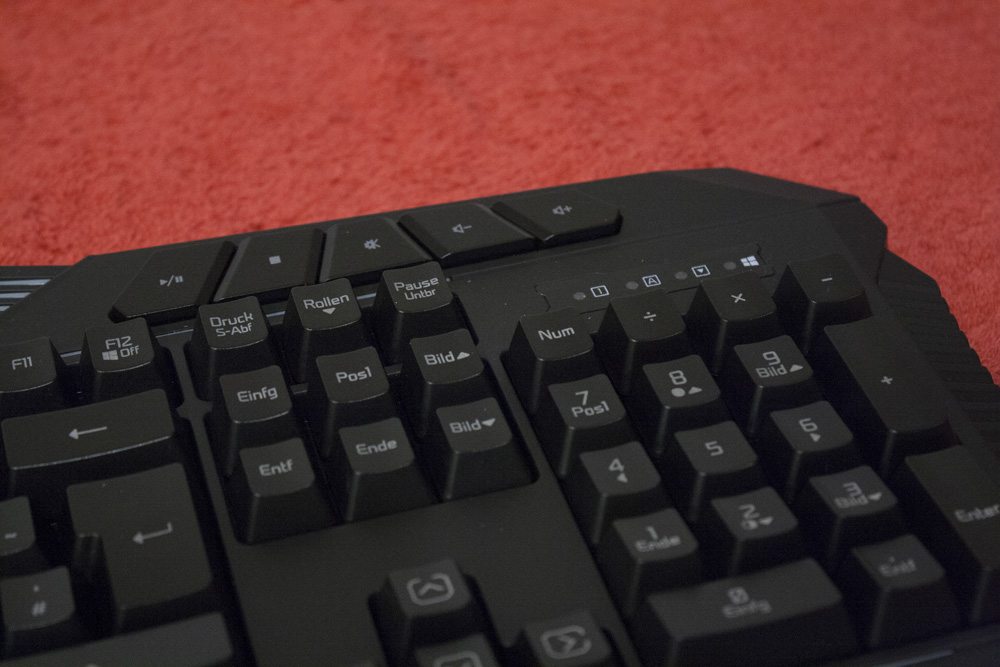 The macro keys sit quite close to the main board, which makes it easy to hit them accidentally when you’re aiming for Escape, Tab or Caps Lock. 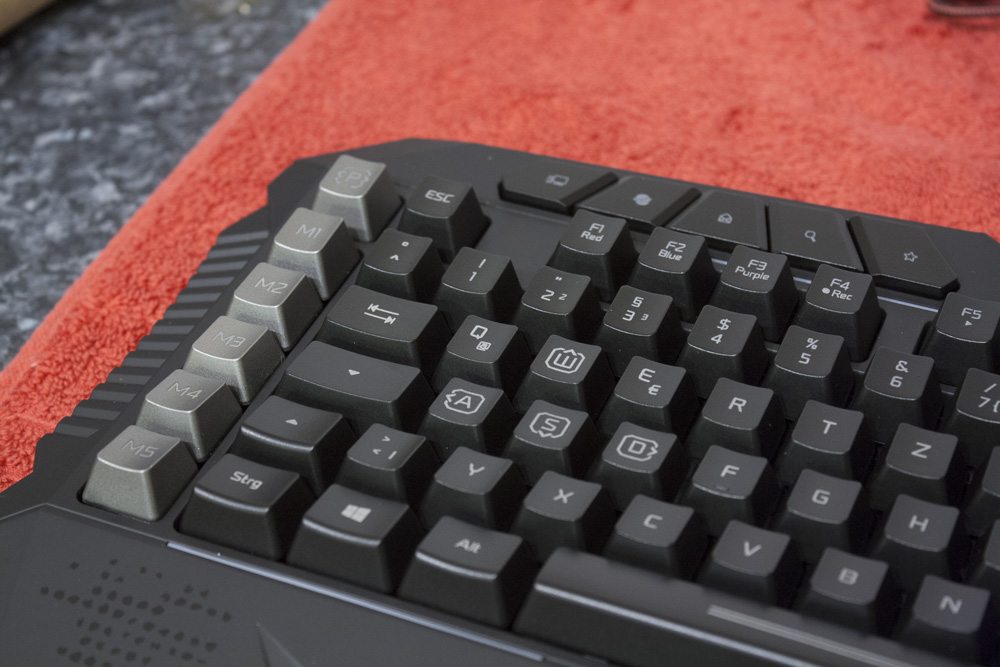 The USB cable is thin but braided, with a gold connector and a black/red colour scheme. 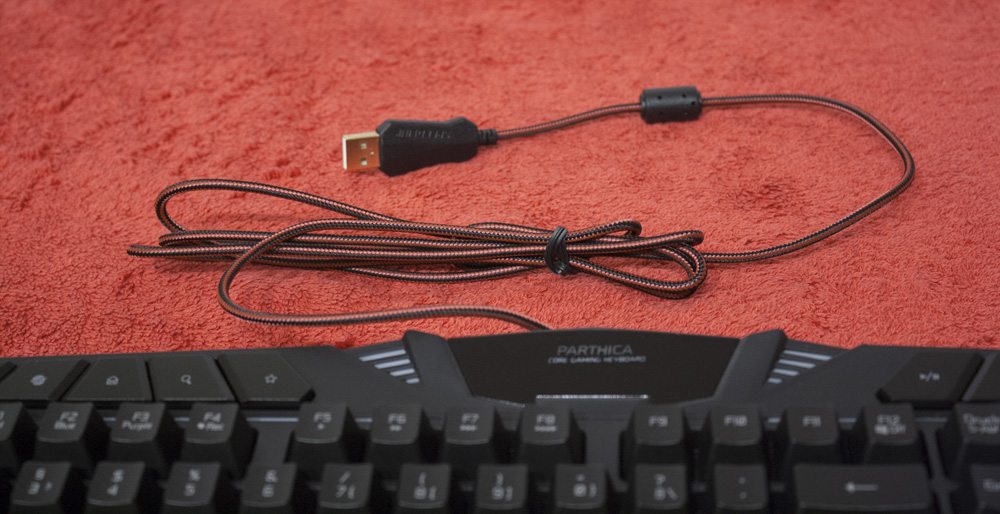 The bottom of the keyboard is fairly standard, with little flip-up legs. 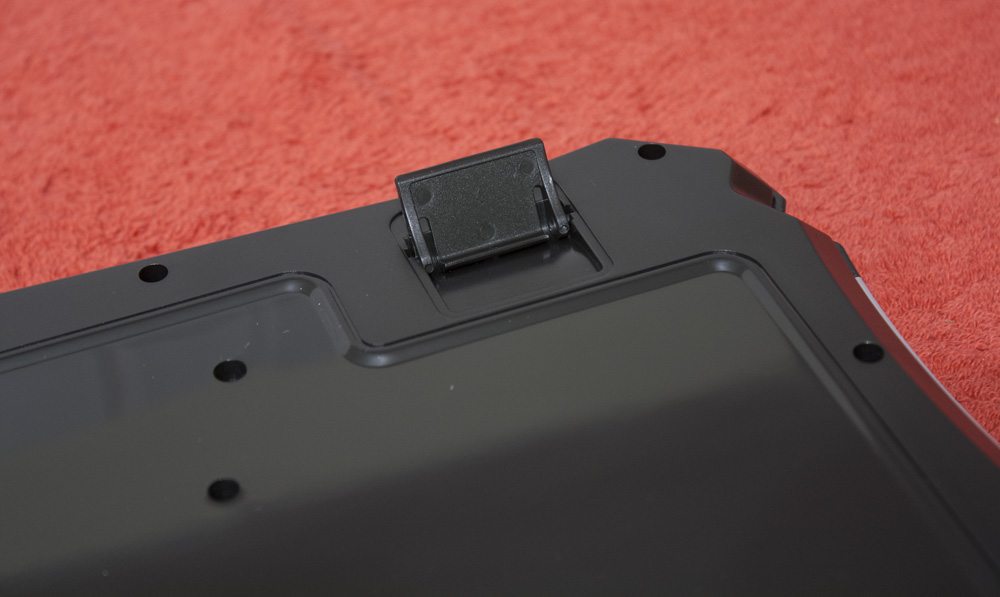 Overall, it’s a fairly classic ‘gaming keyboard’ design, with the emphasis on size and flashy flourishes over a compact footprint.

Speedlink’s Parthica software is all presented on a single page, which is nice. You can press a key to remap it, and there’s a handy list of common functions within easy reach. 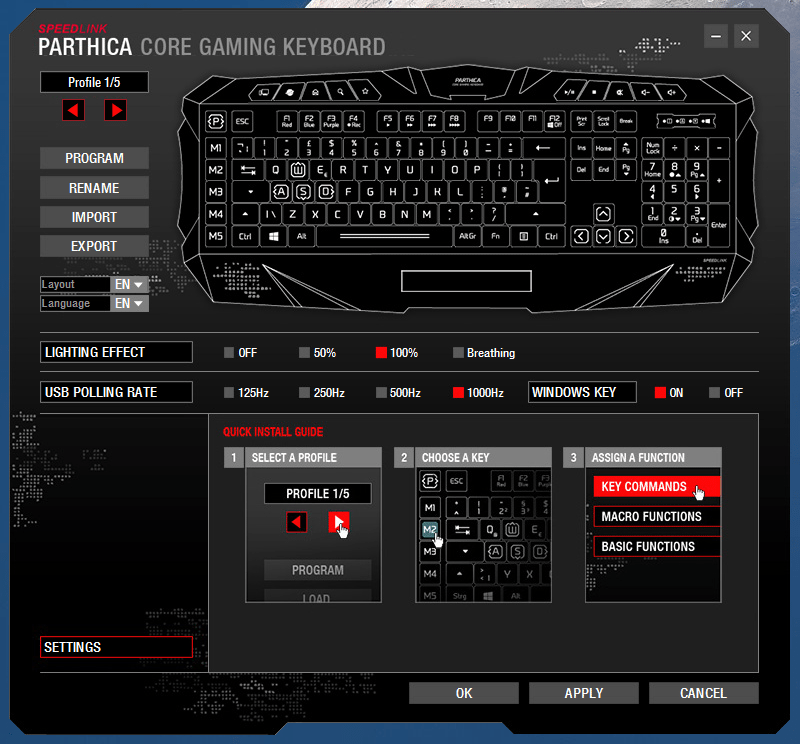 All of these settings are set on a per-profile basis, with five profiles available. You can switch profiles by pressing the P key to the left of Esc.

We used the Parthica for both gaming and writing (including this entire review). We found that the Parthica couldn’t really compete with even a low-cost mechanical keyboard when it comes to key feel. Simply put, you’re lacking a lot of tactile and aural feedback, which makes it harder to use a keyboard with speed and accuracy. Still, the Parthica feels like one of the better rubber domes on the market.

One annoyance is the strength of the LEDs (which are far dimmer than they appear in the press photos). While the LEDs on the body are quite bright, those under the keys seem incredibly dim, even at 100% brightness. This makes it hard to see which key you’re pressing, particularly in dim environments.

The extra keys came in handy, thanks to the robust macro editor. You can set the macro keys on the left to launch programs, open web pages and automate other common tasks, which can definitely be handy when you really want to get into Counter-Strike that extra bit faster.

Perhaps the biggest flaw with the Parthica is its sheer scale. Compared even to other full-size keyboards with number pads, you have to dedicate an incredible amount of desk space to the keyboard. That pushes your mouse far to the side, which forces you to adopt a fairly uncomfortable stance for gaming.

Before mechanical keyboards became popular, manufacturers competed to produce the biggest keyboards, with the flashiest lighting, most extra keys and gamer-focused features. The Parthica is a throwback to that simpler time, and while it can’t compete on key feel with the mechanicals, it’s an excellent example of the style.

Creative’s Muvo Mini is a good-looking Bluetooth speaker, with a rugged water resistant design and a...

Around the turn of the millennium, my dream was to own one of the cool gaming desktops I’d seen in PC...