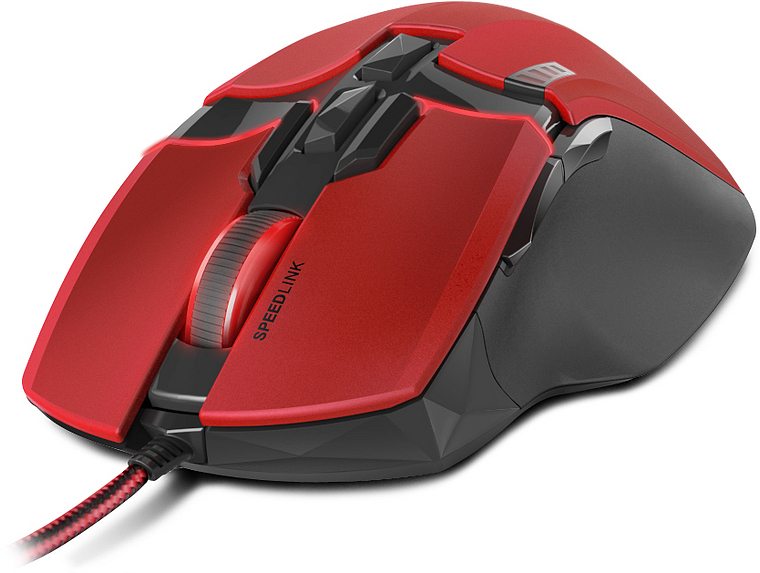 Today we’re looking that the Speedlink Kudos Z-9, a budget gaming mouse available on . Despite its low price, the Z-9 actually looks pretty cool, with a stylish red finish and some unique features… including a smartphone app to update your settings on the fly. Let’s take it for a spin!

The Z-9 comes in a standard (if flimsy) cardboard box, with the same bright red colour scheme as the mouse itself. 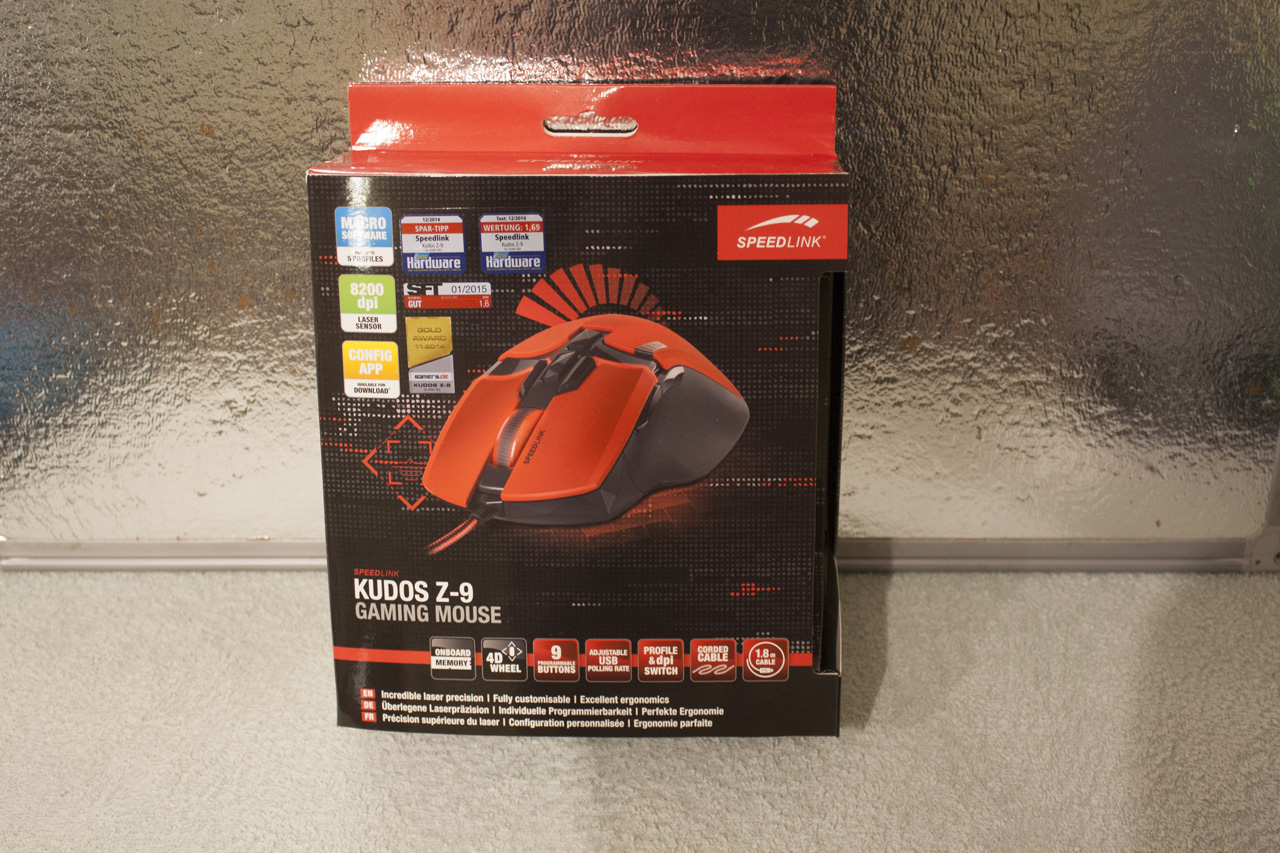 I have to take several million points off for the claim that the mouse “responds to your commands with no delay” and has “a stunning zero response time” to ensure “instant implementation.” Unless Speedlink’s engineers have broken the laws of the universe and gained the powers of gods, this is a completely bogus claim. The art of marketing is to portray your product in a flattering light without actually lying, and whoever designed this feature list and box art has badly misstepped here. 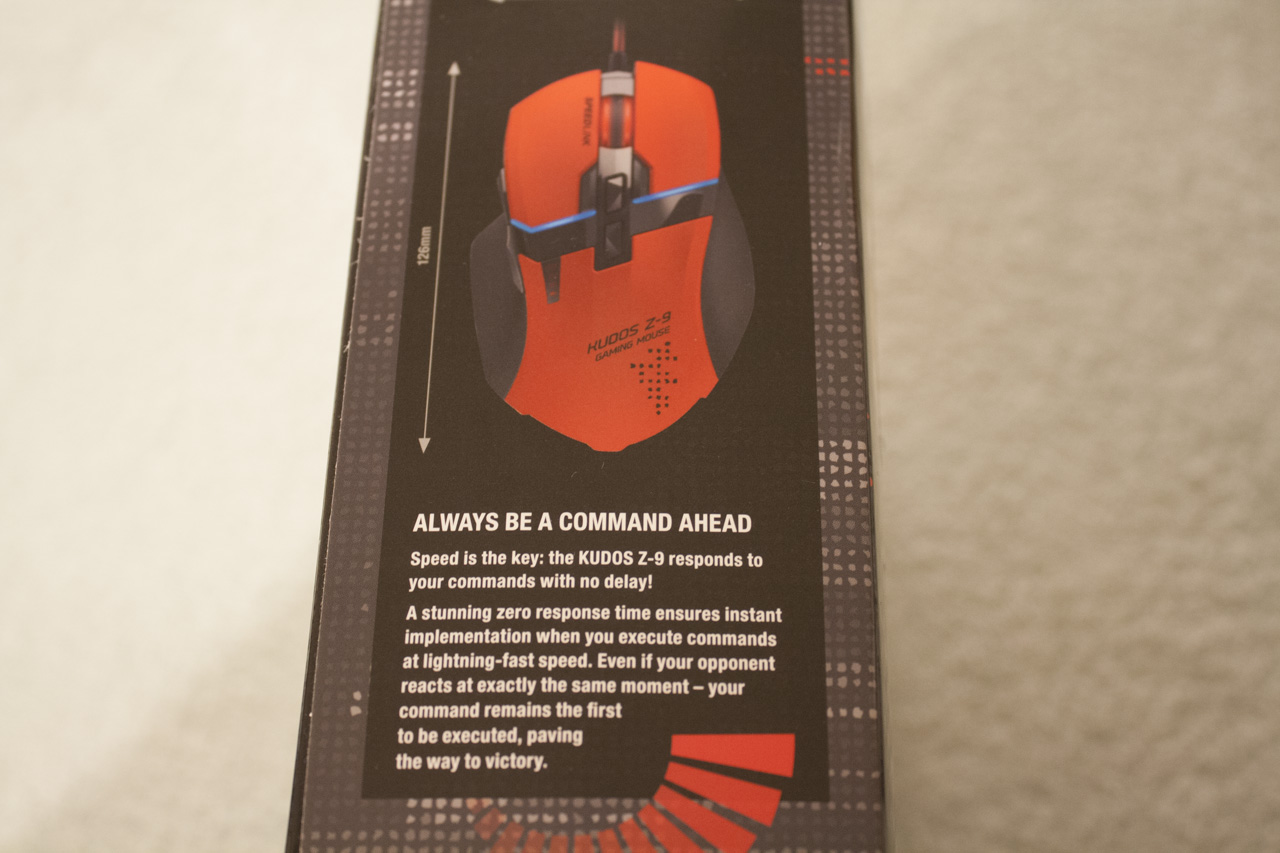 Moving on swiftly, we come to the contents of the box. Here we have a reasonable arrangement, including a real actual physical CD for people that still use those things, a quick install guide, oh so tasty “Do not eat” silica gel and the mouse itself. 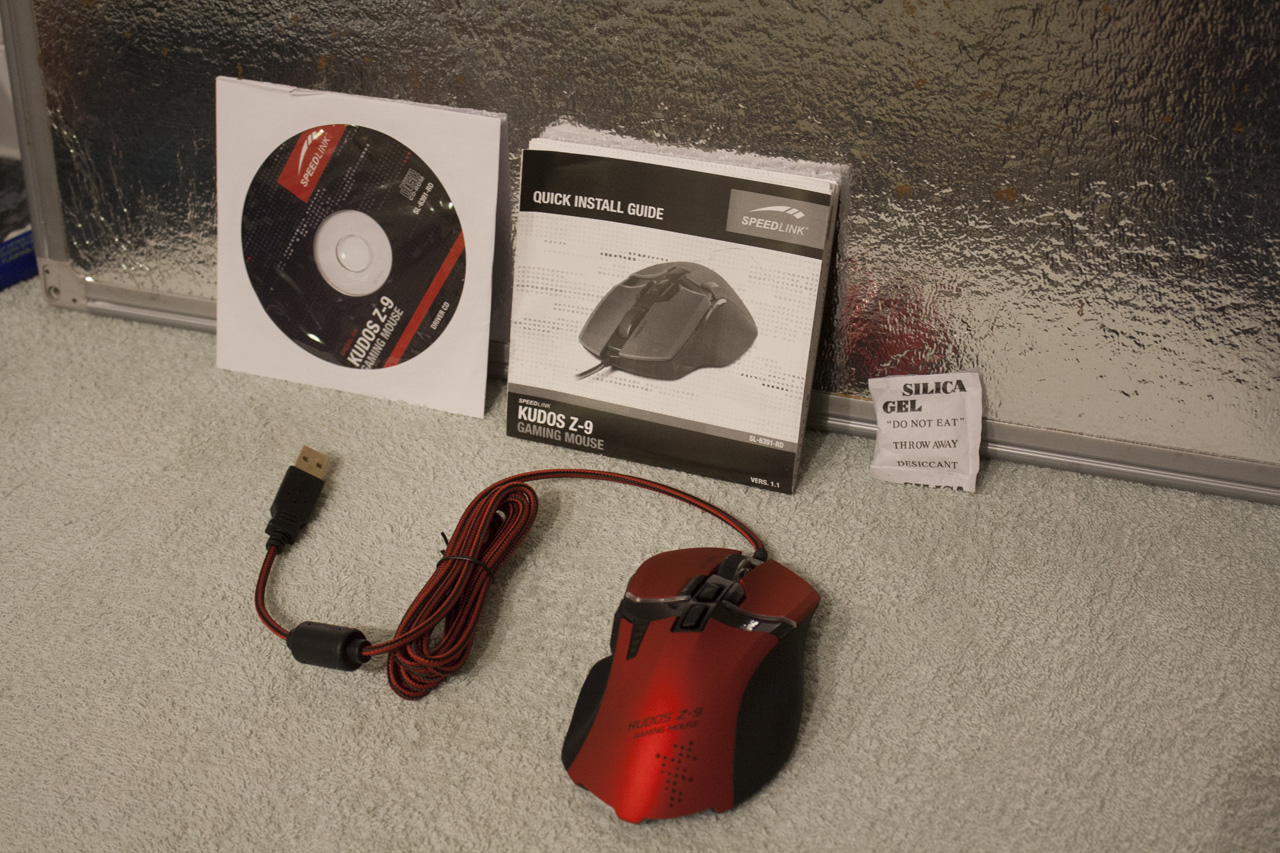 Now let’s get a better look at that mouse!

The mouse is quite fetching in the flesh (so to speak), with a metallic ruby colour that catches the light nicely. 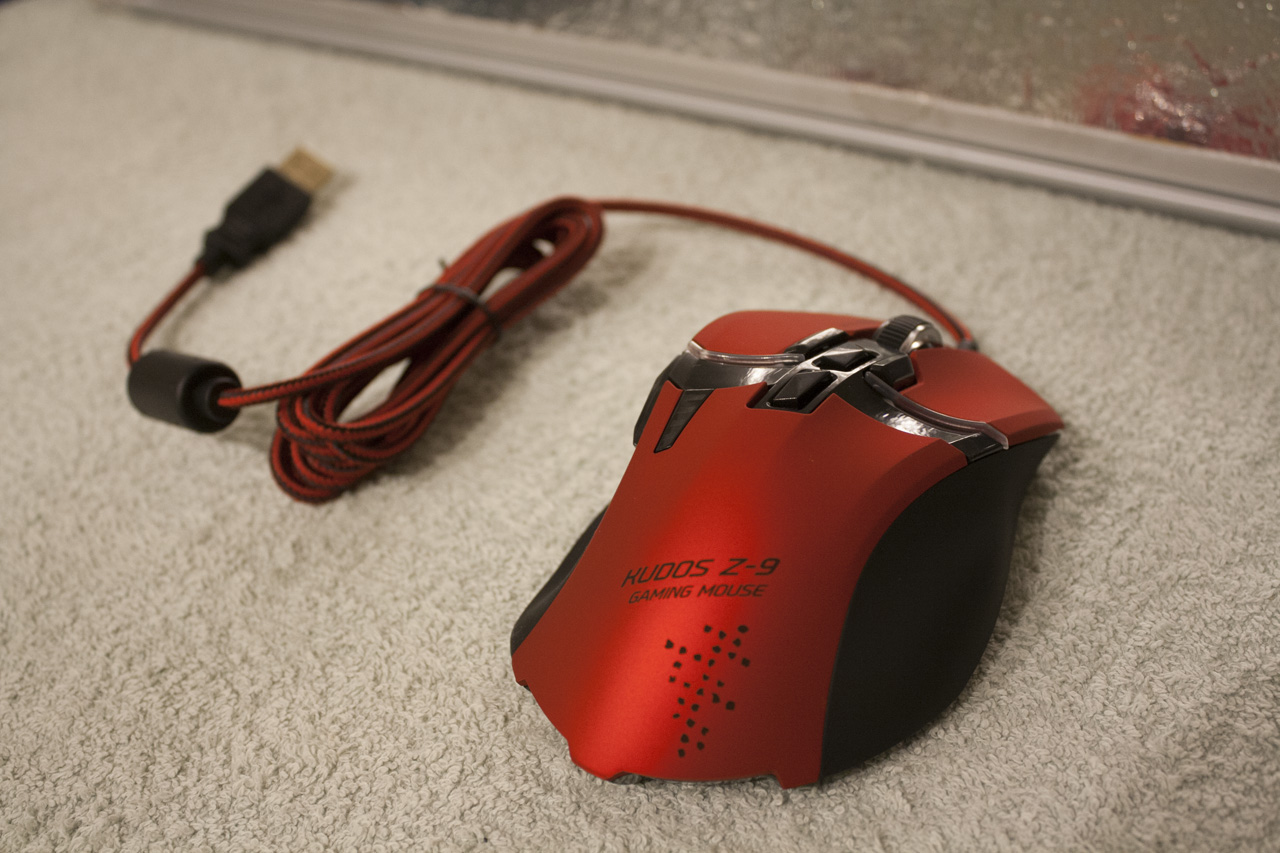 The mouse falls into the same “slim but complicated” camp of design as the Logitech G502. That means a sculpted shape that fits your right hand (but not your left), with a few swooping bits to keep things interesting.

The left side of the mouse has two buttons just below the two-tone division, which are easy enough to reach and mapped to back/forward in Windows. You can also see the DPI indicator here, which lights to show which of the four settings it’s currently using. 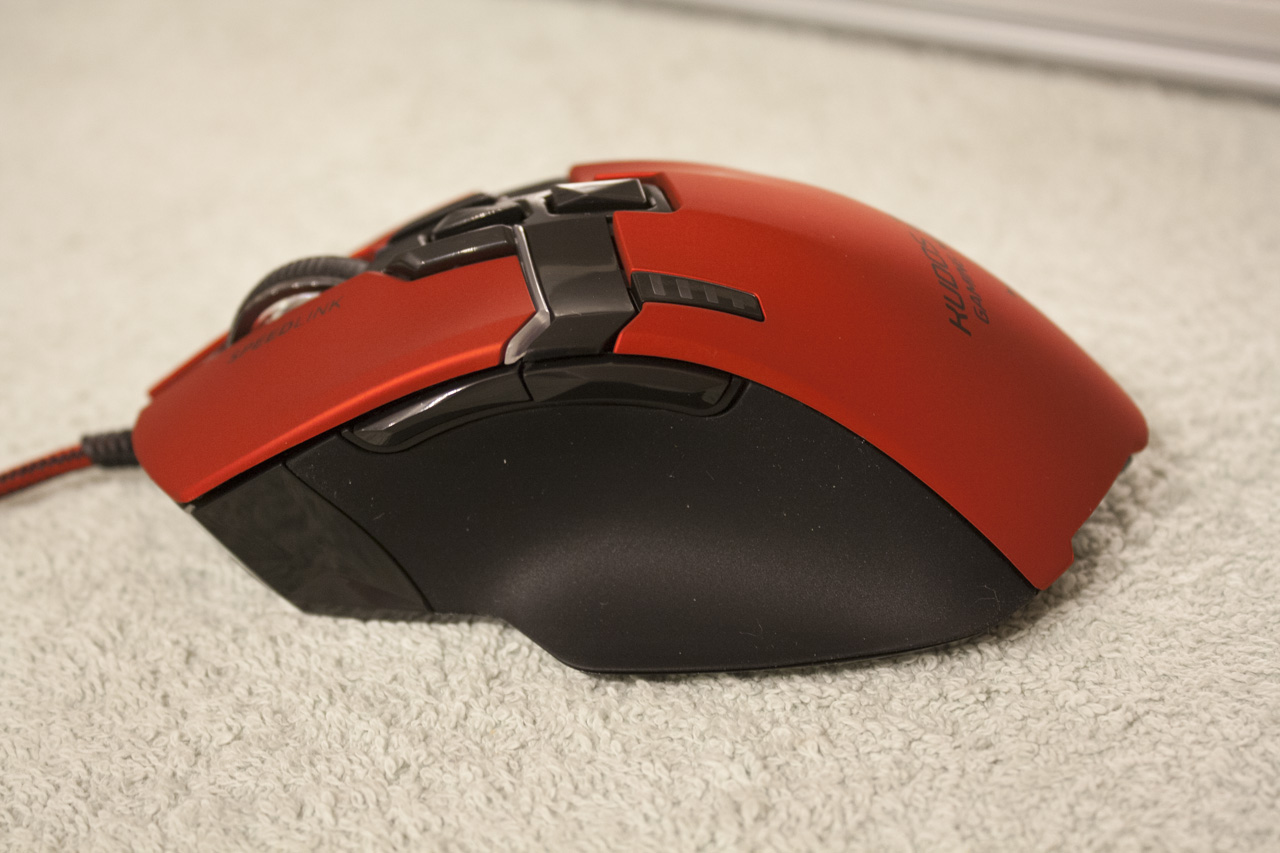 The right hand of the mouse is much more slick, offering little extra grip but a good place to rest the remainder of your hand. 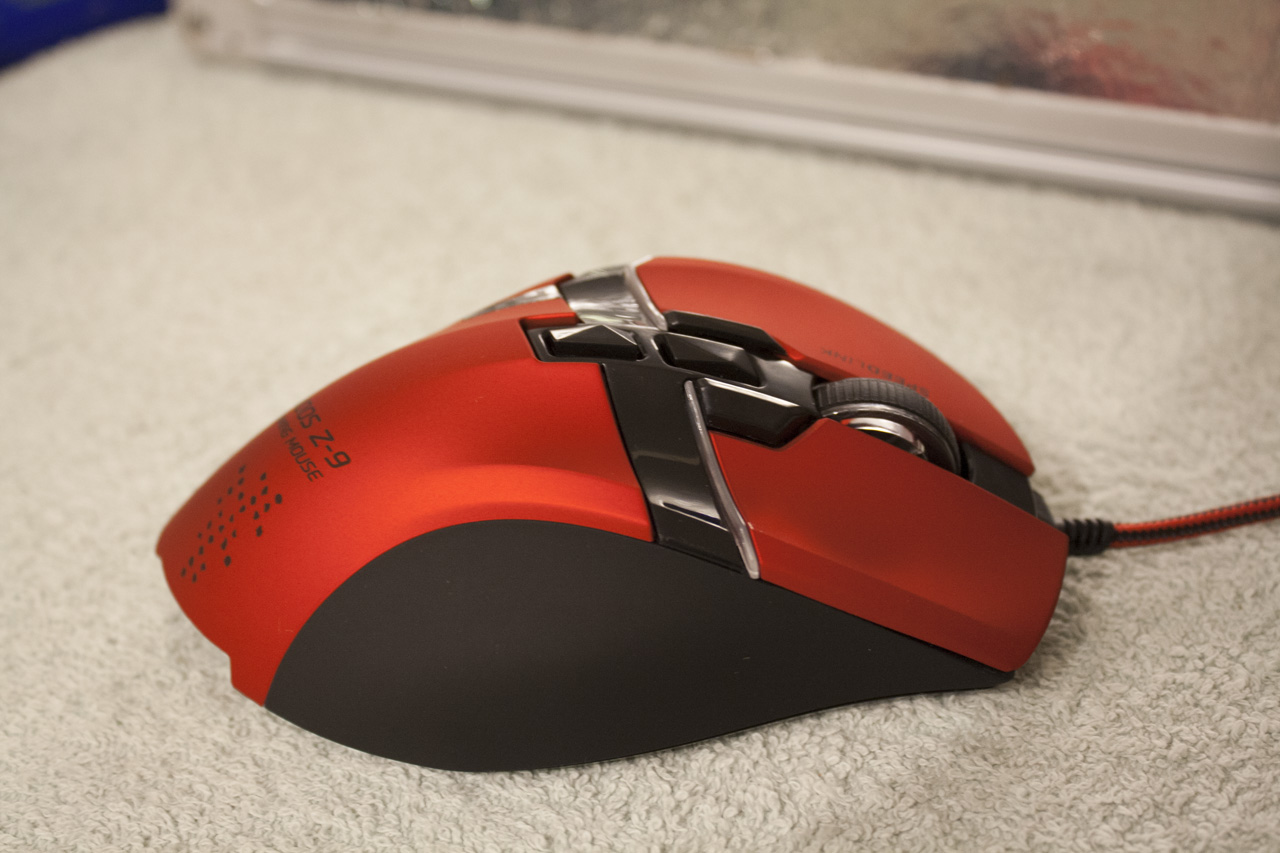 The front of the mouse contains a fairly loose scroll wheel, which is described as “4D”. That means four directions; it can scroll back and forward as usual, and can also be tilted left or right to serve as an additional button.

Just above the mouse, we have two small additional buttons that adjust the volume by default, but can be set to any other button or macro you could want.

You can see the band that runs at a bit of an angle across the mouse, which contains a coloured LED behind. This can be set to run at one of 64 colours; by default it changes as you switch to different profiles. 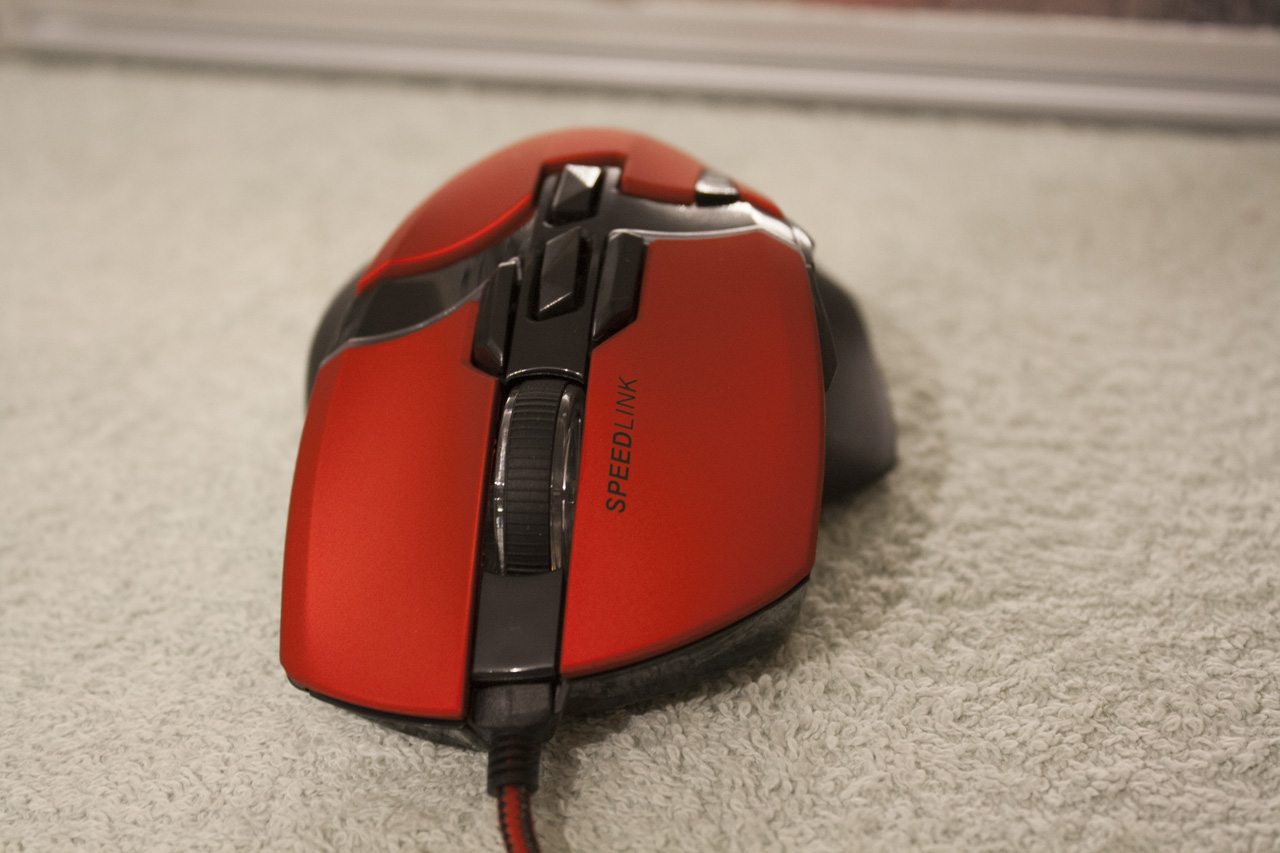 The bottom of the mouse has four skates as usual, surrounding the laser sensor. 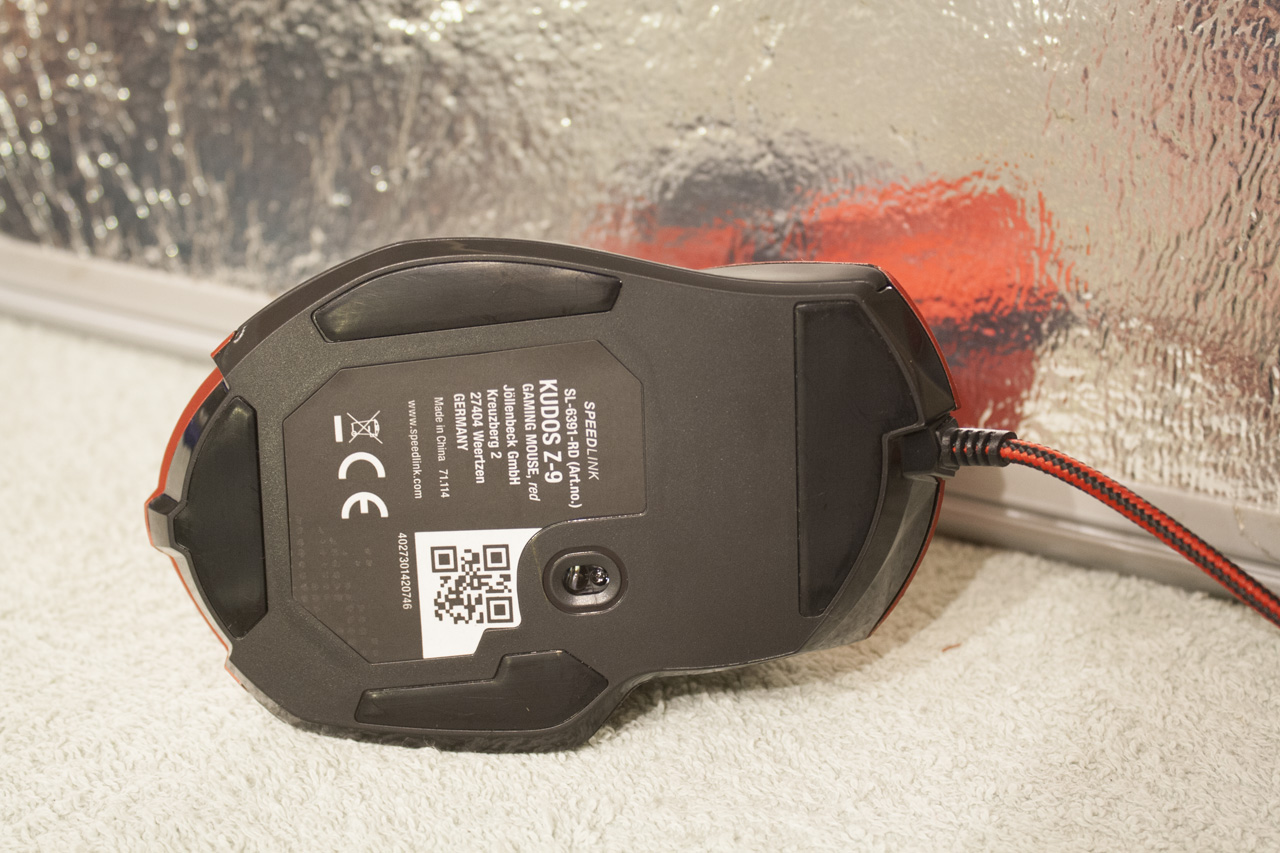 The last part of the mouse is its cable, which is nicely braided in a fetching black-and-red colour scheme. It feels solid too, and hopefully should last for a long time. 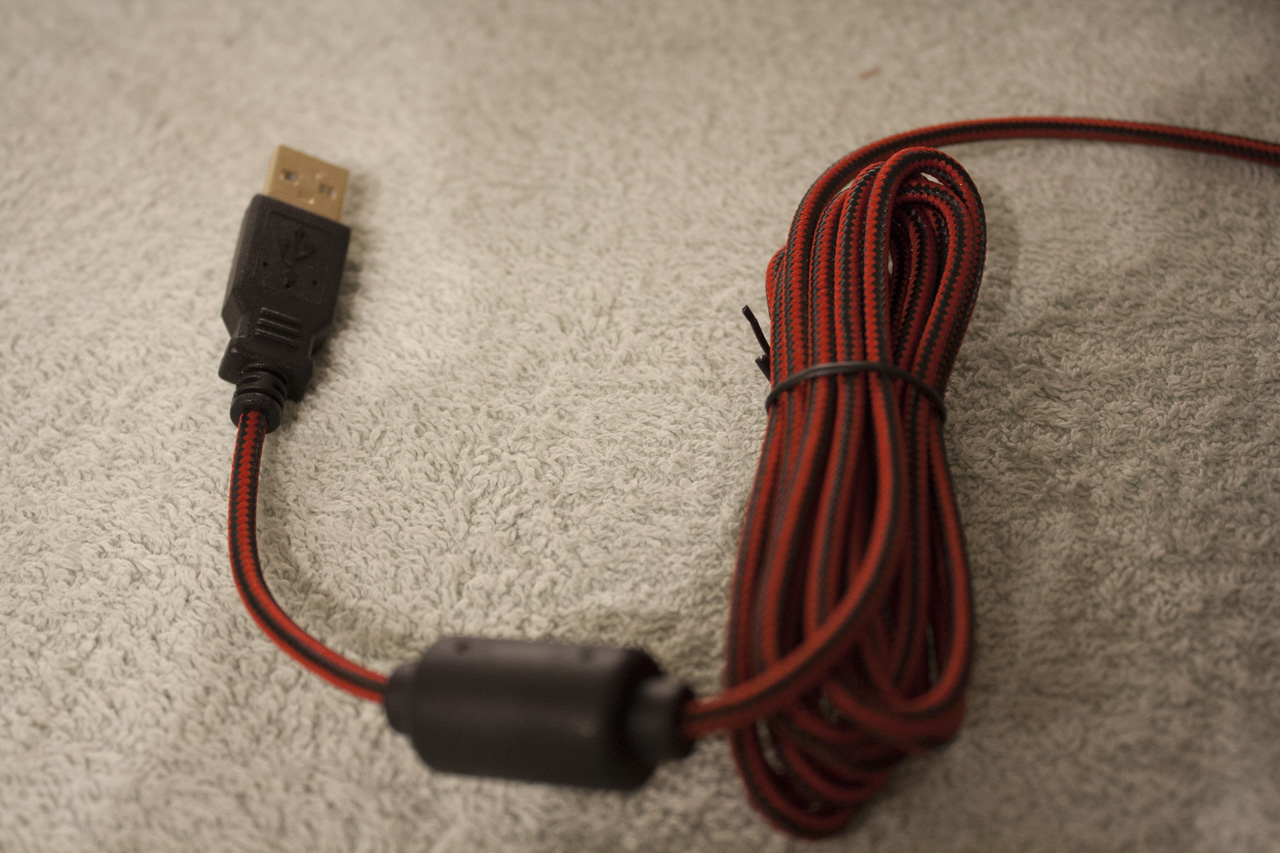 All in all, it’s a good looking mouse that offers a nice contrast to the legions of boring black mice on the market.

The Kudos Z-9 is perhaps the first mouse I’ve seen with two sets of software. We have the self-titled desktop software and also a Configurator app, available on iOS and Android.

The desktop software is surprisingly good for a company that isn’t well known for gaming rodents. You can easily adjust each button to different functions, with the exception of the buttons behind the scroll wheel which are permanently set to profile and DPI switches. 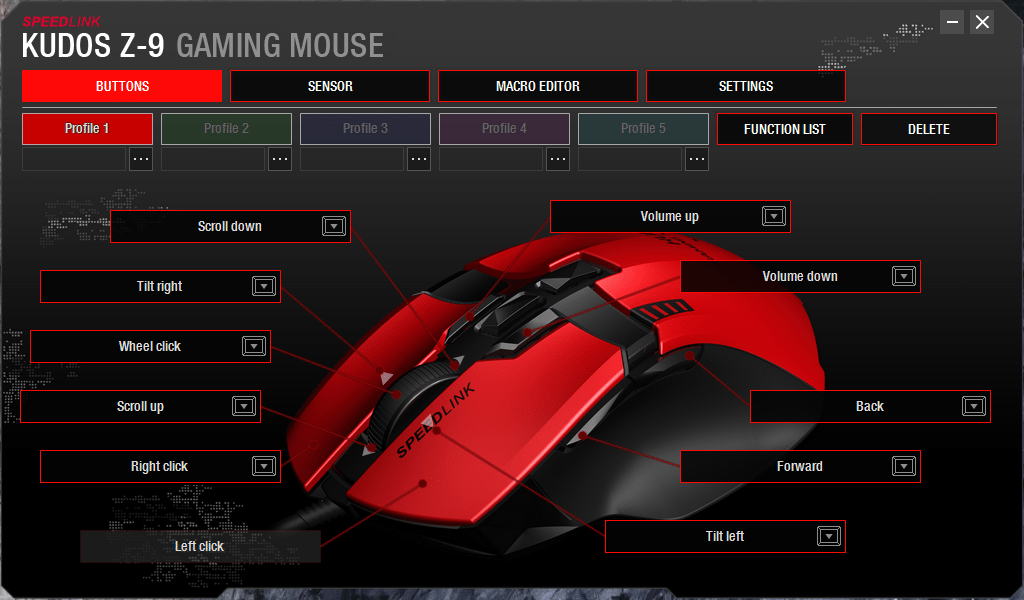 The second screen allows you to set four DPI settings; I’ve moved to the lowest default of 800 DPI for my testing. There’s an option here to set X and Y DPI settings independently, which is a common enough feature that I’ve never known anyone to use. 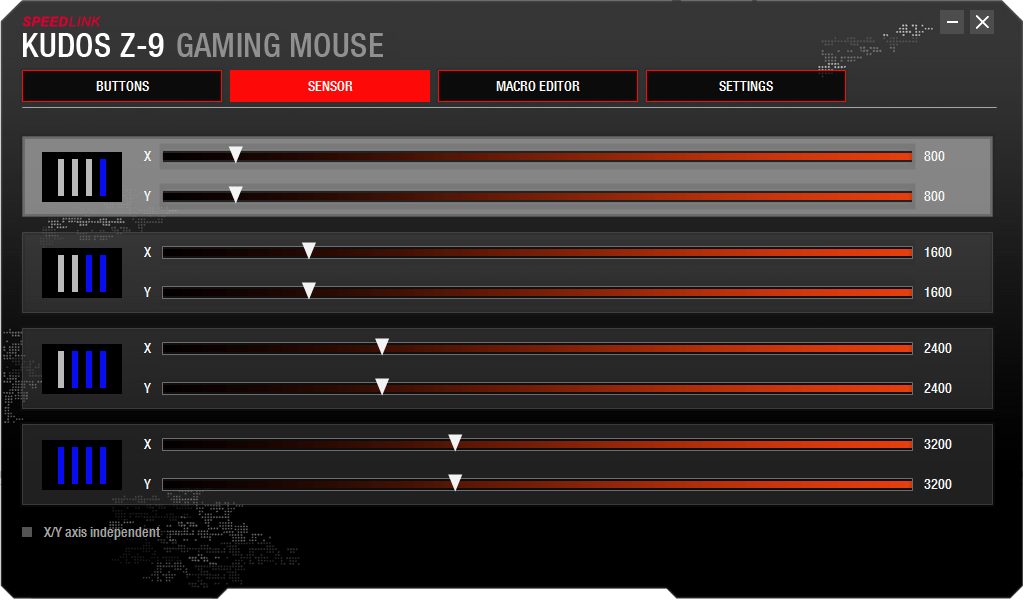 The macro editor is surprisingly capable and intuitive; I had great fun setting up a macro that went to Twitter in my browser and tweeted for me: 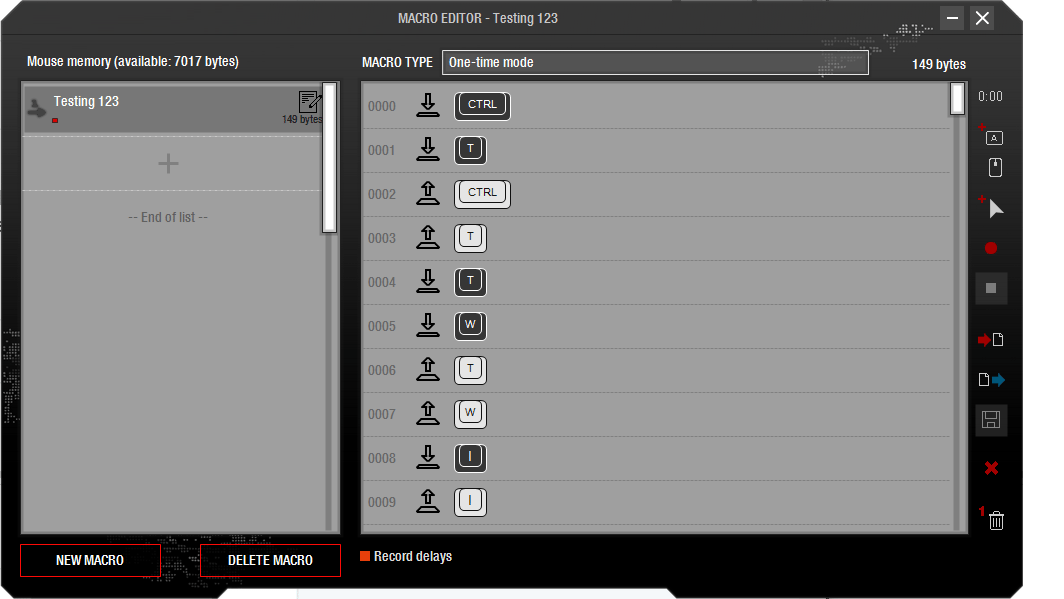 The remaining page sets the polling rate, and allows you to set other options like angle snapping, an OSD for changing DPI settings and disabling mouse acceleration system-wide. There’s also a way to backup and restore your settings here, which is nice. 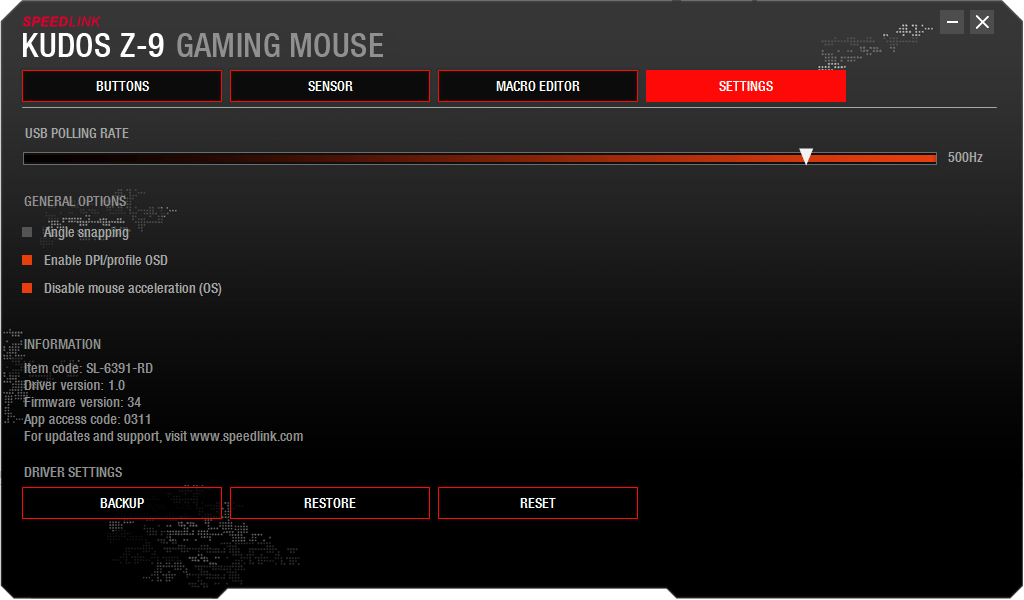 The app is a little less helpful, as I don’t often need to adjust my settings on the fly and I’d rather do it with my mouse (ha) as it’s faster than my finger. Still, it’s nice to have the option, anyway… if only for trolling people who’re using your PC. 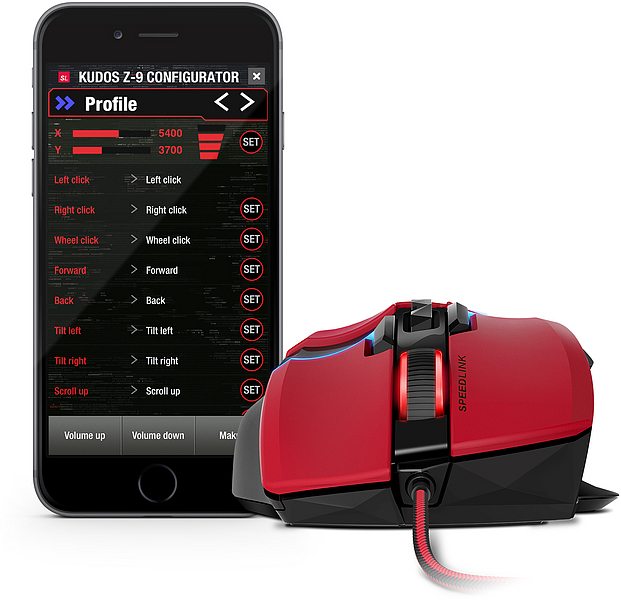 In order to give the mouse a fair shake, we tested it in three common scenarios, in increasing order of difficulty: working in Windows (writing, Photoshop, Facebook), playing Fallout 4, and playing Counter-Strike: Global Offensive. Working in Windows is fairly straightforward; you don’t need a great mouse for this because it’s not a competitive experience, things will just take a little longer if your mouse is less precise or uncomfortable. Fallout 4 is a little more challenging, as there are things that shoot back at you if you don’t click on them effectively enough, but it’s still a single player experience and there’s always the slow-mo VATS modes if you’re having a tough time of things. Finally, Counter-Strike is my go-to competitive challenge, with relatively tough opponents in most matches that depend all of your peripherals – monitor, keyboard, headset, mouse – are up to par. Let’s get started!

When it comes to work, I didn’t expect the Z-9 to let me down and sure enough it acquitted itself well enough. The mouse’s shape is ergonomic enough for long-term comfort, and its light weight ensures you can scoot it around the desk with ease. The left and right buttons are conveniently placed, but the additional buttons below the scroll wheel are a bit of a pain to access quickly. I also wanted to give props to Speedlink for making a great software package, particularly the macro editor, which came in handy for automating a few dull parts of my job. The mouse looks good too, which is always a small bonus for bringing shiny gaming-grade tech into the boring office world!

I planned to test the Z-9 in Fallout 4 in a specific two hour window, seeing how it performed in a range of different tasks that you’re asked to complete during the game. Of course, this being Fallout, I played for about twice that length and went to bed at 3AM. Ah well – more time is better, right?

I found that generally, the mouse was up to the task. I felt my accuracy outside of VATS was a little worse than with my daily driver, the SteelSeries Sensei, but it was still quite manageable for a single-player title. The mouse was comfortable too, even over the length of my inadvertent four hour Fallout 4 session. 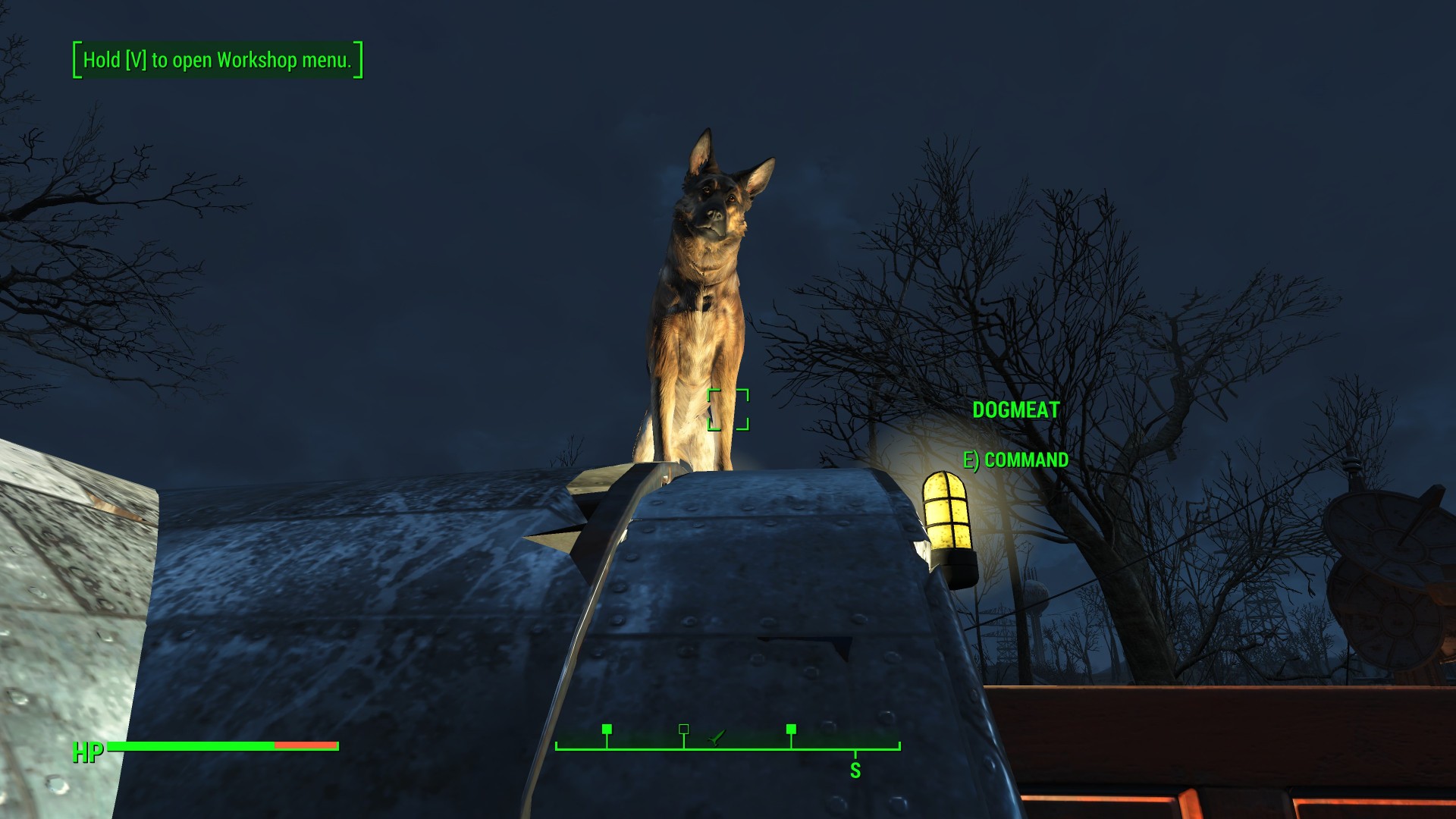 Interestingly, the mouse felt almost too slick in some situations, particularly on the metal mouse pad that I’ve used for the past couple of years. Having too much friction is certainly a bad thing, but having so little also feels unusual. Hopefully the mouse becomes a higher coefficient of friction over its lifetime, but at the moment it feels a bit uncomfortable for that reason.

The big test for me is always Counter-Strike: Global Offensive. Competing at a reasonably high (non-pro) level requires good equipment throughout, and the mouse is perhaps the most important factor. Being able to out-aim your opponent is a large part of the game, and a better or worse mouse can change the outcome of each 1v1 you take, which of course has a big impact on the rest of the round.

Compared to other gaming mice I’ve tried, the Z-9 comes in the middle of the pack. The sensor feels accurate, with reasonably low acceleration, and the lightweight body ensures I can make large movements even at low sensitivity settings. 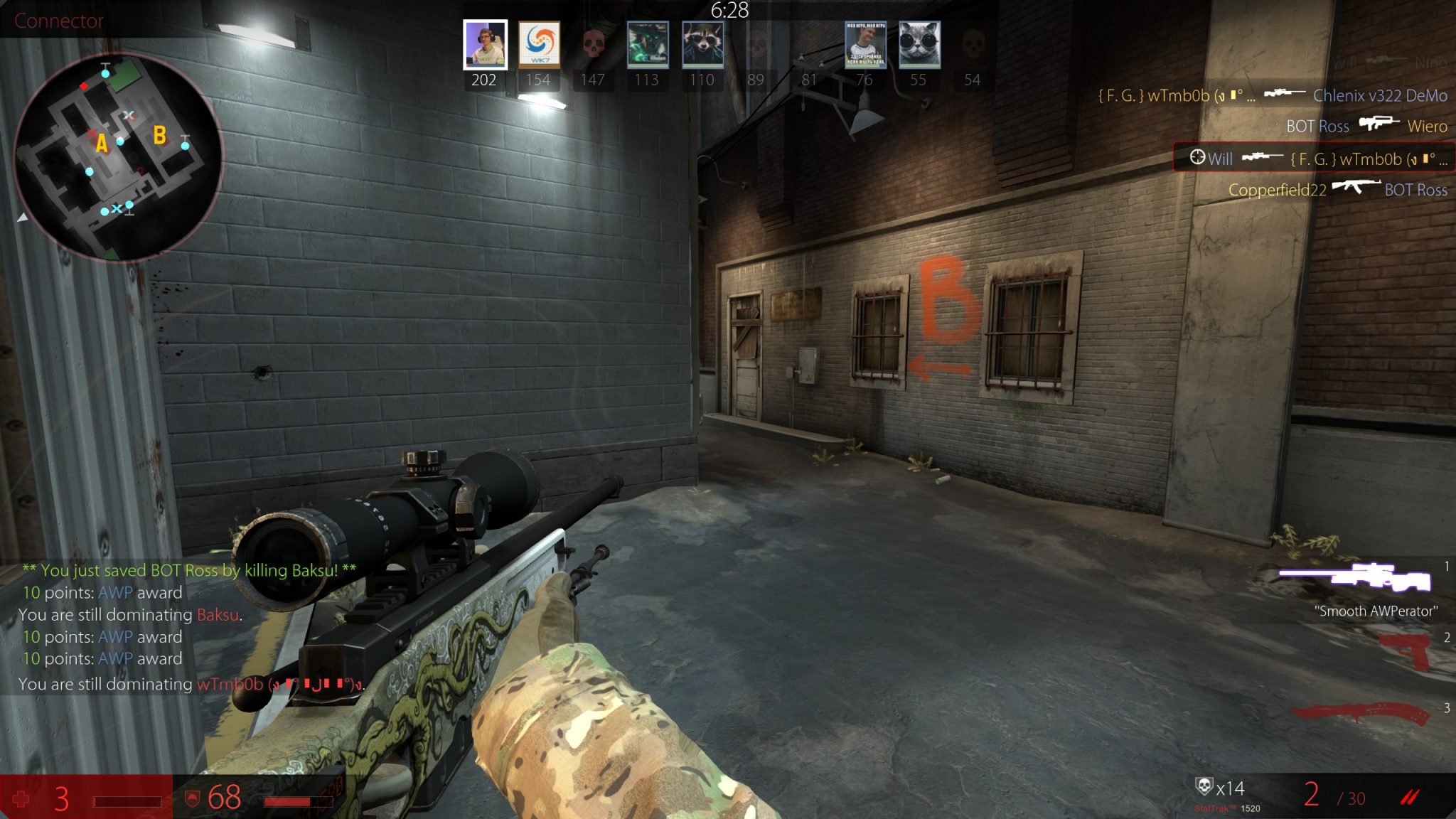 What lets it down is its tendency to continue gliding after I’ve intended for the movement to come to a stop; it often feels like there is a bit of tension in the cable that only resolves itself when the mouse is released. This means that I’m a little bit inaccurate in each encounter, and that means some engagements go much worse as a result. I’ve tried moving the mouse cable around (perhaps I need a bungee?) but I can’t get it into a position where this behaviour is entirely eliminated – and I think that’s largely down to its super-slick skates.

Another issue is the lack of grip on the sides. While the shape of the mouse provides something to hold onto, I would really like to try the same shape with some additional texture, some additional grips on each side. The right side feels particularly smooth, and that means a loss of control. Picking up the mouse (as you would for a particularly large motion) is also more difficult, with the mouse dropping back and to the right when it’s lifted. That means you need to make some extra adjustments upon placing the mouse back down, and again you lose a bit of time and accuracy. 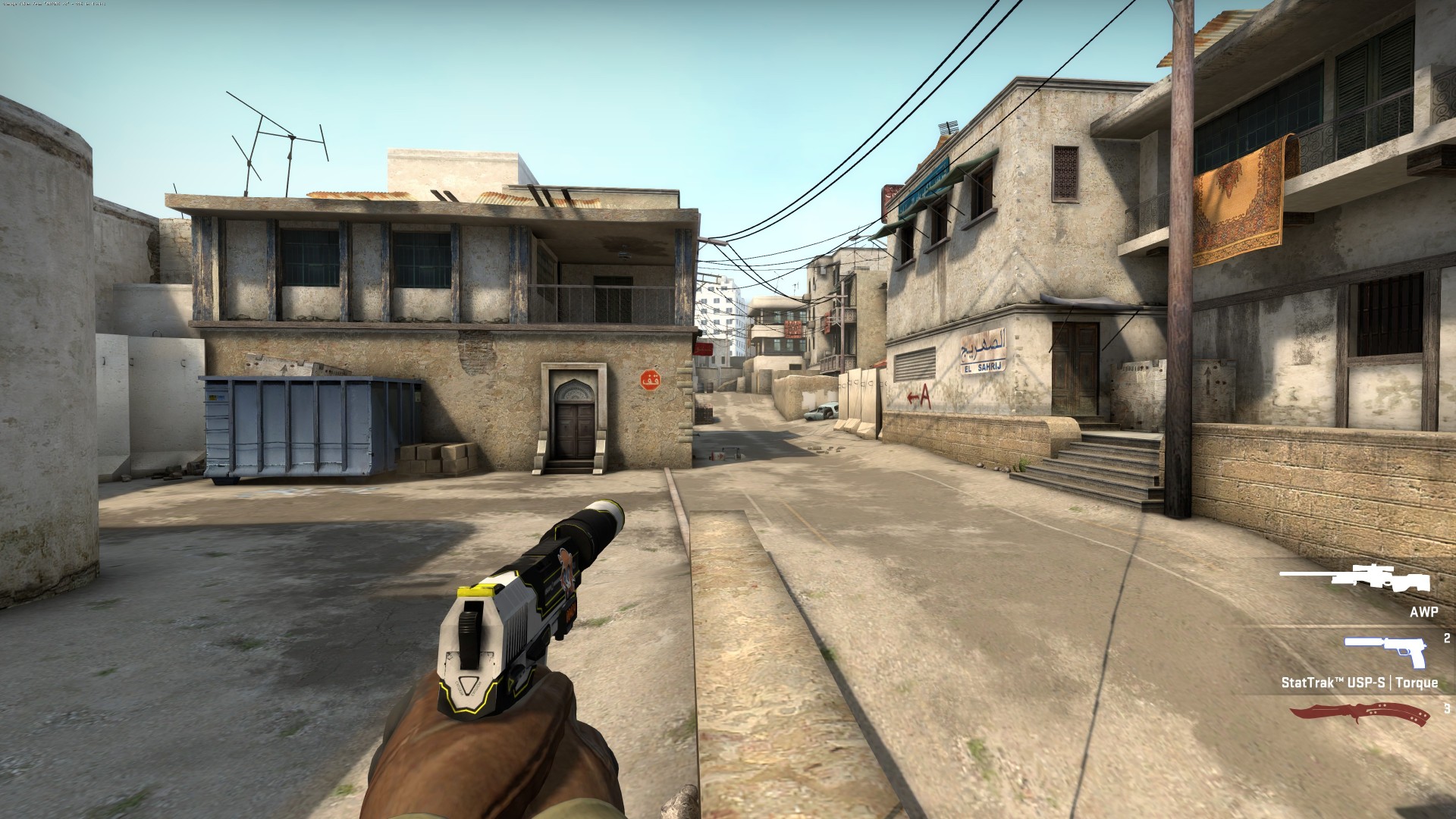 There’s a lot to like about the Speedlink Kudos Z-9: it boasts a powerful laser sensor, it’s backed with excellent software and its scarlet livery looks great. If you’re not playing competitively and/or you prefer high sensitivities, it’s a great low-cost mouse… but for competitive multiplayer games, it feels a little too inaccurate. I’d like to see Speedlink revisit the concept with less slick skates and additional grip on the mouse, as I feel there’s a lot of potential here for a great competitor to bigger names in the gaming peripheral industry.

The HP255 G3 is a low-cost AMD-powered laptop, provided this time with Ubuntu Linux from Ebuyer. It’s...