Shuttle are well-known for their compact PCs, whether sold as cases or barebones systems. Today we’re looking at the latter, as we review the NC01U Mini-PC. This tiny half-litre system can fit your own choice of components, including a ULV Intel processor, DDR3L RAM and a solid state drive, so you can equip it to serve in a number of roles: portable workstation, old-school gaming PC or media machine.

The Shuttle is a convincing mini PC, packing in a lot of power and connectivity into a small space. If you want to build your own portable media server or workstation, this is a pretty cool way to do it.

The NC01U is sold barebones, meaning you’ll need to supply your own RAM and hard drive. The NC01U version comes without a processor as well, and can fit any ULV processor from Celeron to Core i7. 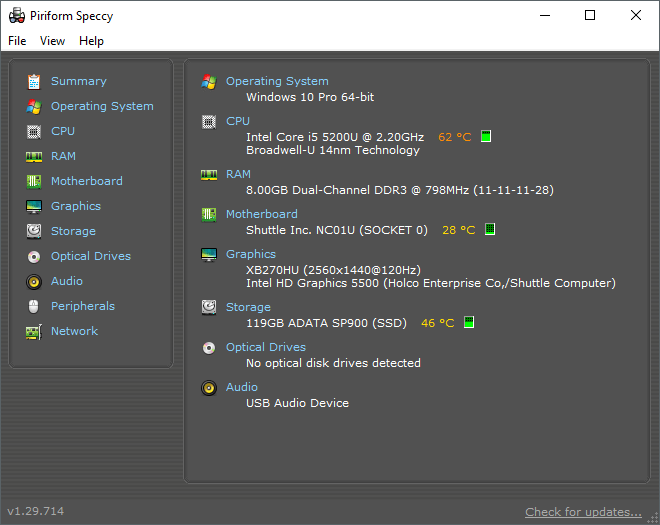 We’re looking at the NC01U5 version, which comes with a dual-core Core i5-5200U processor (and an integrated HD Graphics 5500 GPU) pre-installed. Our particular unit came with 8GB of Crucial DDR3L PC3-12800 memory and a 120GB ADATA SP900 solid state drive. You could also fit an M.2 drive if you preferred.

This is a tiny PC, measuring just 141 millimetres square and 29 millimetres deep for a total volume just over half a litre; by comparison our XSR test rig is housed in a 73 litre NZXT Phantom 530. It’s light too, with the system itself weighing about a third of a kilogram (plus your choice of components).

The front of the NC01U has a pair of USB 3.0 ports and an SD card reader on the left, and a power button on the right. The left side has vents and a serial port.

The back of the Shuttle contains most of its ports. We’ve got a power input, a mini DisplayPort 1.2, HDMI 1.4a, ethernet, two USB 2.0 ports and a headphone jack.

The bottom of the Shuttle includes 75 / 100 VESA mounting holes.

There’s also an expansion slot here, which allows the connection of three specially made Shuttle modules. 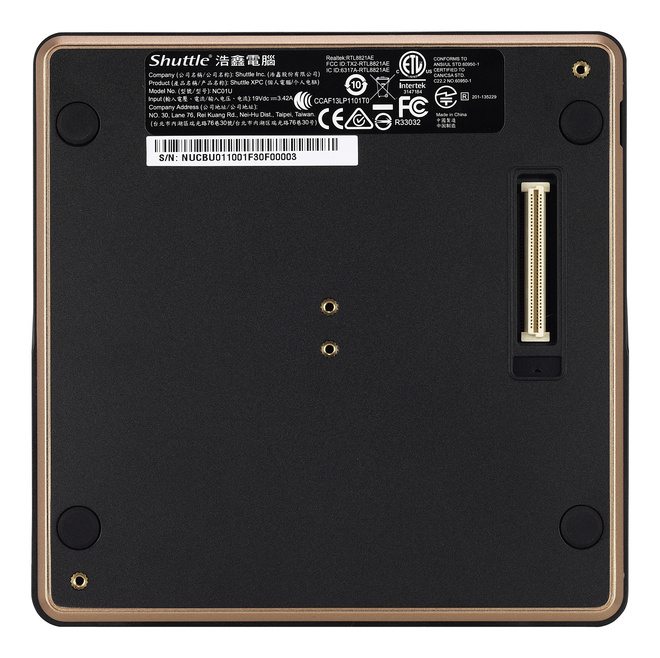 Inside, we’ve got space for two DDR3L RAM sticks, one SSD and one 2.5-inch HDD or SSD. The motherboard provides Wi-Fi ac and Bluetooth 4.0 as well. A CPU fan keeps the system cool, but its small size means it spins quickly; this leads to more noise than a larger fan that spins slower. 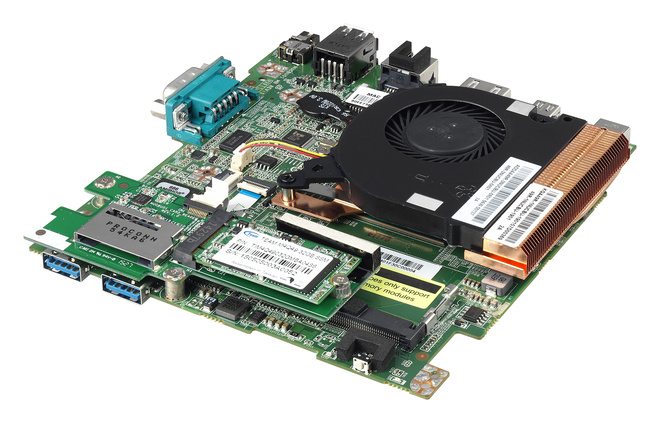 It’s an impressive piece of engineering, particularly given the connectivity included.

We used the Shuttle NC01U for a period of a week as our main work PC, including the whole process of writing up this review. We also tried it in a few games and spent some time watching videos, both online and downloaded locally. Here are our thoughts, starting with the initial setup process.

Installation is pretty straight-forward: just open the case by removing a few screws hidden under two of the rubber feet, and pull off the lid with your fingernail. Remove a couple extra screws to allow the main board to be freed, taking care to unplug the wireless antennas before doing so. 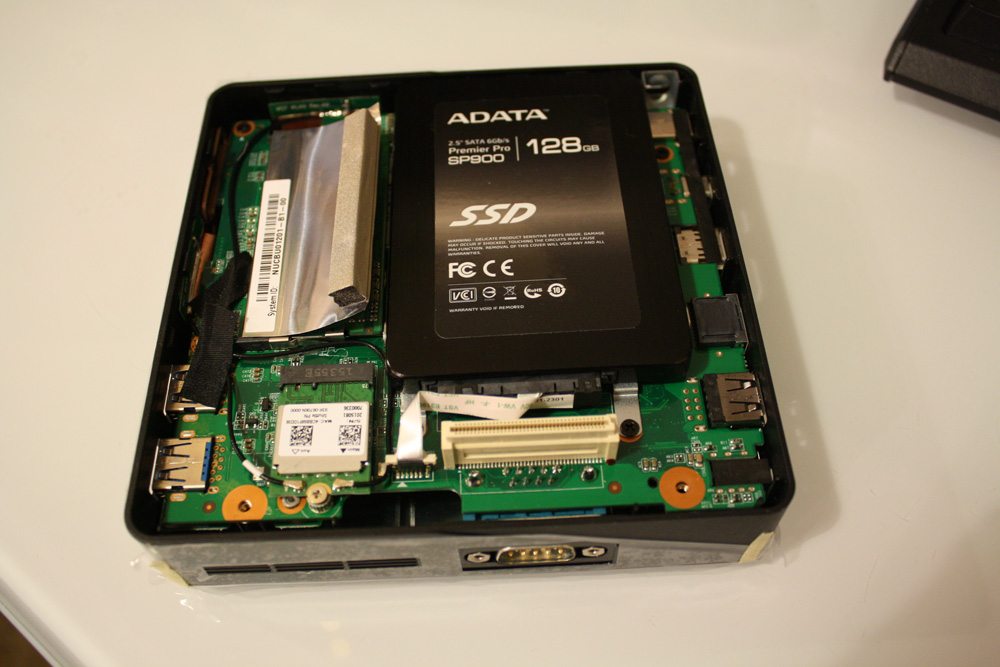 Add in your RAM (one on each side) and storage (2.5-inch SSD or HDD, or M.2 SSD). Screw everything back together again and remember to plug in the wireless antennas. After this, connect it up to a display and peripherals, including a USB stick with your OS of choice (we opted for Windows 10). Boot from the USB stick, install your OS, and you’re golden. Windows 10 included all of the drivers we needed, but the NC01U also comes with a driver CD if you need it. 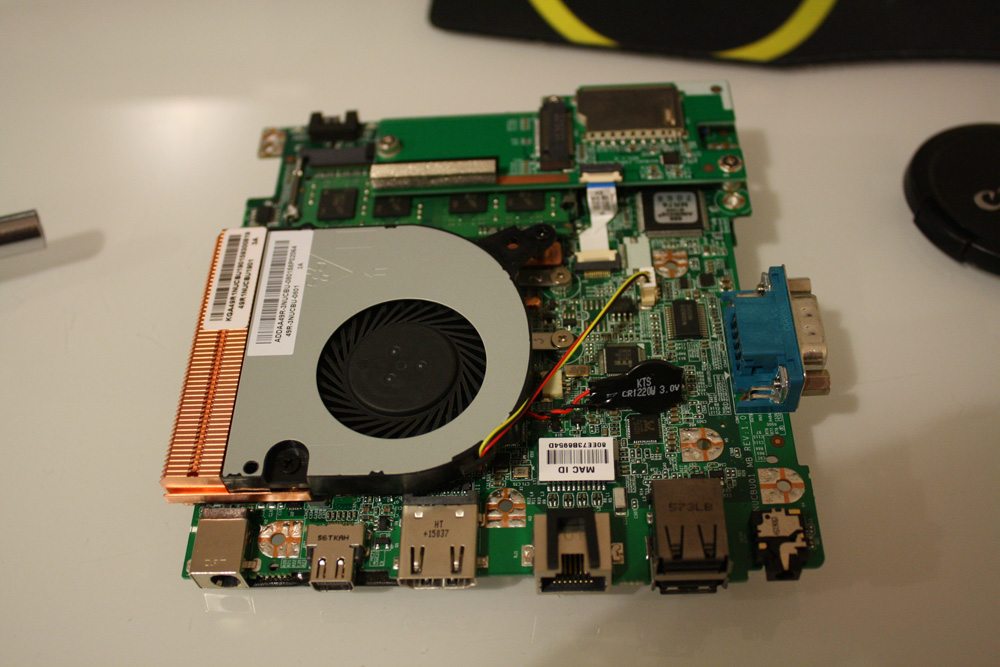 The whole process took about an hour, and it was pretty straight forward (if a little fiddly in some places). Proceed calmly and patiently, and you should have no issues. 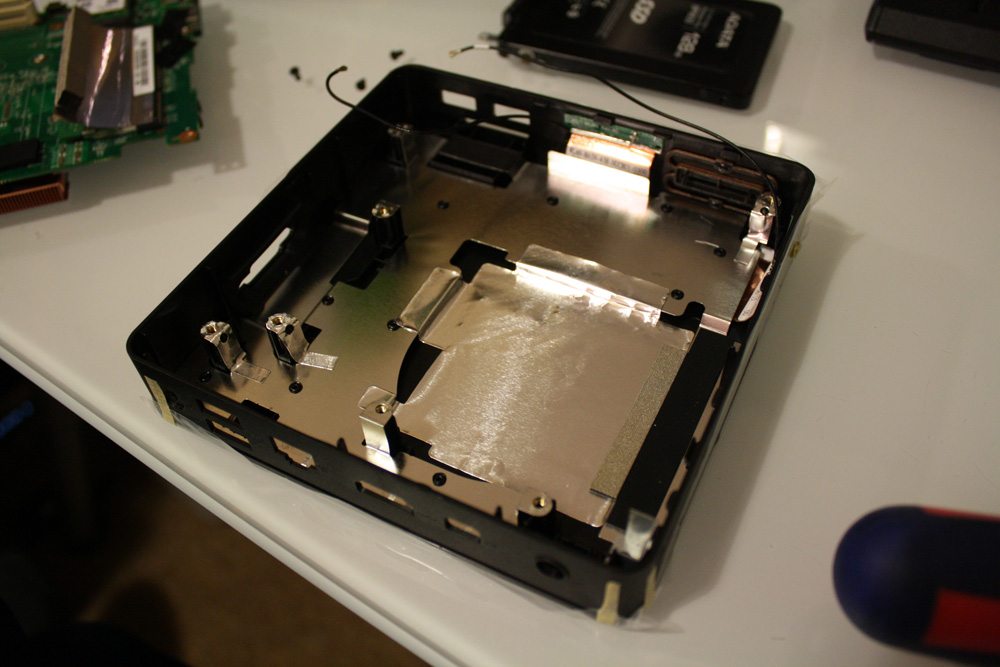 The Shuttle was more than capable of juggling a dozen or so Chrome tabs, with its Core i5 ULV processor and 8GB of RAM. The gigabit ethernet and Wi-Fi ac also helped here, ensuring that all but the heaviest web pages loaded rapidly.

Connectivity was another strength of the machine. We were able to easily plug in sufficient peripherals, including a 2560 x 1440 monitor at 120Hz, mouse and keyboard, USB drive and headset.

The only real issue we uncovered was the system’s noise; you can definitely hear that CPU fan spinning away during even light use. This noise should be minimised if you keep the NC01U mounted on the back of your monitor or beneath your desk, but make sure the mini PC has enough ventilation when it’s in use.

The Shuttle was able to handle playing back 1080p video without an issue, whether streamed online from Twitch and YouTube, or played locally. Given its gigabit ethernet and Wi-Fi ac, and the potential to fit a large 2.5-inch HDD, the NC01U could make an excellent media PC, whether you’re connecting it directly to a display via mDP / HDMI, or streaming to a set-top box or games console.

We’re a site by gamers and for gamers, so of course we had to test the Shuttle’s performance in-game. Our benchmarks had already informed us that 3D gaming would be a challenge, so we played older 2D titles. Super Hexagon, StarCraft: Brood War and FTL all worked great, so gaming is at least possible here – yay! 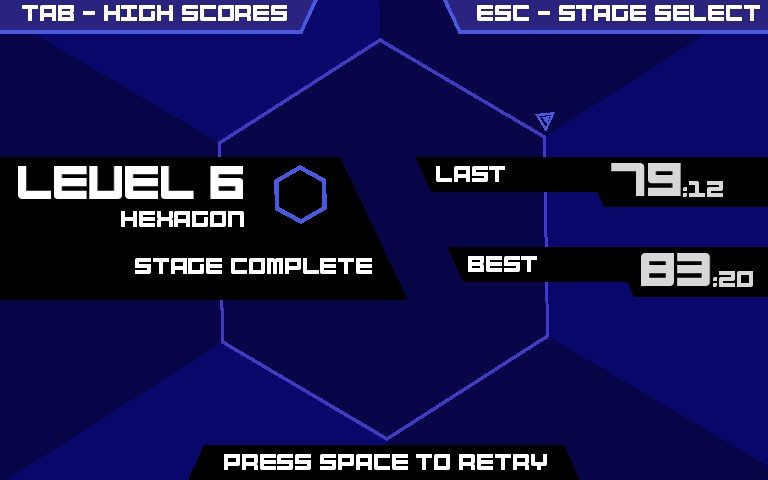 The performance of the NC01U will obviously change drastically depending on the components you use, but it’s still interesting to see what the Core i5 5200U processor is capable of in this chassis, when backed with adequate RAM and a decent SSD. We’ll go a little lighter on the benchmarks than we would for a gaming laptop or desktop, though. 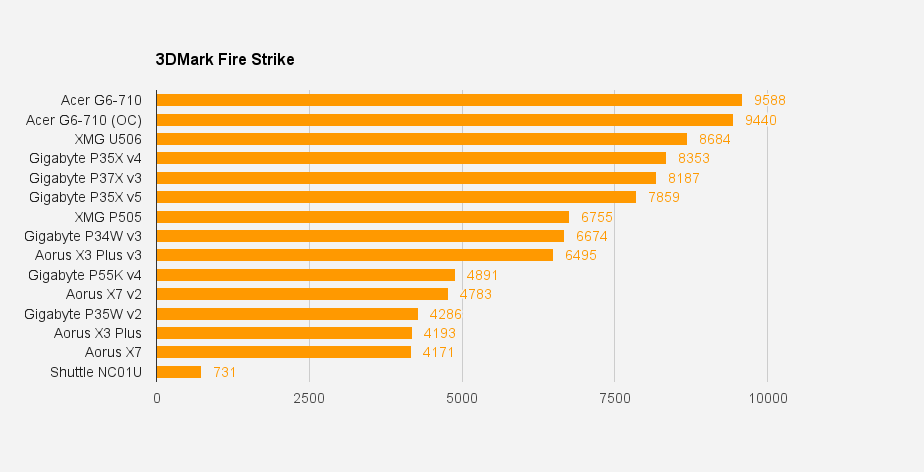 Our first test is 3DMark, a graphically-demanding benchmark suite that attempts to emulate a video game. There are a few different levels of the benchmark, but we’re most interested in the most demanding Fire Strike level. Here, we can see how the Shuttle compares to recent gaming laptops… and unsurprisingly, the results aren’t favourable. 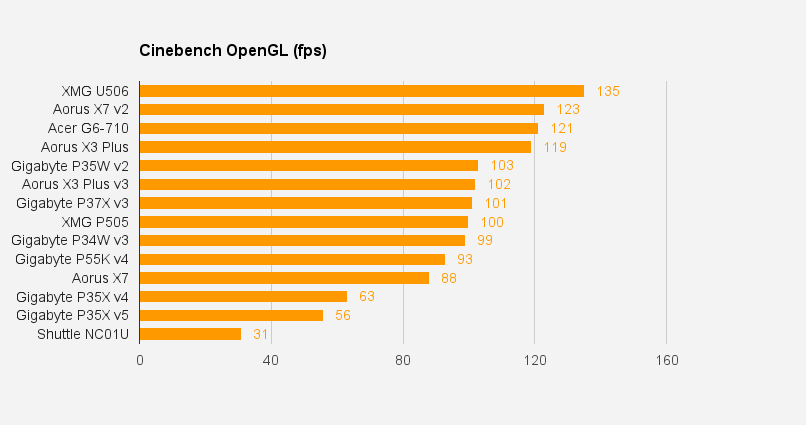 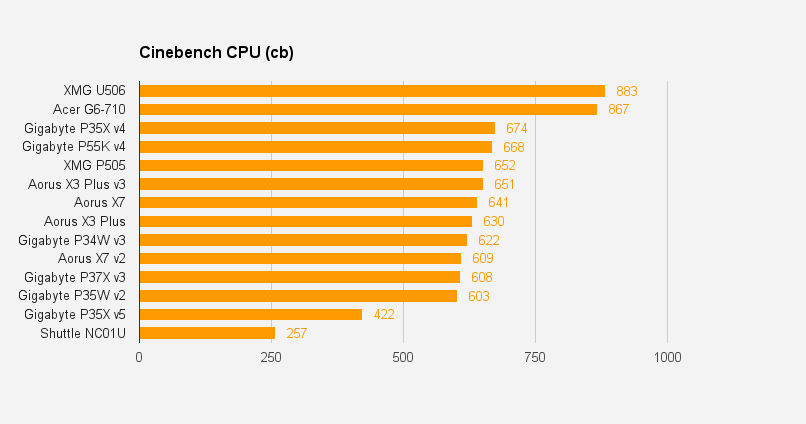 Cinebench is a test that looks at CPU and OpenGL performance. Both test results are about half that of the P35X v5; 3D gaming isn’t likely to be possible here. 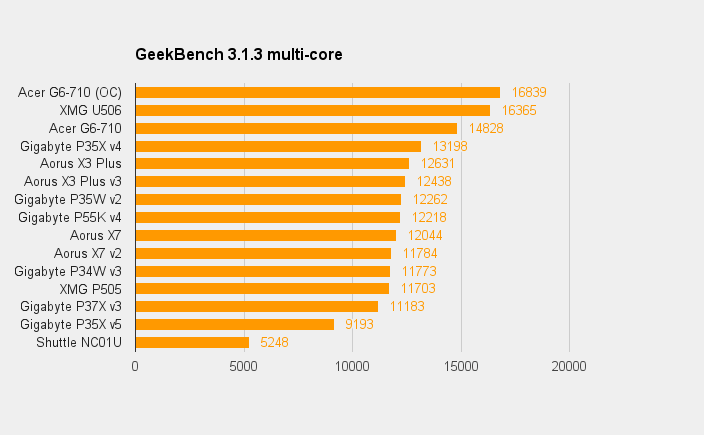 GeekBench is an interesting benchmark that measures CPU performance, both single-core and multi-core. The dual-core, quad-thread CPU here isn’t super powerful, but it still records a reasonable result against its much tougher laptop opposition. 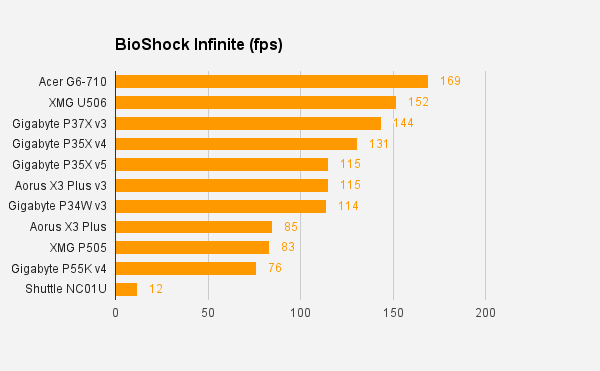 Bioshock Infinite is our most forgiving game benchmark, so we thought it would be perfect for the Shuttle. At 1080p and high settings, we got a meagre 12 fps. Turning down the settings to ‘very low’ got us up to 23, and also dropping the resolution to 720p brought us to a playable 45. The game doesn’t look great, but it is technically playable, and that’s pretty cool for the size and cost of this system.

The Shuttle NC01U is a well-connected mini PC, capable of providing sufficient performance for web browsing and media use. Older (or indie) games can work well too, but more modern 3D titles are unfortunately ruled out by the weak integrated graphics. The NC01U is impressively compact, and certainly suits use as a media system or portable workstation. Above all else though, it’s just cool to have a working PC in a case so small!

Around the turn of the millennium, my dream was to own one of the cool gaming desktops I’d seen in PC...

Best Bluetooth speaker ever? The iClever Outdoor Wireless Speaker just might hold the title, thanks to its...