PC gaming is brilliant, but it’s not always the most social experience — often you’re cooped up in the darkest room in the house, away from friends and family while indulging in your hobby of choice. It’d be nice to take your computer into the living room and have your friends check out your progress, but outside of a few controller-friendly titles you’re not going to have a good time using a keyboard and mouse on your lap.

That’s why Roccat have developed this ‘lapboard’, essentially a platform for your keyboard and mouse that is fully couch-compatible. It’s called the Sova, and it comes with an integrated mechanical keyboard, mousepad and wrist rest. Let’s take it for a spin and see whether PC gaming can be a more social activity!

The Sova is a comfortably expansive device, spanning the width of an average couch cushion. It’s divided into three zones, with an integrated keyboard in the upper left, a palm rest in the lower left and a mouse pad on the right side. The palmrest and mousepad are formed from plastic panels, which can be removed by pushing them up from the bottom. This presumably opens the door to functionally or aesthetically different alternatives, perhaps even made by third-parties or 3D printed at home. 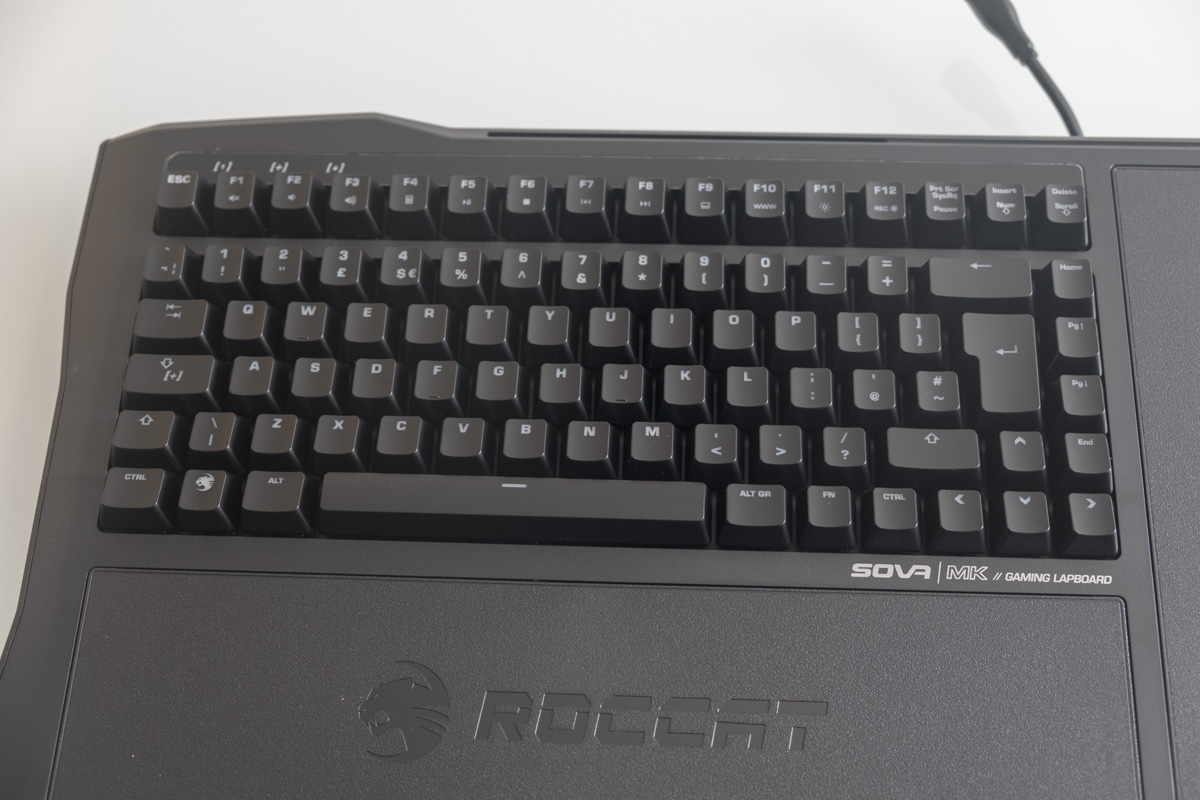 The Sova’s integrated keyboard is offered with membrane or mechanical key switches; our unit is mechanical with Brown Cherry-MX-style switches from TTC. The keyboard is backlit with blue LEDs.

The keyboard uses a compact 75% size layout, as shown above and as explained below from this guide to keyboard sizes by The Keyboard Company.

75% keyboards are popular because they only shrink or remove a few keys compared to a TKL; most of the space saving is done by reducing the gap between different areas of the keyboard and placing keys like Insert, Delete and Home in a single column on the right side of the keyboard. However, these changes mean that finding replacement keycaps is sometimes difficult.

The Sova is supported by four cushions which clip into the underside of the unit, allowing the unit to lie flat on your lap without discomfort. 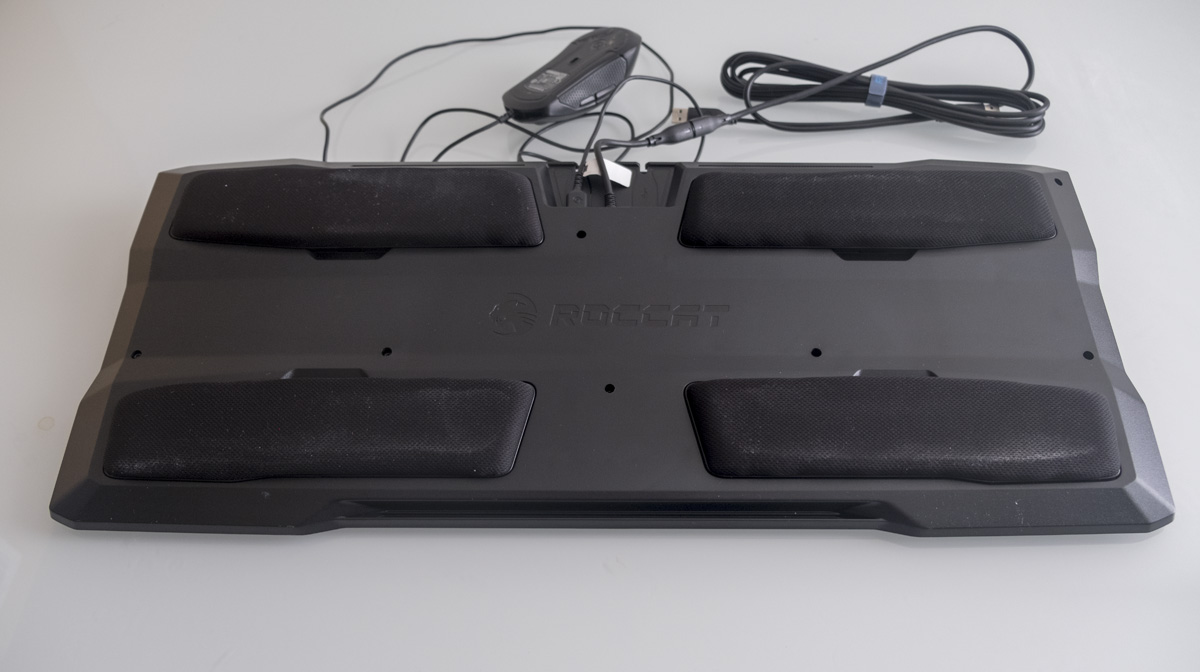 A four metre cable connects the Sova to your computer, including the integrated keyboard and two other USB peripherals (e.g. a mouse and headset). Routing options are provided to keep your cables tidy, including a mouse bungee that can be placed along the periphery of the Sova to meet your needs. 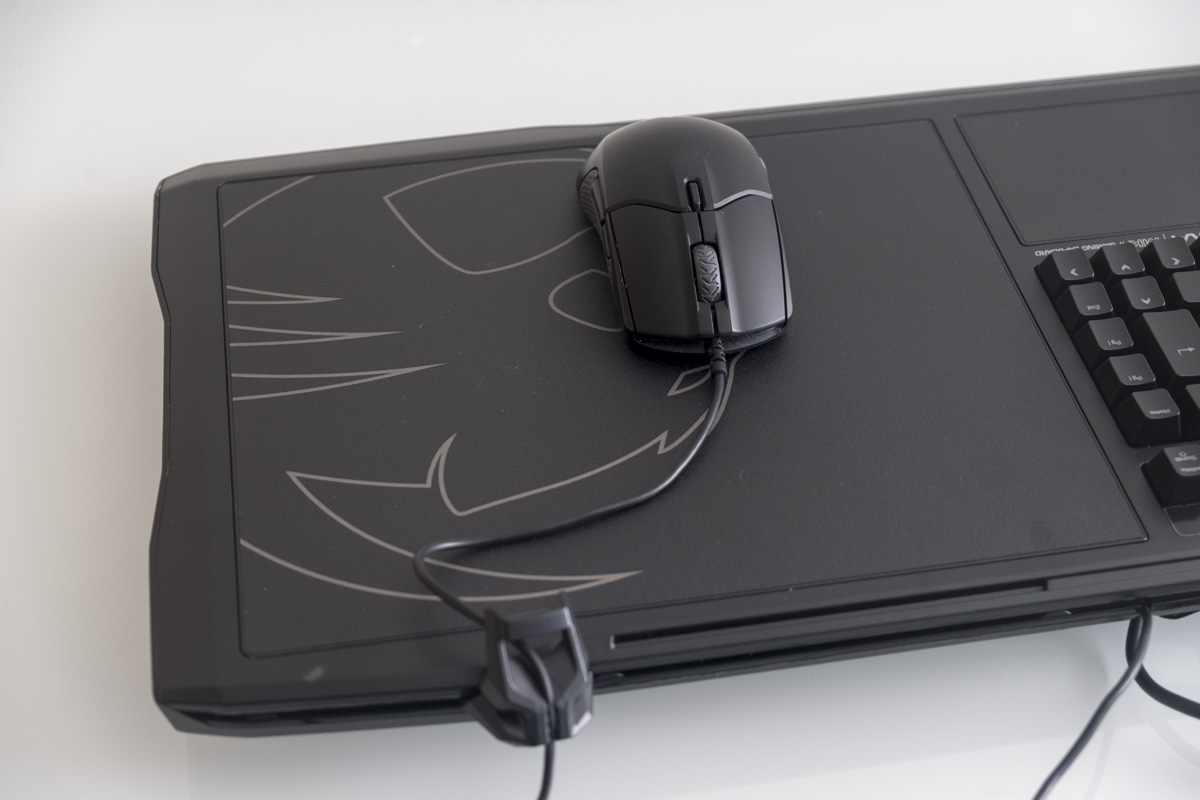 As the Sova is essentially just a really big keyboard with two passthrough USB ports, it doesn’t require any special software to work (although you can use Roccat’s Swarm software to adjust the backlighting, remap keys and perform other tasks.

We used the Sova for a period of three weeks, sitting on the sofa to play games like World of Tanks in the living room and checking out BattleTech and other titles in front of our office projector (review forthcoming, natch). Here are our impressions.

First of all: the one non-replaceable element of this setup, the keyboard. I found the TTC Cherry-MX-style mechanical switches were responsive, yet slightly scratchy and less satisfying to use than those made by more well-known vendors like Cherry or Kailh. We also noted a definite ‘ping!’ noise as the key switches rebounded; happily this is only really noticeable when you’re typing in silence, any background music covers it up immediately. Despite these minor flaws, the light actuation force and tactile characteristics of the mechanical switches used here felt well-suited to both playing games and typing. 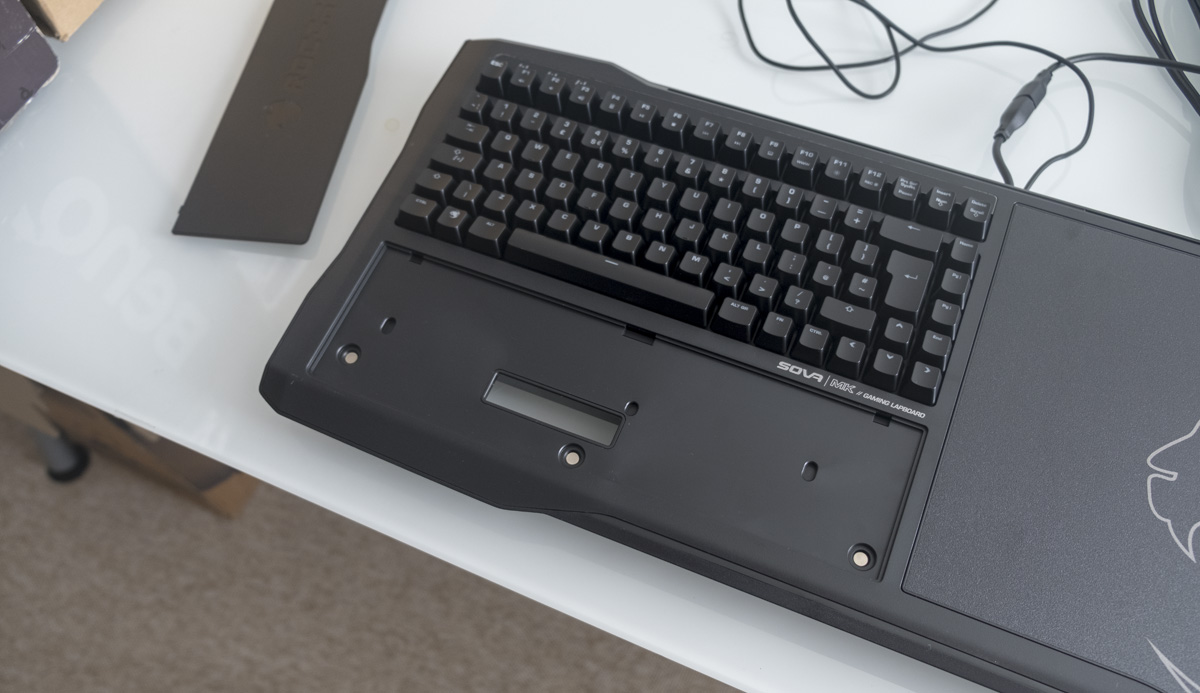 I think the layout of the keyboard is particularly well-chosen; it’s compact but still includes all keys sans the number pad, ensuring simulators and other in-depth titles can still be played without issue.

If you do need a numberpad, you could probably get a standalone mechanical number pad for £20 and fit it onto the mousepad area and still have enough space for your mouse.

However, the custom layout does mean that most aftermarket keycap sets won’t fit exactly; you’ll likely need to leave some of the original keycaps in place or deal with keys having the wrong labels.

The only other flaw I can identify with the keyboard is that you can’t change the backlighting style without installing the Roccat Swarm software. There is a button that has a sun symbol on it, but it doesn’t appear to do anything. Out of the box, our unit had a ‘breathing’ lighting scheme that periodically dimmed and brightened, and not being able to change this to simply ‘always on’ or ‘always off’ was annoying. 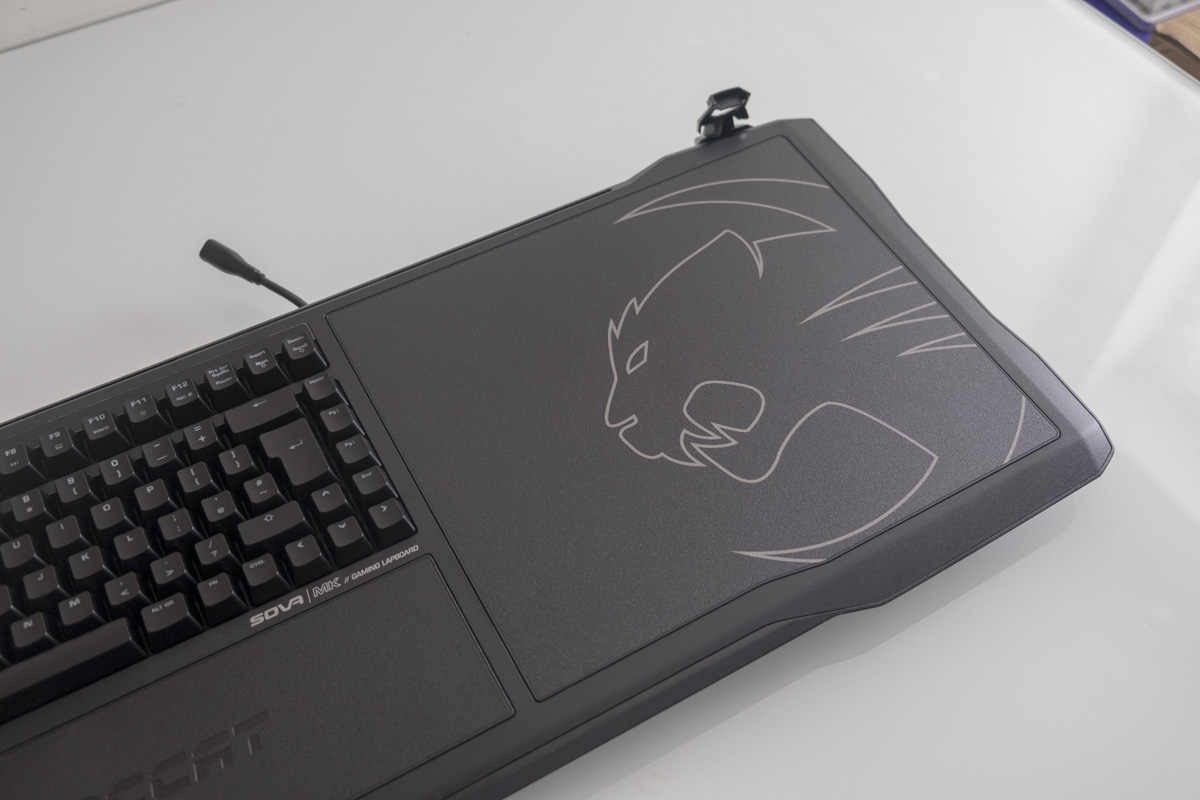 The next part of the Sova is its integrated mousepad, which is made from some kind of plastic composite. Whatever its composition, the mousepad is a reasonable size for all but the lowest DPI gamers and seems to track well with both laser and optical mice. I prefer a fabric mouse pad, but this hard unit is absolutely usable — and you can always add your own mousepad on top if you prefer!

The mouse bungee was also handy for cable management. However, we ended up removing it so that the mouse and keyboard could be put away separately when the Sova wasn’t in use; having the bungee in place lengthened the put-away and set-up process unnecessarily.

Using the Sova is surprisingly comfortable. The cushions spread the weight of the unit across your legs, while still allowing for some much-needed airflow. The compact keyboard layout ensure that your arms can be held almost straight ahead, rather than being stretched out in either direction, and the height of the unit is just right too.

The only problems we encountered were ones of distance. Sitting a few metres from the fifty-inch television, we found most interface elements and distant enemies were hard to spot. Of course, this makes sense — when you’re playing at a desk, your monitor is going to be only a metre away from you at most, so seeing these details is easier. Therefore, it makes sense to compensate for this in two ways. Firstly, scale up the interface if you can, particularly if you’re playing at 4K rather than 1080p. Most games support this out of the box, it can be modded into others, and the remainder can be tricked by a lower resolution.

Secondly, you might want to stick to less competitive titles — think casual Overwatch rather than ranked CS:GO matchmaking, playing a (largely stationary) self propelled gun in World of Tanks rather than an ultra-mobile medium tank that requires constant attention. Turn-based or pauseable games, like Pillars of Eternity II: Deadfire or BattleTech also work great here, as you can take the time to talk to nearby friends and family without getting distracted.

Of course, the Sova isn’t just for PC gaming — it’s also a fast and comfortable way to queue up music or videos to watch on your TV, compared to relatively clumsy mobile and TV apps. You may need to find a spot to keep it — the sideways placement shown above doesn’t work too well with a mouse attached — but having it accessible can be something of a time saver.

The Sova is also a little messy. With three cables potentially in play — one from the Sova to your PC, one for your mouse and one for your headset — you need to rely on good cable routing to keep things tidy. You might consider a wireless gaming mouse or headset to maximise the portability of the setup.

We had great fun using the Sova, turning the traditionally solitary pursuit of PC gaming into a more social experience to be enjoyed with friends.

This lapboard is well designed and cleverly constructed, allowing for blissful couch-based PC gaming at a reasonable price. The mechanical keyboard is perfect for the demands of PC gaming and typing alike, while the expansive mouse pad works well with all of the gaming rodents we tried. We loved the pop-out design as well; hopefully we’ll see more accessories available in the future. Something like a cloth-topped mousepad or a foam-topped wrist rest would be awesome upgrades. 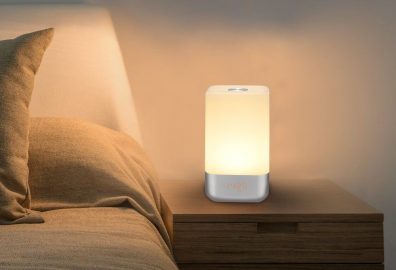 Tsumbay Wake Up Light MY-03 review

Over the past few weeks, XSR HQ has been awakened by a warm and gentle light. Here’s our review of the...

Today we’re looking at some special Lightning headphones for the iPhone and iPad which offer active...