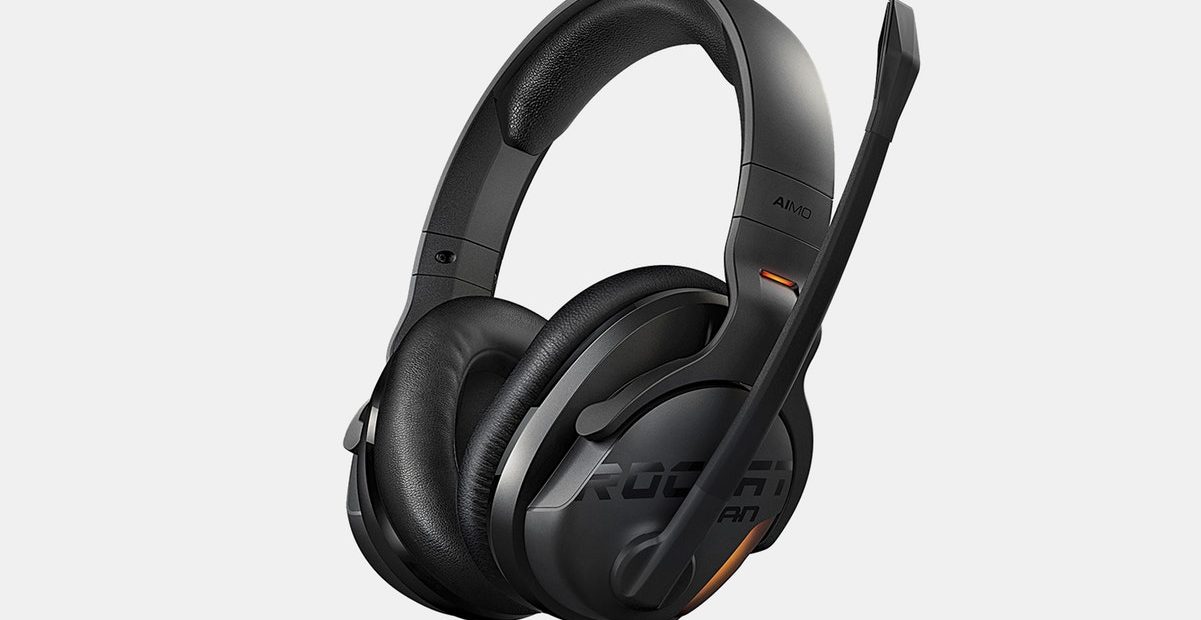 Today we’re looking at the Roccat Khan Aimo, a gaming headset that boasts simulated 7.1 surround sound, high-res audio support and full RGB lighting. It’s also the third piece of the Aimo RGB trifecta, the natural counterpart to the Horde Aimo keyboard and Kone Aimo mouse. We liked the Horde and adored the Kone, so let’s find out if the Khan can complete this peripheral triumverate on a high note!

The Khan Aimo looks like many other modern gaming headsets, with a matte black colour scheme enlivened by four LED strips which can be illuminated in a colour or spectrum of your choice. 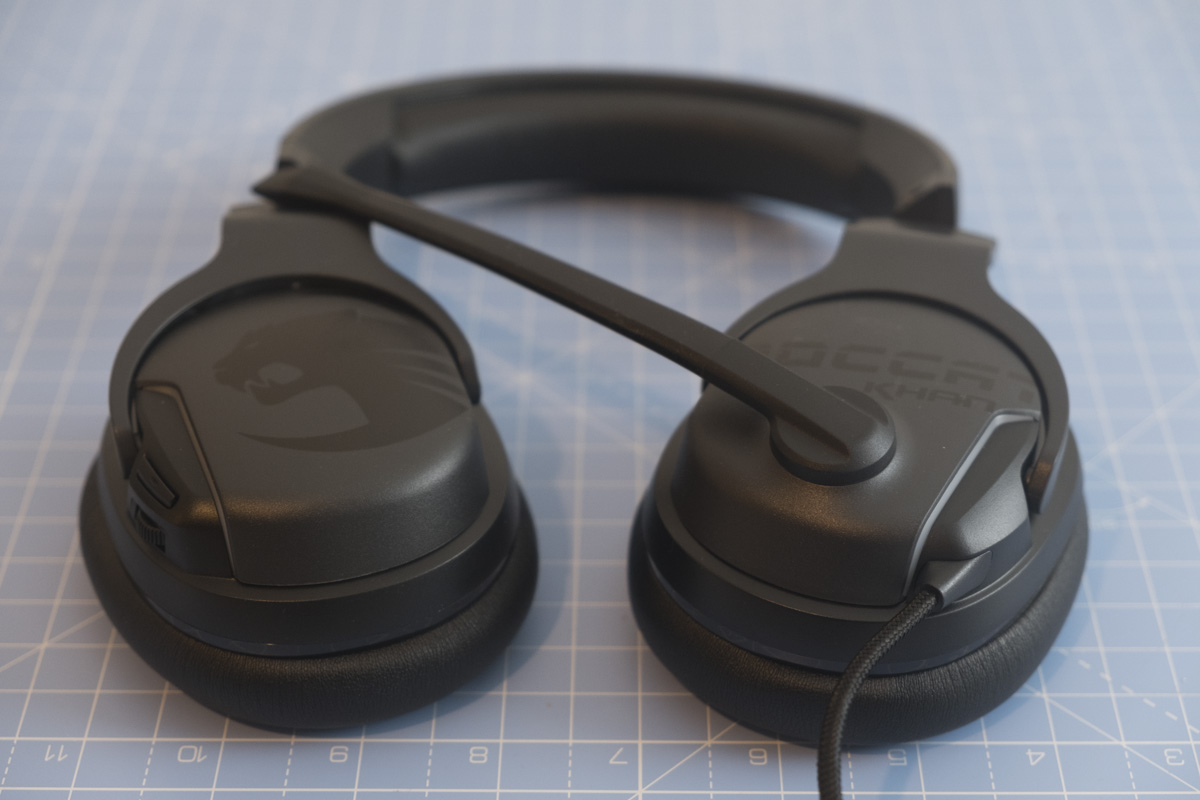 There’s one curvy LED strip on each earcup and a smaller LED strip near each headpiece connector, providing a bit of a light show to anyone sitting to your left or right. 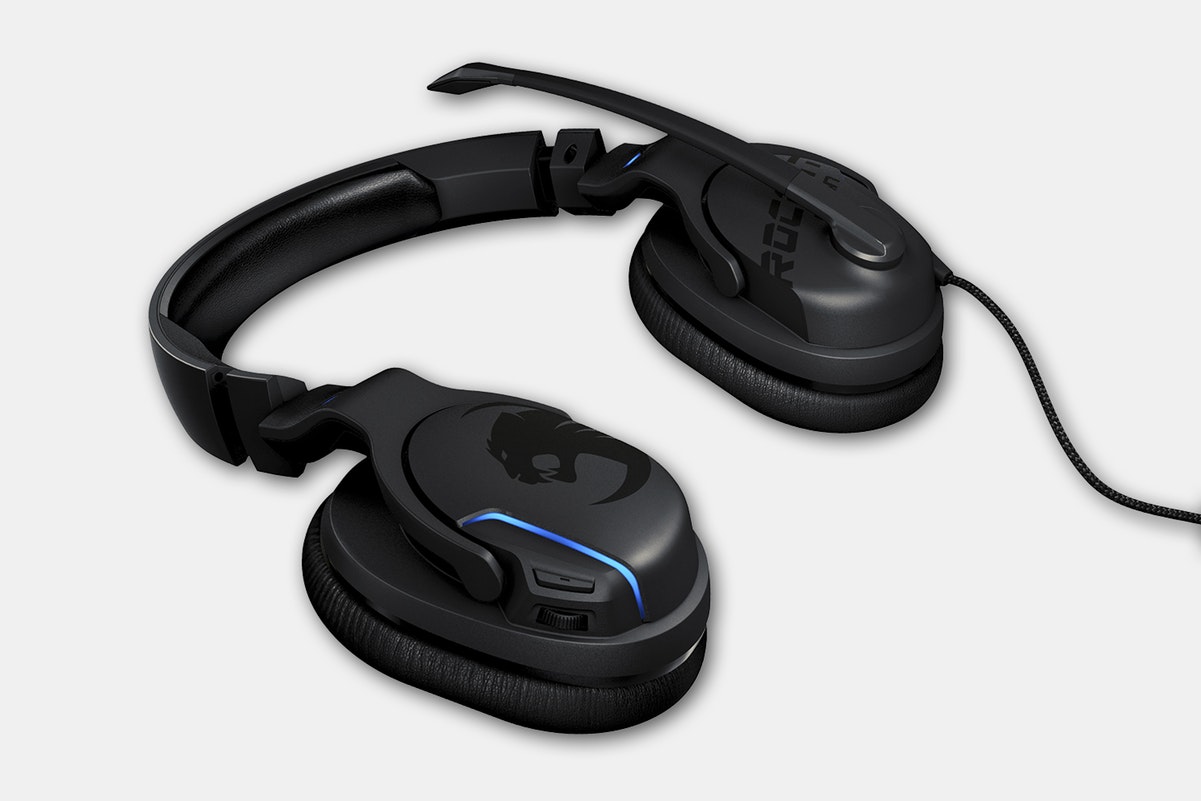 The Khan Aimo seems little more than just the Khan Pro with some RGB lights attached, but there are a few subtle design distinctions between the two models.

The Aimo model comes with a volume wheel and a surround sound toggle on the left earpiece, for one. The ear pads also look different, with the Aimo model having a smoother and more refined appearance compared to the ridges present on the Pro model. 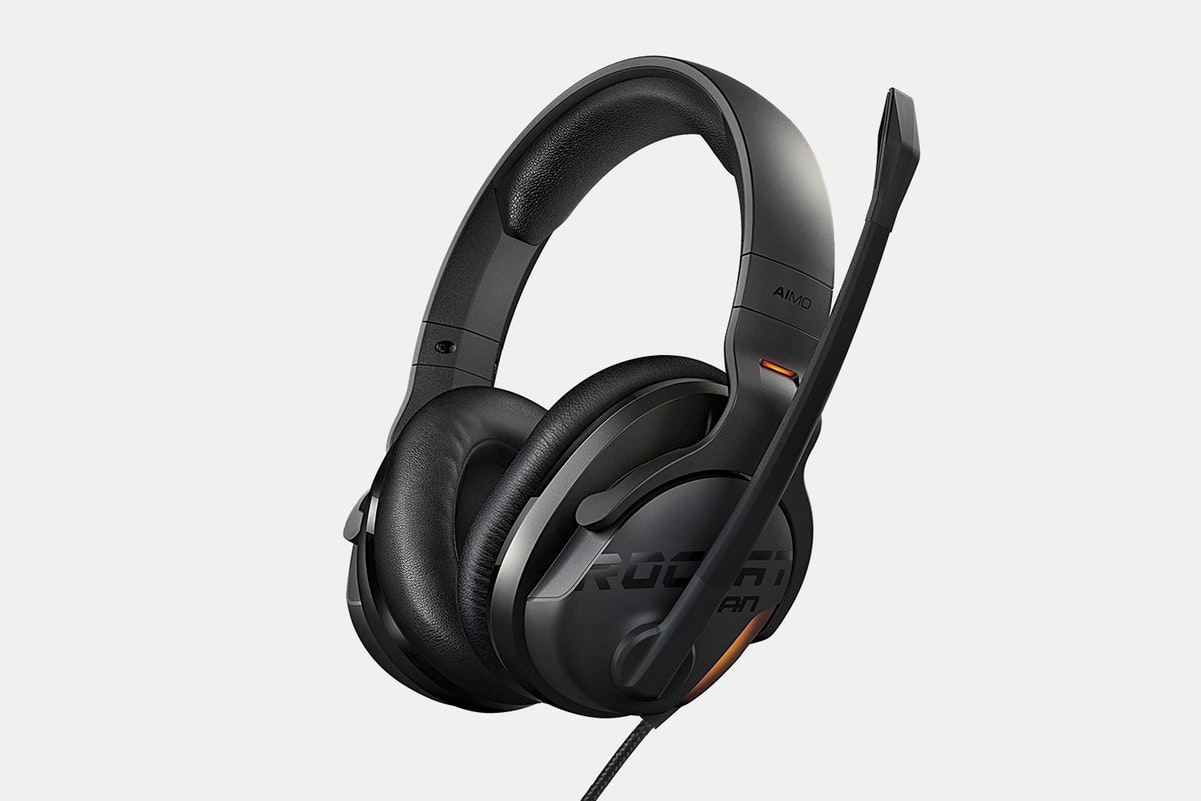 The addition of the controls and RGB lighting seems to have had a significant impact on weight; the Khan Aimo weights 275 grams compared to the 230 grams on the Khan Pro. That should make the Pro slightly more comfortable over the long term. Both models feel well-built and resistant to ordinary knocks and bumps, despite their largely plastic construction. 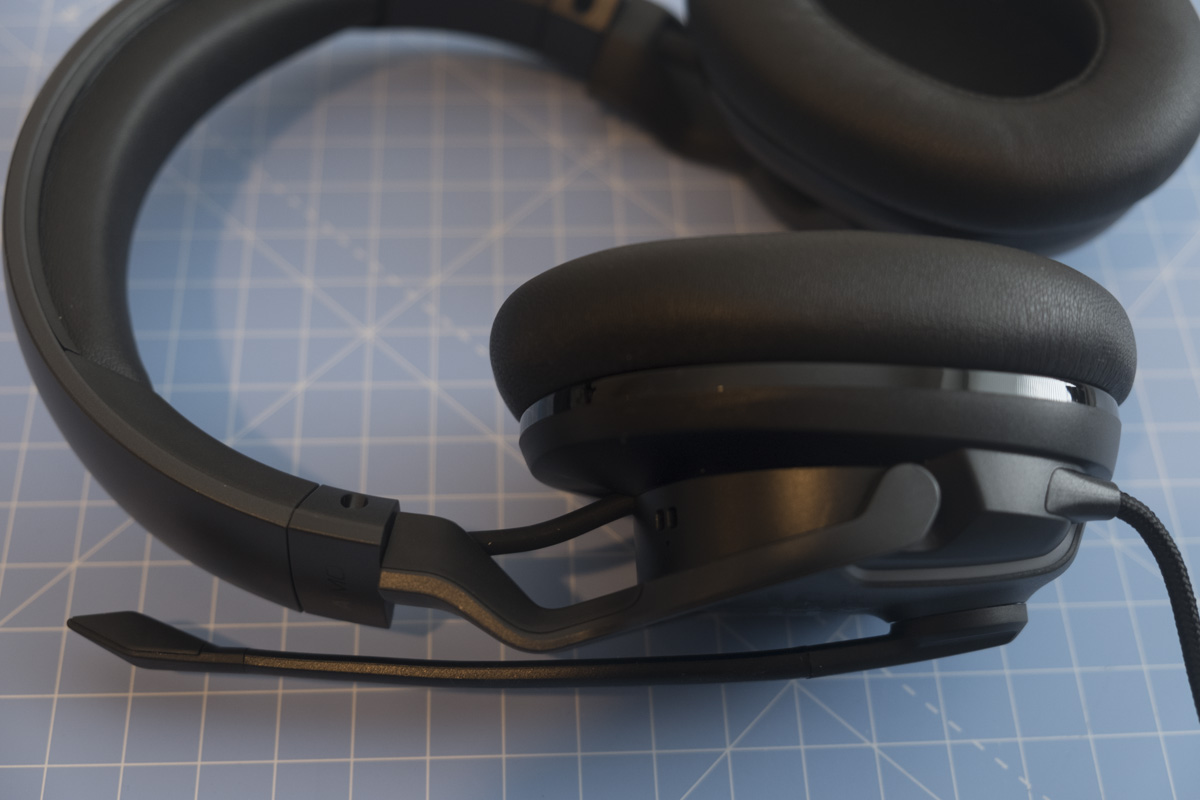 The microphone placed on the left side seems to sport the exact same shape as that of the Khan Pro, with a flexible plastic boom terminating in a vague diamond shape. The mic locks into place and automatically disables itself in its fully upright position, and can rotate about 135 degrees down. 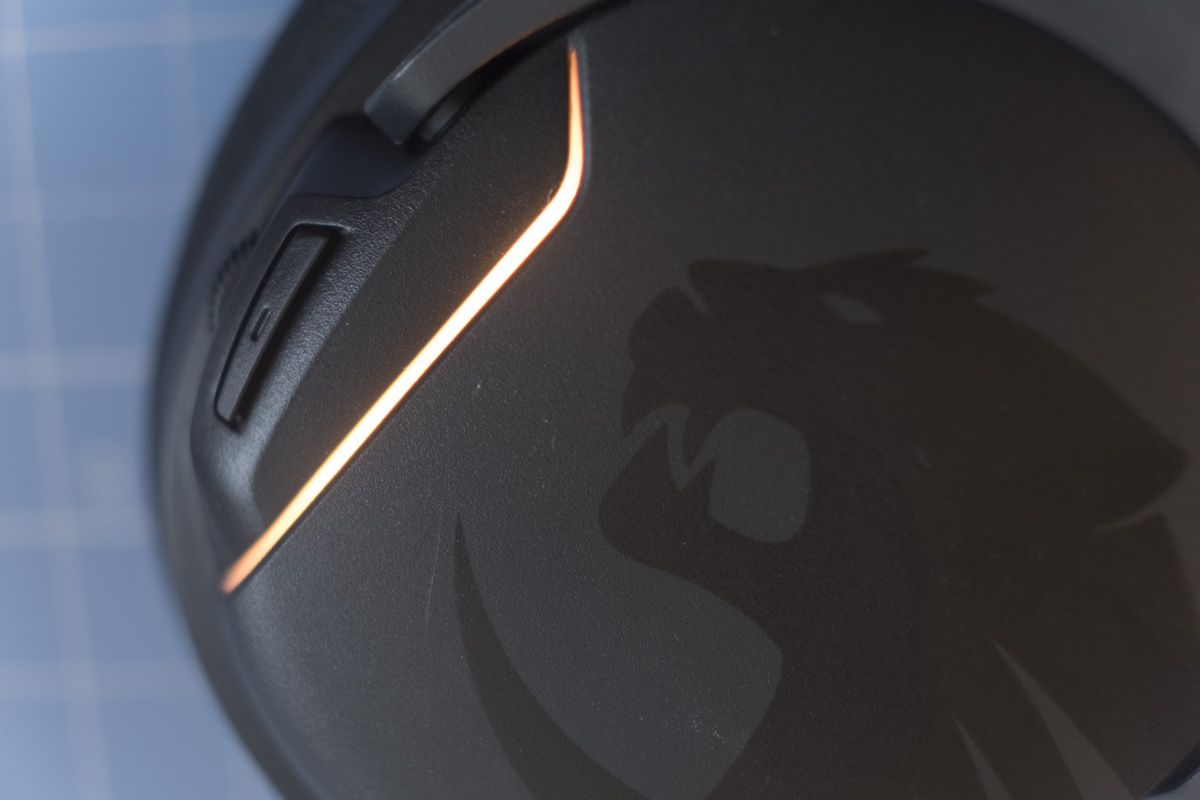 As with past headphones from this German company, we have the ferocious feline that serves as the Roccat logo on one earcup and the firm’s wordmark on the other. 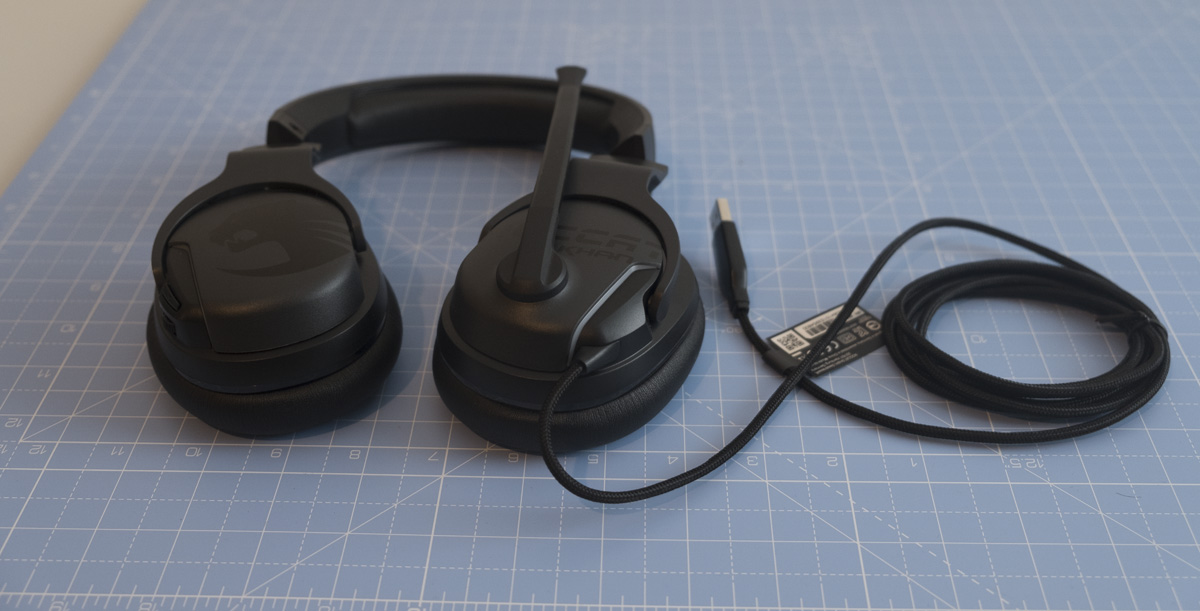 The microphone attaches to your computer using a 1.8 metre braided USB cable; this also necessitates the inclusion of a DAC as it doesn’t connect through your computer’s sound card. 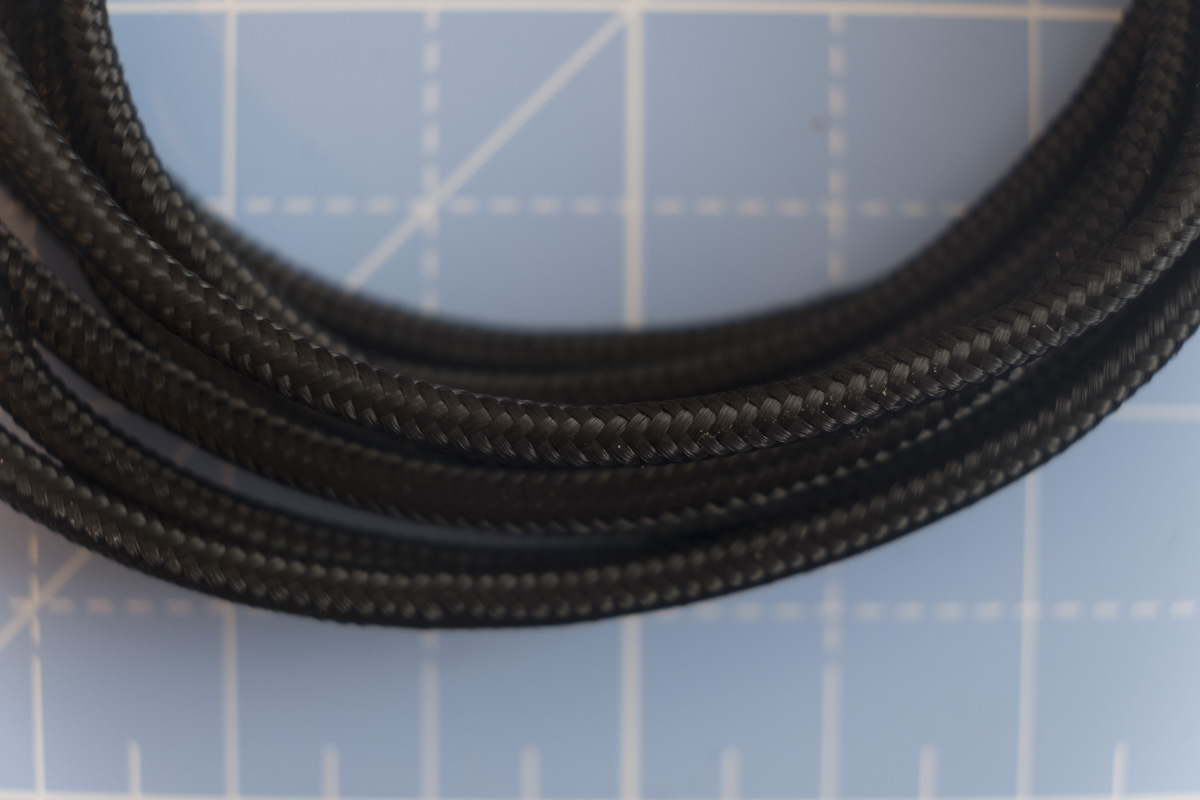 The overall design of the Khan Aimo seems quite reasonable; there are no glaring failures or oversights to be found in our hands-on examination. Let’s look briefly at the software side of the equation, before moving onto testing!

The Khan Aimo, like the other Roccat peripherals we’ve looked at recently, plugs into the Swarm app. Here, you can adjust the Khan’s audio playback settings, tweak the microphone and choose between several RGB lighting effects. We’ll cover each in turn so you get an idea of what to expect.

The first tab is represented by a pin icon; this gives you quick access to settings that you frequently adjust. By default, that allows you to toggle between native 2.0 and simulated 7.1 surround sound; you’re also able to opt for a clear or balanced sound profile. You’re also able to set the microphone sample rate, enable noise cancellation, adjust sensitivity and turn on the ‘Magic Voice’ feature which pitch-shifts your voice higher (female, cartoon) or lower (male, monster). 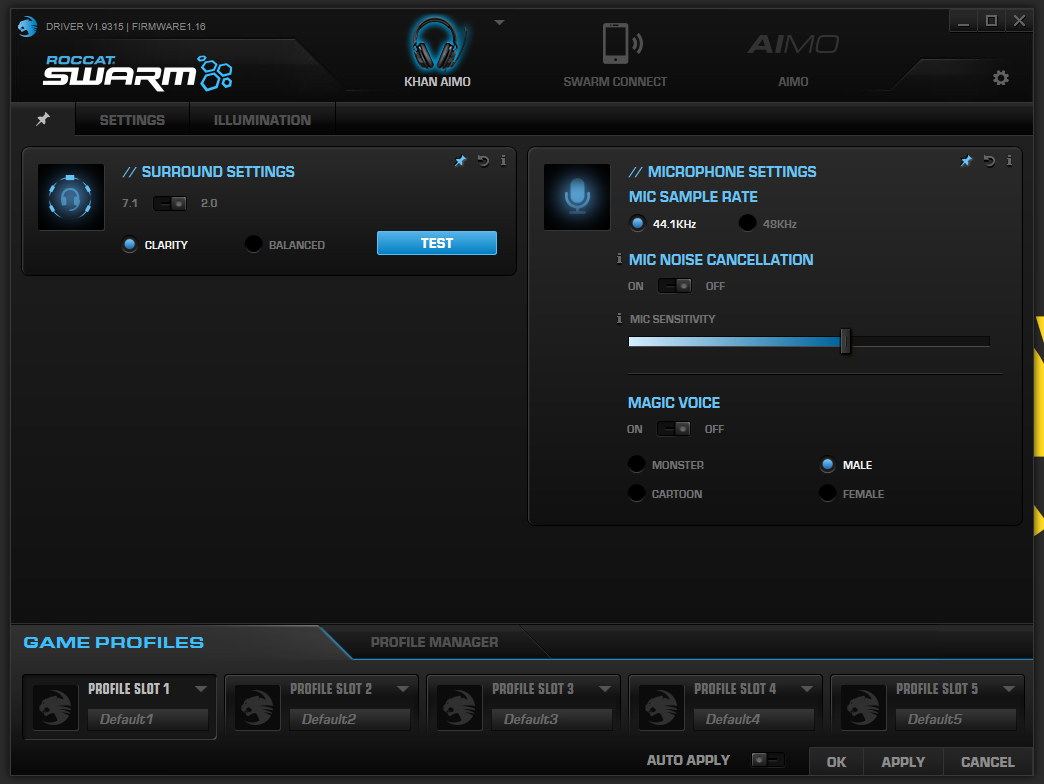 There are also a range of premade game profiles here, which allow you to rapidly switch between different settings. For example, the FPS setting might emphasise sounds like footsteps or distant gunfire, while the explosions setting boosts the bass for a more cinematic feel. There are ten presets in all, and you can add your own custom jobs as well.

Towards the bottom of the pane, we have the same settings we saw earlier in the pinned tab: a surround sound toggle, microphone settings and Magic Voice.

It’s also worth noting that each of these settings can be saved into a profile, then switched to at will. For example, you might have a highly tweaked profile for gaming, and then a more balanced profile for listening to movies, music and other content. 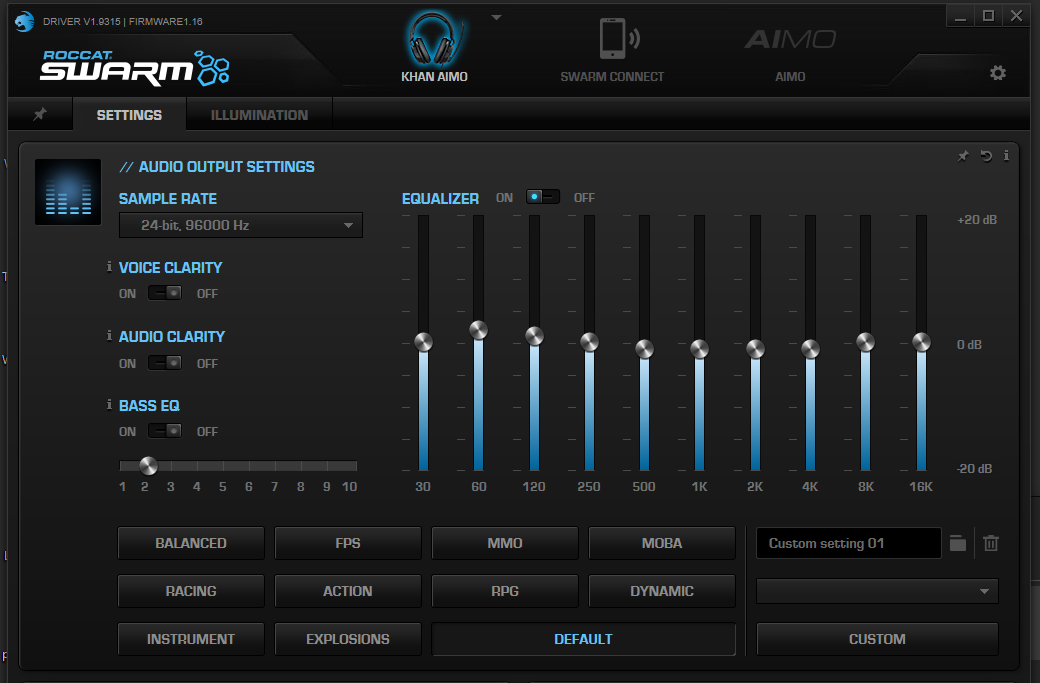 The final tab is illumination. Here you can choose between the Aimo ‘intelligent lighting system’, which syncs with other Aimo peripherals, cycle through colours, or choose a specific shade that remains constant or pulses in and out to resemble breathing or a heartbeat. For most effects, you can choose the speed of the animation and the brightness of the LEDs.

Of course, you won’t be able to see these lights while you’re actually wearing the headset, but hopefully you can provide a good light show for the crowds of spectators no doubt clustered around your screen. 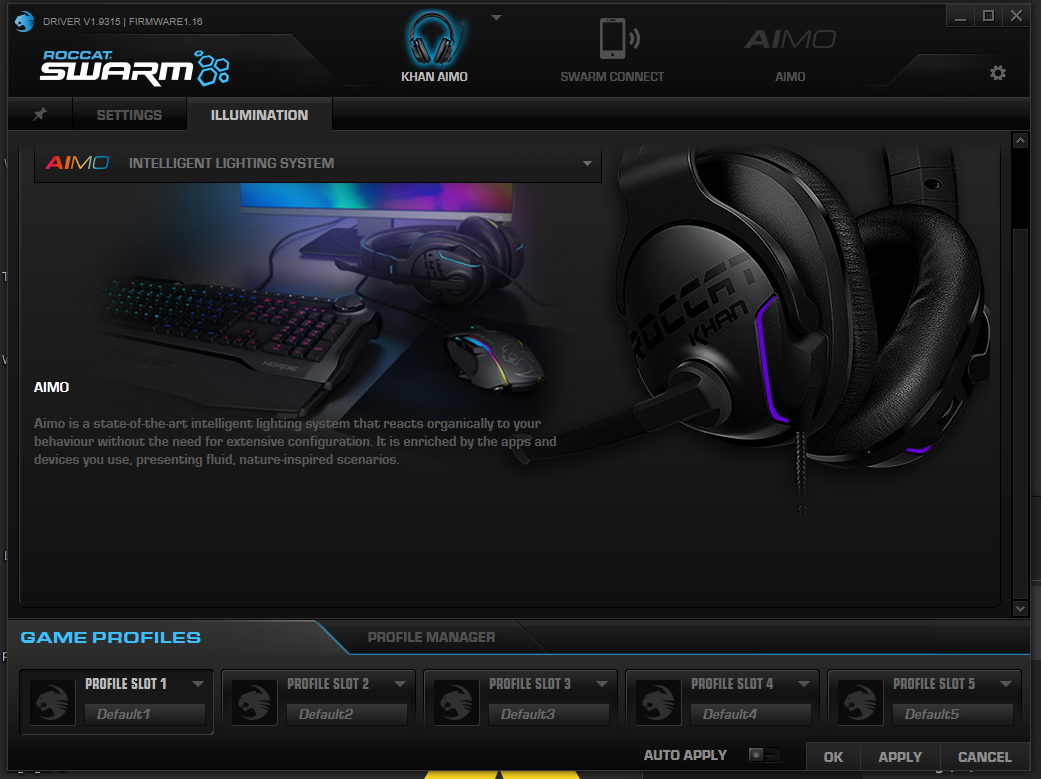 Roccat’s Swarm software is a little complicated initially, but it does come with all of the major features and settings you could want. You also have the ability to change settings for mice, keyboards and headsets in a single location, which is what we’d expect from a modern peripheral maker.

We used the Khan Aimo for a one week period with the XSR test rig, testing its performance with games, movies, television and music. Here are our first-hand impressions. 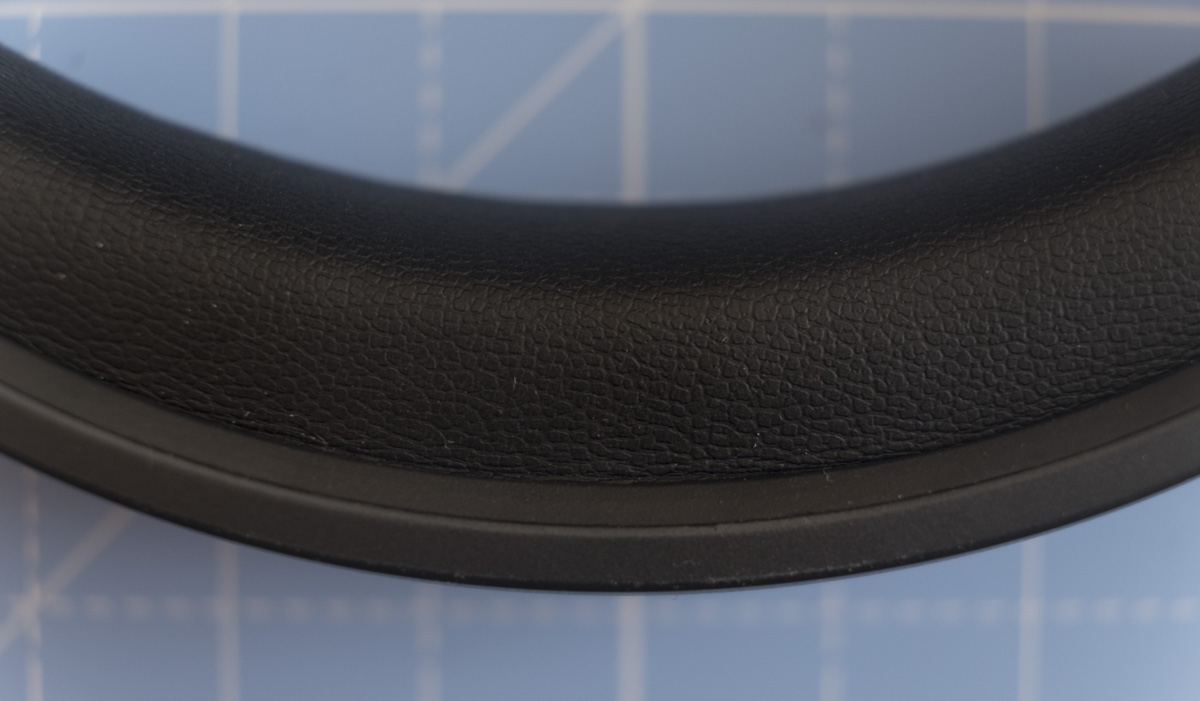 Despite weighing about 40 grams more than its older brother, the Khan Aimo remains a comfortable headset to use. The memory foam used in the cups and headband is soft, and the headset feels well-balanced as well. That ensures the Khan Aimo can be used for long stretches without discomfort, even while wearing spectacles.

You wouldn’t expect amazing audio quality out of a gaming headset, but the Khan Pro does better than most. While its sound stage is relatively narrow, it does reproduce mids with warmth and richness. Meanwhile, highs are a bit timorous but can be found, and bass tones are a little flat even with the ‘bass equaliser’ setting engaged. 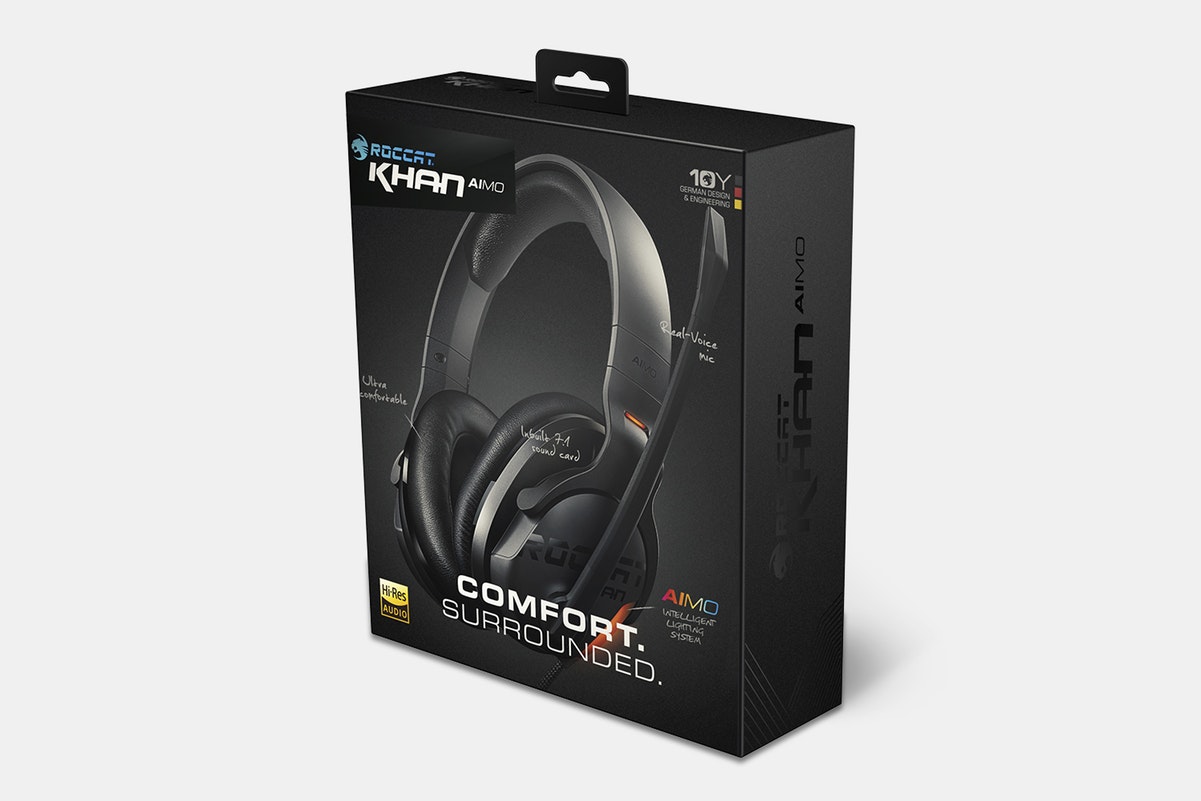 The Khan Aimo supports high resolution audio, which means that you should be able to hear additional detail in high-quality recordings. Sony have a nice page which provides music in regular and high-resolution formats, which in theory should allow you to grasp the advantage that high-res audio provides.

In practice, I found it difficult to tell the difference between the two recordings when listening on the Khan Aimo, even though the FLAC file was literally ten times the size of the less detailed M4A alternative. I’d be curious to hear whether other Khan Aimo owners can tell the difference; is it the headphones or is it my ears? 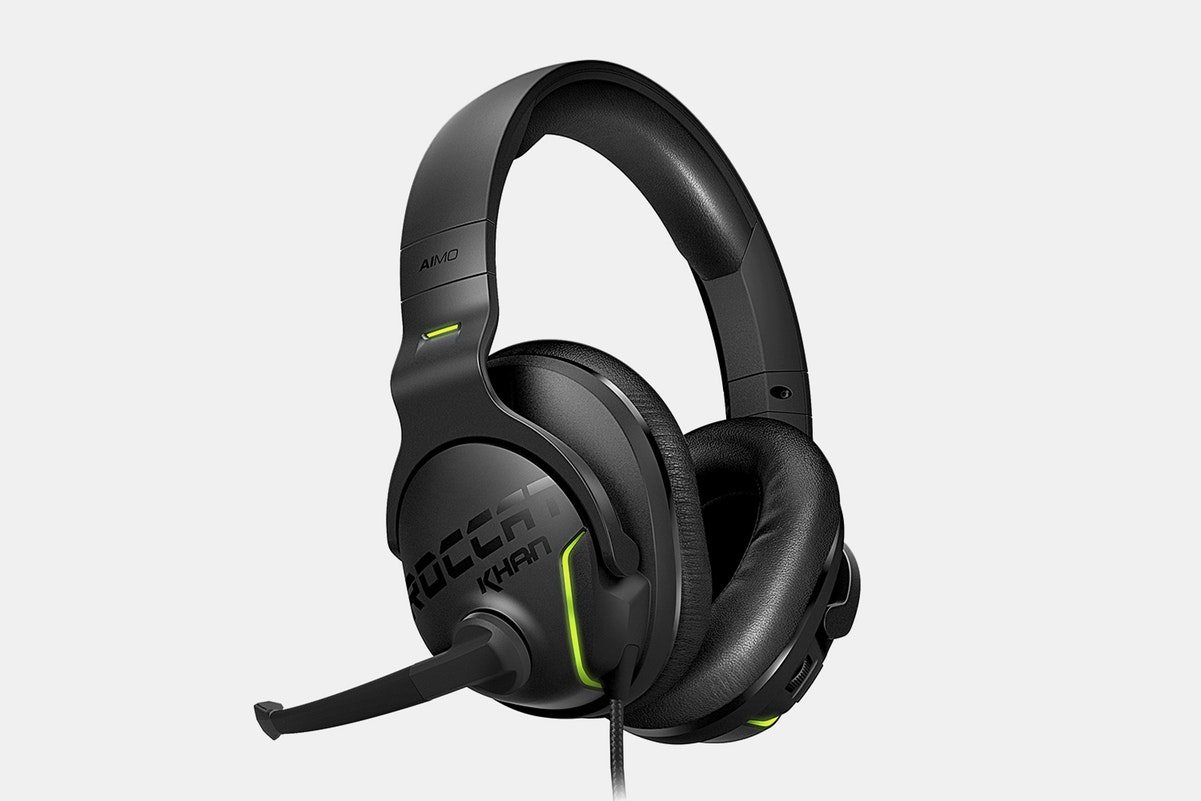 While the headset boasts of its 7.1 surround sound mode, I didn’t find it useful for locating enemies in Counter-Strike or PlayerUnknown’s Battlegrounds. Instead, the native 2.0 mode provided better results, allowing me to more easily judge the positions enemies by their footsteps. However, it was nice to be able to rapidly toggle between these modes just to make sure that 2.0 was indeed the better option. In more cinematic, single-player experiences, I did enable the simulated surround sound mode and enjoyed the seemingly extra bombast provided.

For listening to music, I’d certainly recommend a different headset. However, the audio quality was more than enough for games, watching TV and even some movies — the surround sound option works great here too.

The Khan Aimo’s product page also boasts of its passive noise cancellation abilities, and these were actually quite reasonable. The headset completely covers your ears when worn, which allows you to block out distant sounds and concentrate more easily on gaming — perhaps to your peril, if you ignore your significant other! 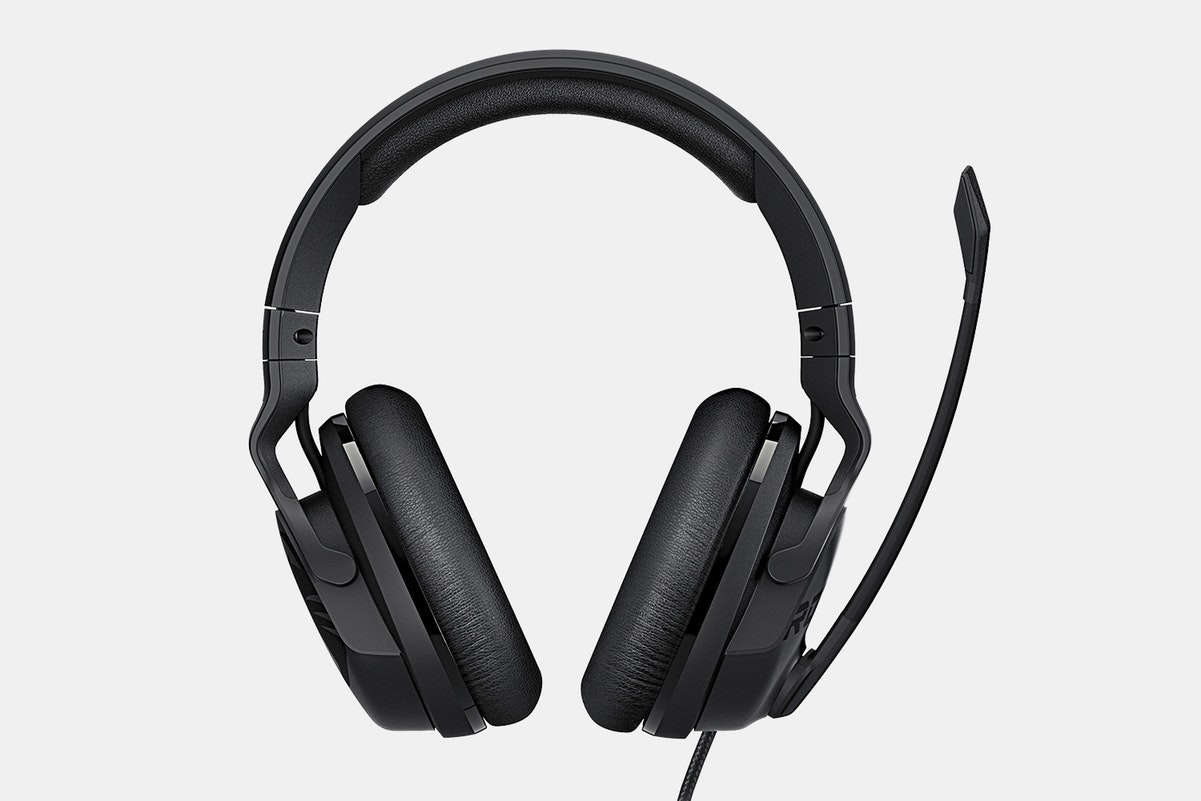 The Khan Aimo seems to sport precisely the same microphone as the Khan Pro, and offers similarly faultless levels of performance. It’s not quite on the level of a dedicated USB microphone like the Blue Yeti, but it’s still more than sufficient for complaining to your teammates that someone has killed you from behind and weren’t they supposed to be watching that angle?

Flipping up the microphone to mute was also handy, particularly in situations where you don’t want your Discord buddies to hear what you’re saying to your wife (“Yeah, don’t worry, it’s not an important game, I’ll just run in and die!”) 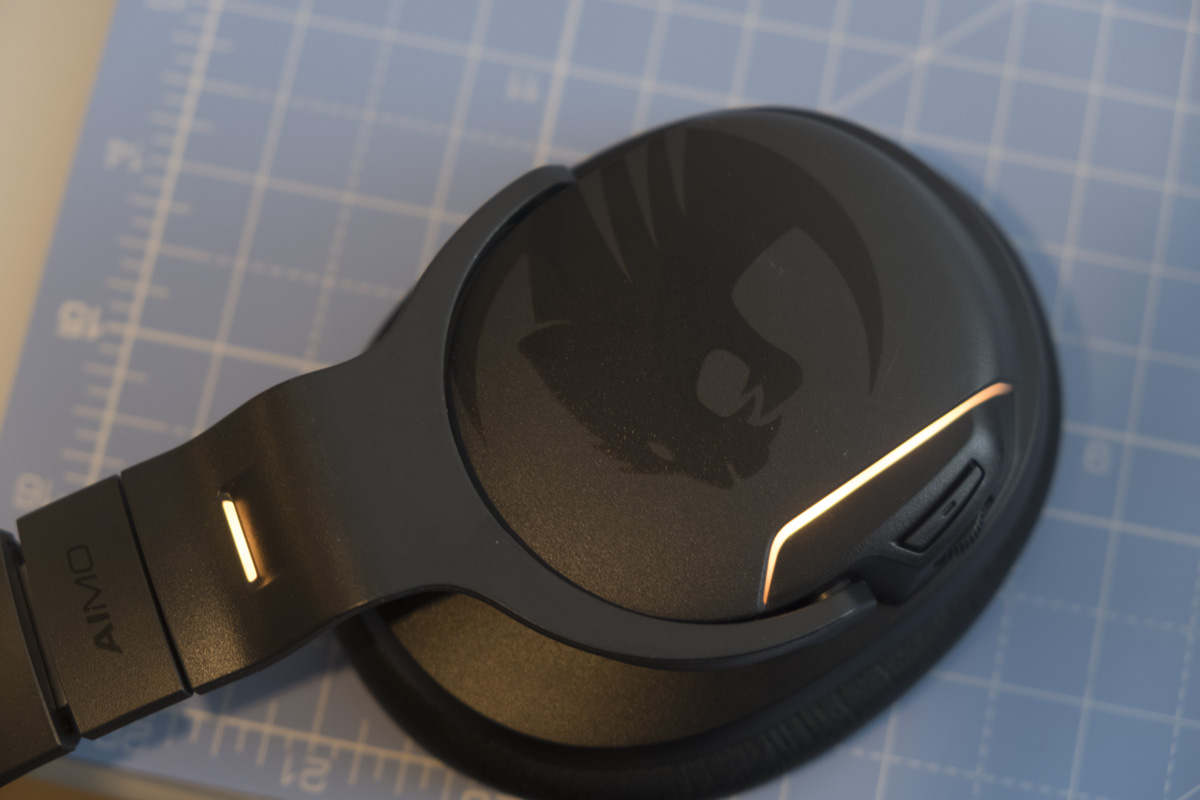 The inclusion of a volume dial on the right earcup is fantastic — it’s always nice to be able to adjust your volume on the fly, without needing to dive out a game to find the Windows volume controls. The surround sound toggle is quite close by, but it’s difficult to toggle accidentally and I didn’t experience any issues there.

The software experience was also quite reasonable, with the Swarm app providing all of the functionality I needed (and some fun stuff that I didn’t, such as the ability to pitch-shift my voice to annoy teammates in Counter-Strike). 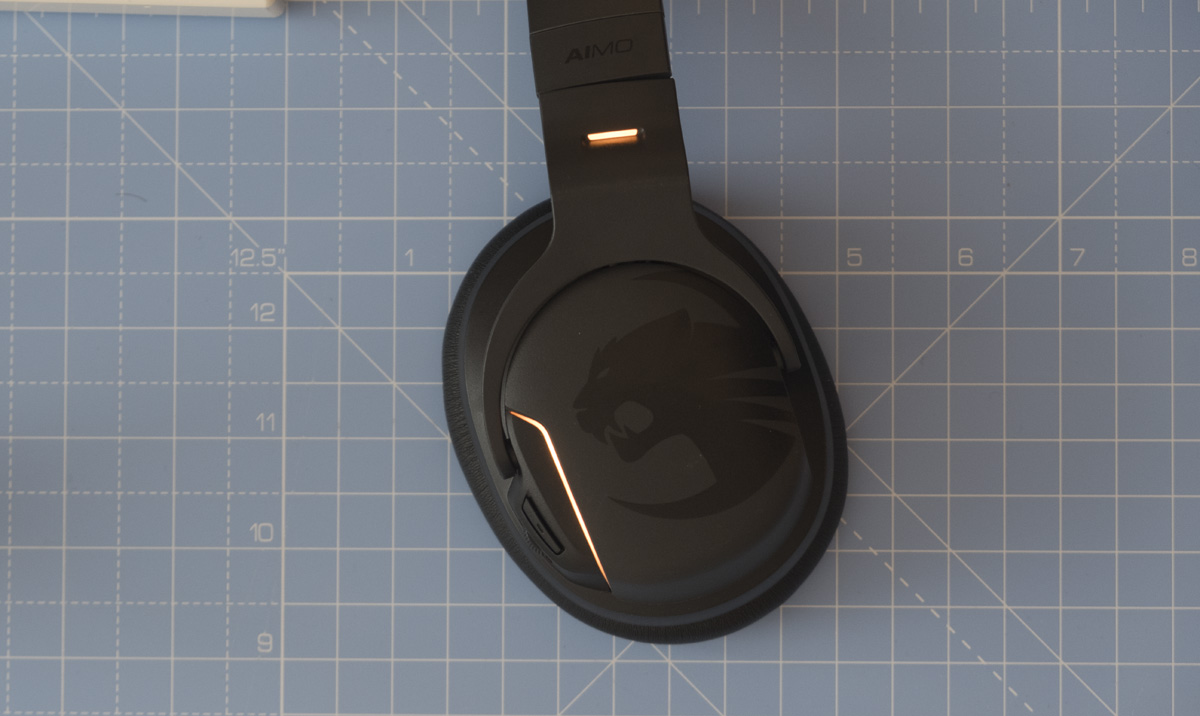 However, the RGB illumination preset that gives this headset its name could be improved. After using three devices that support it, Aimo remains as impenetrable as ever — I’d love to be able to find feedback on what is going on, to see how the system works and what it is affected by. I mean, listen to this inscrutable description in the Swarm app:

Aimo is a state of the art intelligent lightning system that reacts organically to your behaviour without the need for extensive configuration. It is enriched by the apps and devices you use, present fluid, nature-inspired scenarios.

I mean, really? Why can’t I see a list of what is currently affecting the lighting and could affect the lighting? If I know that a certain game or hardware component could influence the lighting, I’d be intrigued to try it — as it stands, Aimo feels like a simple colour cycle effect synchronised between Roccat peripherals; the only addition is the flowery prose. Is that really enough to justify a whole product range?

The Khan Aimo is a solid piece of kit, a comfortable headset that boasts an excellent microphone, comprehensive software options and a fun (if not entirely practical) 7.1 simulated surround sound mode.

While the high resolution audio support is arguably a non-factor for gaming and the Aimo lighting mode remains as ill-defined as ever, the headset still justifies its small £15 RRP premium over the Khan Pro. It’s certainly worth considering at the £100 mark, particularly if you’ve already entered Roccat’s Aimo-enabled peripheral ecosystem.

Other headphones at this price range to consider include the HyperX Cloud II and Cloud Alpha, Corsair Void Pro RGB, and my own choice, the open-back Sennheiser HD 598 SE / SR.

The HyperX Cloud II boasts excellent comfort and good quality audio, the Void Pro has a meaty sound with pretty RGB lighting and wireless capabilities, and the HD 598 SE has a beautifully wide sound stage and is super comfortable to wear. All are great options.

What do you think? Let us know in the comments below! 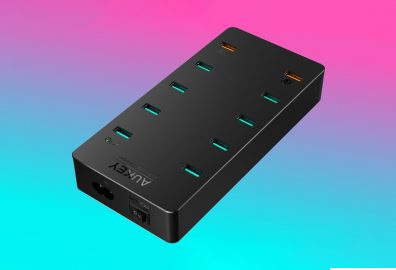 Are you tired of plugging and unplugging cables in the never-ending effort to keep all of your USB devices... 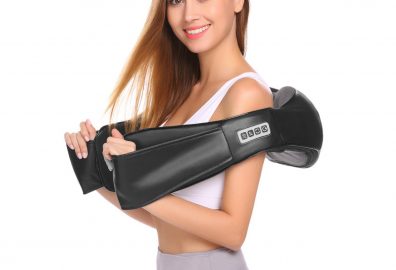 And now, for something completely different. It’s not a monitor, mouse or keyboard, it’s… a...