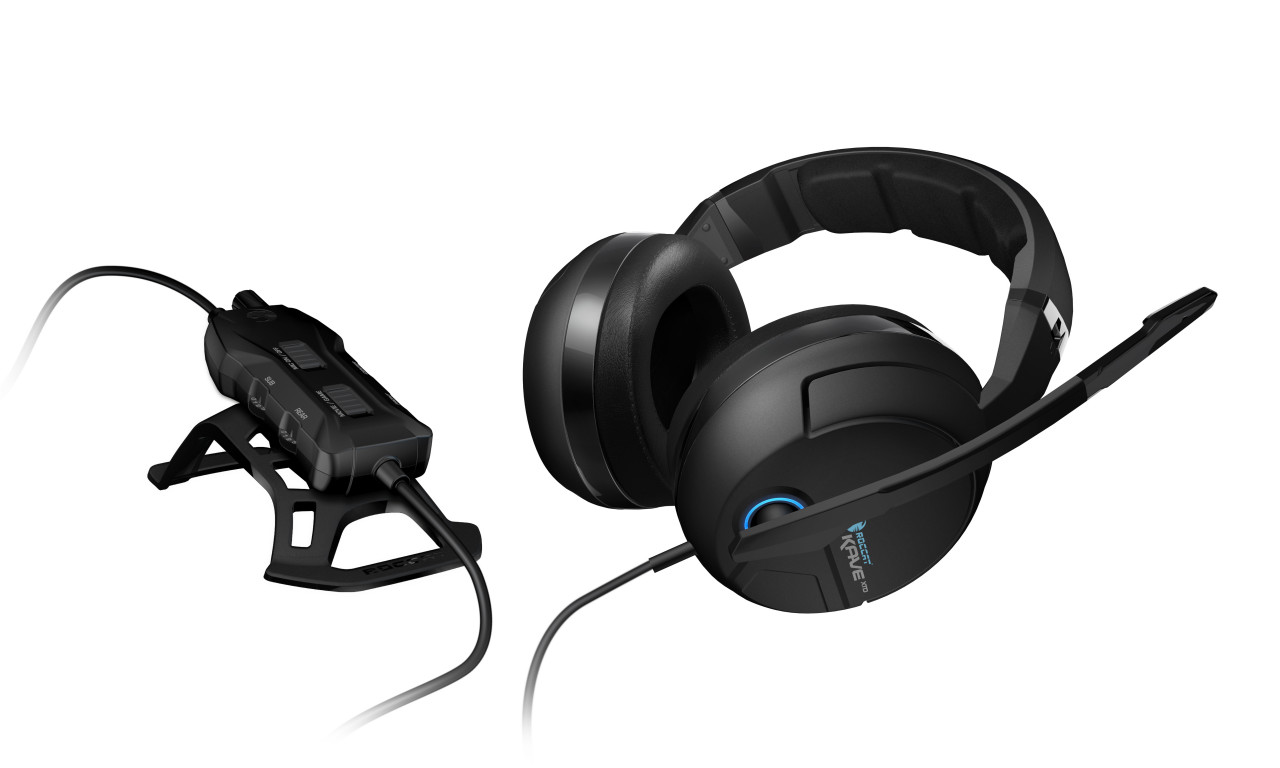 Today we’re taking a look at the Roccat Kave XTD 5.1 Analog. As you might have guessed from the long-ass name, this headset offers 5.1 surround sound and an analogue connection to your PC. Roccat are promising a headset that is comfortable, convenient and sounds great for less than £100, so let’s see how the Kave XTD 5.1 Analog performs.

The Kave comes in a nice almost-recangular box, showing the headset and its remote through a plastic window. The set’s features are elucidated on the box. 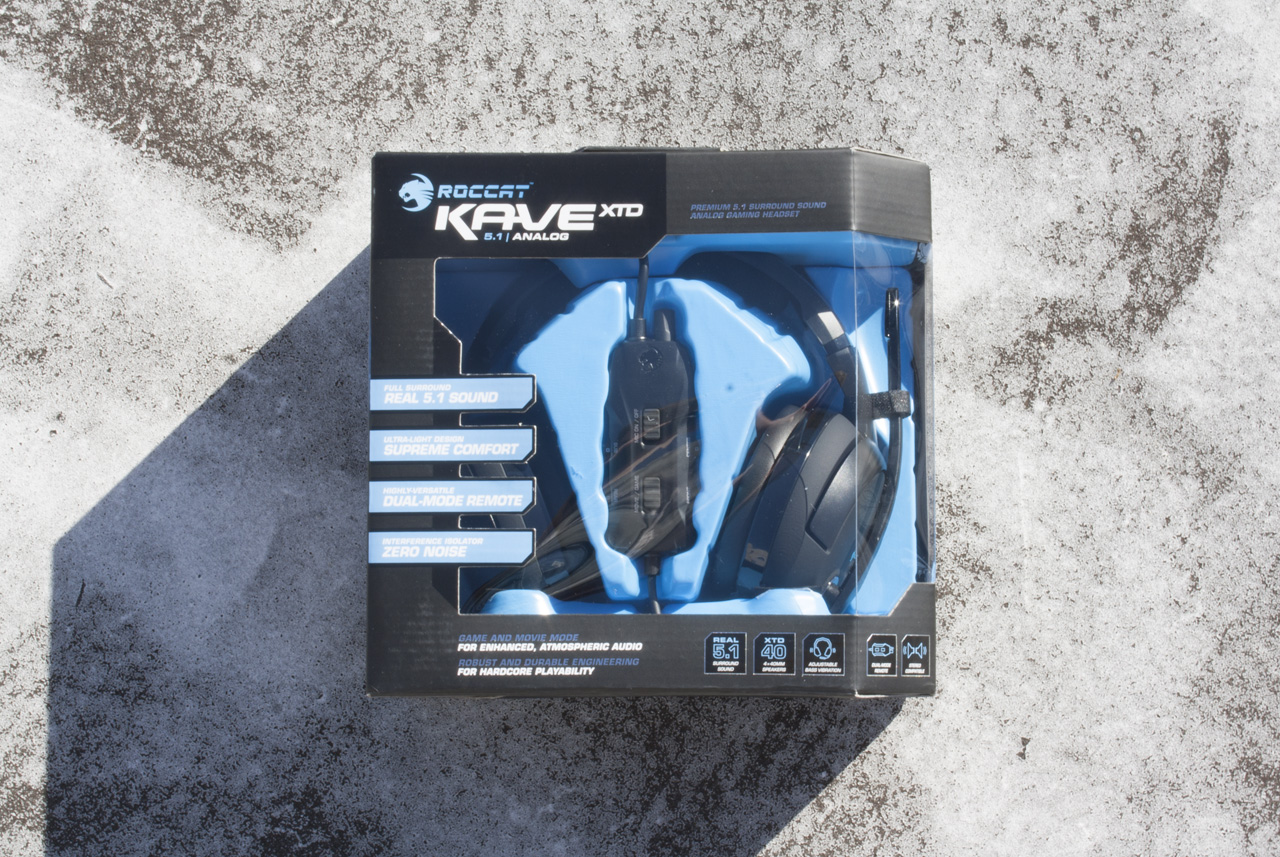 More detail is provided on the rear. Inside, you’ll find… not much, just a quick start guide wrapped in plastic, and the unit itself. 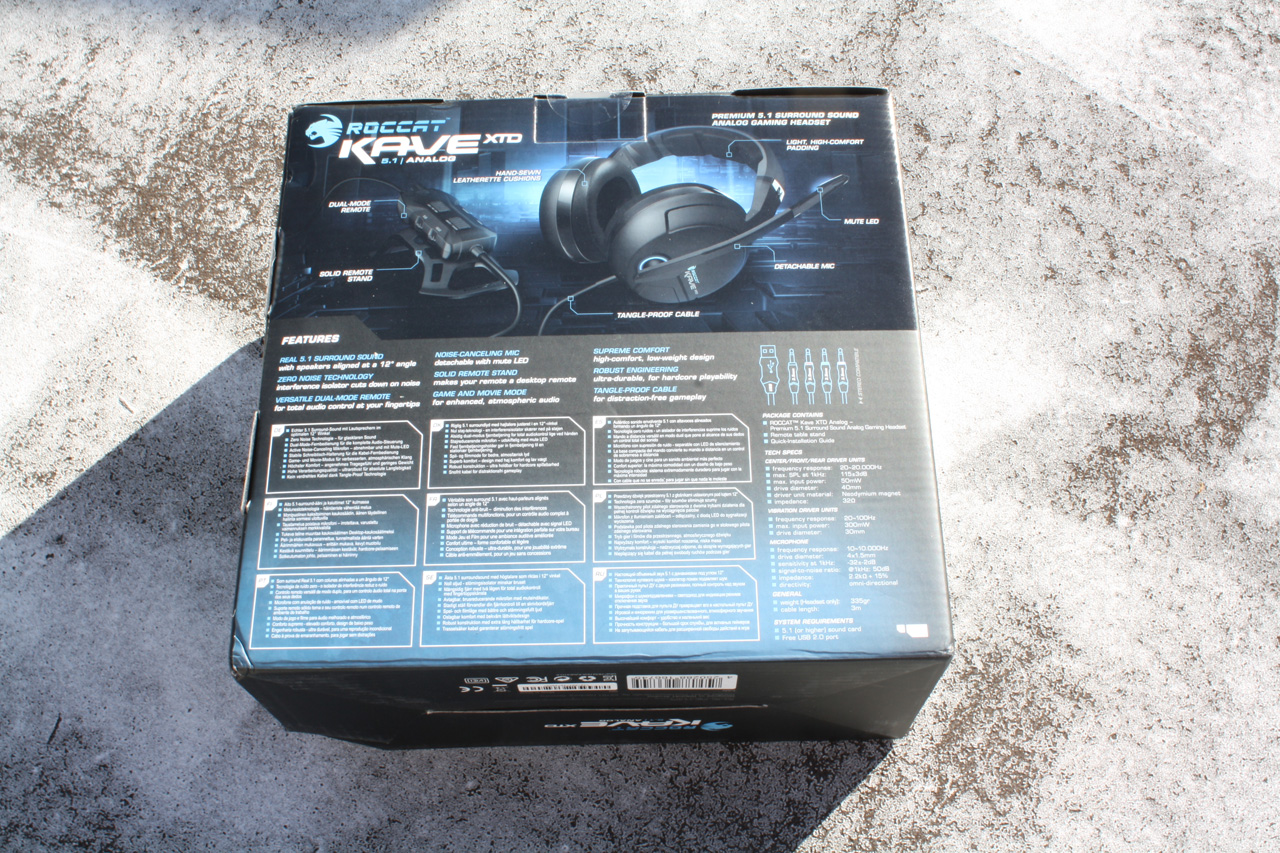 Let’s move onto the design of this headset to get a better idea of what we’re dealing with. 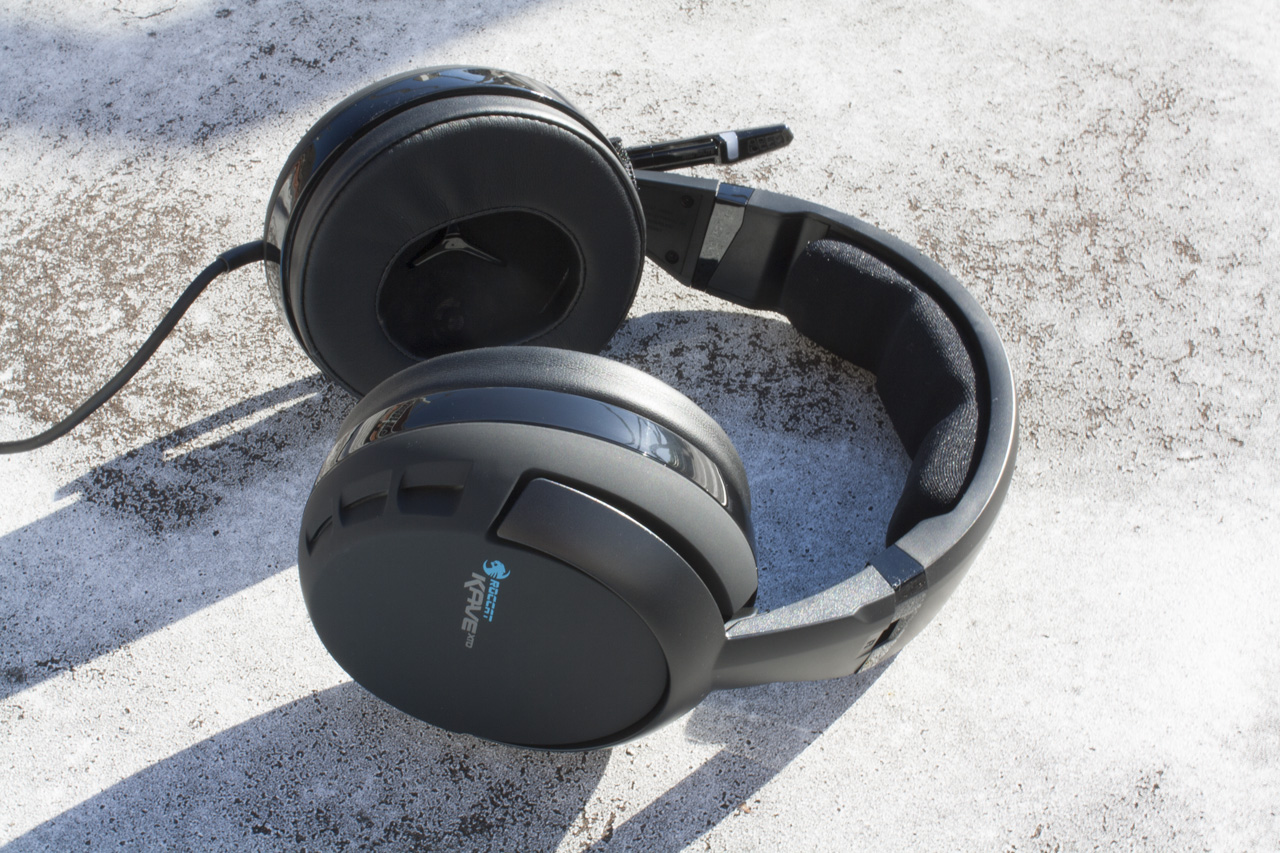 The Kave is an attractive headset, with large circular cups, a relatively thick headband stuck with segmented foam and black plastic used throughout. It makes sense to see relatively large cans here, as we’re fitting multiple drivers to allow for true 5.1 sound. 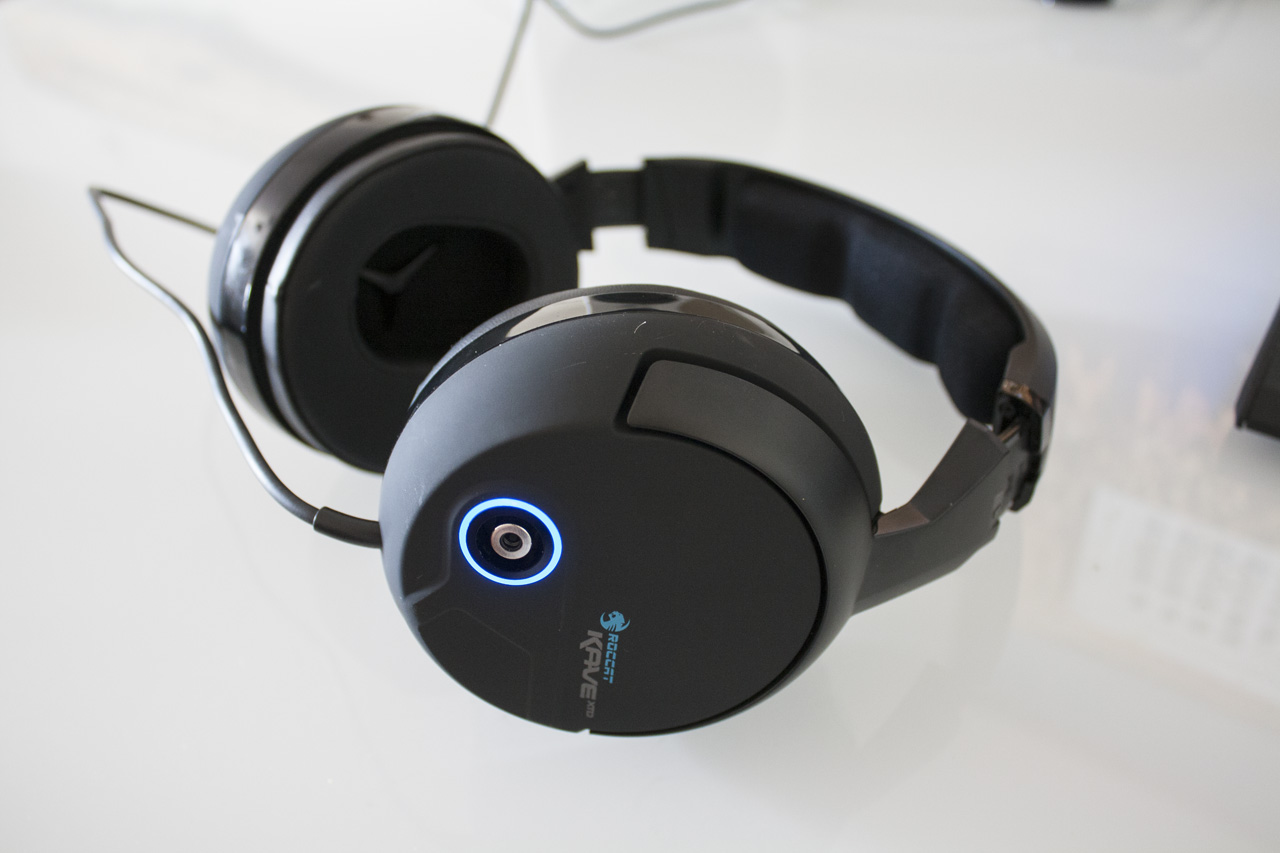 The foam used on the cups is of a good size and thickness, and hopefully should prove comfortable even for long-term use. 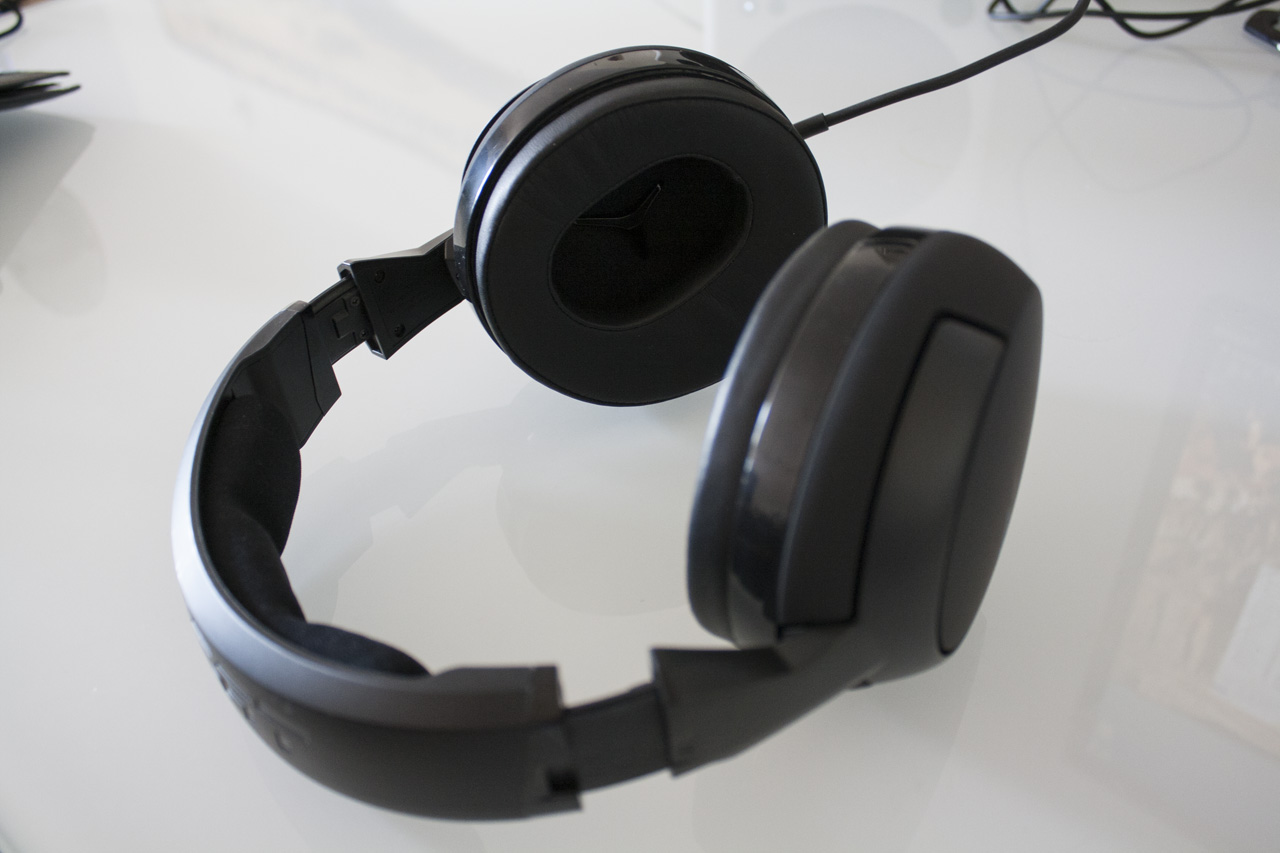 The left and right sides of the headset are clearly marked, and there are even indicators to show how much you have increased extended the headband by. This makes it a lot easier to recall a comfortable fit, particularly if you are sharing the headset with a person who has a different-sized head. 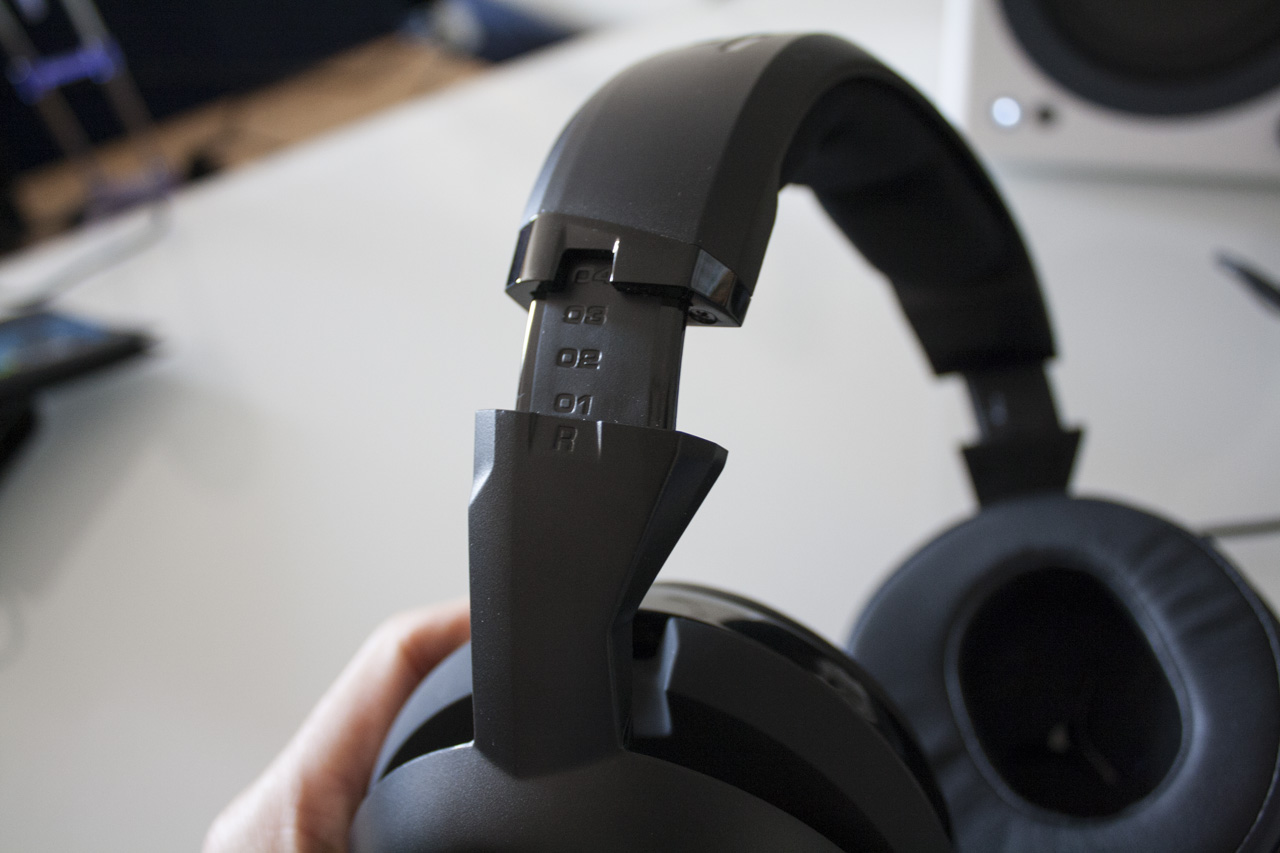 The microphone is a fairly long plastic unit, with some LEDs built into the boom to let you know when your microphone is muted. The microphone can be removed (or replaced) easily, with a durable-feeling connector that should stand up to repeated use. There is a blue LED ring around the mic port, which stays lit even if the mic is removed. There are no other LEDs on the headset. 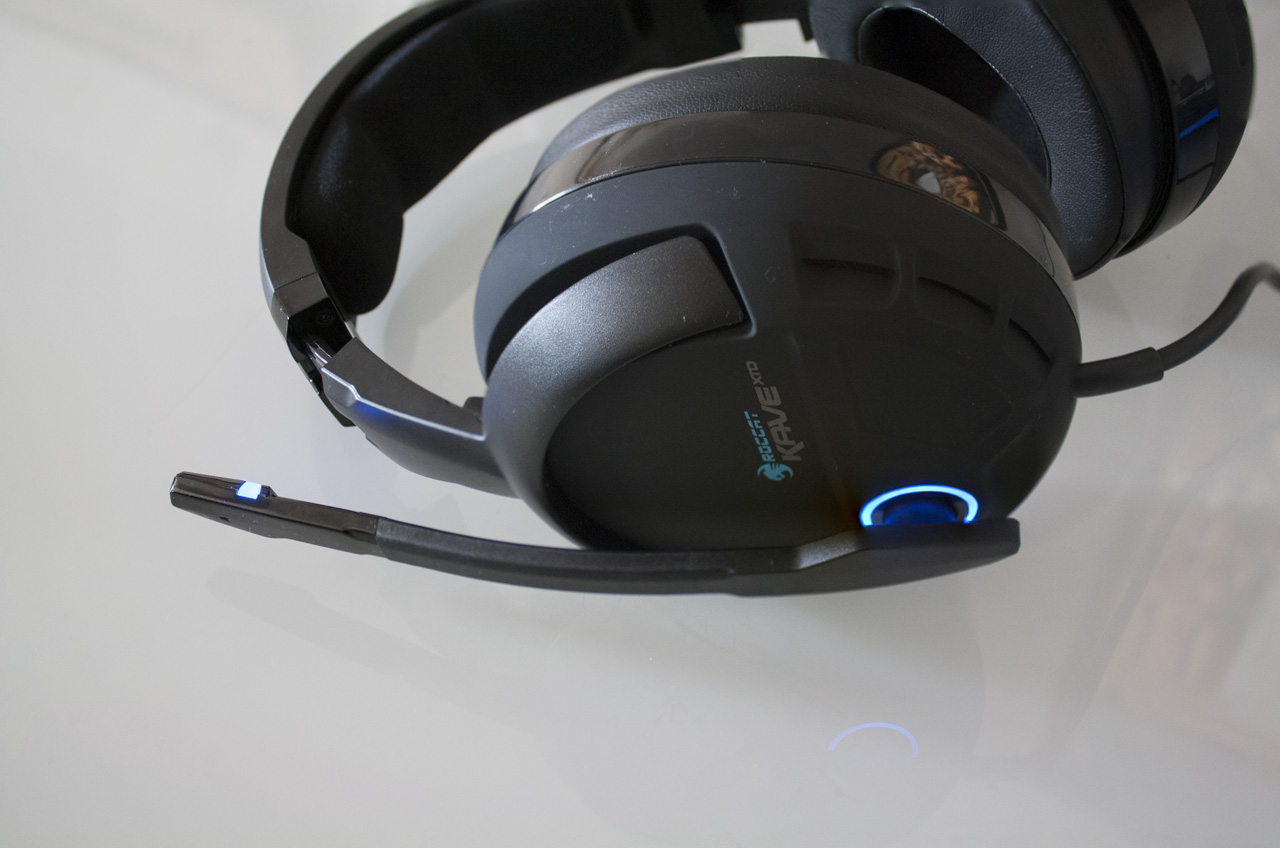 There are no controls on the headset itself, rather these are found on the in-line remote. This can be used either clipped onto your clothing, or clipped onto the desktop mount provided. 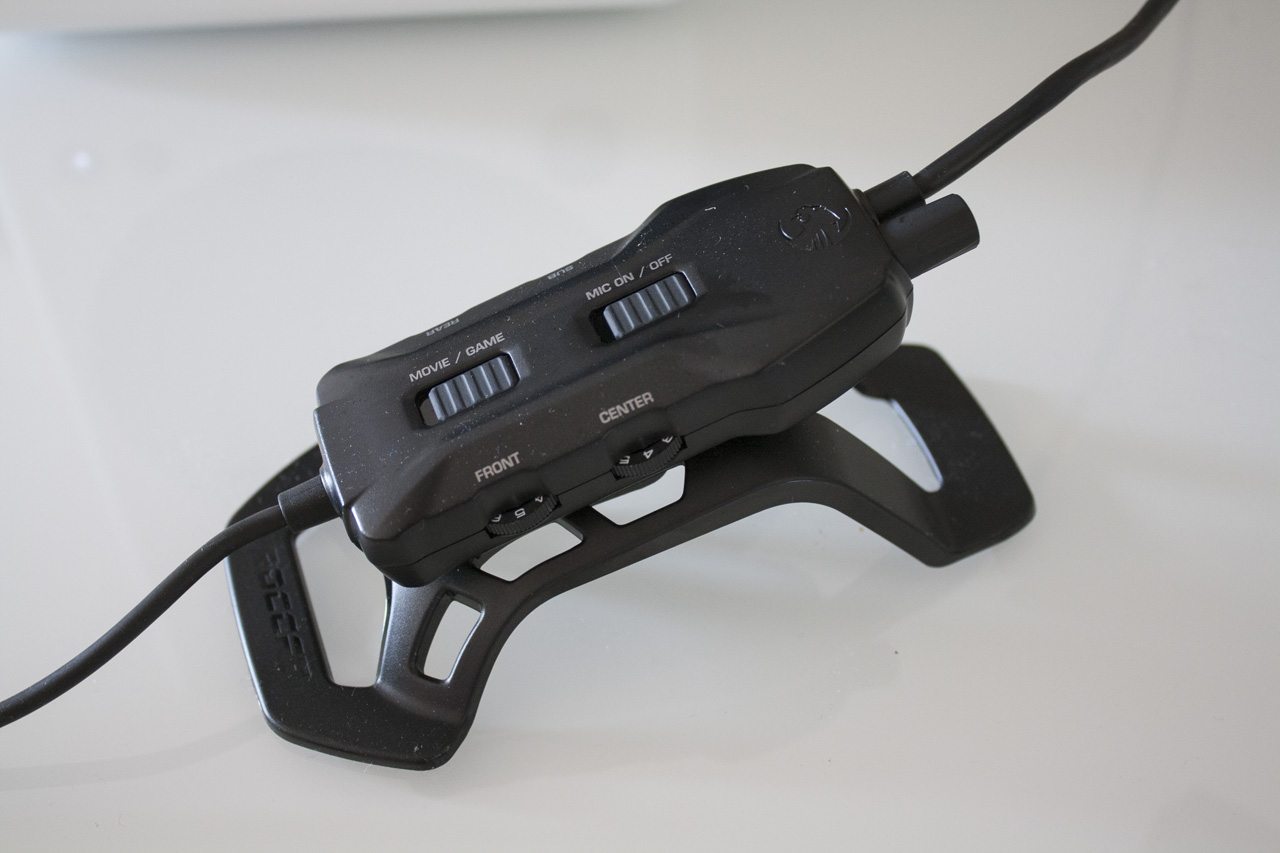 With the design examination complete, let’s move onto testing!

We used the Kave headphones for PC gaming, movies and music over a period of one week. That included games including Counter-Strike and Space Beast Terror Fright, where being able to hear the movements of your enemy is vital to continued survival.

It’s hard to say how much of a benefit 5.1 provides in terms of positional audio – I felt as though locating players in Counter-Strike was easier, but I’m not sure how much of that was a placebo effect. Given that pro players don’t tend to use 5.1 headsets, I reckon that the benefits are marginal at best.

The Kave remained comfortable even for long gaming sessions, which was a surprise for a 5.1 headset that packs in additional drivers. Still, it has been designed well, with comfortable pads on the headband and cups, and a significantly large size to fit even my elephantine ears.

One minor point against the Kave is that it’s not particularly easy to transport, compared to other headsets. There’s no bag to put it in, and when you next to plug or unplug there are five cables to work with. It’s understandable given that this is an analogue headset, but it’s something to keep in mind when you’re comparing the Analog and the (more expensive) Digital alternative.

A more serious issue is the microphone. This picked up a lot of whine from my PC, which left other players in-game complaining whenever I spoke. That meant I switched to a cheap USB webcam for my further matches, which didn’t pick up this noise. It’s disappointing that Roccat’s ‘zero noise technology’ didn’t fix this issue, but at least the microphone is removable so you’re not forced to keep a useless thing on your head. 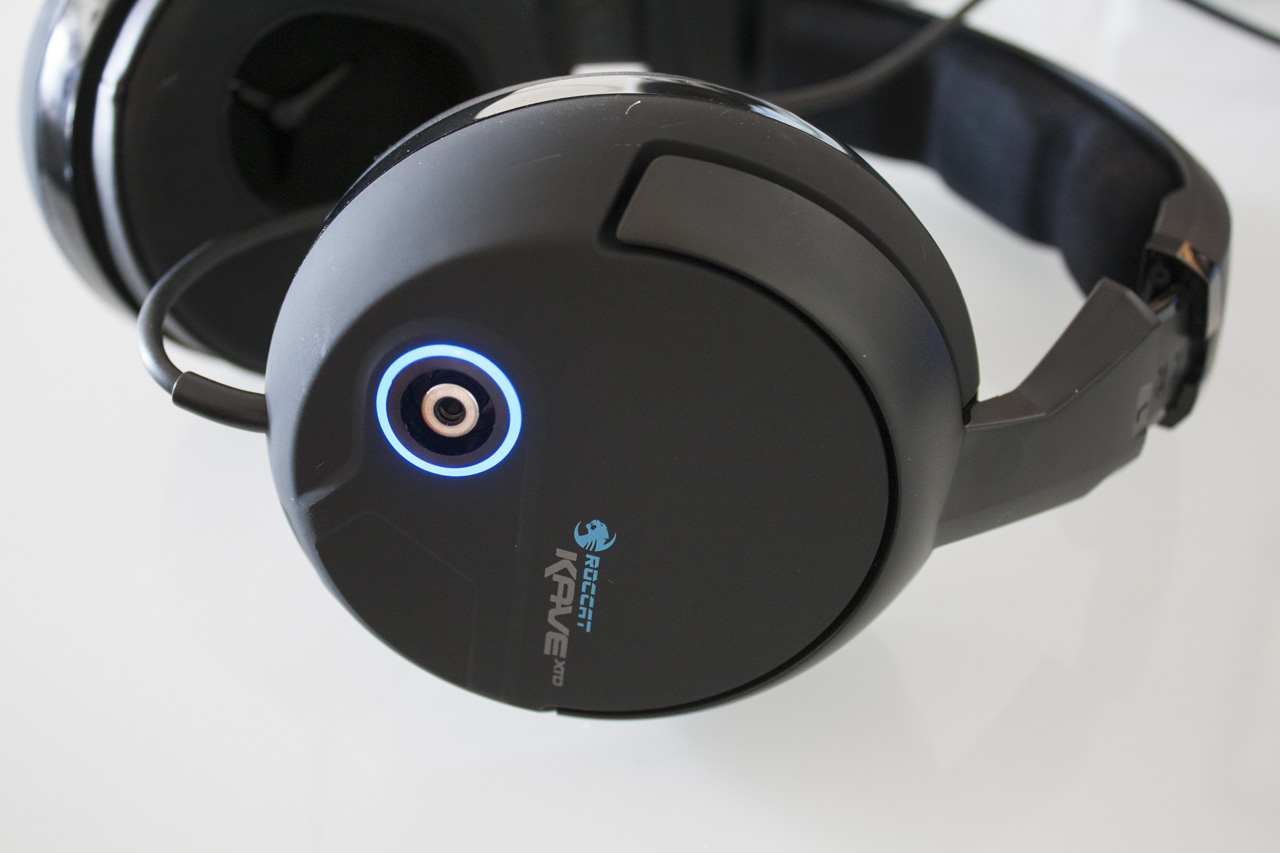 The Kave comes with a movie / game switch, so for listening to music and watching movies we set it to the ‘movie’ position. The Kave felt quite reasonable here, particularly with movies that supported 5.1 surround sound. The feeling wasn’t quite the same as being in a movie theatre or a high-end home cinema setup, but there was a definite feeling of immersion that made the headphones worth wearing. If you like to watch movies alone, then this is a great headset to ensure that you don’t wake the neighbors or disturb your roommates when watching late at night.

For music, the Kave was also quite solid. The Kave provided a great deal of volume, and remained distortion free at all the volumes I dared to test it. There was some bass here, if not a massive amount, and mids and highs were relatively clear too. This is certainly not a headset for audiophiles, given its slightly muddy sound, but it does the job.

When listening at high volume though, I became aware of a high-pitched whine. It wasn’t noticeable while music of almost any volume was playing, but it was a bit of a pain between songs or during quiet sections of song. I observed the same problem from my speakers, so I’ll attribute this to a poor sound card / PC setup… but I’m disappointed that Roccat’s vaunted ‘zero noise technology’ didn’t eliminate this interference.

The Kave 5.1 XTD is a mixed bag then. While it largely fulfills Roccat’s promise of audio excellence and comfort, it also displayed fairly muddy bass and didn’t eliminate a persistent background whine on my system. Still, its feature set and good built quality make it a strong contender at this sub-£100 price range.

Today we’re going to be looking at a high-end optical gaming mouse from Mionix, the Naos 7000. The Naos...