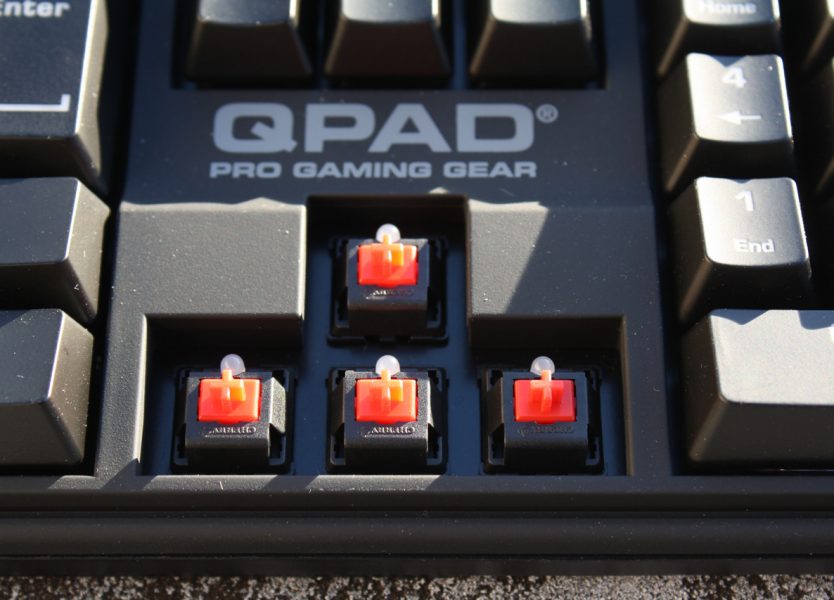 Today I’m taking a look at QPAD’s MK-70 mechanical gaming keyboard. The board promises the usual features – Cherry switches, NKRO, LED backlighting – but is there anything here that sets it apart from the wave of mechanical keyboards on the market? Let’s find out together. 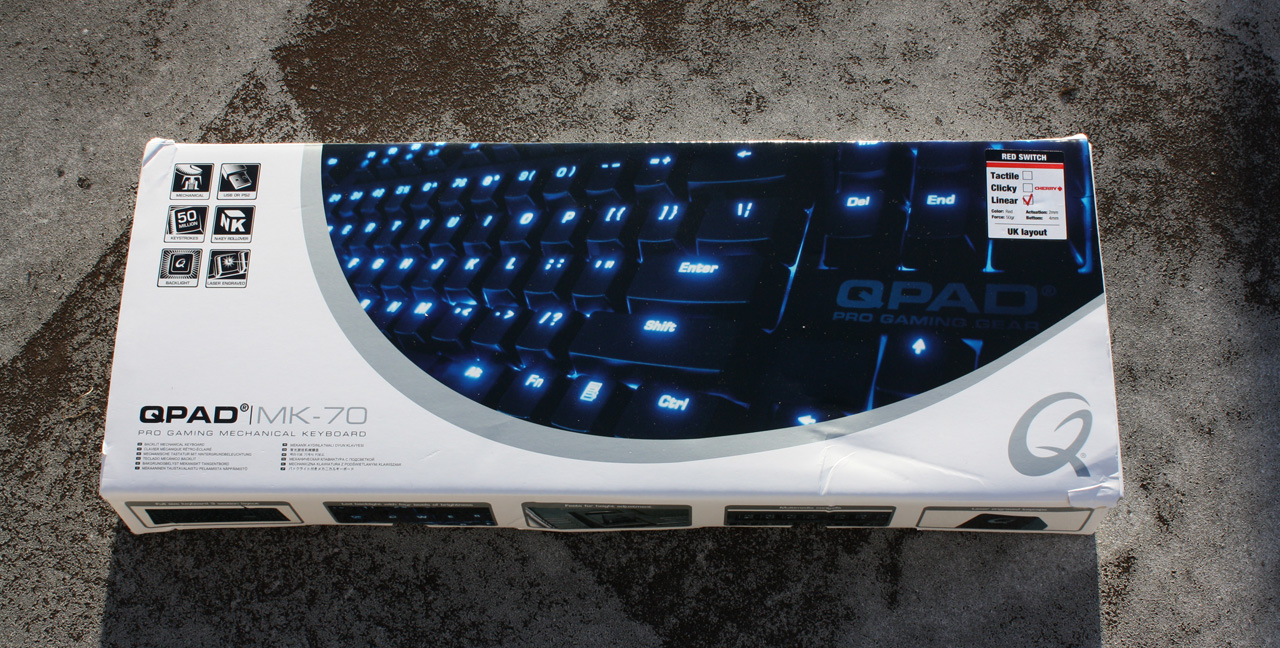 The MK-70 comes in a (for me, battered) white cardboard box. The MK-70 itself is displayed prominently on the front cover. 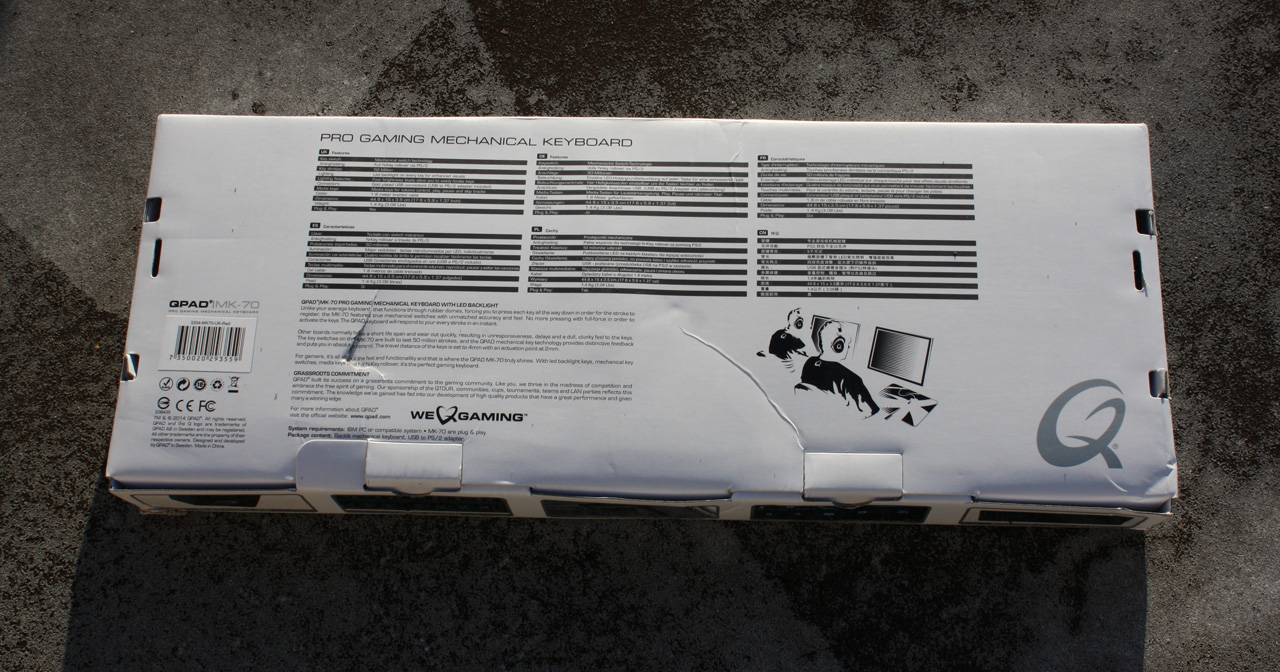 On the back, we have more substantive information. Inside, you’ll find the keyboard itself, well wrapped, with a USB to PS/2 adapter and the usual bits and pieces of literature. 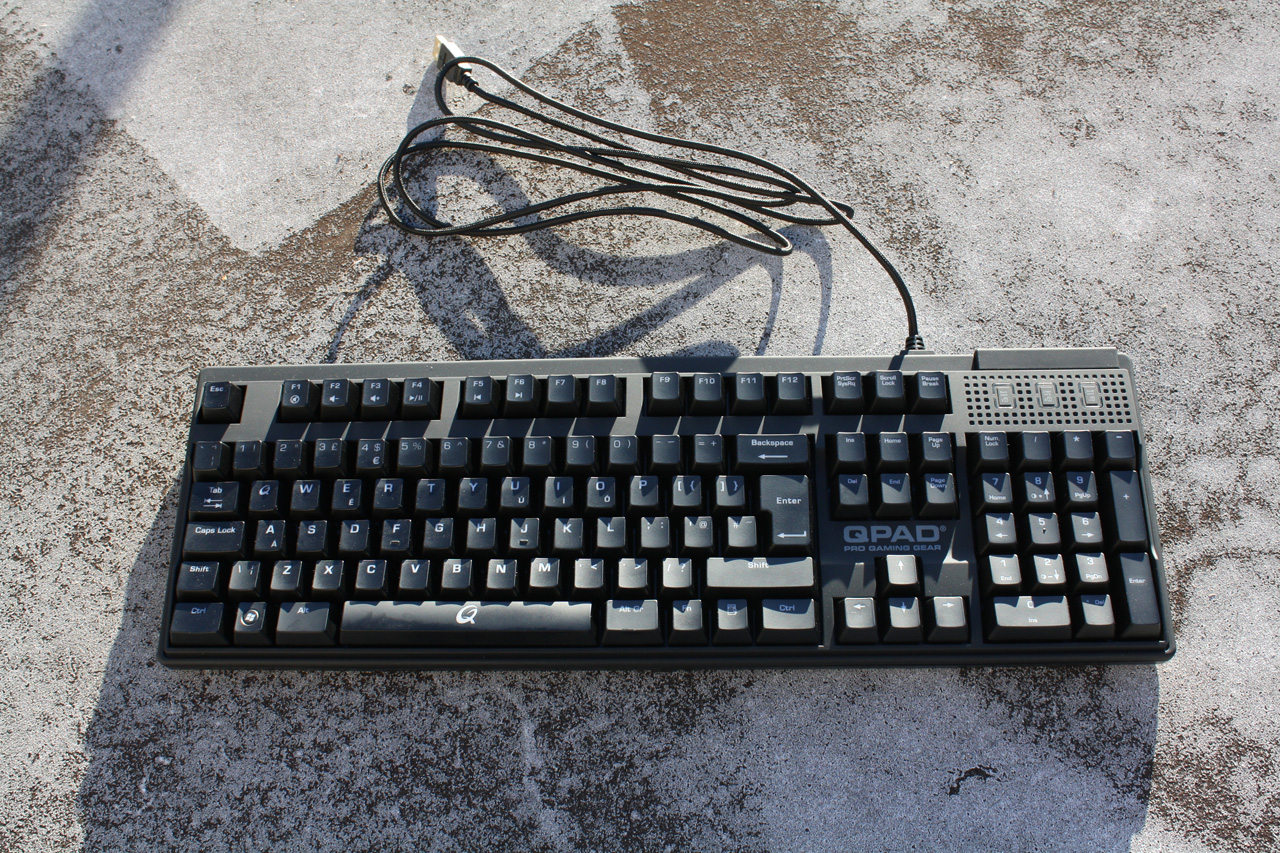 The QPAD MK-70 shares its design with a number of other keyboards: the Rosewill Apollo, Max Keyboard Nighthawk X8, Asus Echelon and iOne Xarmor are all nearly identical to the MK-70. The only differences seem to be in branding, which for the Qpad is represented with a few logos and some customised key legends. 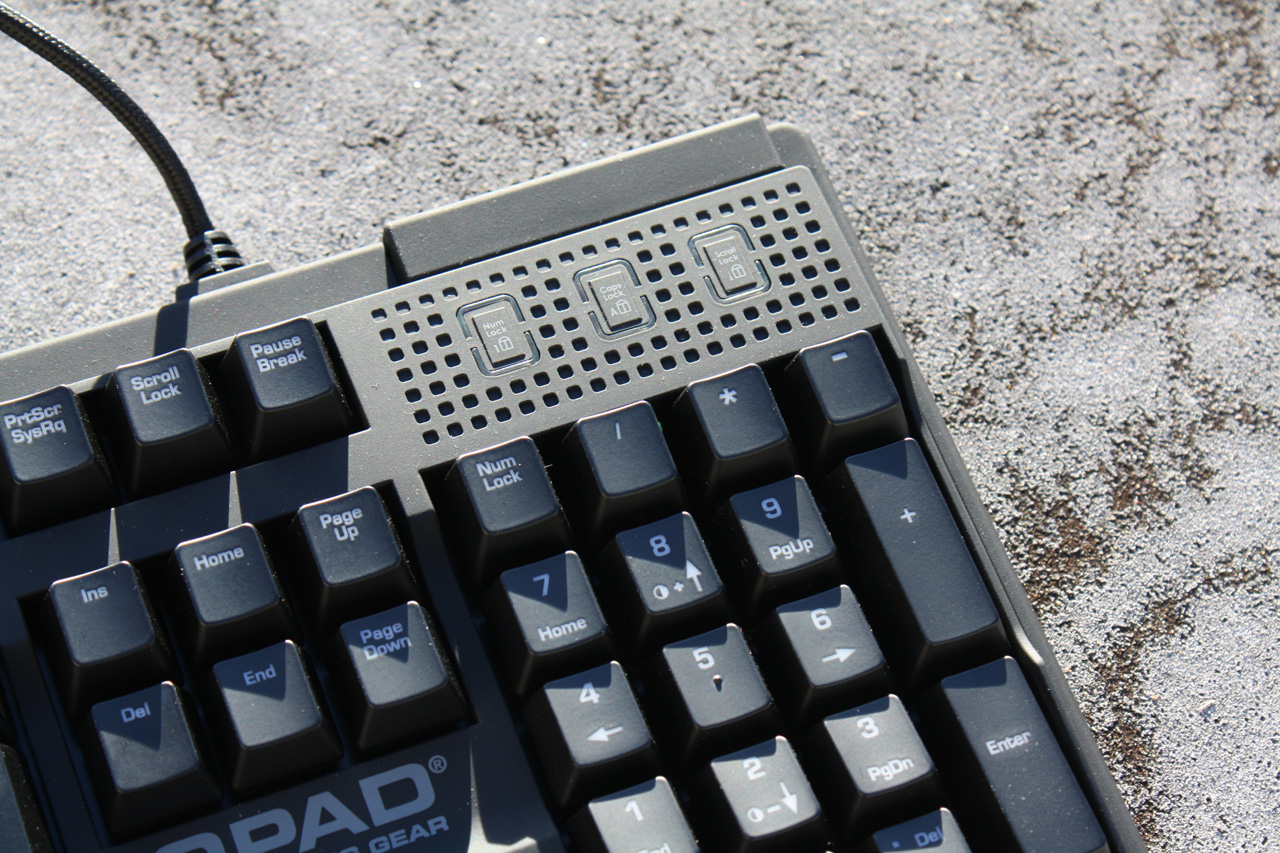 The back of the keyboard shows the keyboard’s lineage, with a set of punch-out holes in the plastic which could reveal USB and audio passthroughs, but on the MK-70 remain sealed.

One of the most important factors of a mechanical keyboard are its switches, and in this case we’re looking at Cherry MX Red switches. It’s nice to see genuine Cherry switches rather than Kailh clones, and the switches have a nice soft feel true to form. 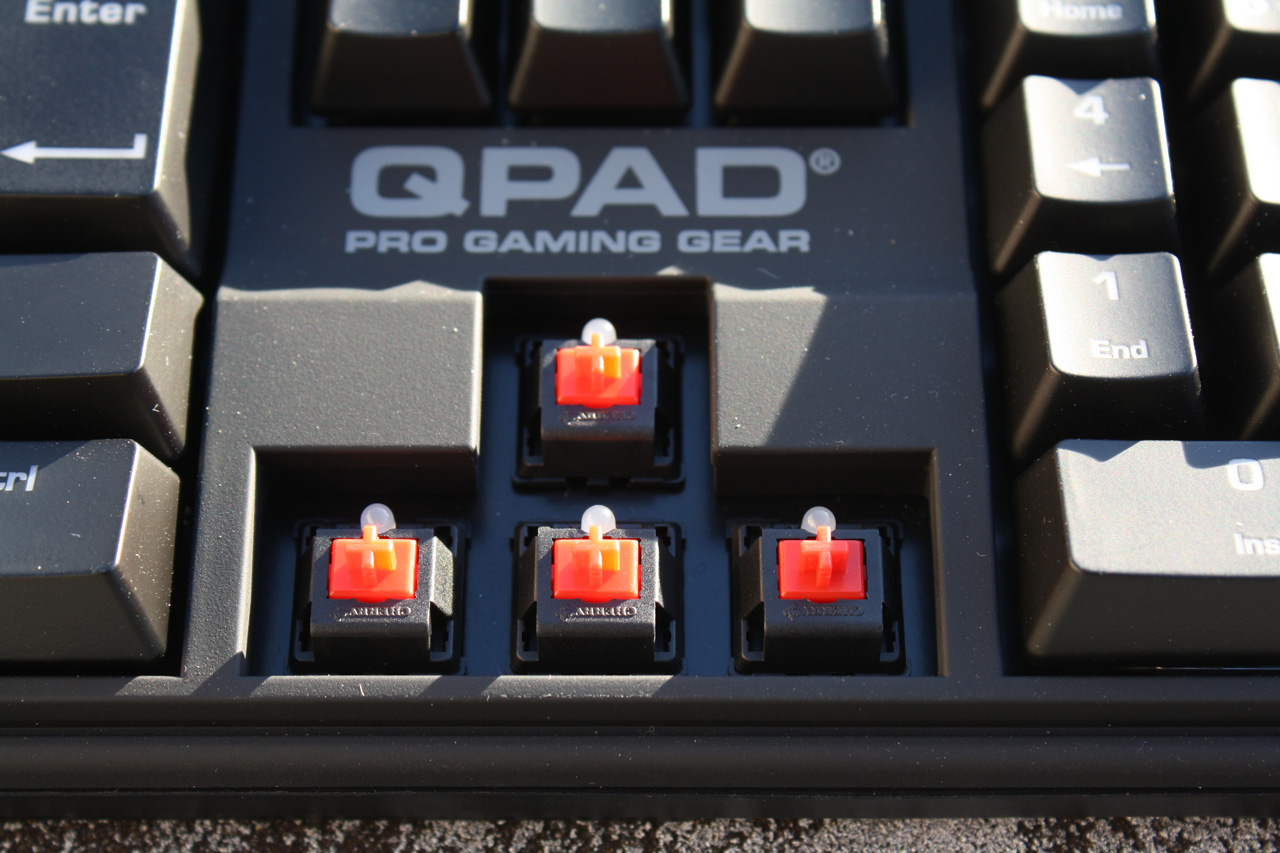 The keycaps are wrought of ABS plastic, and are rather thin. The keycaps have laser-engraved translucent legends, allowing the LED backlighting to shine through. The LEDs used here are a single colour – blue – but offer a steady and bright light ideal for night-time use. The LEDs can be adjusted in brightness or turned off entirely if you don’t need them. 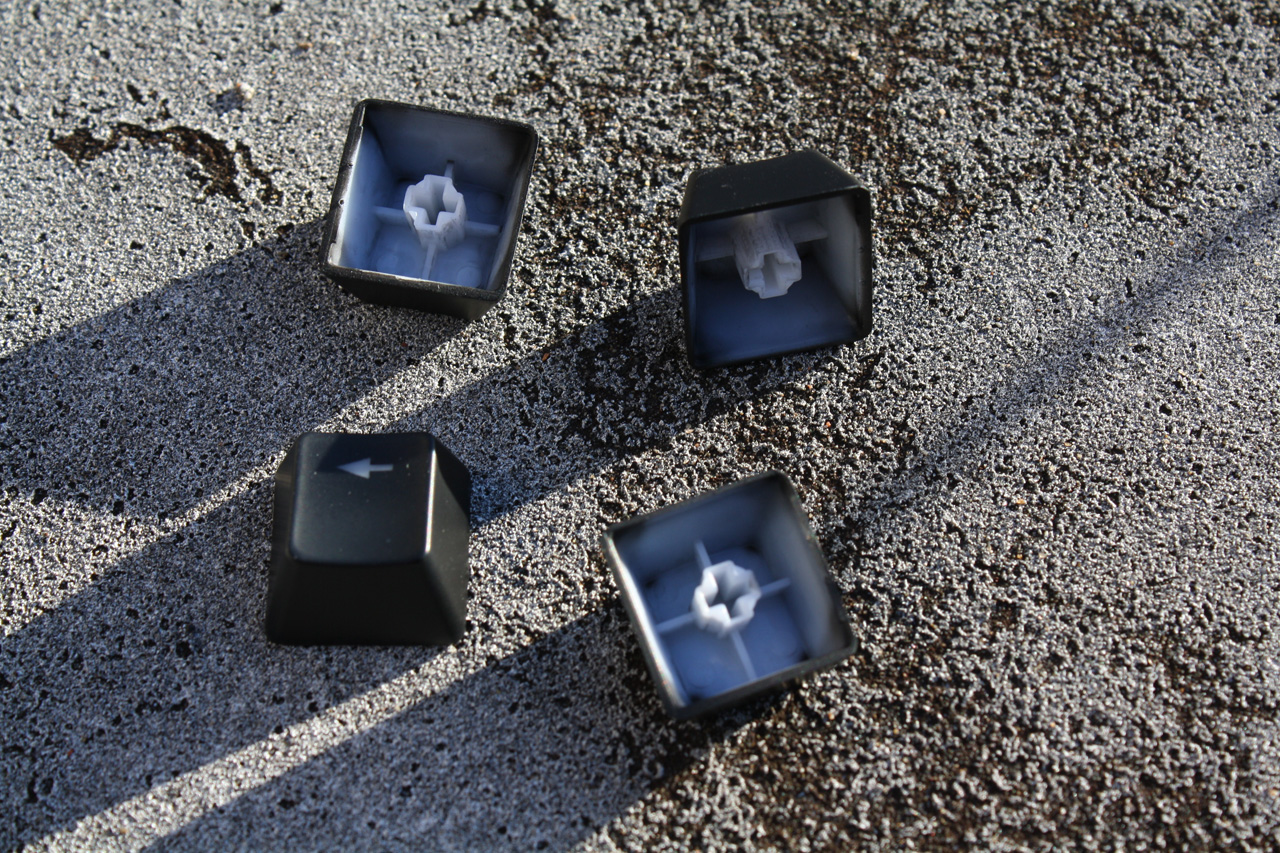 The layout is quite close to a standard full-size keyboard, with the only exception being a Function key amongst the lower right modifiers. The Function layer includes the brightness controls, volume control and media playback keys. 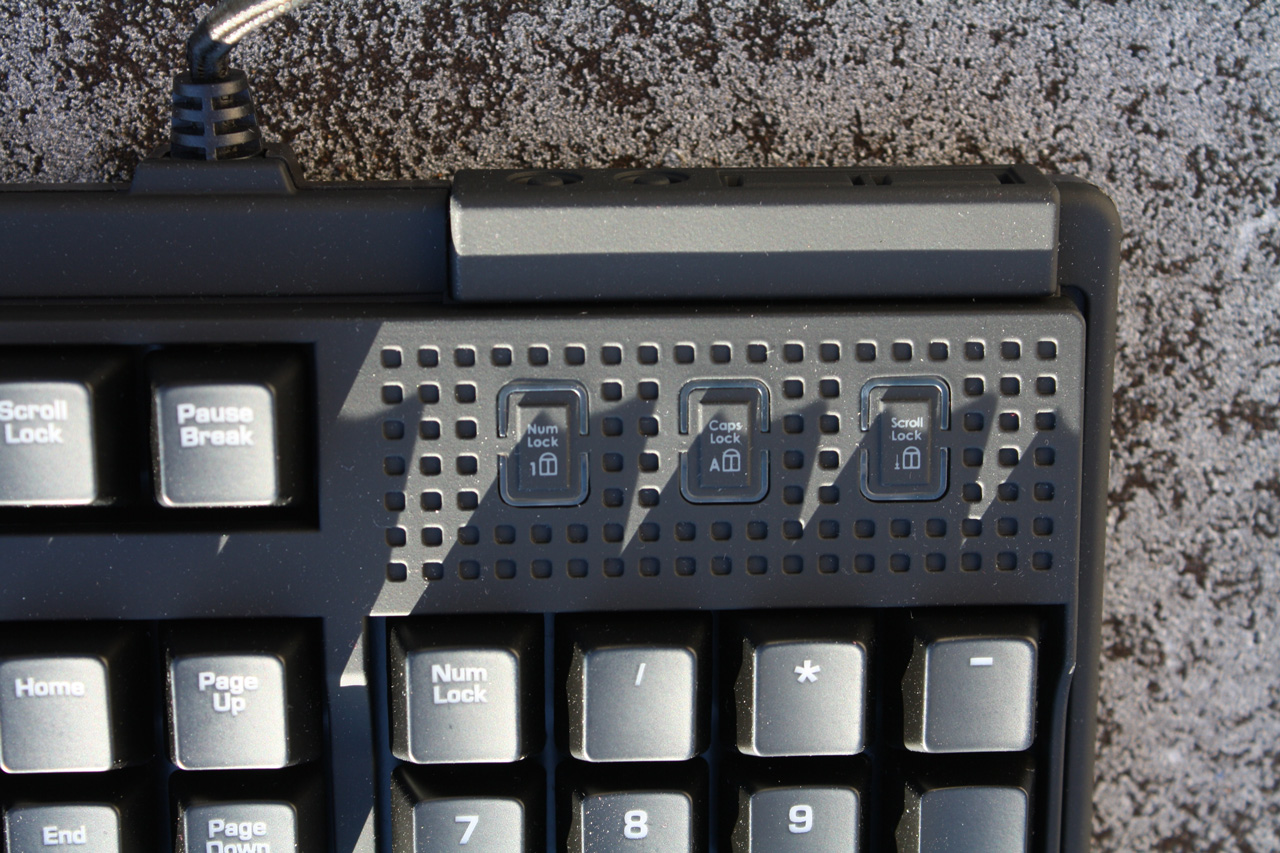 The USB connection is gold-plated as promised, and the cable is reasonably well-braided too. It’s good to see that the cable join to the main chassis is reinforced as well. 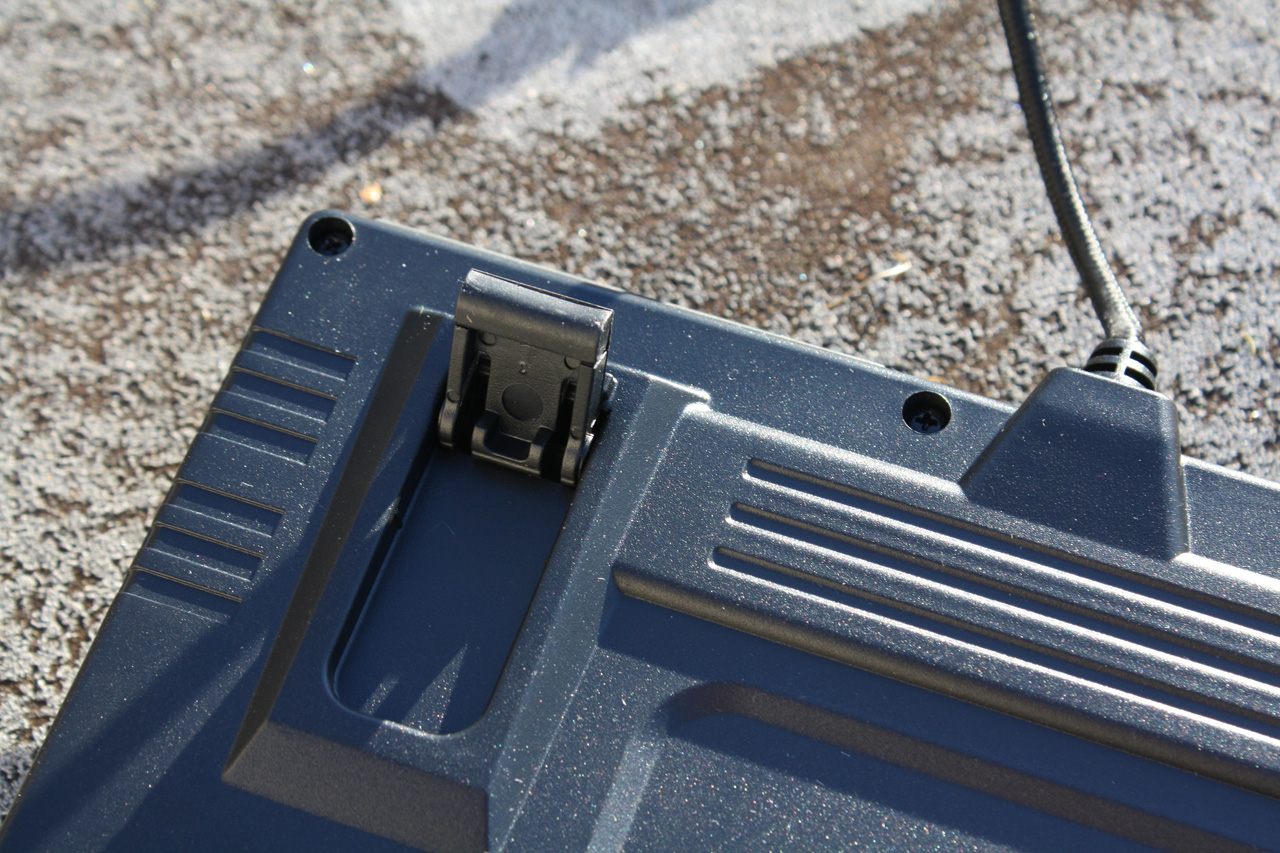 The chassis itself is quite interesting, with a few design flourishes that set it apart from the more pedestrian design of a Filco, for example. For example, there’s a curve and lip between the cursor keys and the navigation cluster and a grid-textured surface around the upper right, where the indicator LEDs for caps, number and scroll lock live. 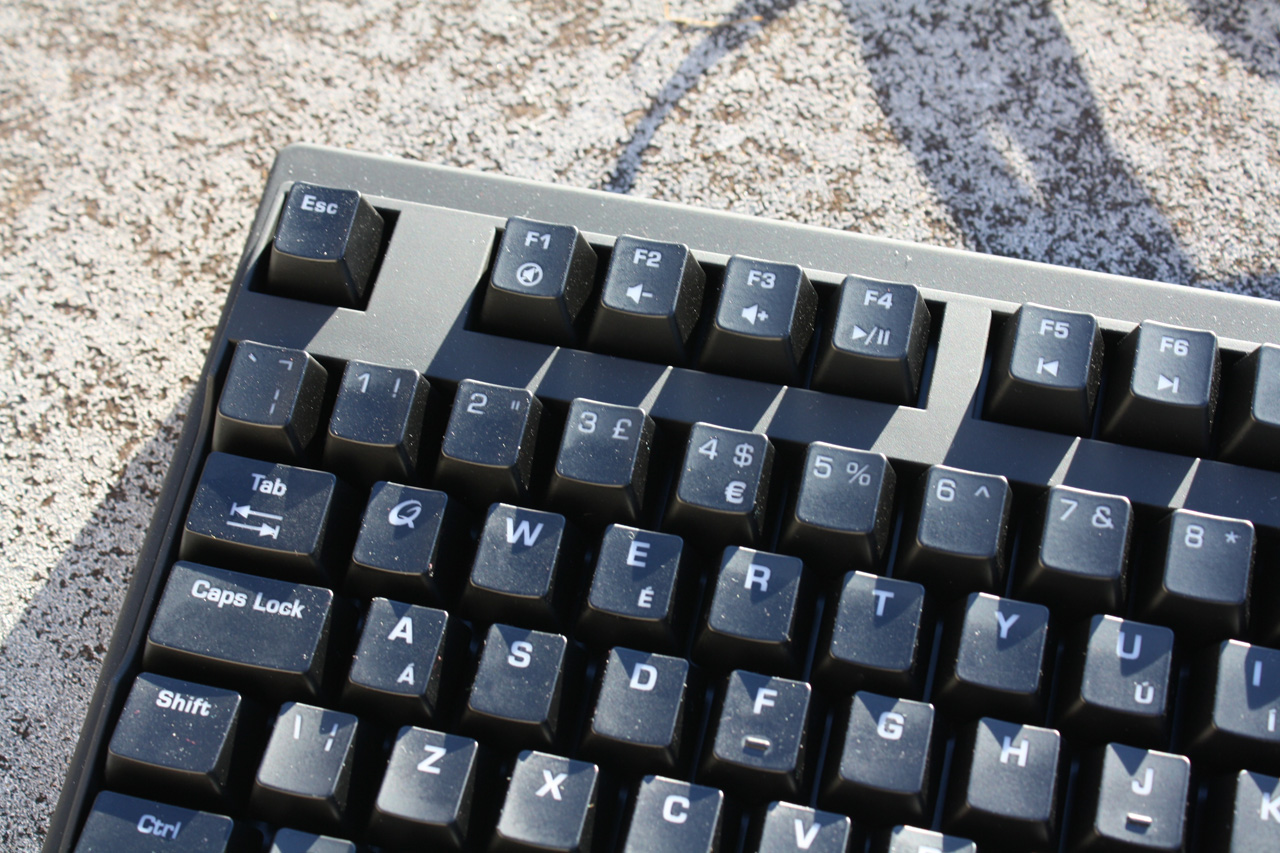 Overall, it’s a solid design that doesn’t get too flashy, but can’t compare to works of art like the Corsair Vengeance K70, Razer BlackWidow Chroma or Cougar 700K.

In order to give the MK-70 a fair shake, I used it as my go-to keyboard at home for a period of one week. The keyboard was used for writing articles (like this one) and playing games, mostly Counter-Strike but also Heroes of the Storm, Borderlands: The Pre-Sequel and League of Legends.

As a writing keyboard, the MK-70 is decent. The red switches hold up to rapid typing without complaint, with the light weighting minimising discomfort from extended use. The backlighting makes it easier to find weird bits of punctuation at night. The font isn’t too offensive or hard to read. The media control keys do their job, allowing me to mute a stream or skip songs marginally faster than I could do with the mouse alone. The heavy weight and well-designed legs keep it in position on my desk. No complaints, but no massive praise either when it comes to writing.

For gaming, the MK-70 is again reasonable but offers little to set it apart from any mechanical keyboard using these Cherry Red switches. Shooters and MOBA titles benefit from the light touch and rapid double-tap that’s possible using the board, but ultimately your own favourite gaming switch is largely a matter of taste.

The NKRO (N-key rollover) is a nice addition though, allowing the keyboard to register unlimited inputs simultaneously while connected over PS/2 (via an included USB to PS/2 adapter).

The blue LED backlighting makes it easy to keep using your keyboard when playing games after dark (and you haven’t bothered to turn the lights on yet), but there are no great gaming features here to set the tone. There are no macros, no special software to track your keypresses or change your layout as a game is launched. There’s no gaming mode to lock the Windows key either.

Overall, there’s nothing wrong here per se, but there’s little to make the MK-70 a keyboard that you feel compelled to always use. At LANs, it’ll be outclassed by cooler keyboards with fancier, most distinct designs. At home, it’ll do the job but be eclipsed by (more expensive) keyboards that boast proper software and gaming-specific features.

The MK-70 is distinctly average, offering a good baseline – Cherry MX switches, even backlighting and a solid chassis – but nothing to really differentiate it from other mechanical keyboards on the market. I’d recommend it if you found one at a good price, but with other keyboards offering interesting software, RGB LEDs or beautiful designs, it’s hard to stay faithful to QPAD’s efforts. 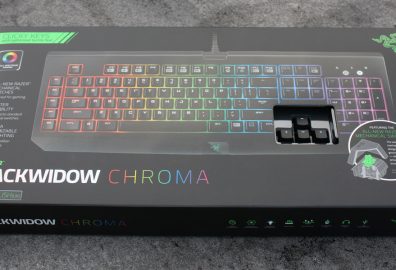 Today we’re going to be looking at one of the hottest mechanical gaming keyboards: Razer’s new...

I wrote a review of the 23andMe genetic testing service. The idea is that you provide a saliva sample and in...