We’ll start with the Sequential Read chart, which looks at the reading side of a large file operation (like copying an HD film). We can see that the H: drive in JBOD mode is faster than its fellow, but RAID 1 offers the second best sequential read speeds – not bad considering the drive’s average speed, as measured by the BIG mode test, is as slow as the slowest drive. 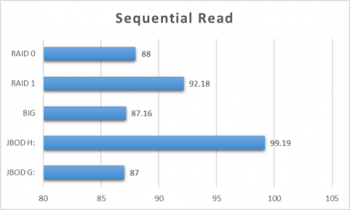 In Sequential Write we’re looking at the other side of that large file operation, the writing of the large file to disk. Again we see that the H drive has a speed advantage, but RAID 0 pulls through with the second highest writing speeds and again a big improvement over the naive concatenation (BIG). 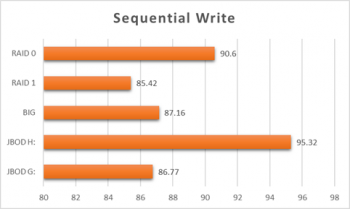 Random Read has a medium-size file operation, with 512 KB chunks. Here we see that RAID 1 comes close to matching the single faster drive. As before, it’s a good way in front of the naive combination and even further ahead of RAID 0 in this case. 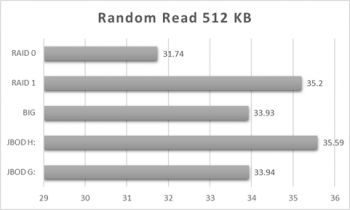 Random Write is the flip side of the coin. Here we see RAID 0 takes a massive lead over any other configuration, boasting a performance improvement of about 30% over even the faster of the two drives. 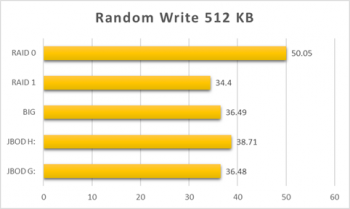 Random Read 4 KB is the micro-sized version of our previous test, looking at even more finely grated data chunks. The test shows RAID 0 performs impressively, with RAID 1 not far behind. 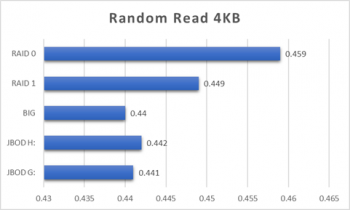 In the matching Random Write 4 KB, we see that again RAID 0 has a massive performance advantage, being about 115% faster than the individual drives. The other results are fairly similar. 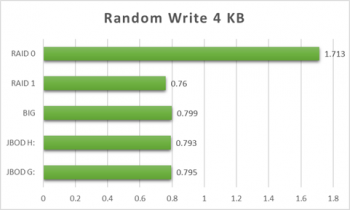 Finally, we look at the effect of queue depth on performance. While the standard queue depth for these benchmarks is 1 and most OS operations won’t go beyond QD6 or so, it is still an interesting metric. The Random Read 4 KB QD 32 test shows that the RAID 1 drive remains fastest, with RAID 0 showing terrible results and the other modes being quite similar. 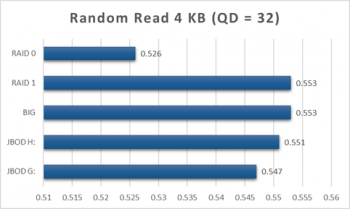 For writing it’s the same story – RAID 0 is fantastically faster (although by a slightly lesser margin than before), while again RAID 1’s redundancy gives it a worse time than its naive rivals. 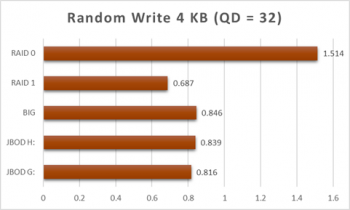 So to conclude this section, I’d definitely recommend RAID 0 if you’re looking for performance – even with drives with mismatched speed and capacity, we saw excellent results for all but the sequential read and write operations. With SSD or faster mechanical drives installed, the advantage of RAID 0 increases substantially. There’s little real downside to going with RAID 1 over BIG or JBOD, excepting if your drives have radically different sizes. For good read speeds and a bit of mechanical failure resistance, RAID 0 is a good choice. You’ve got these options – use them!

The InfoSafe doesn’t score as highly in convenience as it does in performance. While the drive itself is relatively small, light and portable, its trailing wires are rather less so – you must plug in both your eSATA or USB data cable and the AC adapter. This means you can’t really just bring the drive over to your friend’s PC for a quick copy like you would with a USB drive. If it would have been technically possible to have just a single drive be powered up and functional with power from two USB ports, it would have been great. However, I’m not sure that would be technically possible, so I can’t judge the drive too harshly. This is definitely an enclosure that you keep in one place or perhaps travel with, but you don’t hot swap.

As stated before, this enclosure is quite pricy compared to its simpler compatriots: £67 including VAT from StarTech.com. While you could get a USB 3.0 enclosure for £10 to £20, the added drive options do make the price more reasonable – as well as space for two drives, you’re getting a lot of extra functionality vis a vis RAID.

However, this enclosure isn’t for everyone. If you’re just looking for a drive to wang your movies on so you can transfer them between PC and media centre, then you’d be better served with a USB 3.0 or simply cheaper enclosure. If you’re looking for very quick speeds over eSATA and RAID 0 or the reliability inherent in RAID 1, then this is a great choice. 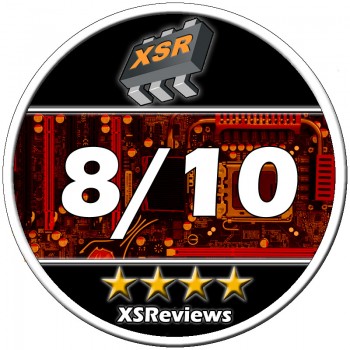 Testing Not a massive ammount of testing can be done with a product like this, but I did use my...