As this is an enclosure, I feel that synthetic benchmarks aren’t an ideal measuring stick – all you’re really measuring is the slowest of two numbers: the internal speed of the drives or the speed of the chosen connection (e.g. USB or eSATA). Since all motherboards will run their drives at the full speed of their SATA ports, I don’t forsee this enclosure performing any differently. For that reason, I’ll keep the synthetics to a minimum and instead speak to the feature set, convenience and value of this enclosure over the test period – which is two weeks.

Firstly, there is the choice of eSATA and USB 2.0 connections. While it’s disappointing that USB 3.0 couldn’t have been included for the price, eSATA is a good backup option that is very quick – if rare even on desktop gaming PCs. As the recommended drive specification is for two 1 TB 5400 RPM mechanical hard drives, it seems the goal of this system isn’t really performance.
Secondly, there is a choice of four different configuration options – two RAID and two others.

RAID 0 offers – in theory, at least – double the speed of a standard drive by “striping” data across both drives, treating them as a single logical volume that can be read or written to by both drives simultaneously. This also has the drawback that a failure of one drive will render the entire logical volume unworkable; that is to say that the failure rate is roughly doubled. There is no redundancy offered with RAID, counter to the ‘Redundant Array of Independent Disks’ moniker.

RAID 1 on the other hand, is built for reliability – there is a perfect copy of data on each disk, so if one drive suffers a mechanical failure it can be noticed and repaired by the other drive. This means that the mechanical failure rate of the drive is roughly halved. Data loss caused by other factors, though, will not be prevented – accidental deletions or malicious damage from viruses will merely be copied across both drives. Read speeds are also increased in RAID 1, as you can read from both drives simultaneously.

BIG is a kind of poor man’s RAID 0, with both drives making up a single logical volume but with none of the speed advantages. This disk mode does have the advantage of being quite simple for the operating system to interpret, and allowing for a full concatenation of drive capacity – RAID 0 can only be as large as twice that of the smallest drive. So if you have a 100 GB drive and a 300 GB drive in the enclosure, in RAID 0 you’ll get 200 GB and in BIG you’ll get 400 GB.

JBOD is another simple mode, where each drive will show up as its own volume. However, this tends to not work with some motherboard / connectivity combinations, with the most common problem being only the first drive will be shown.

It’s definitely a good spread of options that makes good on the promise of two drives in one enclosure. They could have just thrown in JBOD or BIG modes and called it a day, but the inclusion of RAID as well is greatly appreciated.

This disk benchmark looks at sequential and random writes of various sizes. I used two mechanical hard drives provided by StarTech.com – one that was 250 GB and one that was 320 GB, both 2.5″ models. Each test was performed five times.

First, let’s look at the results for each drive configuration in turn: 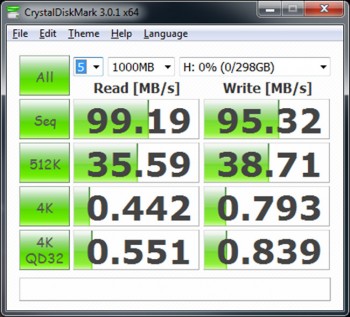 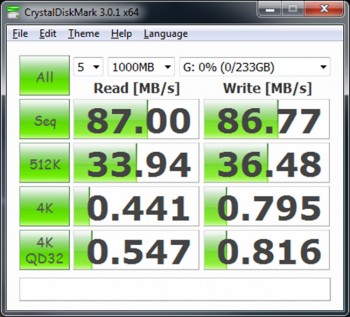 JBOD mode connects each drive individually, and should reflect the individual performance of these drives. As we can see, drive H is a bit faster than drive G. 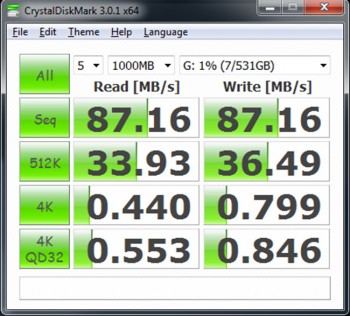 BIG mode is just one big concatenated volume, which should provide fairly mediocre scores as it’s limited by the slowest drive. 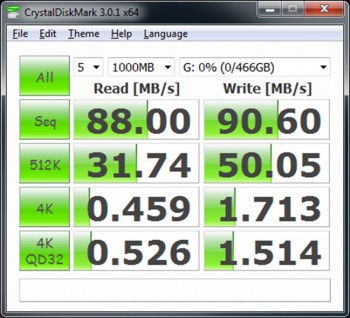 RAID 0 should have faster read and write speeds. 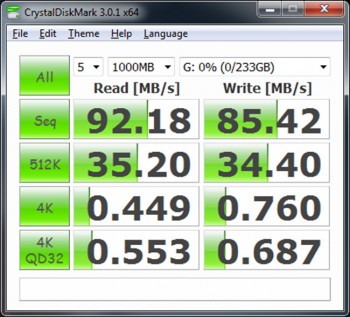 RAID 1 should have faster read speeds.

Testing Not a massive ammount of testing can be done with a product like this, but I did use my...