The Nexus 7 looks quite similar to other tablets from the front – there’s the standard all-black display with a rather minimal bezel, only interrupted by a centre-aligned front-facing camera and a silver ring wrapped around the edge of the display. 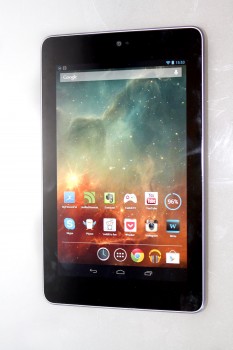 Turning the Nexus over, we see a bit more uniqueness – a grippy, rubberised backing with a dimpled pattern. The word ‘nexus’ is printed a third of the way down the device. Near the bottom, there’s a much smaller Asus logo. Below this, there’s a thin and long speaker grille.  The edges are gently curved on all sides, making the tablet quite comfortable to hold. 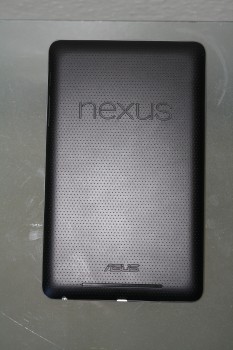 In terms of ports and buttons, there aren’t too many. At the bottom centre we have a micro USB port for charging and connecting peripherals, with a stereo jack sitting a little less than two inches to the right of it (if you were viewing the tablet with the screen facing you). 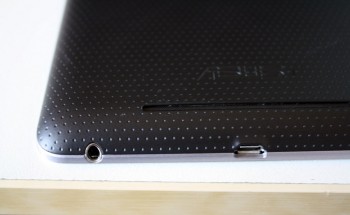 On the right side near the top, there are two buttons – the lock button and the volume up / down. These sit behind the screen instead of jutting out beyond it, granting a cleaner look but making it a bit difficult to find them. Finally, on the left side near the bottom there are three pogo pins, similar to those found on the Galaxy Nexus, and no doubt intended for a future accessory like a dock or car holder. There is no rear-facing camera or mini-HDMI port.

The tablet includes a 7″ display, which is the minimum for a straight tablet these days. The resolution is 1280 x 800, which is impressive for a tablet of this size but not quite Retina levels of pixel density. The display has about three times the screen real estate of the 4.65″ Galaxy Nexus. The whole device is about the same size as the Kindle Keyboard, although it does devote more of its area to its display. 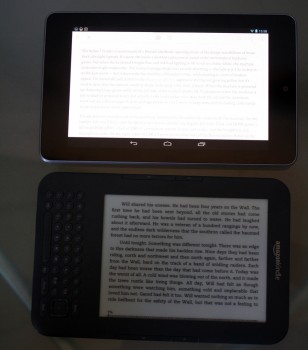 The tablet is of average thickness for a tablet these days, at 10.45 mm – noticeably more than a smartphone like the Galaxy Nexus, but it does provide more grip than a much thinner tablet would. The weight of the tablet is 340g, granting the tablet a noticeable but not overpowering heft. The overall impression is that of quality and substance rather than bulk.

Physical layout The ZOTAC ZBOX Nano XS AD11 Plus, you can see the exhaust from the cooler on the left. Here...

Physical Features The duplicator is quite a sizeable beast, at 170 x 285 mm – that’s about the...