The only real way to test a device such as this was to play around with it for a few days and write up my experiences, so that’s exactly what I’ve done. During the testing I watched a few movies, used several of the internet and social applications, and transferred a lot of my media to the EM 7280.

Considering HD size files are no problem for this device, there’s little to complain about. Everything is snappy and files load quickly (maybe a couple of seconds between hitting play and it beginning to do so) which is a nice change over some of the media players I’ve used in the past.

Starting up a file that you didn’t finish watching gives you the option to pick up where you left off which is great. There’s a wide variety of supported codecs and file types, meaning whatever you (legally) download, you’re very much likely to be able to play it. The fact that Blu-Ray ISOs are supported too is awesome as backing up your Blu-Ray movies can take some time, so it’s good to be rewarded with a simple play procedure.

The inclusion of composite cables as well as HDMI was nice as it made it simple to hook up the player to my TV and amp. The fact that there are optical and coaxial connectors too, should satisfy most people in that respect. Though I still think a component connector wouldn’t have been too much to ask.

Being familiar with the Youtube and Facebook applications on other media players that use a similar backend, I didn’t really notice much that was different with the ones here. They work well, though none of it is particularly quick or intuitive. You really need a keyboard/mouse combo to get the most of them, the social networking ones especially. The fact that there’s only two USB ports is a pain when trying to use a wireless connector along with a mouse keyboard, so some sort of wireless touchpad keyboard is a must really. It’d be cool if Eminent offered a version of this player that came with one as standard. [ Apparently they have one coming soon. Huzzah!]

However, what the Eminent player does that many others don’t, is allow for the addition of about 30 other applications. The implementation of this feature is quite poor in that you have to get on your PC, register your device, setup up an account and then subscribe to the apps. before they appear on the player. The options though are quite nice. There’s a Nickelodean channel (that I couldn’t get to work), a Gametrailers videos option (though no AVGN) and surprisingly a PornHub channel. The latter worked about as well as Gametrailers, reasonable quality videos with fast forward function. Annoyingly though I wasn’t able to back out of a video once it had started, you either watch to the end or hit the home button and barge your way through the menus again.

Another annoyance with a few of these apps. is that a lot of them – despite me selecting English – defaulted to Dutch. This made navigation and especially trouble shooting very difficult. I liked the addition of extra applications and the ability to choose which ones I wanted, but there were so many annoying flaws that it left a bit of a sour taste in my mouth. .

Eminent asked me to post the following addition from them:

“The Appcenter remained at a beta stage while testing by XSreviews. The Appcenter was only open for reviewers. In the meantime, Eminent worked hard to resolve deficiencies. Now, the Appcenter is at an advanced final stage.”

Eminent also claimed no responsibility for the usability of individual apps. though it said that the Nickelodean one should be working. As far as the Dutch popping up, apparently that’s the language it was made it. Who could expect them to splash out for a translation service?

While I didn’t really have much of an issue with the layout of the operating system, it did feel a bit wasteful at times. The main screen specifically has far more blank space than icons. Couldn’t there be a bit more information on display? Perhaps last viewed files? That’d be nice. If I didn’t finish watching a movie I can quickly reselect it and get back to playing.

Weirdly, with the movies, music and images selections from the home page, you get alphabetically sorted files. However, if you use the manager to manually sift through your HDD or USB (my still preferred method as I know where everything is and don’t have to search through every single file) I have no idea what order they’re in, but it’s certainly notalphabetical.

Also, why no TV show section? Instead, any video file you add to the Eminent player is immediately indexed as a movie. Not particularly helpful. File transfers are still a bit of a pain also and while I found wired ethernet connections were probably the quickest distant method of adding my media to the internal hard drive, I’d still recommend the technically savy take it out and SATA connect it to their PC. Files will transfer much faster and the use of a mouse on a Windows machine (along with simply copy/paste commands) is much, much quicker and simpler than trawling through layers of menus on the EM 7280 itself.

A minor gripe, but some of the key placements on the remote were a bit odd too. To get access to the copy/move menu, you need to hit the green button at the base of the control. This is irritating as your standard position is up by the navigating D-Pad controls, so it either requires shifting down, or using a second hand. Also, what’s with all the numbered buttons? I’ve used this player for a few days now, but can see no real need for them. This remote smacks of OEM.

This is a good little media player, but it’s far from the best I’ve tested and it feels very unfinished. There’s a lot of niggly features that I feel were either rushed or have yet to be completed. I liked the extra apps, but implementation could use some work. I didn’t really like the OEM feel of the controller and the file transfers were still frustratingly slow. Give me a standard USB 3.0 port, please.

However, with these things said, media viewing was absolutely fine. The watching of HD videos was snappy and quality was high. Many file types supported meant there was really no headaches in watching movies or listening to music, it was just everything else that could use a bit of work.

Considering you’re looking at about £150 for a setup like this, I’m not sure if I’d recommend it over some of the other media players I’ve reviewed before. This is certainly a step in the right direction, but if I was actually paying for this hardware, I’d be waiting for the next generation before splashing out.

Menu system could use some work
No USB 3.0 standard port
Controller has niggly annoyances
No component port(s)
Applications feel unfinished 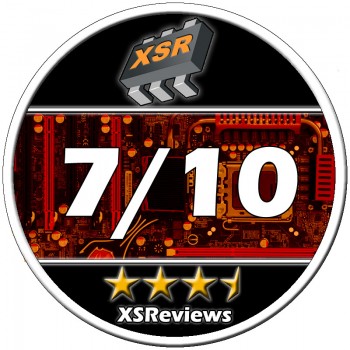 Presentation Normally when I get my hands on an Arcade title, I’d take it with a grain of salt because...

Software 2 Applications are perhaps the biggest draw for this little player, as it includes some that...