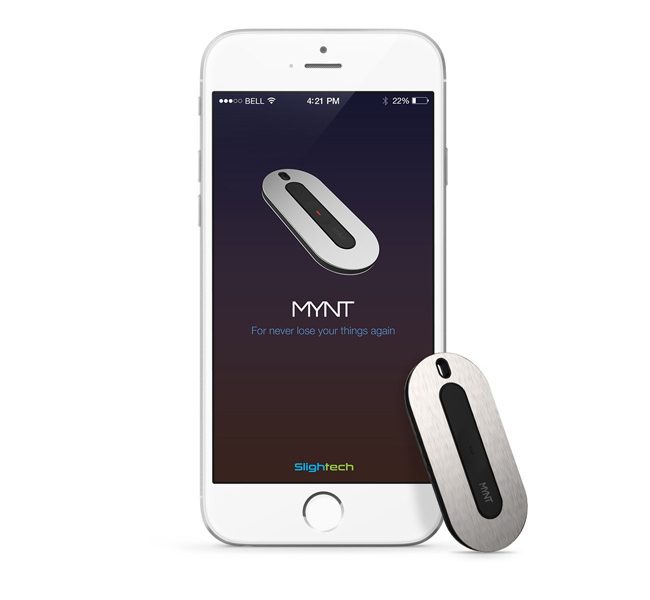 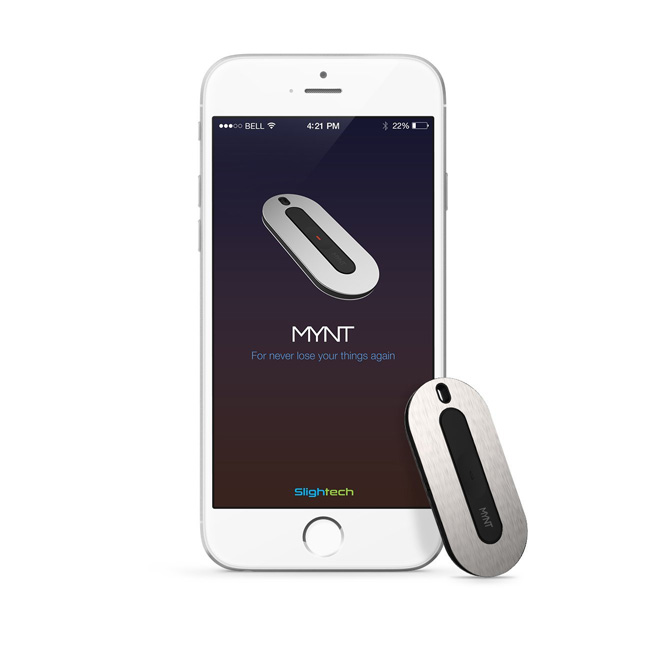 The MYNT is a smart tracker, a tiny dongle that can be attached to useful items like your keys or wallet so you can track its location on your phone. It also works the other way around, allowing you to find your phone if you have the MYNT in hand. There are some other useful capabilities built in too, so let’s take a closer look in our rapid review.

The MYNT is a small lozenge-shaped item tracker with a stainless steel shell that can stand up to daily use. It’s also water resistant, and there’s an optional shell that makes it waterproof.

MYNT is as thick as two credit cards, so it can fit easily in a wallet. It also has a small hole that allows it to be mounted on a keychain. It weighs 23 grams and measures 5.1 x 2.5 x 0.3 centimetres.

You get the MYNT in a small box which includes a small loop, a battery and some 3M adhesive. The item tracker uses CR2032 watch batteries, and should last for about one year on standby, or three to six months during regular use. 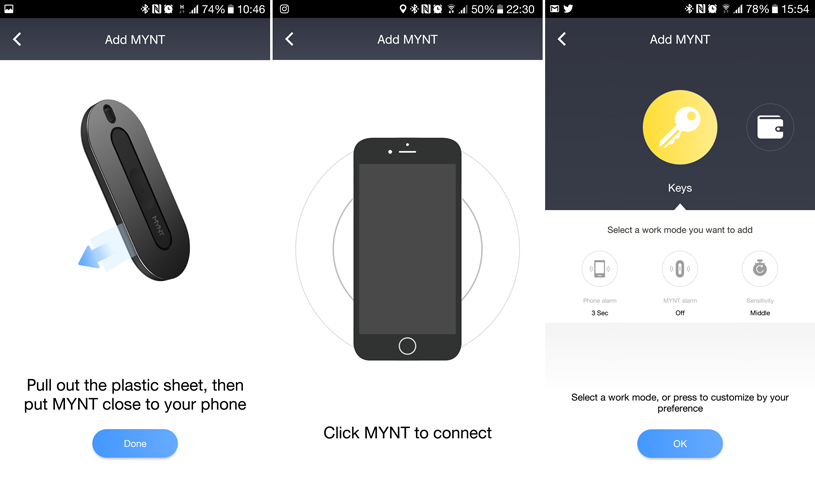 When you first set up the MYNT, you are asked to press the button once, select the MYNT in the app, then choose which way you’ll use it: Keys, Wallet, Purse, Car, Child, Pet, Backpack, Suitcase, Luggage. That determines how sensitive the tracker will be, and how long the alarm will play on the phone and the MYNT itself. You can change these settings yourself afterwards, so you’re not locked into whatever you chose initially.

With this setup phase complete, you’re able to start using the MYNT properly. You can ring the MYNT from your phone app, or vice versa, and see where the MYNT was last spotted on a Google Map. As the connection is made by Bluetooth only, this isn’t much good if someone runs off with your keys, for instance. 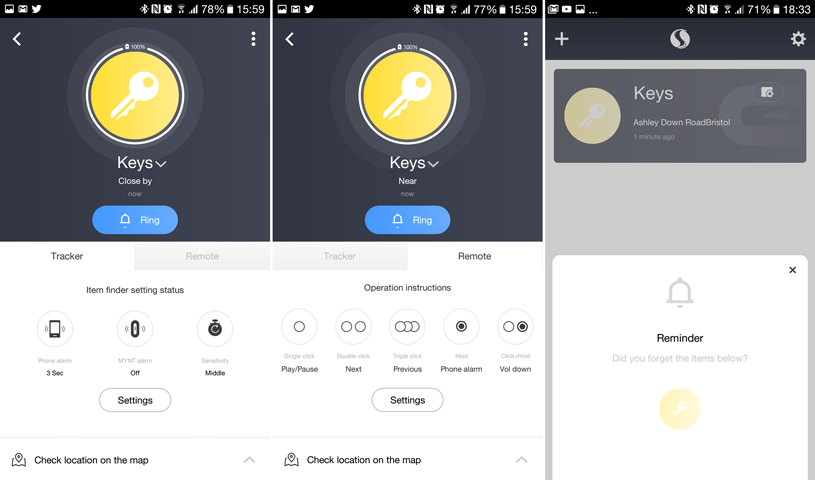 You can also choose how the MYNT should act as a remote. There are five different commands that can be defined using the single button of the MYNT: single click, double click, triple click, hold and click-and-hold. You can choose between several modes — music, camera, presentation — or choose your own actions from MYNT’s options, allowing you to have any combination of camera, presentation and music controls active simultaneously, for example.

If you do lose your item, you can mark it as lost in the app so that other MYNT users can find its location if they’re nearby it. Unfortunately, MYNT hasn’t really taken off to such an extent that another MYNT user would be at all likely to find your lost item, unless you personally equipped your family and friends with the app. 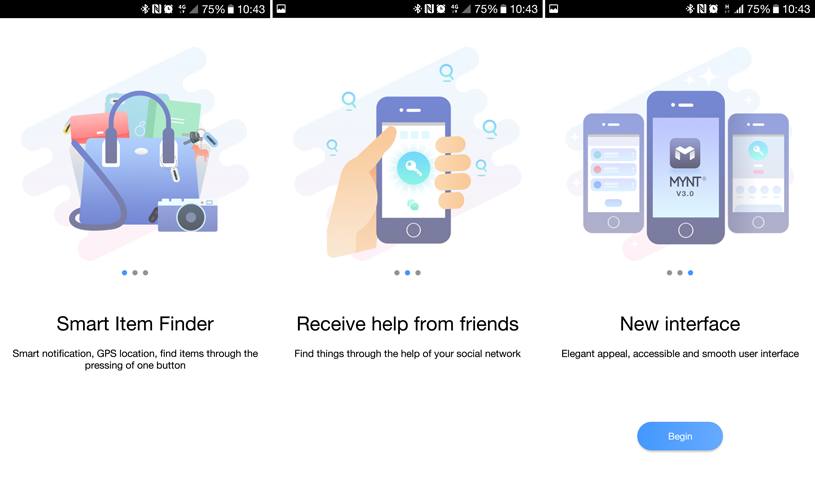 Unfortunately, in our testing the MYNT proved to be an unreliable companion. We frequently got alerted that we had left our keys behind, when in fact the MYNT had just randomly lost Bluetooth connection to our phone, despite the two devices being mere feet away from one another. Having your phone start blaring music and asking “Did you forget your keys?” when the keys in question were sitting inches away got old pretty quickly.

In other situations, the status screen would rapidly switch between “Far”, “Near” and “Disconnected”, preventing use of the accessory. This was not an uncommon occurrence either; it was actually a lot of work to get the MYNT to stay connected long enough to take screenshots of the app or test the various features. This is kind of a deal-breaker for a tracker, which is only truly useful when you can trust that a lost connection means that your MYNT has physically left your location.

We have read some reports online of excessive battery drain, but this did not seem to be the case for our unit; it read at 100% battery for the bulk of our testing and will likely stay at 100% for the rest of its working life.

The MYNT is a good idea, wrapped in a decent app but hobbled with dreadful connectivity. If it could maintain a Bluetooth connection consistently, MYNT would be worthy of consideration. As it stands however, this item tracker has misplaced its raison d’etre. 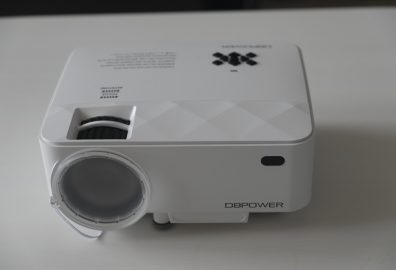 We normally review premium projectors for gaming, made by BenQ and others, but today we’ve got... 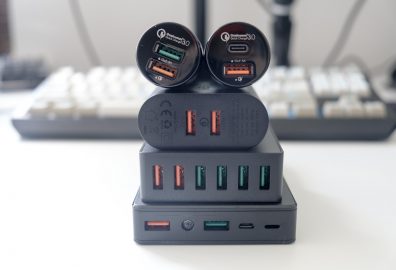 Aukey is one of the best known makers of mobile accessories, with a massive range of chargers, battery packs,...