Mooboxes are cute, classic toys that make the mooing sound of a cow when upturned. The Moobox, on the other hand, is a modern wireless security camera, capable of recording video and audio in HD, automatically recording events and letting you stream live to your phone. We’ve got this newfangled Moobox in to review, so let’s begin! 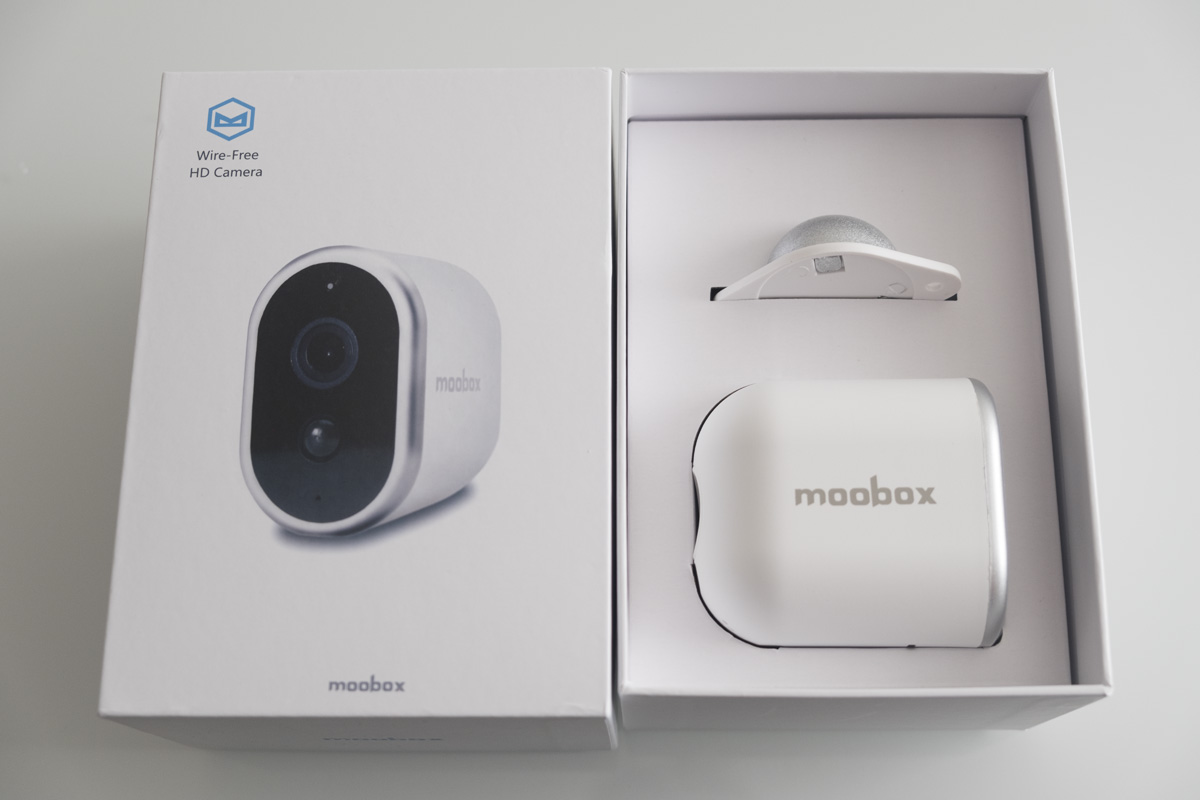 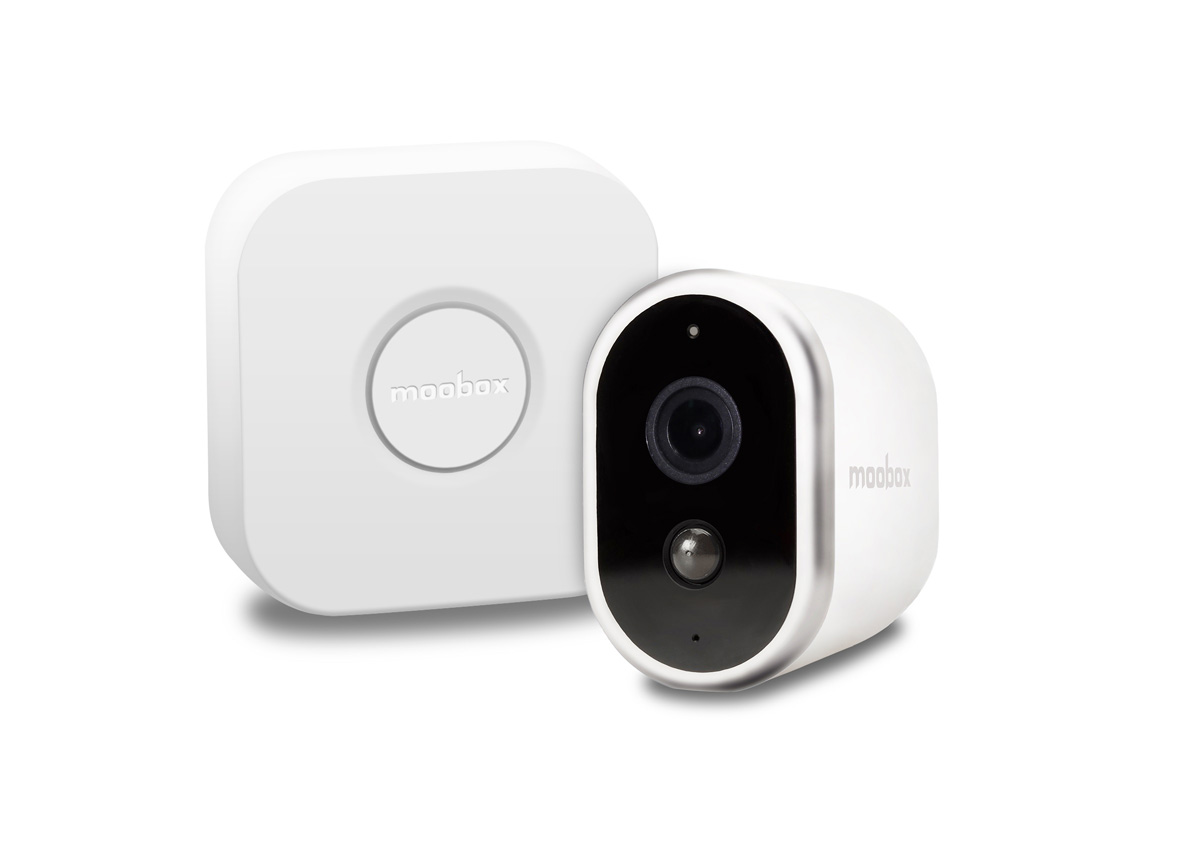 The Moobox camera is a chunky white spheroid made from durable ABS plastic. While many security cameras look pretty menacing, with brutalist designs and dystopian vibes, the Moobox is pretty cute. It’s also pretty obviously a camera, which ensures it 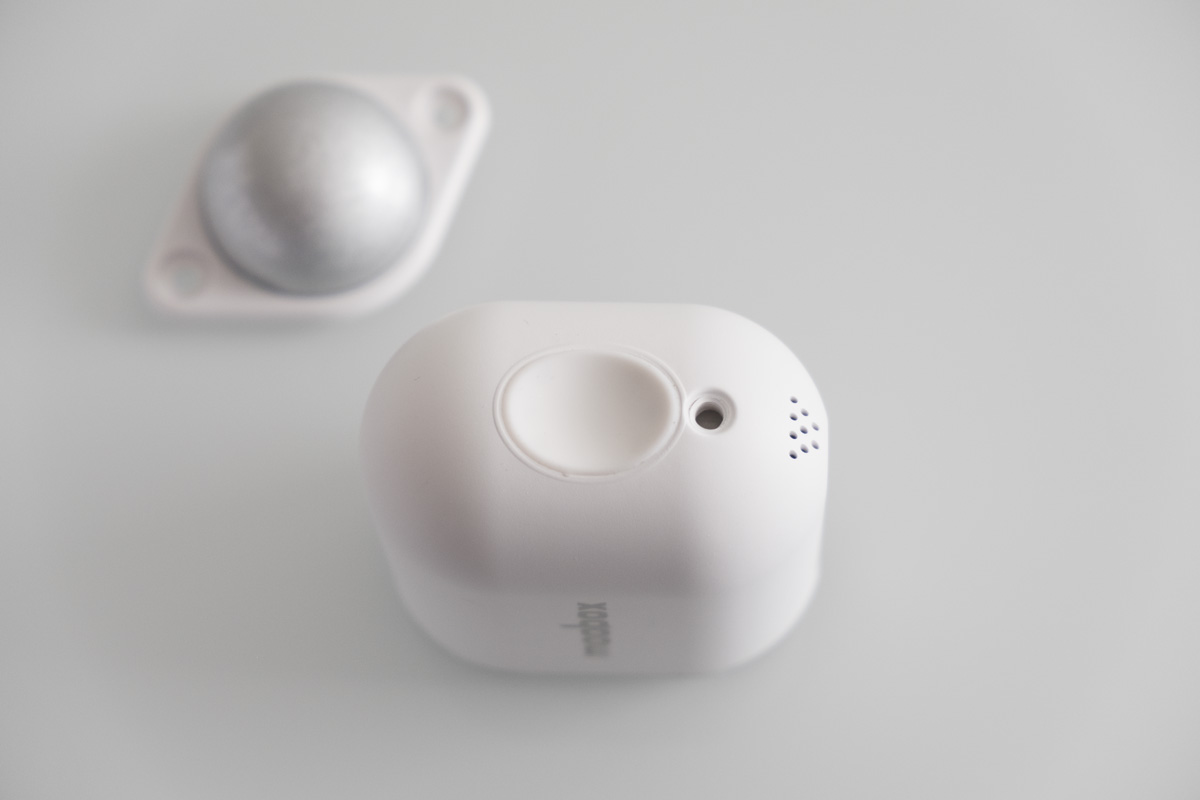 A large magnet in the rear allows it to connect to its spheroid base, or be attached to other metal objects. The base can be screwed into position, or secured with the adhesive pad provided. 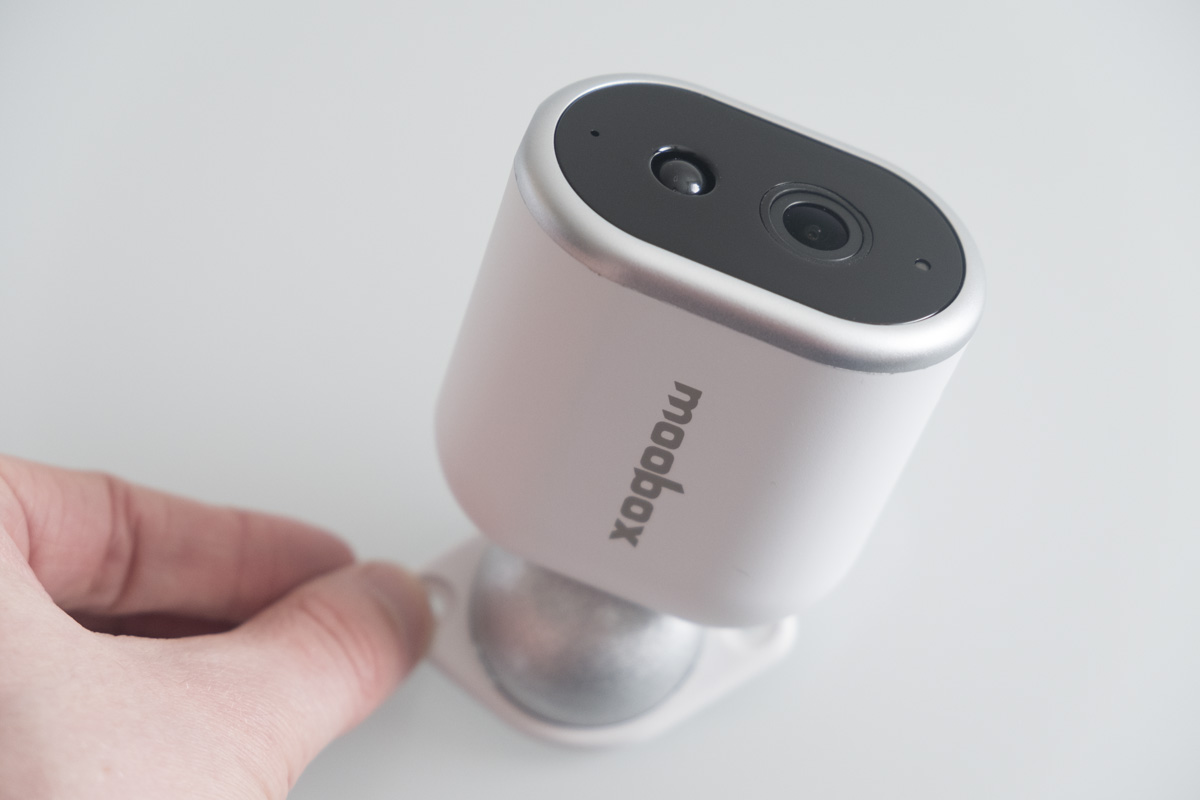 The camera has a 120° field of view, as well as IR night vision up to sixteen feet. A microphone is also included. 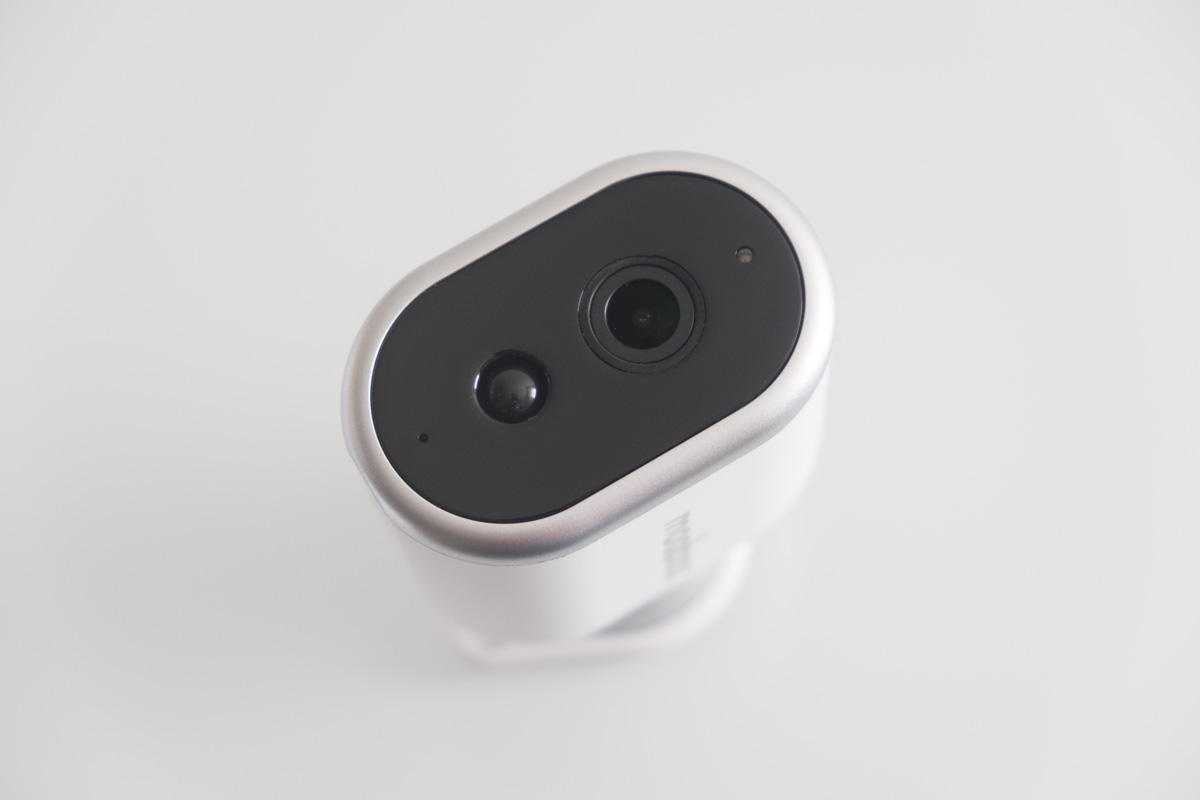 There’s a Micro USB charging port and a speaker on the bottom of the camera, and a small button on top. 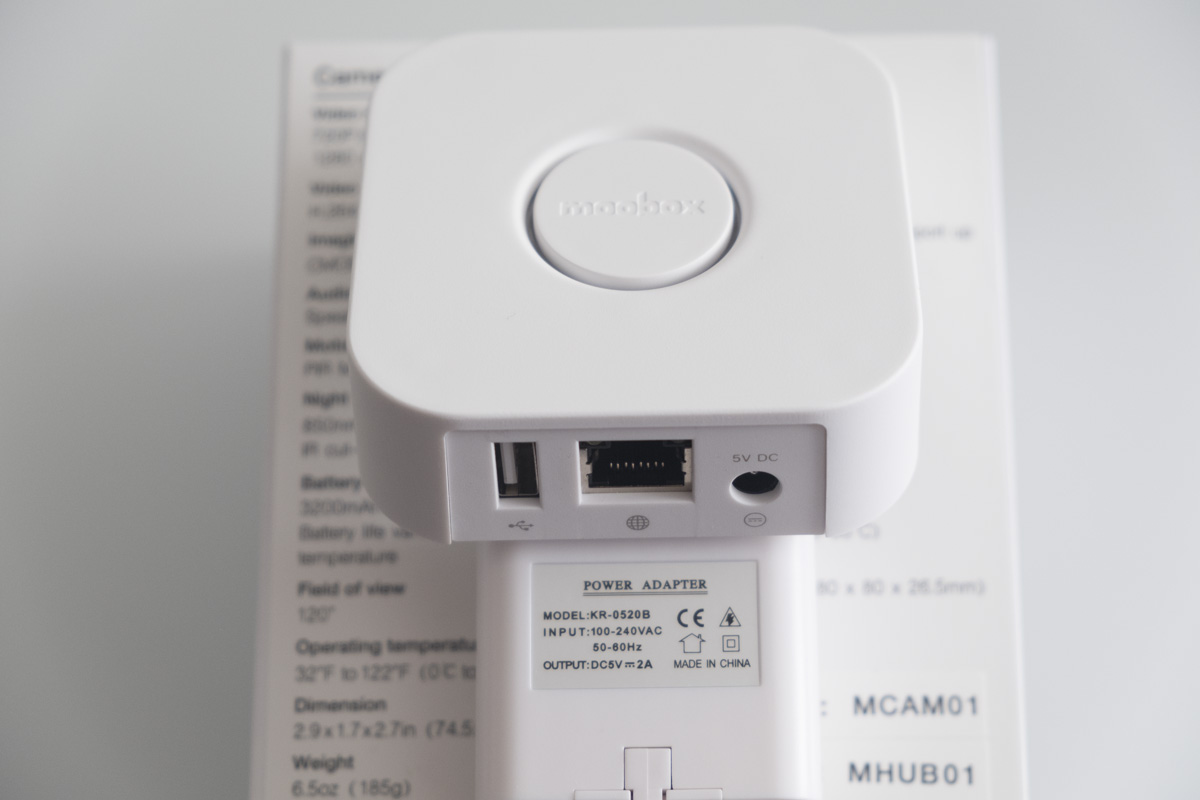 The camera connects to the Moobox hub. This small white box has an ethernet input, a power input and a USB port. 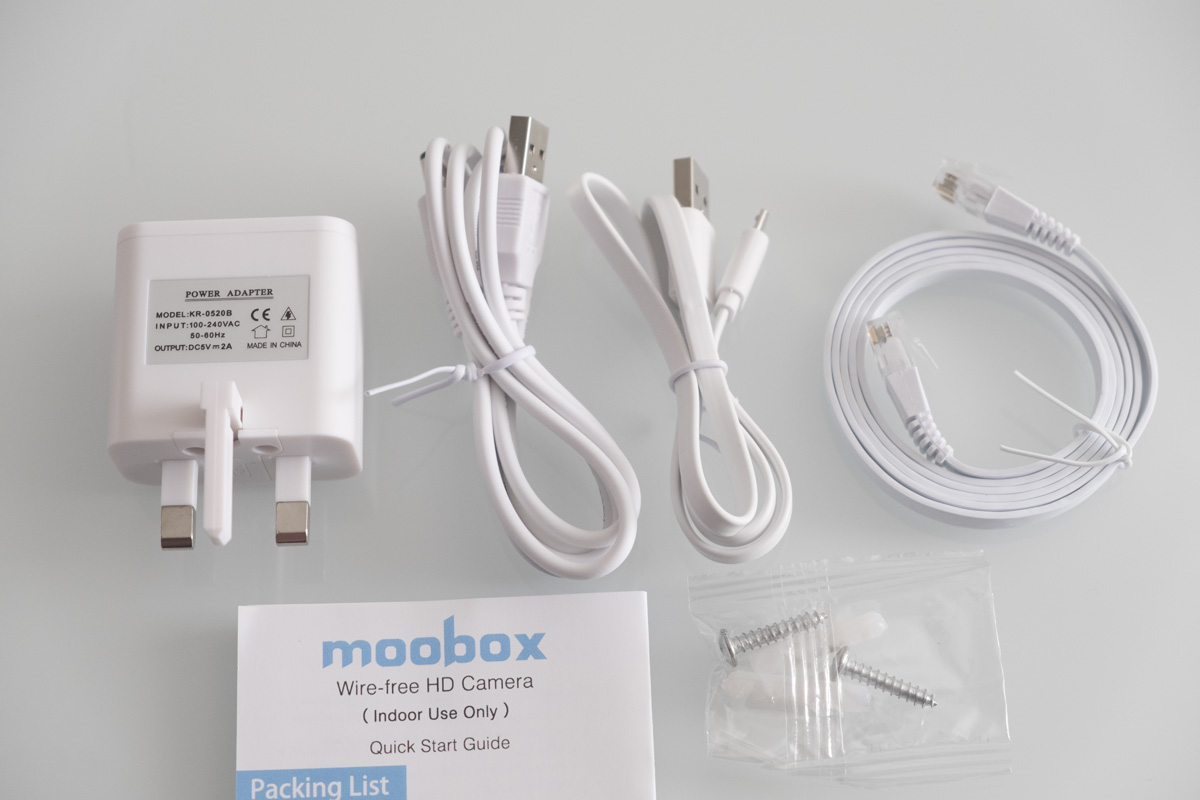 We used the Moobox for about a week, going through its setup procedure, placing it in several locations around our home and using the app regularly. Here’s what we found.

Setting up the Moobox is pretty straightforward. 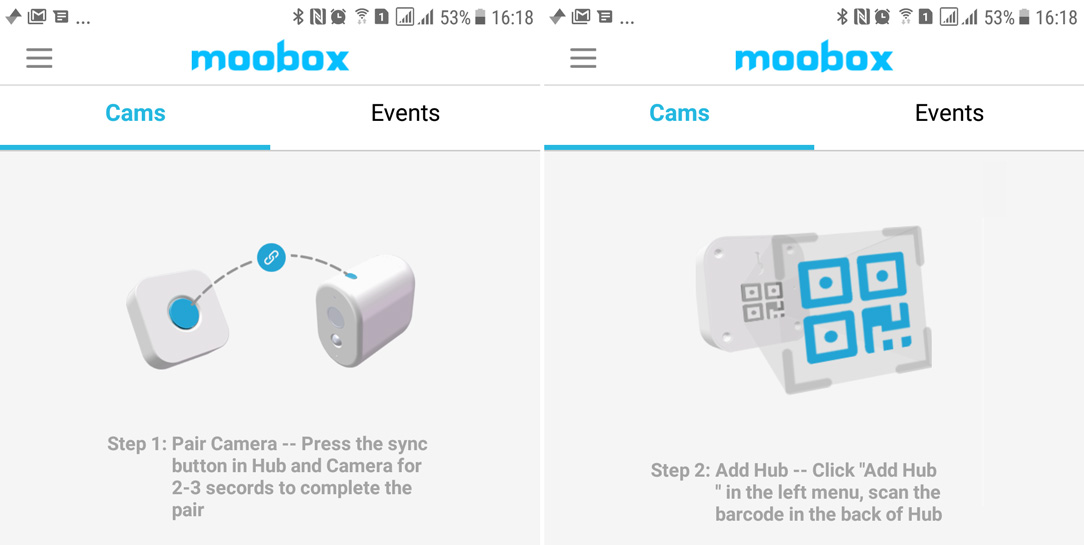 First, you’ve gotta pair the camera and the hub by holding their buttons for a couple seconds while they’re in close proximity. I wasn’t able to get this to work while they were a foot away, but when they were nearly touching it worked fine. Once paired, you can install the Moobox app on your phone and use it to scan the QR code on the bottom of the hub. 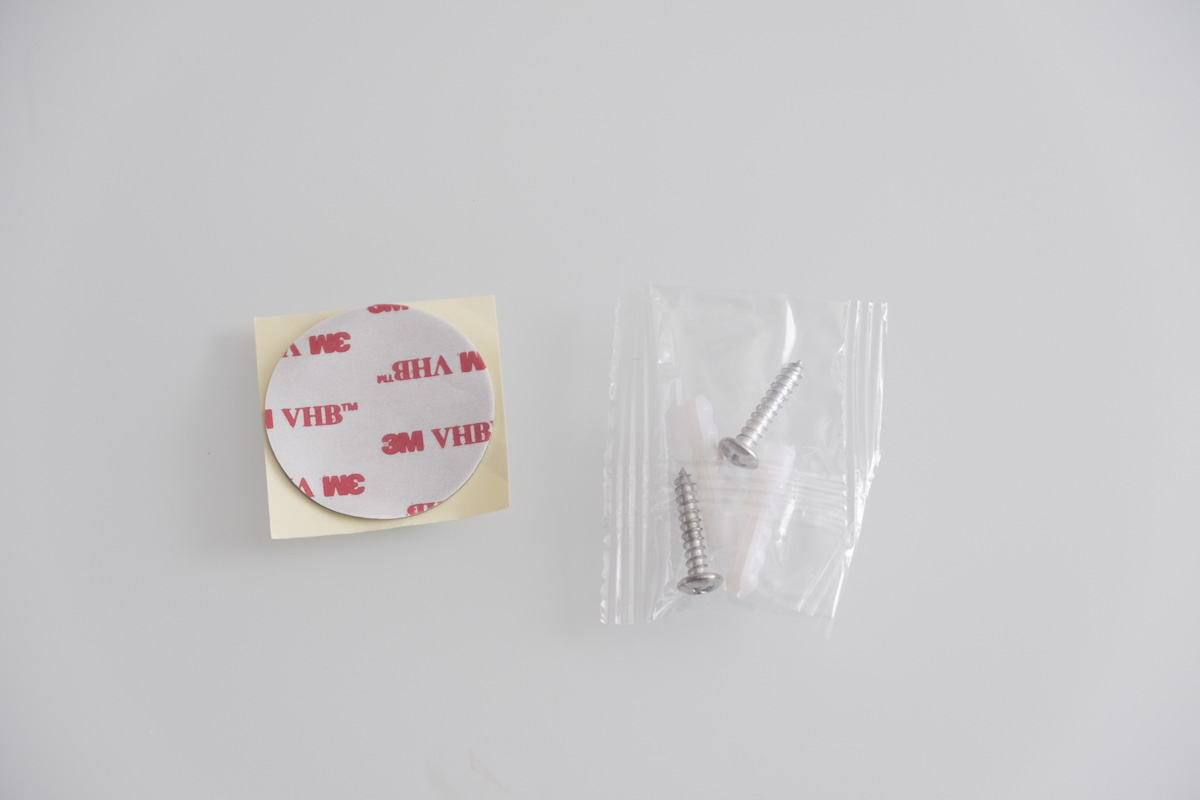 After that, you’re able to place the camera wherever it needs to go. You can secure it to a wall or another surface using the adhesive or screw provided, or just place it on a flat surface. 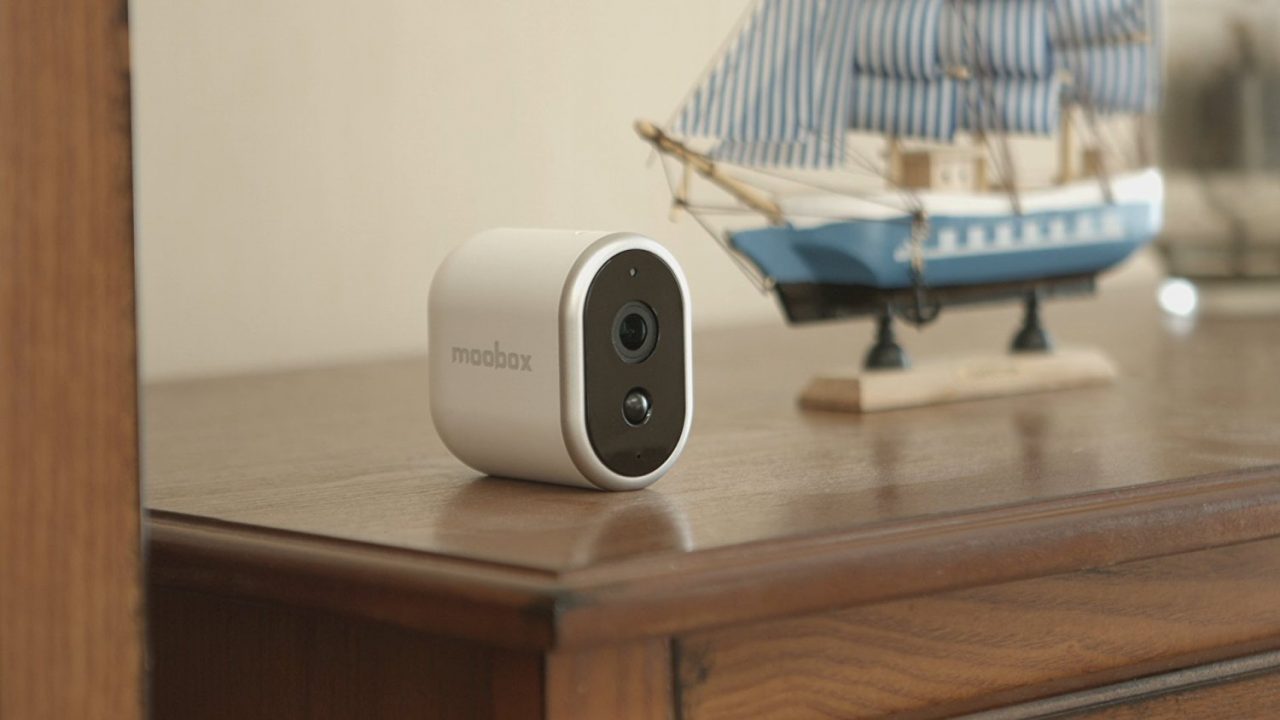 Finally, my model ship will be safe!

The camera is only rated for indoor use, although Moobox do promise that a waterproof camera suitable for outdoor use is forthcoming. You can set up the camera to look through glass, e.g. to watch your driveway, but there are some serious limitations: the IR LEDs will be reflected at night, resulting in a useless image, and motion detection won’t work either. 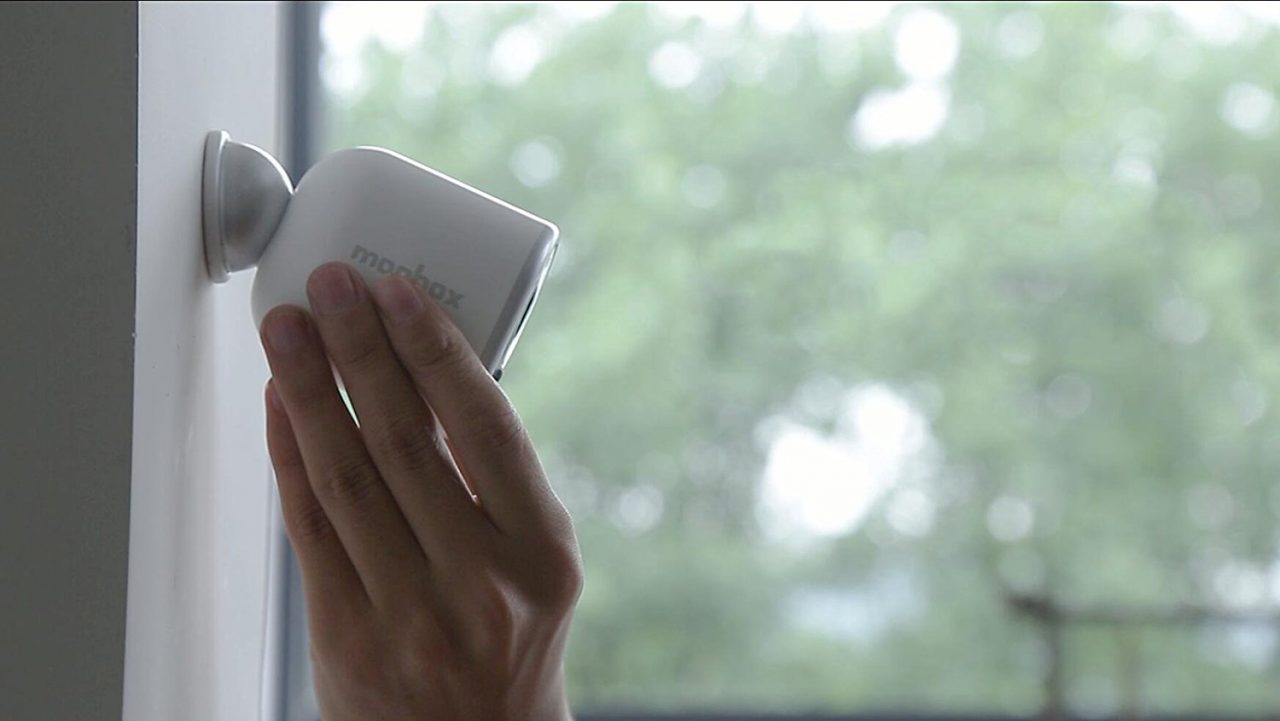 After the installation was complete, we decided to try the Moobox in several areas to give it a comprehensive evaluation. We set the camera up in our entryway initially, then moved it into the living room and just outside our front door on subsequent days. 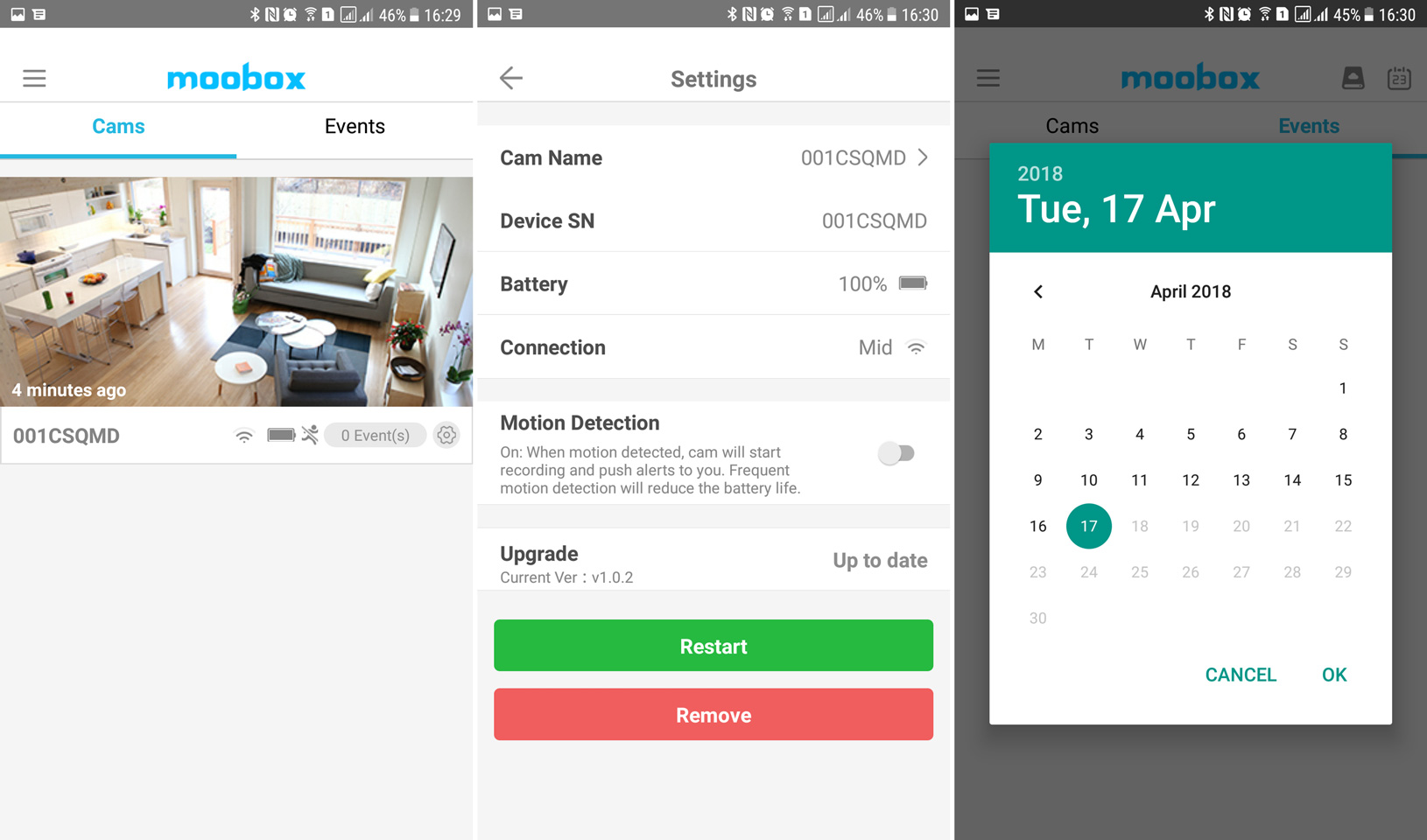 In the app, you can stream live video, adjust the video quality between three settings, turn on and off motion detection, and even talk to someone through the cameras’s mic and speaker combo. We found the app to be laid out well and easy to use, although it did crash occasionally on our Android phone, a Galaxy S7 Edge.

We liked the fact that you can use the app whether you’re on the same wireless network or on another continent, making it easy to check up on your house while you’re away. I’d imagine that if you have pets or vulnerable relatives, this would be a good way to make sure they’re doing alright as well. Connecting to the app takes only a few seconds, and there’s not much delay so it’s quite possible to carry out a conversation. It’s nice as well that the Moobox doesn’t require a subscription for streaming video or accessing your rolling seven days of video storage. 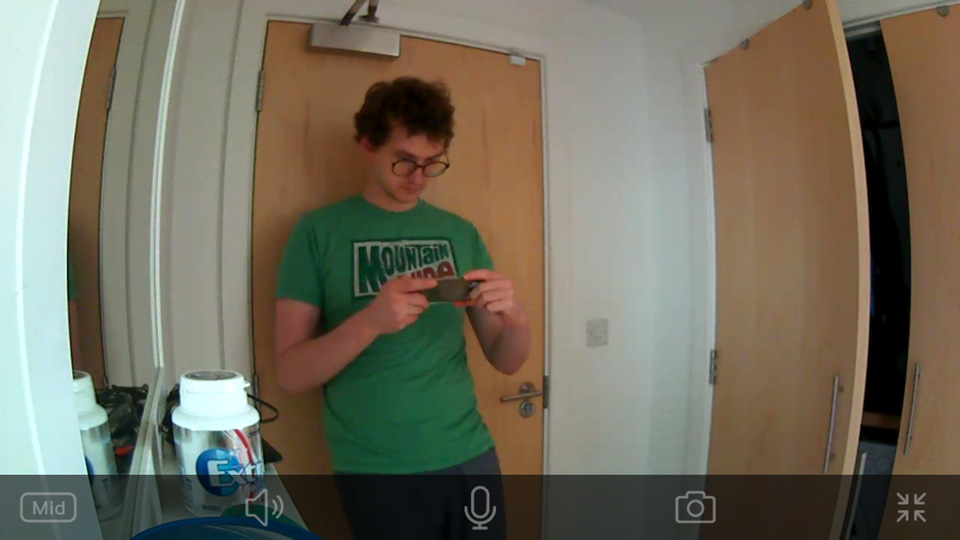 The wireless connection quality was impressive, and we didn’t experience a dropout or intermittent lag for the entirety of our testing. This was despite the fact that the hub was at one side of our (admittedly modest) flat and the camera was at the other, with three walls in between. That’s a pretty impressive result, and a necessary one given that some users may be forced to keep their hub next to their router in order to plug in the provided network cable.

However, the Moobox did exhibit some weaknesses as well. One major one for us was that the video quality of the feed could be higher. The original Moobox crowdfunding project promised a unit with a 1080p camera, but this one tops out at 720p. The 120° field of view also means that the image is slightly curved at each edge; you can see the door above is quite warped. The low resolution and slight curvature makes it hard to see small details, even on the high quality setting, and if you’re using the box for security purposes then it’s really important to capture a clean image of any evildoer. It’s also a bit annoying if you’re using the camera to see how long the dryer has left before it finishes, although this isn’t likely to be a common use-case!

The app also seems to be missing some functionality — there’s a camera icon when viewing a live stream which I would guess should take a photo. However, pressing the icon doesn’t provoke any kind of response, so I’m not sure if it’s actually taking a photo and I can’t find its location, or whether the button just does nothing. Weird! 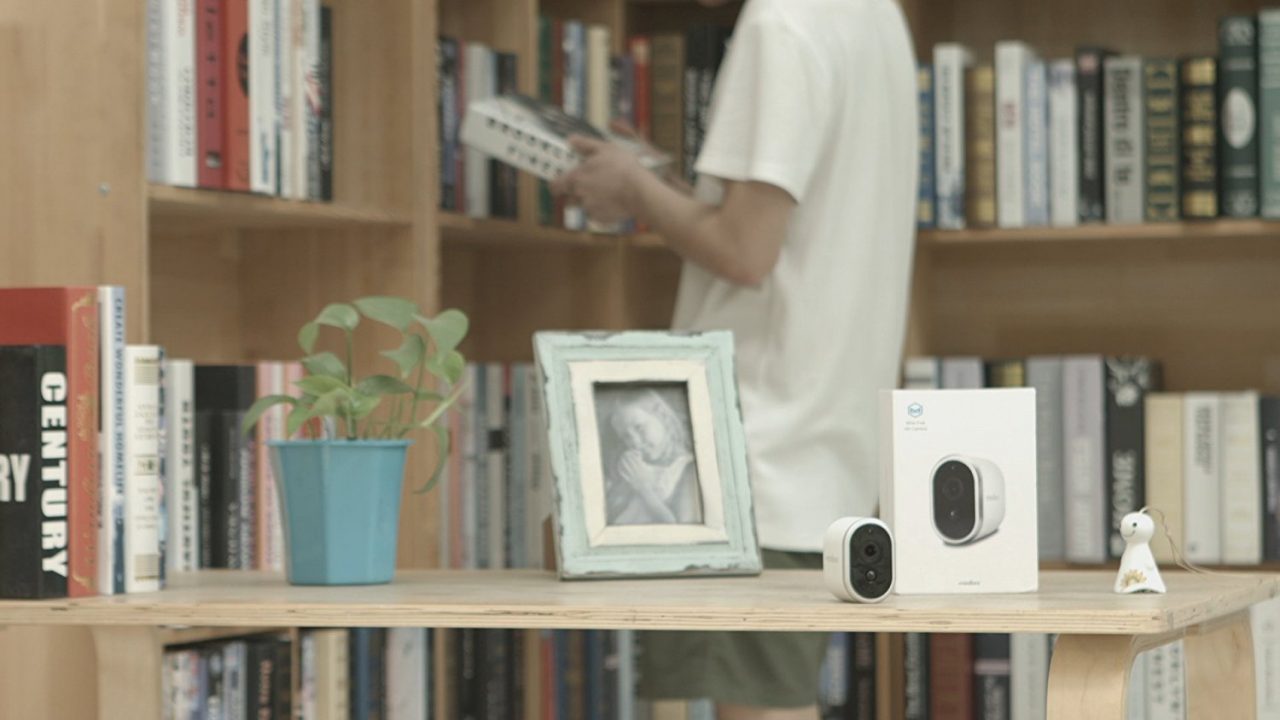 Finally, the Moobox itself is quite obvious. Its matte white body doesn’t blend in, it makes an audible click when it detects movement and starts recording or streaming, and it produces visible red LEDs while in its night mode. In most respects, this is a good thing — it means that using it to creepily spy on people is a challenge; you have to really commit to being a creep and lose any plausible deniability.

However, if you intend the camera to be used against thieves or other potential miscreants, it makes the Moobox a very obvious target. Sure, the video footage will be backed up into the cloud, but you’re unlikely to get more than a two second sighting of any self-respecting criminal when the box can be turned off with a button press, moved or destroyed. This makes the Moobox much better for keeping an eye on pets and children than for safeguarding your belongings. That’s fine, but it’s worth keeping in mind.

The Moobox is as fun and functional as its classic namesake, offering an easy way to look after your home, pets and family members while you’re away — whether you’re in the next room or the next continent. The app has a few quirks and video quality is limited, but for indoor use these aren’t massive problems. All in all, this smart camera justifies its just over £100 asking price. 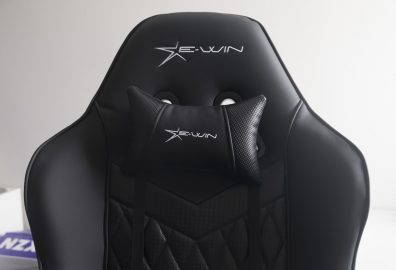 The E-Win Europe Champion Series CPH. It sounds like a prestigious esports event — maybe in in... 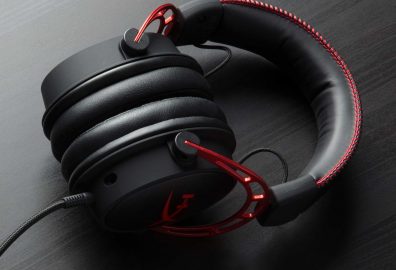 As I write this review, the other half of the screen is dedicated to Counter-Strike. Teams from across the...