Mad Catz is in an interesting place. The long-running peripherals company died a death in 2017, but returned as a new company a year later. The company has since released updated versions of many of its classic peripherals, including the R.A.T. and B.A.T. mice that I knew them best by. Today we’re looking at one of these, the B.A.T. 6+, which seeks to update the usual Mad Catz formula – a modular design with an angular appearance and a focus on build quality – for the new era.

So, forgive me for not typing out the caps and periods every time, but let’s talk about the Bat 6+. Out of the box, it’s a relatively slim design for Mad Catz, with an ambidextrous shape that includes side buttons on both the left and right – meaning it’s actually useful for left-handers. The twist, as is often the case for this brand, is that there are ‘wings’ in the box that can be installed on either or both sides. This transforms the mouse into a wider, comfier design that is probably better for work and slower games but less suitable for fast-paced and competitive titles. Besides the wings and general pointiness – the polar opposite of Logitech’s recent designs, for instance – there’s some curiously subtle RGB lighting that appears behind the side buttons and near the tail of the mouse, but is actually a single piece when you look at the mouse from the bottom (or take off the side grips and palm rest). It all feels well put-together for a mouse that’s intended to go to pieces, and makes a nice alternative to the somewhat flimsy feeling ultralight mice that are so popular these days. 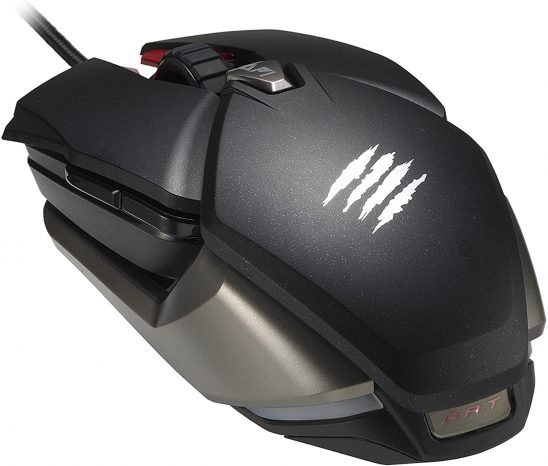 Internally, you’re getting fairly high-end components. The PixArt PMW3389 sensor is a well-regarded optical option, and it’s paired with a 2000Hz polling rate that outperforms most other mice on the market. Does 2000Hz help? Yes, marginally, but it’s more of a marketing thing than a true advantage unless you happen to be playing games professionally and every millisecond matters – and in general, things like shape, weight and button positioning will make a bigger impact to your success in competition.

One big downside is the cable. It’s thick and stiff, which was all the rage 10 years ago – when Mad Catz perhaps reached their peak – but in terms of usability, it’s not what you want. Instead, flexible ‘shoelace’ cables are preferred these days, as these are perfectly durable enough for regular use, yet they make your mouse much easier to move around at high speeds. If you’re using a high DPI setting, then this likely won’t make a difference, but it’s something of a deal-breaker for anyone that prefers low DPI settings.

For my own testing, I found the Mad Catz Bat 6+ a good mouse, but not quite a great one. The cable is a disappointment, and the modular design is nifty but you are paying a lot for that functionality – so you’d better use it. The RGB lighting is largely blocked by the mouse’s side panels, and the software solution is fairly pedestrian – Mad Catz lack the breadth of ecosystem that something that a Razer, Logitech or SteelSeries can provide, where these programs can control multiple devices and are therefore worth keeping installed. With so many great wired mice available these days, it’s therefore hard to recommend the Bat 6+ unless you’re willing to pay a premium for the modularity and durability. I can totally see some people going for it, but my tastes are a little different.

More broadly, it will be interesting to see how Mad Catz continue to evolve their offerings. They’re caught between the desire to remake old designs with familiar features that their fans appreciate, and a more modern style that emphasises a lightweight design, flexible cables, and smoother, safer shapes. I think there is a way forward here – just swapping out the cable would improve the Bat 6+ immeasurably and it’s already at 86g in its lightest configuration – but it’s certainly a challenge the firm will have to navigate if it wants to return to its historical heights. 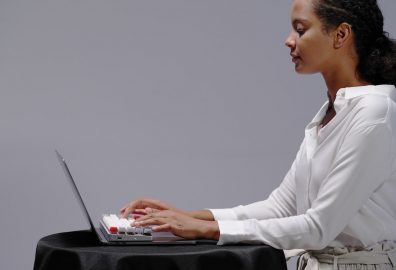 I have an affliction. Whenever I travel for work, I feel it necessary to bring along a mechanical keyboard...