The Packard Bell Dot S is a fairly vanilla-looking notebook in the traditional 10″ form factor.  One thing that sets it apart from the crowd is its colour scheme. On the model I received, the chassis was white with a dots-and-lines design on the cover, lower chassis and touchpad. The design reminds me of primary school writing paper, with two lines for your letters to go between and a dotted line in the middle to make it a bit easier. It’s an interesting aesthetic for sure, which can only be a good thing on such a plain platform as the netbook. 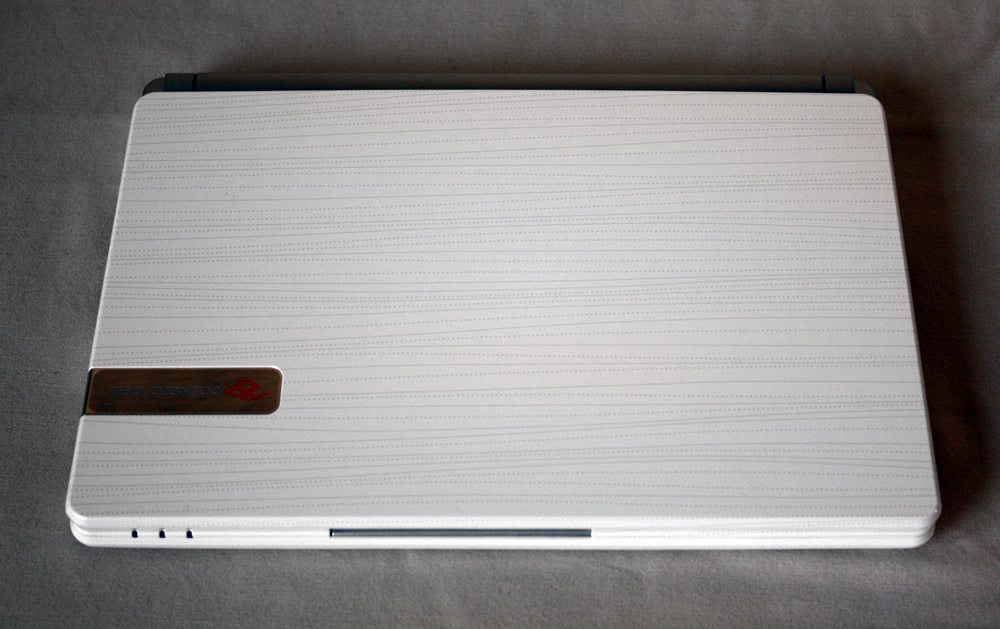 The bottom, however, is relatively unadorned. 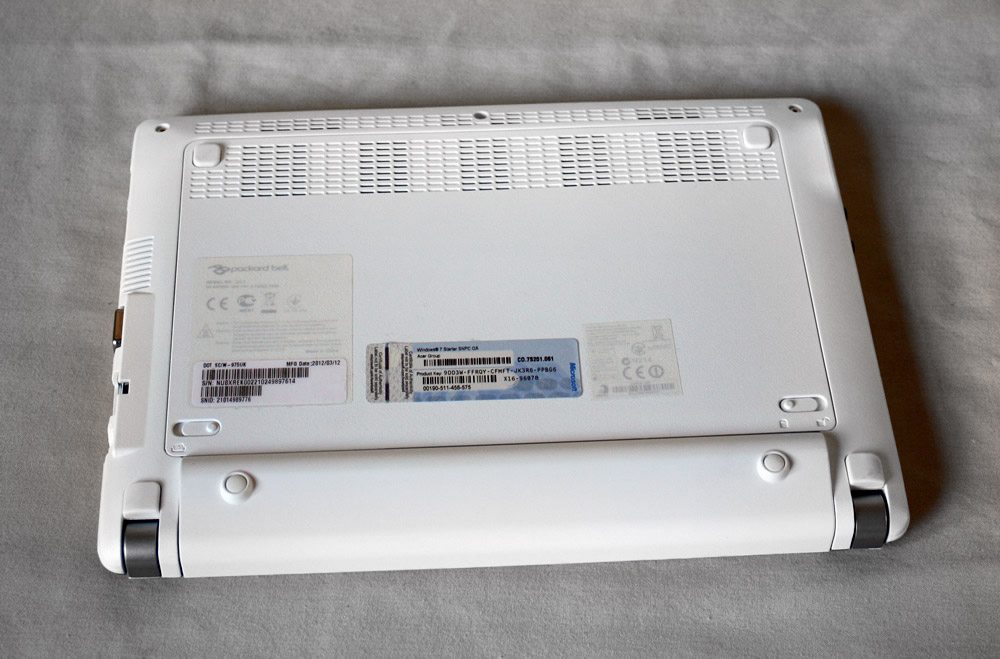 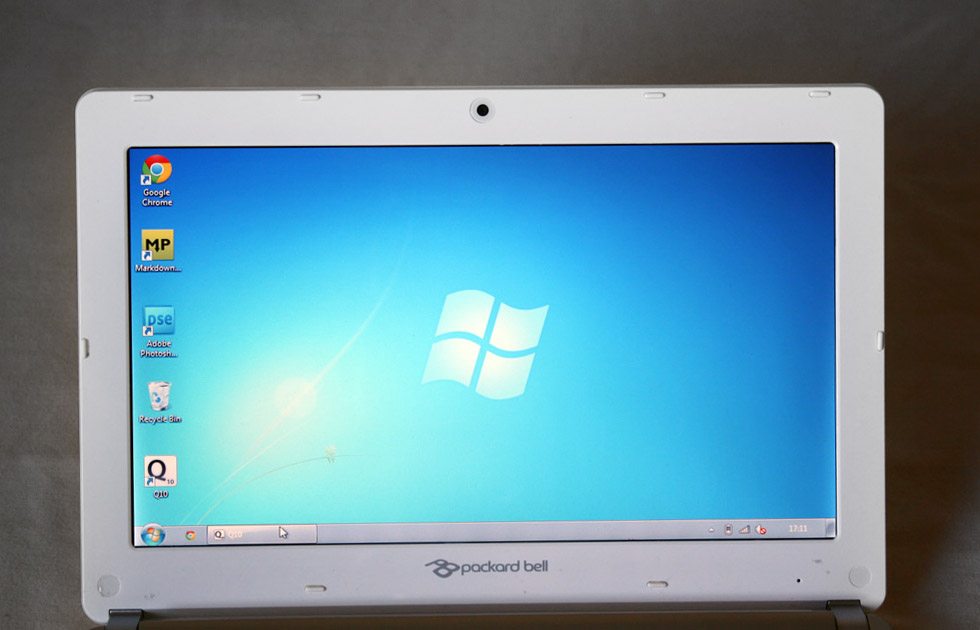 The right hand side features a Kensington lock port, two USB ports, microphone and headphone jacks and a 5-in-1 SD card slot. On board, there’s Wireless N (as well as A/B/G) but no Bluetooth. You can really tell this a late 2011 netbook by the inclusion of Wireless N and HDMI, and they’re most welcome upgrades over what was available just a few years ago. 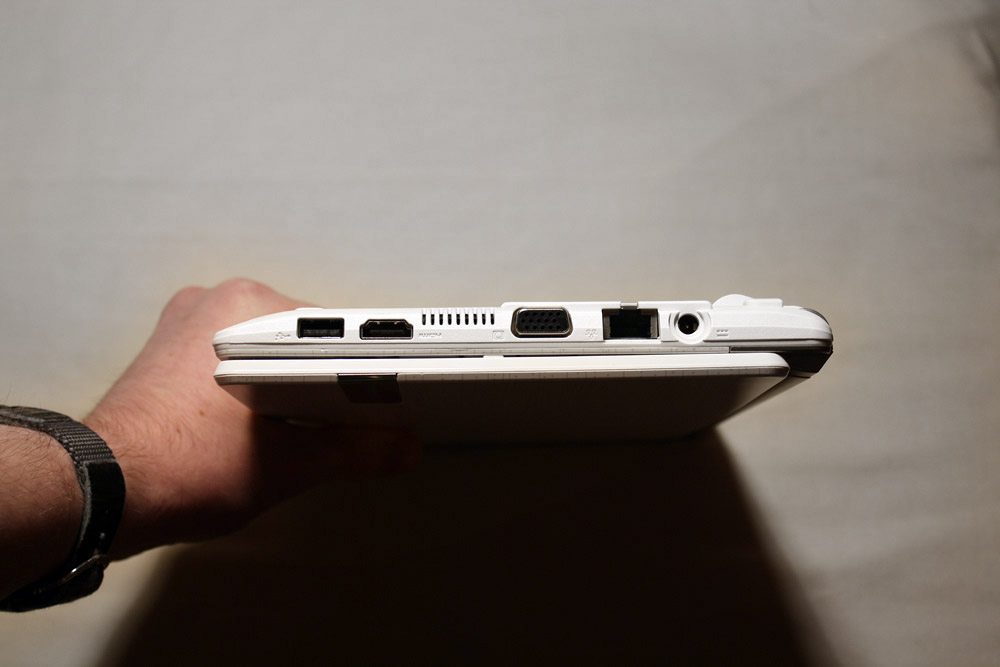 The Dot S uses a “Cedar Trail” Intel Atom N2600, a dual-core processor with hyper-threading that runs at 1.6 GHz. This is paired with 1 GB of DDR3 RAM running at 800 MHz. These Cedar Trail processors were released towards the end of 2011, and provide a dual-core solution at the same power usage as the old single-core CPUs, thanks to a smaller 32 nm process. The chipset also includes an Intel Graphics Media Accelerator 3600, which should be enough for 1080p video playback but didn’t work in all but the simplest games that I tried.

The Dot S includes a 320 GB hard drive at 5400 RPM. There’s a 285 GB partition for your OS, programs and media (of which Windows 7 takes up about 40) and a 13 GB recovery partition. A small-capacity SSD would no doubt perform wonders here, but of course that would also likely add a fairly considerable amount to the price. Still, an SSD would make a good after-market upgrade. 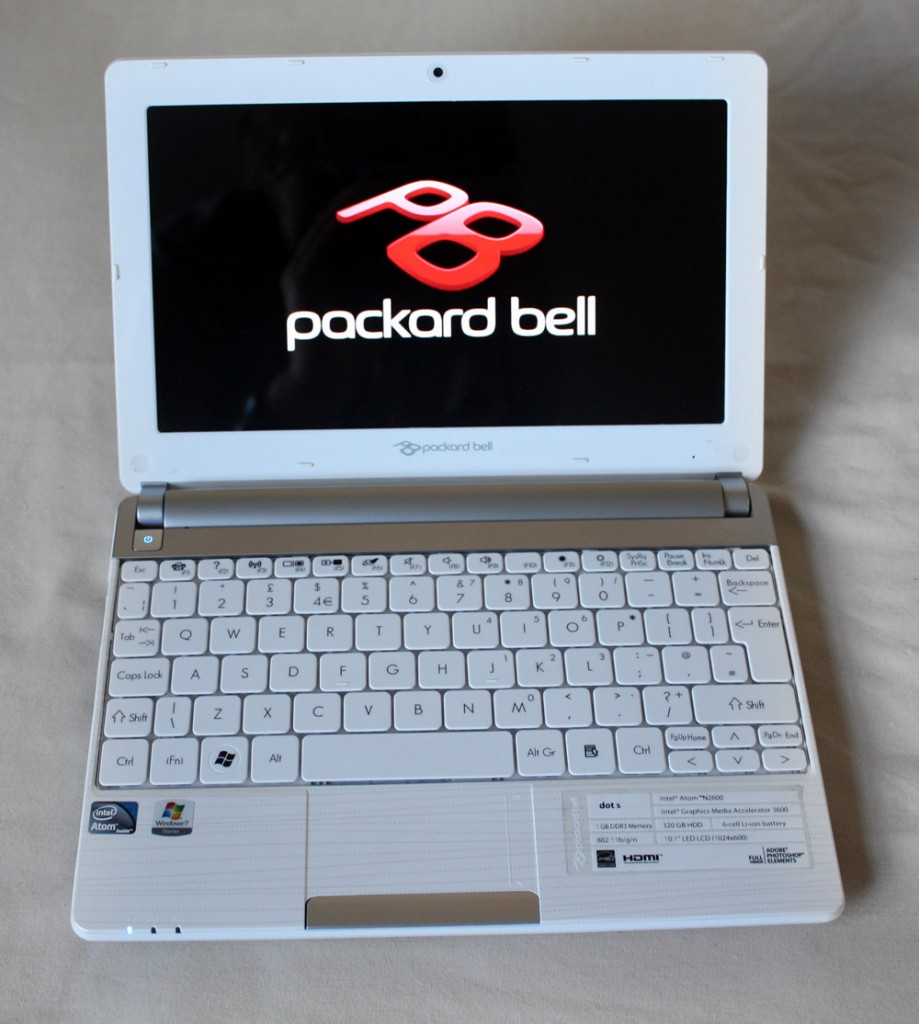 That 10″ display is the netbook standard size, 1024 x 600. I feel that this resolution is on the way out, but then again I felt that way a few years ago too. I recently used an Acer Aspire One with a 12″ 1366 x 768 display and it felt a lot better. Windows was built for resolutions of 768 pixels vertically, and I’d like to see more manufacturers moving to or beyond this measure. The display’s quality is again fairly typical, with decent colour reproduction and brightness, which is more than enough for a netbook. The display is quite glossy, which paired with the glossy and wide bezel makes for a highly reflective surface under office lighting. There’s a VGA megapixel webcam above the display.

The keyboard is only of middling quality. It manages not to commit any of the unforgivable sins of keyboard design, with close to full-size keys and a properly positioned Function key (between Ctrl and Win). The travel is a bit short, though, and that makes it a step below some netbook keyboards I’ve used. The key legends are also in a weird font, and some of the iconography is inconsistent (look at Shift and Enter / Backspace and you’ll see what I mean). Function keys take a back seat to things like media and volume controls, which is a sound decision unless you like to quit applications using Alt+F4. 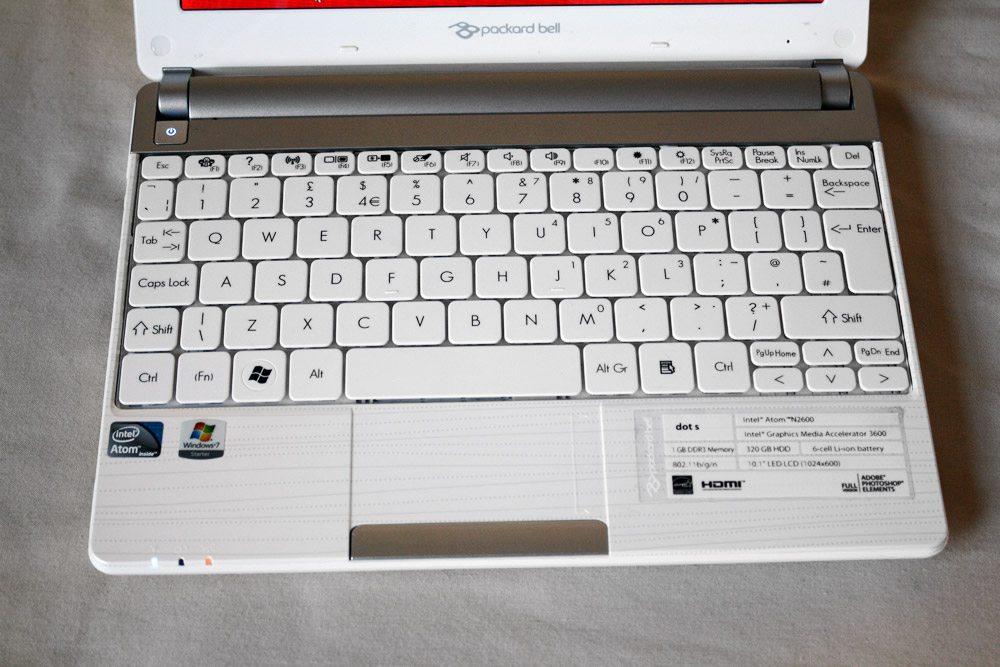 The touchpad is similarly acceptable, without being exceptional. The size of the touchpad and its positioning is good as I’ve found on a netbook, but scrolling is difficult (you need to be at the top left or bottom left to scroll, with a weird deadzone between the two regions). Multi-touch gestures are okay, with pinch to zoom and swiping working well if inconsistently.

Now that we’ve had a look at the netbook’s hardware, let’s now turn to its software.

The Packard Bell Dot S comes with a wide range of pre-installed crapware, as is sadly the norm these days. This particular configuration of crapware seems to be the same as I’ve recently found on an Acer Aspire One, and it does turn out that Acer does own Packard Bell and runs it as a consumer grade, low-end brand. The most egregious entrant is Norton Internet Security 2012, but none of it is particularly difficult to uninstall once Norton is gone. If you pick up this laptop, I’d recommend install Microsoft Security Essentials in its place, a surprisingly capable free piece of software that doesn’t try to sell you anything.

There is one good addition to the laptop that I didn’t uninstall: Adobe Photoshop Elements 9. The full version comes preinstalled and works much better than free image editors like Gimp, although it is still a ways behind professional-grade Photoshop CS6. You’re probably not doing much photo editing on a netbook’s 10″ display anyway, but it’s a nice addition.

The operating system of choice is Windows 7 Starter Edition. Beyond not including any of the added features found in Professional, Home Premium or Ultimate, Starter Edition also strips out the option to enable the 3D ‘Aero Glass’ desktop or change your wallpaper. It’s not much of a loss to be honest when you’re dealing with something of such limited graphical power; all in all you’re not much worse off than if it came with Home Premium and it’s a much better OS than XP or Vista. Of course, you can always upgrade directly from Starter to a higher version through Windows Anytime Upgrade if the need grabs you.

Now that we’ve had an initial look at the hardware and software, let’s move onto our testing.