Looking down now to the keyboard and touchpad, we’ve got the same arrangement that we saw on the 11.6″ S7 but with a bit more space to the left and right. There’s a few bits of branding around the keyboard that I wouldn’t mind losing (“Dolby Home Theater”, “Professionally Tuned”, “Intel Core i7 Inside”, “Aspire | S7”) but overall it’s much less busy than other Windows laptops, with naught else but the chiclet keyboard and a comfortably large trackpad beneath. 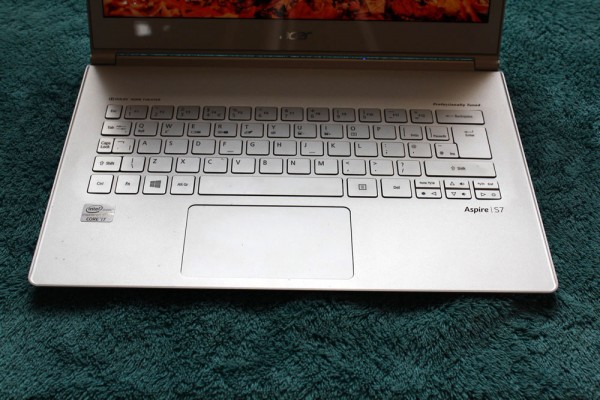 As I noted in the earlier review, there are a few oddities to the keyboard’s layout but in general it makes a lot of sense.

There’s a split Caps Lock key (which makes sense, given how infrequently the key is used) and a short set of cursor keys flanked with two keys that do double duty as Home/End and PageDown/PageUp respectively. The Backspace key, which was split between Backspace and Delete in the smaller variant, is here represented by two discrete keys – Backspace in the normal position in the upper right, and Delete to the right of the Spacebar and Menu keys.

There’s no function row, but you can access these keys if necessary by using the Function key which is in its proper place to the left of Control. Other Function commands are accessible via the the QWERTY row of the keyboard; these include turning off the display, switching to an external display, turning off the trackpad, muting and adjusting the backlighting. There’s even a key for rotating the display, which is useful if you have the display flat against the table and want to use it from the opposite side to the keyboard.

All in all, it’s a sensible arrangement that will take a bit of getting used to but shouldn’t cause any problems.

A potential worry is the keys themselves. Although they are quiet and attractive chiclet keys, the key travel is minimal. This makes typing a bit more difficult than on a more forgiving keyboard, as you have much less tactile feedback. While this is understandable due to the thin dimensions of the S7, it’s something to keep in mind. Except for the key travel issue, the keyboard is one of the better ones I’ve used on a laptop and I had no trouble gaming or writing this review on it.

The keyboard’s backlighting is also worth mentioning. It’s not quite as bright as what you’d find on a Macbook Pro, but I like that it gleams an attractive teal colour. As mentioned above, it’s adjustable via the keyboard itself and will otherwise react automatically to your environment.

As with the pre-production S7, I found the touchpad to be well constructed and be supported by good software. I did run into a few issues where I would accidentally trigger the zoom command on the earlier S7, but whether through actual improvements or my own increasing familiarity this wasn’t an issue this time around. The touchpad is definitely a good size, and doesn’t feel cramped at all.

The Aspire S7 looks fantastic, but how well does it perform? That’s what we’ll be looking in our next section, testing.