The Kingston KC600 is a new budget-friendly SSD, designed to offer performance at the very limit of the SATA 3 interface from capacities that range from 256GB all the way up to 2TB. The drive is rated to deliver up 550MB/s sequential read speeds, regardless of capacity, with write speeds improving from 500MB/s to 520MB/s when moving from the 256GB drive to its bigger brothers.

So, what is that attractive price we mentioned earlier? Well, the KC600 costs just £40 for a 256GB model in the UK, with 512GB and 1TB models available at £65 and £146, respectively. Note that while a 2TB model is mentioned, pricing for this isn’t available in the UK at present.

For the larger capacities, the drives are also available as kits, which include the drive plus cloning software, a 2.5-inch SATA USB 3.0 enclosure, a 3.5-inch bracket (and screws), SATA power and data cables and a 7mm to 9.5mm adapter. That’s a pretty impressive package, containing everything you could possibly need to make use of this drive! The kits cost a little more, as you’d expect, coming in at £79 and £162 for the 512GB and 1TB models, respectively.

The KC600 sounds promising and we have a 1TB drive with kit to test, so let’s not make Dave keep reading any longer and get right to the good stuff. 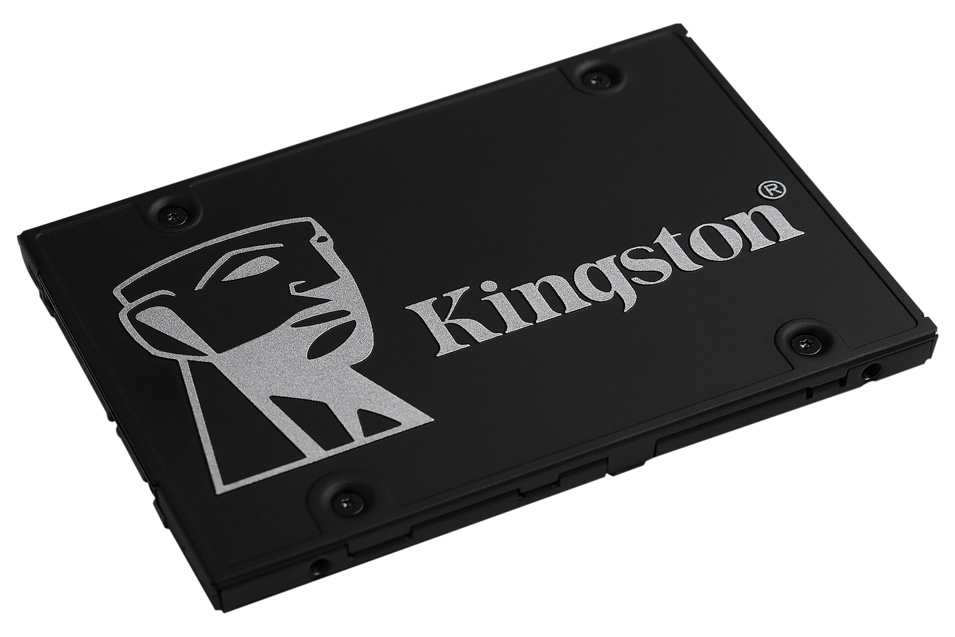 The KC600 has a pretty cool design, with a giant face (presumably that of Mr. Kingston, or perhaps an ancient idol responsible for the firm’s continued growth) and the Kingston wordmark embossed on the top of the drive in silver, standing in stark relief to the matte black body. The other side includes the SATA data and power connectors, plus a small sticker with the capacity and other important numbers. 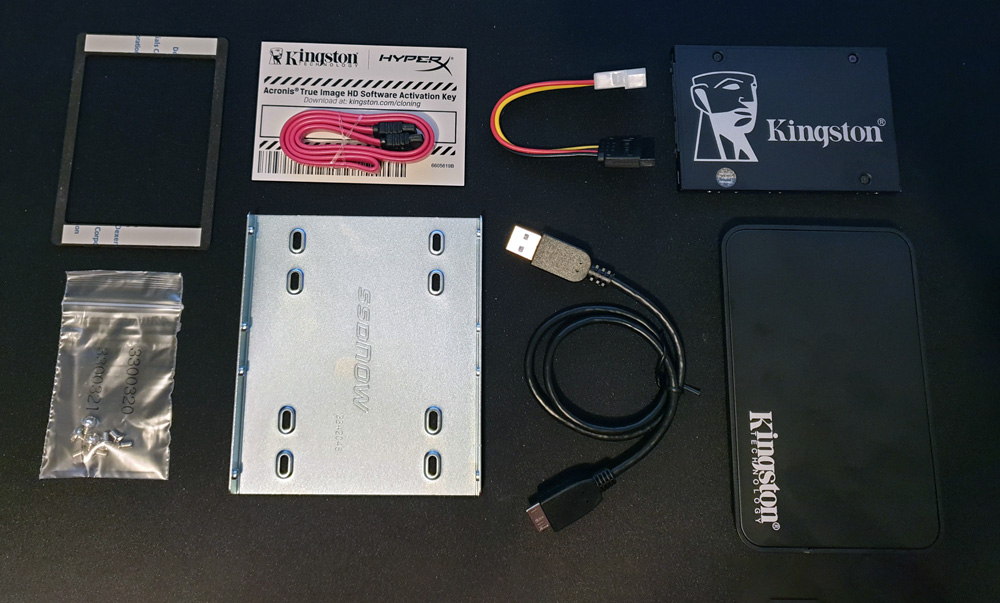 The rest of the kit also looks decent, with the USB enclosure feeling plasticky but solid enough in the hand (and sporting a lock!) and the steel 3.5-inch bracket looking the business. Given the relatively minor premium for the kit version, I’d say the depth of the extras here is remarkable.

Here’s how the KC600 1TB performed in our regular run of storage benchmarks, all tested on the XSR test rig – which is currently sporting a Ryzen 7 3700X, RTX 2080 and Aorus X570 Master motherboard.

CrystalDiskMark has been one of my favourite benchmarks for evaluating storage speeds for a while now, thanks to its varied incompressible workload and extremely readable results. We recently updated to version 6 of the benchmark, which unfortunately means that we have a limited pool of results to use here. Therefore, this test should show predominantly whether the drive lives up to its claims for sequential write performance, as well as providing some insight into the KC600’s random access capabilities.

The KC600 performs well below the NVMe drives we’ve tested in 2019, but manages to hit right up against the 550MB/s barrier for the SATA 3 interface it uses. That’s a good sign for sure, and the remaining read results are strong as well, with the relatively high queue depth result showing performance in the same order of magnitude as the NVMe drives in the chart. Write speeds are less exciting, with a 476MB/s sequential result that falls some way below the 520MB/s advertised.

By comparison, the fastest SATA SSD we tested in an earlier version of the benchmark – version 3 – recorded a sequential read speed of 522MB/s and a sequential write speed of 470MB/s, showing the KC600 is impressive in its read speeds and consistent with other top performing SATA drives when it comes to writes. 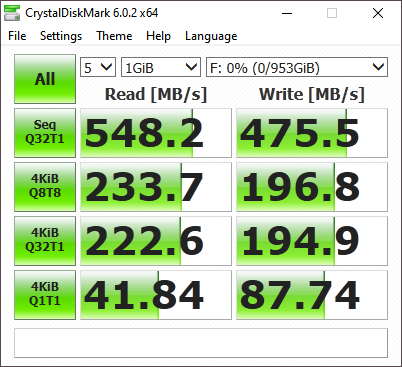 AS SSD is another benchmarking tool quite similar to CrystalDiskMark, which uses predominantly incompressible data across a range of workloads including sequential tests, random performance and access times. First three numbers are MB/s and access time is in ms. We’ve got much more points of reference here!

The KC600 does pretty well, but in heavily-threaded scenarios it falls down compared to some drives in our tests, such as the Toshiba A100. 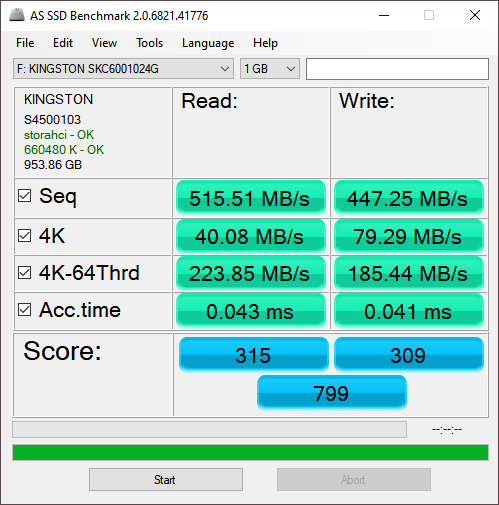 Indeed, you can see that the KC600 is slower at small chunk sizes, representing random reads and writes, but speeds up considerably once chunk sizes reach around 256KB. The A100 remains faster, but the KC600 is still quite competitive. 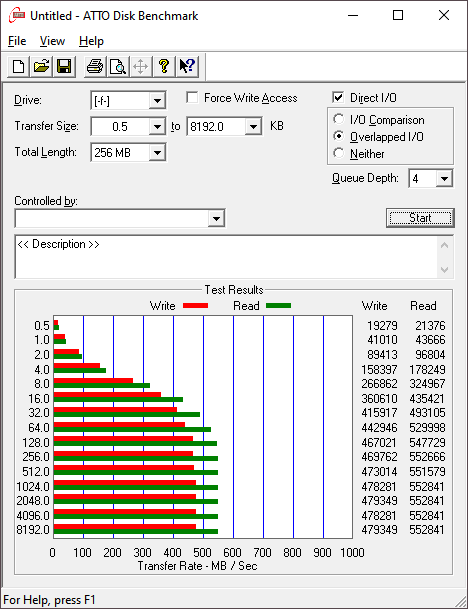 The KC600 performs excellently in HD Tune, with one of the highest average speeds we’ve recorded and a solid burst rate as well. 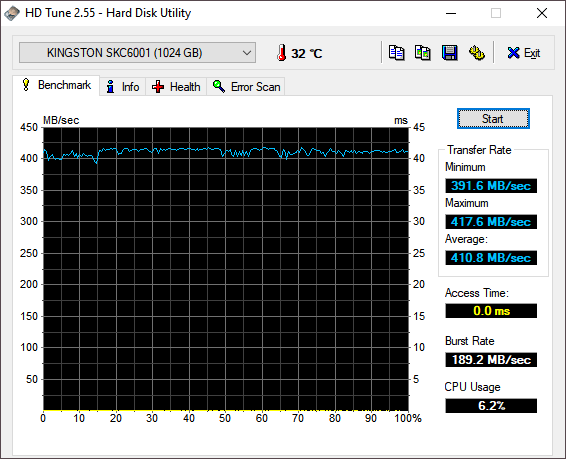 The Kingston KC600 is a medium to fast SATA SSD, offering strong sequential performance and middling speeds when it comes to random I/O. This makes it more than fast enough for most people, and makes a good choice if it’s competitive on price. The kit version is also worth considering, as it packs in useful extras like software and a drive enclosure at a very reasonable premium. 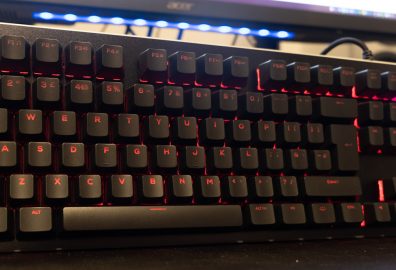 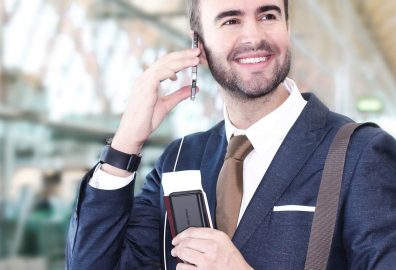 For the past few days I’ve been charging my smartphone, headphones and Switch with a single portable...