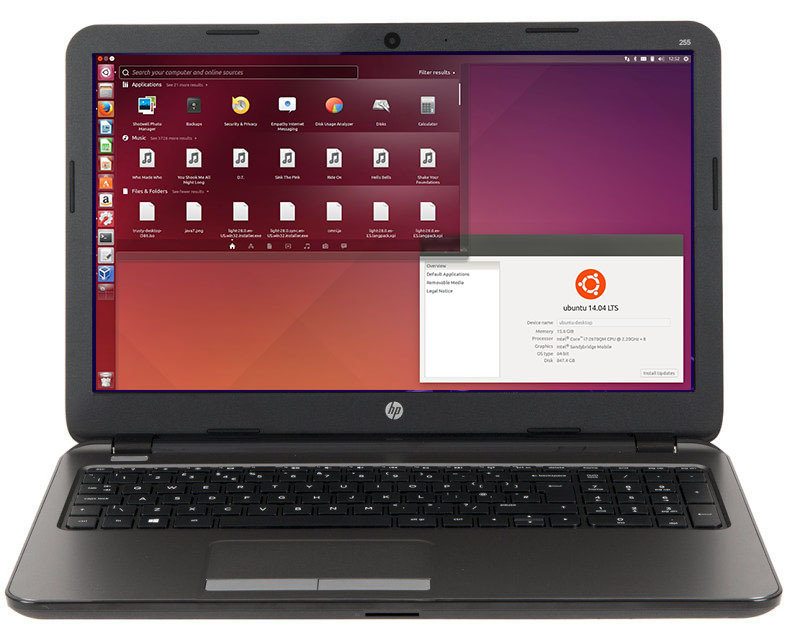 The HP255 G3 is a low-cost AMD-powered laptop, provided this time with Ubuntu Linux from Ebuyer. It’s rare to see a 15.6-inch laptop with a quad-core processor for such a low price, but does the rest of the package measure up? Is Linux a reasonable substitute for Windows? Let’s find out!

The 255 G3 is exactly as it appears: an inexpensive HP laptop. That means you can expect the normal HP flourishes – a grey base surrounding a black island-style keyboard, HP logos below the display and on the lid – but an overall utilitarian design made from slightly rough-feeling plastic. There’s plenty of flex evident in the lid, but the main chassis feels pretty durable. For its £200 price point, it’s a reasonable level of fit and finish. 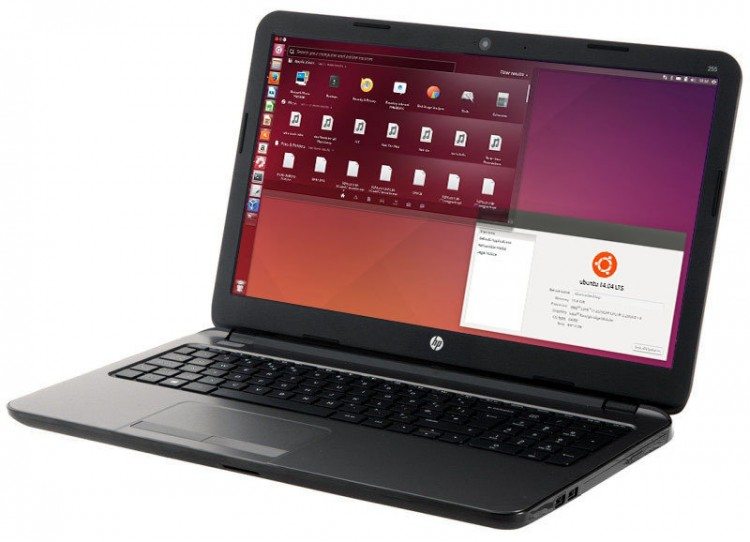 The display is that damnable 1366 x 768 resolution; large enough to be usable but pixels are clearly visible and text is harder to read than higher DPI displays. While the resolution is disappointing, the rest of the screen displays (heh) good qualities: reasonable side-to-side viewing angles and decent colours too.

The input options available were surprisingly good, with the large touchpad proving accurate and responsive. The keyboard was a bit shallow, but the keys were well spaced and the Fn key is in the correct position (2nd from the left, rather taking Ctrl’s place). The inclusion of a numberpad will also be a welcome sight for anyone working on their taxes. 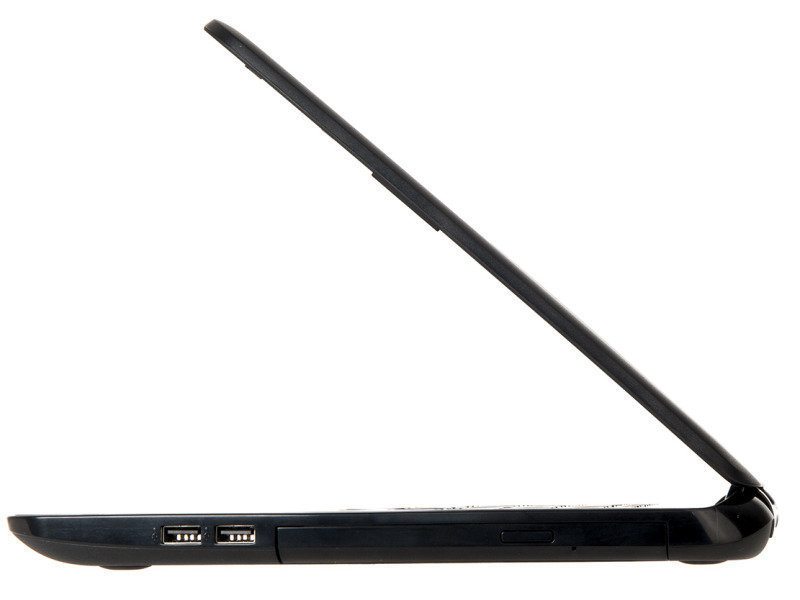 Finally, there are a good selection of available ports: two USB ports on the right with a DVD-RW drive, then one more USB, VGA, HDMI, headphones and gigabit ethernet on the left. You might initially think there’s no SD card slot, but it’s actually below the touchpad, front and centre.

Running Linux, the 255 G3 is nicely immune from our normal battery of benchmarks and tests. Instead, we chose to simply use it for a range of activities, from image editing to web browsing and article writing (guess what we wrote!).

In general, the 255 G3 was a little sluggish. It’s been a while since I’ve used a truly budget laptop, and to start I often thought it hadn’t registered a button press when it was really just still working on it. Once you gain that understanding though, the performance was not too bad for the basics.

Navigating heavy sites (The Verge, cough cough) was a nightmare, but other websites were fine if you allowed them extra time to load. Simple image editing via the unfortunately named GIMP was straightforward enough, and I even managed to play a few Linux-themed Linux games from the Ubuntu Software Centre. Battery life was also OK, lasting around five hours of mixed use.

Performance issues aside, the laptop was reasonable. The keyboard and touchpad made writing articles a pleasant experience, and although the laptop took up a lot of my bag it was still portable enough to take to work and back without issue. Still, using it on the train was a challenge: 15.6 inches is wider than I remembered. It’s definitely café- and table-compatible though, and that’s the important thing. 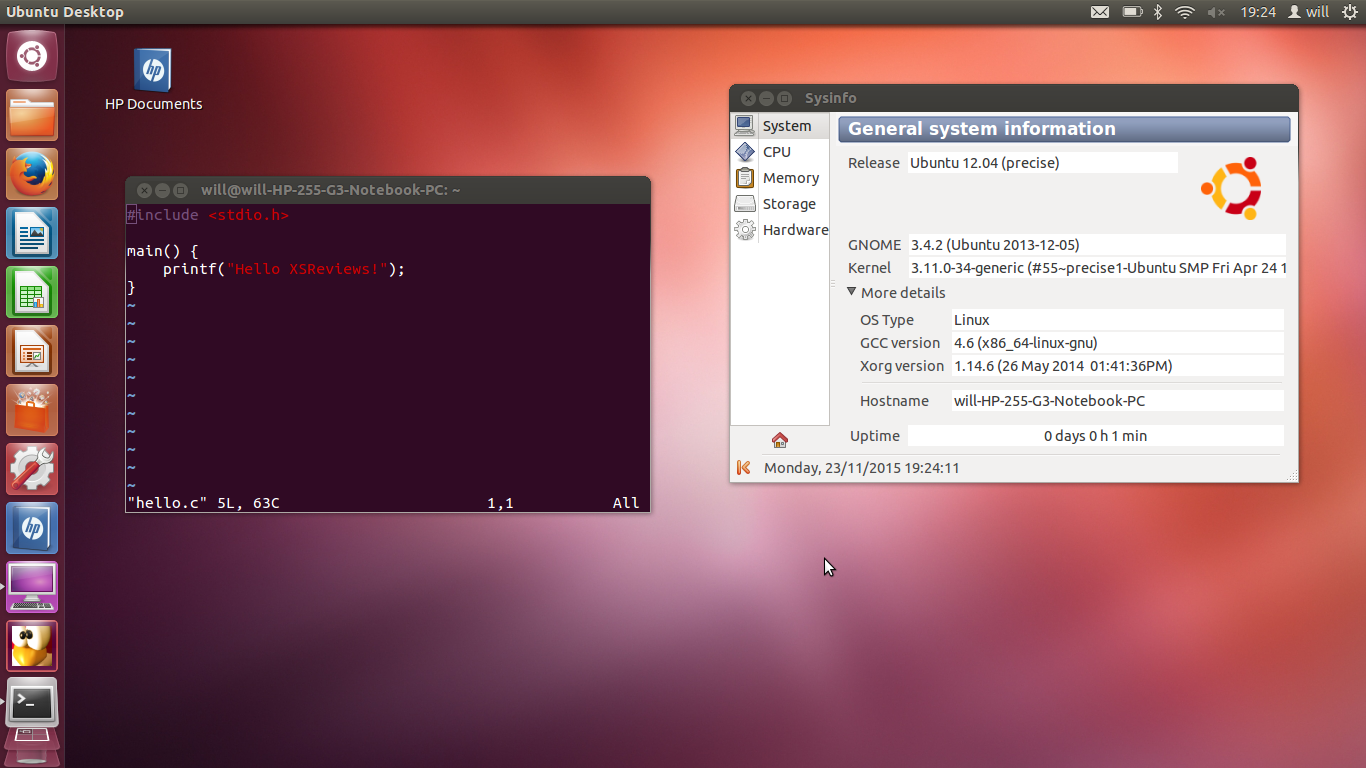 It’s been a while since I’ve used Ubuntu (or indeed Linux in general), but the OS seems to have only become more user-friendly in my absence. Installing new software from the Ubuntu store is simple, updates only wrecked the laptop once, and generally things worked as I expected.

If you’re new to Linux then you may experience a few rage-worthy moments getting things sorted, but thankfully Ubuntu has a large community of helpful users that make things as painless as possible. All the programs that you’d likely run on a low-end machine are available here (or at least equivalents thereof), and so choosing Ubuntu over Windows isn’t a terrible idea. Of course, if you have a spare Windows 7 or 8 license then you can install that on the laptop instead (and presumably upgrade to Windows 10 later).

The 255 G3 makes sensible sacrifices in performance and display to hit a low price point without taking away too much. While Ubuntu Linux may not be your first choice, it’s a viable alternative to Windows and a efficient partner to the 255 G3. All in all, I liked using the 255 G3 more than I expected and I’ll be a little sad to see it go.

Today we’re looking that the Speedlink Kudos Z-9, a budget gaming mouse available on . Despite its low...

Today we’re looking at a mid-range gaming laptop from Gigabyte. It’s the P55K v4, and it offers a...