Before the world dared to dream of photorealistic cars lapping around laser-mapped tracks, racing games were an altogether different breed. The limited computing power of the 90s meant that the best-looking games often relied on clever tricks to fake graphical fidelity, rather than merely throwing as many polygons on screen as possible and calling it a day.

A typical example was Top Gear, a series of racing games for the Super Nintendo, Sega Genesis and Amiga (and no relation to the shouty television man). The track was rendered just metres ahead of the player, with twisty tracks, colourful backdrops and plenty of action disguising the limited draw distance. It proved to be a winning formula, particularly in Brazil where pirated copies were commonplace. 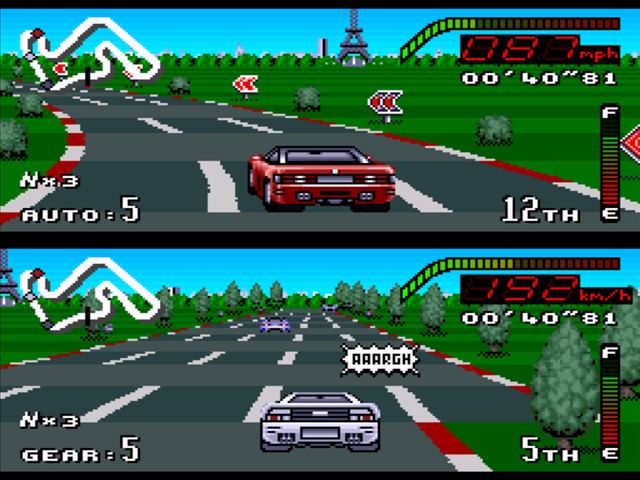 Twenty-three years after the release of Top Gear, Brazilian studio Aquiris released its take on this now retro formula: Horizon Chase. This Android and iOS title retained the globe-trotting tracks and retro gameplay of its predecessor, but brought it shiny and chrome into the new world of mobile gaming. And now, three years after Horizon Chase debuted, a full-fat sequel for the PC and PS4 has appeared: Horizon Chase Turbo. I’ve been playing it since launch; here’s what I think. 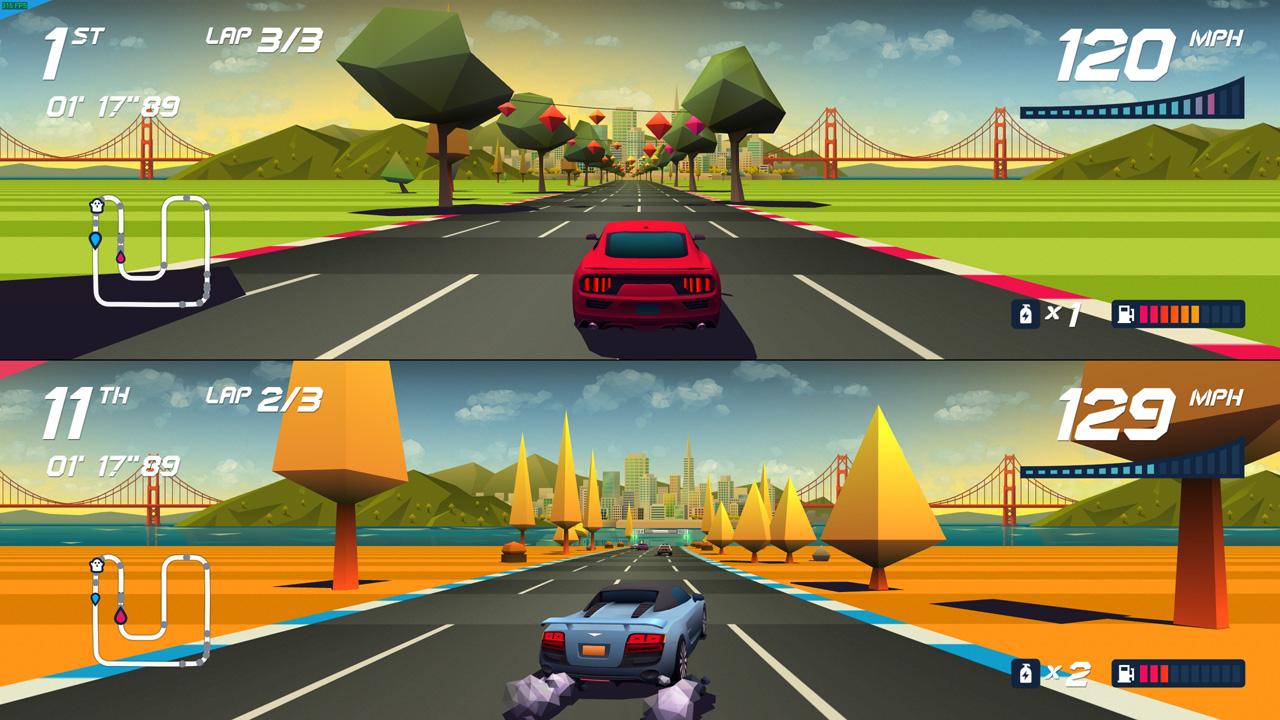 It’s hard to talk about anything in Horizon Chase Turbo without remarking on its retro stylings. The entire experience — simple yet iconic automobiles, lush tracks that span the world and change with weather, frenetic soundtrack — comes together to provide an experience that’s just plain fun.

Nailing just one of these elements would have been a challenge, but the synergistic effect of hitting all three puts this game over the top. The simplistic models and clean interface, indicators of the game’s mobile lineage, also serve to fit the retro theme. 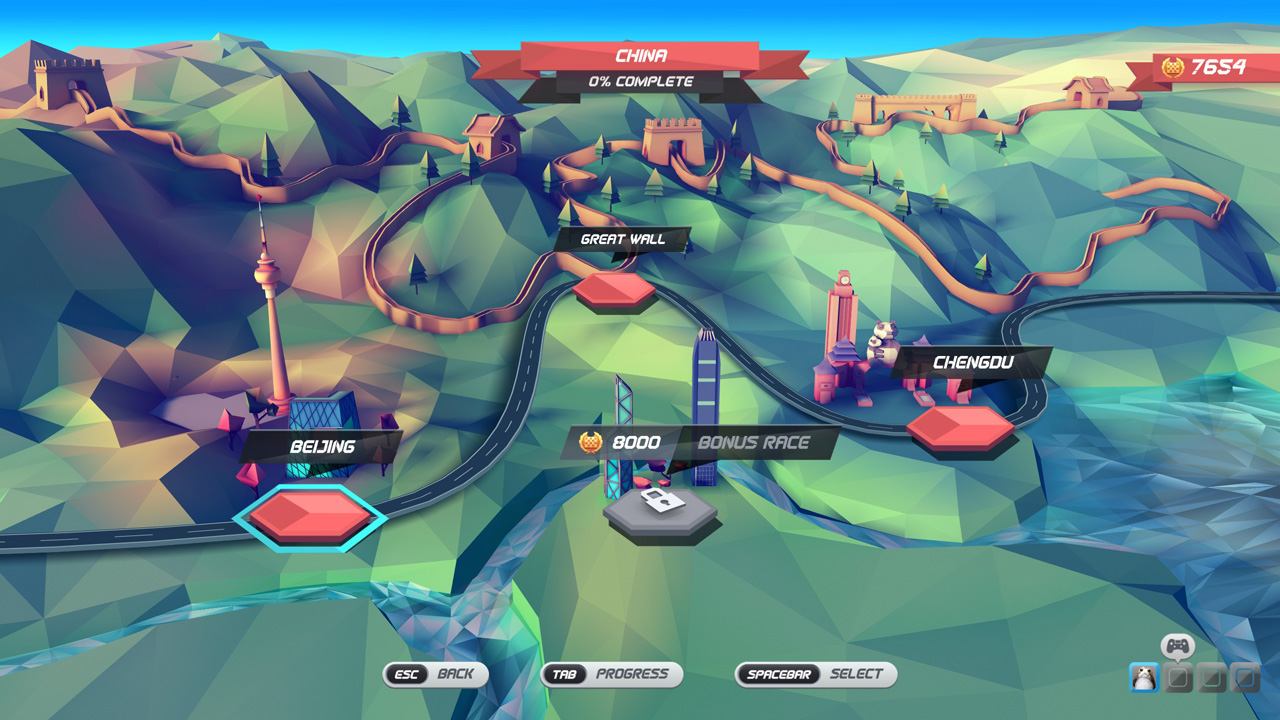 Seeing the track recede into the distance while you’re bouncing around corners and screaming down hills is pure joy. Even the arcade gameplay of these classic games is maintained, with boosts to push you past enemies at super sonic speeds, fuel to keep your motor ticking and collectables to help you earn new cars. Rather than testing your ability to hit braking points and apexes, succeeding in Horizon Chase Turbo is all about dodging the other drivers as you rocket inexorably down the track. 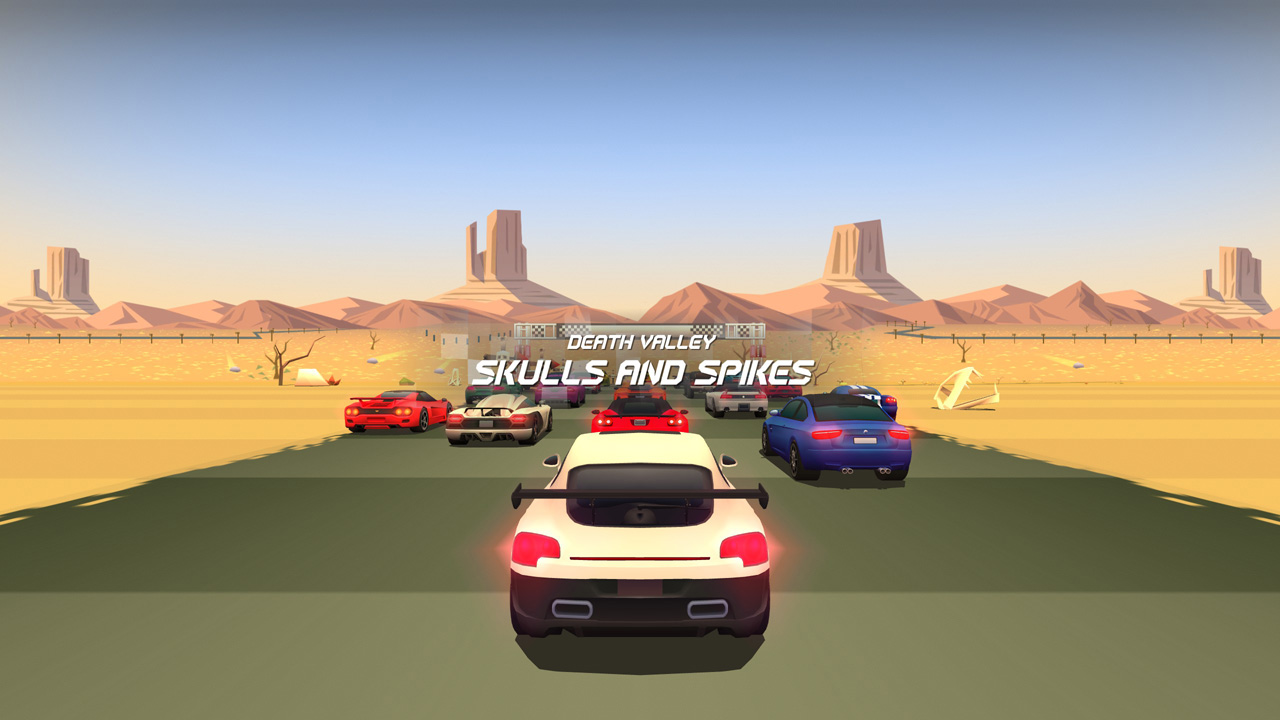 The cars in this game are also perfectly chosen, each an iconic design that clues you into exactly what it will be like to drive, even if it lacks the proper brand name. Spying a new car on the starting grid, or welcoming your latest collection to your garage, is a joyous celebration. And because upgrades apply to each of your vehicles, you can keep driving your favourite motor without worrying too much about its stats — it’ll probably be good enough for all but the hardest levels. 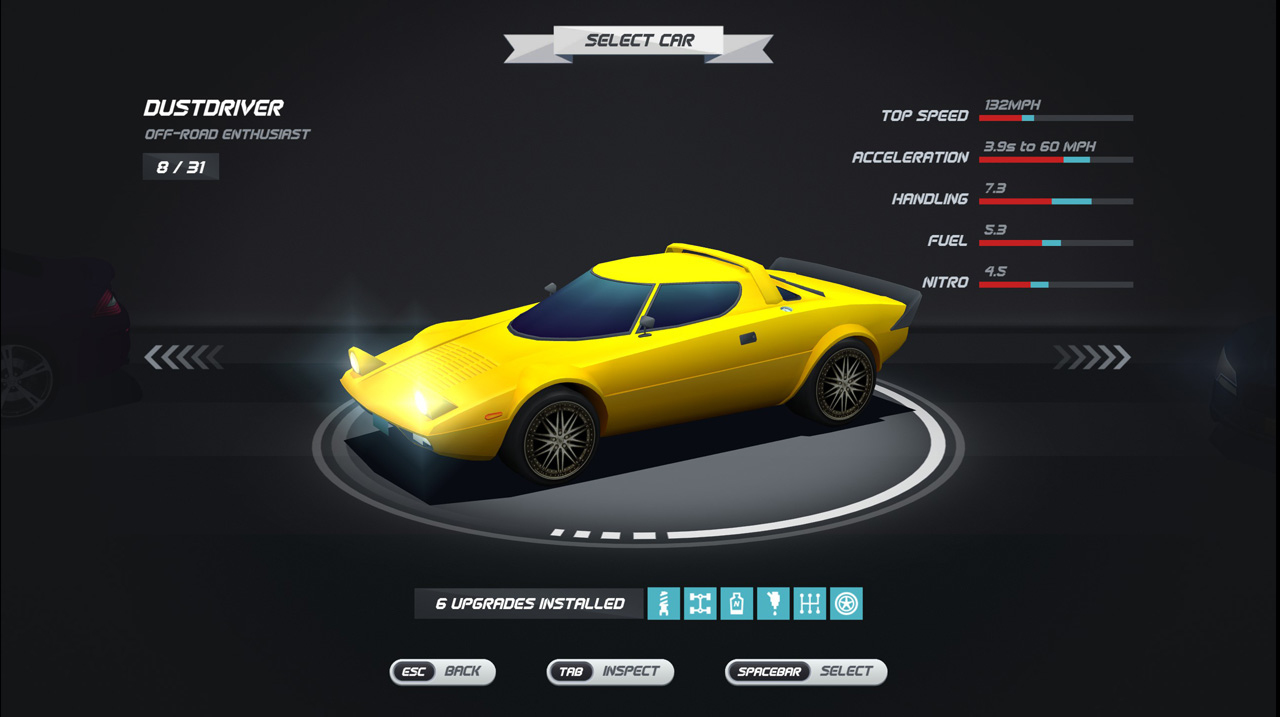 Like Top Gear 2, Horizon Chase Turbo takes you on a World Tour as its main campaign mode, with each new location bringing new tracks, new visuals and often new tunes or weather effects as well. The simpler tracks of festive Brazil give way to the windy wastelands of snowy Iceland; the starting location of California includes the redwoods of Sequoia National Park, the crimson arches of the Golden Gate Bridge and the heat of Death Valley. Wherever you go, there’s a landmark to be recognised, an atmosphere to immerse yourself in. 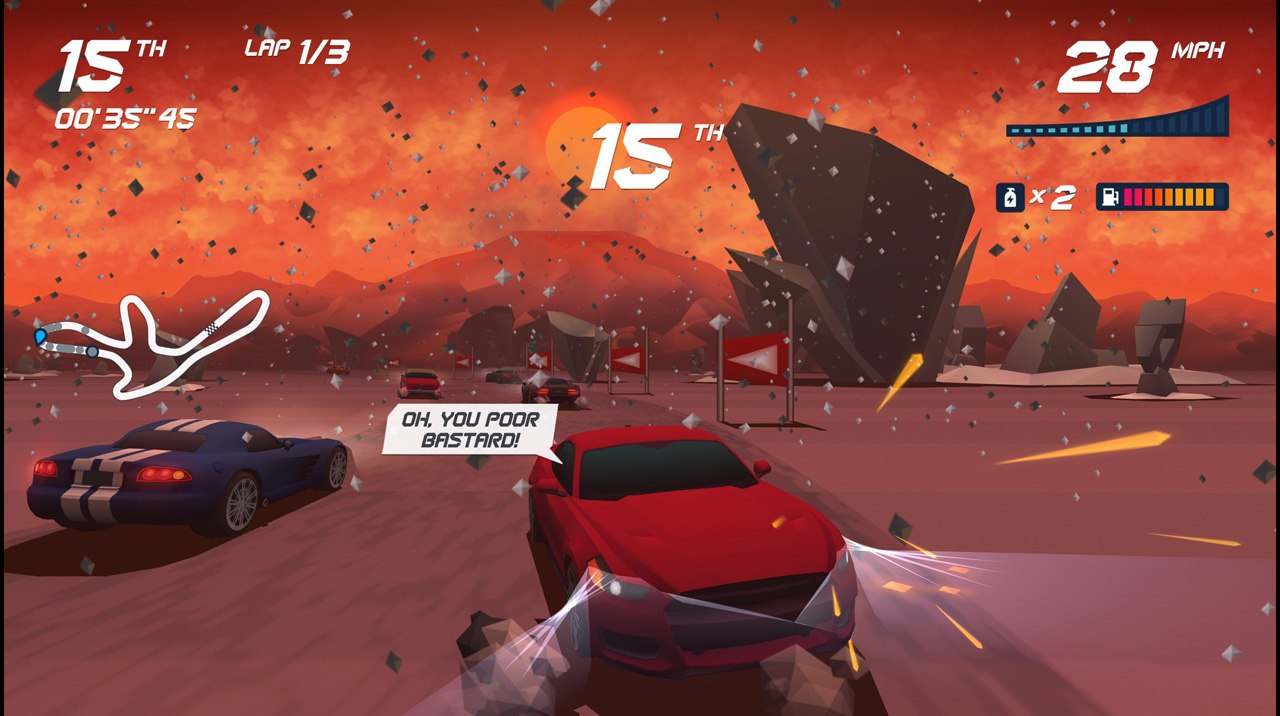 While Horizon Chase Turbo is wonderful in many ways, it can also be frustrating. Often, it seems that victory is more about luck than skill; getting an inadvertent boost from a CPU-controlled driver smashing into you from behind can be the difference between victory and defeat.

Particularly on the narrower tracks, there often isn’t enough space to pass comfortably, so you have to either go for it and restart the race when you inevitably run into the back of someone, or play it cautiously and risk the leader disappearing into the distance. Your AI opponents also seem to lack much of a sense of danger, and they’re perfectly happy to edge into you repeatedly until you run out of track. 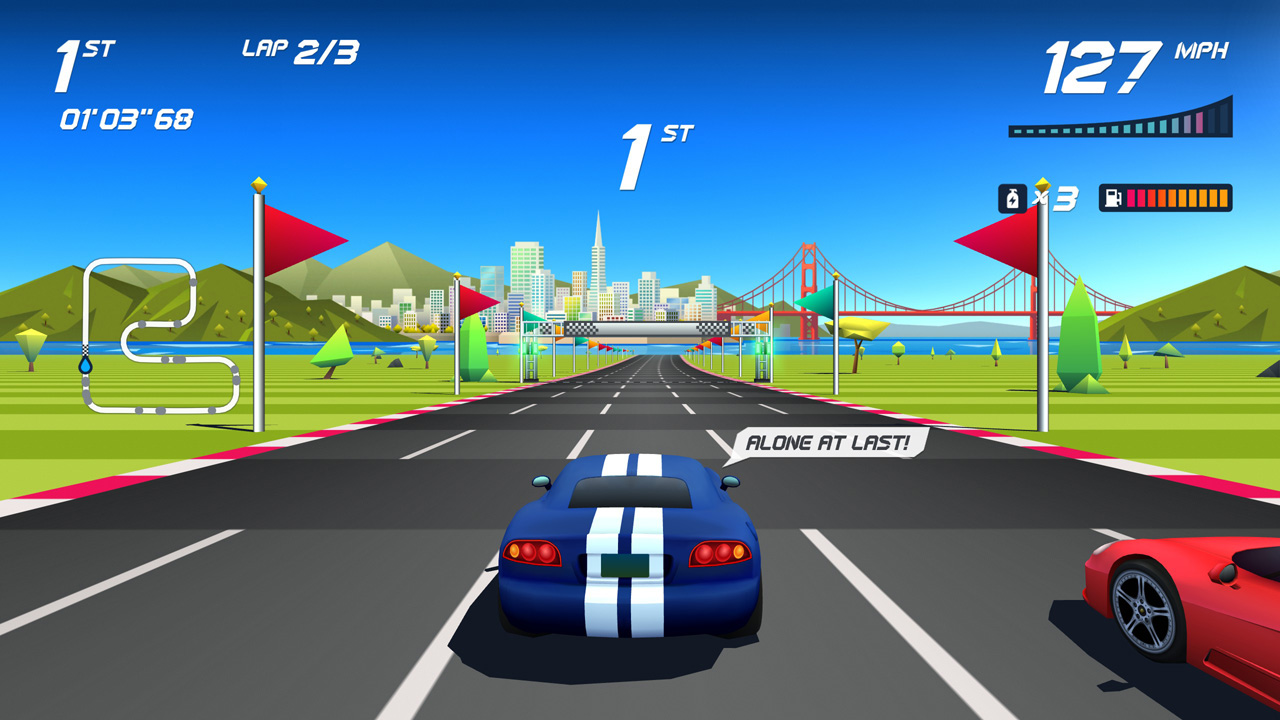 Curiously though, while the leading cars tend to disappear promptly at the beginning of the race, they often slow down towards the end. I’ve had races where I’ve been struggling to even keep up with a distant foe, let alone make up ground, but as the last lap rolls around, they’ll slow to a relative crawl and allow me to speed past with nary a peep of a challenge.

This rubber-banding is an understandable way to keep the races exciting, but I do think it could be tweaked a bit — what if the leading drivers were less fast in the beginning, but a bit faster later on?

Similarly, once you’re into first place, the challenge basically disappears — no matter how fast and aggressive your opponent was in the first few laps, they seem to lack the capacity to ever mount a comeback. If you pass the leader with a lap or two to go, then that results in a pretty anticlimactic conclusion. 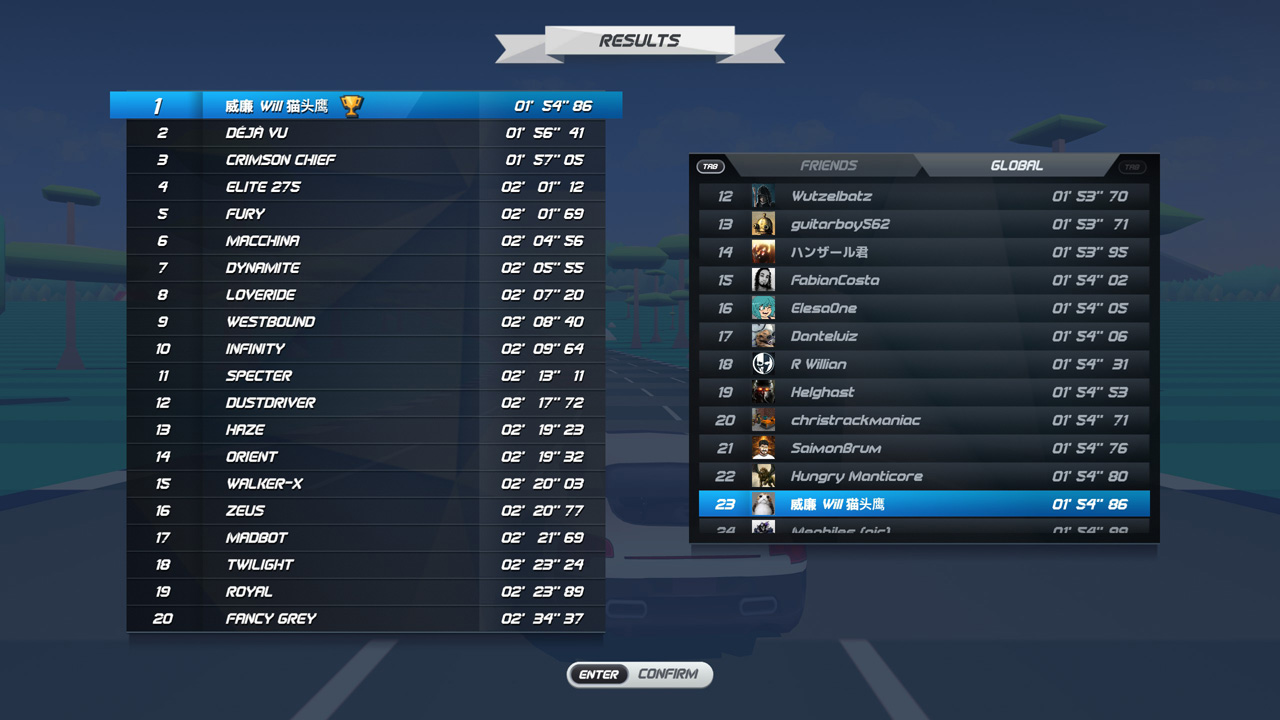 Another bit of wasted opportunity are the leaderboards. Upgrades throughout the campaign ensure that all of your cars become faster the farther you progress, so inevitably all of the fifty fastest times come from those that returned to tracks with maxed out cars. It would be better if you were just competing against those with an equal level of upgrades, or in the same vehicle.

I also saw some pretty incredible times, even accounting for end-game vehicles and upgrades, such as a ten lap race that was finished in forty seconds. I don’t see how it would ever be possible to lap in four seconds, given the amount of traffic on the field, so I can only surmise that, much like other titles, some of the better records are perhaps illegitimate. If the leaderboards were refined, I’d be much more motivated to go back to races I enjoyed to try and set a good time. 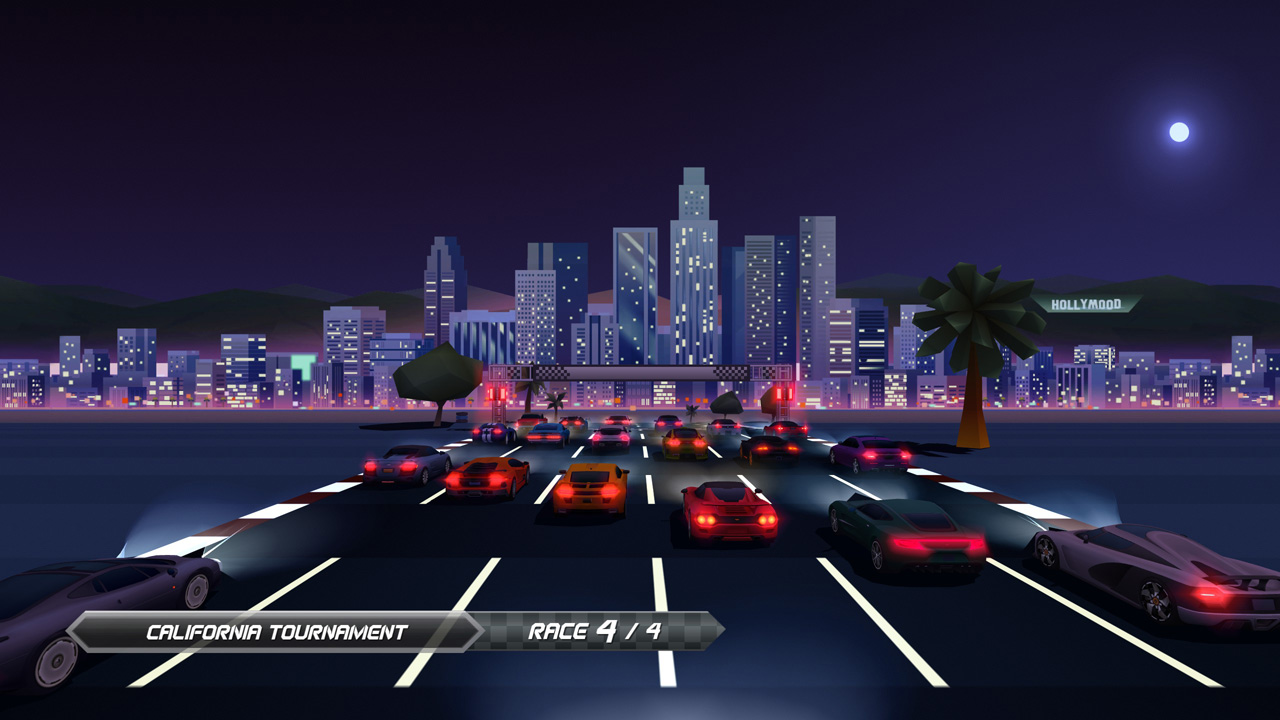 If you’re a fan of Top Gear and other retro games of its era, then you owe it to yourself to check out Horizon Chase Turbo. The game is a love letter to racing games as they used to be, a letter that I want to read again and again. Every time I hear its searing soundtrack, all electric guitars and bleeps and bloops, I’m back in that exciting time when arcade racing really was the forefront of video gaming… and it’s absolutely brilliant.

Get on Steam
£15
racing retro Steam 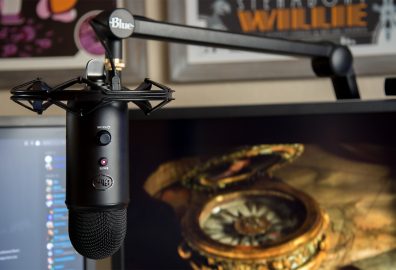 The love that streamers and podcasters have for Blue microphones is self-evident. We’ve even had the... 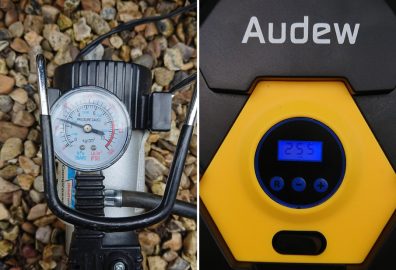 It’s important to keep your tires at the correct pressure, but checking them and pumping them up can be...