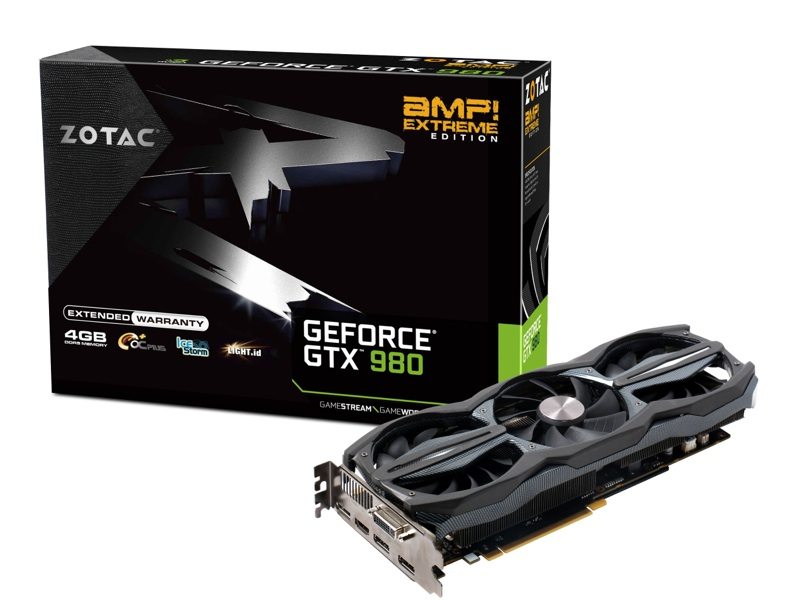 Today I’m testing Zotac’s Nvidia GTX 980 Amp! Extreme Edition, one of the most powerful graphics cards on the market right now. If you are into graphics and want to know more info, this is for you too. Zotac have a strong history of producing excellent aftermarket graphics cards, so I’m excited to see what this card is capable of. Let’s get started!

The Zotac GTX 980 comes in a slick cardboard box, with some shiny metal on the front, the various stats and features, and Zotac’s customary orange branding. 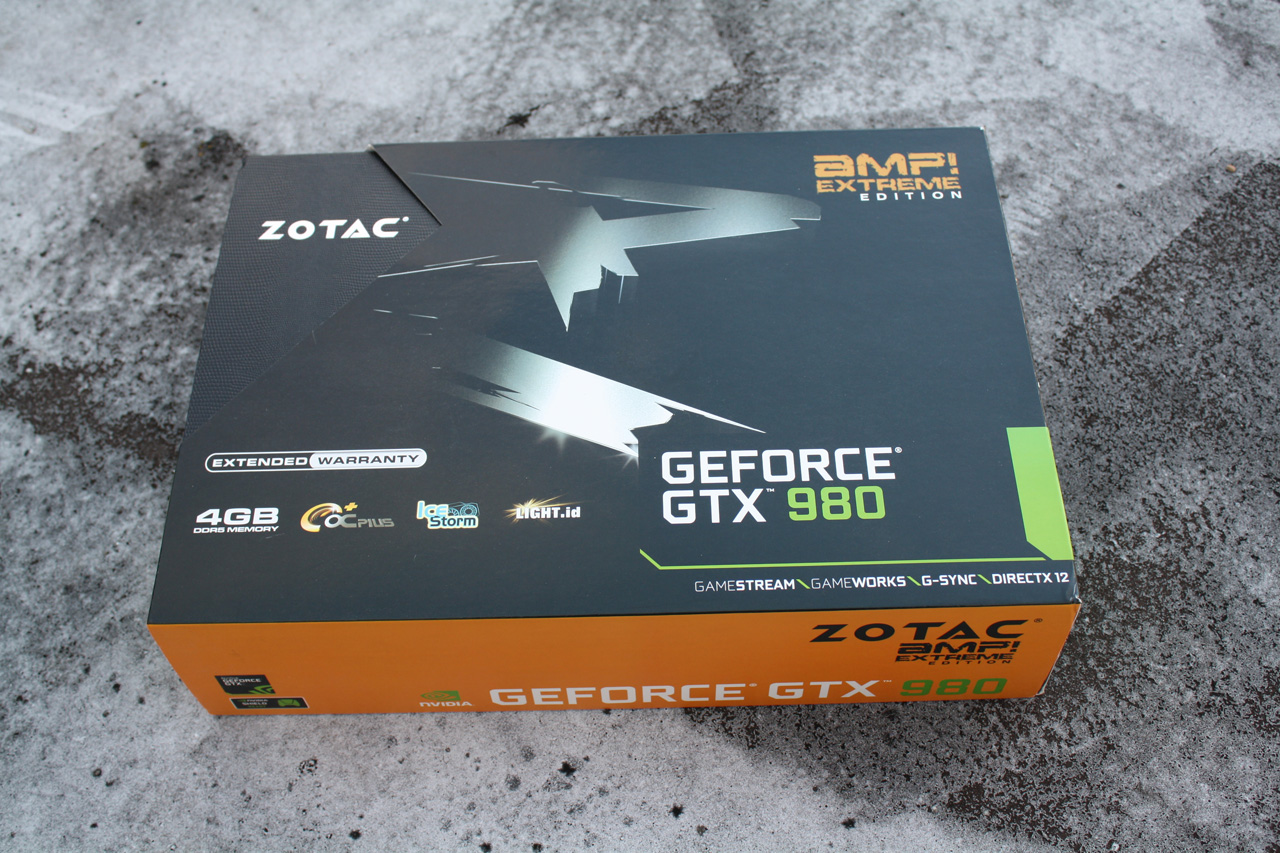 On the back, we have more features and a diagram showing the ports available. There’s a lot to read here, should you find yourself in a store with this card. 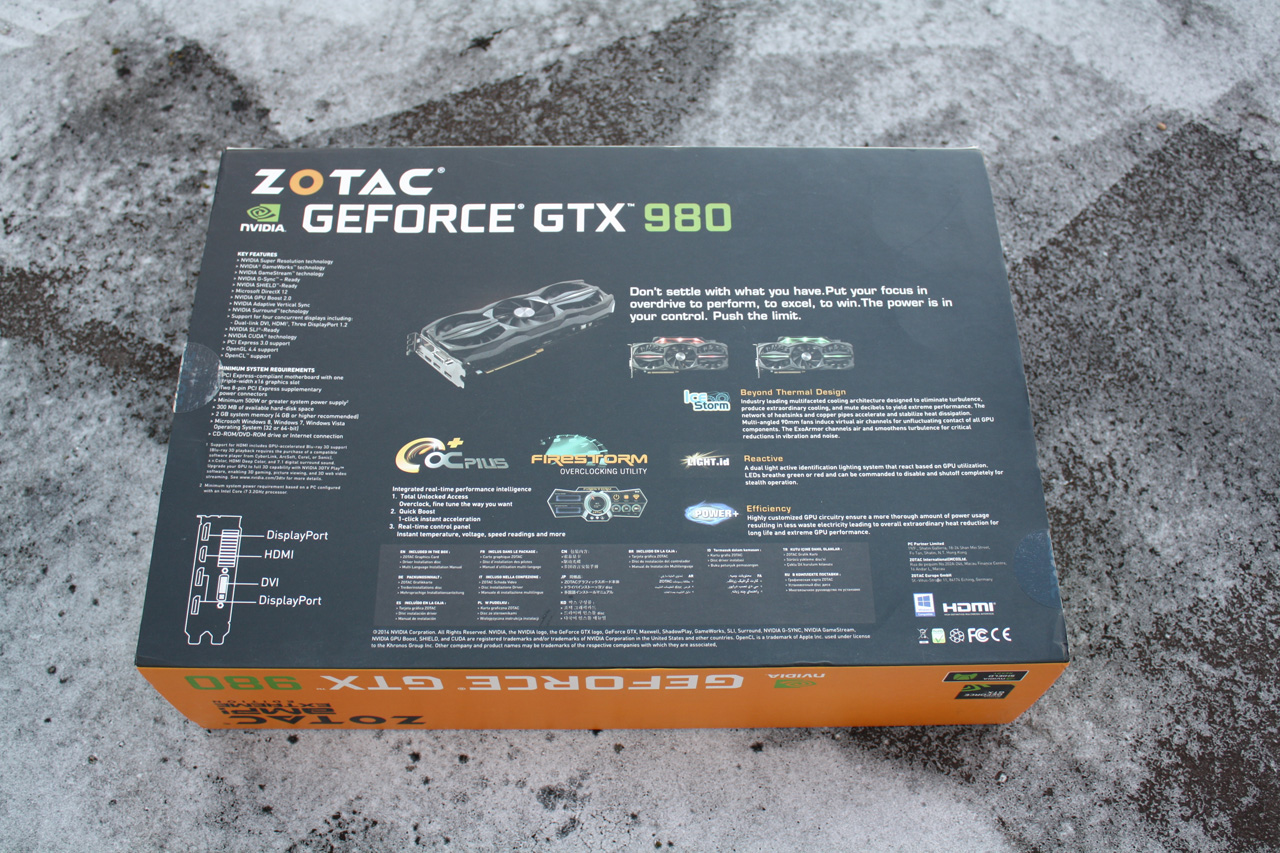 Take off the sleeve, and we have a classy black box with a fine texture. 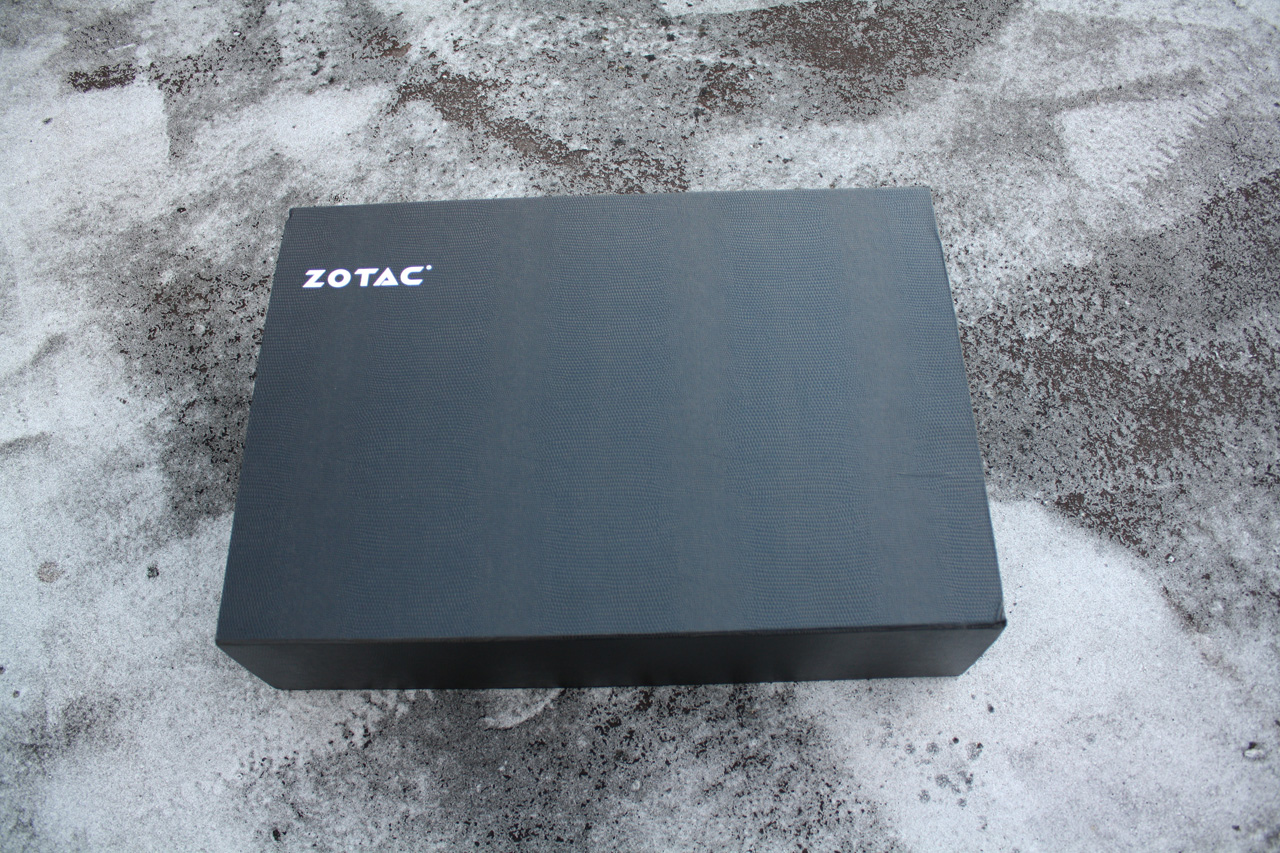 Open the box, and we have the graphics card nicely wrapped in a static-proof bag and well armoured with plenty of foam. 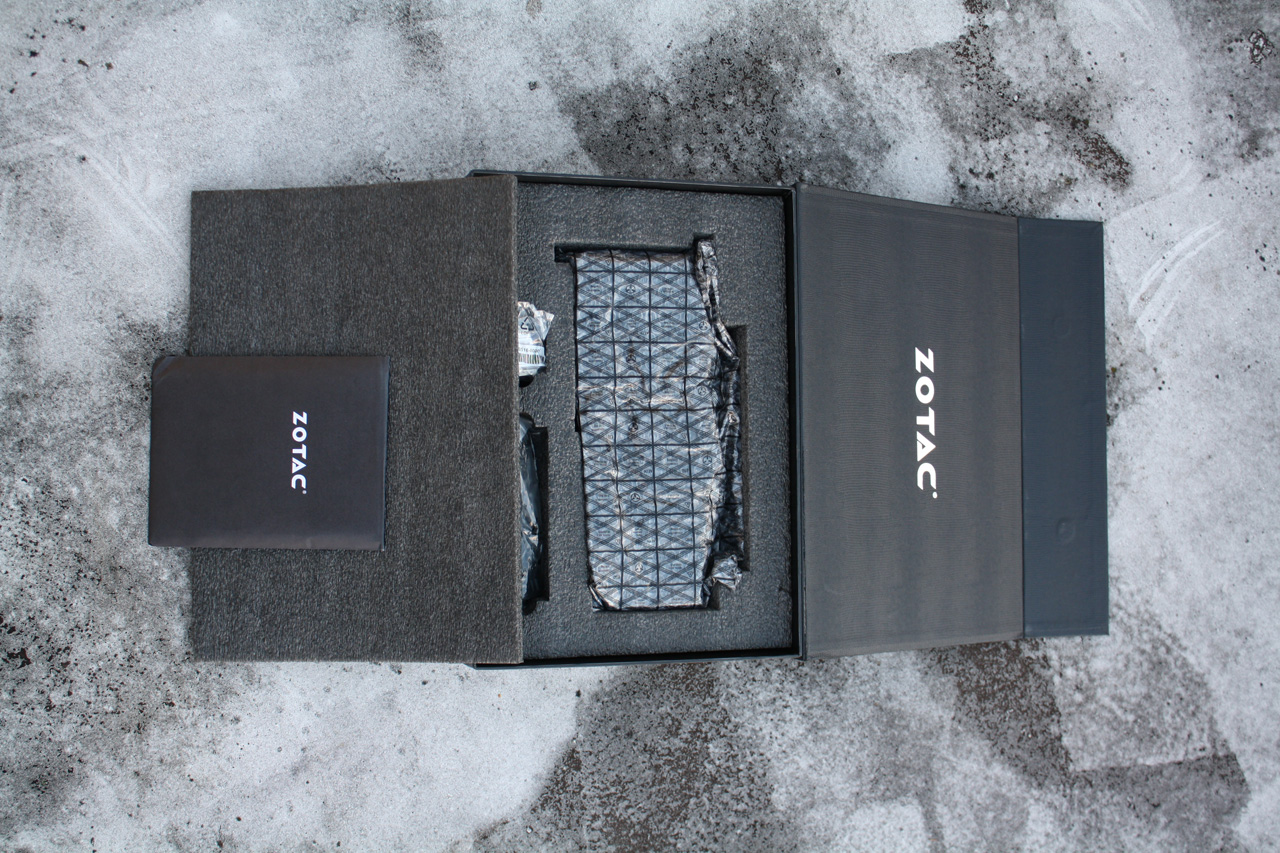 In addition to the card itself, you get a pair of 8-pin power adapters that let you still power the card even if your PSU doesn’t provide 8-pin plugs. You also get a driver CD.

Edit: In checking some other reviews to sanity check benchmark results, it seems a USB cable should have been included to connect to the OC+ module. This wasn’t in the box. Whoops. 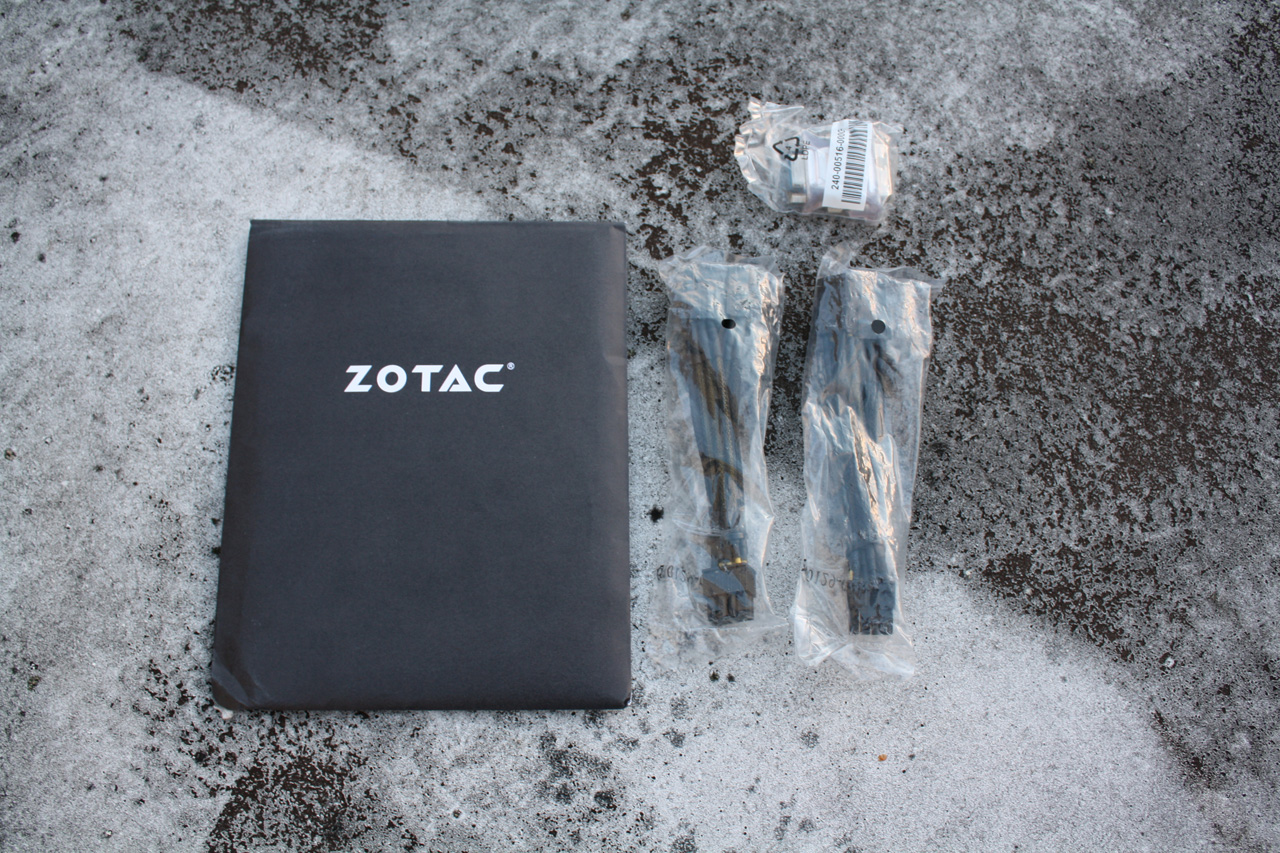 Now we have our first look of the card itself – and it’s a beauty. The top is dominated by a trio of 90mm fans, with the frame clad in a carbon fibre pattern. You can see the transparent lighting area at the very top of the picture. 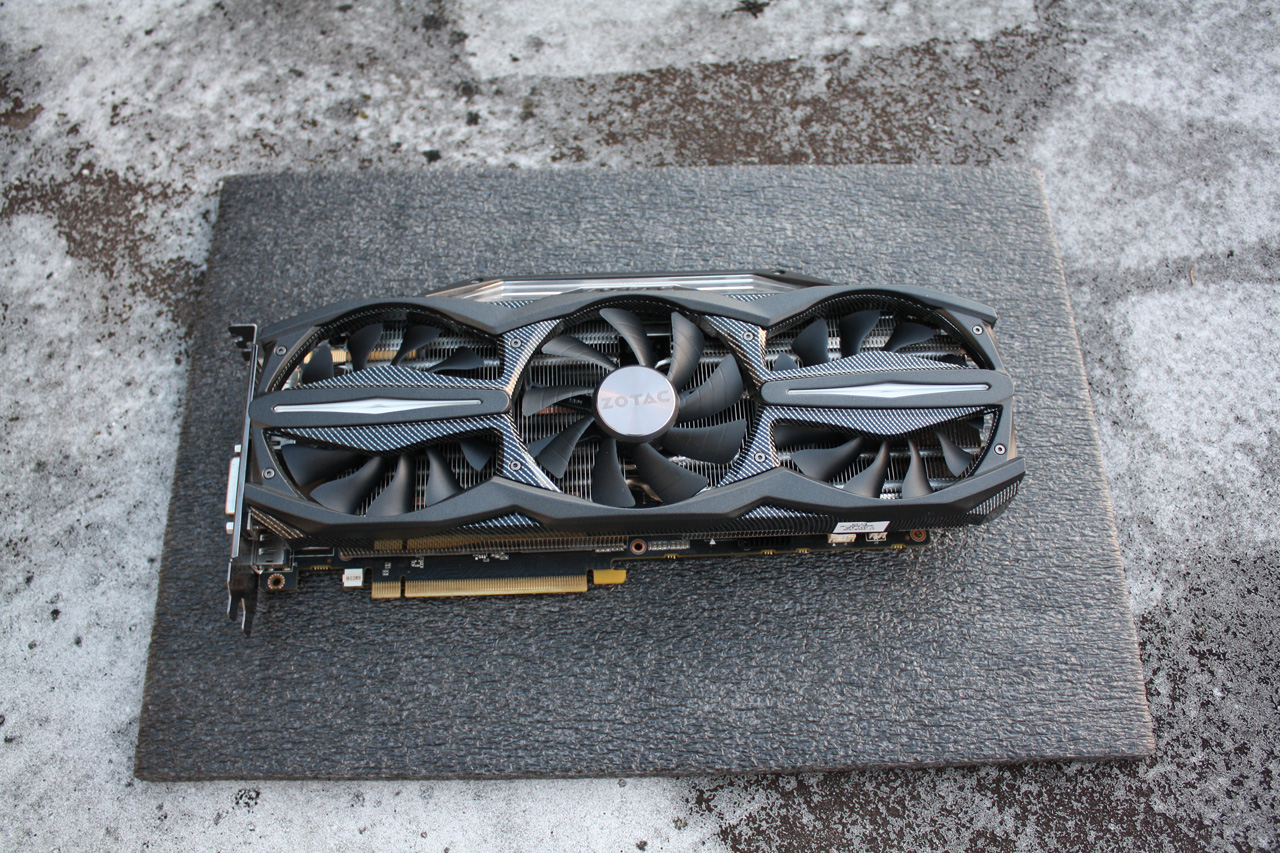 Closeup of the fan’s centre point, which looks to be made of brushed aluminium. 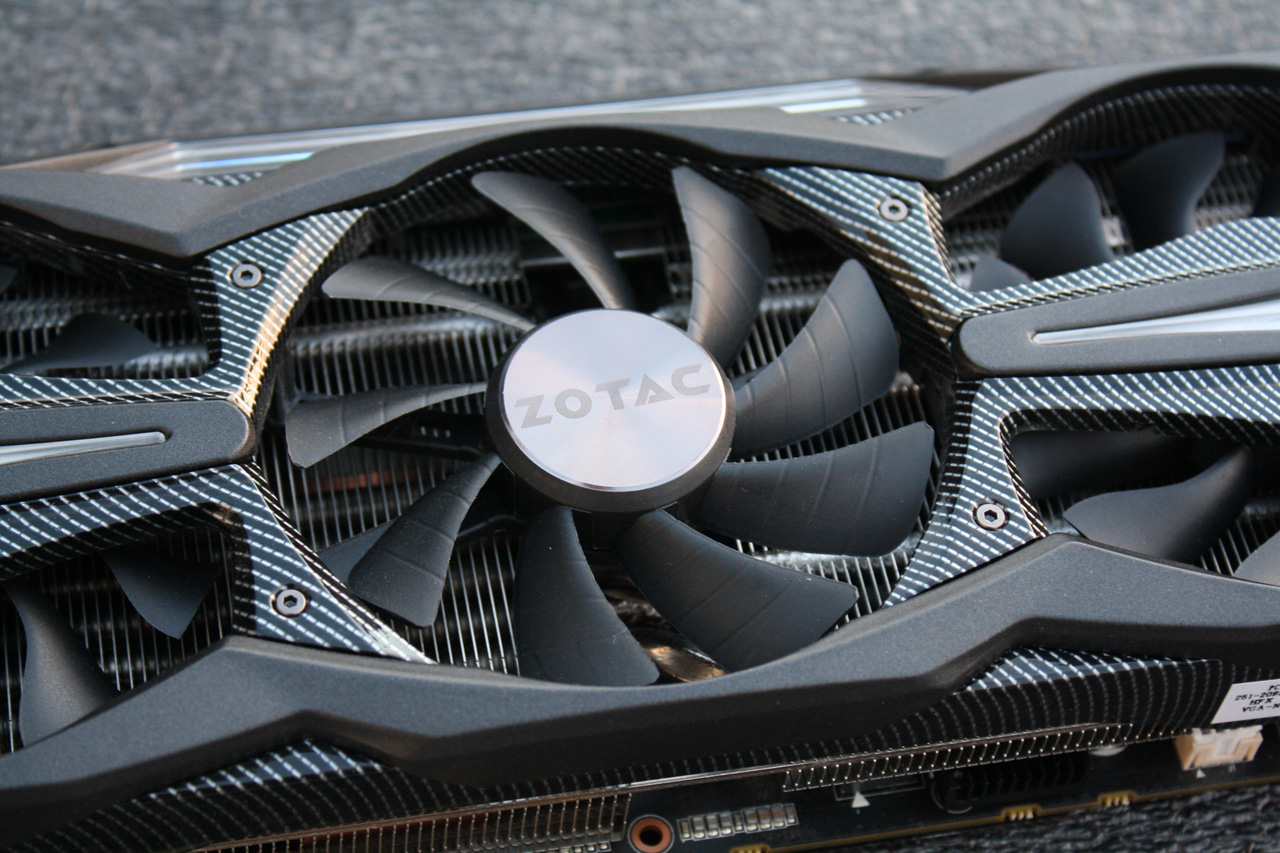 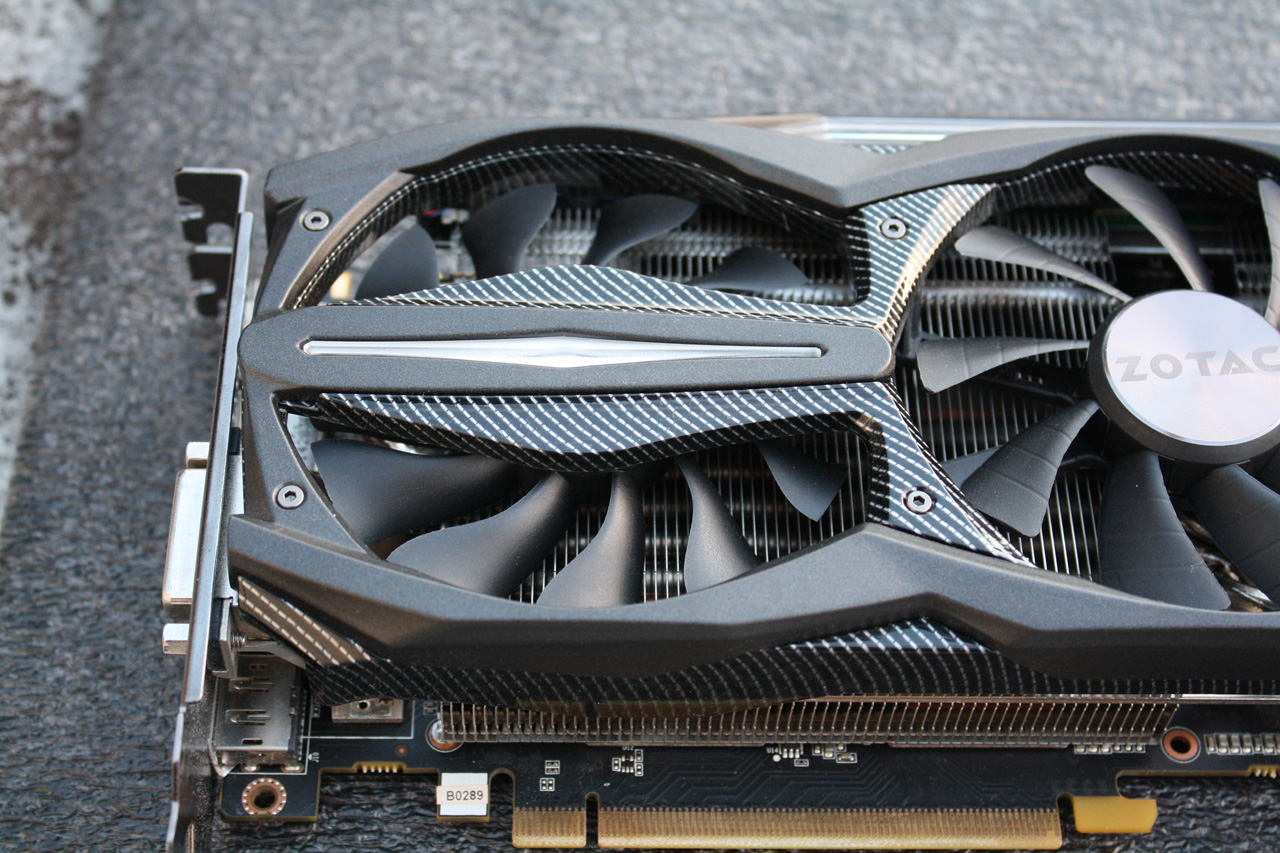 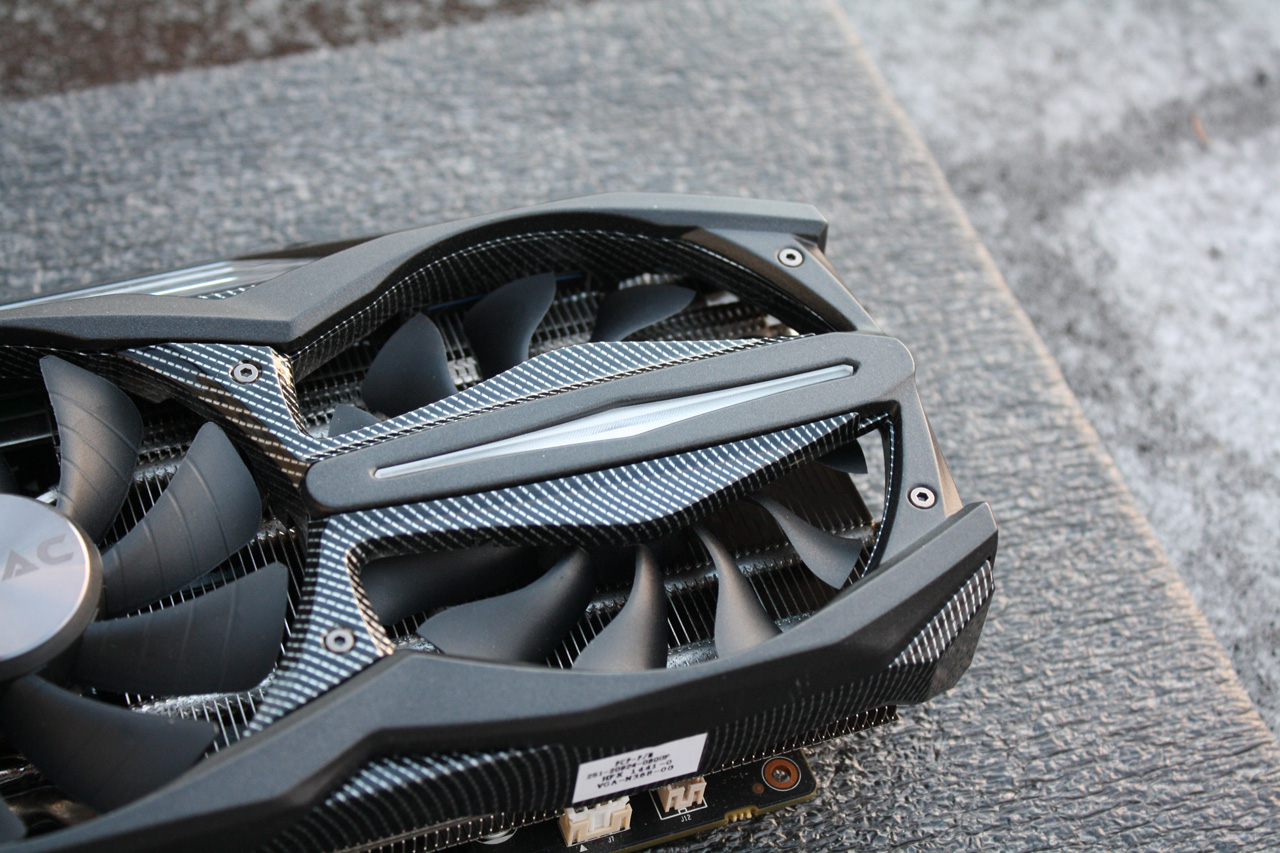 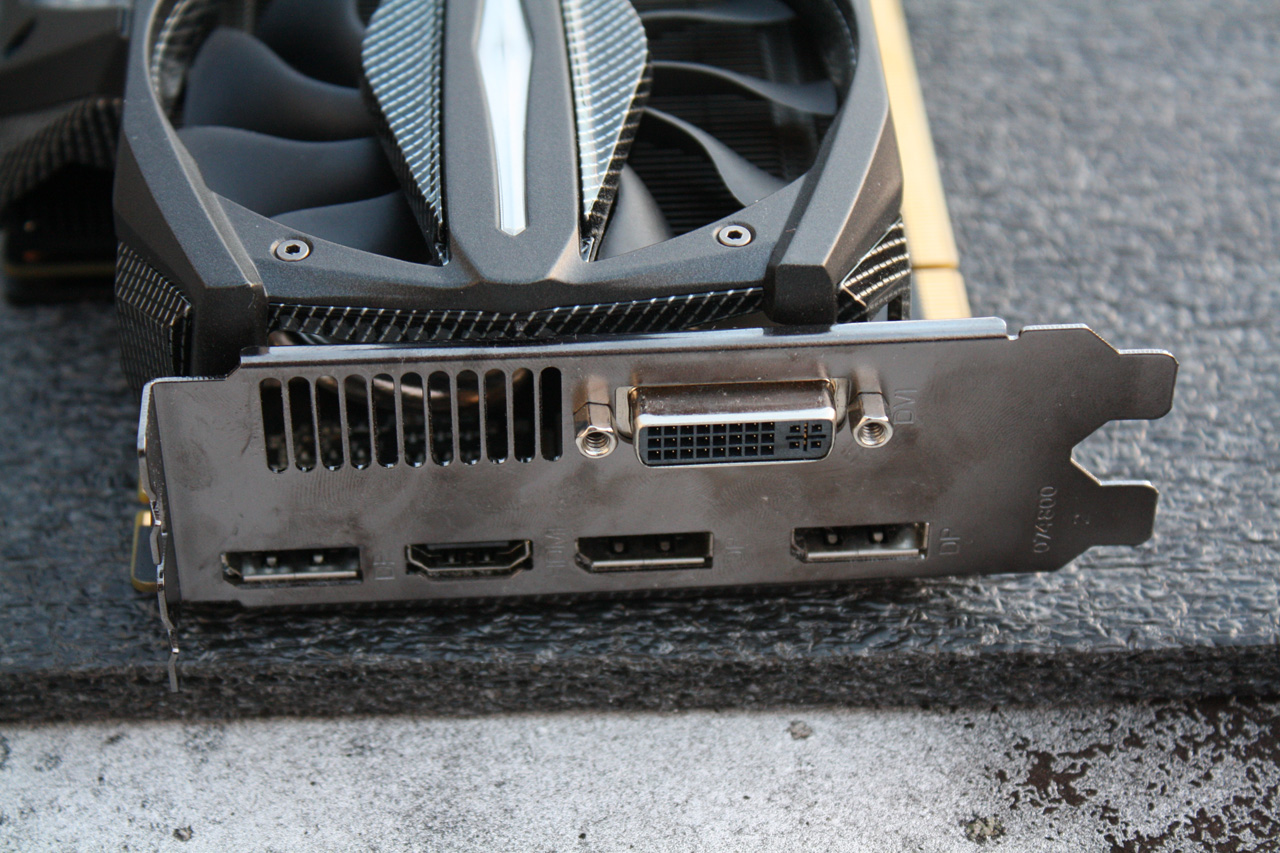 On the bottom of the GU, we see the POWER BOOST capacitors. The card uses a standard PCI Express connector, at the 3.0 standard as we’d expect for a card this new. 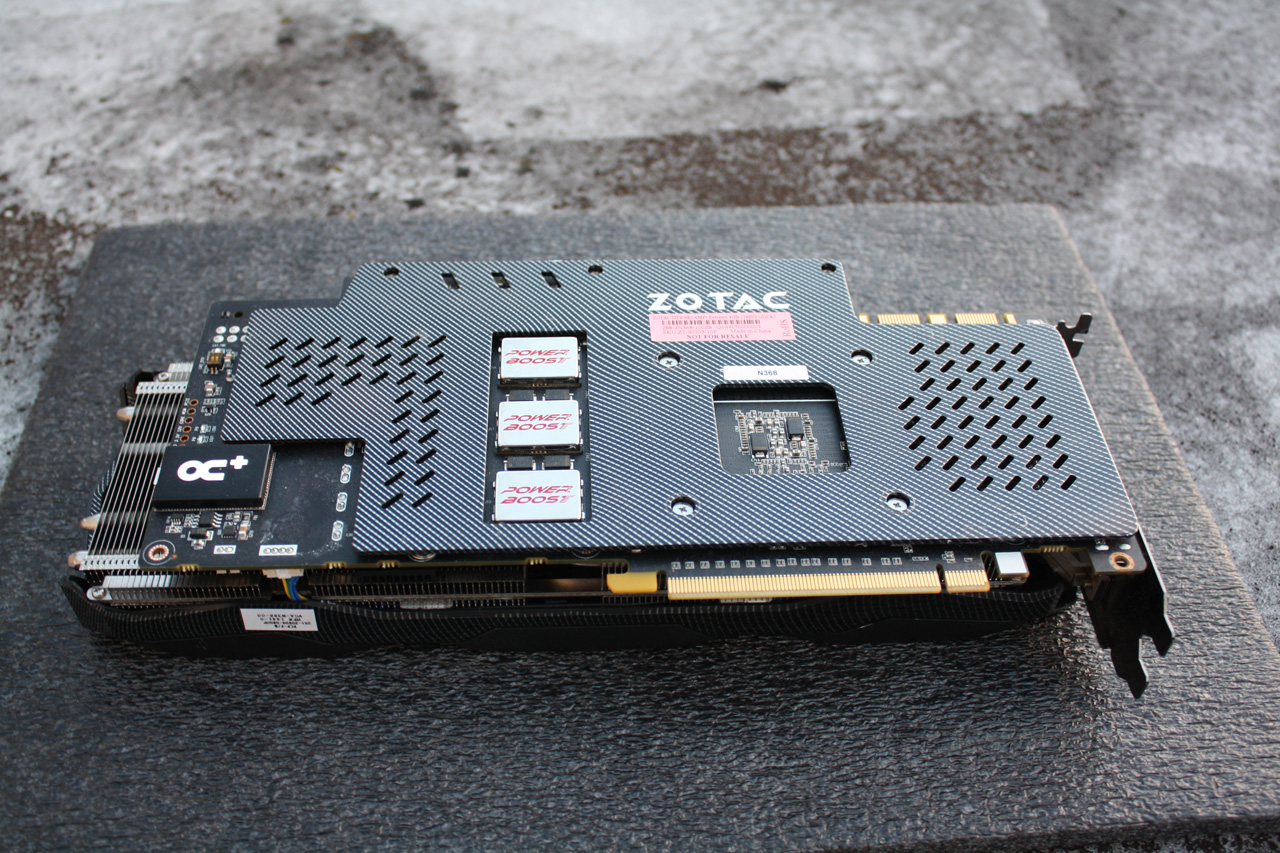 Here’s an OC+ module. No points for correctly guessing what that stands for. On the right side of the module, a mini USB cable should connect the card to your motherboard… but one wasn’t included in my box. 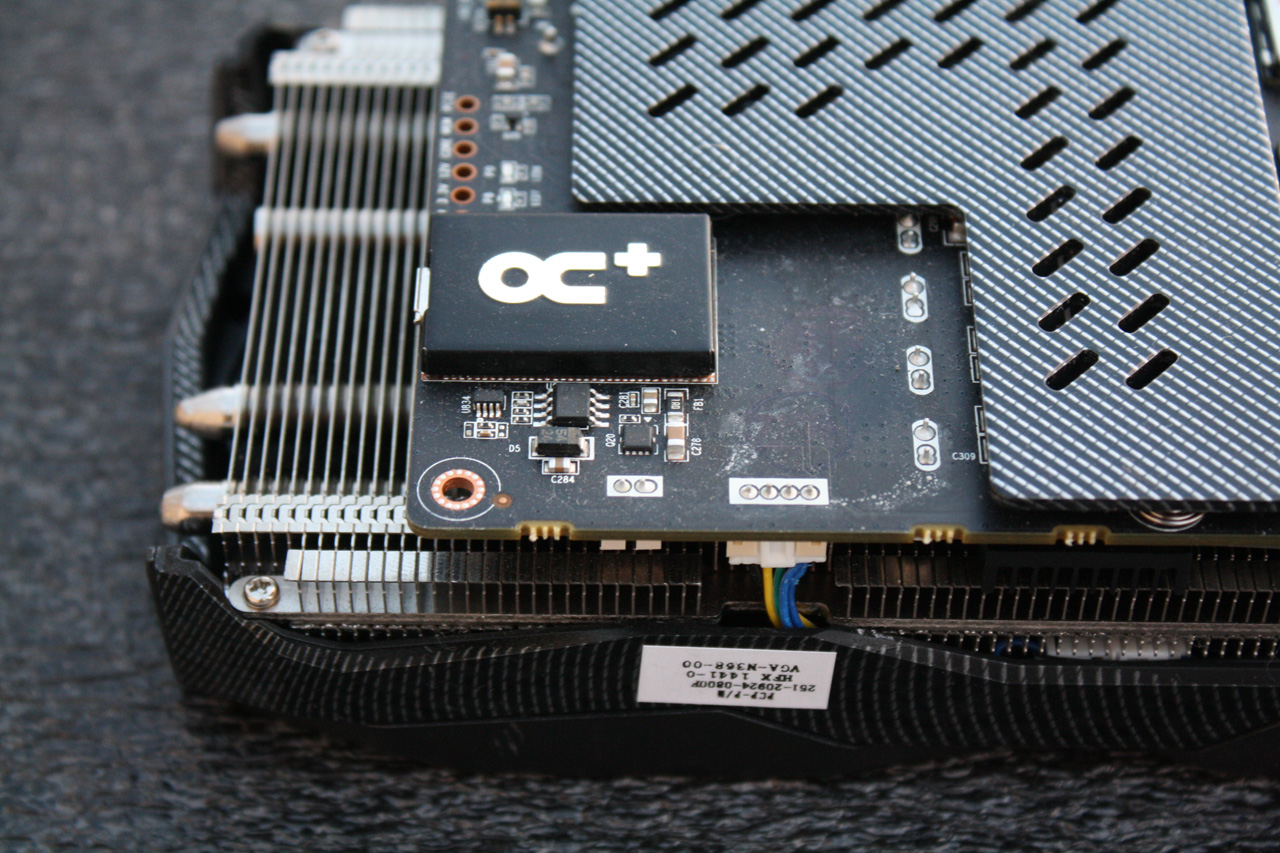 NOT FOR RESALE. Okay then! 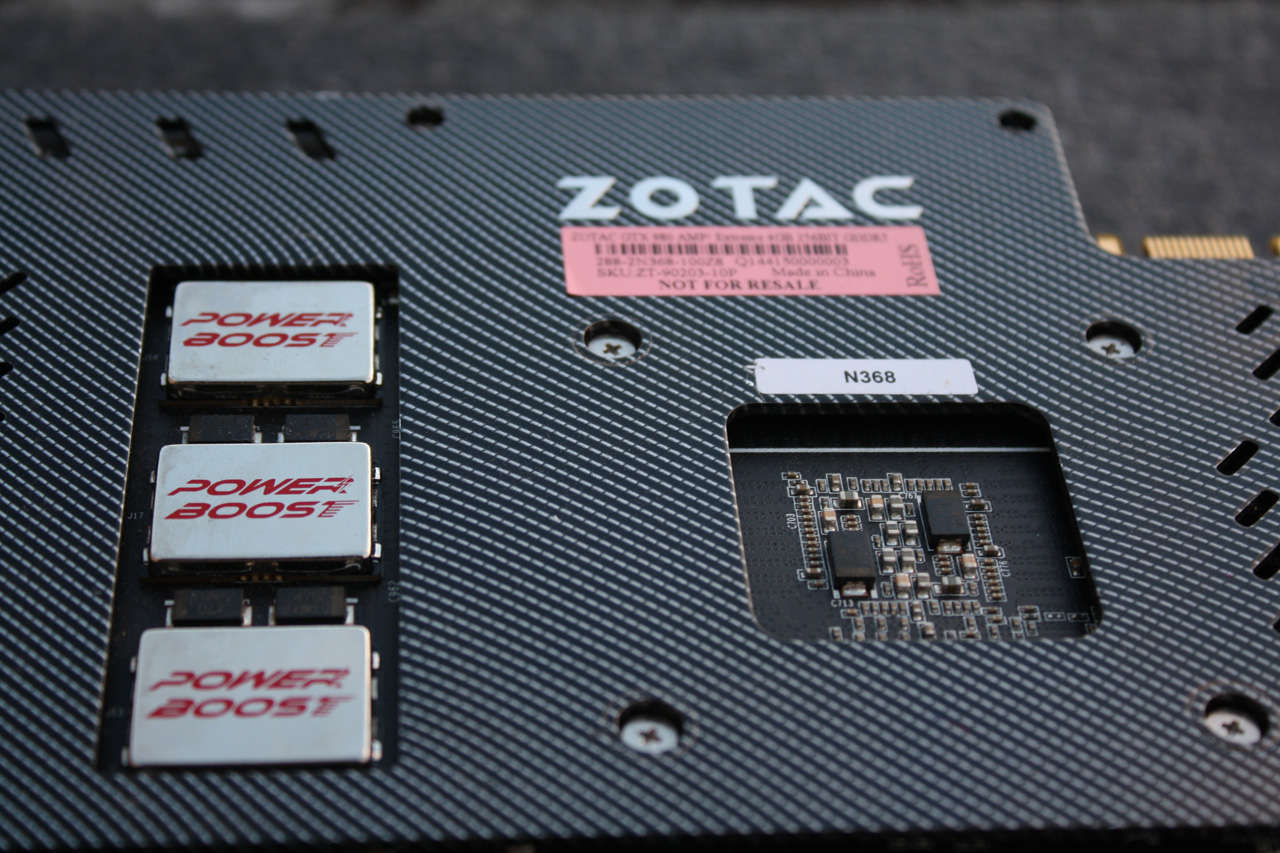 So – a very sexy looking card that looks professional, not gamer-garish. There’s not much point letting this card sit outside to get rained on, so let’s get to testing!

Testing in the graphics card world means benchmarks, so let’s get rolling. We’ll be scoring this card’s performance in a number of game benchmarks, plus a synthetic benchmark.

Here are the specs of our test rig:

Total War: Rome 2 is the most recent game on our list, offering a decent challenge for graphics cards with its lush and enormous battlefields. The game includes a nice benchmark built into the options menu, which we’ll make use of.

The graphics settings are on Ultra, with the only thing varying in each test being the resolution. We’ll test all three mainstream gaming resolutions nowadays – 1080p, 1440p and 2160p (aka 4K). As well as the card on its stock overclock, we’ll be testing its 3D+ quick boost overclock and the Crossfired AMD 6950s that the 980 replaced.

It’s interesting to note how little a difference there is between the two overclock levels. There’s always a slight boost, but it’s only about 1%… barely a difference at all. Of course, the performance gap to the 6950s in Crossfire is more noticeable.

Metro Last Light is a great, claustrophobic shooter by Ukrainian developers 4A Games. The game has both high system requirements and an excellent benchmark tool, so it’s a natural choice for our review. We’ll examine performance at a range of resolutions, from 1080p, to 1440p and 2160p (4K). Other settings are: Very High quality, AF 4x, Normal motion blur, Normal DX11 tessellation and Advanced PhysX turned On.

Even without being overclocked, the 980 was more than capable of besting Metro Last Light, even at nearly its highest settings. 1080p was a doddle, with the card scoring 91 fps here, but even 1440p was above 60 fps. 4K proved more of a challenge (as it pushes four times the pixels of 1080p), but even here reducing the detail settings slightly allows for a result higher than 60 fps.

Bioshock Infinite is a beautiful game, based on the Unreal Engine 3. It also includes a benchmark; we’ll be using the 1080p, 1440p and 2160p benchmarks at the ‘UltraDX11’ preset. As before, we’ll be evaluating the 980 Amp! at stock, then overclocked (at the 3D+ preset) and against the pair of 6950s that previously resided in the rig.

Once again, the 3D+ overclock appears to make little difference – only a frame or two. Regardless, the card is easily able to handle Bioshock Infinite, even with all the bells and whistles and a mighty 4K resolution.

Company of Heroes 2 is a brilliant strategy game with a punishing benchmark… indeed, the benchmark is a worst-case scenario that you’ll almost never see in the single-player or multiplayer game. Single-card systems work best here (as CoH 2 doesn’t support multiple cards), so let’s see what the 980 Amp! Extreme is capable of.

Even CoH2 still manages to kick the crap out of the 980 at its highest settings. It is worth noting that the test rig does include a Intel Core i7 2600k, which was good three years ago but is a little behind the times now – and that the benchmark really is pretty demanding, and we’ve selected the very hardest settings. As with our other benchmarks, there’s almost no difference between the two OC settings of the 980.

Our synthetic benchmark of choice is 3DMark, which provides a repeatable and comparable test at a range of workloads and quality settings. The tests go from hardest to easiest. I’ve listed all of the results so you can download 3DMark and compare them to your system.

I’ve also included some points of reference that I have access to: namely results from the same test rig with its previous GPU, a pair of AMD Radeon 6950s in Crossfire. I also overclocked the rig using the ‘3D+’ preset to see how the results changed. Finally, I also included results from the P505 laptop I reviewed earlier, which uses the GTX 980M GPU.

We see very strong results here, proving that this card is capable of 4K gaming and at least the equal of other GTX 980 cards on the market at their stock speeds… although overclocking provides a much milder increase than I would have expected.

In this section, we’ll cover everything that isn’t a benchmark – installation, real in-game performance, and the Firestorm software provided with the card. Temperatures, noise and light are also covered.

Installation was very straightforward; the card fit easily into my (admittedly roomy) NZXT Phantom. The card is reasonably long at 30cm, but I had no issues navigating it inside. Once it was inside the PCI-express slot, the only thing to remember is to actually hook up the twin 8-pin power connectors (and the OC+ USB cable), and you’re golden.

In games, the GTX 980 proved the equal of pretty much everything I threw at it.

More recent and demanding titles didn’t all reach that 60 FPS / 4K standard at their highest settings.

It’s not quite a single card solution for maxed out 4K gaming, but it’s pretty damn close.

The 980 Amp! Extreme Edition uses Zotac’s Firestorm overclocking utility. The temperature readout is straightforward, but the overclocking options are confusing compared to other GPU utilities.

For example: Quick Overclock has three settings, labelled “2D”, “3D” and “3D+”. 2D is stock OC, 3D is a small increase to the OC, and 3D+ is a moderate increase… I think. I can’t think of any reason to label these settings this way; it’s just confusing.

‘Advance’ provided custom settings, although as has been reported elsewhere voltage is hamstrung beyond what even the reference 980 design provides. At least the options provided here are quite straightforward and easy to understand. 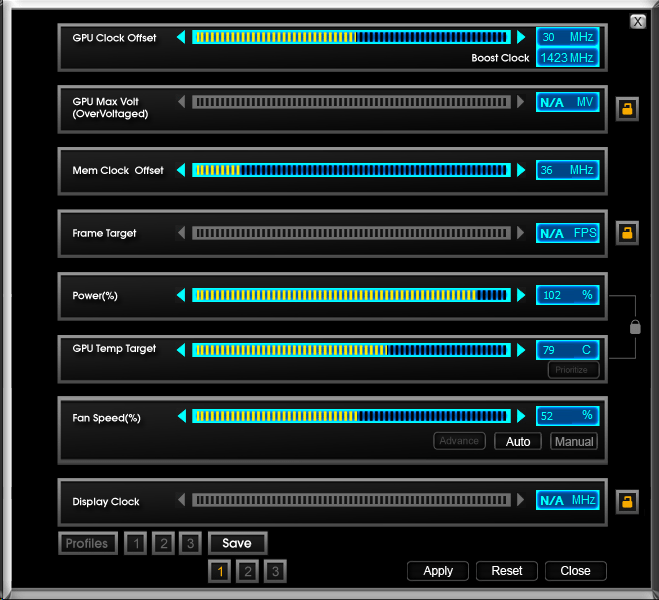 Gamer is the final option, which is also called S.S.P. once opened. This gives you additional control over the voltage (and fan speed).

It doesn’t launch (or indeed do anything) if the USB cable is not connected. Ideally, a message would pop up to inform you that the cable is unplugged. 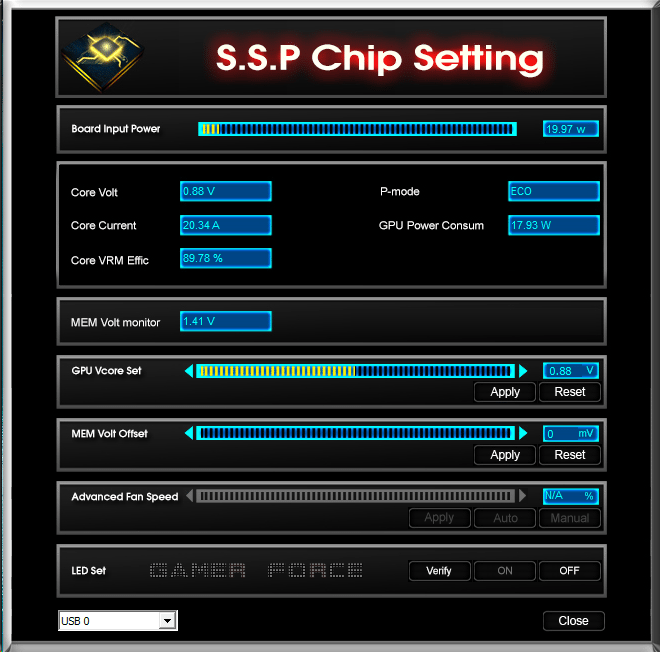 Temperatures ranged from 24 to 50 degrees (during intense benchmarks and overclocking), but mainly remained at a tolerable 35 degrees. This is a really nice result, and should give you plenty of room to experiment.

The GTX 980 proved very quiet, running noticeably quieter than the pair of 6950s it replaced. Fans usually stayed at about 45% speed, which was audible but eclipsed by pretty much all ambient noise like mechanical keyboard click-clack.

The GTX 980 includes a light which goes green when it’s in 2D mode, and red when it’s in 3D mode. This is kind of cool to look at, but I wish that you could get it to change colour in response to temperature or frequency instead. That’d be far more practical.

The GTX 980 Amp! Extreme Edition is a strong card right out of the box, capable of offering ridiculous performance for a single card solution at its stock clock speeds. However, it’s harder to justify the extra expense of this card for overclockers, given its poorly designed software. Hopefully this will be improved in future updates, but for now I’d recommend an alternative 980 if you’re looking to overclock.

Tech21 Patriot review: go ahead, drop it like it’s hot

Today, I threw my iPhone 6 Plus around my living room. £700 worth of shiny metal and Apple magic, whizzing...