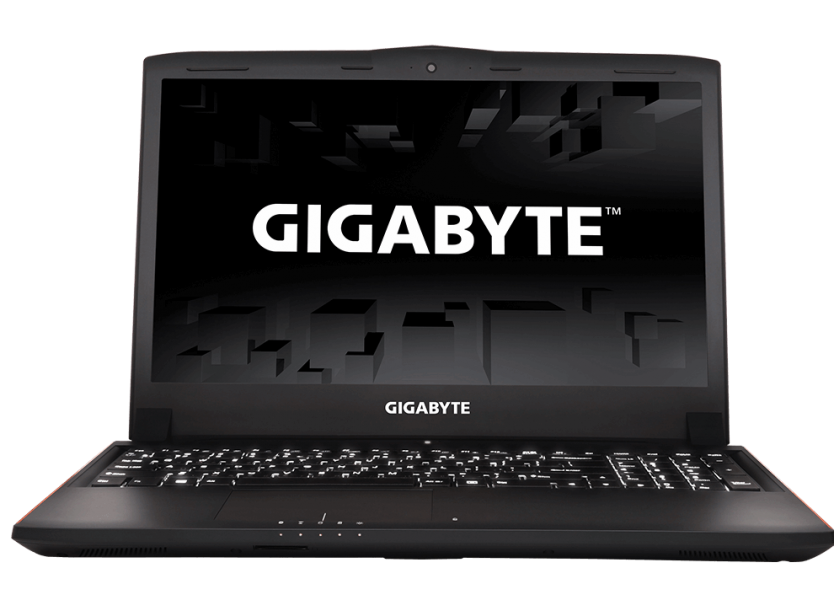 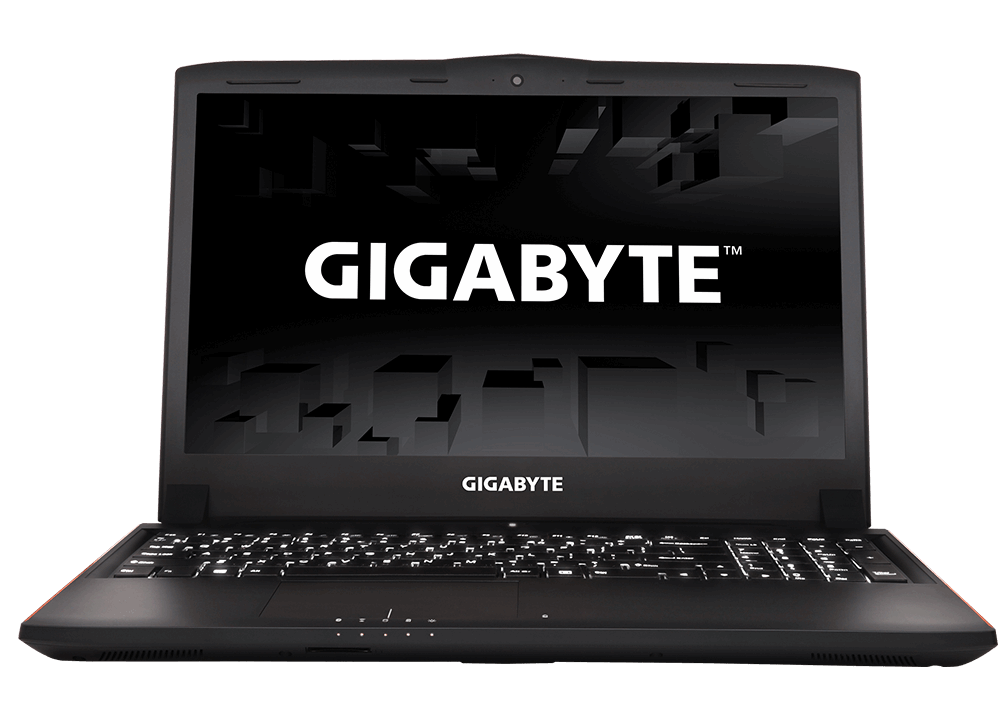 The Gigabyte P55W v5 is Gigabyte’s mid-range, mid-size laptop. It’s not as slim and trim as some of its peers, but that extra space allows for a deeper keyboard, better thermals and — hopefully — better performance too. With a GTX 970M and i7-6700HQ on board this laptop should be a capable performer at 1080p, so let’s put it to the test.

The Gigabyte P55W v5 is a strong choice if you’re looking to play games at high settings at 1080p. While its bland and bulky design isn’t super portable, it allows for a well-travelled full-size keyboard, all the ports you’d ever need and decent battery life too. If you’re looking for a capable gaming laptop for £1200 and prefer performance to portability, the P55W v5 should be near the top of your list.

The P55’s design hasn’t changed much over the past five iterations, so this section will look familiar to anyone that’s seen our P55K review earlier this year. The Gigabyte machine remains fairly thick for a gaming laptop, ranging between 27 and 34 millimetres at its widest point. Its design is largely ordinary, with the lines of orange trim running down each side being of one of the few clues as to its gaming status. (Other clues include the stickers clustered below the keyboard, and the fairly significant-looking cooling vents on either side of the frame.) Still, the overall look certainly isn’t bad, just a bit plain for a moderately expensive gaming laptop. 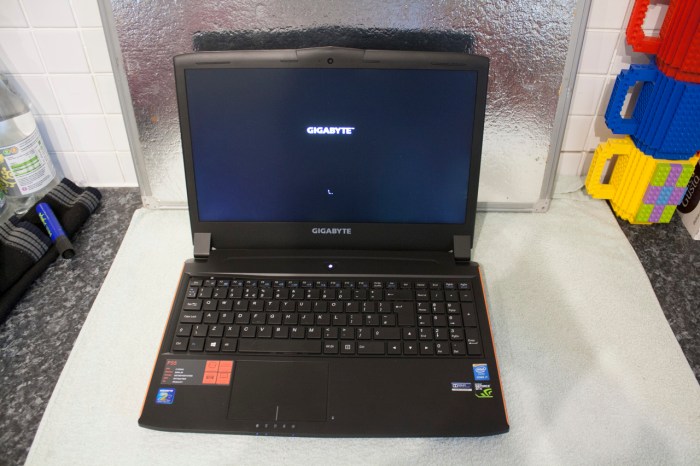 The display is a 1920 x 1080 (Full HD) LCD, with good viewing angles and reasonable colour reproduction. The resolution ensures that we don’t have to deal with Windows scaling, without text or icons looking too pixelated. In-game, we should expect reasonable performance at the native resolution, which is a nice advantage over higher DPI screens that often have to run at 1080p or lower to ensure a crisp 60 FPS. 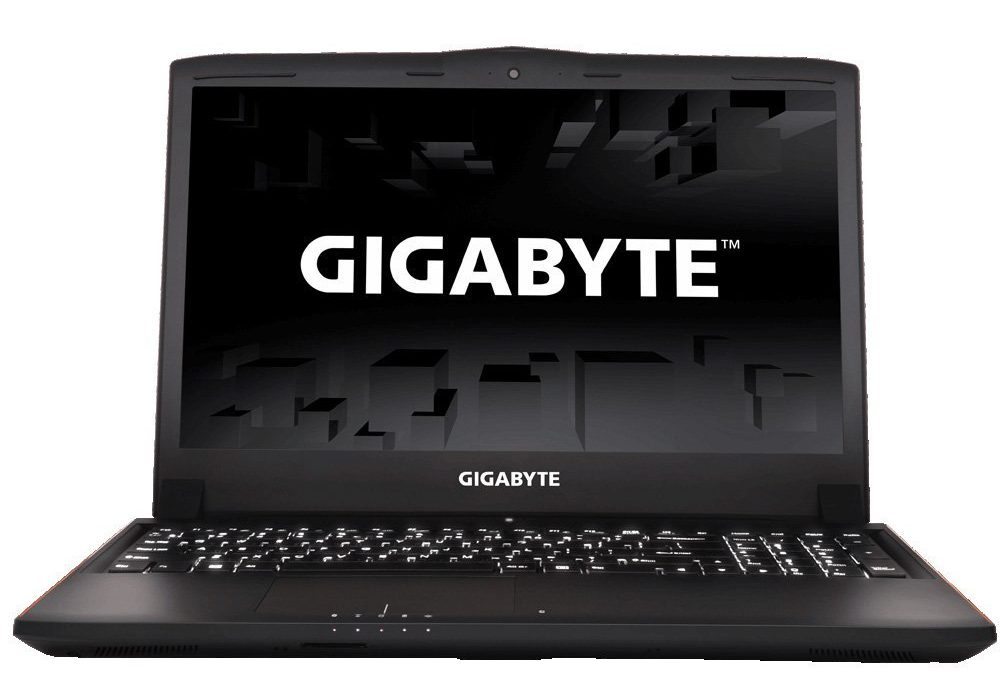 The keyboard is expansive and sensibly arranged, with good travel in the keys and backlighting – handy for late night gaming! We have the usual arrangement of function keys along the top, with full-size arrow keys and a number pad tucked on the right. Some gaming laptops have a line of macro keys down the side, but I’ve never particularly used them and I don’t mind their omission. 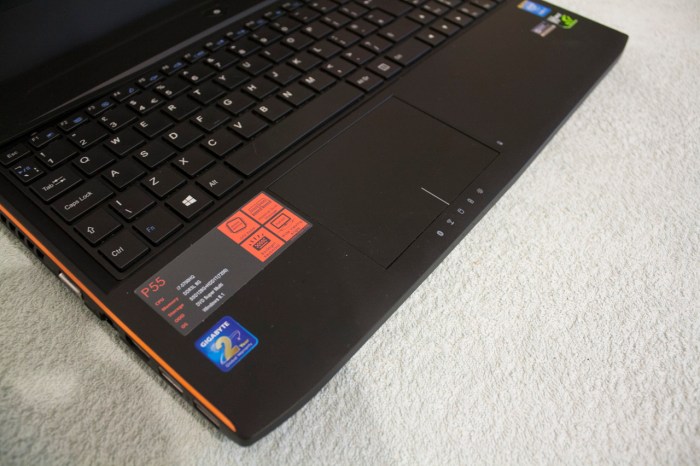 Below the keyboard is the large trackpad, which works well enough for mousing, tapping, clicking and two-finger gestures like scrolling. You’ll likely be plugging in a mouse for your gaming (unless you’re really skilled), but it’s nice to know you can get around the web and Windows without issue. The touchpad buttons felt a little stiff on our review unit, but they were still usable enough.

Just above the keyboard we have an unusual pentagonal power button, which is happily less bright in real life than it appears in the photo below. 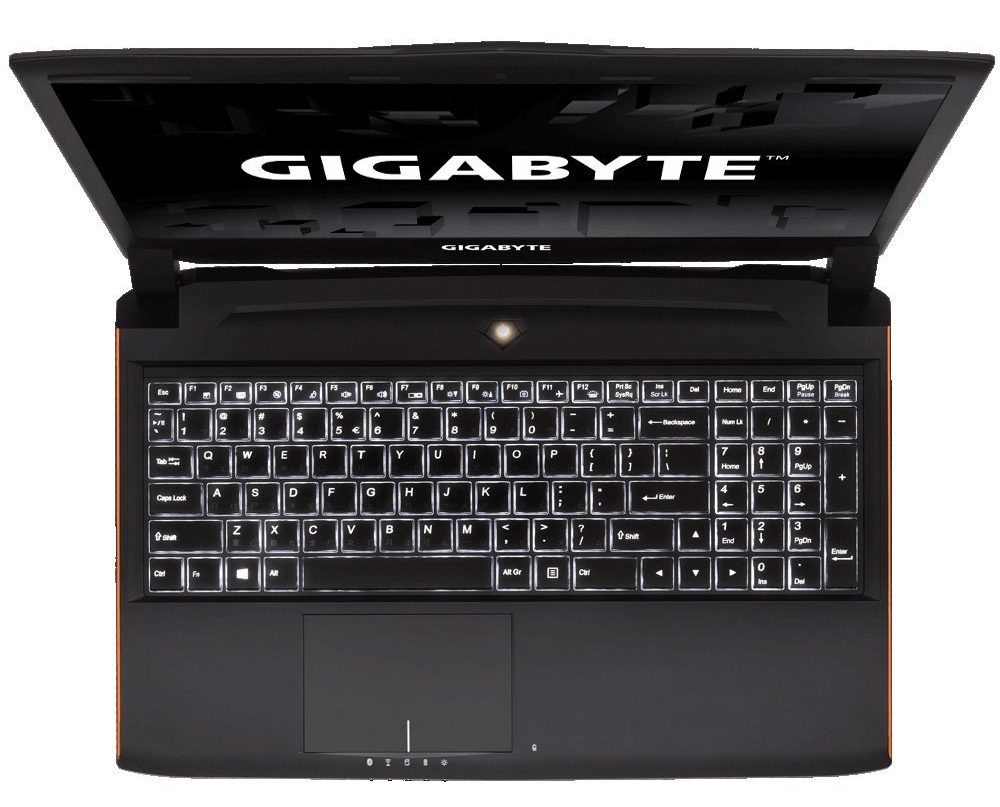 In terms of ports, we’ve got USB 3.0, USB Type-C, HDMI, ethernet and VGA (somehow still a relevant port), all on the left hand side.

On the right, we have a DVR-RW drive and the remainder of the ports: two more USB 3.0 ports and two 3.5mm ports for headphones and mic.

The laptop is largely rectangular, but does have a gentle prow to the lid for added flair. 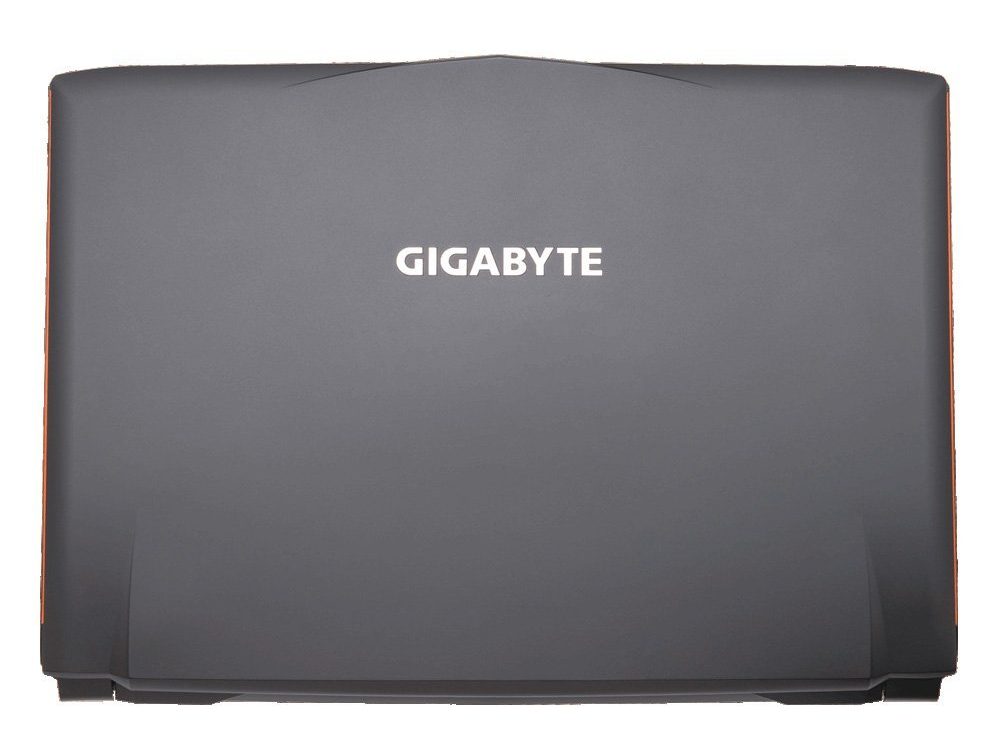 The P55K isn’t a bad-looking laptop, but I hope you’re a fan of that orange trim. I am, but my mother would hate it (if she was looking for a gaming laptop, of course). 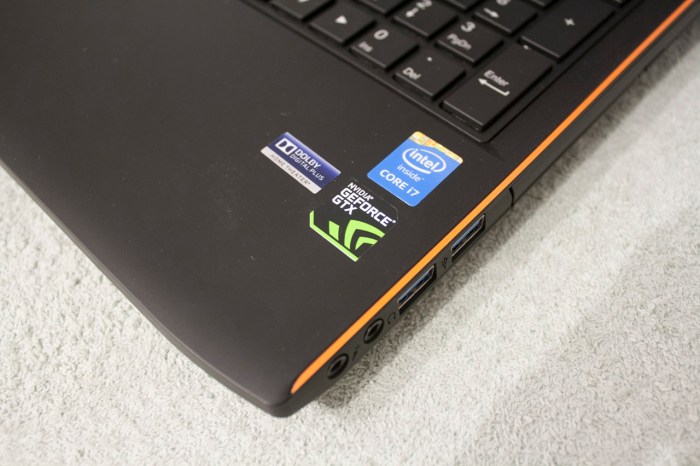 Despite its plastic construction, the P55K still feels solid in-hand with minimal give or flex. It’s not as dense as a typical high-end gaming laptop or a more modern aluminium-based machine, but it seems durable and should survive to obsolescence. 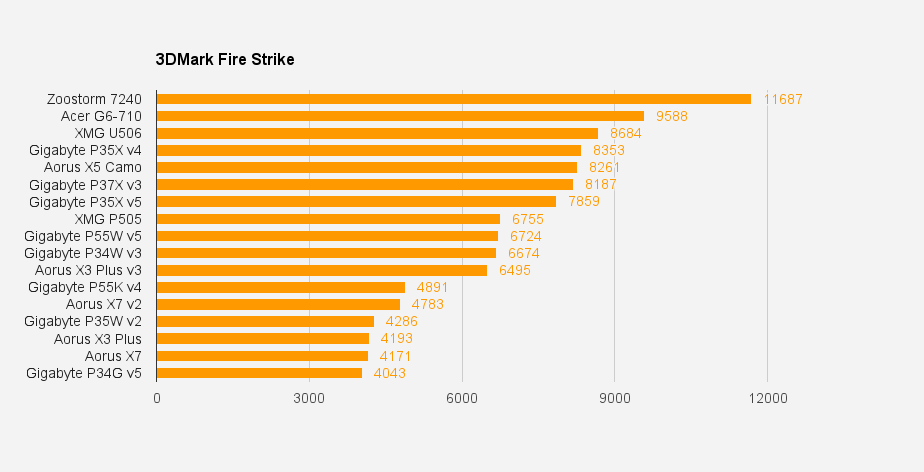 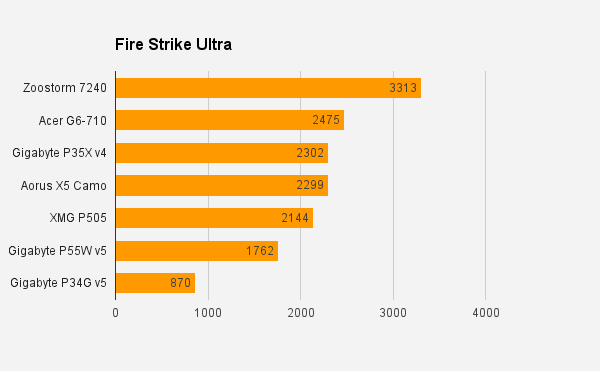 The P55W v5 puts up a middling score in the Fire Strike test, coming behind the 980M-equipped Gigabyte machines and desktops, and ahead of machines with the 970M or lower.

In the 4K Fire Strike Ultra, the P55W reports a score more than double that of the P34G v5 we looked at last week, but it’s still some way below the 2000 mark that indicates some games might be playable at 4K resolution.

Expect solid 1080p performance, but not much more than that unless you’re willing to accept low detail settings, low frame rates or both. 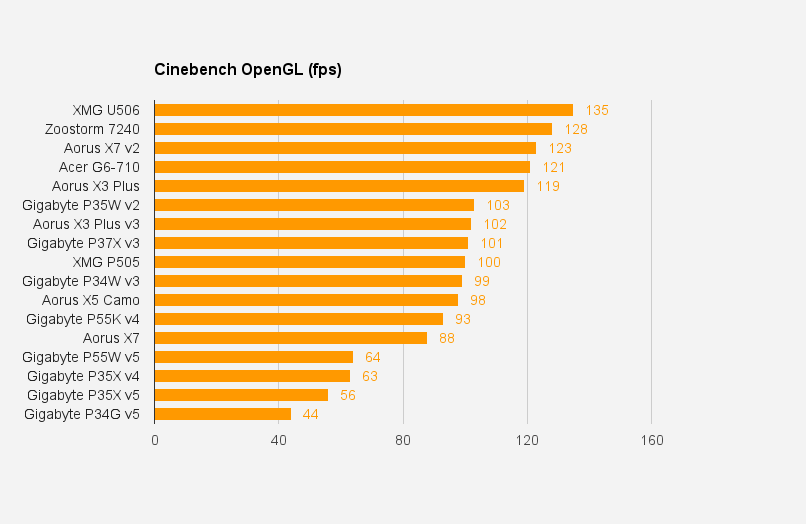 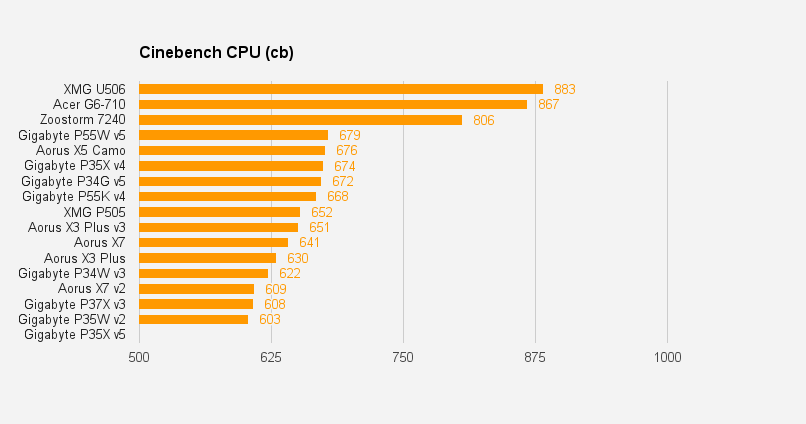 Next up is the Cinebench test. As with the P34G, we see very poor OpenGL performance with recent Gigabyte laptops, but a strong score in the CPU portion of the test (which renders a 2D scene). The P55W v5 actually records the highest score for a machine with a laptop-class processor, being bested only by desktops and the desktop-CPU-toting XMG U506. 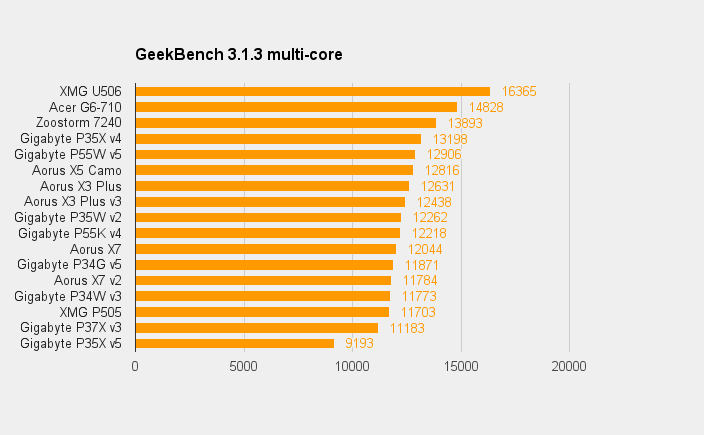 The P55W v5 continues its run of form in the Geekbench test, recording very high single-core and multi-core scores. It’s enough to put it in fifth place overall, behind only the desktop machines, P35X v4 and the XMG U506. It’s good to see that the lower power requirements for the sixth-generation processors haven’t impacted maximum performance. 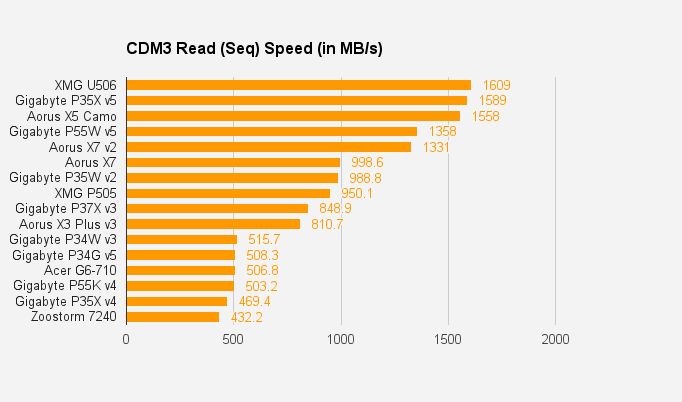 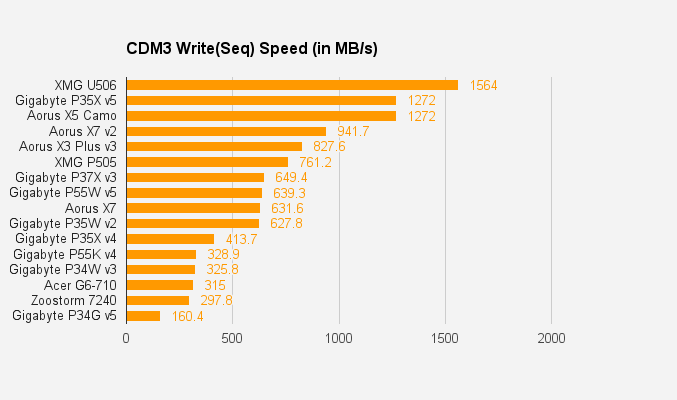 The P55W does pretty well in the CrystalDiskMark tests, with its PCI-e (NVMe) solid state drive recording a super-fast sequential read speed of 1358 MB/s. Write performance is more middle-of-the-pack, at nearly 640 MB/s. Drilling deeper into the results, this dominance continues at 512K and 4K sizes, with a 4K queue depth 32 result that’s faster than any we’ve ever recorded.

Our first game test is Tom Clancy’s The Division, a cover shooter MMO set in the frozen wastes of post-viral-outbreak NYC. Surprisingly, the P55W v5 doesn’t manage to eclipse the cheaper P34G v5, which gets 5 fps more at the same Ultra / 1080p settings. Still, both scores are nowhere near playable, so you’d want to drop down to medium or low settings to ensure a crisp framerate. 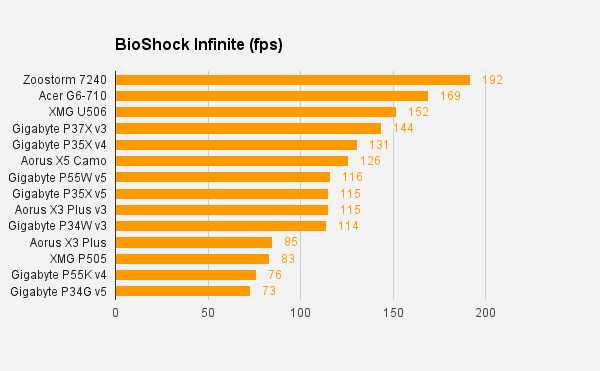 Bioshock Infinite represents the easiest workload for our test machines, but it’s still important given just how many games of its era use the same Unreal Engine. The P55W v5 proves that it’s more than up to the task, with a solid result of 116 fps at high settings. 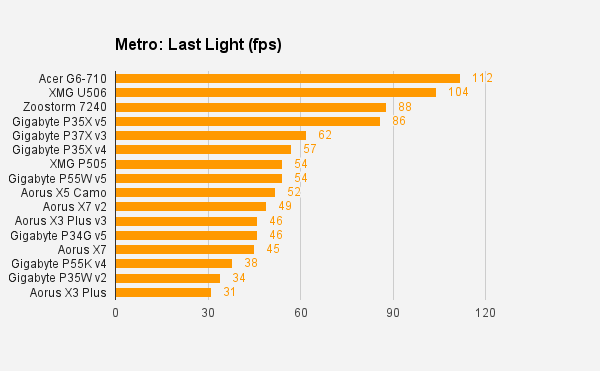 Metro is another demanding benchmark, but the P55W v5 again shows it has what it takes. A score of 55 fps average feels quite playable, and that’s at high settings too. While a desktop-class processor would allow for even better settings, the P55 is more than sufficient. 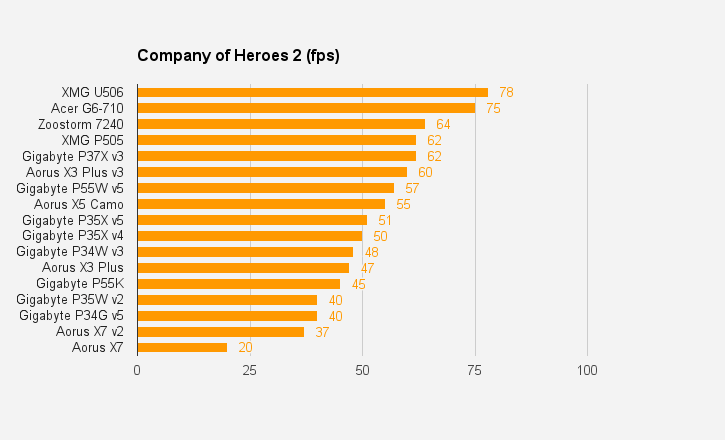 Company of Heroes 2 has one of the most difficult benchmarks we use, offering a kind of ‘worst case scenario’ rather than something more typical of either the singleplayer campaign or multiplayer. The P55W provides a surprisingly good score, just a few frames below 60fps. That should mean a perfectly playable game at 1080p and medium settings, with the ability to set some options to high and still get a solid frame-rate in the game. 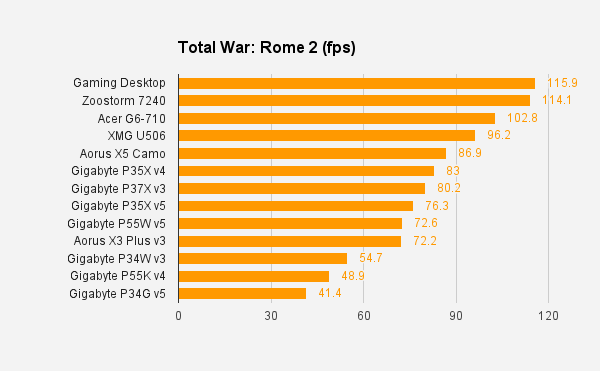 We conclude with a look at performance in a large-scale RTS, Total War: Rome 2. The P55W v5 does much better than the P34G v5, thanks to its better thermal performance and a better GTX 970 graphics card. The result is over 60 fps, and at Ultra settings that’s more than respectable.

As a gaming machine, the P55W v5 is able to consistently hit 60 fps at its native resolution of 1920 x 1080. While you may have to turn down some detail settings in recent games to do so, the very fact it’s possible at all is impressive. We played Counter-Strike, Doom and XCOM 2 on this laptop, and in every game the P55W v5 was able to keep up and deliver a fluid experience. 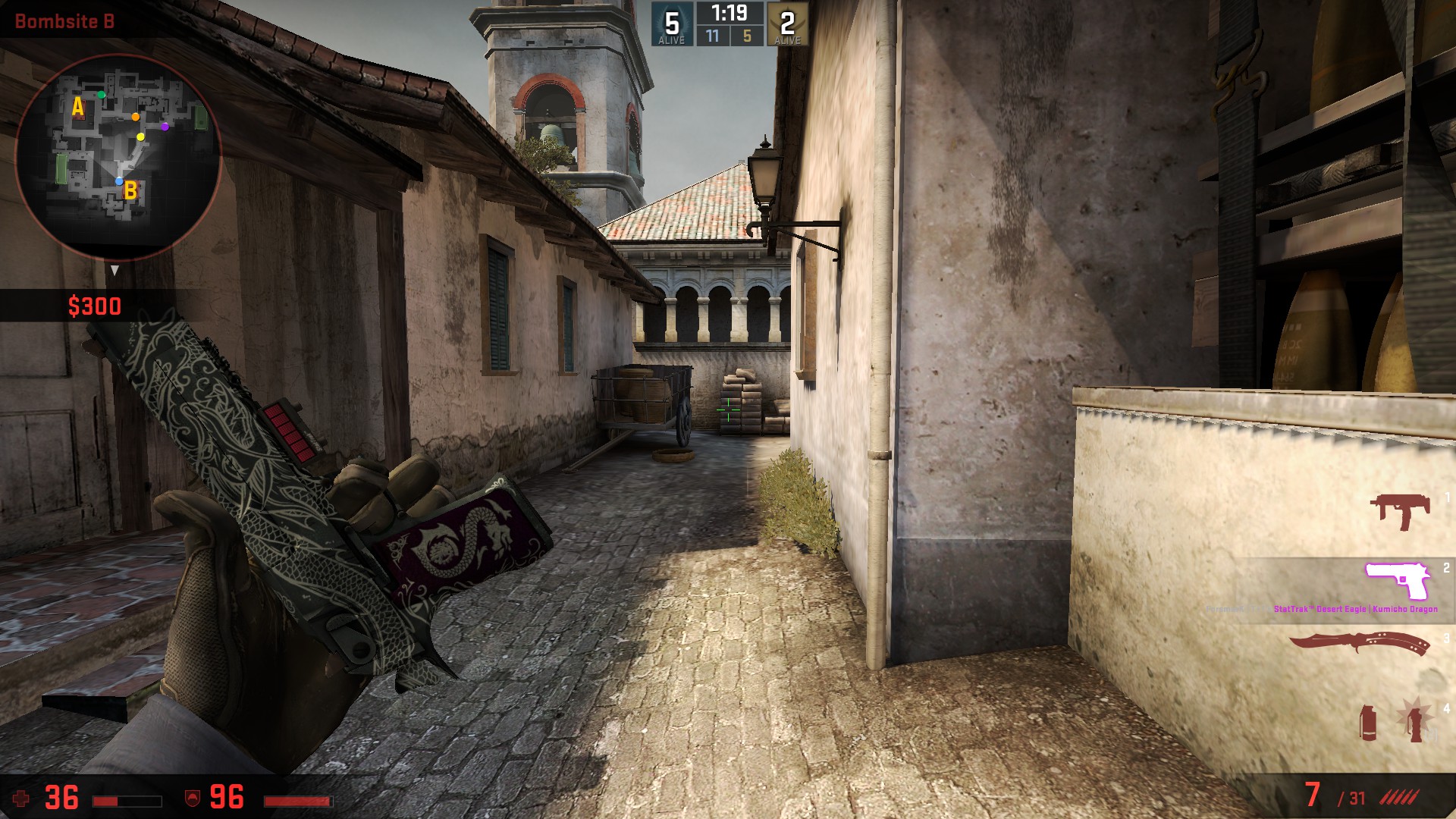 During these gaming sessions, we did notice that the laptop got quite hot, even when placed in a cool room on a glass desk. Elevating the laptop and increasing airflow helped immediately, providing more stable framerates and keeping the fans at a slightly lower level.

Of course, a gaming laptop’s strengths shouldn’t be confined to raw performance alone. A great gaming laptop should also offer a good-looking screen (check), a dependable keyboard (check) and enough ports to plug in all of your peripherals (check, check, check). The P55W v5 isn’t the most powerful laptop that we’ve tested, but it definitely impresses when it comes to that all-important price / performance ratio.

The P55W v5 remains a big and heavy laptop, but it’s portable enough to take on a train or a LAN party without much bother. You can’t tuck it in a messenger bag like a MacBook Air or a similarly sized Windows Ultrabook, but that’s fine — this is a gaming laptop, first and foremost.

Apart from weight, the biggest factor influencing portable use is battery life — there are a few trains and planes that come with AC power standard now, but many more where this isn’t an option, and a big battery can ensure you can keep writing up that report (or playing another turn of Civilization) many hours into your trip.

The P55W v5 is much improved here compared to its peers, thanks to the inclusion of a sixth-generation Core i7 processor. According to Intel, this new CPU uses 78% less power than the fifth-gen version, and that’s reflected in the total battery life. I got around six hours of useful battery life, about two hours more than I got with the P55K v4. That’s not amazing — some laptops boast 12+ hours — but it’s a significant improvement, and enough to allow for use on a transatlantic flight or most of a work day. You’ll still want to carry the charger with you for day-long sessions, though.

OPEN ALL THE CHROME TABS

Otherwise, the P55W is a pretty solid work laptop! The keyboard’s deep travel makes typing a joy, and the full layout ensures number crunchers have a numpad to use. The touchpad is spacious, although the buttons are a bit stiff, and the 1080p display provides just about enough screen real estate at 100% Windows scaling.

In terms of performance, there’s more than enough available to open ALL THE CHROME TABS, run batch jobs in Photoshop or render video at a reasonable pace. The new PCI-e solid state drive helps a lot too, ensuring that applications and large files open rapidly. All in all, there are no performance concerns here.

The Gigabyte P55W v5 is a pretty solid laptop, offering good gaming performance at 1080p and better battery life than its predecessor thanks to a shift to a sixth-generation Intel processor. The PCI-e (NVMe) solid state drive is also a big upgrade, ensuring super low loading times and rapid file transfers. The inclusion of USB-C and HDMI 2.0 are also nice future-proofing moves, ensuring your laptop will remain relevant for a good few years yet. While the P55W v5 still sports a thick, heavy and somewhat boring design, it’s hard to care when the fundamentals are this strong. 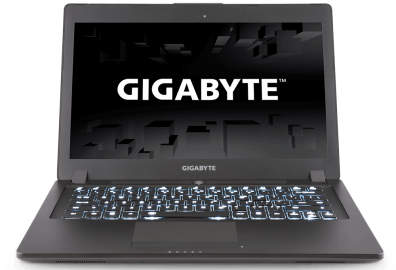 The P34G is Gigabyte’s smallest laptop, a compact 14-inch model with a reasonable £750 price point.... 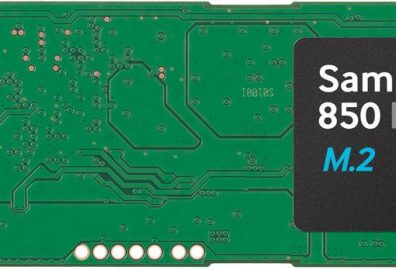