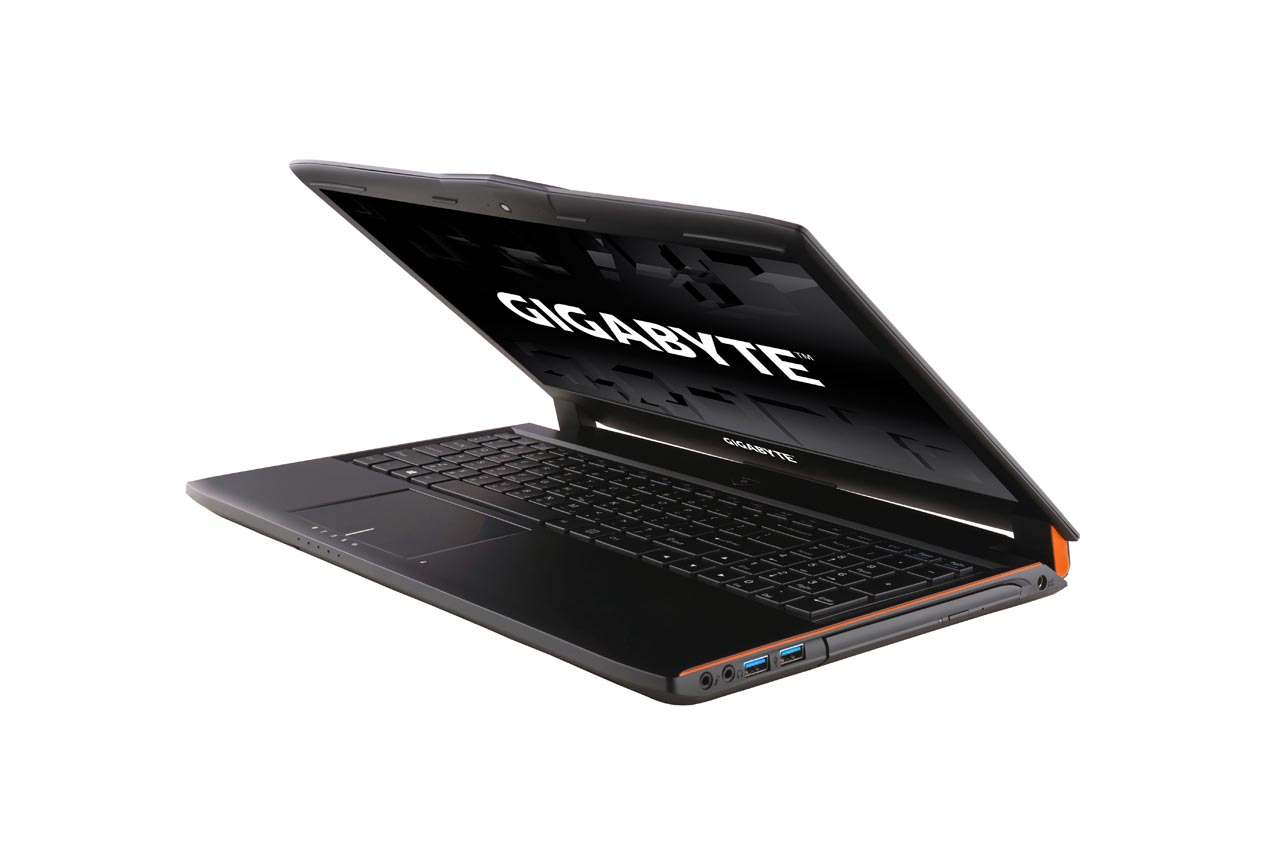 Today we’re looking at a mid-range gaming laptop from Gigabyte. It’s the P55K v4, and it offers a fifth generation Core i7 CPU paired with a mid-range (yet recent) GTX 965M GPU. That should provide good performance, but how does the rest of the laptop stack up? 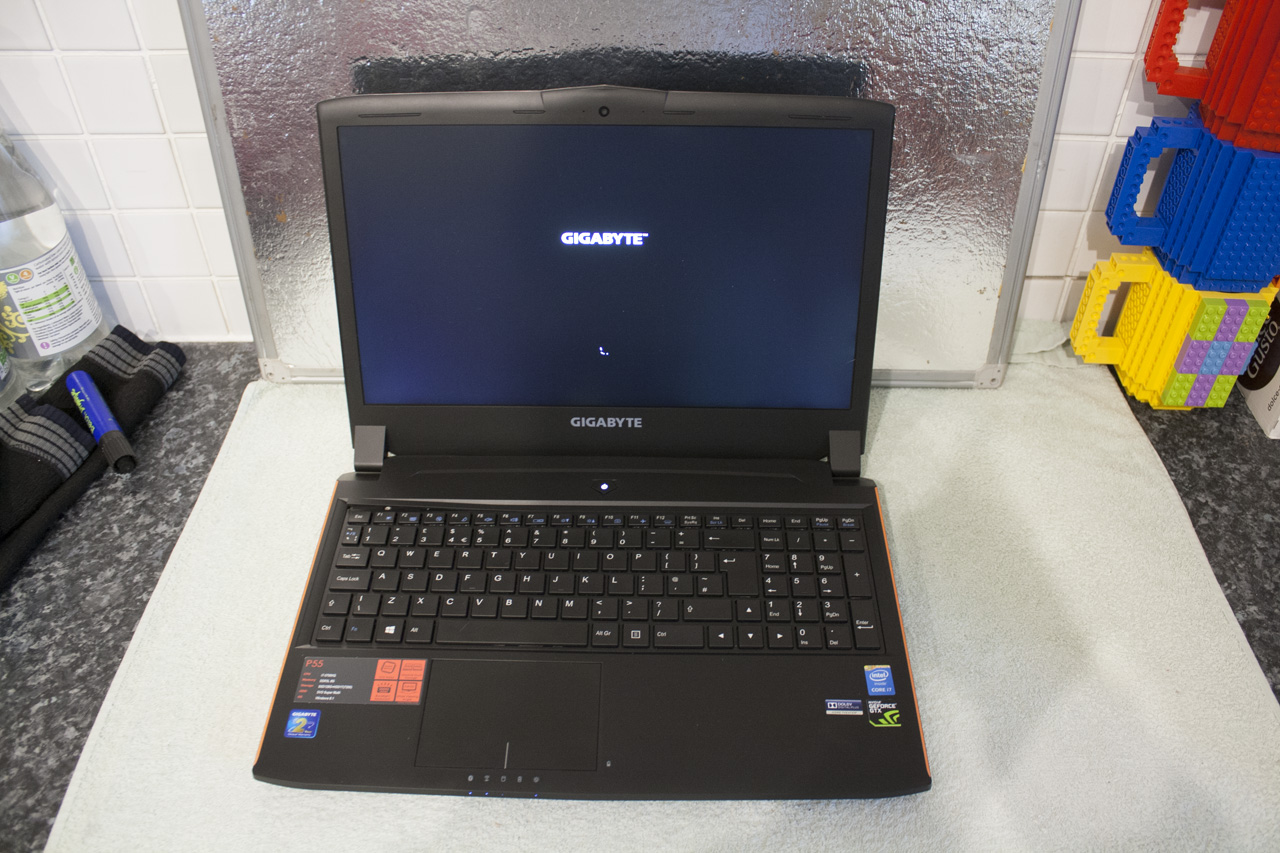 The P55K adopts a similar design to its Gigabyte gaming brothers and sisters, but it’s a bit chunkier than the high-end fare that we normally see on XSReviews. For example, the P35X has the same size screen and similar specifications, but measures just 20mm thick. This laptop reaches 34mm at its thickest point; not quite the titanic gaming laptops of yore, but still substantial. This is ameliorated somewhat by the light plastic build, which keeps the P55K at a similar curb weight to its high-end competition.

The display is a 1920 x 1080 (Full HD) LCD, with good viewing angles and reasonable colour reproduction. The resolution ensures that we don’t have to deal with Windows scaling, without text or icons looking too pixelated. In-game, we should expect reasonable performance at the native resolution, which is a nice advantage over higher DPI screens that often have to run at 1080p or similar to ensure a stable 60 FPS. 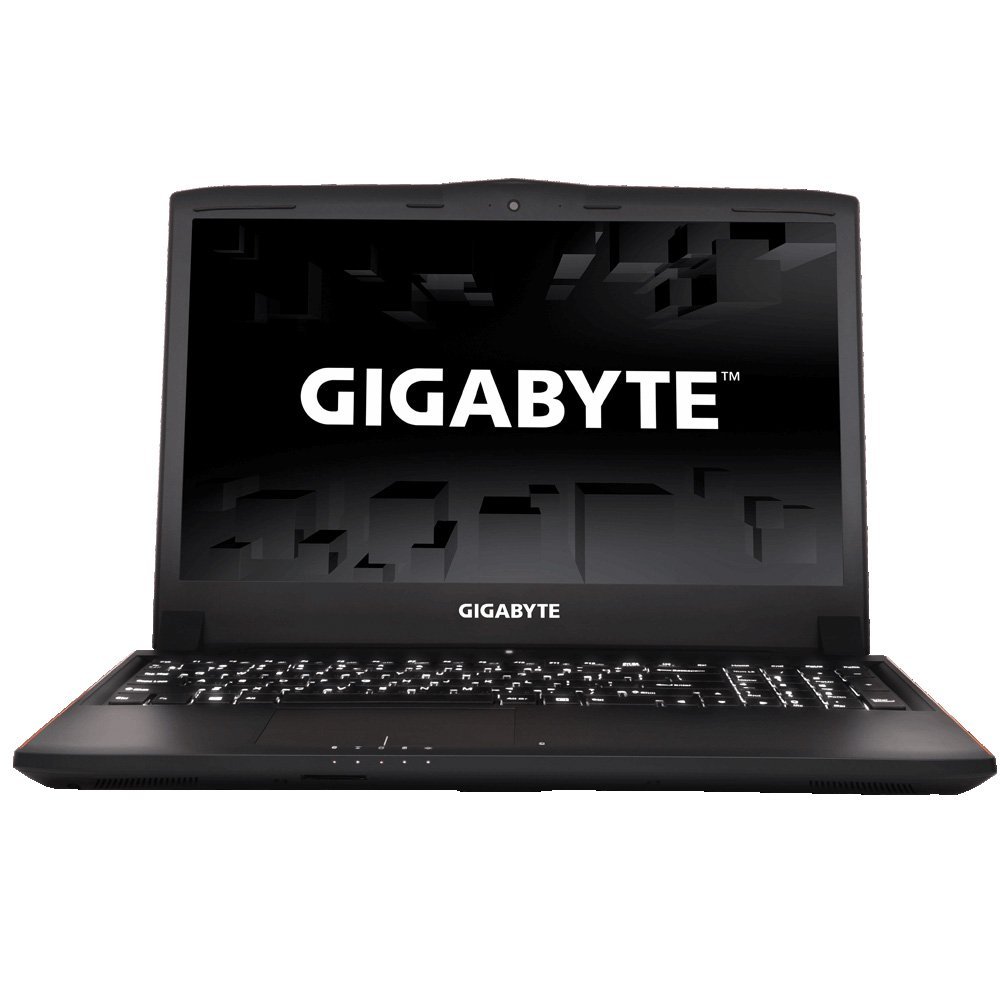 The keyboard is expansive and sensibly arranged, with good travel in the keys and backlighting – handy for late night gaming! We have the usual arrangement of function keys along the top, with full-size arrow keys and a number pad tucked on the right. 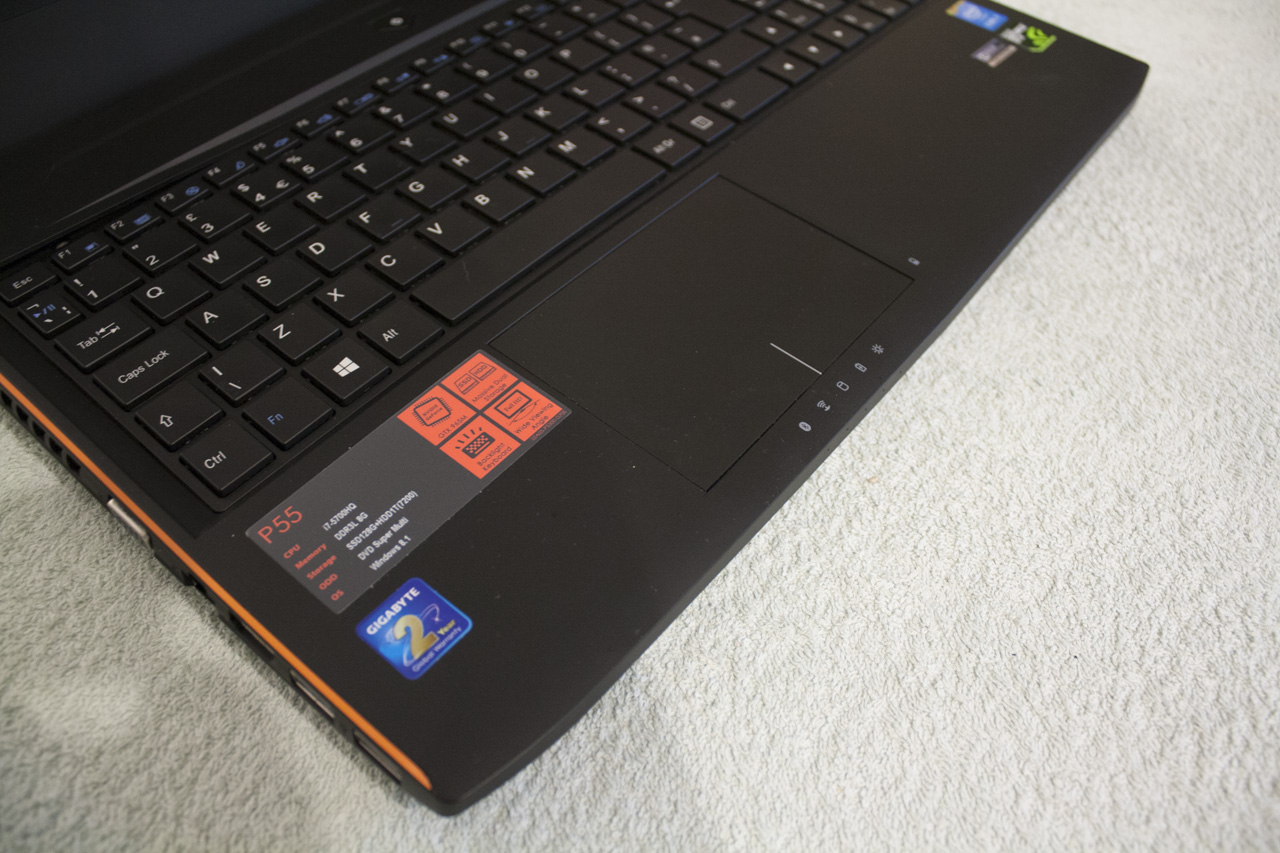 Below the keyboard is the large trackpad, which works well enough for mousing, tapping, clicking and two-finger gestures like scrolling. You’ll likely be plugging in a mouse for your gaming (unless you’re really skilled), but it’s nice to know you can get around the web and Windows without issue.

Just above the keyboard we have an unusual pentagonal power button, which is happily less bright in real life than it appears in the photo below. 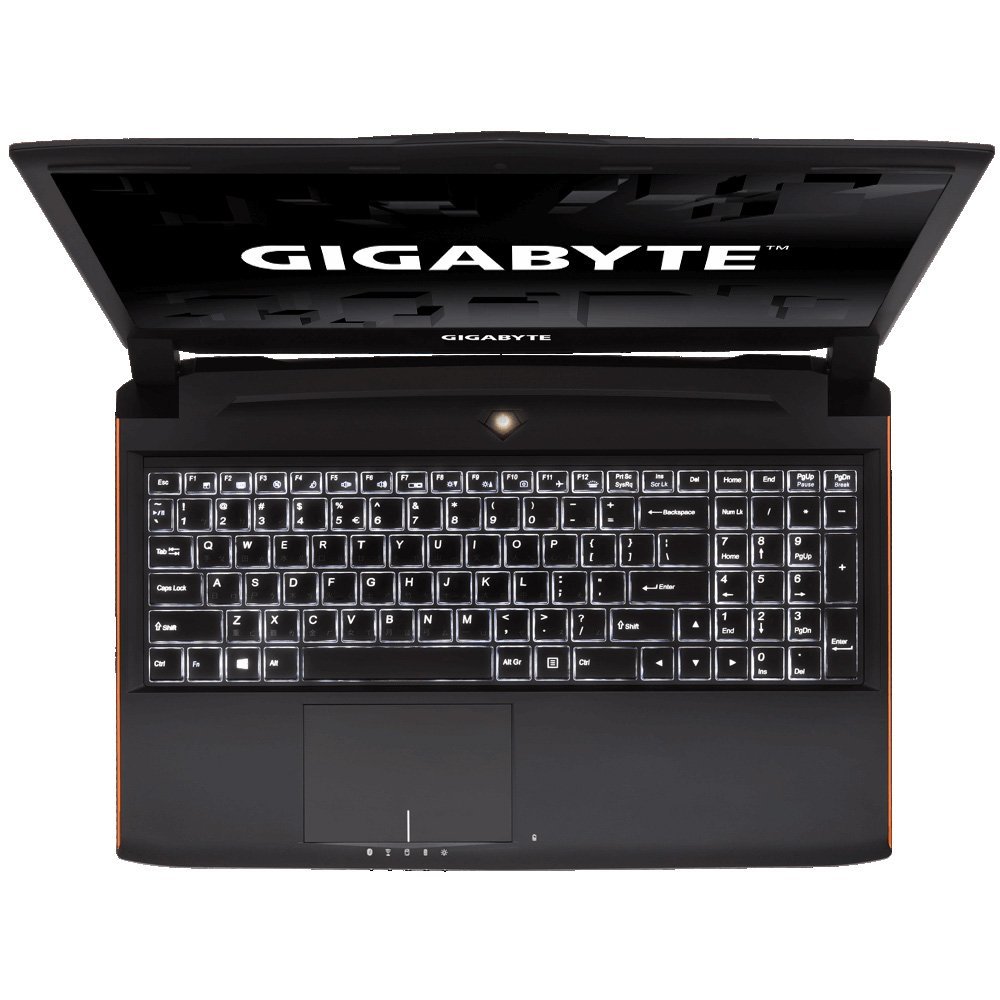 In terms of ports, the P55K is well endowed. We have a full quartet of USB 3.0 ports, two on either side, plus VGA, HDMI, ethernet, headphone and power inputs. There’s also a DVD-RW drive hanging out on the right hand side. Finally, there’s an SD card slot on the front.

The laptop is largely rectangular, but does have a slight prow to the lid for added flair. The P55K isn’t a bad-looking laptop, but I hope you’re a fan of that orange trim. I am, but my mother would hate it (if she was looking for a gaming laptop, of course). 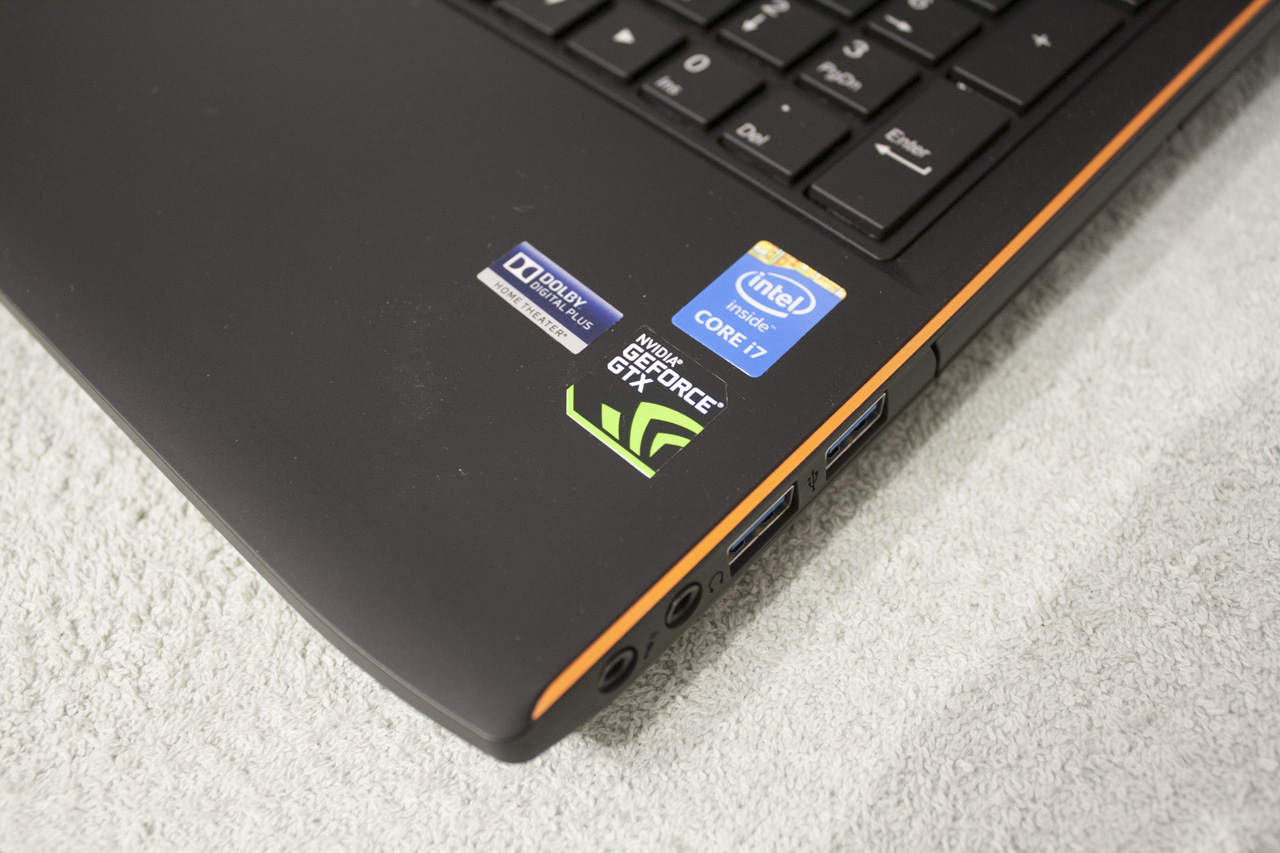 Despite its plasticky appearance, the P55K still feels solid in-hand. It’s not as dense as a typical high-end gaming laptop, but it seems durable and should survive to obsolescence. 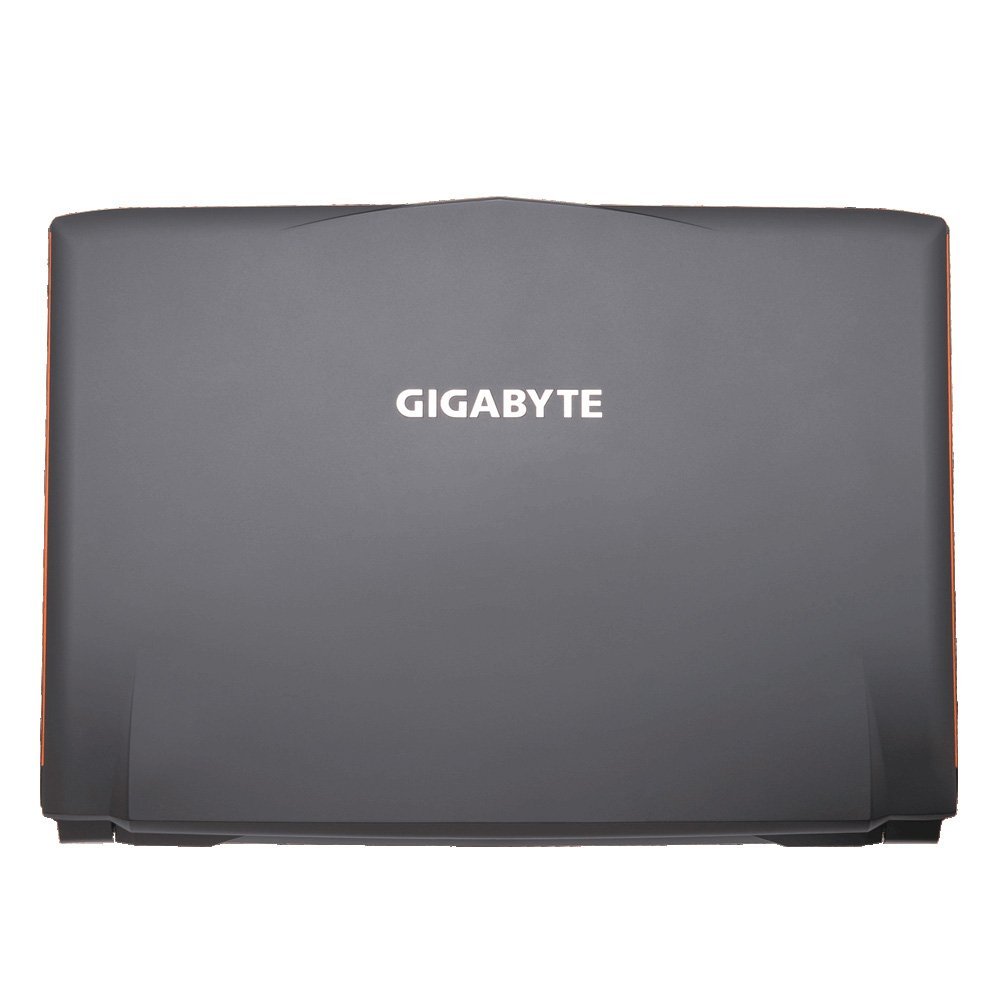 We’ll give the laptop our usual battery of benchmarks, followed by first-hand use for gaming, writing and surfing the web. Let’s get started! 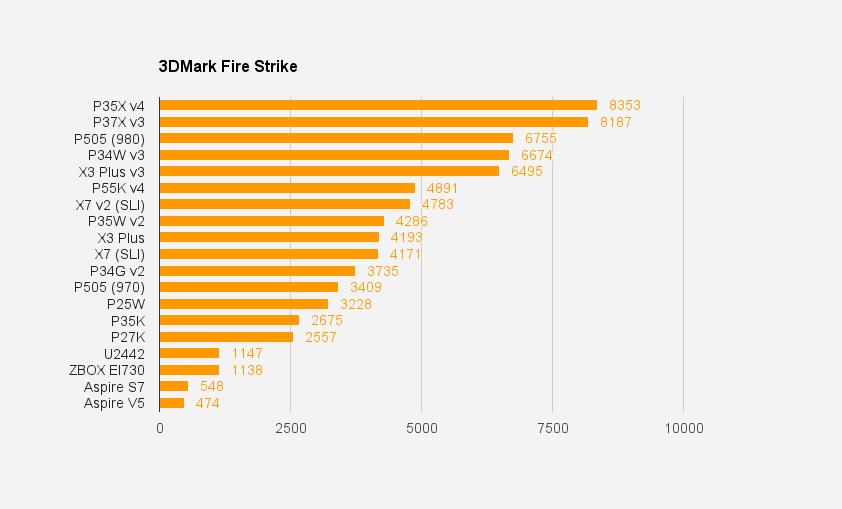 3DMark is our first test, and here we can see reduced performance compared to (admittedly more expensive) laptops, including Gigabyte’s most recent ‘X’ models. The P55K has a mid-range GTX 965 GPU, and that makes an impact in graphically demanding tests. Still, the laptop out-performs higher-end models two years ago, showing how quickly performance trickles down. The recent, high-end CPU no doubt helps here. 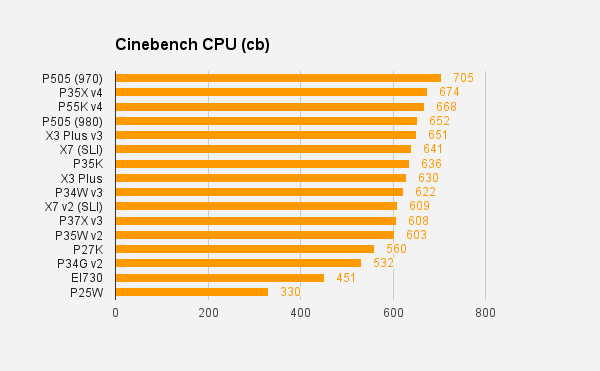 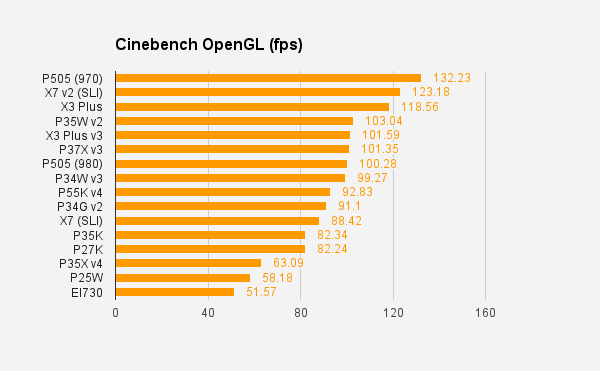 Cinebench’s OpenGL test shows similar results, with the P55K coming in the middle of the pack due its less powerful GPU. The CPU test, on the other hand, correctly shows the laptop’s strength. Games that demand higher CPU performance will play well on the laptop, while those that demand graphical grunt will do less well, but still OK. 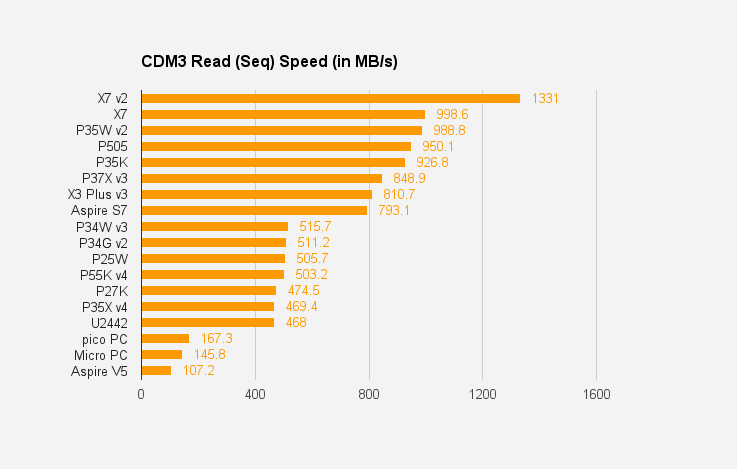 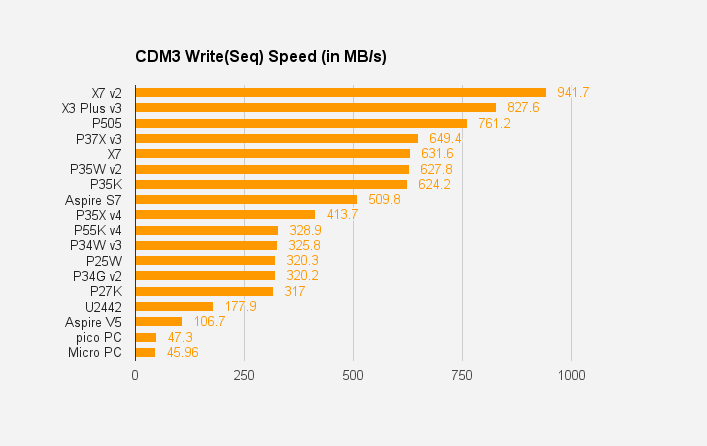 In terms of disk speed, we see a single SSD is much faster than a mechanical drive, but not as fast as a pair of SSDs working together or an SSD with a faster PCI-e connection to the motherboard. Still, the performance is perfectly adequate for gaming. 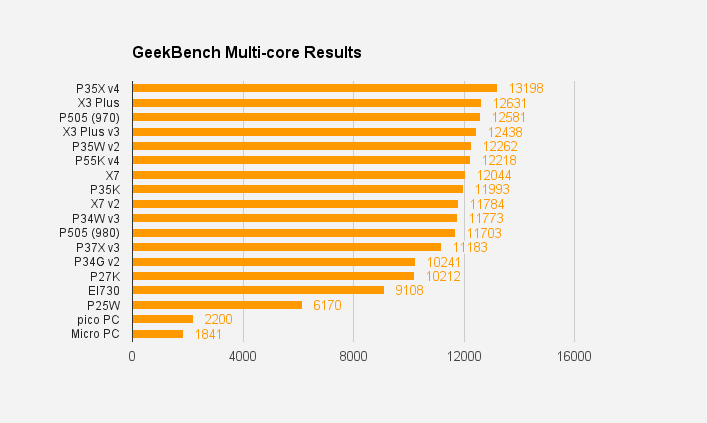 GeekBench again reinforces the CPU results; this is a pretty fast laptop when it comes to CPU performance, equalling or besting much more expensive machines. Now let’s move onto some games. 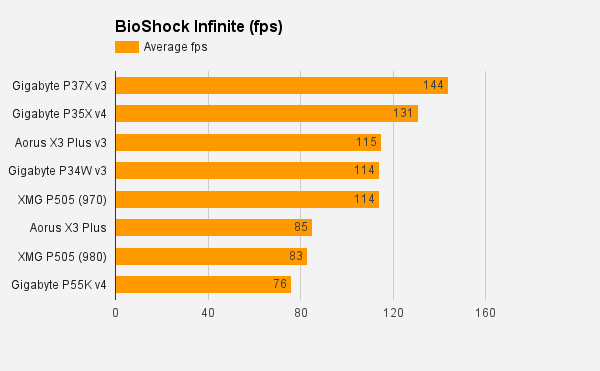 Our first title is not so demanding: BioShock Infinite. Like other Unreal Engine games, it relies more on the GPU side of the equation. That means poorer performance for the GTX-965-equipped P55K, although the result (76 fps at high settings, 1080p) is still more than playable. 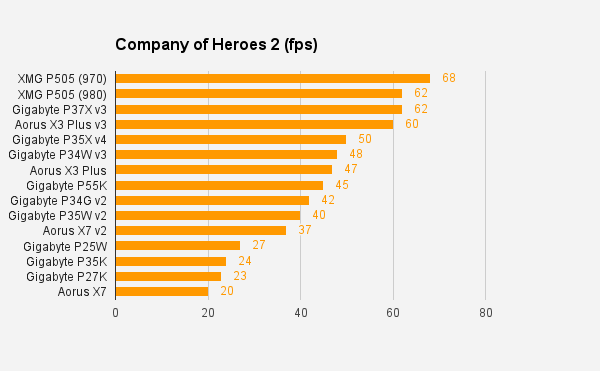 Company of Heroes 2 relies a little more on CPU performance, and doesn’t benefit from multiple GPUs. For that reason, the P55K turns in a decent result of 45 fps; more than playable given the overly demanding nature of the benchmark. 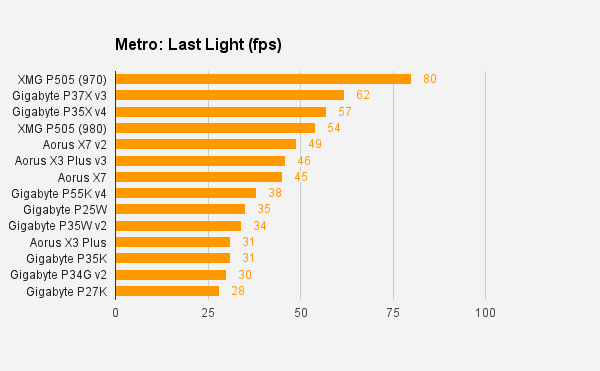 Metro Last Light does take advantage of multiple GPUs, and we see that reflected in the results here. The Aorus X7 laptops outperform the P55K despite their earlier release, with the P55K ending up near the middle of the pack at 38 fps. 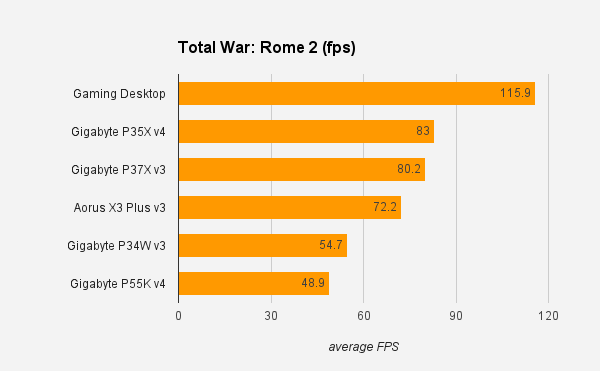 Our final test is Total War: Rome 2 at demanding Ultra settings. The P55K v4 does pretty poorly here, ending up below 60 fps. You’d probably want to knock settings down to High for adequate performance. Still, it’s not a terrible result for a fairly recent game.

And now for our hands-on impressions, after having spent a couple of weeks gaming on the P55K (not straight, of course).

In games, the P55K felt up to the task. I did have to turn down settings to medium or high to maintain that 60 fps standard at 1080p in some games (like Fallout 4 and Total War: Rome 2), but thankfully going below native resolution was never needed. Older games will run just fine here, and even the newest titles are playable if your visual settings are negotiable. 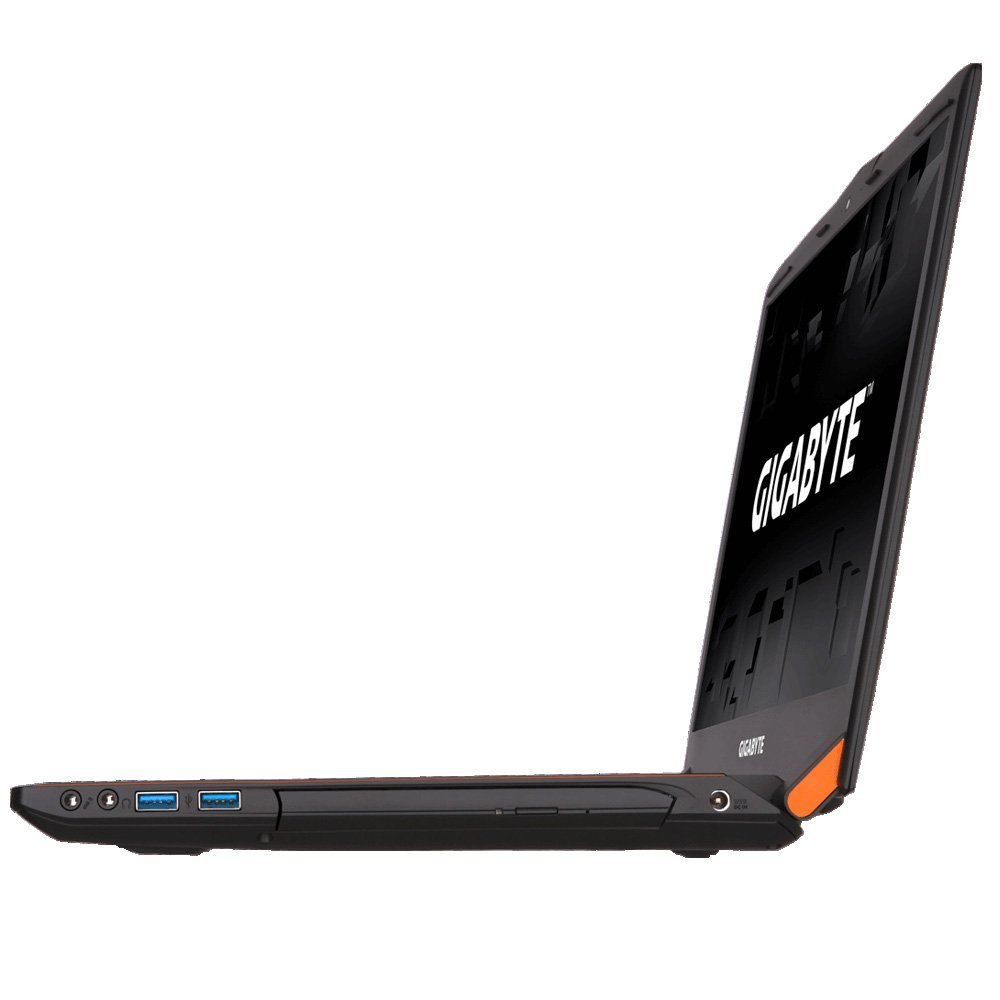 I played a few matches of competitive Counter-Strike with just a mouse plugged in, and didn’t face any deficit in CPU or GPU performance. The screen is big enough to see clearly (although long range shots are a little easier on a 35-inch monitor), and the keyboard felt up to the task too.

One drawback I didn’t expect was Wi-Fi performance. I experienced some hitching in online Counter-Strike matches, which I believe are down to the use of Wi-Fi N standard instead of the more modern Wi-Fi ac. The problem didn’t come often, but did make a few matches unnecessarily difficult. You could always use the gigabit ethernet instead, but that rather takes away from the portability a gaming laptop should offer. It’s unfortunate that a 2015-era laptop is limited to a 2009-era standard. 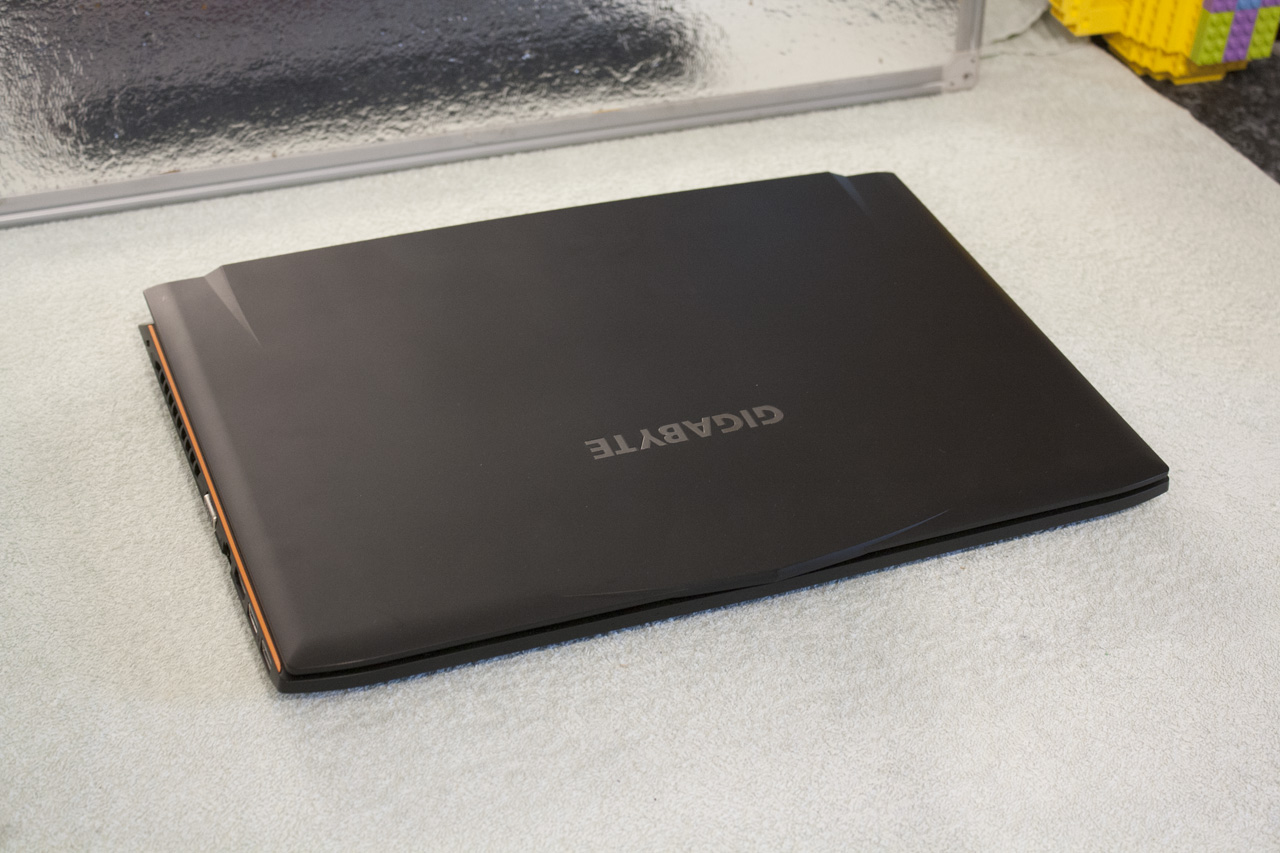 Otherwise, there’s little to really criticise the P55K for. The GPU performance is of course not up to the standard of a GTX 970 or 980 machine, but it is still better than flagship laptops of earlier generations. Having the latest (if not greatest) CPU from Intel definitely helps as well. For all but the latest games, you should have no worries gaming in style on the P55K.

The P55K is a capable media machine, thanks to its gaming heart. It’s no surprise that a machine that can handle Fallout 4 or Counter-Strike can also throw up spreadsheets or a few dozen tabs in Google Chrome like a champion. But the P55K gets the smaller stuff right too – the keyboard has a good layout and decent travel, no problems there. The trackpad is good as well, handy when you don’t have a mouse at hand.