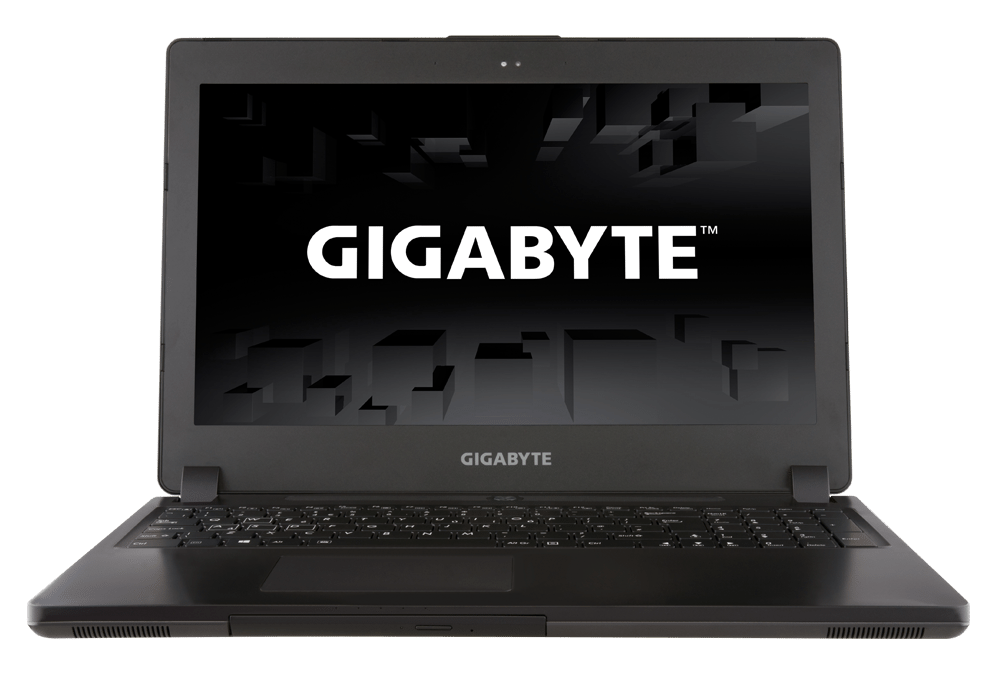 Every year, dozens of new processors and graphics cards are released. It’s an opportunity for hobbyist PC builders to upgrade to new levels of performance, and the same is true for professional laptop makers. Gigabyte are no exception, and they’ve updated their P35 gaming laptop to include the latest Intel processors and Nvidia graphics cards. We’ve got the new P35W v2 in this week, so let’s see how it compares to its predecessor and other gaming laptops on the market.

Specs given are for the review unit received; different configurations are available depending on region and retailer. Operating system, CPU, RAM, display, storage and optical disk drive can all be changed. CPU can be 4700HQ or 4710HQ. RAM can be 4, 8 or 16GB. Display is fixed at 1080p and 15.6″, but ‘wide viewing angle’ and regular options are available. Storage options include up to 4 drives, including multiple solid state drives. The optical disk drive can be upgraded to a Blu-ray writer.

The changes from the P35K are fairly self-evident and mainly limited to CPU and GPU. A higher-spec 4th generation Intel processor is used, with frequency climbing from 2.4 to 2.5GHz, while the GPU change is more substantive: a GTX 765M with 2GB RAM is exchanged for a GTX 870M with 6 GB RAM. A mini-DisplayPort has also been added. Otherwise, the two machines are near-identical in terms of looks, dimensions, weight, ports and internals.

For this reason, this review will examine these hardware changes only; for a more general review of the machine’s packaging, physical features and usability, please read the original Gigabyte P35K review.

In order to best examine the difference in performance from one generation to the next, we’ll be keeping a similar testing methodology that we used on the initial P35K. That means playing games like Counter-Strike GO, Battlefield 4 and StarCraft II. Additional tests will also be performed in Diablo III: Reaper of Souls and Heroes of the Storm, alongside traditional benchmark games Company of Heroes 2 and Metro: Last Light.

Blizzard games like Heroes of the Storm, StarCraft II and Diablo III all ran well on the Gigabyte P35W v2, reporting frame rates in excess of 120 at medium graphical settings and easily 60 fps on high. More challenging games like Battlefield 4 and Company of Heroes 2 showed more impressive performance, with the improved GPU allowing the games to run smoothly between 40 and 60 fps even during intense multiplayer matches.

The P35W v2 gets very loud while in games, and produces a fair amount of heat as well; it seems its cooling arrangement isn’t sufficiently good to allow for lower RPM settings. The fan noise was variable though; simpler games running at lower graphical settings more much more tolerable. If you’re planning to run graphically demanding games on the laptop, then picking up a good set of headphones might be a good idea.

I also ran into a few audio bugs while testing the laptop, namely that the sound sometimes cut out entirely for no reason. I experienced similar issues on the P25K, and it’s disappointing that these haven’t been fixed in the next model.

These issues aside, the P35W v2 is an impressive gaming performer for the money.

3DMark is a popular cross-platform test of graphics and physics, in a manner that approximates a typical game at three different challenge levels. Ice Storm is designed for mobiles / low-end PCs, Cloud Gate is for notebooks / desktop PCs and Fire Strike is for gaming desktops. We’re using the latest x64 version of the benchmark from Steam.

3DMark also recently added a new fourth benchmark for gaming laptops called Sky Diver. The P35W v2 received a score of 14297 here, which will be included in future tables once I can test another machine on the same test.

The results here are a solid indication that the new P35 is a worthwhile upgrade from its predecessor. The P35W v2 approaches the dual-GPU Aorus X7 in performance, and even beats that notebook in the most demanding Fire Strike benchmark. It’s an impressive result for sure, and a good indicator of the advances that Nvidia have made with their latest generation cards. 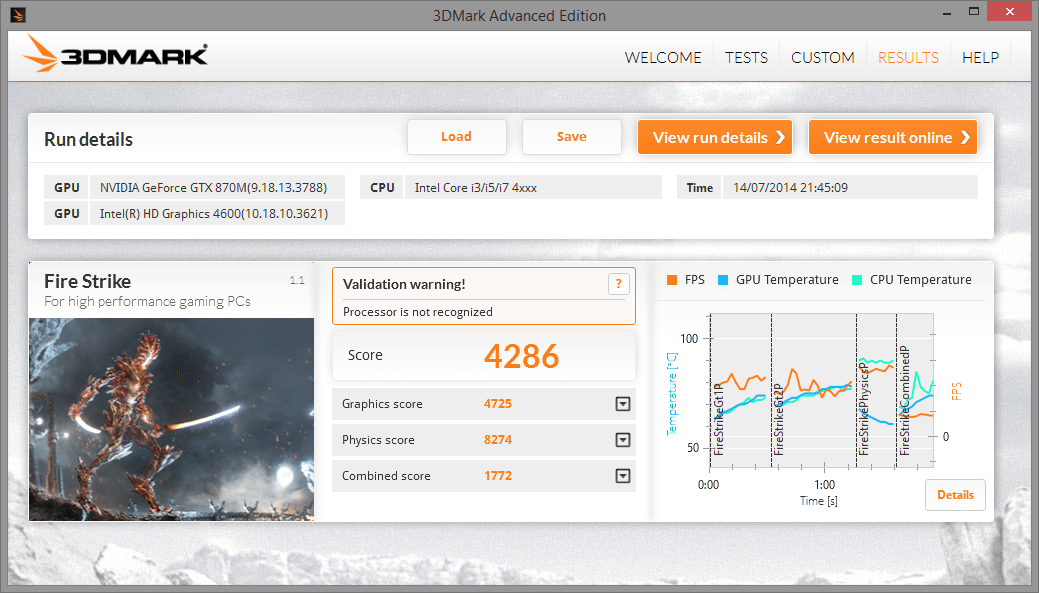 Again we see considerably higher results here than even with the Aorus X7’s dual-GPU setup. Frame-rates are about 25% higher compared to the previous generation P35K, while the CPU score is about the same. That suggests that if you’re struggling with CPU-bound games on the P35K, you won’t see a large enough performance increase to justify the upgrade. In contrast, for GPU-bound games (which is most of them), then the 25% increase in OpenGL FPS will likely offer a considerably smoother experience over the P35K. 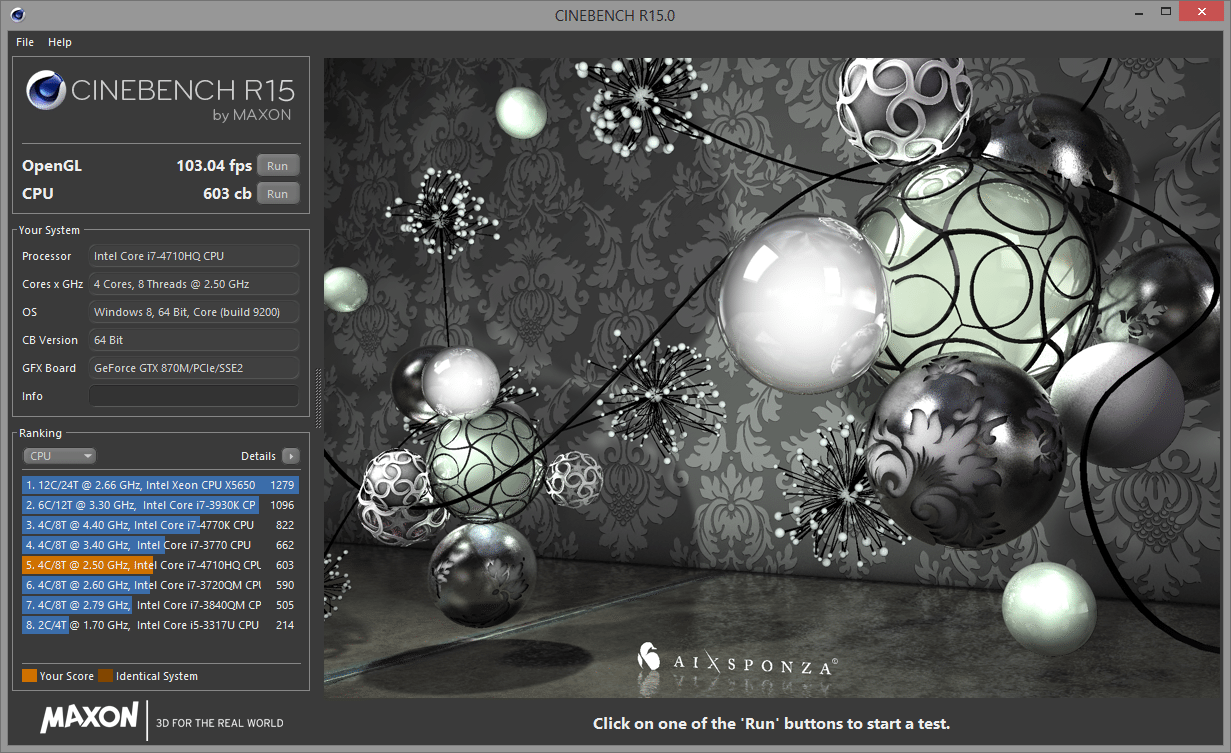 CrystalDiskMark is a benchmark that examines disk read and write performance of the solid state drive.

This benchmark is more of a sanity check than anything else; we’d expect to see similar scores to the other RAID0 machines in our history, like the Aorus X7. And indeed, we do see very similar scores here. 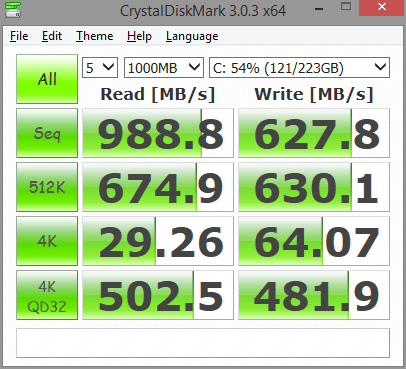 GeekBench is another cross-platform benchmark that examines memory and processor performance. As previously, I’m using version 3 of the benchmark.

This is a CPU and memory test, so we’d expect to see similar results given the small bump in specs in the P35W… and true to form, we do see exactly that. 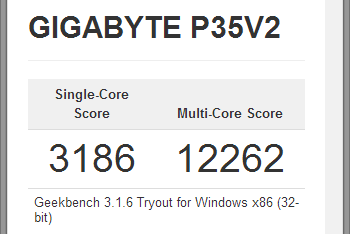 Metro is a challenging game, both on you and your PC. Its benchmark tool is quite formidable, so let’s take a look at how the X7 performs in an actual game. The settings are Direct X 11 renderer, 1920x1080p, High quality, AF 4X filtering, normal motion blur, no SSAA, DirectX 11 tessellation or PhysX. 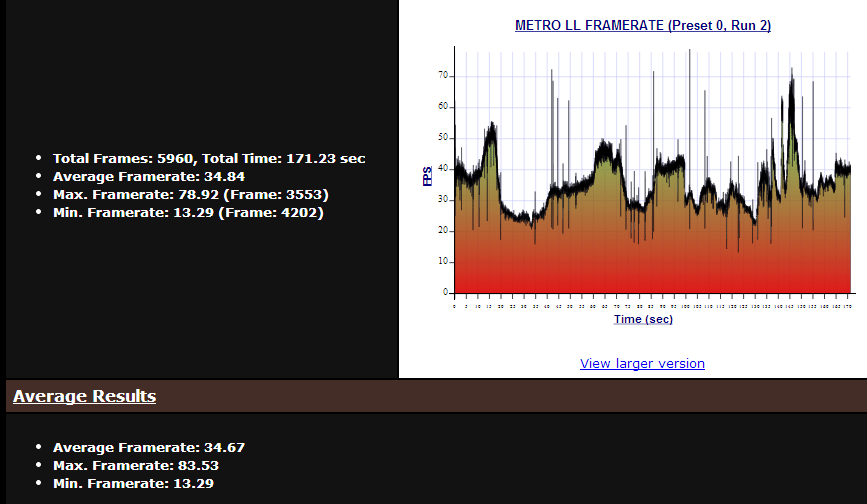 Here we see a slightly better result compared to the P35K – 34 fps compared to 31 fps. This small difference is typical given the CPU-bound nature of Metro: LL.

Our final benchmark is Company of Heroes 2, an excellent strategy game centred around the Eastern Front of WW2. The game includes a robust worst-case benchmark, so if the game is playable here then you’d expect much better results in actual singleplayer or multiplayer. A large update was recently released, but tests on my main gaming PC don’t seem to indicate any changes in benchmark performance.

An average FPS of 40 was surprising here; that’s the same score I received on my gaming PC. As mentioned before, CoH 2 doesn’t make use of a second GPU, so generally we see the best results from machines with a single good GPU. That fits the P35W v2 quite nicely, and we can see this impressive result because of it.

By comparison, the previous Gigabyte laptops tested recorded scores of 24, 26 and 20 – so 40 FPS is a massive improvement here.

The Gigabyte P35W v2 is a better-than-expected upgrade over the previous generation P35K, offering good gaming performance for around £1200. Thanks to a significant boost to GPU performance and a slight CPU boost as well, the laptop is capable of handling even intense games at its native 1080p resolution and medium to high settings. While some flaws remain from earlier models – including a mediocre keyboard, considerable fan noise and middling battery life – the P35W v2 is a great choice for gamers. 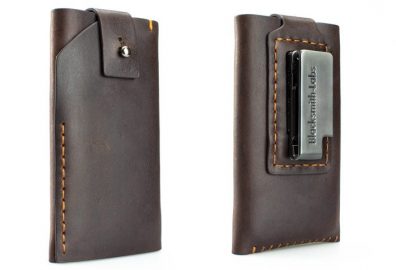 A few weeks back I was sent a leather smartphone holster from Blacksmith-Labs. The case is meant to be a...