The Gigabyte P27K comes in a rather attractive black-and-orange box, to match the look of the orange laptop within. The front and back covers are identical. They show that the laptop was proudly made in Taiwan, with both colour options pictured alongside a message saying “Performance Unleashed: Releasing unprecedented performance with stunning visual enjoyment, in compelling audio festivity.” It’s not entirely precise English, but the media focus is clear.

On one side, we have the specifications (as listed above) for this particular unit. Hilariously, the OS is listed as “Free DOS”! Inside we have the laptop itself, well armoured against impacts with foam and against scratches with a thin synthetic cover. The other contents of the box are the power adapter and a plastic ziplock bag with the manuals and CD-ROMs inside.

The P27K is a much more obvious gaming laptop than the more professional P35K, with an aggressive angular look. The orange colour is definitely attention-grabbing, with everyone that wandered past my desk asking what laptop I had got this week.

The lid isn’t flat as with most laptops; instead it has some angular lines leading to a raised line at the rear end. The difference in thickness isn’t significant, but it does create visual interest. 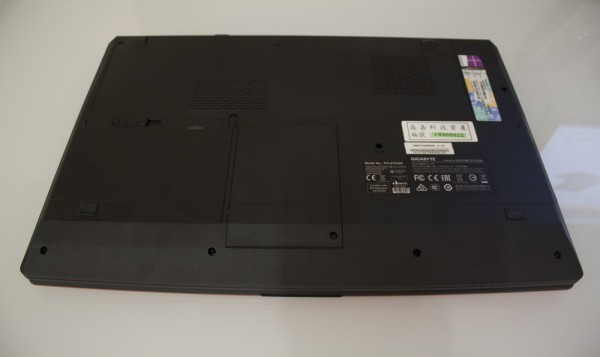 The bottom of the laptop has sloped sides, not unlike a Soviet T-34 medium tank. This makes the laptop look a little thinner, while maintaining a relatively high volume. On the bottom we have two large vents for the CPU and GPU, the removable battery and a screw-secured compartment. There was nothing in this compartment on the review unit, so I expect the secondary mechanical disk drive would be installed here.

Opening the laptop, we have our first look at the screen, keyboard and touchpad – and thankfully, no annoying stickers whatsoever. The display is 17.3″ along the diagonal and 1080p, a fitting resolution for a media machine. The screen is a TFT LCD – not the IPS of the P35K – but viewing angles are still decent and colour accuracy is about average. The size of the screen makes it a fine desktop replacement, and certainly will work for watching movies with a small group of friends as well. A 2.0 megapixel webcam sits above the screen, while the word Gigabyte sits below. 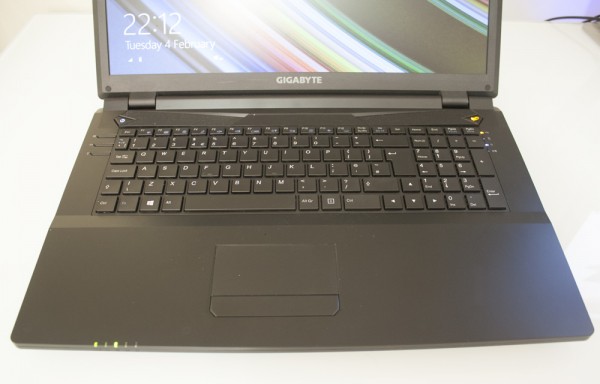 Looking now at the lower part of the machine, we can see small angular flourishes that mimic the lid. The power button and graphics switch buttons are quadrilaterals, set inside the stereo speakers above the keyboard. To the left of the keyboard we have three buttons for common media functions; on the right we have four status indicator LEDs.

The keyboard makes full use of the space available, with full-size keys (apart from a thinner Function row) and a numberpad. The layout is quite standard for a 17″ laptop, with cursor keys tucked between the numberpad and the main board and the insert/delete cluster placed on the Function row. The key travel is sufficient here, although the keys do feel a bit mushy. The island-style keys are square and flat. It’s not my favourite laptop keyboard (that honor would go to the recent MacBook Pro 15), but it’s definitely up there.

Centred below the main portion of the keyboard we have the touchpad, a nice size and with a dedicated left/right click bar. The touchpad is much better than that of the P35K, but it’s still not great. I had an odd issue where occasionally the cursor would drift straight left, right, up or down for a few seconds upon a touch. This bug aside, the touchpad was fairly accurate and easy to use – although a mouse is essential for any gaming.

Many 17″ laptops outdo their 15″ cousins when it comes to ports, and the Gigabyte P27K is no different. There were four USB ports here, with a pair of USB 3.0 ports, an eSATA/USB 3.0 port and one USB 2.0 port. The laptop includes both HDMI and VGA, plus three 3.5mm stereo jacks for hookup to a surround sound system, which is a nice touch for a media-focused machine. We also have the full range of communication standards, both wired and wireless: 802.11n, gigabit ethernet and Bluetooth 4.0. Finally, there’s a 9-in-1 card reader that should support basically any common smartphone / camera / camcorder card on the market.

With that, our look at this laptops’ physical features concludes. Let’s move onto the fun part – testing!

Tech21 are a mobile phone accessories company that take a scientific approach to protecting your phone from...

CES in Las Vegas is a cavalcade of consumer electronics for the year to come, with thousands of products from...