But it’s not perfect…

There isn’t a massive amount of balance in Gimbal, with the only real implementation being lower rewards for taking down weaker players and bots, higher rewards for taking down stronger players; there’s no skill-based match-making or anything like that. Still, the rewards system does provide an impetus for keeping your ship’s cost down and not just bolting on everything you can. 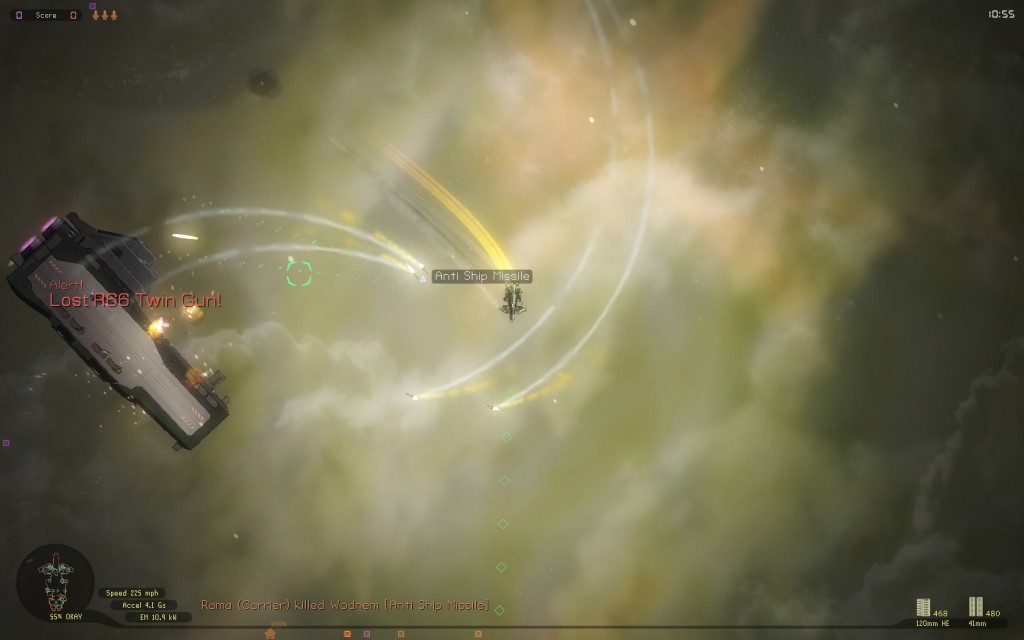 Carriers can quickly remind you how frail you craft is

Ultimately, there’s not much wrong with Gimbal. It broadly achieves what it sets out to do, and as a multiplayer space combat arena with buildable vessels I haven’t seen better. There are some areas that could be improved or added to – for example, how about a singleplayer adventure mode where players leapfrog between carriers, fighting enemies in between and gradually building up their starship?

One more I really want to see though are race maps. Basic weaponry only – or none at all even – with very difficult to maneuver levels. The first one to reach the goal alive is the winner. This would really open up new design options for the game, beyond simply who can fit the most heavy artillery pieces to their gun platform.

The game still has yet to really take off; while there are well populated Reddit and 4chan servers, you’ll typically find only about a dozen non-empty servers running at once. While Gimbal is still quite new, I feel that perhaps the primary reason that the game isn’t more popular is the price – while $15 (£10) is still much lower than retail titles, when I can pick up the latest Call of Duty for roughly twice the price (£22) then it feels a little too high.

The game’s website proudly states its indie credentials and its policy of ‘you bought the whole game, you get the whole game’, but I feel that a time or feature limited demo would be a good introduction and bring in a few more sales. With more players, more servers and more inventive ships this could be a much more compelling experience. Hopefully with the addition of the game to Steam Greenlight we’ll see moves in this direction, so go and vote for it.

Despite the few drawbacks, Gimbal is a brilliantly made title and an impressive first-time effort from a one man studio, so have a look at the embedded trailer on and give it a go. If you’re a fan of space combat and ship building then I heartily recommend it.