Space Warfare at its best

I’ve got two big loves in video gaming: multiplayer shooters and spaceship creation. The former has a near constant indulgence with series like Battlefield, Call of Duty and Team Fortress, but the latter is one that I haven’t really enjoyed since 1998’s Star Trek: Starship Creator. Never before have I experienced such a compelling crossover of the two genres as Gimbal, an indie title produced by Colin Clark’s 8888888 Labs in Michigan. 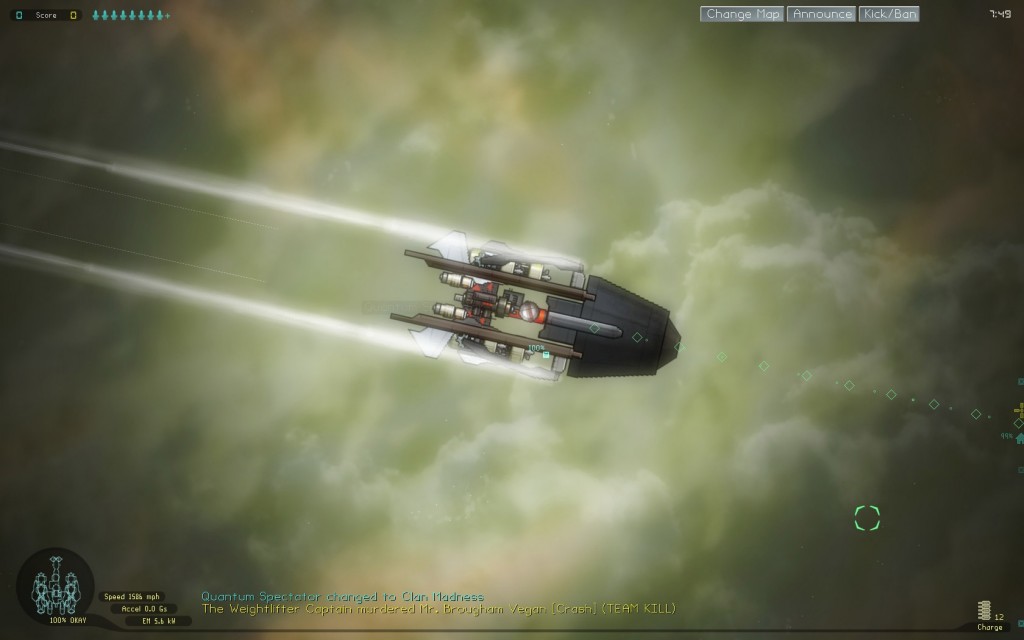 You enter the battlefield within a protective pod. It looks great, but occasionally you’ll hit other players on your team, something that could do with fixing.

Gimbal is a game where you can build your own spaceships in a similar fashion to other spacefaring games like Gratuitous Space Battles, then fight them against other player’s creations in multiplayer arenas, with player counts (with added bots) ranging anywhere from 3v3 skirmishes, to mass 20 v 20 wars. With each kill and round win, your budget increases and you can design increasingly powerful and specialised craft. There are a wide array of weapons, aerodynamic components and other subsystems you can add to your ship, and you’ll quickly outgrow the half-dozen stock designs that are unlocked near the start. As well as building your own creations, starships that you destroy will be added to your hangar as ‘stolen designs’, allowing you to quickly learn some new tricks from the old dogs.

The starship design component is surprisingly deep, with free placement of components and strict physics dictating your craft’s performance. You can add weapons to turrets and CPU systems to them, allowing them to be controlled with the mouse instead of the keyboard or to automatically track targets. While initially you’ll find your selection of parts limited and your budget restricting you to one or two guns, as the kills mount up you’ll quickly find yourself festooned with options, allowing the building of some truly bizarre looking creations. 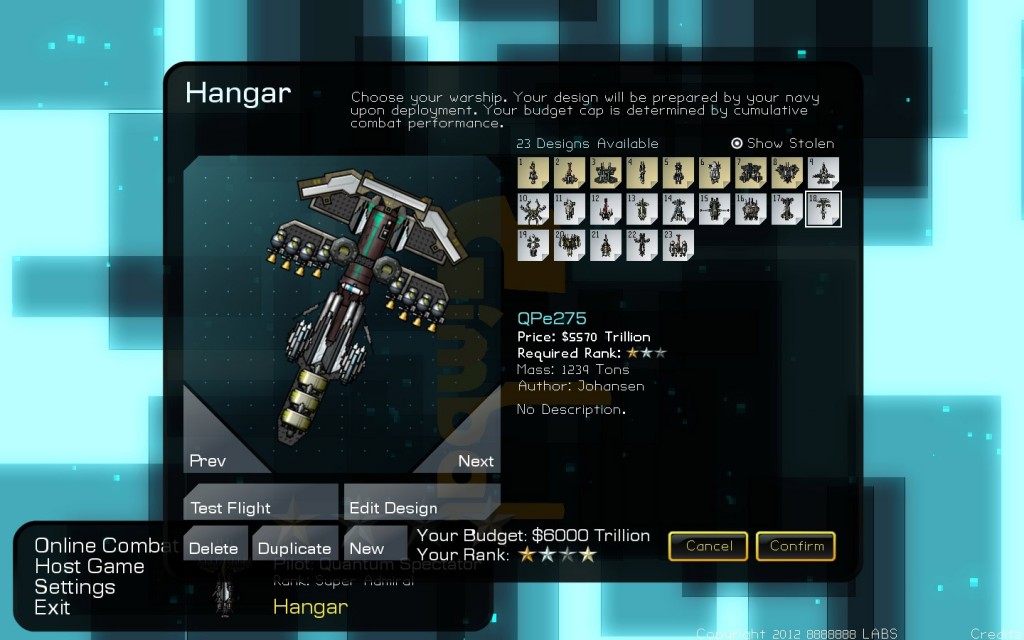 Armour plating comes into play when you level up, but can be a little overpowered when people really stack it up

Some of the standard designs might be one ship with a couple of forward facing guns and a couple of engines. Later on though, with faster hulls and a few more trillion dollars to spend, you’ll be able to invest in a streamlined platform, mounted with eight high powered engines and six turret mounted heavy 120mm cannons. This means you’ll be zooming around, making it very difficult for others to hit you, while peppering your foes with ease thanks to the 360 degree rotation of your turrets. There’s also options for simple gun platforms. Add a couple of engines for rotation and one for creeping forward and then cover the rest of the ship with fast firing guns. While you might be vulnerable to anyone that’s sniping you at range with rail guns or missiles, you’ll decimate any fast fighters naive enough to get within range of you.

However you’ll need to take propulsion design seriously. You can’t just stick a couple of engines on the back and hope for the best, every engine has a forward and back function which needs to be mapped to your preferred controls. There’s no left and right turning unless you add engines that can perform that function. Whether you mount them horizontally, or simply stick a vertical facing engine on the edges of your design is up to you. You also need to take into consideration things like drag, symmetrical mounting so that you don’t list to one side. There’s options for the inclusion of pop our air breaks for fast halts, fins to increase deceleration speeds and automatic engine control chips. If this sounds overwhelming, at first it is but you soon get the hang of it. Fortunately there’s a test area that lets you make sure you craft flies well – or at least can turn to face an enemy – before jumping into the action.

Once you get there, you’ll want to fight a few games againts bots first, as the learning curve is quite steep compared to some games. However, it’s not too long before you get the hang of it and as long as you don’t end up on a server with high end players – look for one with a spending limit for your first few PvP bouts – you should quickly begin to rack up kills. One good way to generate income is to try and take out the enemy’s carrier – a refuelling and arming station covered with high end weaponry – as taking one of them out gets you as much as killing some of the top players in the game. 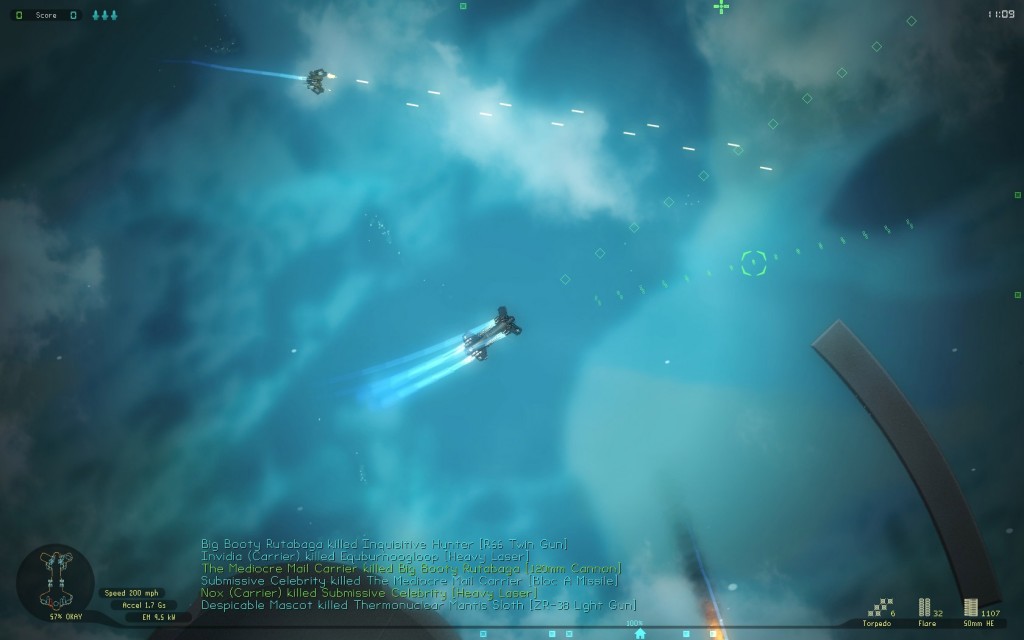 Gimbal can be very pretty. Damage features sparks and fire, blazing a trail behind your stricken craft.

Technically the game is impressive, with some beautiful low-orbit environments and lovingly designed 2D spaceship components. The interface is simplistic but works well, and the actual combat is fast and fluid although there’s a lot to learn. It’s just a shame that despite the great visuals, when zoomed in enough to appreciate them you will be easily outranged by your opponents, many of whom exclusively make use of the tactical view which lets you see far further afield. At that distance though, your ship is barely noticeable. It’s not one that I can see an easy way around, as if you decide you’re going to wing it and play with your screen close to your spacecraft, you’ll often not have enough time to dodge the static asteroids that make up the majority of mid-air terrain in Gimbal.