Smartphones and tablets are brilliant, but they’re always limited by one thing: power. No matter how shiny your device is, after a day or two you’ll be reaching for the charger. Today, we’re looking at two gadgets to help you on that point: the Intocircuit 15000mAh Power Bank and the iClever 6-Port Fast USB Desktop Charger. These come courtesy of top Amazon seller Hisgadget.inc. Let’s get started. 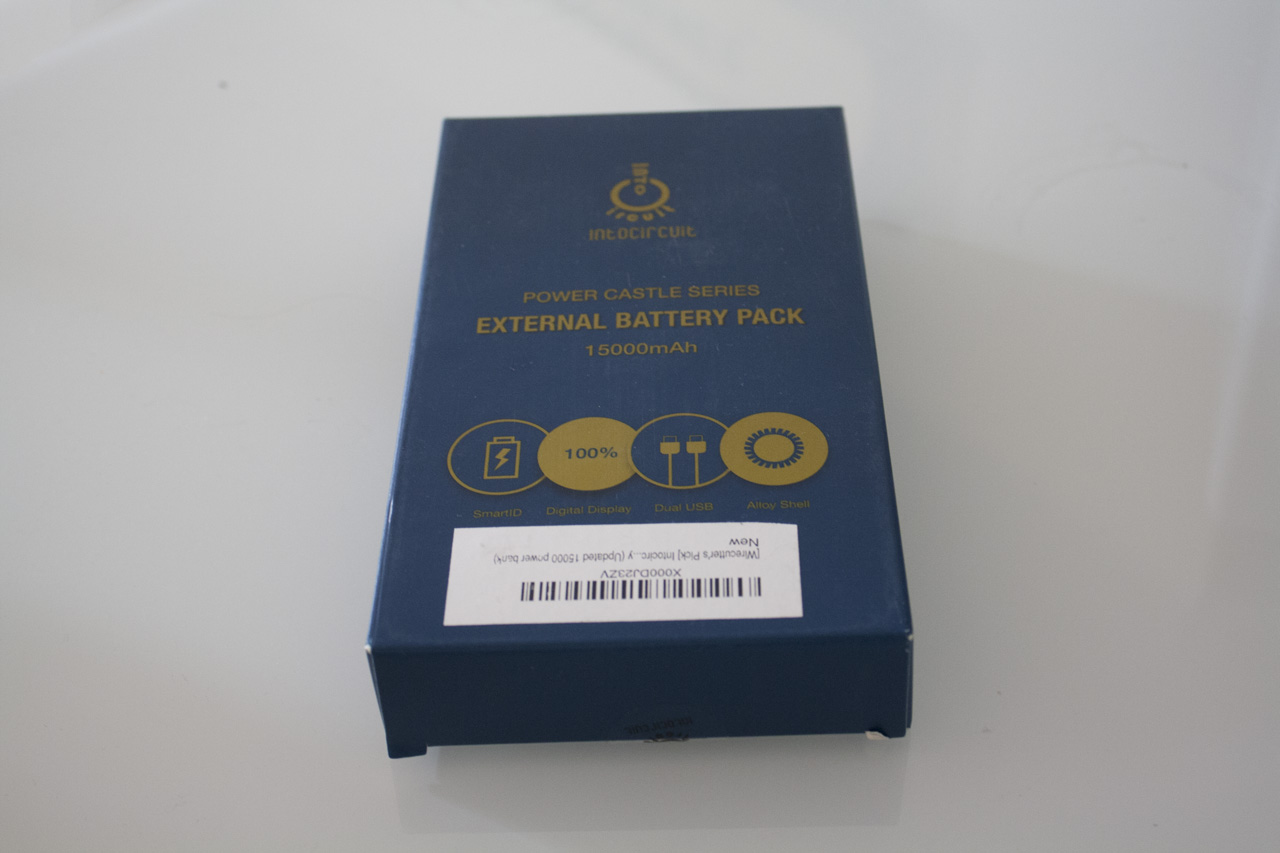 Let’s take a look at the Intocircuit first. This is a power bank or portable charger; however you want to call it, this gadget is capable of recharging your phone no matter where you are. It has a massive 15,000mAh internal battery, which is roughly five times the size of the biggest smartphone batteries. That means you can get a week’s battery life out of most phones without ever needing to return to a plug socket, or you can recharge a family’s worth of phones once over. 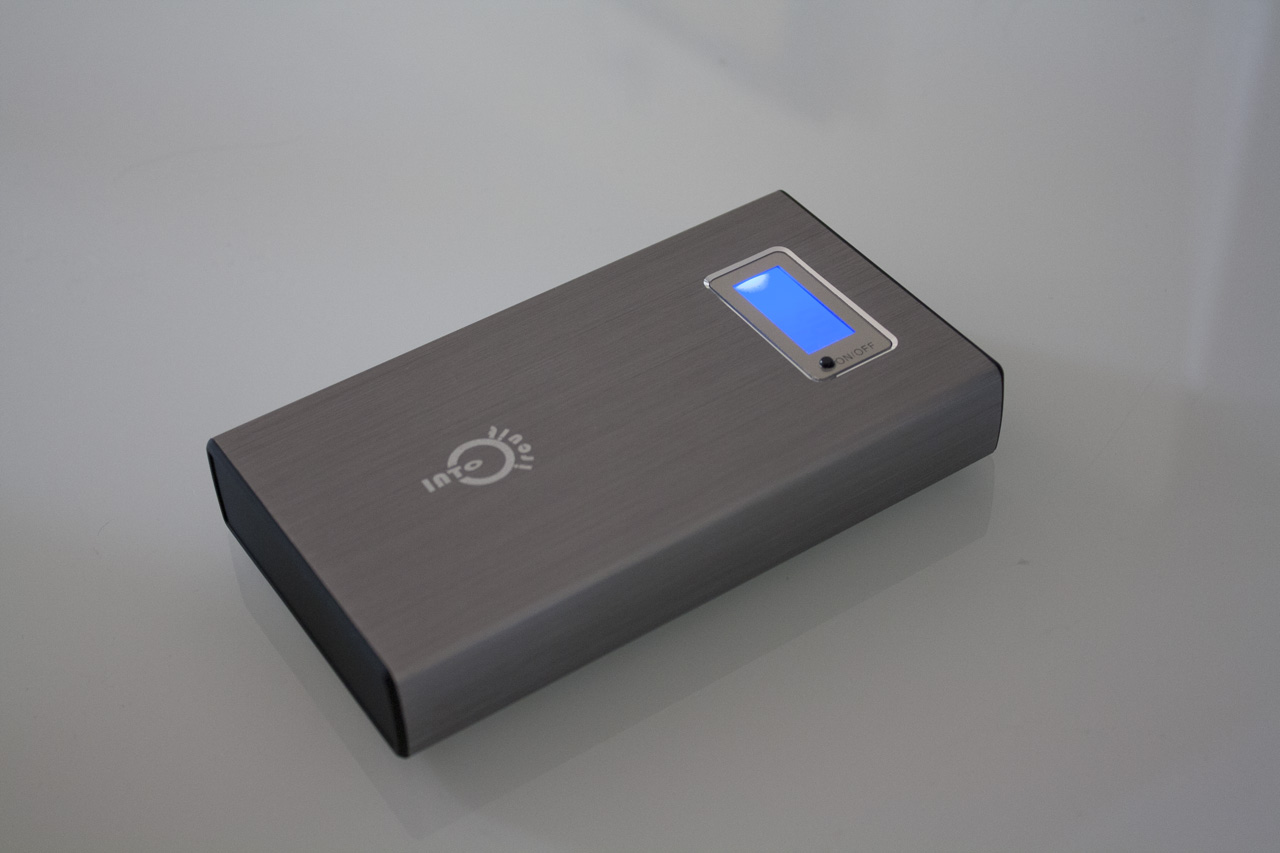 To facilitate this, the Intocircuit has two high-speed charging ports included. Both provide 2.4A / 5W out, which is among the fastest charging possible (although Qualcomm’s Quick Charging 2.0 can provide faster charging to some devices). It’s fast enough to charge both smartphones and tablets alike, and having two ports of course means that you can charge two devices at once.

The battery itself is charged via a micro USB port, which means you can use the same cable to charge the Intocircuit as you use for all non-Apple smartphones and tablets. Finally, you can see the current level of charge on a backlit LCD display, from 0 to 100%, which is a more precise way of expressing this than the usual bank of three or four LEDs. So far, so good. 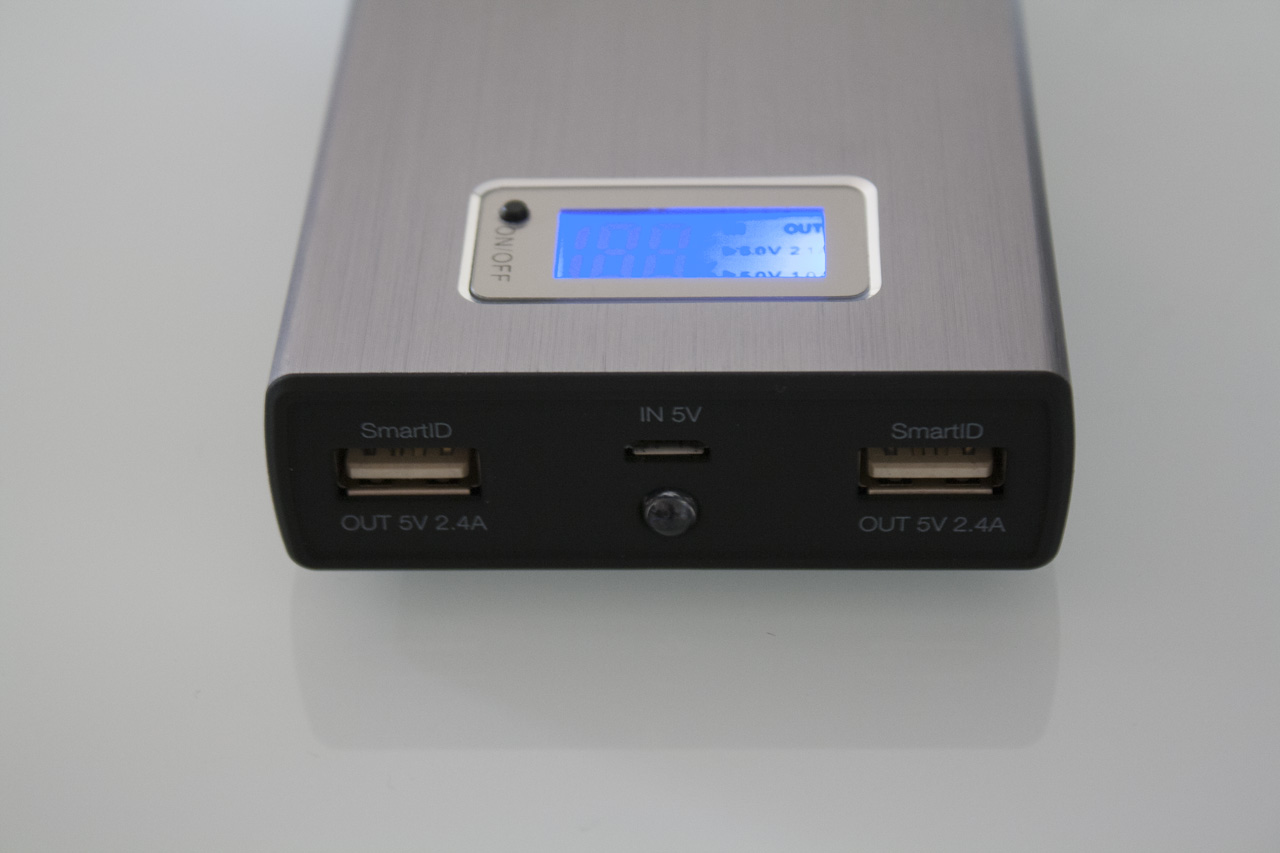 The IntoCircuit also has an integrated LED light, which can be used as a short-range torch in a pinch. This is activated by double-tapping the on/off button, located on the top of the device. I managed to activate this on accident a couple of times while rummaging through my luggage, but it wasn’t a real worry for me. 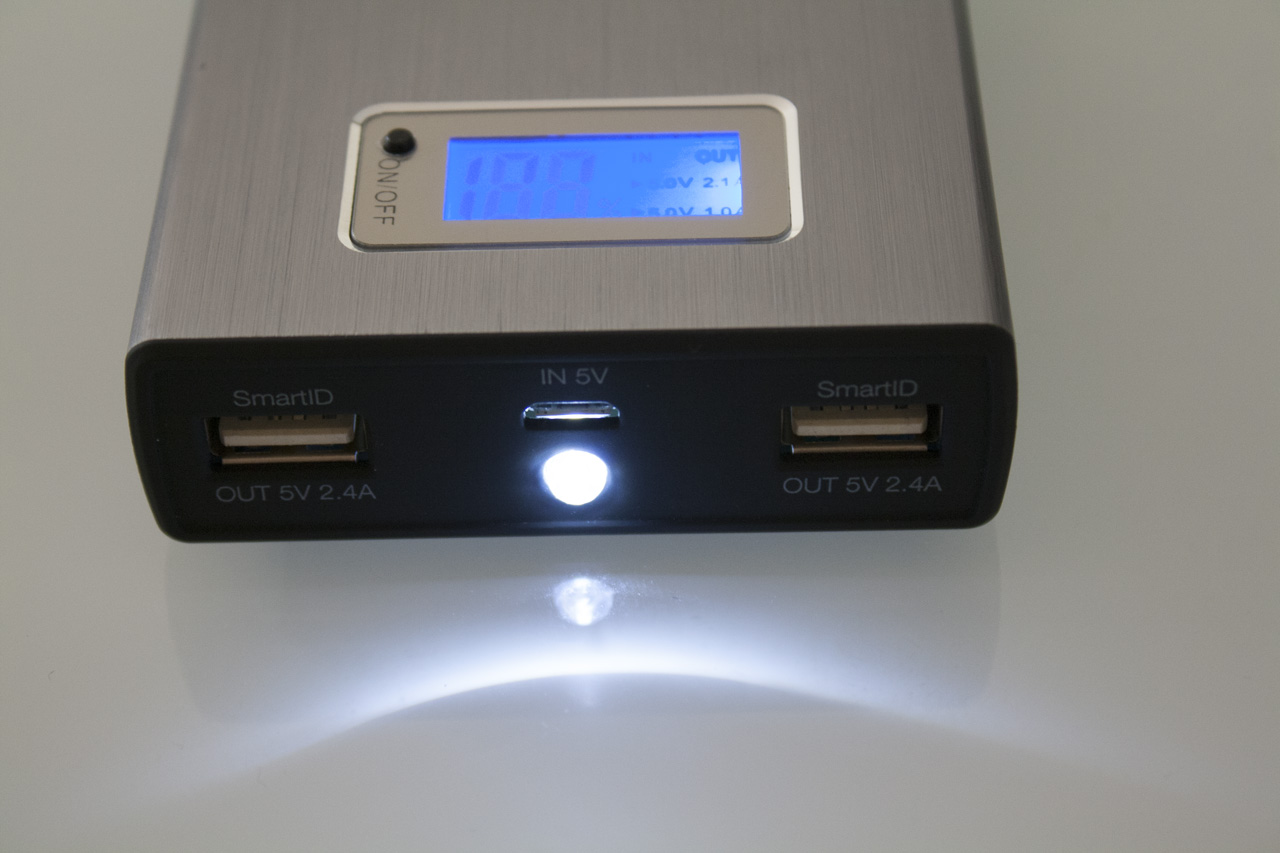 The actual construction of the Intocircuit power bank is also very good. It has an aluminium frame, with soft-touch plastic used for the end caps. The charger is definitely heavy – it’s almost all battery after all – but still relatively compact, easily capable of fitting into the back pocket of your jeans or in your bag.

The device comes with a nice cloth bag, as well as a micro USB cable to charge it. 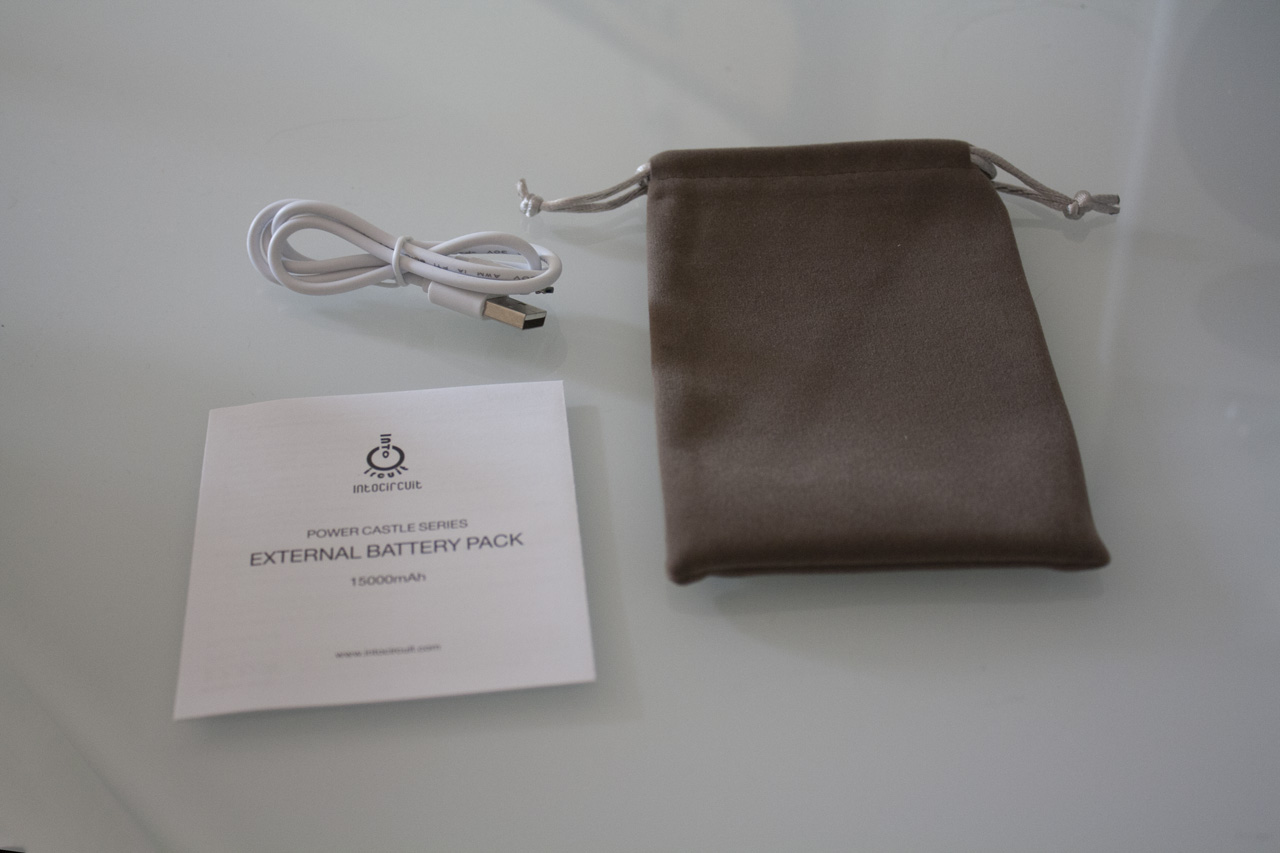 In my testing, the Intocircuit worked well. It charged both iPhones and Android phones rapidly, and the LED light came in handy once or twice too. All in all, it’s a solid piece of kit that will definitely come in useful when you’re traveling away from a convenient power source for extended periods. 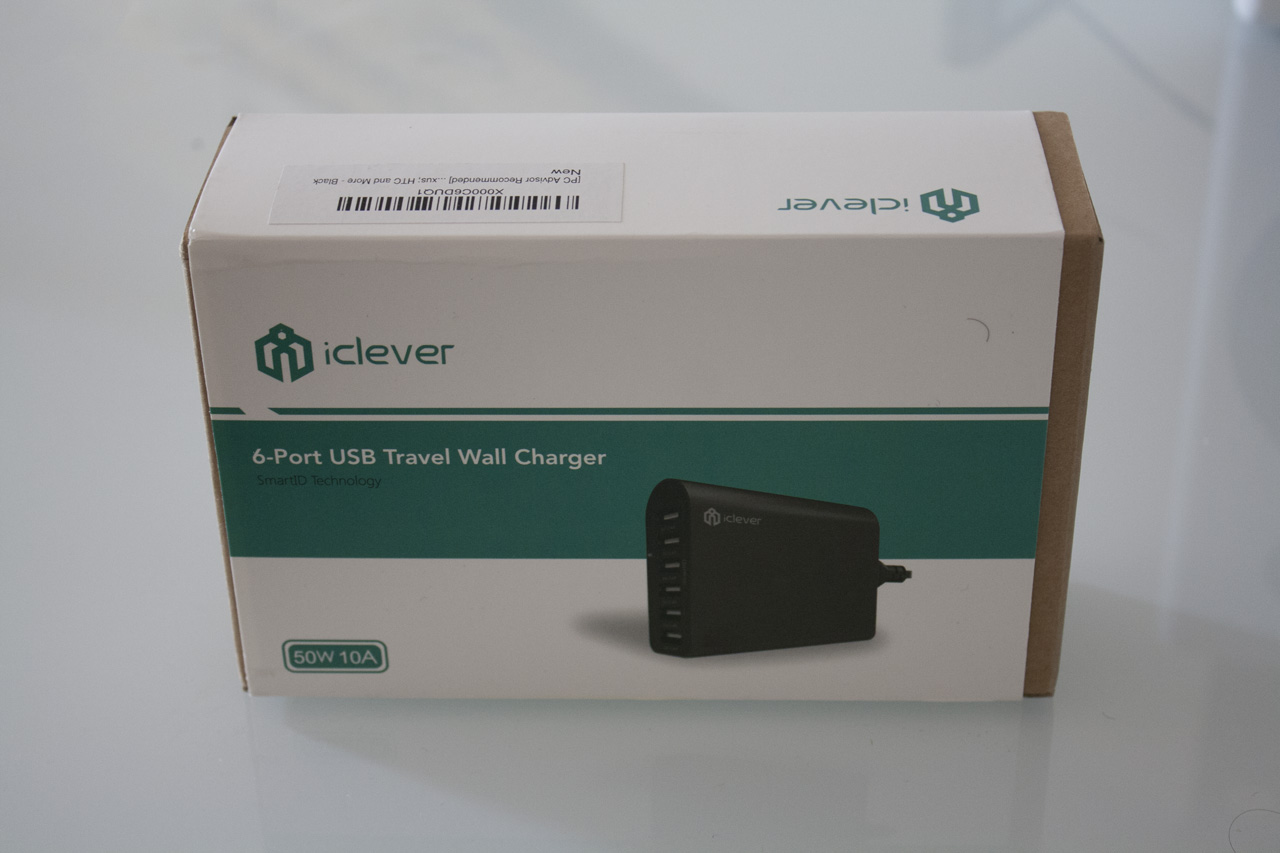 Now we turn our attention to our second device, the iClever desktop charger. This charger plugs into the wall using a standard C7 (“figure of 8”) connector, and comes with an appropriate 5′ UK mains cable to do just that. Once attached, it provides 50W / 10A, shared between up to six devices. The maximum amperage for each port is 2.4A, which is enough for fast charging of smartphones, tablets and accessories. 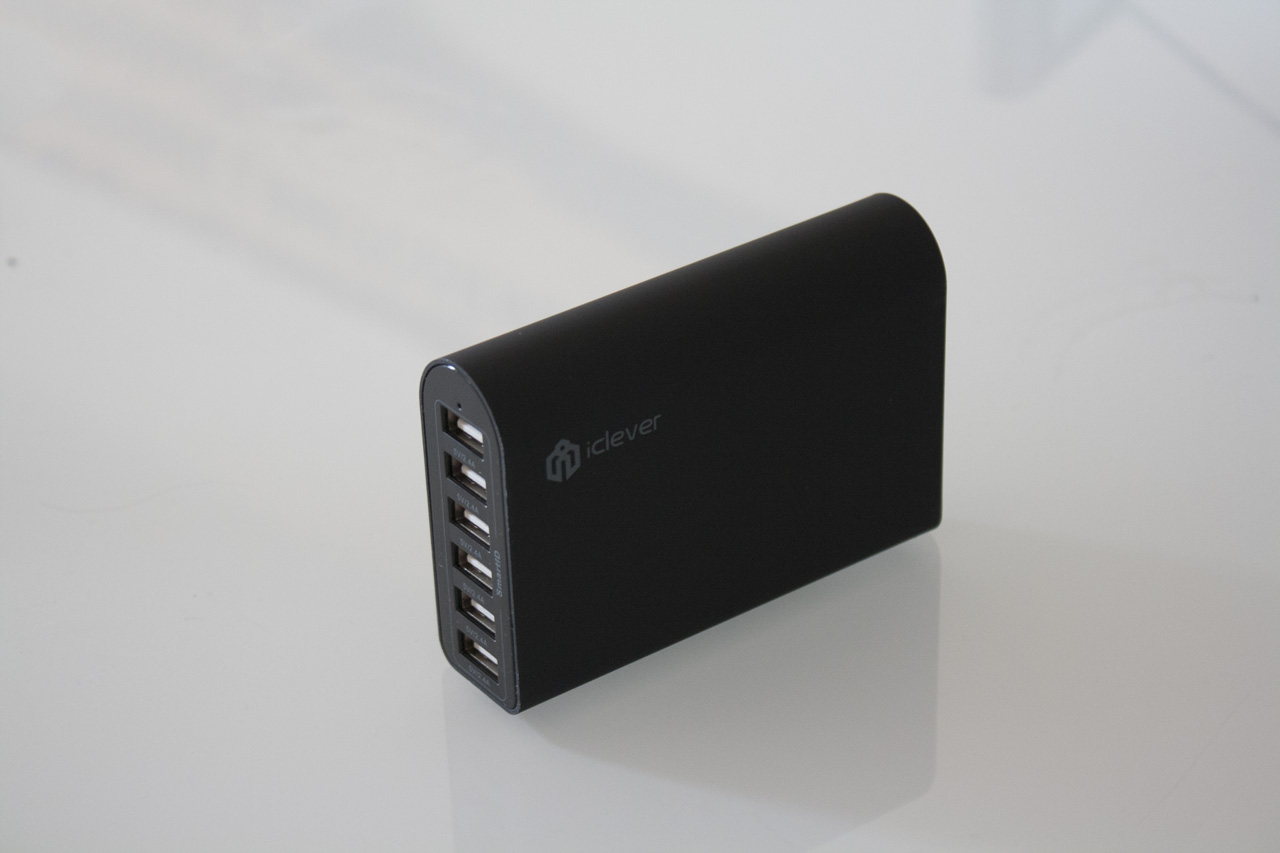 The iClever contains the usual smart features you’d expect – a “SmartID” system that allows devices to be charged at the fastest possible rate and protection from over-current, short-circuit and over-temperature situations. In my testing, all devices connected to the device seemed to charge very rapidly indeed, even when all six ports were being used.

The iClever is coated with soft-touch plastic, with the C7 power connector on one side and the six USB ports on the other. The unit has a very tall arch shape, allowing it to rest on three of its sides with ease while charging. It’s fairly light at ~320 grams, and easily fits in your pocket or bag. 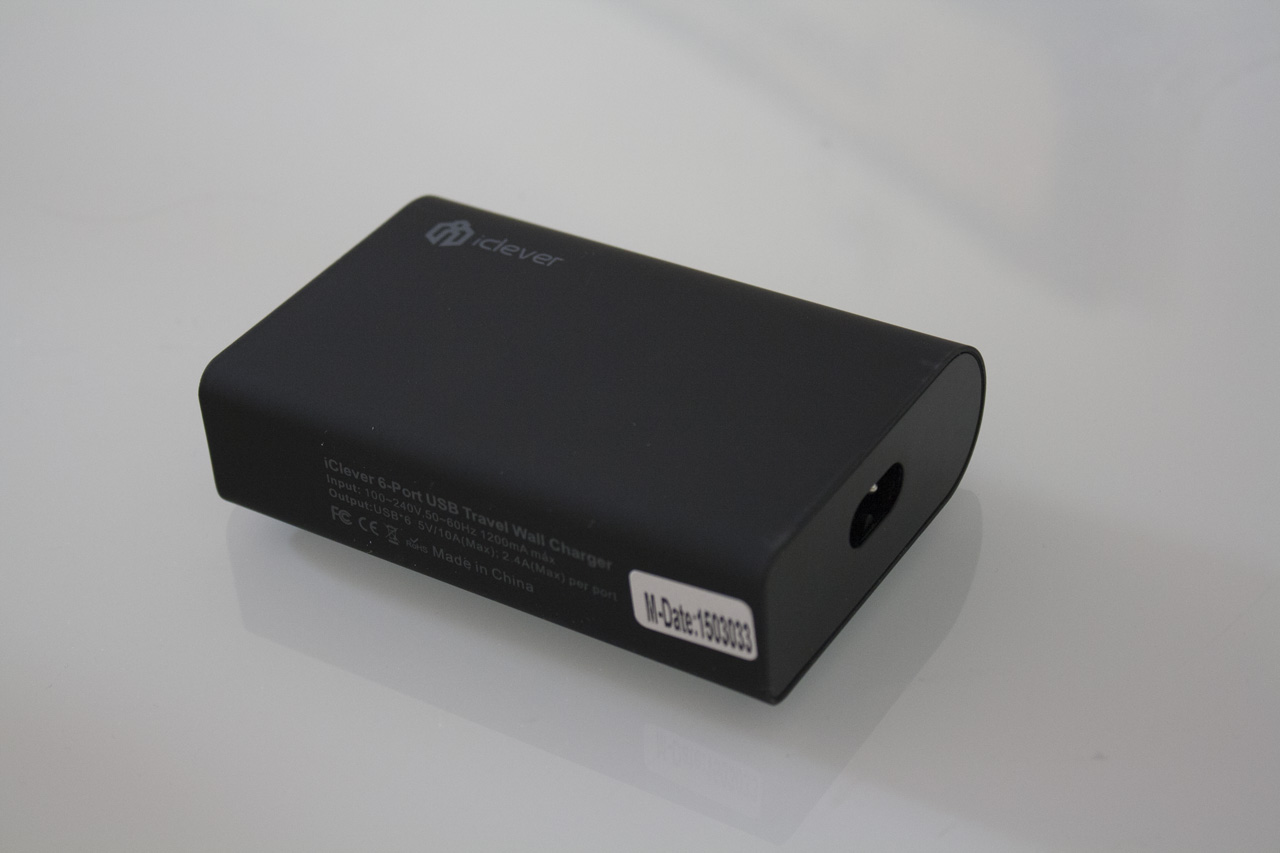 Overall, the iClever desktop charger did its job well. Whether you keep it on a table in the kitchen or take it with you on vacation, you’ll definitely appreciate being able to charge all of your devices while taking up just a single wall socket.

There we have it – two incredibly useful devices, capable of charging your gadgets whether you’re at home, at your hotel or on the go. To pick them up, try the Amazon links below!

Thanks to Hisgadget.inc for providing these samples.

The original Aorus X3 Plus was a beast when we reviewed it last year, with a 3K display, GTX 860M graphics...