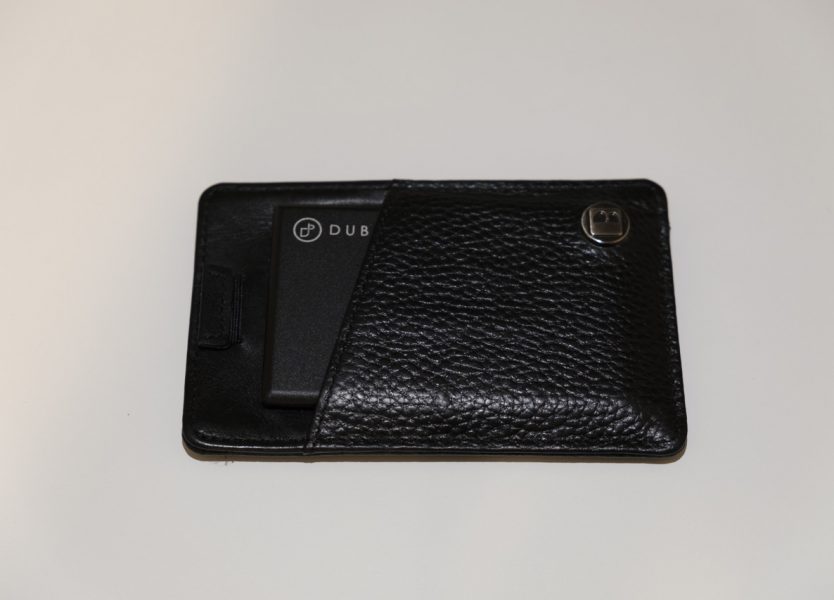 This tiny portable charger is designed to fit in your wallet, providing that emergency power you might need at the end of a long day. It’s called the Dubleup, and it’s available on Kickstarter right now. We were sent an early unit to review, so let’s take a closer look! 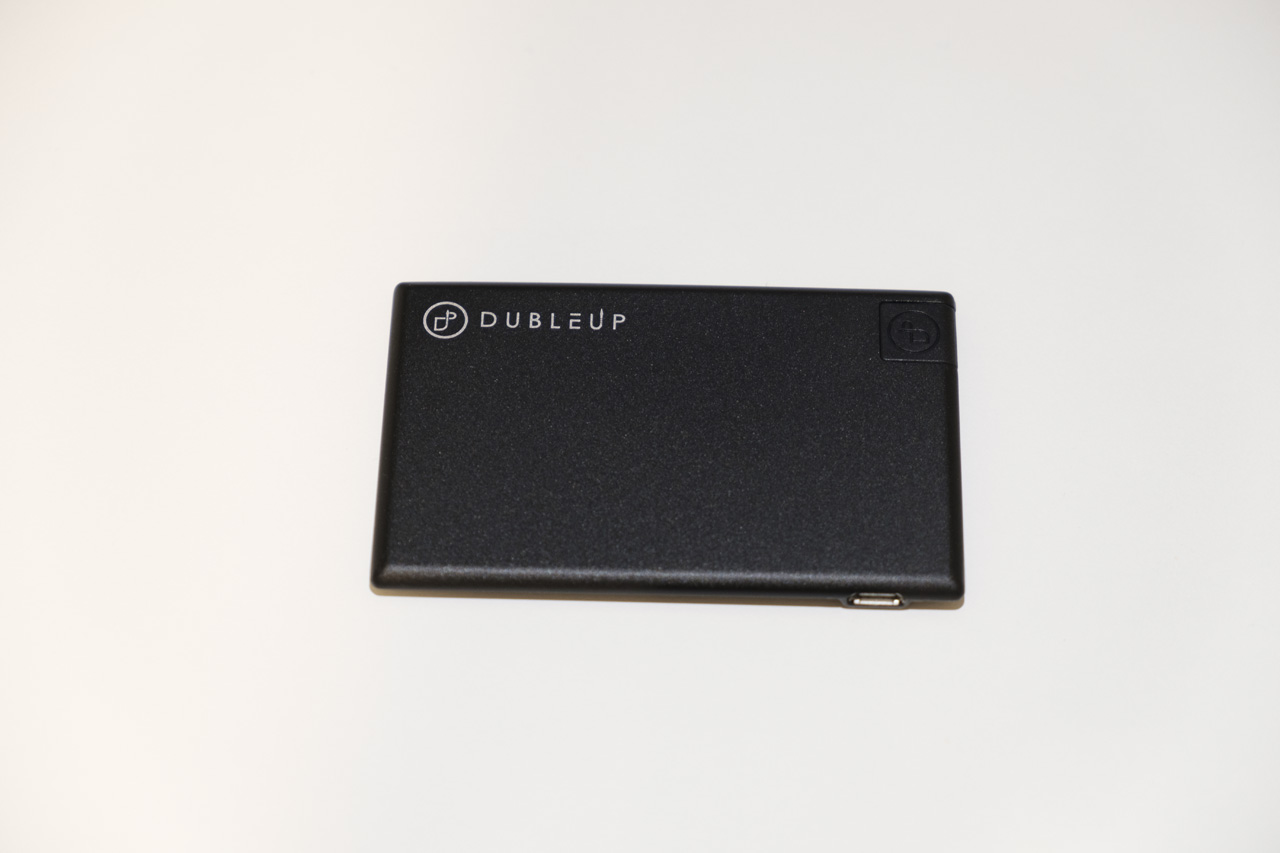 As we mentioned earlier, the Dubleup is precisely the height and length of a credit card, but it’s thicker in order to actually provide a useful amount of portable power. It’s 5.5 millimetres thick so it will squeeze into most wallets without a problem, and it weighs only 40 grams so it shouldn’t be too much of a burden either.

The front of the card is nearly featureless, with only a small square cutout and a Dubleup logo. Push that square, and an integrated charging cable will pop out. Both Micro USB and Lightning are supported, allowing most smartphones to be charged. Sadly, USB-C doesn’t seem to be an option at the moment. 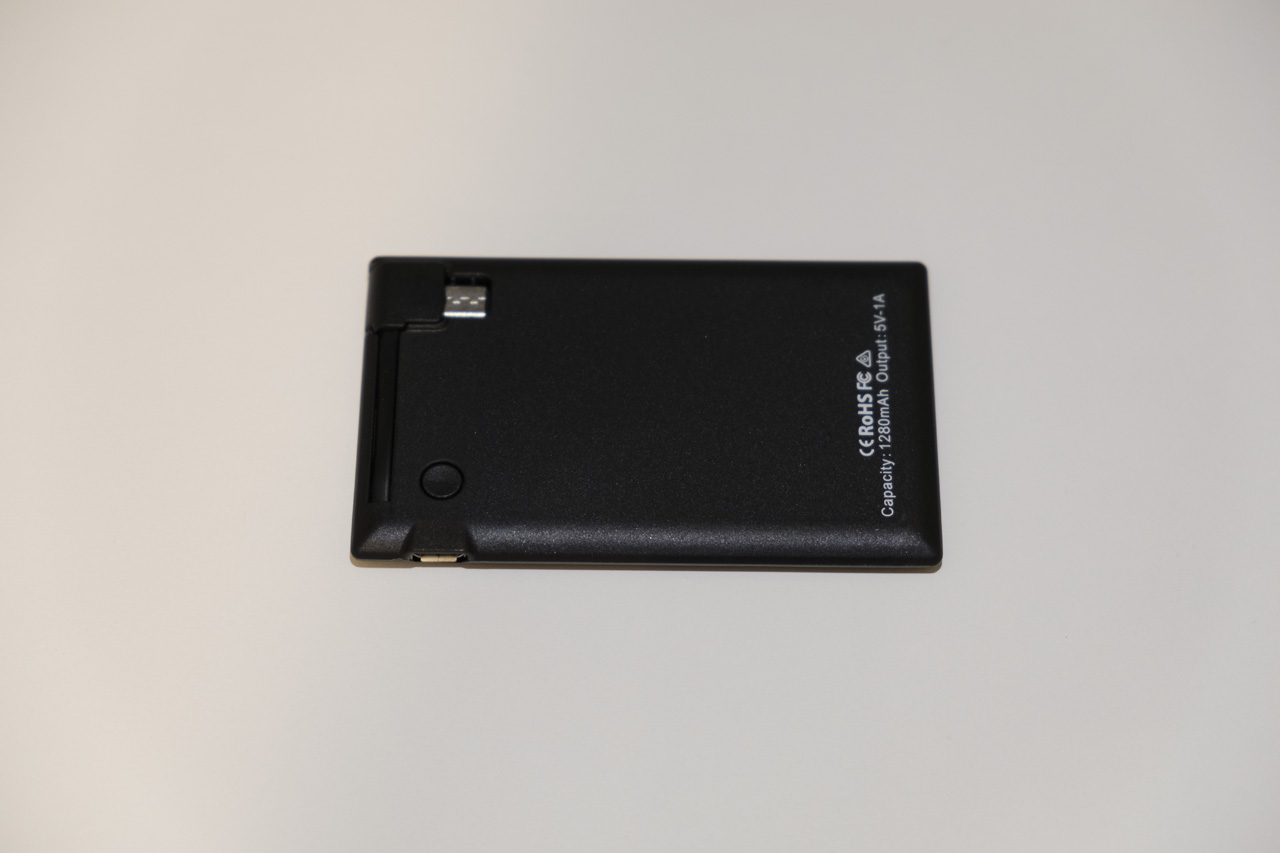 The back of the device has a few more details: a button which starts the charging process and the required regulatory information, including the capacity of the card: 1280mAh. An easily-visible capacity marking is required by some airports, so it’s good to see it here.

1280mAh is enough to give you about 20 to 25% charge on most modern smartphones; a little bit more on the iPhone. 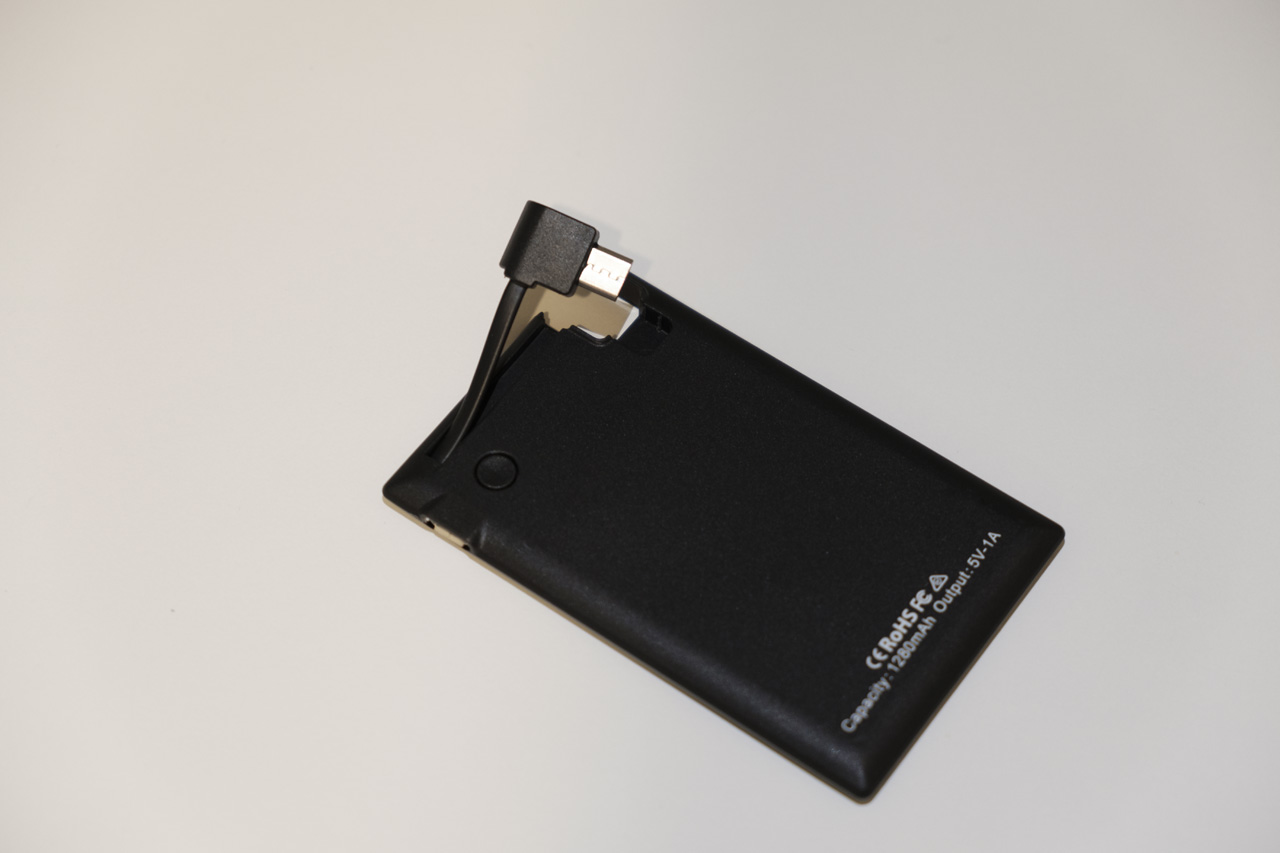 The sides of the Dubleup are rounded so that it sits nicely in your hand. On the right side (from the front), there’s a micro USB port that allows the power bank to be recharged from a computer or mains adapter. A Micro USB cable for this purpose is provided in the package (if you didn’t already have dozens of Micro USB cables in your home).

The Dubleup will be available in three colours: silver, black and gold, which should suit most premium phones on the market.

The Dubleup felt fairly durable in our testing, with no flex in any dimension. This is important for something that will likely be sat on for most of its working life. 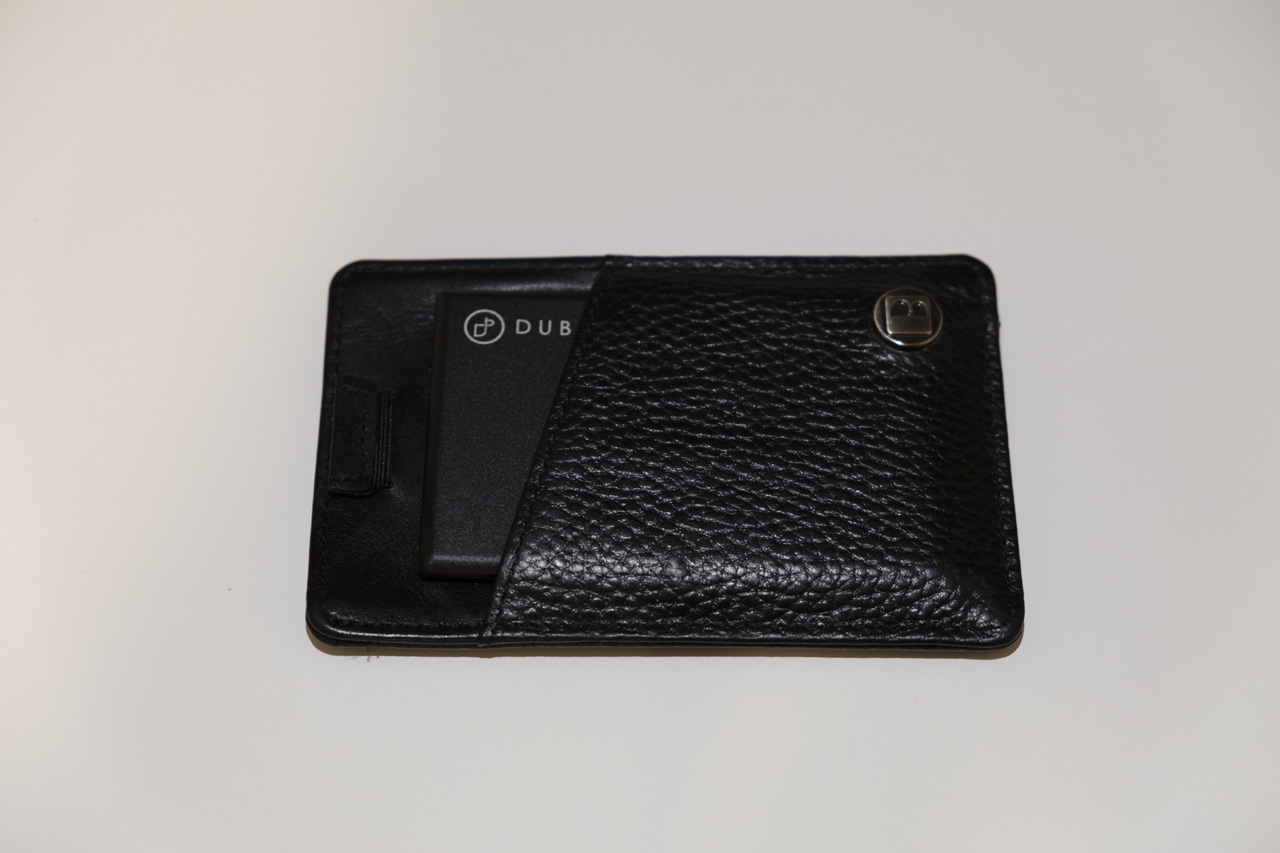 We kept the Dubleup in our wallet for a week, using it whenever our phones were running low on juice. In that time, we found it became quite indispensable; there’s definitely something comforting about knowing that even if your phone dies, you can revive it temporarily to make a phone call, call an Uber or buy something with Android or Apple Pay.

The thickness of the Dubleup was a little bit more than we expected, but of course this is necessary in order to have a useful amount of charge. We found that 1280mAh was just about enough; a fair balance has been struck here. This is dispensed at up to 1A, which isn’t super fast but it’s easy enough to place both your phone and the Dubleup in a pocket until charging is complete. 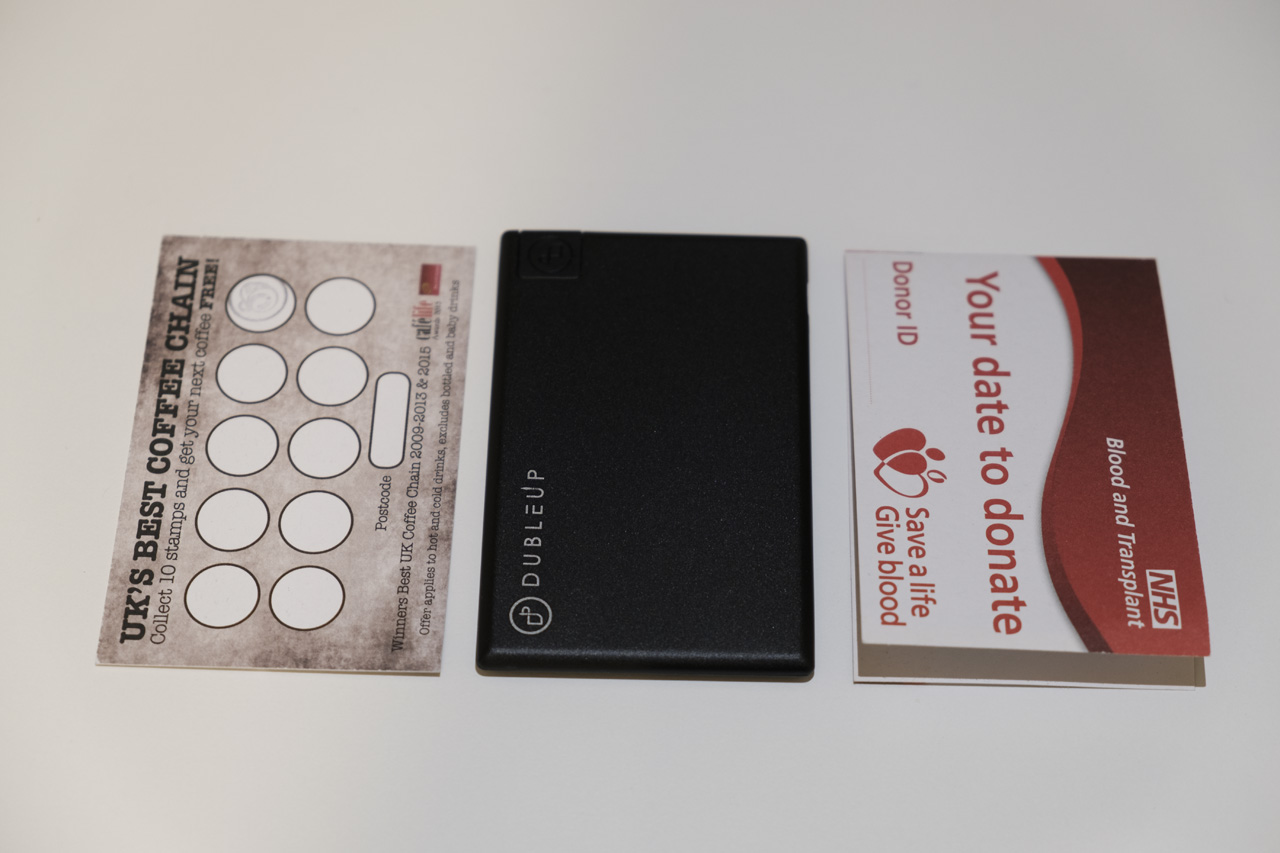 The integrated cable is also quite handy. We’ve seen a few credit card sized power banks that didn’t include that feature, and it really kills the whole appeal unless you have a power cable on your keychain or something (which is possible, but another thing you have to make sure you have with you… not ideal).

All in all, the Dubleup performed its function with alacrity, provided topups when necessary and staying out the way otherwise. Apart from actually remembering to recharge it between uses, we didn’t face any difficulties with the device. It’s certainly fit for purpose.

There are a fair few credit card sized power banks on the market, so how does the Dubleup measure up? On price, it’s definitely towards the top end of the market, costing around £40 on the Kickstarter ‘early bird’ offer and a little more thereafter. For comparison, you can get an 1800mAh credit card sized charger for just £8 on Amazon, although this is (a) thicker and (b) doesn’t come with an integrated cable.

The Dubleup is available via Kickstarter right now. As of the time of writing, Dubleup have raised $6,000 of their $50,000 target, with 82 backers of the project. There are still some early bird specials available, so if you’re interested then get yourself over to the Kickstarter page.

Ultimately, we think it’s difficult to wholeheartedly recommend the Dubleup to value-oriented customers, but it may find some fans from the ‘buy cheap, buy twice’ crowd. The Dubleup feels solid and well designed, and we think it’s reasonable to pay a little bit extra for that. 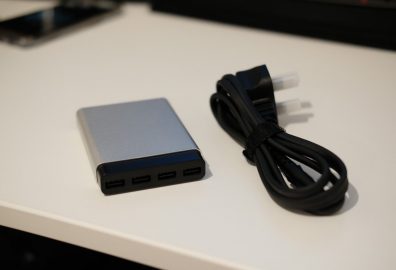 Just Mobile claim their AluCharge is the slimmest USB charger in the world, providing four USB ports of fast... 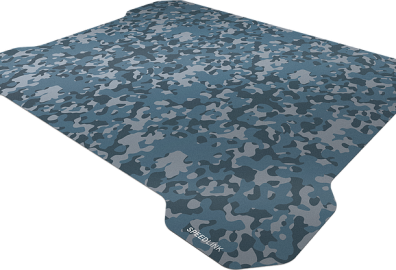