In this rapid-fire review, we’ll evaluate the Matrexx 70 case from Deepcool. This case is a mid-range option, costing just £100 in the UK, but provides a surprisingly long laundry list of features and sports a fashionable glass panel design with three RGB fans pre-installed up front. Let’s see whether its beauty is only skin-deep, or whether this case is a worthy rival to cases that cost double the price.

Update (10/10/2019): Since writing this review, we had issues with the RGB controls and PSU shroud lighting – it was meant to be much more than the ambient look it possessed. Deepcool informed us that the lamp control is broken on our unit, which is apparently an irreparable fault. It’s disappointing that this could occur, so be sure to check this functionality on your unit once you receive it and get a replacement unit if necessary. 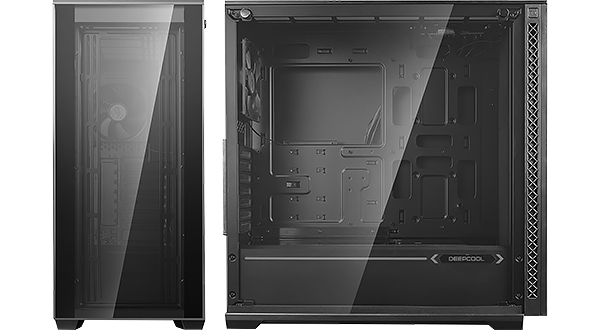 The Matrexx 70 is a handsome, boxy case with glass on the front and side. The side glass is held in place with two thumbscrews, while the front glass gets a quick release button. 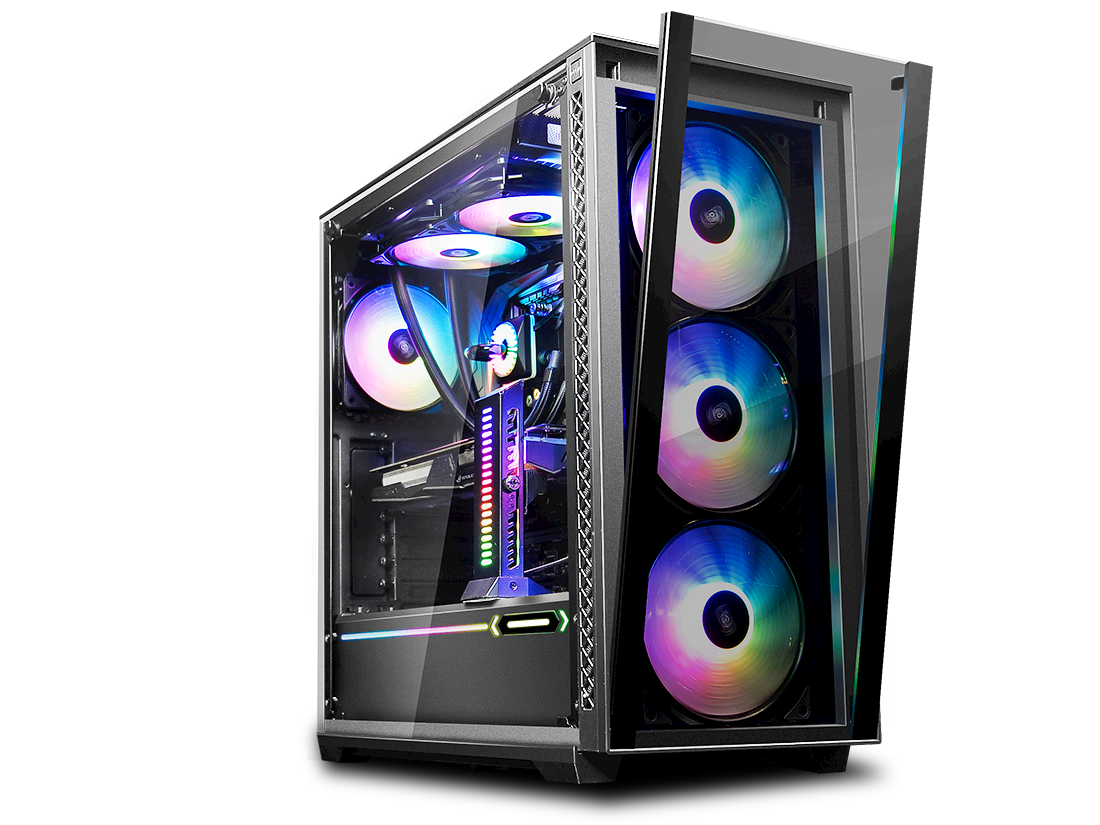 The case has relatively large dimensions for a mid-tower, with 30mm clearance on the back tray which should result in easy cable management. 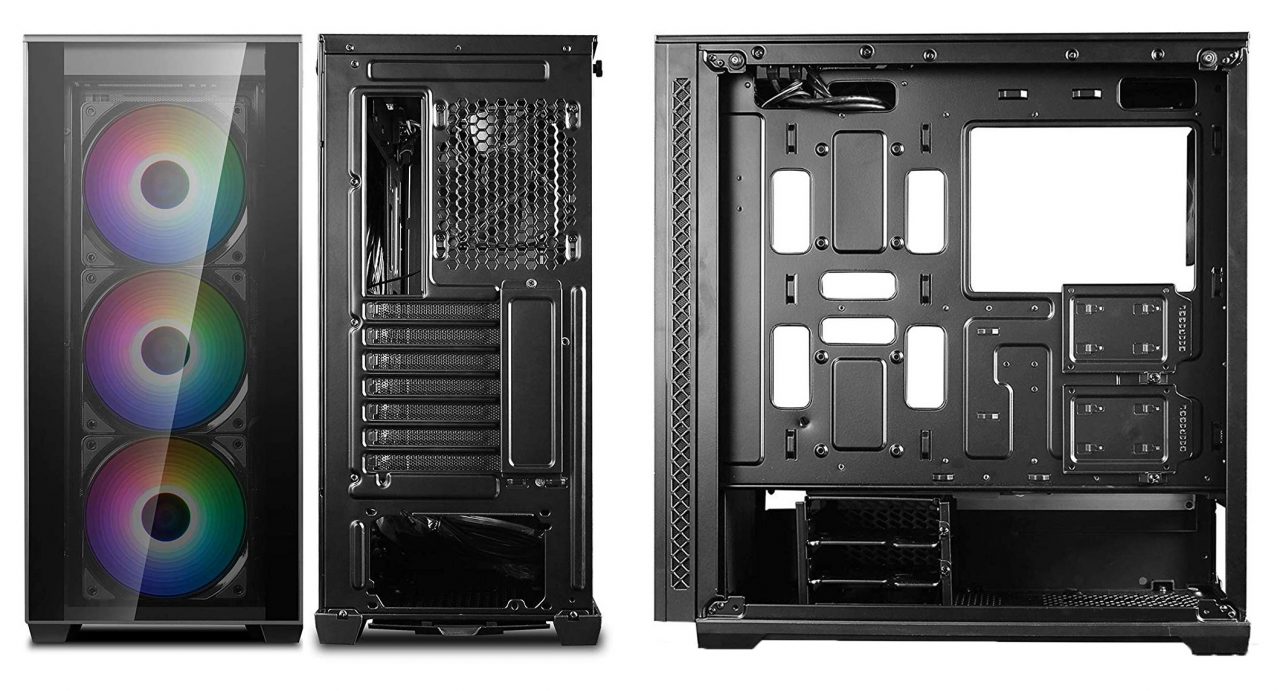 The case supports liquid cooling well, with the option to mount radiators up to 280 or 360mm both up front and along the top. A single 120mm radiator can also be installed on the back if required. Radiators mounted up front can be installed onto a removable “radiator holder”, which simplifies what can be an annoying process of screwing in and cable routing.

A removable PSU shroud is installed in the bottom of the case, with RGB lighting for a line and Deepcool logo along its top edge – however, we found the lighting was far dimmer than the image above suggests.

The top of the shroud is made from tinted glass, which hides any cable mess lurking below and reflects light from your other RGB components to make the inside of the case look bigger than it actually is. 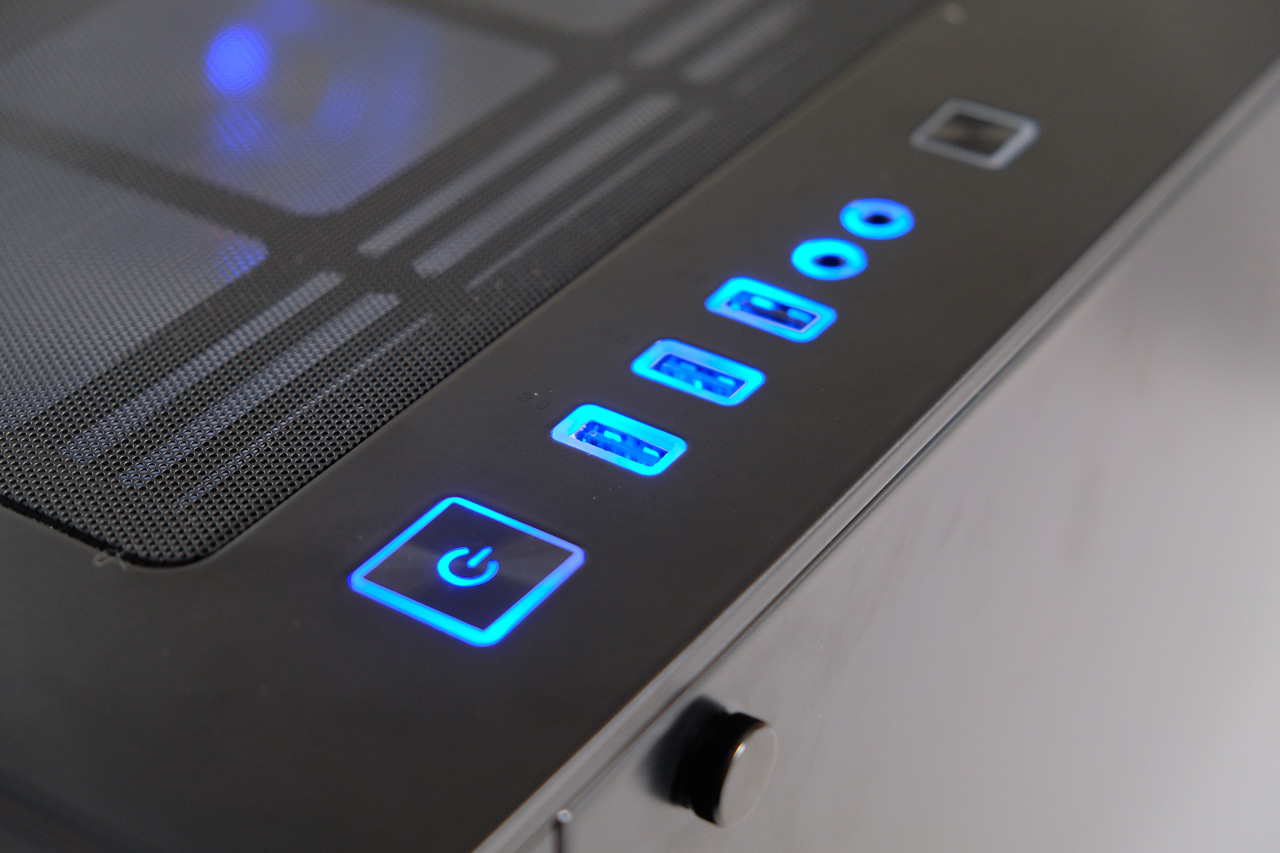 Top I/O is substantial, with no USB-C (boo) but three USB ports (yay). Headset inputs, power switch and RGB button are also included; you can also control the RGB lighting with most motherboards such as those by Gigabyte, Asus, Asrock and MSI. Each port and button here is ringed by an LED, which looks quite spectacular once the PC is turned on. 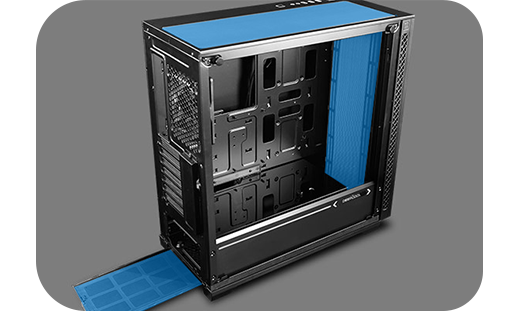 Dust filters are included for the top, bottom and front of the case, which should reduce the amount of dust that accumulates on your fans and other components. 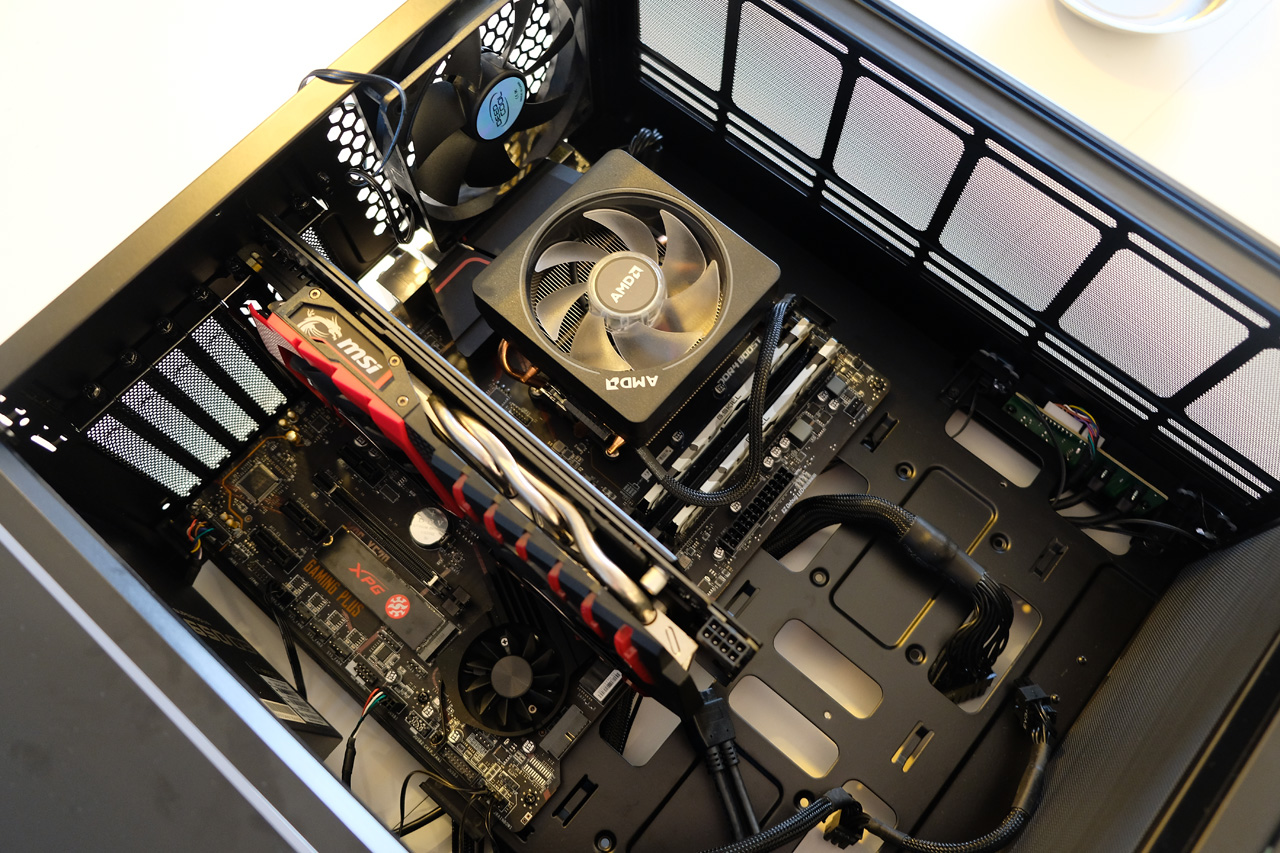 Here are the components we used for our Matrexx 70 test build:

These components are truthfully what was available, rather than a superbly optimised build – I’d recommend spending less on the CPU and more on the GPU, for example – but it represents a low to mid-end gaming PC. You’ll note that as an AiO wasn’t available, we didn’t test fitting a radiator to this PC, but we did try fitting a SATA SSD before eventually switching to an NVMe alternative (more on that later). 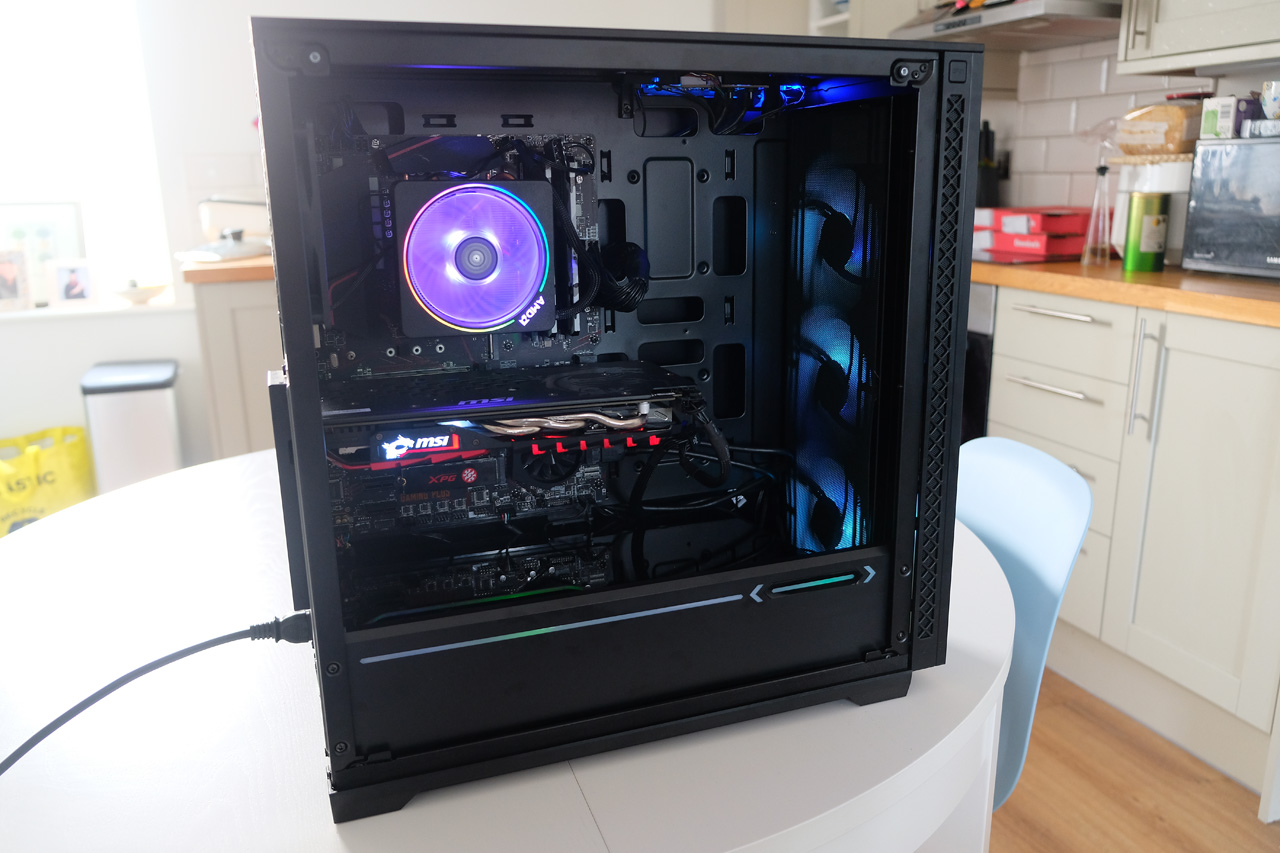 The build started well, with the Matrexx 70’s standoffs providing much less issues than the NZXT ones we used most recently. The incredibly short manual provided with the case (and its online counterpart) don’t tell you which screws are used for which components and they aren’t separated in the bag, so pay attention here. 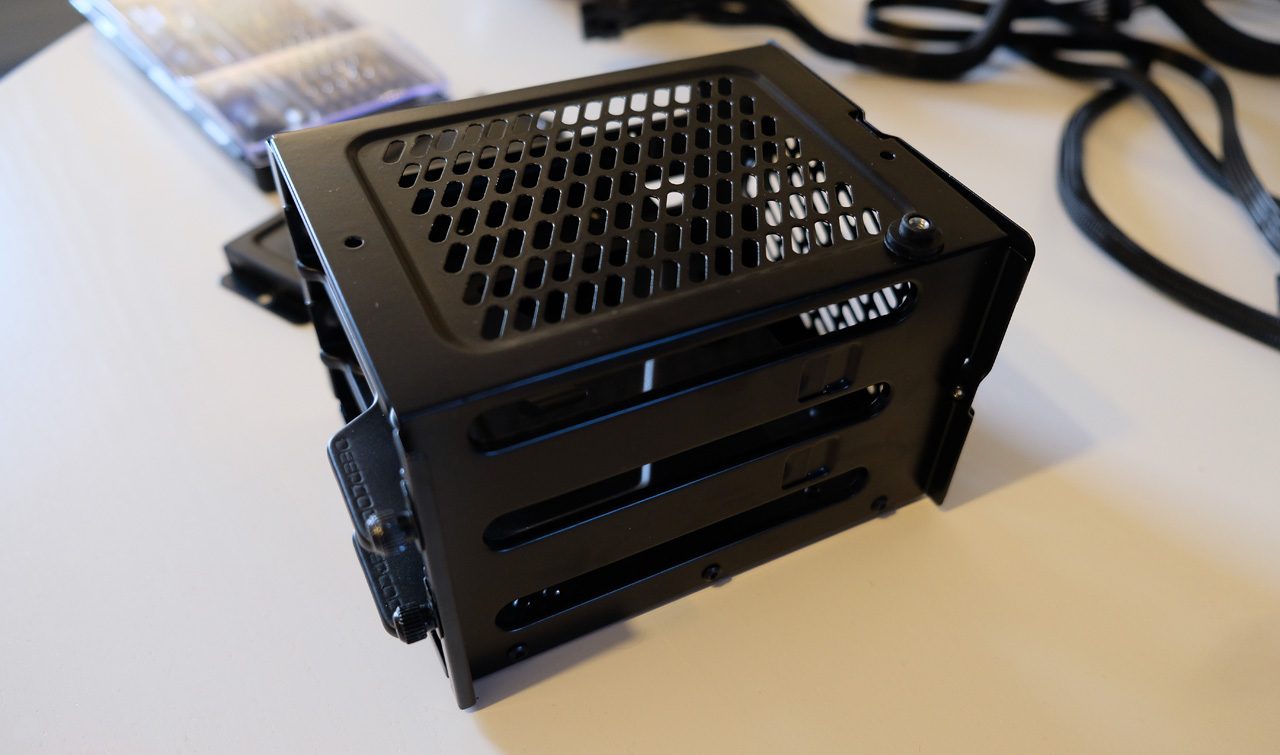 With the motherboard slotted it in easily, we installed the power supply. Despite being a modular PSU, the number of cables we needed – motherboard 24-pin, CPU 8-pin, GPU 8-pin, SATA – still just barely fit in the PSU bay, thanks to the default placement of the 3.5-inch drive caddy. You can see the lay of the land in the image below – the left side is where the PSU sits, while the right is for the HDD cage. Thankfully, this HDD mount can be moved into a second set of pre-drilled holes further away from the PSU, allowing more space to stuff your cables, while still propping up the reflective glass panel that hides most of your cable handiwork. 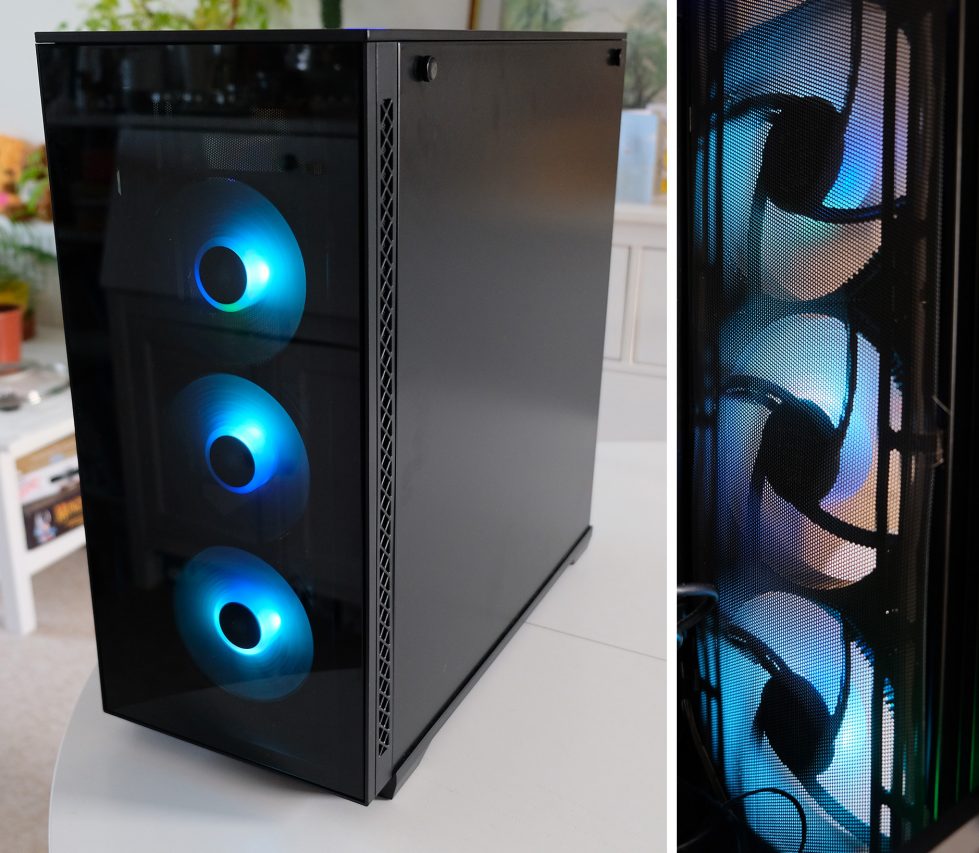 Installing the case fans was relatively simple, with power for each of the three fans connected to a single fan header on the motherboard using a cable provided in the box – although I wouldn’t have complained if this was pre-installed. The RGB side of the equation is handled by a SATA cable, with the option to instead use a four-pin RGB header on your motherboard if applicable. The rear fan is not RGB and its cable comes with both a Molex and four-pin PWM plug; using the latter meant that the bulky Molex cable had to hang out awkwardly on top of the motherboard. 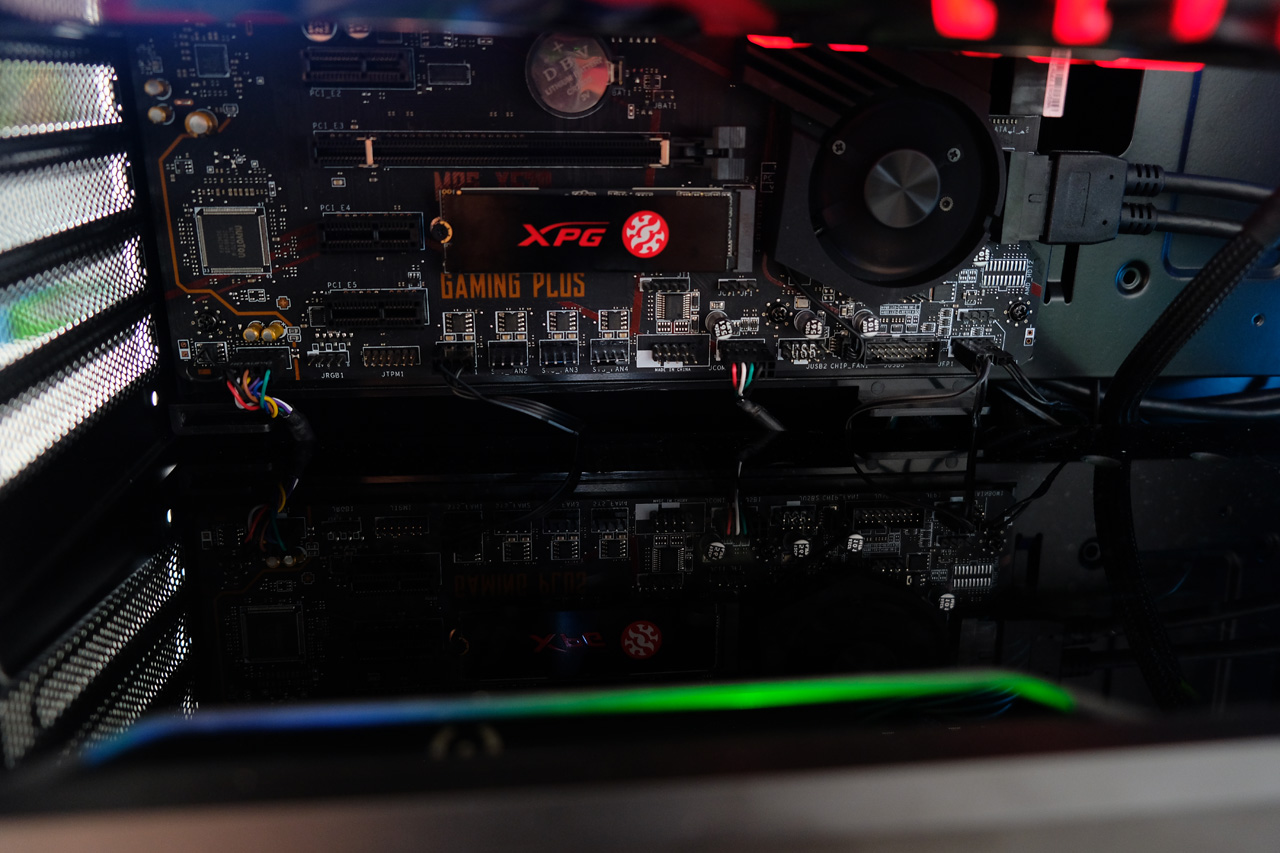 There are two 2.5-inch mounts on the rear of the case for SATA SSDs to be installed, but we ran into trouble using them. The tool-less installation method is convenient, but only allows for the SSDs to be screwed in one way – which doesn’t leave enough room for anything but a flat SATA power cable to be installed. The right angles of our SATA power cables meant we needed to either mount the SSD elsewhere or really flatten the cable to make it fit; we chose the latter and the SSD stopped working after the first successful boot. It’s not clear whether the drive has been irreparably damaged through this mounting or it was an incidental failure, but either way it’s a real shame. The troubleshooting cost us a good hour before we ended up opting for an NVMe drive instead – a real shame. 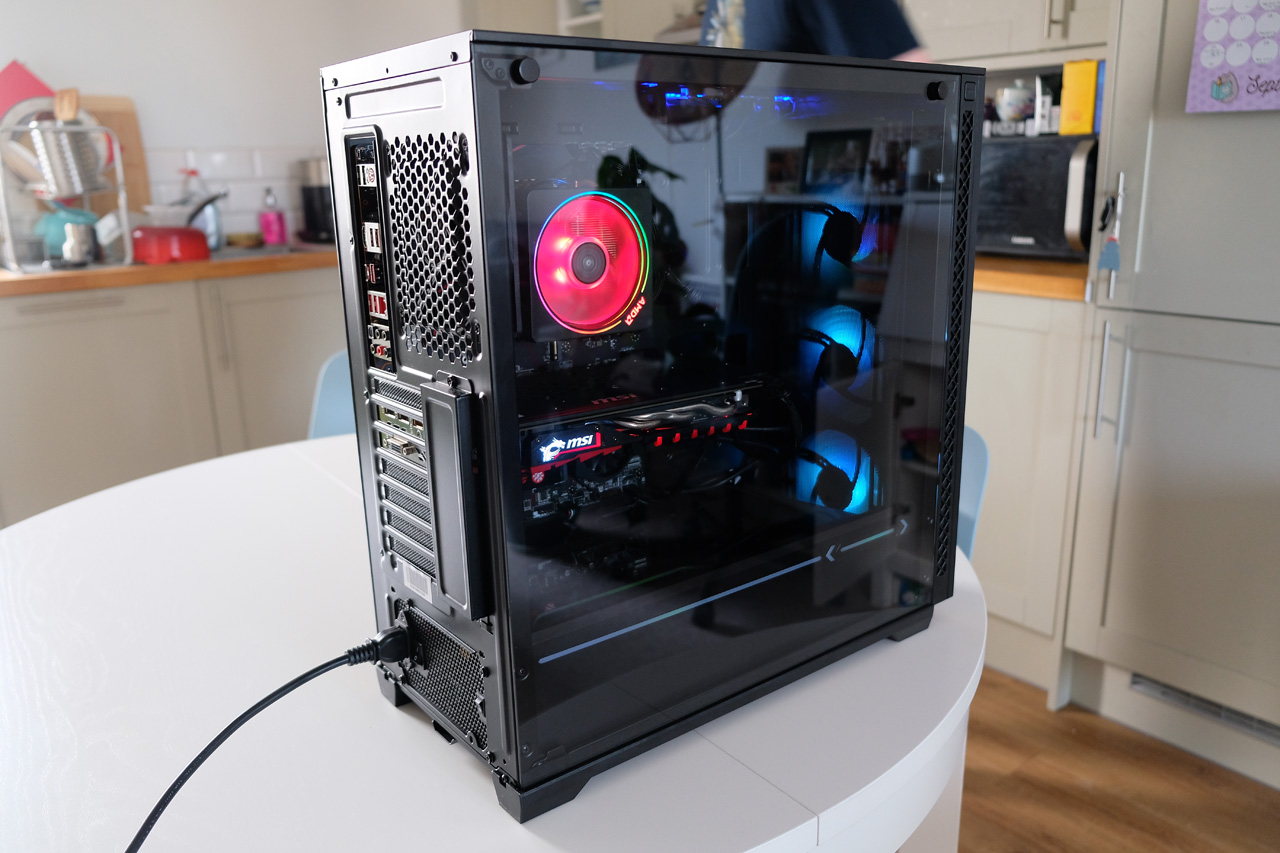 Interestingly, the top and front filters for the case are held in place with sticky tape, which occasionally left a bit of detritus when removed. The front filter is made from a thin mesh, which must be tucked into ten slots whenever you put it back in – this takes a while, especially as some of these slots are in the dark recesses of the case. It would be great to see a simplified magnetic fixture for this, as it’s quite annoying to replace. Thankfully, the top mesh clings magnetically and the bottom mesh slides into place easily. 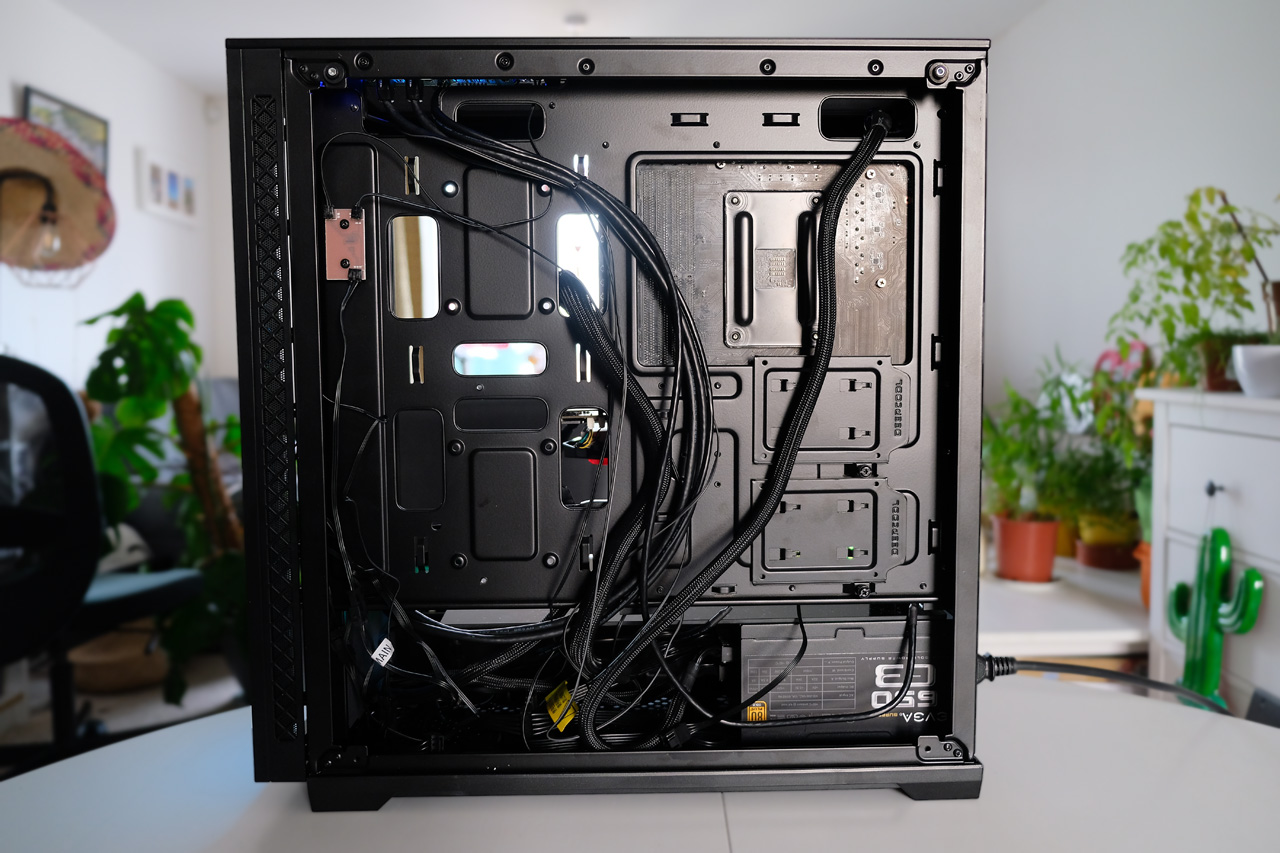 The rear side of the case provides 30mm for your cables, which we found enough for our needs. There are no pre-installed velcro straps, but there are enough tie-down points that you shouldn’t face too much difficulty making everything neat and tidy even with the extra wires required by RGB fans. 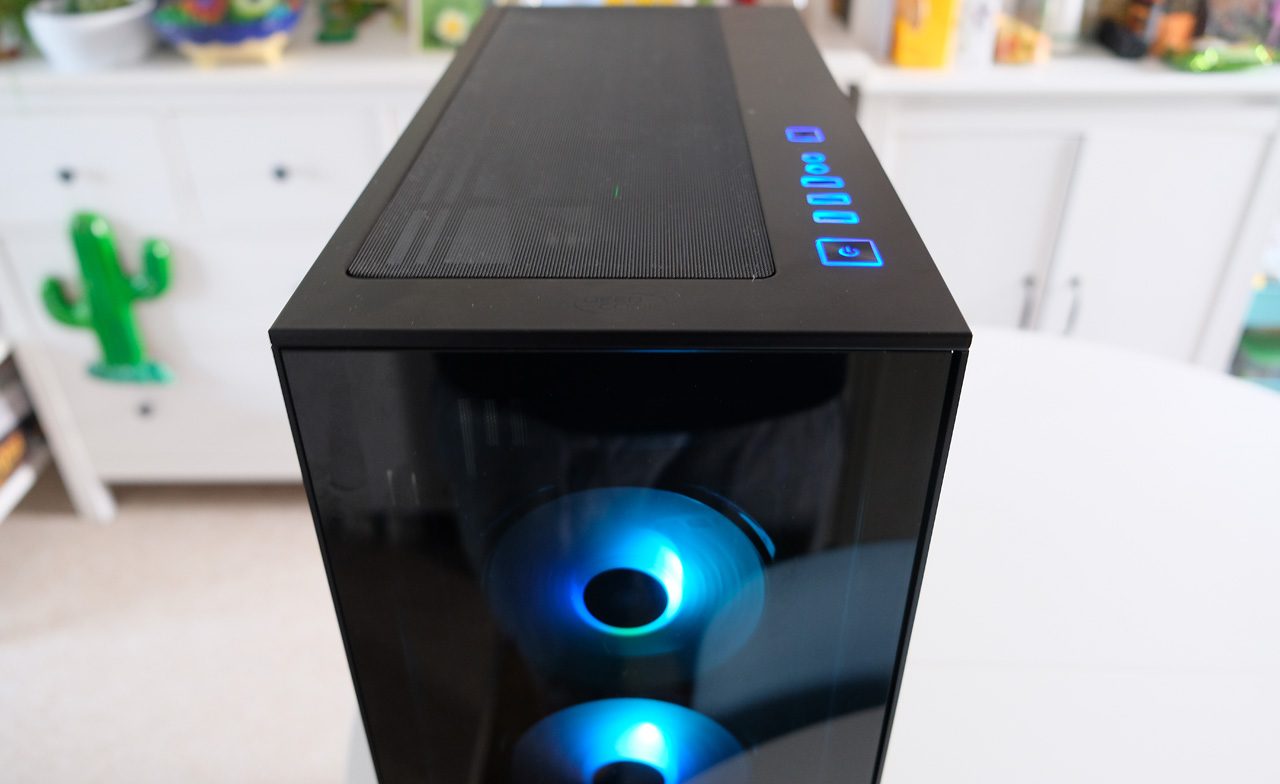 We’ll briefly cover noise and thermals based on the limited testing we performed. At idle, we saw CPU and GPU temperatures in the neighbourhood of 50 degrees (this is a Ryzen 3600X using the Wraith Prism cooler with PBO on and an MSI GTX 1060 3GB, for reference). Under load, the highest temperatures recorded in MSI Afterburner were 84 for the GPU and 71 for the CPU, although looking back through the recording 77 for the GPU was a more normal figure. 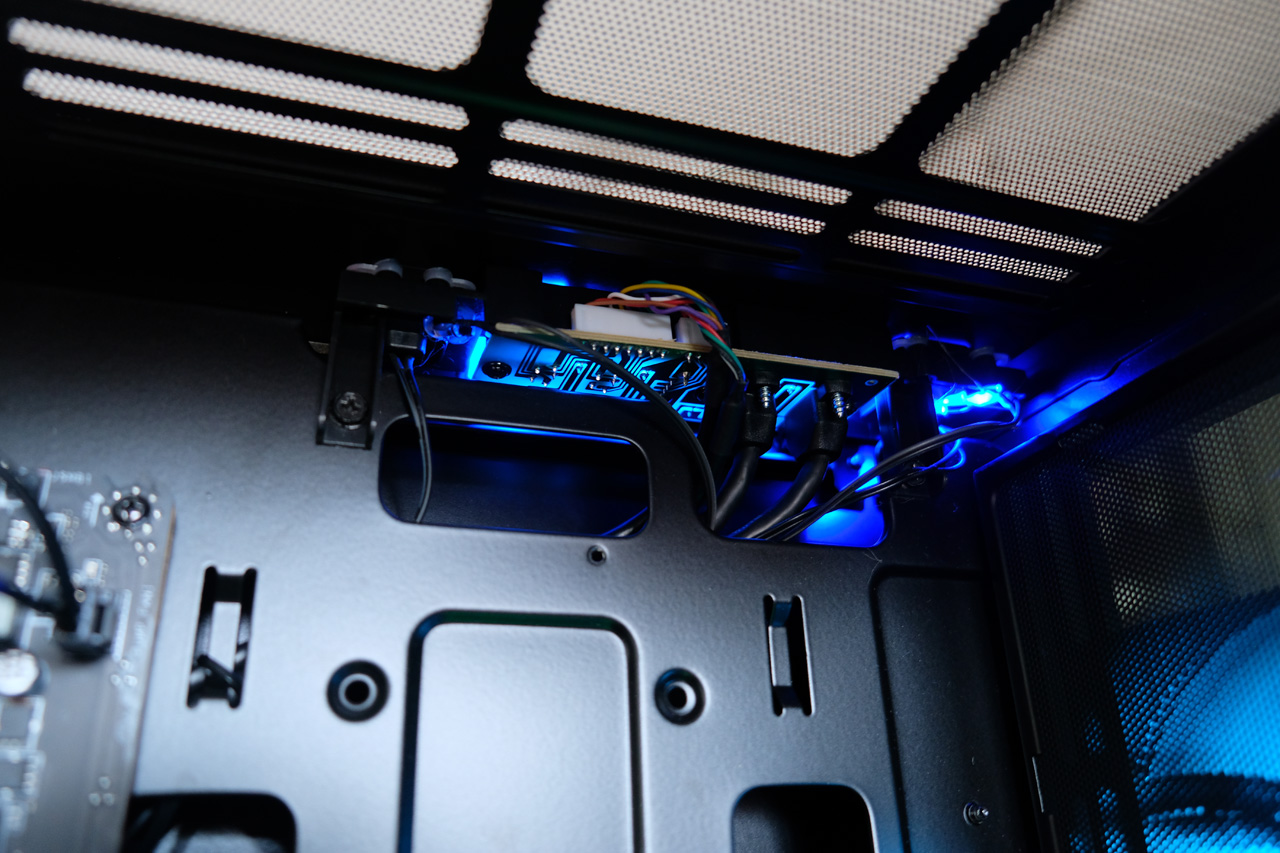 This is broadly in line with expectations, and indicates that the default setup – three front fan intakes, one rear exhaust – is quite sensible. Note that these figures are with all dust filters in place; removing these would allow for greater air intake and therefore potentially lower temperatures.

Noise was also more than acceptable, with the PC being nearly inaudible at idle and still reasonably quiet under load with this particular hardware.

While the Matrexx 70 has a few small annoyances such as the annoying mesh and poorly designed SSD mounts, it’s still a fun case to build in and provides good value for money. Deepcool may not be a household name in the West, but it’s clear that their case designs are just a few iterations away from greatness. 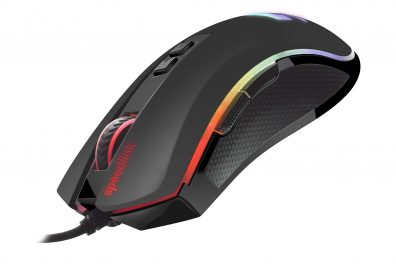 It’s been years since we last reviewed a Speedlink mouse, and the industry has changed substantially in... 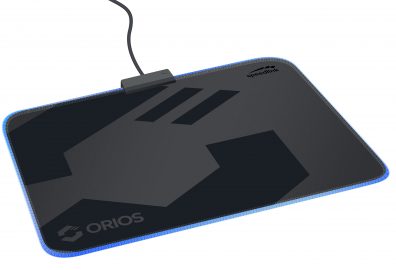