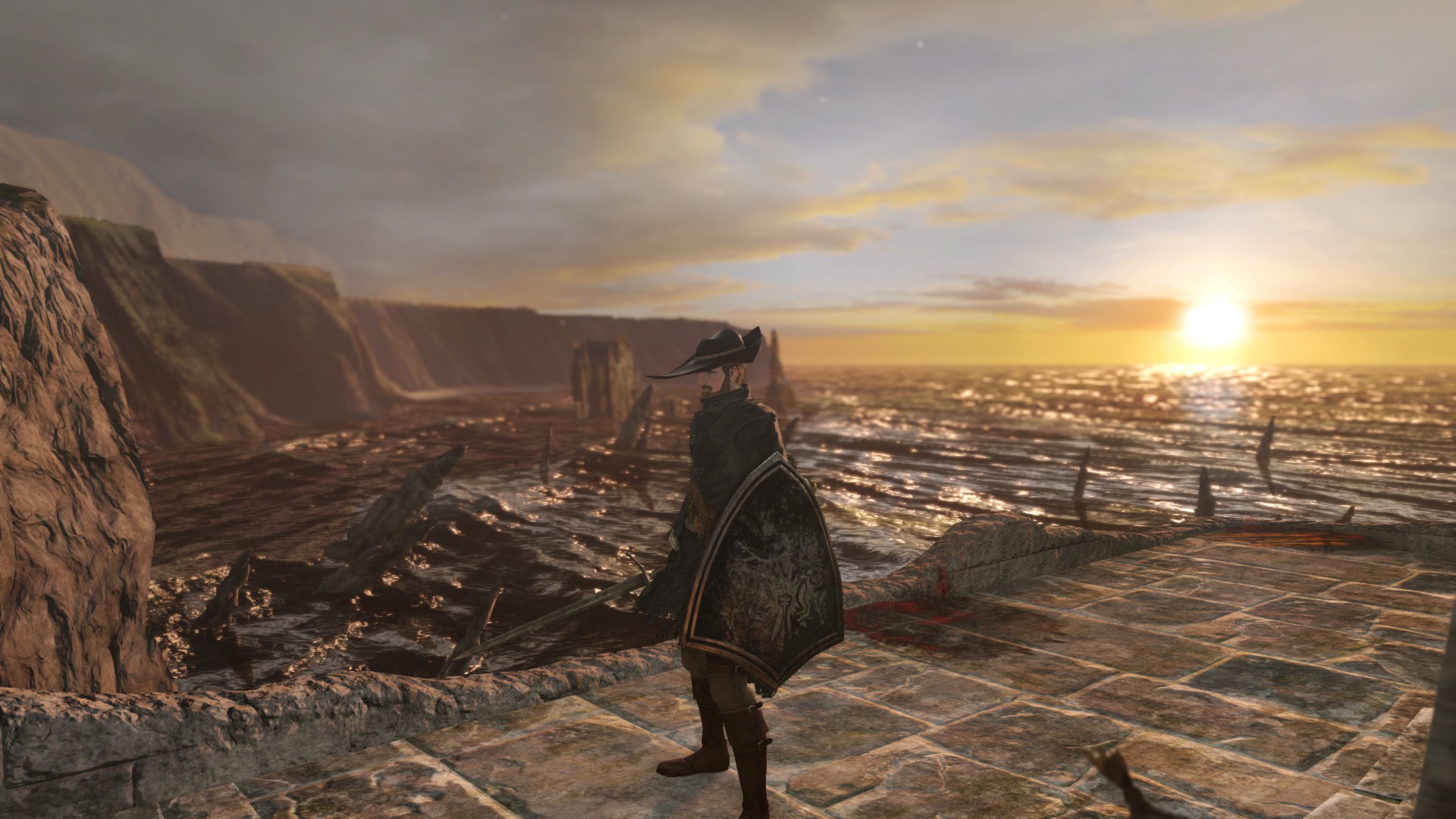 Dark Souls came out of nowhere to become one of the best RPGs of the decade, offering heaps of challenge, an oppressively immersive world and a creative menagerie of enemies and bosses. Where the original was a slow burner, Dark Souls II has been on the collective gamer’s conscious for some time. Now that the game is out, it’s time to see if Dark Souls was a one-off critical success or if the sequel can preserve that unique cycle of challenge and satisfaction that made the first game so compelling.

Dark Souls II begins similarly to its predecessor; a weird cutscene plays, you create your character and move into the world, unsure of the impact of your choices and exactly what is in store for you. Handholding is limited to an early tutorial area with helpful messages on the ground penned by the developers; later these will be replaced with warnings and commentary from fellow players. 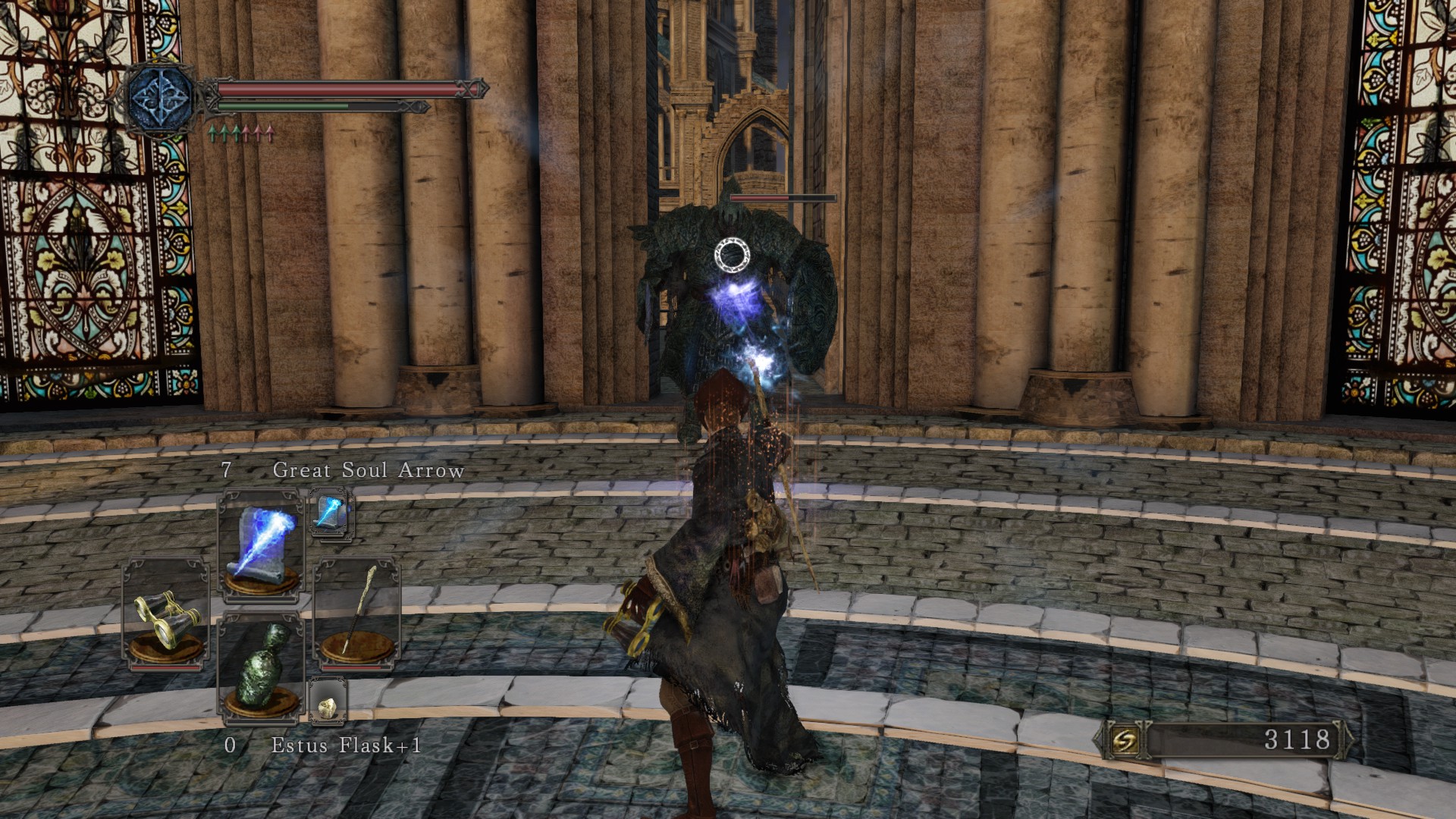 Right from the fore, you understand that this game is as challenging as its reputation suggests. While enemies are difficult to defeat as you begin, the real enemy is inattention: meander through an area distractedly and you will be assured a quick death. It might be from falling off a cliff, it might be a giant ogre crushing you flat in a single attack, it might be a weak enemy stabbing you in the back while you’re distracted. Like other deep games like StarCraft or DOTA 2, retaining focus is crucical. With this engaged, you’ll find yourself able to progress though the world and find those motivating victories that keep the game fun.

The world is divided into a series of areas, to be tackled as you see fit. You’ll quickly come to the last bastion of humanity, from which you’ll strike out to explore more dangerous areas and defeat their bosses. Of course, this is Dark Souls: even the safest area in the game has a giant pit to fall into, a trio of pigs that can savage an unprepared player and a few skeletons in the basement. 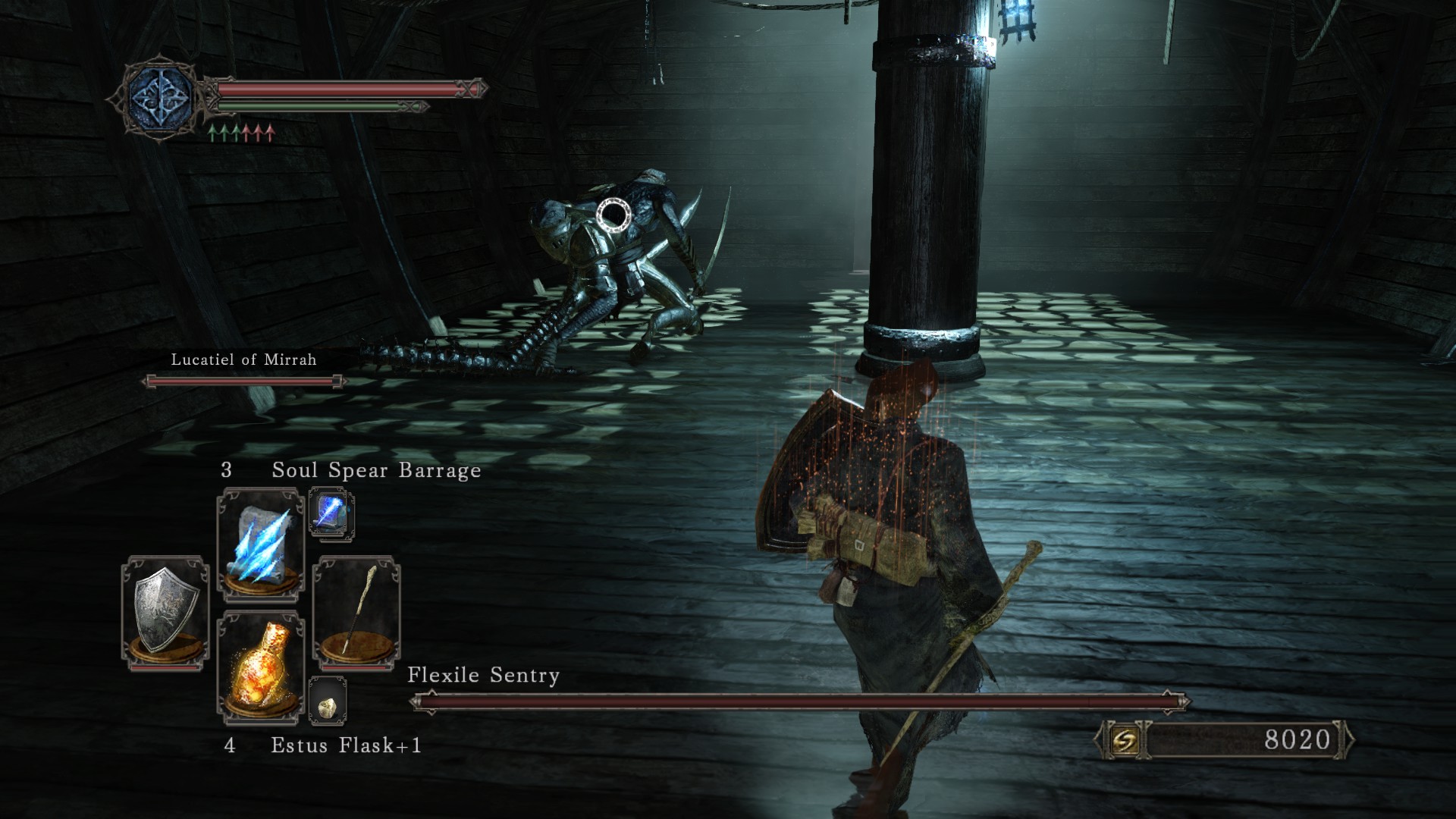 One of the more interesting bosses; a double-torsoed chap with two sets of weapons

One of the things that set Dark Souls apart from other RPGs was its creative managerie of enemies and bosses. In Dark Souls II, there are few entirely new opponents – instead, many bosses are simply “big guy with sword.” There are also a fair few bosses that have been appropriated from the original, like one half of the famous Ornstein & Smough (attourneys-at-law) duo and the gargoyles from the roof of the cathedral.

These have been nice nostalgic moments for Dark Souls veterans, but instead they feel like cheap imitations. Not-Ornstein is heavily neutered compared to his DS1 counterpart, and the fight lacks the unique duo dynamic that made it interesting. The gargoyle fight goes the other way; From Software just pile on five of the creatures, which necessitates a longer version of the same fight. It’s a lazy approach; I would have much rather seen either entirely new bosses or significant evolutions that made me adopt a new strategy.

The other big change from Dark Souls is that farming is no longer an easy strategy for progression. I spent a good two hours at an early bonfire in that game, clearing out the same group of enemies and returning to the bonfire to respawn them. In Dark Souls II, enemies will begin to stop spawning after you kill them a dozen or so times, preventing you from becoming too powerful early on. 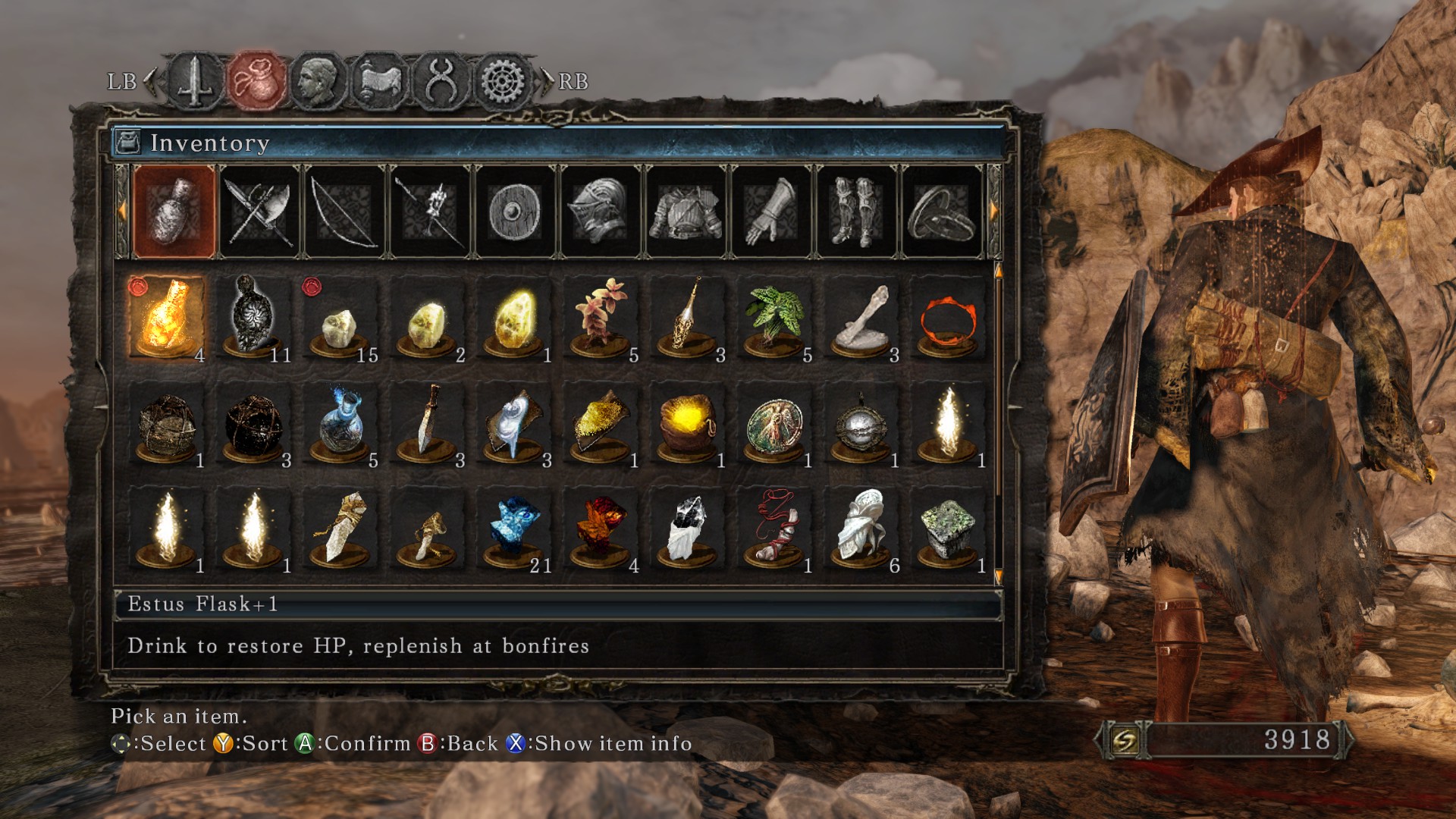 Another happy side effect is that if you can’t make it to a boss with enough of your health and healing items intact, you can just methodically clear the level of enemies, then challenge the boss unmolested. While “loser clearing” rooms doesn’t feel great, it’s definitely an improvement over dying to a particularly difficult set of enemies over and over again.

The final big change from the original is a return to the hub world system of Demon Souls, which requires you to return to the game’s only populated village to level up, repair your items and visit most merchants. This is paired with immediate access to warping, allowing you to travel from bonfire to bonfire in the blink of an eye. 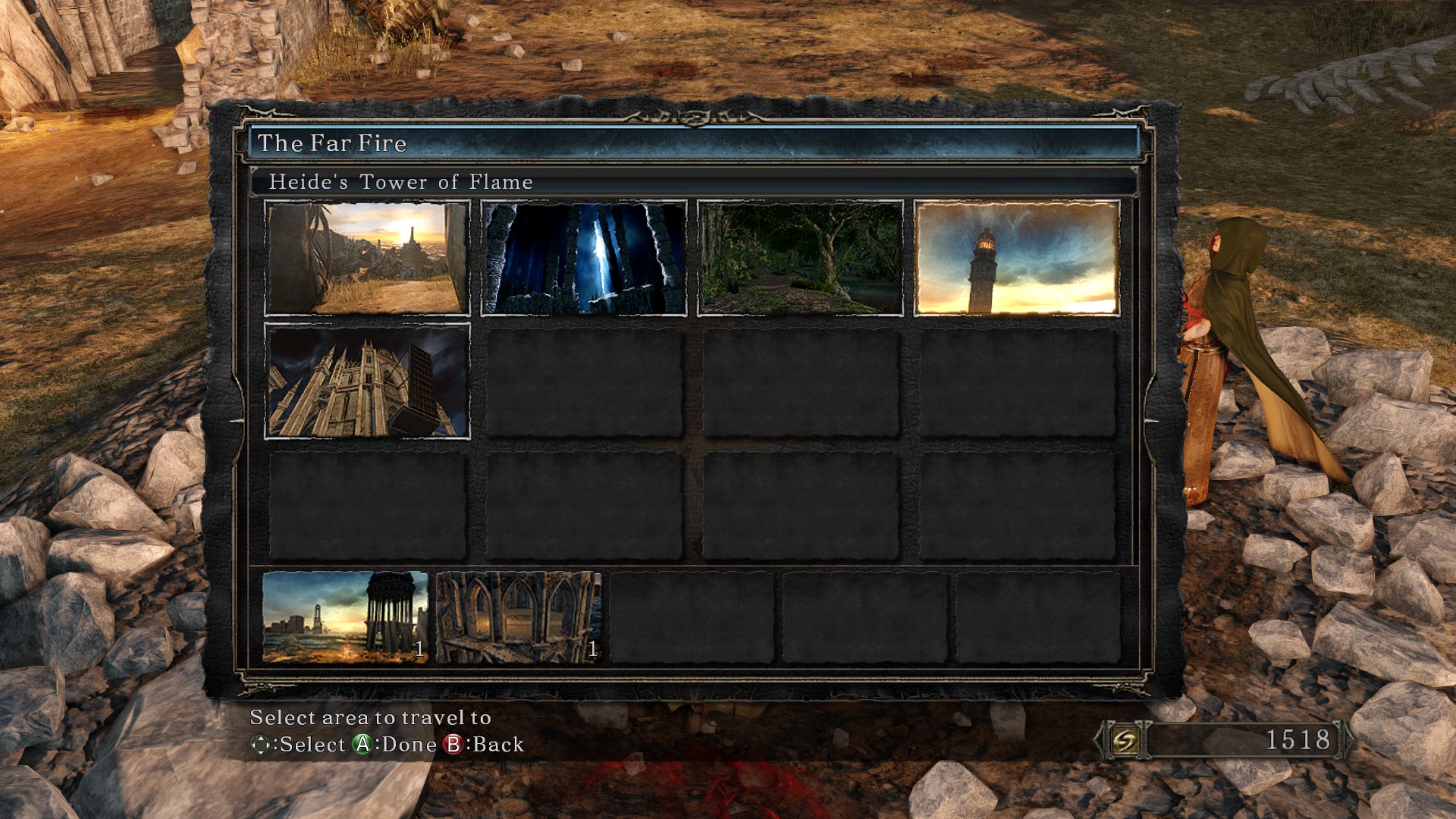 While it makes for a more streamlined experience, it also ruins the oppressive, gritty feeling of the original Dark Souls world, where each trip to Firelink was fraught with peril and required your full attention.  It’s hard to feel too put upon when you know you can warp out and try a different area any time you like. This also means you lose the intimate grasp of the world’s topography gained in the first game; instead the world blends together into a mix of themed locales.

For better or worse, these locales are generally more open and cheerful than their predecessors, although dark and trap-laden areas certainly still exist. The early seaside areas are particularly memorable, offering nice views that serve as an effective palette cleanser after spending time in too many dark passages. None of the areas seem quite as hard as their Dark Souls antecedents, but there’s still some potential for controller throwing here. 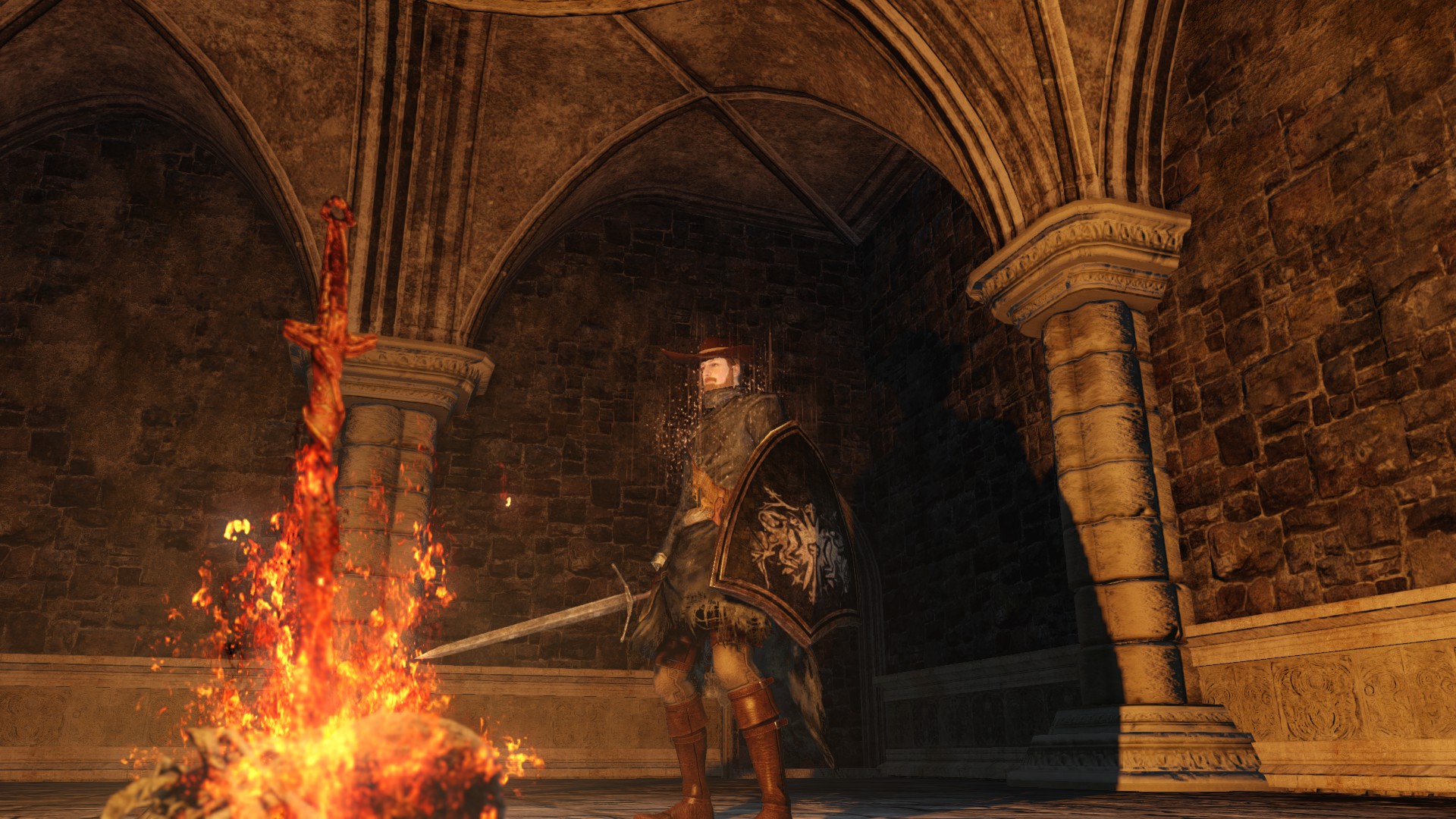 Bonfires are still a major theme

Speaking of controllers – while you may be tempted to get the game for PS3 or 360, you should play this game on PC if at all possible. It’s easy enough to plug in a 360 controller (or get your PS3/PS4 controller working instead), and you’ll get a much better experience overall. The game looks simply fantastic here, particularly at 1080p resolutions and beyond. Being on a PC also means you can install the game to an SSD, speeding loading times from ~30 seconds on PS3 to ~3 seconds… a big deal given how frequently both deaths and travel can come in this game. 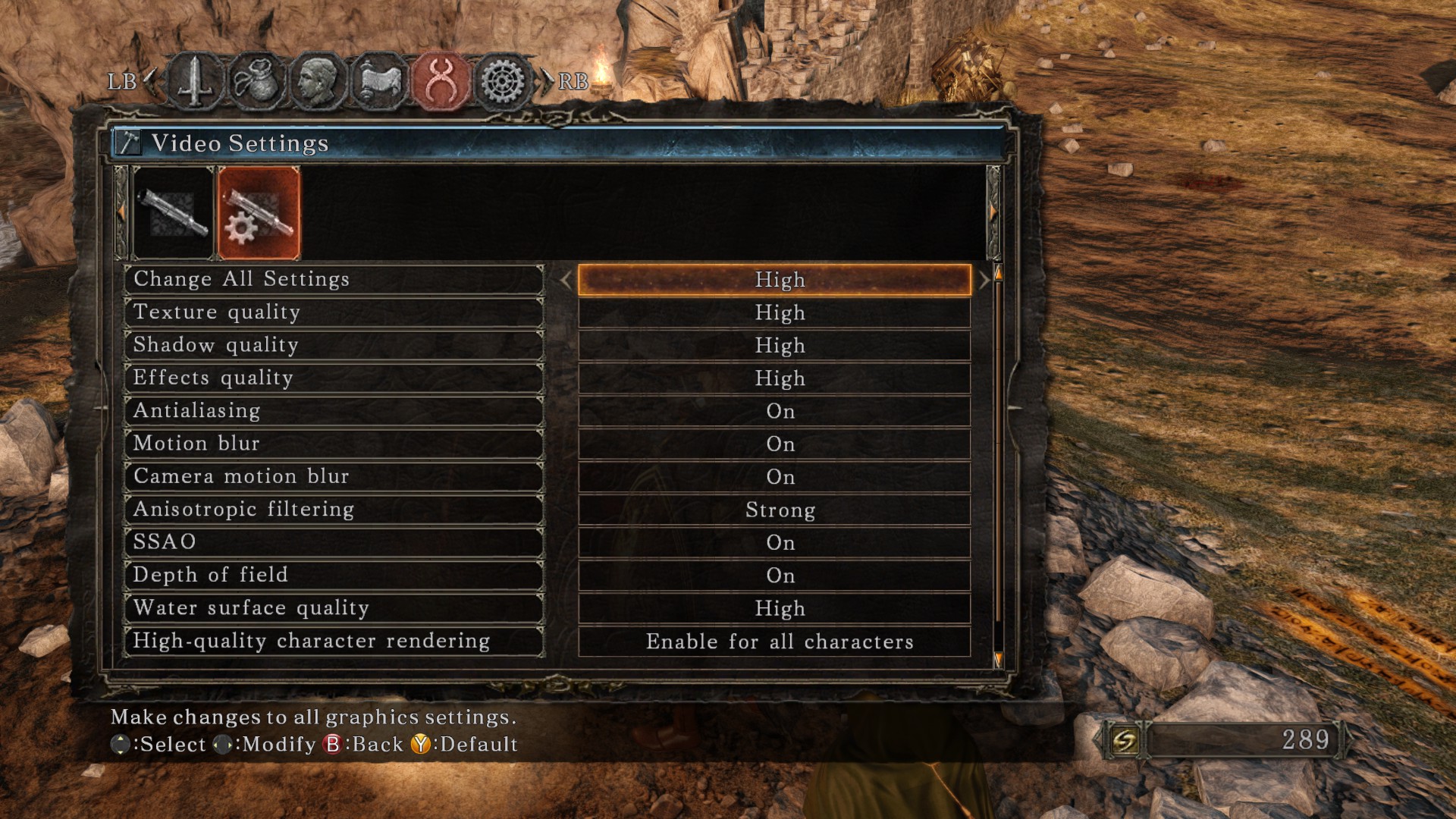 Dark Souls was a big PC disappointment at launch, so it’s great to see that From Software have taken things seriously this time around. That means graphics are rendered at your chosen resolution, controls and effects are easily configurable, and online play (sans GFWL) works without a hitch.

Jolly cooperation seems easier this time around, and provides a useful source of both mid-run heals and extra souls… and it’s fun too. If you’re willing to summon help, all bosses become much easier as well, and I found a willing population whenever I took the plunge. The game is infinitely more satisfying without summoning (as most bosses become a little too easy), but if you’re beating your head on a brick wall it’s a useful option to have. 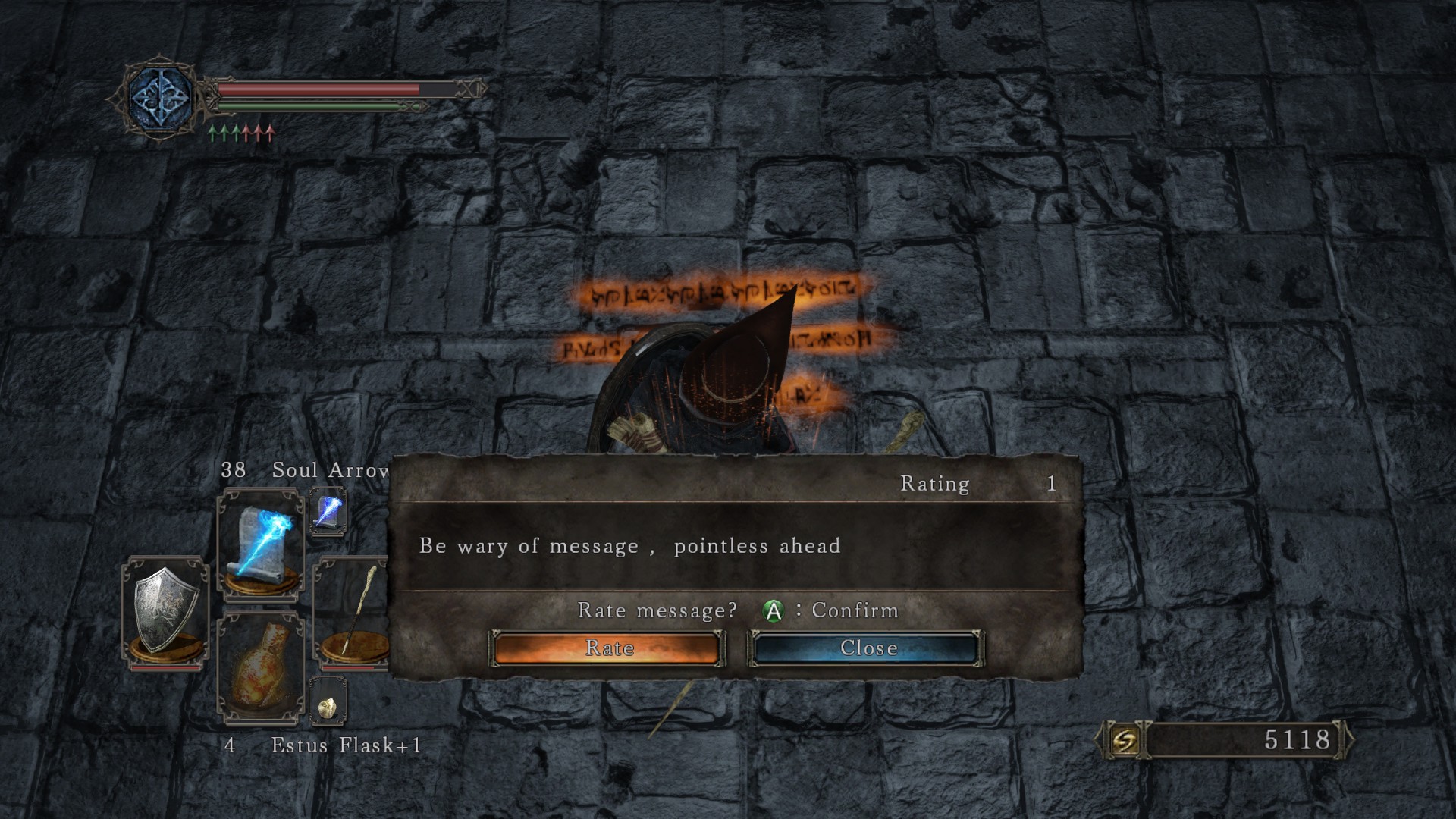 Mechanically, Dark Souls II is as strong – or stronger – than its predecessor. Melee combat remains satisfying (if less effective than magic), and your character’s smaller stamina pool forces you to choose your actions wisely. Bosses hit hard but can be blocked and evaded. An early dearth of 100% effective shields suggests a more mobile strategy early, while fewer frames of invincibility while rolling demand better timing here too.

There are more weapons here to experiment with, and dual-wielding is possible for the first time too. There are certainly a lot of avenues to explore here for both PvE and PvP, and thanks to a few rare items you can even reset your stats mid-game to try a different approach. I generally found myself changing things up much more often than in DS1, where I found a weapon an hour in and used it until nearly the end of the game. 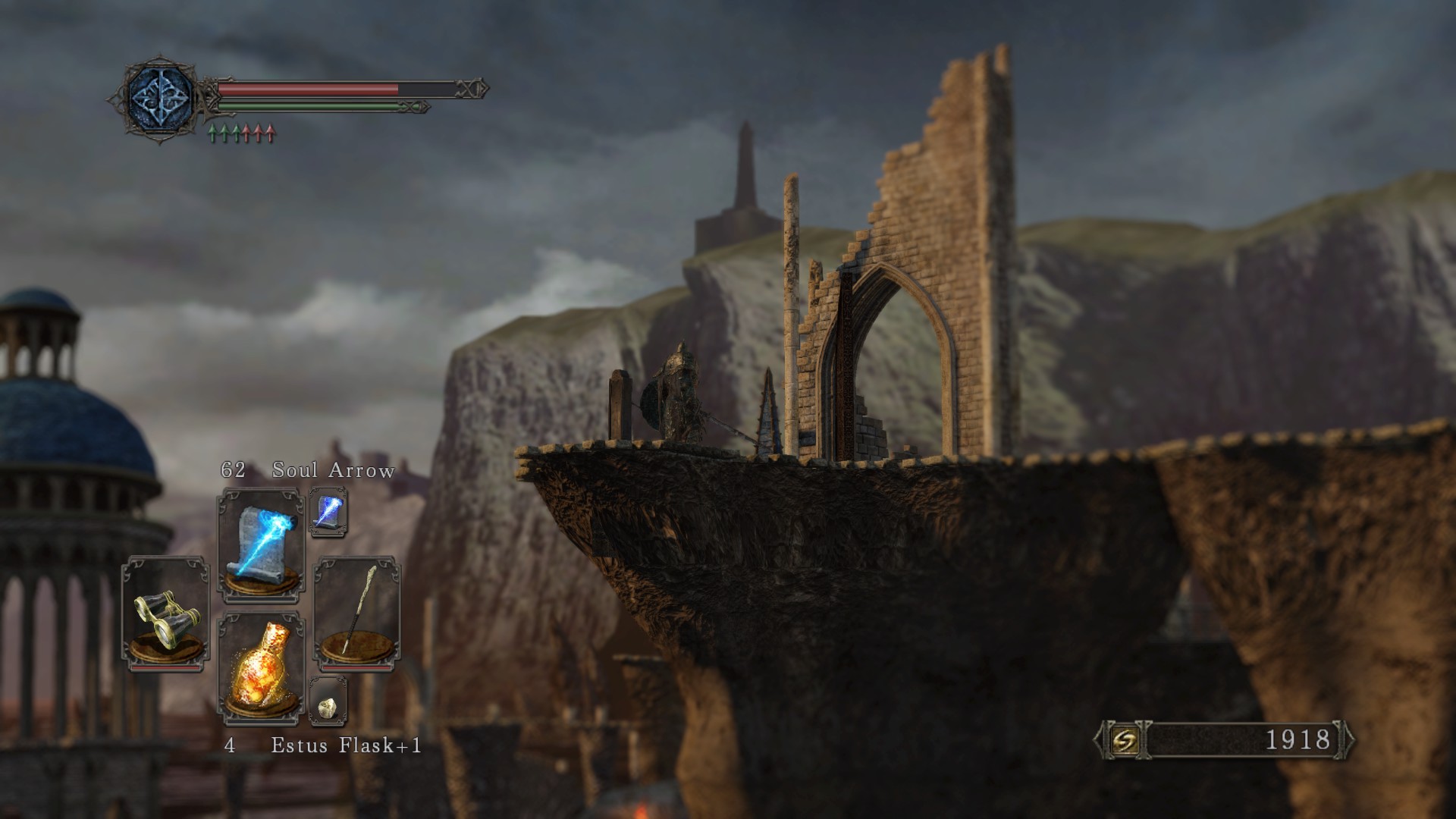 While the game feels deeper, I get the feeling that there are few gameplay advancements here; the game almost feels like a standalone expansion to the original Dark Souls rather than a new game in its own right.

It feels as though the new development team were too constrained in their design of Dark Souls II, too unwilling to introduce new elements after the runaway success of the original Dark Souls. Indeed, many of the changes to the game are nothing more than ideas from Dark Souls’ spiritual predecessor, Demon’s Souls.

The improvements made here are evolutionary as a rule; there are no truly outstanding gameplay revolutions to be found. That makes for a less exciting game overall, particularly for Dark Souls veterans that will be familiar with many of the enemies and locales in the game. 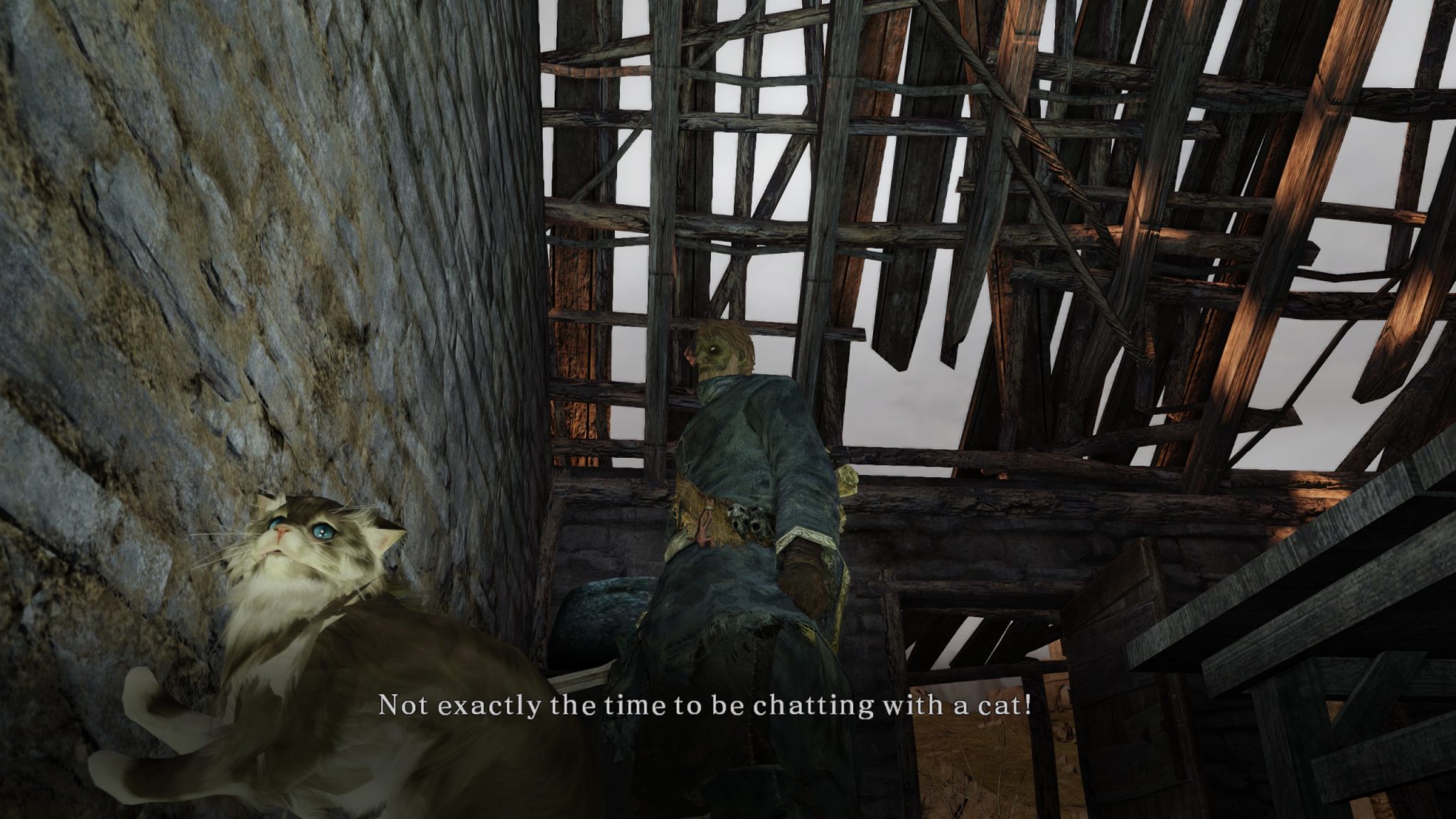 There are some pretty amusing moments in Dark Souls II, not least speaking to this cat.

While I can’t praise the game’s innovation, I can at least praise its execution. Dark Souls II is a rewarding game to play, from the small moment-to-moment victories to the release of tension after a hard boss or area has finally been cleared. The game is also boasts a much stronger technical implementation than its predecessor; particularly on PC where the graphics sing, solid state drives reduce loading times considerably and you have your choice of controllers.

Whether you’re a newcomer to the series or a veteran, Dark Souls II’s challenging depths are well worth experiencing. It may not have achieved our highest hopes, but it’s still brutally, beautifully Dark Souls.

Over the past couple of days I’ve been playing Qbeh-1, a first-person puzzle platformer by indie studio...