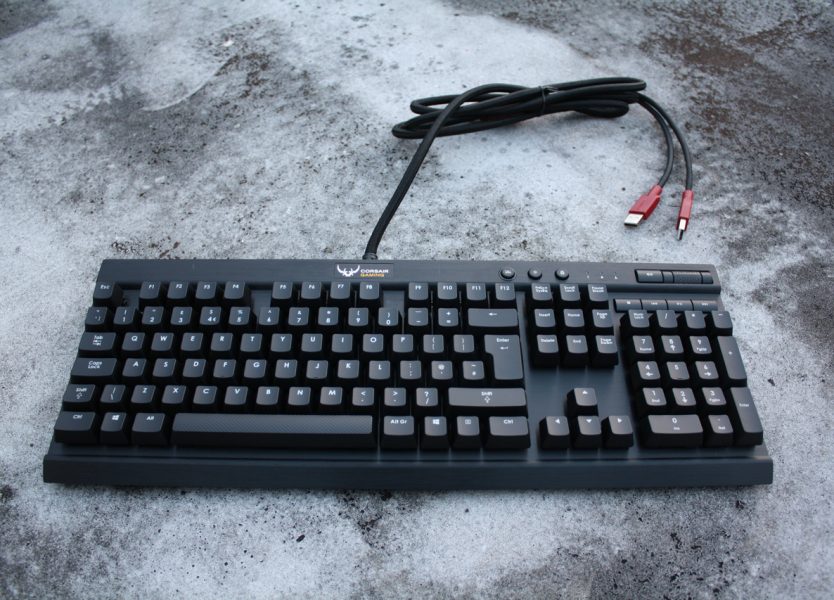 This new keyboard sits between the K60 and K90, offering a full layout of mechanical Cherry MX red switches, new black and gunmetal finishes and a full-size palm rest. Today, we’ll be seeing how the new keyboard compares, both to its predecessors and to other mechanical gaming keyboards on the market. Let’s begin! 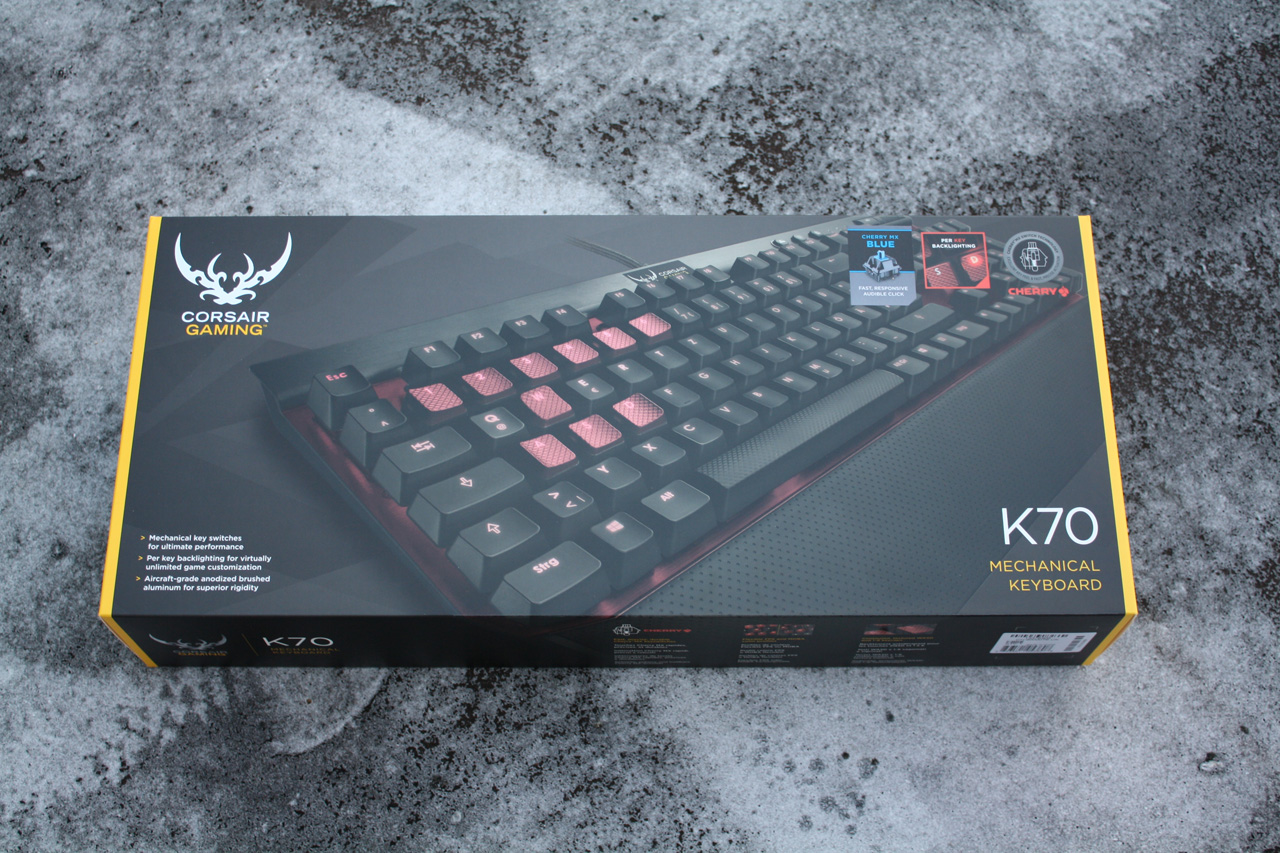 As ever, Corsair package their keyboards well. The Vengeance K70 is ensconced in a large cardboard box, featuring photos of the keyboard inside and its major feature points. 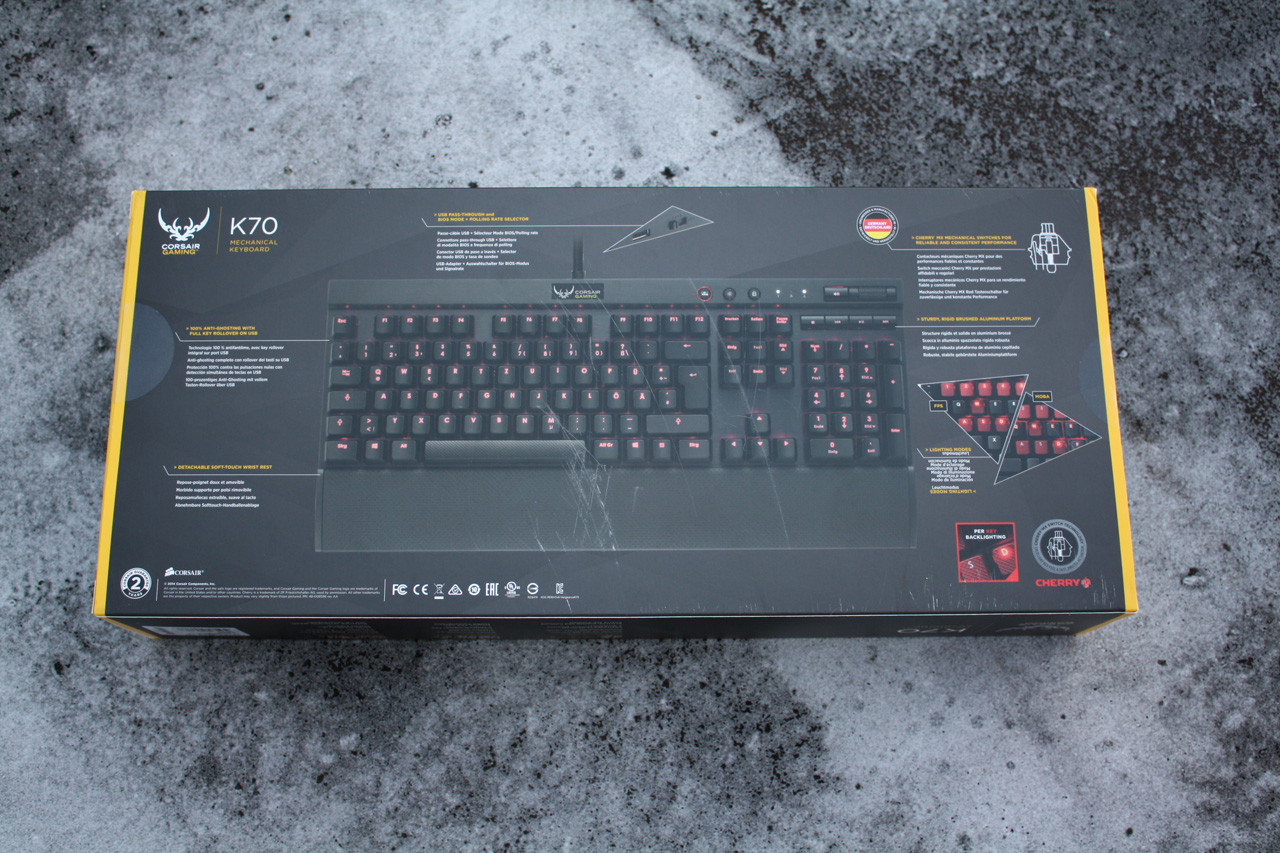 The K70 features Corsair’s new logo, which has encountered some resistance online due to its ‘tramp stamp’ appearance. I personally prefer the classic sails design, but the new logo honestly isn’t that bad. 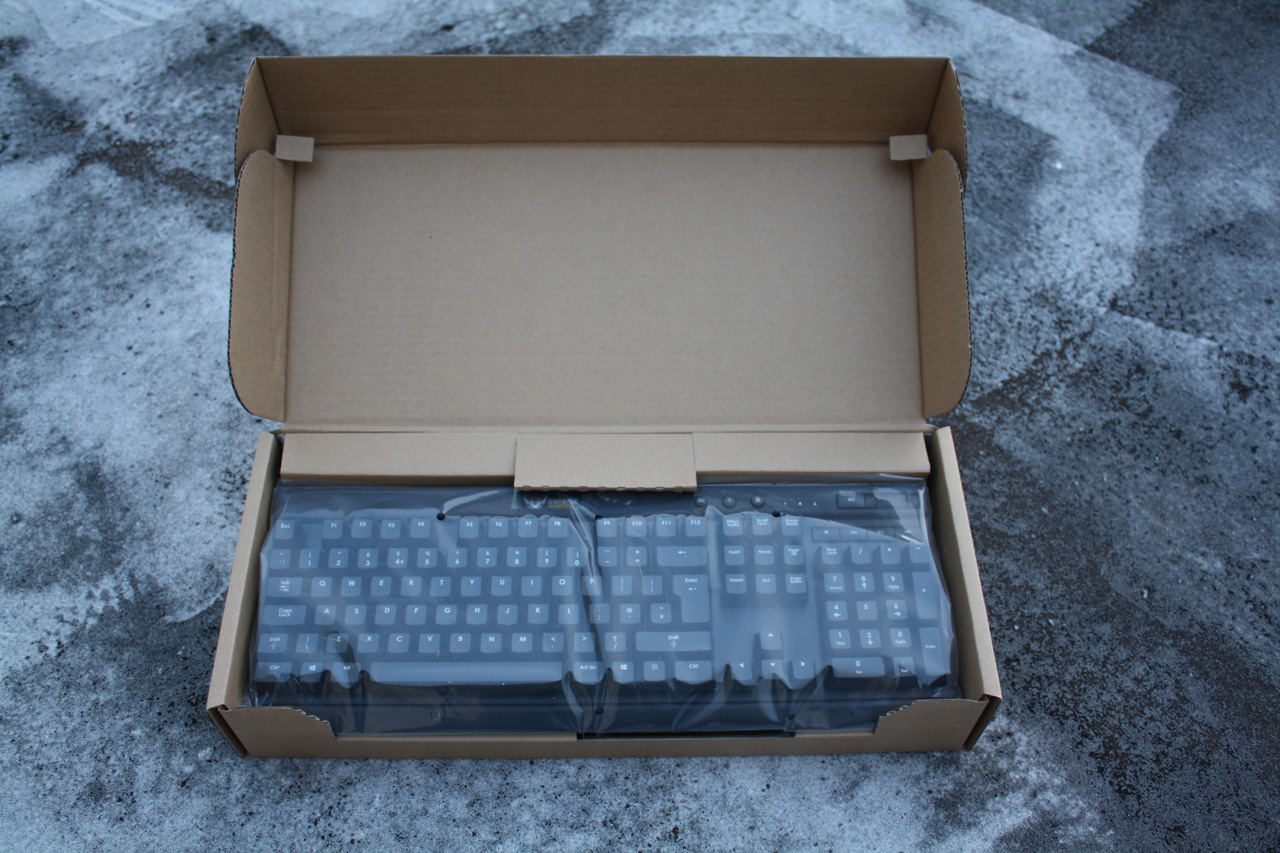 In the box, you’ll get the keyboard itself and the usual literature. You’ll also find a key puller, which allows you to easily install the textured replacement keys. WASD and 123456 keys are provided, which of course are largely used in shooter titles for movement and weapon selection. The final item is the palm rest. 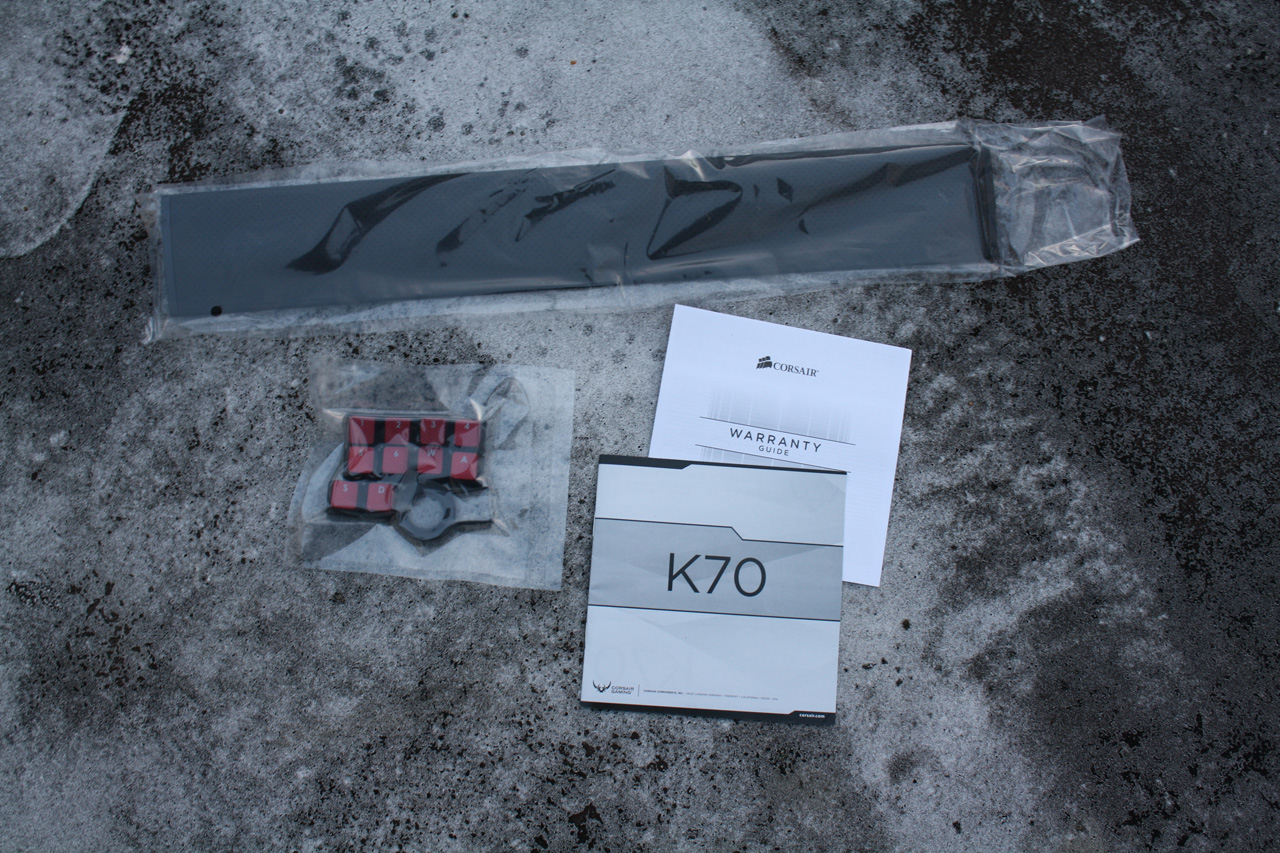 The Corsair K70 makes a good impression from the moment it sits on your desk, thanks to its rugged aluminium frame. The black model that I’m reviewing is a little less distinctive than the silver or gunmetal colour options, but it remains an eye-catching keyboard. 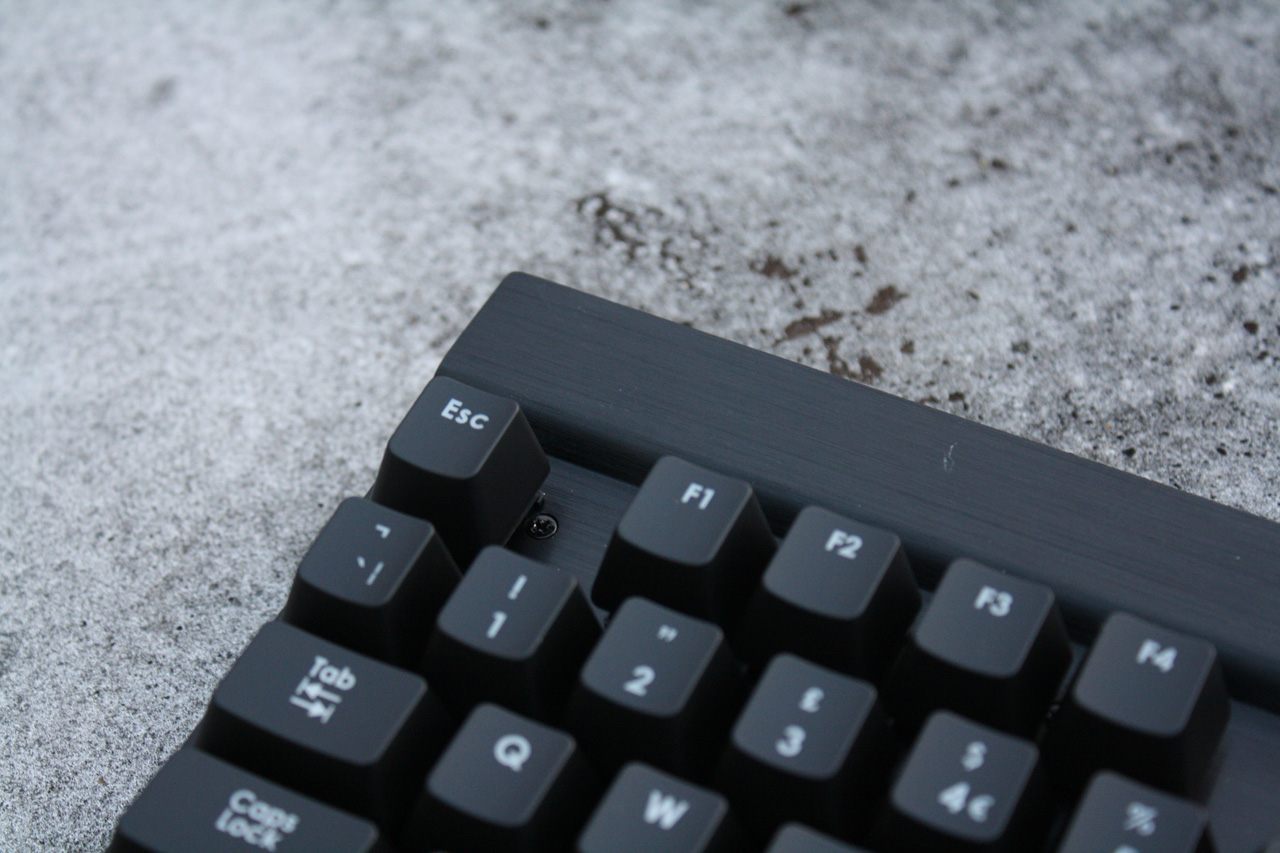 Once you turn on the backlighting, the K70 becomes even more impressive. We’re not looking at the RGB model of the keyboard, but the red backlighting present on my review unit looks great. Out of the box, you can select to have the WASD, 123456 and up/down/left/right keys lit, the full board or no backlighting at all. 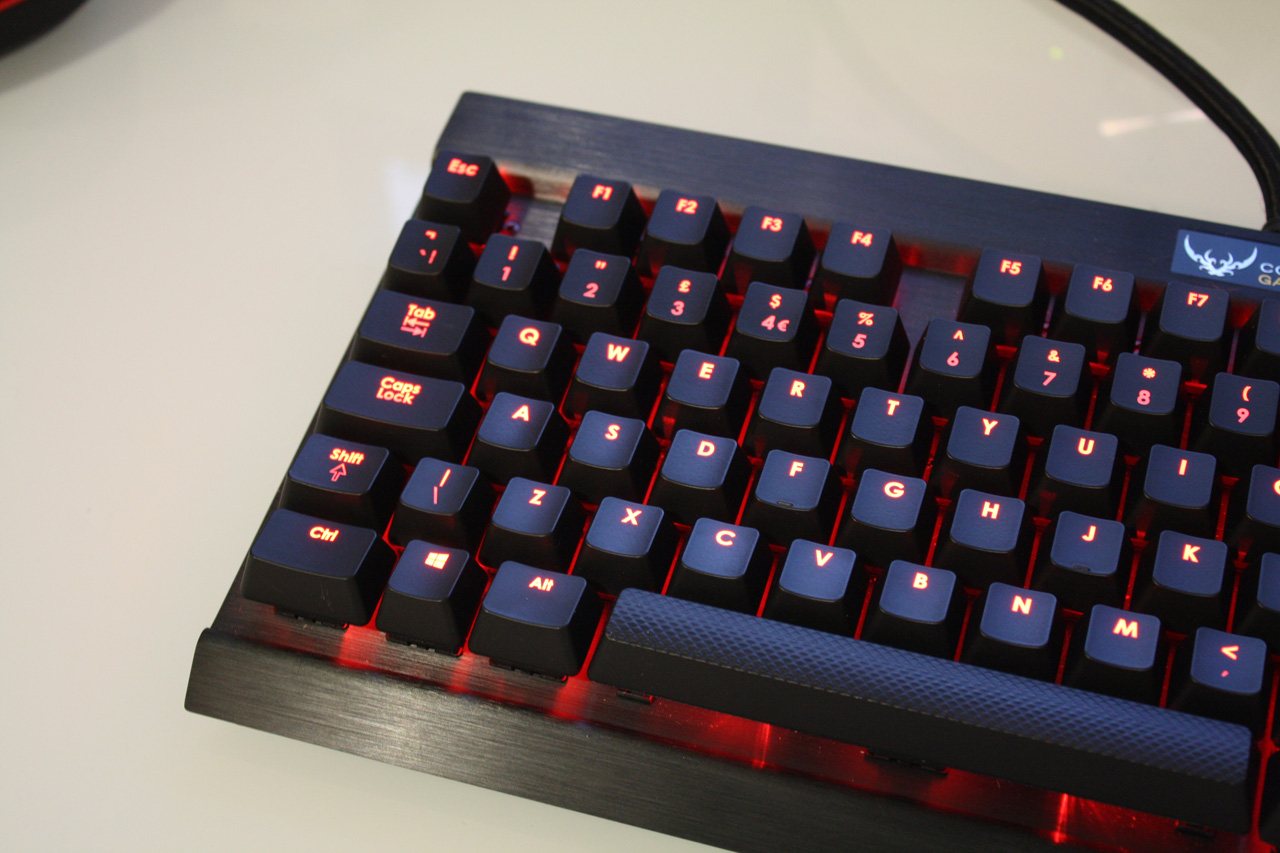 You can also press the backlighting key for a few seconds, then press any key to toggle whether it is backlit or not. This is great for picking out just the keys that you need to use in a particular game, particularly strategy or sim titles which rely on a large set of keys. 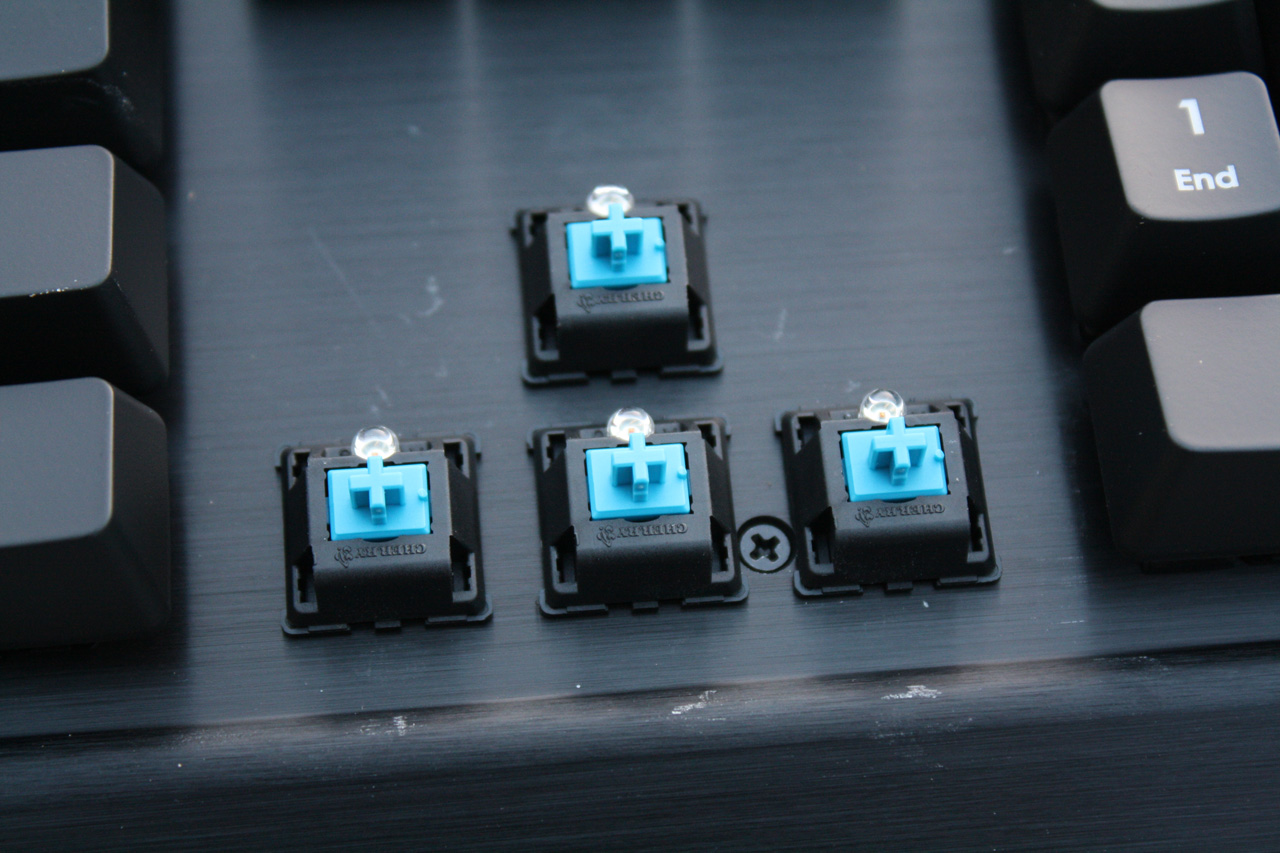 The Corsair K70 uses a standard layout, with all the main keys laid out in the same arrangement and order as the majority of keyboards on the market. The one change to this main keyset comes in positioning; the spacing between the first two rows on the top of the keyboard is smaller than usual. This creates space for the additional keys that sit above, and doesn’t seem to affect usability in any meaningful way. 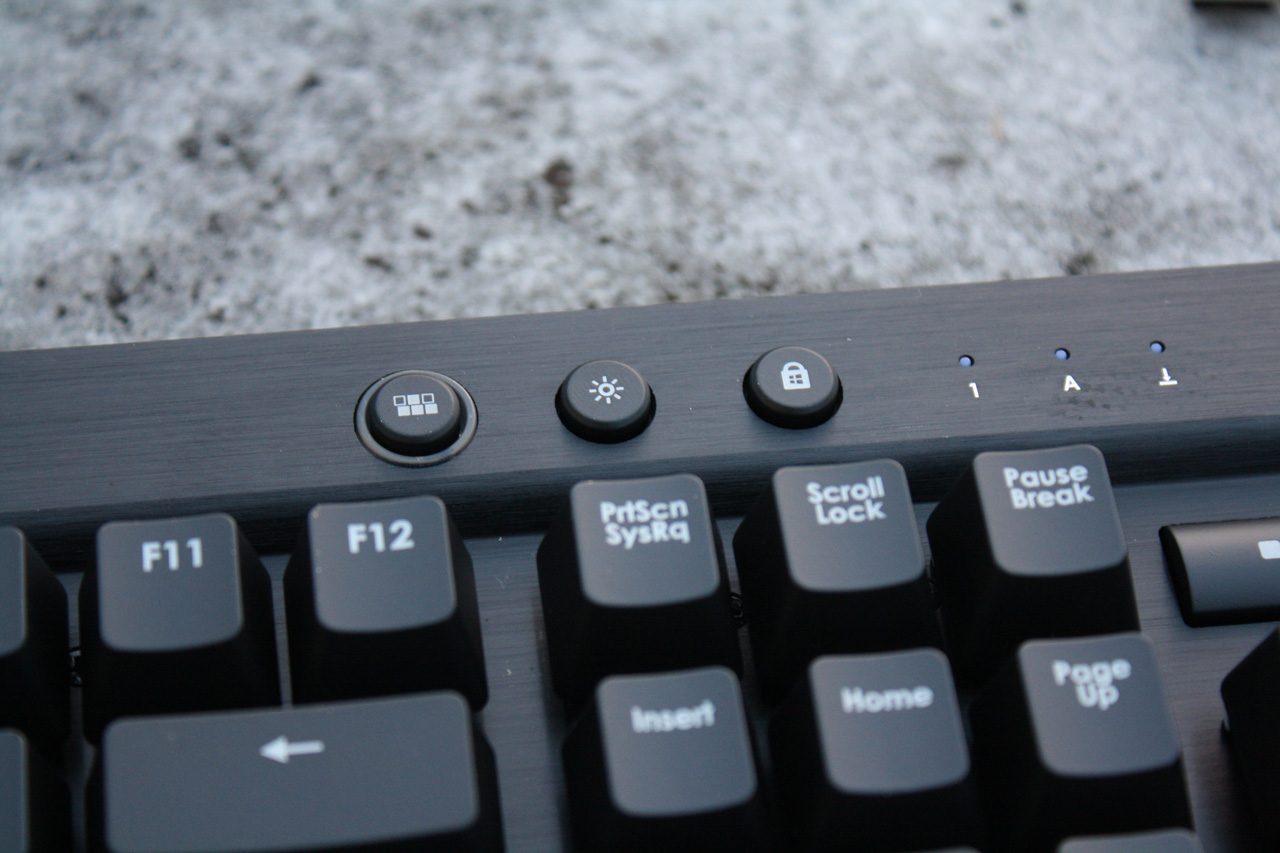 Instead of using a Function key and layer, additional functionality is provided through extra keys. A ridge above the top row of keys holds a few small circular keys on the right hand side, which control which keys are backlit, the backlighting brightness and lock the Windows key, respectively. 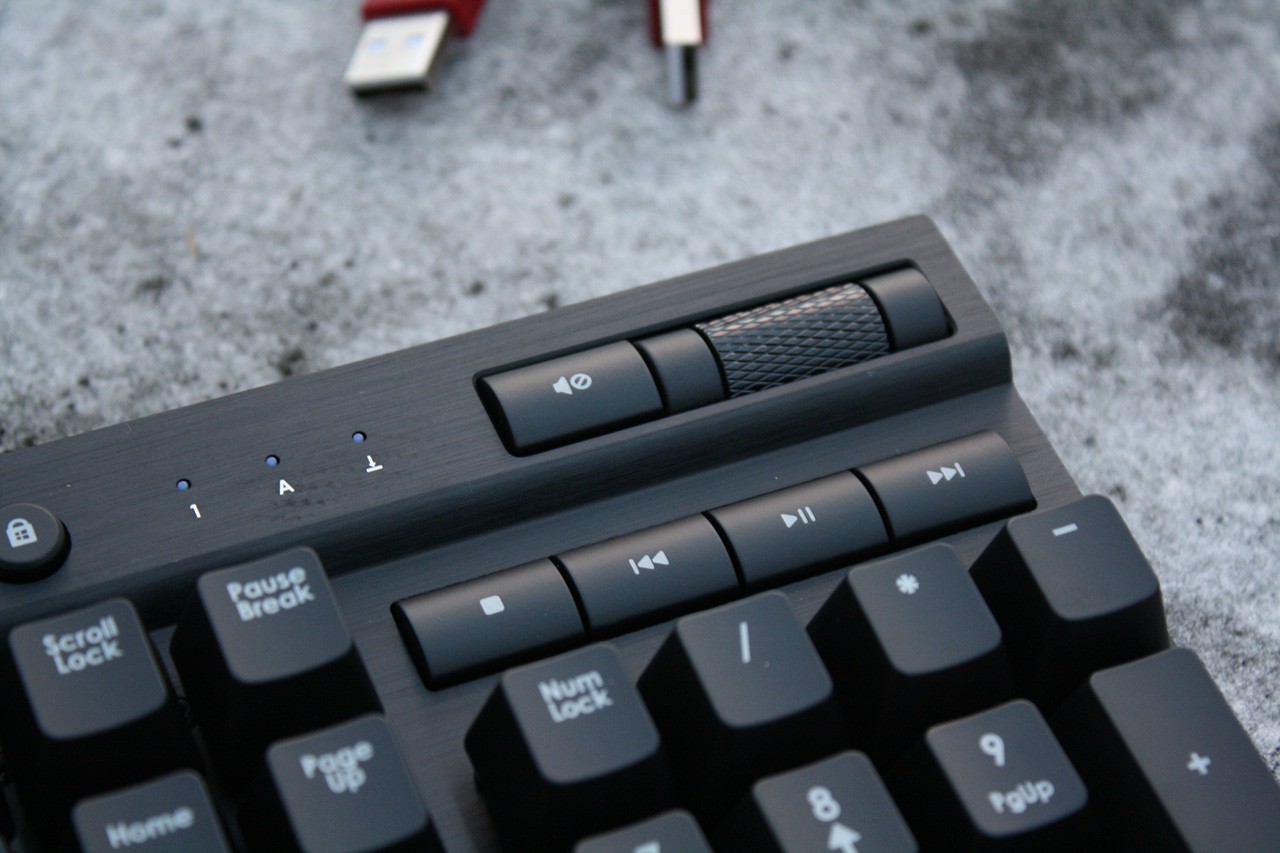 Further to the right, we have a mute button and a metal volume roller – an unusual touch for a keyboard, but a great one. Below these two, we have four more multimedia controls: stop, skip back, play / pause and skip forward. 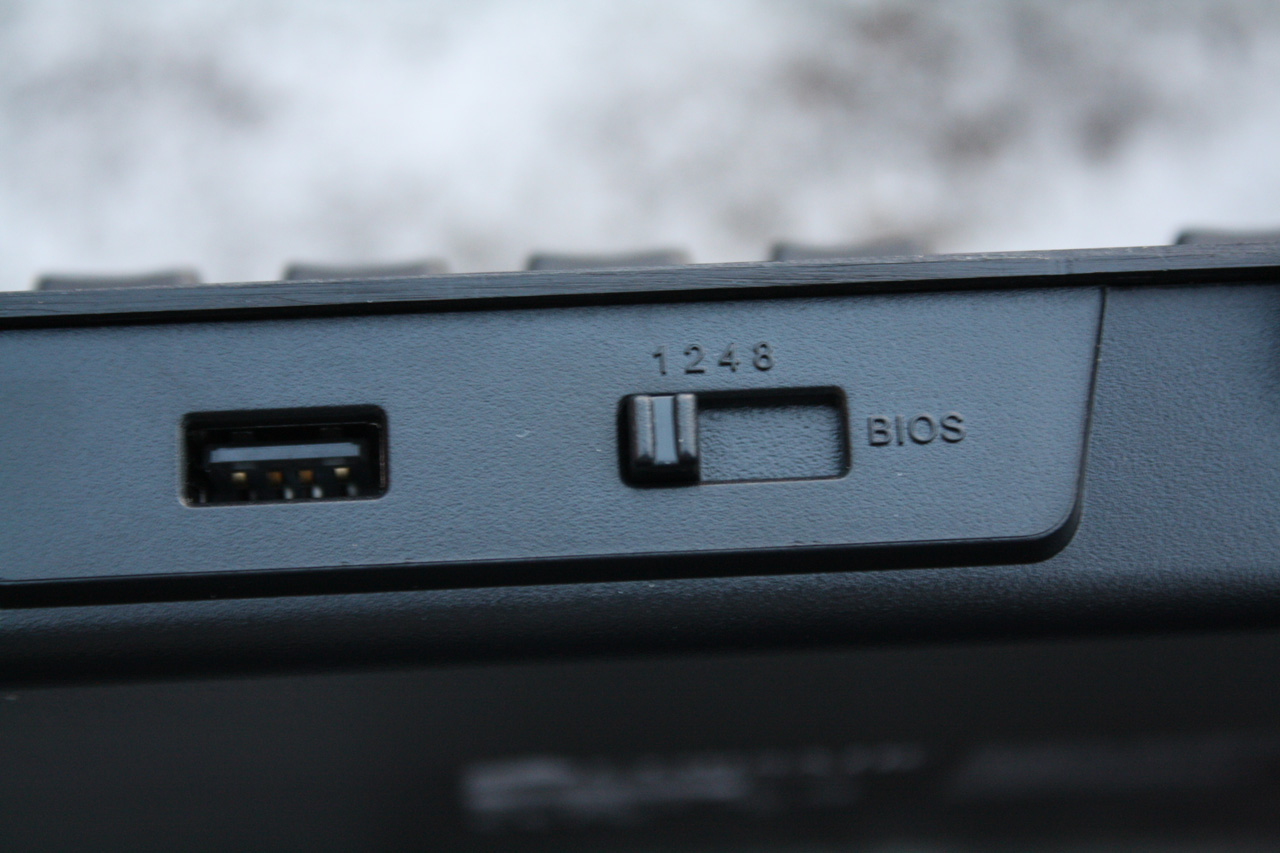 The back of the keyboard also includes an unusual switch, which allows you to choose the keyboard’s polling rate. The default 1ms setting should be fine for almost all uses, but it’s nice to be able to change it if necessary. There’s even a BIOS setting which allows the keyboard to work in legacy BIOS as a standard 108-key keyboard. 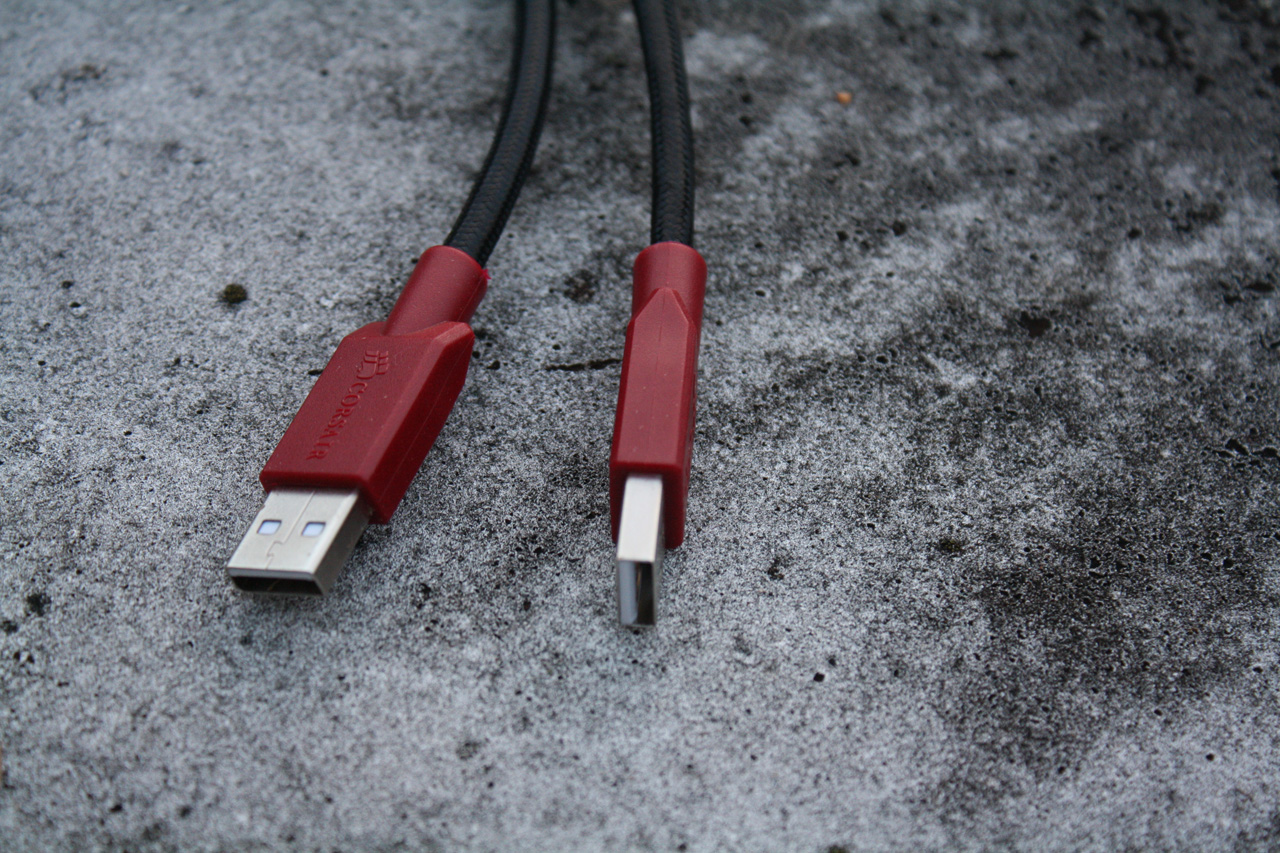 The K70 requires two USB ports for the passthrough to operate properly. The cable is heavily braided and feels very durable. The ends are coloured a nice maroon colour that makes them easy to differentiate even in the dusk under your desk. 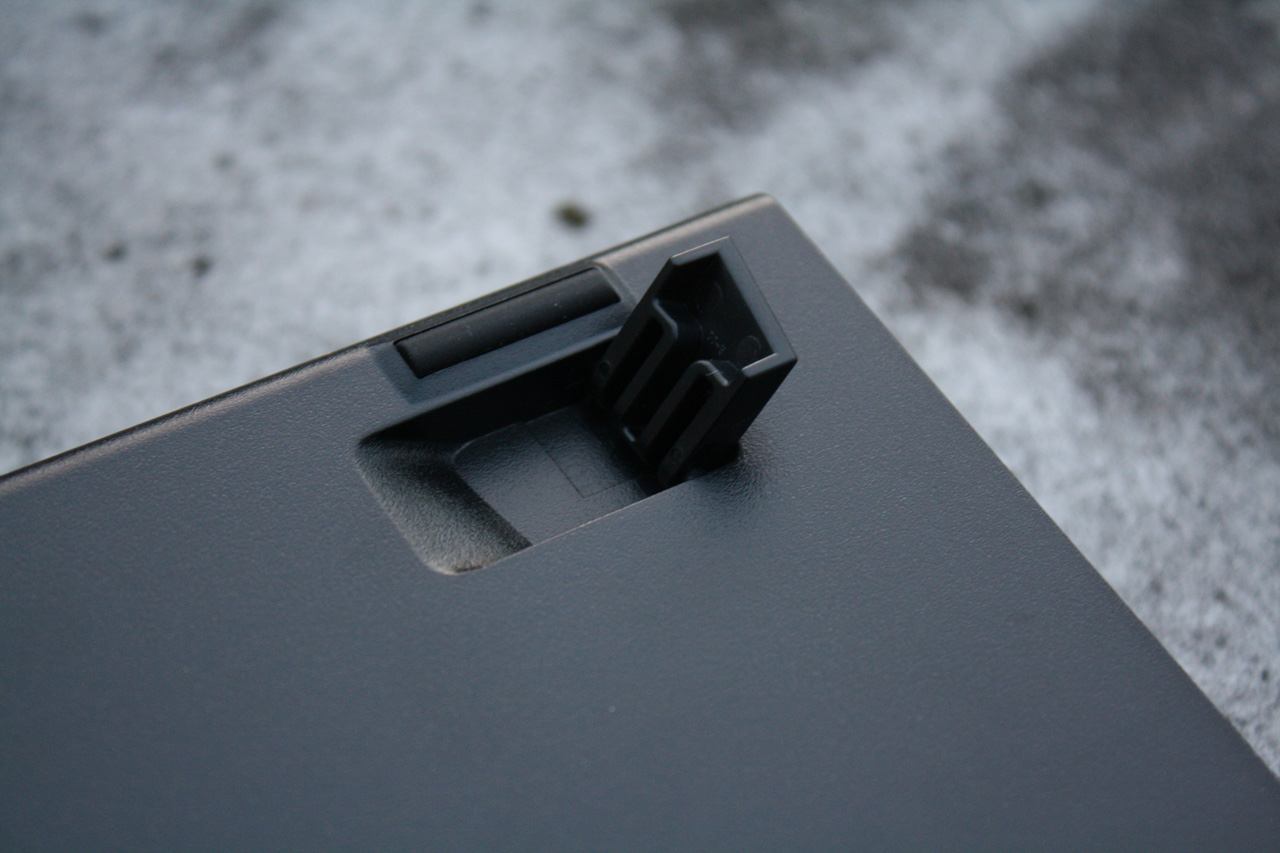 The bottom of the keyboard has two flip-out legs at the top edge to provide a bit of a slope to the board, plus two further taller legs which are used with the full-length palm rest.

The soft-touch palm rest is quite comfortable, and attaches easily to the keyboard.

There are no dedicated macro keys here like the K90 and K95, which means the keyboard is less wide and is able to fit better on small desks. If you’d prefer an even more compact board, then the K65 might be a better shout – it forgoes including a number pad, and is therefore called a tenkeyless model.

I used the Corsair K70 for a period of about three weeks as my main keyboard for gaming and writing. This included writing tech articles and playing a good range of video games. Counter-Strike: Global Offensive (a shooter) is my current go-to title, but I also tried out StarCraft II (strategy), Heroes of the Storm (MOBA), Left for Dead 2 (shooter), Elite: Dangerous (space sim) and Company of Heroes 2 (strategy).

This keyboard is marketed primarily towards gamers, so let’s cover that angle first. The Cherry MX Blue mechanical switches provided in the review unit are oft-recommended for typing instead of gaming, but the relatively high weighting and excellent aural and tactile feedback also make them well-suited to strategy titles (at least in my mind). If you’re coming from a non-mechanical keyboard, then you’ll definitely feel a big improvement; if you’re used to a different mechanical switch then it’s more a question of taste than anything else.

In strategy games like Company of Heroes 2 and StarCraft II, I found the keyboard a useful companion, able to keep up through intense periods as well as the beginning of the game. I didn’t expect as good performance in shooters like Counter-Strike, but I actually quite missed the keyboard in Counter-Strike when I switched to another after the test period was over.

The standard layout and strong backlighting was a big help in each game I tried. I did make use of the palm rest and textured keycaps in shooter titles initially, but I ended up removing both as I didn’t find them too useful. Still, it was nice to have the option.

Another useful inclusion was the ability to set custom key backlighting patterns, which was good in games like Elite: Dangerous where I didn’t know the full key mapping off by heart. With all the keys used in the game lit, I could at least better guess where a little-used command could be found on the keyboard.

Overall then, no complaints when it comes to gaming.

For writing, the Corsair K70 proved equally adept. The crunchiness of the Blue switches made rapid writing sound lovely, and the tactile feedback made it easy to hit each key correctly. The palm rest was more useful here, providing a little extra comfort that made day-long writing sessions more palatable. The backlighting was also key, letting me work in dimmer conditions without suffering any decrease in accuracy.

I rate the Corsair K70 extremely highly; it’s very hard to say anything bad about this keyboard. It’s well constructed from aluminium and Cherry MX switches, looks great with the red backlighting, and is well laid-out with useful multimedia keys.

In fact, the only real ‘con’ is that Corsair have already produced a more expensive model with RGB backlighting (meaning that you can choose your own backlight colour from hundreds of options, either for the whole keyboard or for individual keys). I’d be tempted to choose that RGB model over this red version, but you might not judge the additional expense to be worth it.

Regardless, the Corsair Vengeance K70 is a brilliant keyboard that offers all of the essential features of a great mechanical gaming keyboard without a single design flaw. That’s why I’m happy to provide the K70 with an XSReviews Editor’s Choice Award. 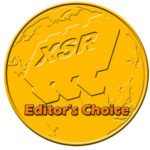 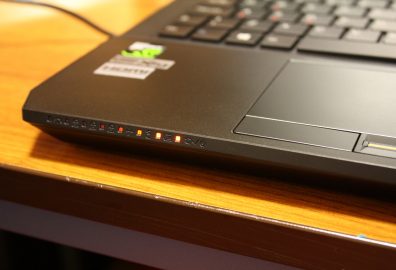 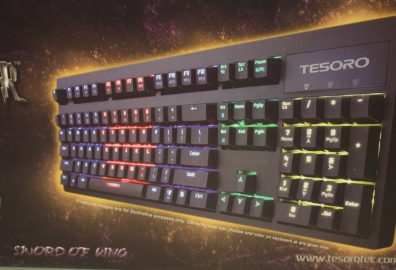