The installation procedure was the same as any fan. The four fan screws appeared to be of good quality and didn’t disintegrate when I used them to attach the fan to my case. The included silicone mounting pieces worked great too. Just running the fan alone I found very little vibration and the silicone anti-vibrational pads remove all of that. After letting the fan bed in for about 48 hours, there still were no vibrations.

Noise is a big thing when it comes to Noctua’s products. The noise is mostly air noise which is good but you still can hear some motor noise. The air sounds turbulent; you can hear the air being cut up by the eleven Stator guide vanes. Running at full speed and listening to the rear of the fan the sound is the kind of noise that won’t just blend into the background very easily.

With my metering kit I compared the NF-F12 to a Scythe Gentle Typhoon AP-15 1850RPM.

With both fans run individually at full speed I recorded 43dB with the NF-F12 and 41dB with the Gentle Typhoon. The fans were 1 meter away and were blowing away from the dB meter.

The noise of the Gentle Typhoon is much easier on the ear, the noise is almost completely just wind noise and because the air has a much easier path, it sounds quitter to the ear even though it’s running at a higher RPM and moving more air.

I ran the fans on a Cooler Master Hyper 412S with an Overclocked CPU to compare the performance in a real life test. Both fans were connected directly to my 12V rail.

The cost of the fan is around £18. This seems quite a lot considering the lacking performance and aesthetics that require a certain taste. The quality is definitely there though, I’m sure this fan will go on to work for a very long time. 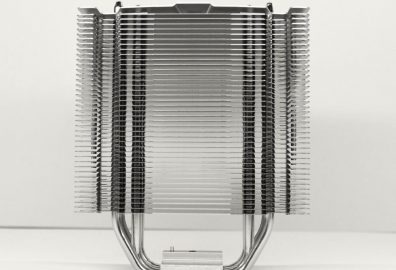 One Response to :
Noctua NF-F12