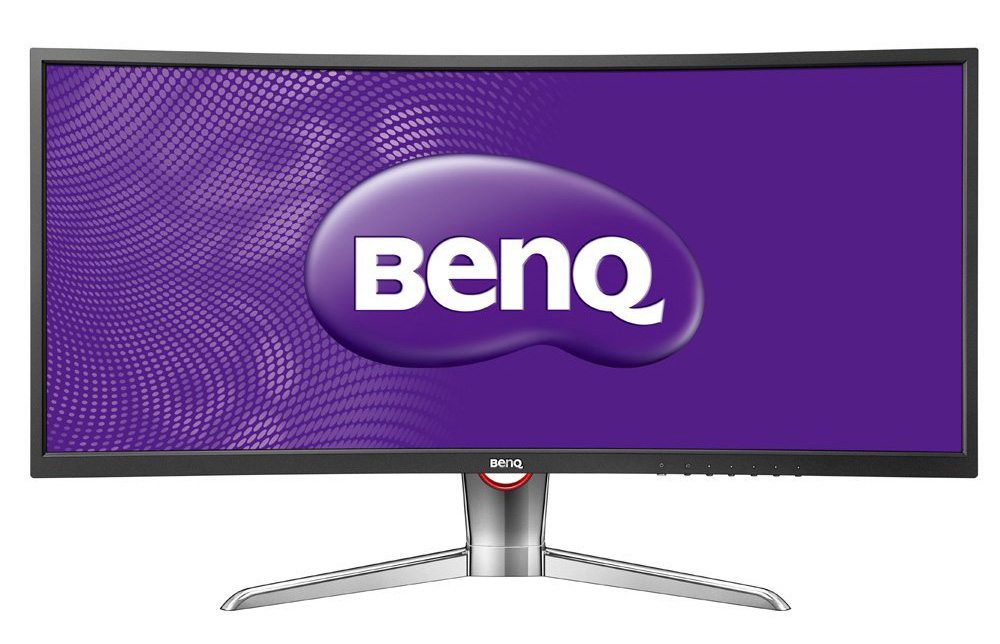 On the 23rd of July, I became a pro gamer. At a BenQ press event, I defeated a field of a few dozen journalists by setting the best lap time in Project Cars at the wheel of a blisteringly fast Le Mans prototype. My prize: an XR3501, an ultra-wide 144Hz gaming monitor. 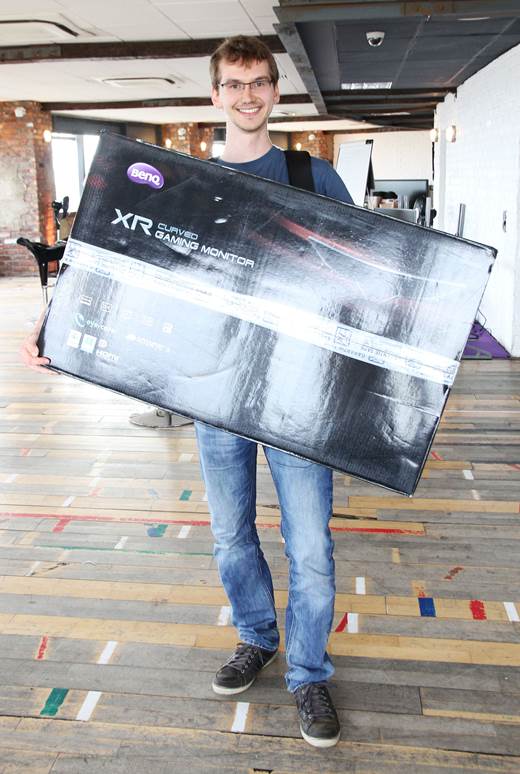 I was so happy that I volunteered to take the monitor back home myself, just so I could show my flatmates as soon as possible. It was a bit of a struggle carrying the 16 kilogram box, but a friend in London and inquisitive strangers made the journey much more fun. Some five hours and four trains later, I finally made it to my top floor flat in Bristol in triumph.

The monitor went straight up on my desk, but to the end of my “to-review” list as it didn’t need to be returned… so consider this a long-term evaluation! Let’s get started by taking a look at its specs and features.

The all new, best-of-the-best XR3501 lets you immerse yourself completely in any racing game, with a massive 35” curved display featuring the best color graphics, 2000R ultra curve all-covered field of vision, 2560×1080 resolution, Black eQualizer for total visibility, and the highest refresh rate available today. Watch as the checkered flag twirls and waves announcing your victory, empowering you to feel the thrill of the curve. 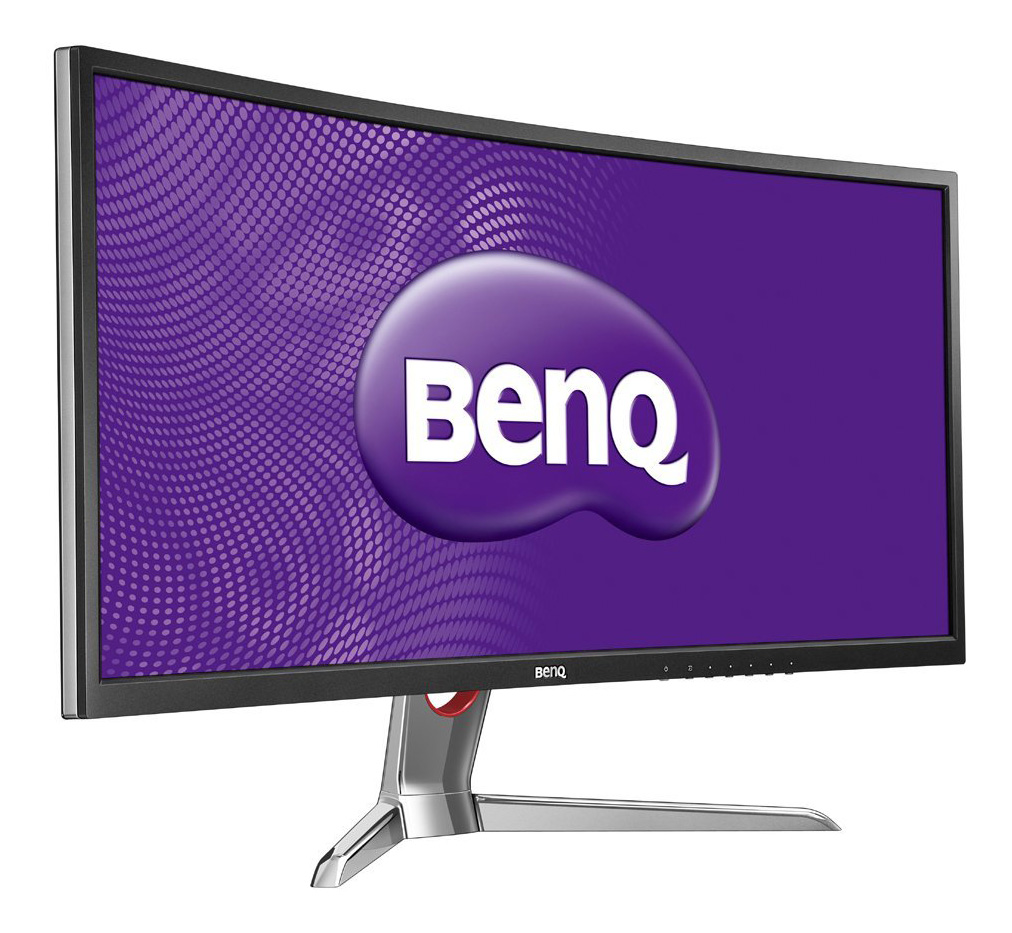 The XR3501’s ultra-wide curved display immediately sets it apart from standard widescreen monitors; dominating a desk and filling your peripheral vision. The overall look is signature BenQ, with a matte black case and a few small red accents.

The monitor is supported by a gleaming metal stand, its feet set wide to provide adequate stability. The design has a fairly minimal footprint given its size, so you can easily fit in whatever knickknacks and doodads litter your desk.

Below the panel, there’s a small BenQ logo and some buttons for operating the OSD. They’re not the touch-sensitive buttons I loved on the BL3201PT, but they’re still relatively easy to use. There are options for various genre-specific modes here, along with other BenQ gaming features like blue light reduction, black eQualizer and 20-level colour vibrance. 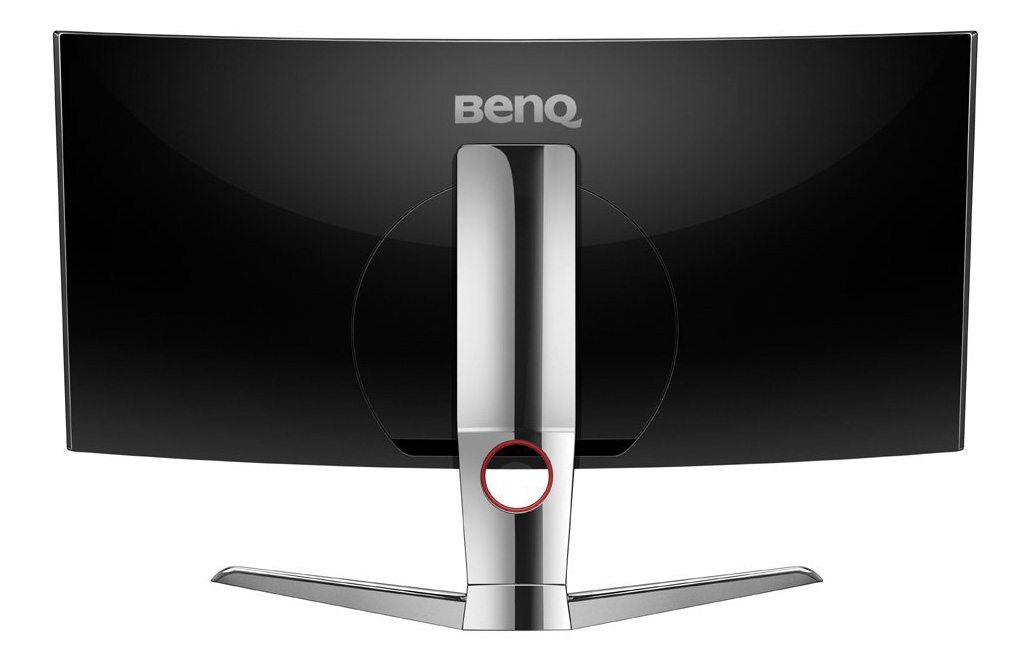 Ports are found on the back, allowing you to connect a pair of HDMI cables, a full-size DisplayPort cable or a mini DisplayPort cable. I went with DisplayPort to ensure the full resolution and refresh rate was maintained; there’s nothing worse than getting a 144Hz monitor and not remembering to set it up for that frame rate!

Sitting in front of the XR3501 is an immersive experience, but try three together and you’re in for an even greater treat. Whichever setup you choose, the ultra-wide resolution suits films as well as most gaming genres. Racing games are the obvious choice (and the target market), but I also had fun in shooters like Counter-Strike: Global Offensive and Fallout 4.

As mentioned above, I used the XR3501 for quite a few months. As well as the usual writing and gaming, I also tried the few films I could find at ultra-wide friendly aspect ratios. So, let’s divide this impressions section into the obvious trio of categories, starting with gaming, then films and ending with day-to-day work in Windows 10. 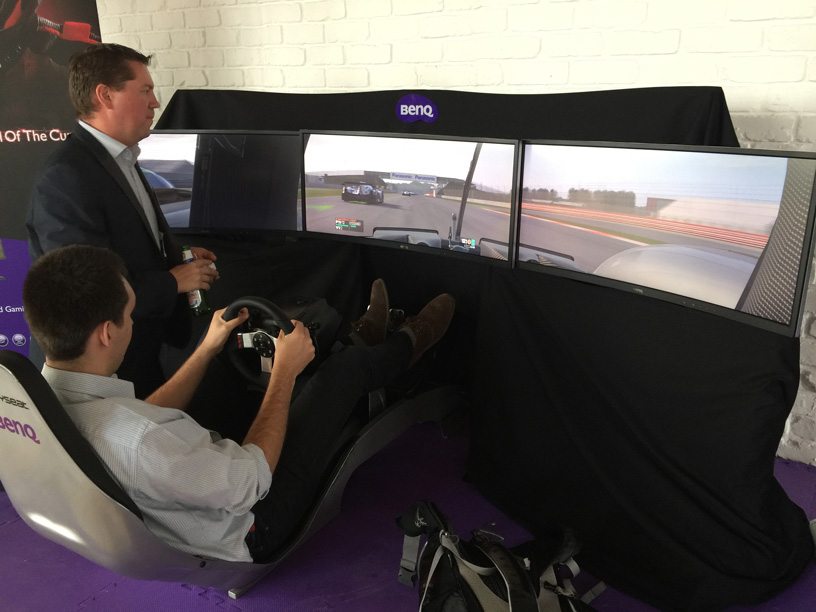 The XR3501 is made for racing games, so that’s exactly what I started with. I booted up Project Cars, and spent many a happy hour working my way through the career mode. The super wide display fills your eyeballs and gives a much better sense of immersion. It also puts some UI elements outside of your immediate attention, so you can concentrate on the apexes and other cars instead of the overall running order or lap times.

The monitor’s resolution is ideal for mid to high-end PCs, allowing for high frame rates (up to the 144Hz refresh rate) without sacrificing too much quality. Similar monitors that operate at higher resolutions (e.g. 3440 x 1440 instead of 2560 x 1080) are a harder target, making a high-end PC a must. The XR3501 is comparatively more forgiving, which is appreciated. 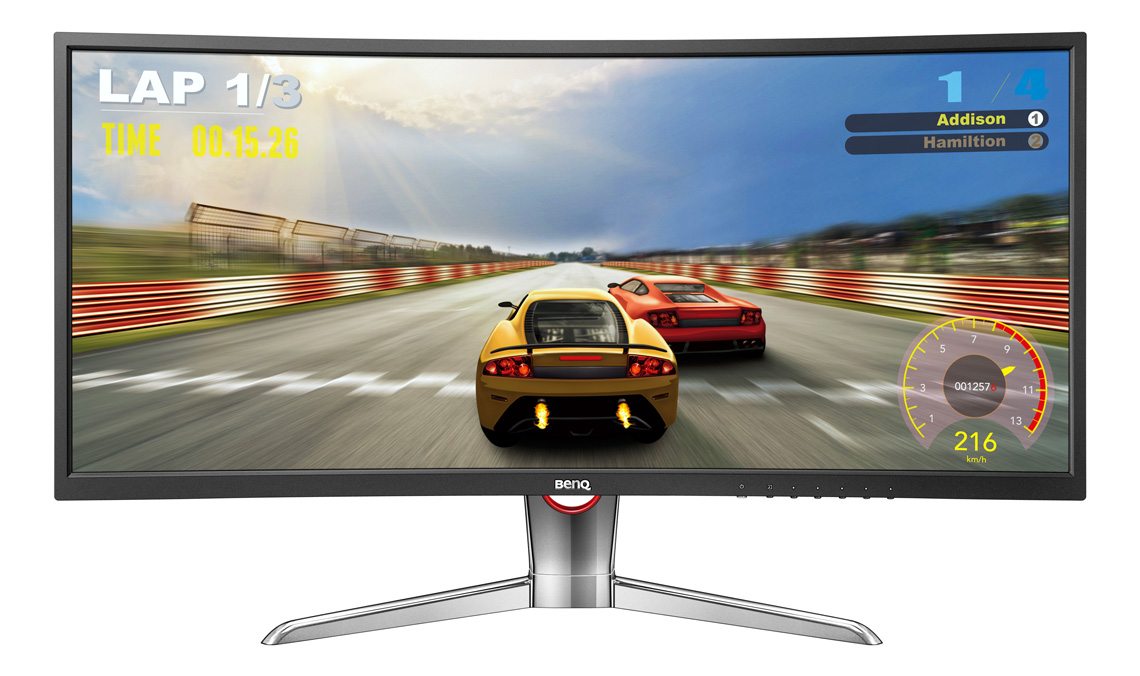 Other games are also quite playable on the XR3501, particularly other games with a first-person viewpoint like shooters. I played a lot of Counter-Strike: Global Offensive on the monitor, and performed well. I appreciated the high refresh rate, although such a wide display does make the player models a little harder to see and decreases performance as more pixels have to be rendered. (That’s why most pros play on 4:3 resolutions, even on 16:9 displays.)

Less competitive shooters also acquit themselves well on the XR3501, particularly scary games set in dark corridors. Playing Stalker or Metro: Last Light was a particularly gripping experience here, although 21:9 resolutions aren’t often supported on older titles. For these, playing in a normal 16:9 mode with black bars on either side is okay, and you can sometimes get 21:9 working by messing around with the configuration files or downloading fan-made patches. And if you don’t mind some extra grief, you could chain together three XR3501s for an insane setup.

Third-person or isometric games are a little strange at first on the XR3501, but ultimately still quite playable. The curvature of the screen is noticeable, but doesn’t detract from your ability to play; it just doesn’t provide quite the same level of immersion as a game with a first person viewpoint.

Overall, the XR3501 delivers on its promise of immersive gaming experiences, and works on more genres than I expected. While other monitors boast higher resolutions or more accurate colours, you can’t beat the feeling of a super wide display.

It’s harder than you might think to find 21:9 films, given the predominance of 16:9 displays as TVs, projectors and monitors. Still, when it is possible, watching a movie on the XR3501 is fantastic. The viewing angles leave a little to be desired, perhaps, but the overall experience is akin to an at-home IMAX when paired with a good set of speakers. Watching 16:9 content is a little weird, as you’re left with black bars left and right, but it’s hardly offensive. 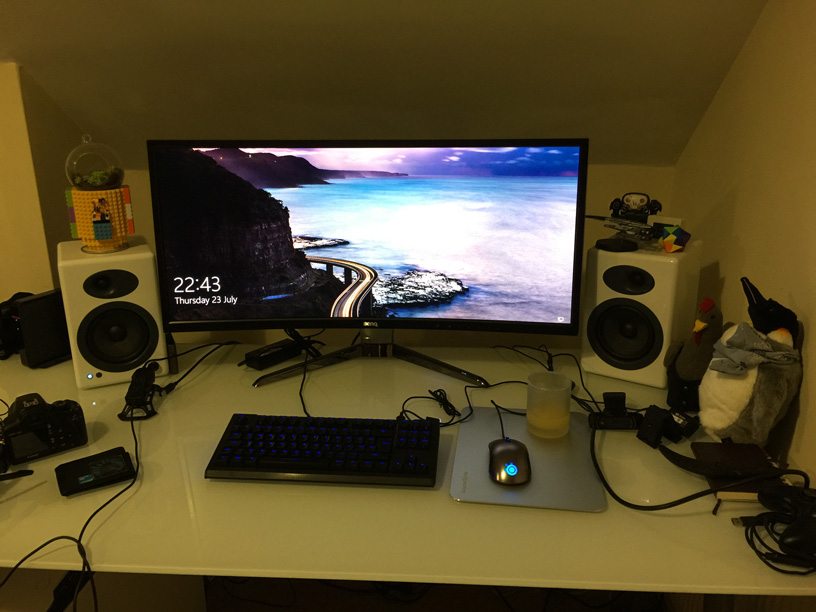 Please excuse the dimly lit iPhone photo above; it’s included to give a sense of scale.

My biggest question about using the XR3501 day to day was “what would spreadsheets look like?” Surprisingly, they don’t look as weird as I was imagining — just a little weird at first, then normal. (Amusingly, switching back to a flat display after hours at the XR3501 made everything look curved, but in the opposite direction — very peculiar!)

Web surfing and Photoshop work also proceeded apace, after that initial period of weirdness. Being able to fit two nearly full-size windows on one display is pretty sweet, and dispenses with some of the aggravation of a multi-monitor setup. If work is your primary goal than an uncurved super-wide display would make more sense, but the XR3501 is still a capable contender.

Another (rare) drawback is that the monitor is kind of massive, and it’s a bit difficult to carry it around (as I found out taking it home, as seen below). That also makes it more difficult to swap it for another monitor on your desk, if you’re the privileged sort to have multiple monitors sitting around. 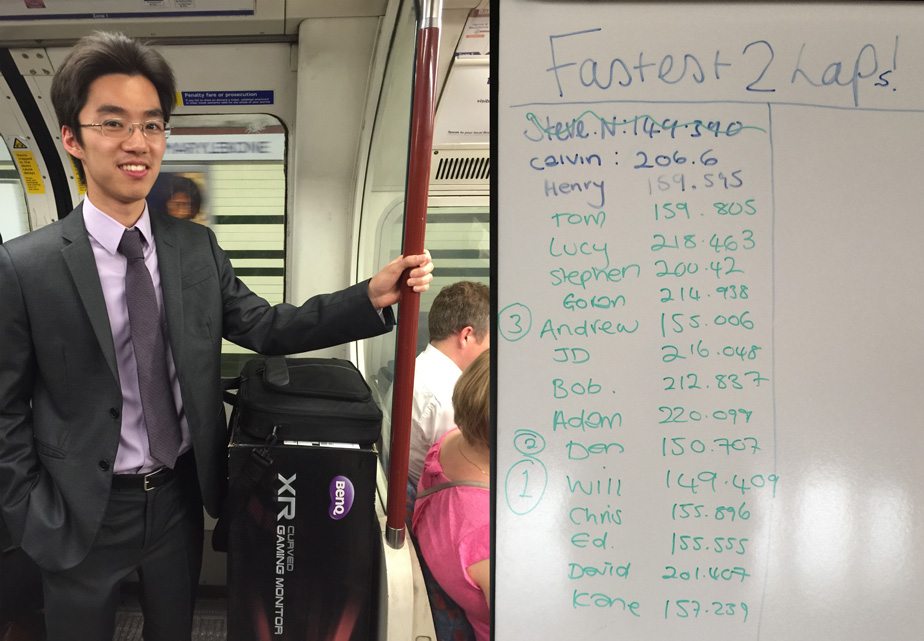 Unfortunately, the XR3501 suffered some damage to its display over the course of our review, so no benchmarks will be performed this time. Thankfully, it remains awesome. 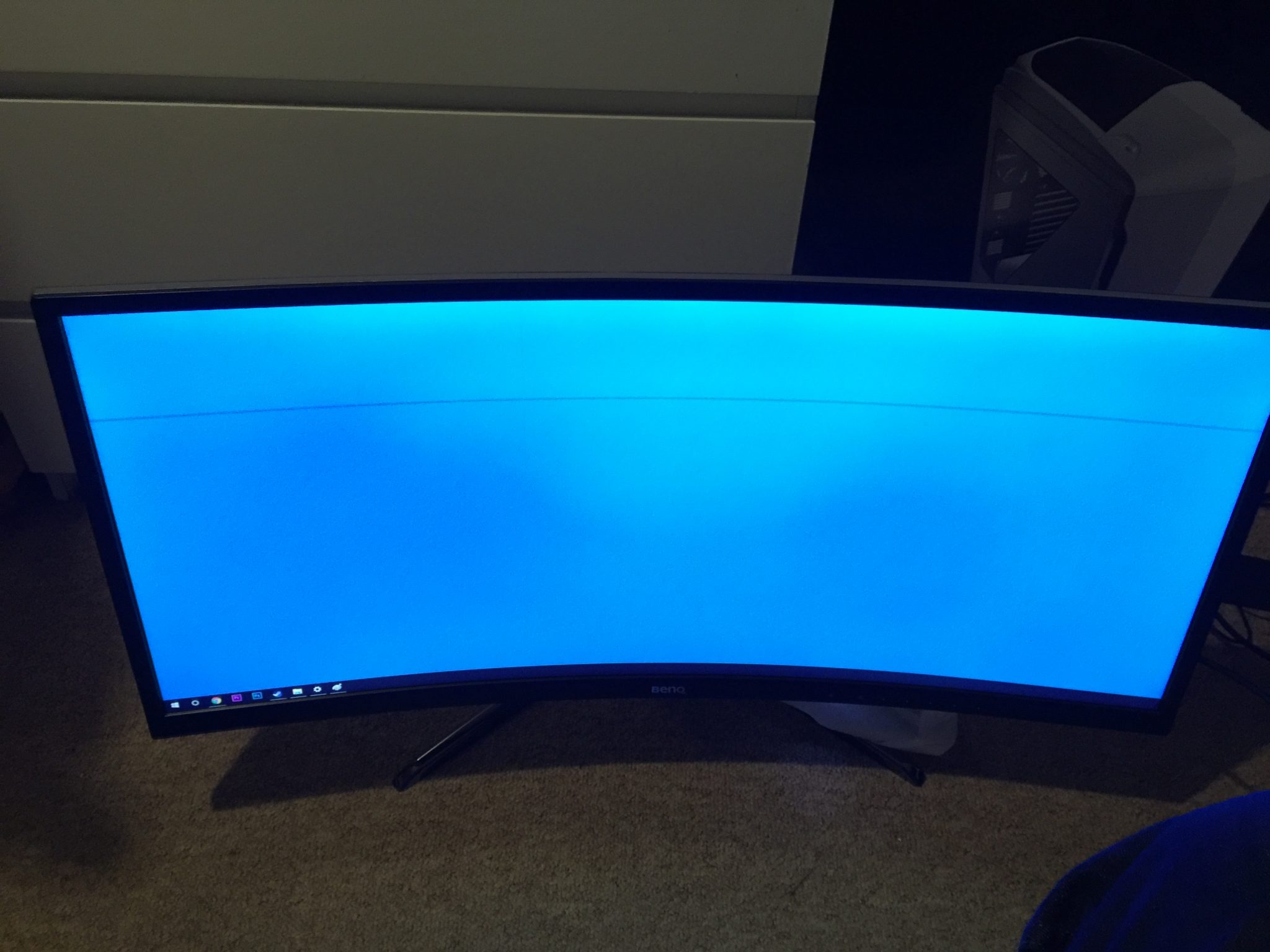 The XR3501 is a brilliant monitor that provides an immersive gaming experience, particularly in racing games, space sims and shooters. The 144Hz refresh rate helps you remain competitive and keeps the action fluid, while a good selection of ports, modes and gaming features differentiate the XR3501 from lesser monitors. While higher-resolution 21:9 monitors can offer a better work or multimedia experience, 2560 x 1080 is a much more approachable performance target for gaming, and ensures even gamers with mid-range PCs have the option to try an ultra-wide display. If you’re looking for a curved gaming monitor, then the XR3501 is a solid choice.

Startech.com are a helpful company to know about — they seem to specialise in simple, helpful doodads...