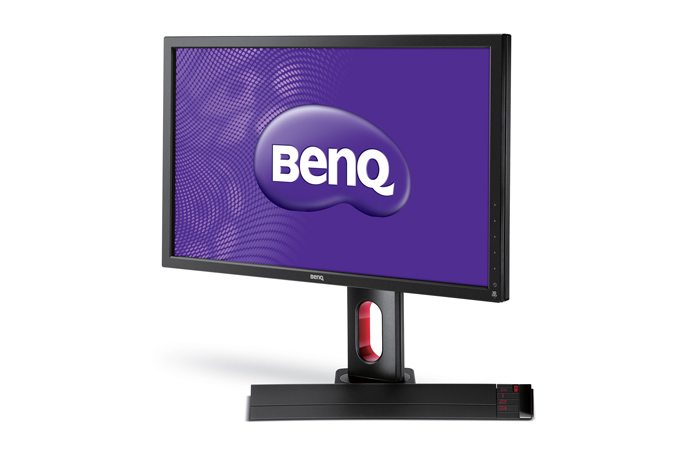 Today we’re looking at the BenQ XL270Z, BenQ’s premier gaming monitor. This model’s unique selling point is its 144 Hz refresh rate, which is much higher than the 60 Hz standard you’ll find on the vast majority of monitors. That translates into a much smoother experience as long as your PC is able to push out that many frames per second.

This 27″ monitor has a 1920×1080 resolution, which is a little less than the Korean imports (e.g. Crossover, Shimian, Catleap) that have become popular over the past few years, but still respectable. The lowered resolution also ensures a higher frame rate than you’d see at 1440p, which of course is essential for utilising that high refresh rate.

I’ve been gaming on a 2560×1440 display at 60 Hz for a couple of years, so I’m interested to see the other side of the spectrum – a lower resolution but a much higher refresh rate. I also have seen this monitor a lot at the ESL studios in Cologne, where it’s used by StarCraft II pro-gamers for their official WCS matches, so that’s interesting as well. Let’s begin.

Built for competitive FPS gameplay, the XL2720Z takes the explosive thrills of fast-paced gaming to a 27″ screen. The stunning monitor is equpped with the latest Motion Blur Reduction technology, Low Blue Light, Gaming-comfort Flicker-free, Gaming Refresh rate Optimisation management, and Display Pilot feature to deliver agile performance, viewing comfort and convenience all at once – for your victory and entertainment.

The XL2720z is an attractive monitor with a subtle gamer-friendly look provided by red accents. The monitor’s bezels are matte black, with a small BenQ logo at the bottom centre. 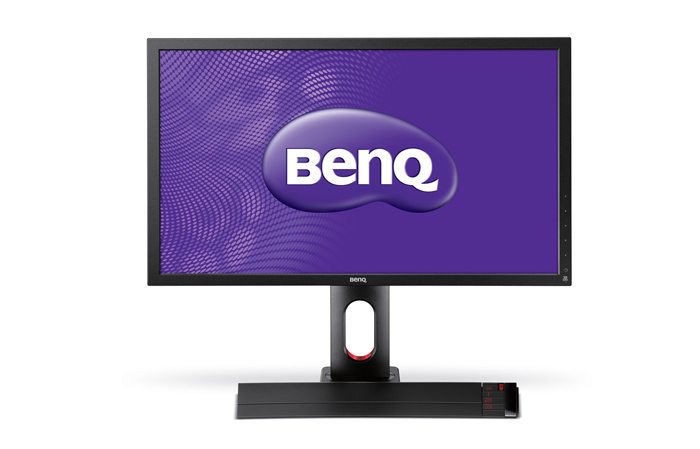 Touch-sensitive buttons are situated on the bottom right, which light up as you hover near them. 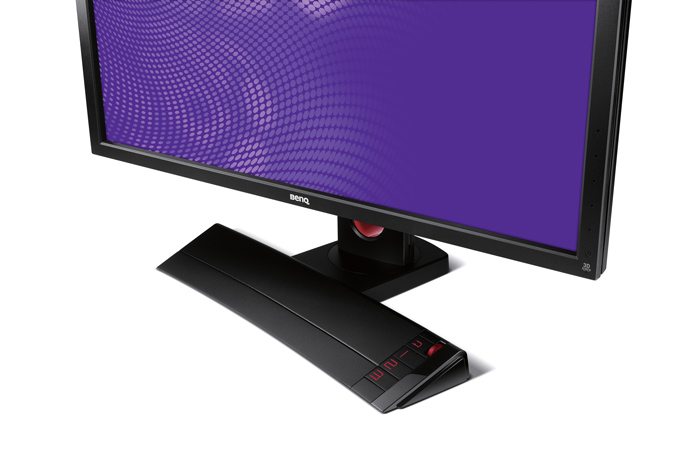 Two USB 2.0 ports and a headphone jack appear on the left hand side of the monitor, while the right-hand side is unadorned. 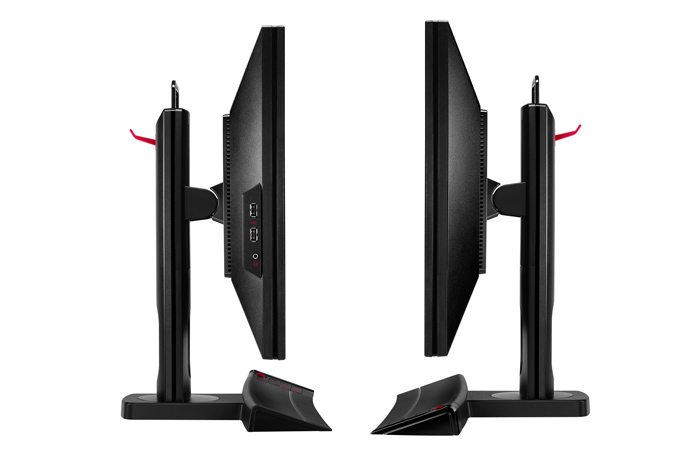 On the rear, you’ll find a range of inputs including HDMI x2, Dual Link DVI, DisplayPort and VGA. There’s also a USB upstream module that connects to your PC to make the side USB ports function. 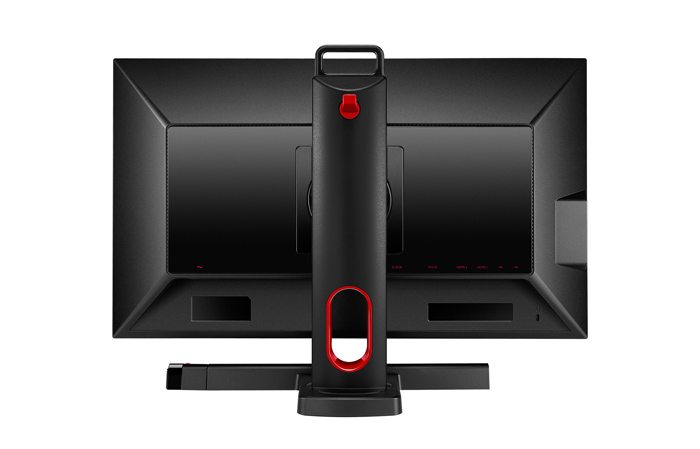 The display is mounted on a convenient stand which remains fixed in place, while the monitor moves up and down in front of it. The stand can rotate 45 degrees left and right, 5 degrees down, 20 degrees up. 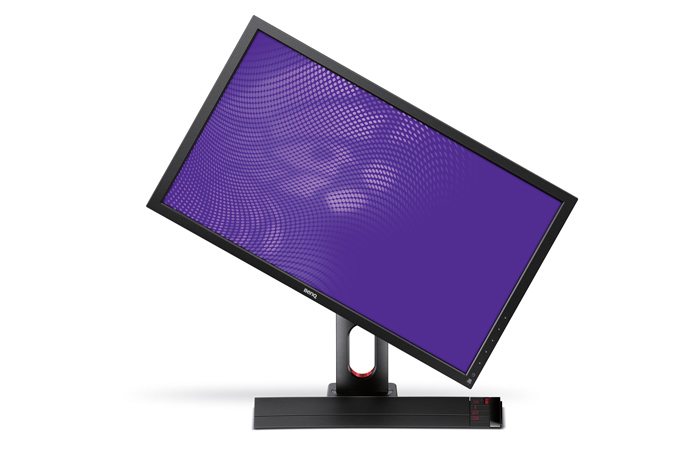 You can also rotate it 90 degrees to use in portrait mode. 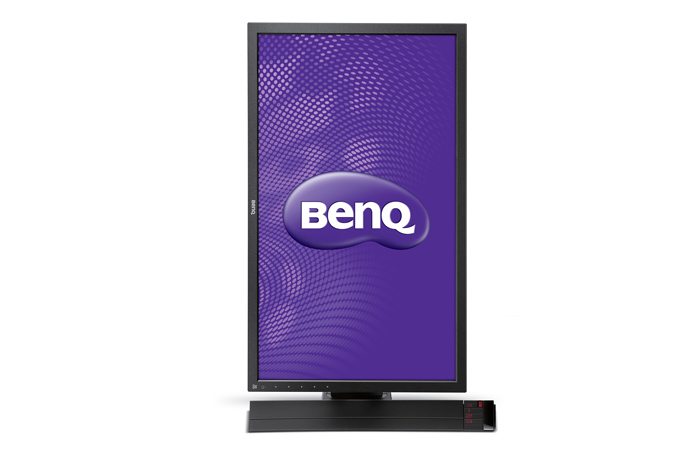 This has a red ring in the centre for cable management. The stand also has a carry handle at the top and a red headphone stand at the back, useful elements for LAN gamers. 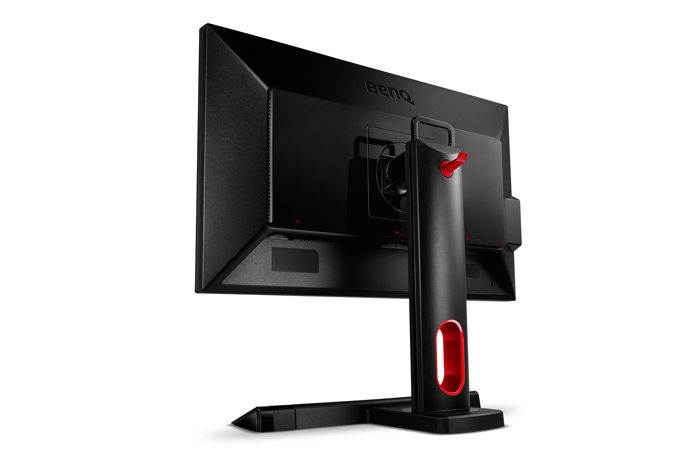 The base of the stand slopes down to reach the desk in a triangular wedge. 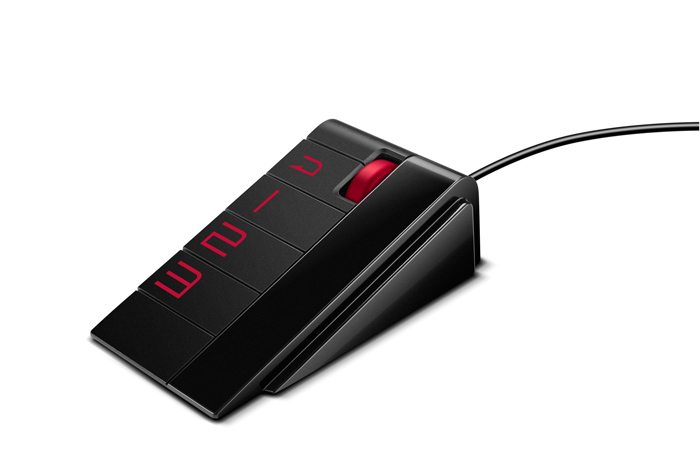 The S Switch control unit magnetically attaches to either side of the base. The unit features a clickable scroll wheel and four buttons, allowing rapid swapping betweel profiles and navigation of the monitor’s On Screen Display.

Our testing methodology for monitors remains unchanged; we’ll use the monitor for a couple of weeks for gaming, graphics and day-to-day work to gain some overall impressions. This’ll be paired with a comprehensive benchmark suite using the Spyder4Elite calibration tool, to show you how the monitor compares to its competitors when it comes to raw numbers. Let’s get into it.

The XL2720Z was designed for gaming, so it’s only natural that we begin our exploration of the monitor’s capabilities there. The high frame rate should be most noticeable in shooters and other twitchy games, but we’ll try the monitor in a range of titles to see how much of a difference it makes there too. The games we tried this time around include Counter-Strike: Global Offensive, StarCraft II, Diablo III, Dark Souls II, Super Hexagon, War Thunder and Battlefield Hardline.

This monitor was designed with Counter-Strike pro-gamers, so loading up Global Offensive seemed the obvious choice. We had to adjust a few settings to get the frame-rate stable and into the high triple digits, but after that it was smooth sailing. The extra fluidity of the display did seem to help a bit when it came to putting down the CT side with some well-placed rounds from the AK-47. We were also interested to see the effect of the FPS mode, but this turned out to be just a gamma adjustment, which wasn’t particularly helpful in the game. The Black eQualizer was quality though, providing more contrast on darker areas and making it easier to spot hidden opponents.

Other titles seemed to benefit from the higher visible frame rate as well. Battlefield Hardline and Call of Duty: Black Ops II both looked fantastic on the monitor, although the former required some tuning to attain sufficiently high frame rates on our test rig. You’ll definitely see more an advantage in twitchier, faster-paced games, so if FPS is your bag then the XL2720Z seems well-suited to the task.

Of course, gaming (and pro-gaming) isn’t limited to twitchy shooters. We played a lot of Diablo III and StarCraft II using these monitors, and ultimately the difference wasn’t too great. While some movements did seem a bit more fluid, the difference was much less obvious than in other titles. Ultimately, we’d say that a higher resolution makes a bigger difference to the visuals than the higher frame rate – so a 1440p monitor may be a better use of your funds than a 144 Hz one.

Super Hexagon was an interesting case. We thought that the rapid pace of the game would make it a natural fit for the higher frame rates allowed by the monitor, but with v-sync on or off the game ran at 60 frames per second, nullifying the monitor’s advantage. If you’re looking for a high refresh rate monitor, then make sure the games you want to play can indeed be played at 120 or 144 Hz!

Outside of games, the XL2720Z is a less riveting choice. The TN panel used here is essential for high refresh rates and low response times, but in turn it limits viewing angles and colour accuracy.

Sitting dead-centre in front of this monitor is quite important, making for a good picture for you but a mediocre one for anyone else, with washed out colours galore.

The low colour gamut of the display also makes this a difficult monitor to use for graphics work; a few times I tried creating images on the XL2720Z only to move them over to my calibrated Crossover and find I’d used completely different colours to what I was expecting.

The 1080p resolution also looks distinctly subpar sitting next to a 1440p monitor of the same size. This isn’t as noticeable in games, but is painfully obvious when reading or writing text, or just using the desktop.

Ultimately though, I can’t fault the monitor too much for these issues; they are reasonable trade-offs for the gaming-focused features that the monitor was designed around. Just be aware that you’ll be sacrificing resolution, viewing angles and colour gamut for that high refresh rate, and that does make a difference to how you use this monitor outside of games.

As this is a TN panel in a gaming monitor, we’re expecting to see different results to our last BenQ monitor, the professional BL2710PT, which used an IPS panel at 1440p. Let’s get started. 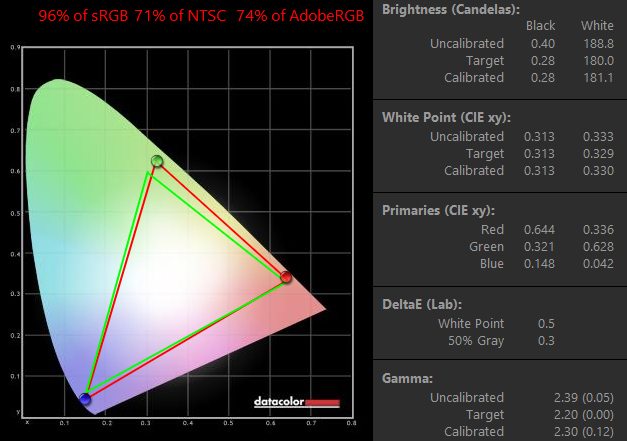 As we can see, we almost hit all of sRGB, with a 96% rating. NTSC and AdobeRGB are also at reasonable values; 71% and 74% respectively. This means that this isn’t an ideal display for colour sensitive work, but it’s better than many low-end monitors too.

Our next measurements are that of brightness, contrast and white point. The contrast ranges from 630:1 at low backlight settings to 750:1 on higher backlight settings. The monitor boasts more range on either end of the scale than the BL2710PT.

You can also see how those measurements differ on various settings; ‘standard’ and ‘sRGB’ provide the highest contrast ratios, and white points vary considerably too. 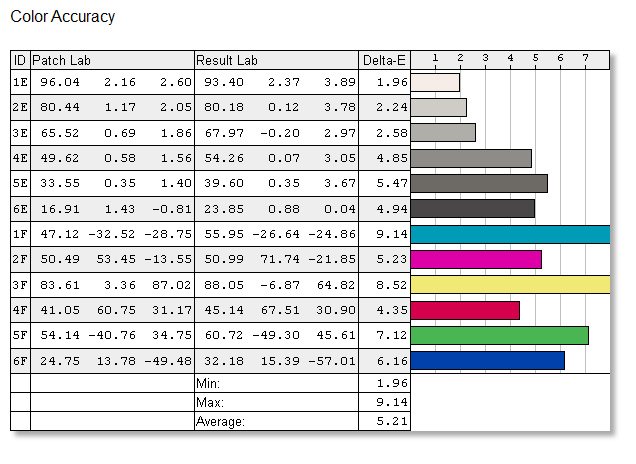 Colour Accuracy is next on the list, and as expected this is where the monitor shows a bit of weakness. The Delta-E values are disappointingly over the usual 3.0 standard for the three darker grays, turquoise, pink, yellow, red, green and blue. On average, the monitor gets a failing grade of 5.21, a far cry from the 2.72 of the BL2710PT. This is a gaming monitor so it’s not the biggest deal, but it’s worth keeping in mind that many colours will look a bit weird on this monitor. 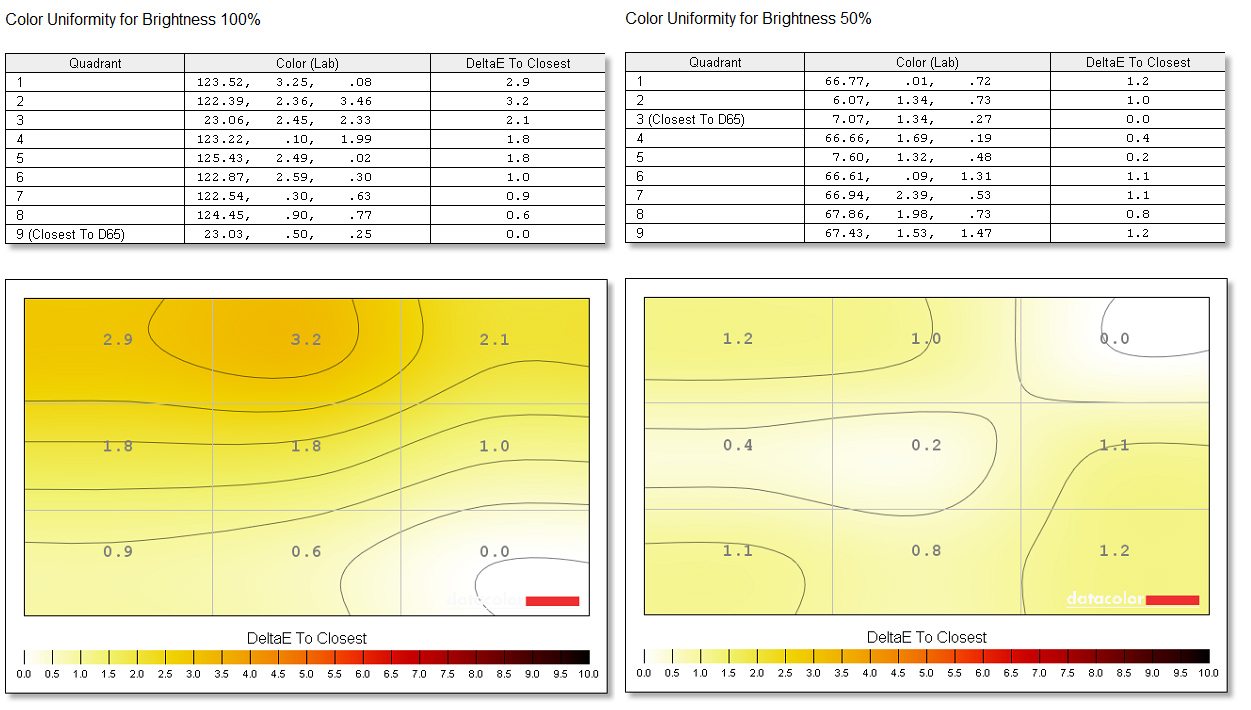 Colour uniformity comes next. Here we can see fairly good results, with Delta-E values below 3 almost everywhere. Indeed, the only real issue is in the upper left and upper centre quadrants; everywhere else is fine at 100% brightness. These issues are hidden completely at lower brightnesses; at 50% you’ll see average Delta-E values of less than 1. 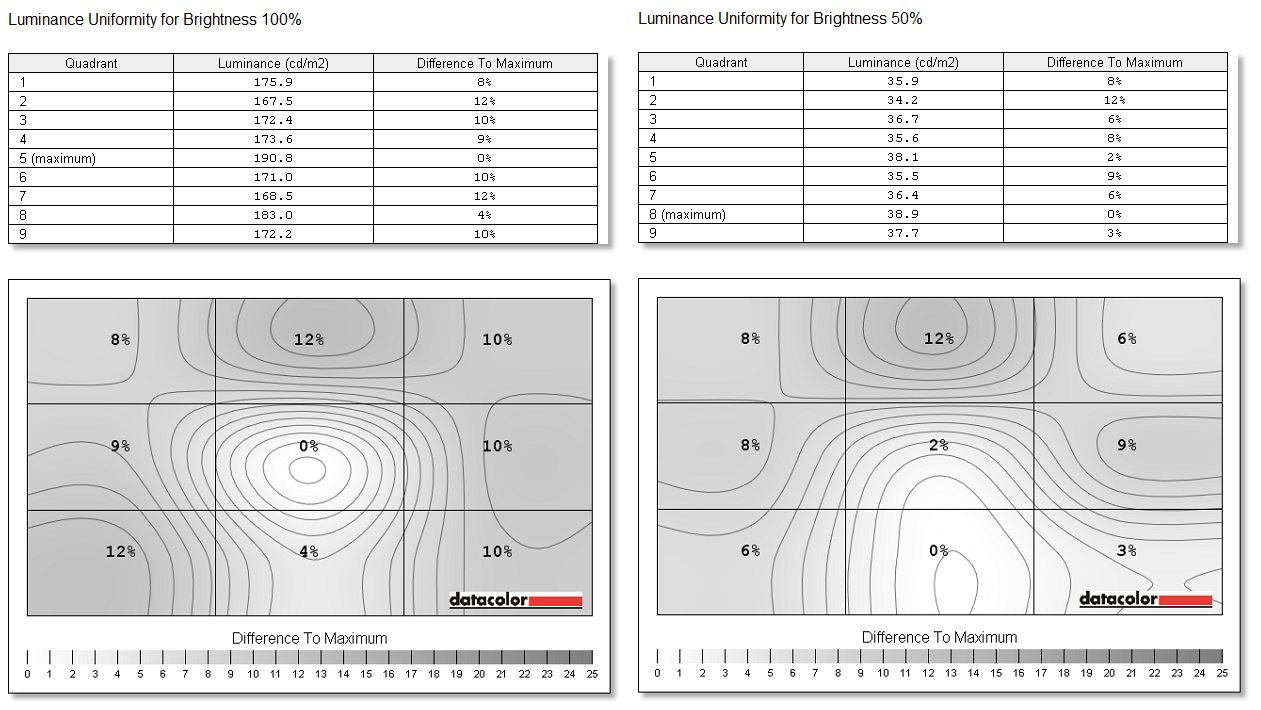 Luminance uniformity was also very good, with values not exceeding 12%. This is better than the BL2710PT, which saw values of around 15-17% in many quadrants. The upper centre quadrant was again the worst offender, but overall the results were pretty decent. 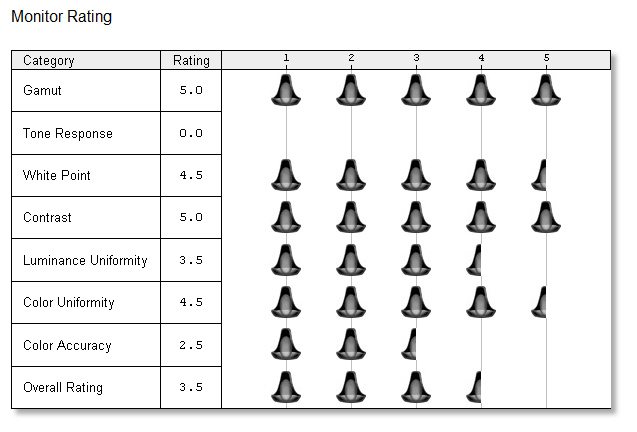 We conclude with the Spyder4Elite’s monitor rating, which is an OK summary of what we’ve seen: decent gamut, good contrast, decent luminance and colour uniformity, poor colour accuracy, and a middling to good overall rating.

There are two conflicting strategies to selecting an excellent monitor: maximising display quality (resolution, viewing angles, colours) or maximising display speed (refresh rate, response time). As the BenQ BL2710PT is the epitome of the former, the BenQ XL2720Z is a realisation of the latter. The 144Hz refresh rate, 1ms response time and its range of display settings make for a compelling gaming experience. If you’re looking for an edge against your opponents, then the XL2720Z is a great choice.

Nomad is one of the latest companies to be formed off the back of a successful Kickstarter project. They...

Today we’re reviewing something rather different than our normal range of gaming laptops: the Acer...