The W1050 is a popular budget digital projector, pumping out a 1080p projection that can measure 100″ at a distance of three metres for just £440. Is this the best budget projector for less than £500? Let’s find out! 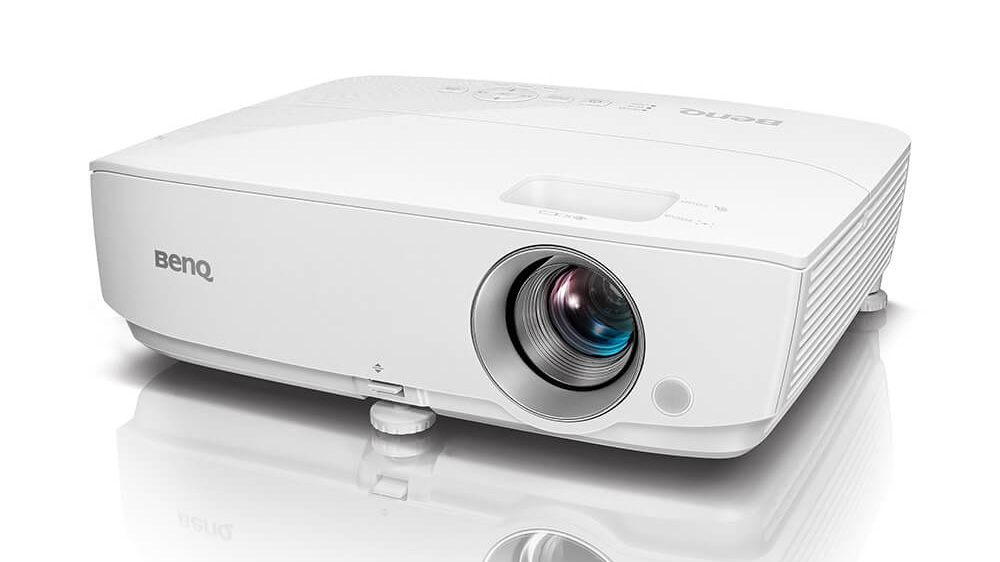 The BenQ W1050 looks much like its counterparts, a matte white contraption about the size and weight of a shoebox, if the shoebox was being used to transport illicit lead figurines. The silver-ringed lens on the front right of the projector is balanced by a BenQ logo on the front left, with a small extendable foot in the bottom centre and two more at the back of the projector. 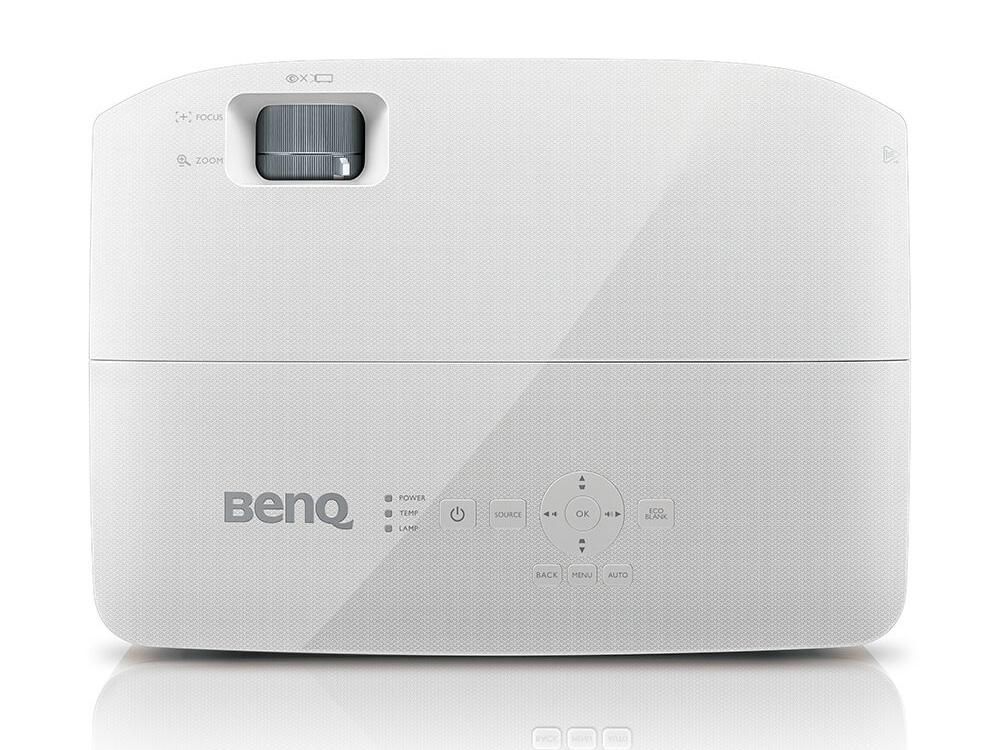 Moving to the top, we have two wheels for adjusting focus and magnification, plus a grid of rounded rectangular buttons. Here you can adjust the settings, change inputs and so on, if you don’t have the included remote on hand.

The left and right sides are used only for ventilation, ensuring that blocking one side doesn’t cause massive thermal issues. The bottom is also replete with air vents; projectors produce a ton of heat. 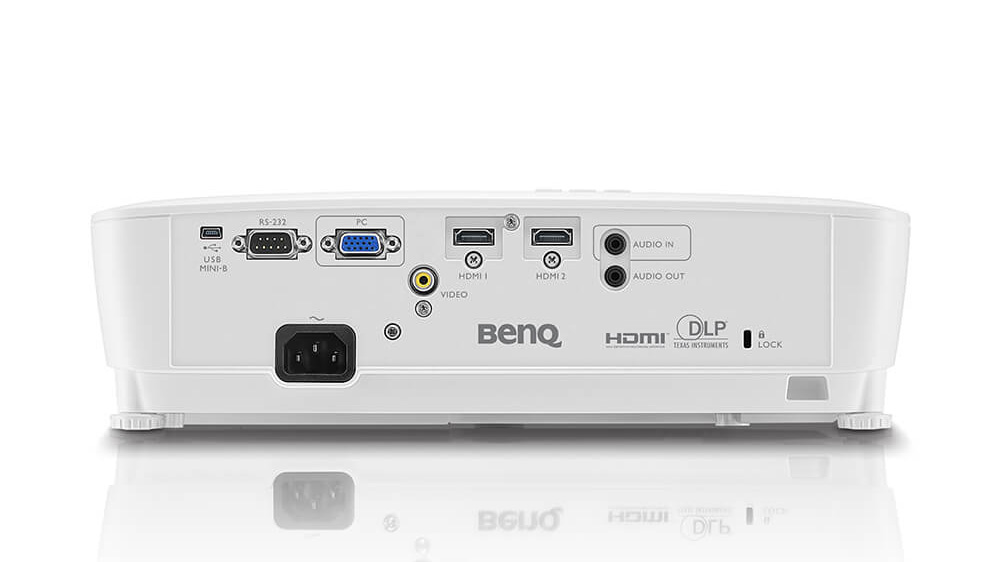 Finally, on the rear we have two HDMI ports, S-Video and VGA for older devices, a serial port, USB Mini B and 3.5mm in and out. A power input is also included, of course. However, there’s no full-size USB port and hence no facility to play back media files on a USB drive directly from the projector or power a dongle like a Chromecast. MHL functionality is also sadly unsupported.

We used the W1050 for a one month testing period.

For our setup, we were able to produce a 1.70 metre (67″) screen at a distance of 2.1 metres (83″), making for a throw ratio of 1.23. That’s a little worse than the BenQ W1210ST we tested earlier, which were able to produce 100-inch projections at a similar distance — but that projector is twice the price of the W1050 at around £900. The actual setup process was very fast, requiring only a few adjustments to the feet to get a level image and a few clicks using the vertical keystone correction to get a perfectly rectangular image. 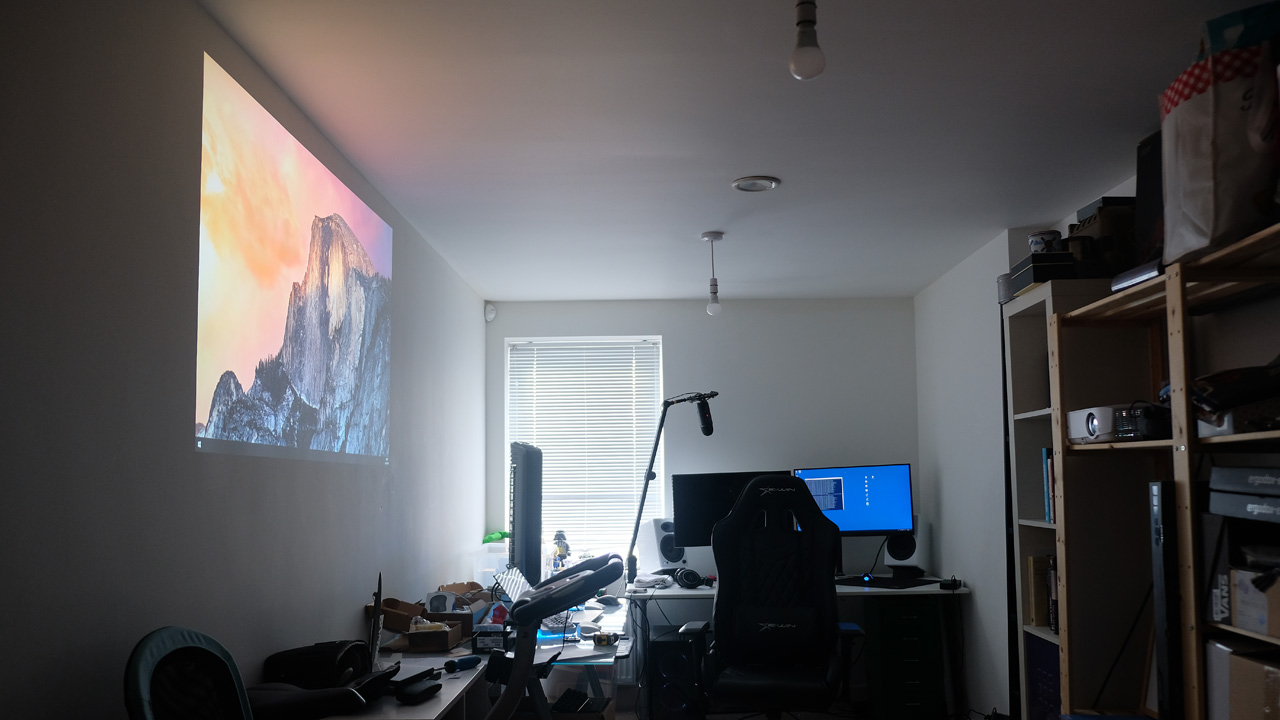 In general, we found that the projector was best suited for PC and console gaming, thanks to its relatively low input lag of around 30ms. Although most PC monitors at a similar price point are able to offer higher resolutions, higher refresh rates or both, sometimes it’s just nice to have a super big canvas for the action. Games that work well on consoles work well here too; casual shooters, racing games, platformers, fighting games and so on.

We had a great time playing Forza Horizon 7 on both the Xbox One and PC, with the large screen size and detailed projection making it easier to spot upcoming corners as we hooned around Spa-Francorchamps. While the projector doesn’t support HDR reproduction (and you wouldn’t expect it to at this price point), its 96% coverage of the Rec. 709 gamut is backed up by quite faithful colour reproduction in the movies, television shows and games we tested it in. Contrast is also reasonable, with dark scenes in shows like Better Call Saul remaining quite watchable.

The 2200 lumens of brightness from the Normal mode proved more than sufficient for our purposes, with the image being quite visible even on bright and sunny days. However, these same fair-weather days also dumped a lot of heat into our A/V room… and combined with not inconsiderable thermal output of the projector, this made for a toasty working environment. The W1050 doesn’t seem particularly bad in this regard, but it’s definitely something to keep in mind if you’re going to be operating the projector in a small space that perhaps lacks adequate ventilation. 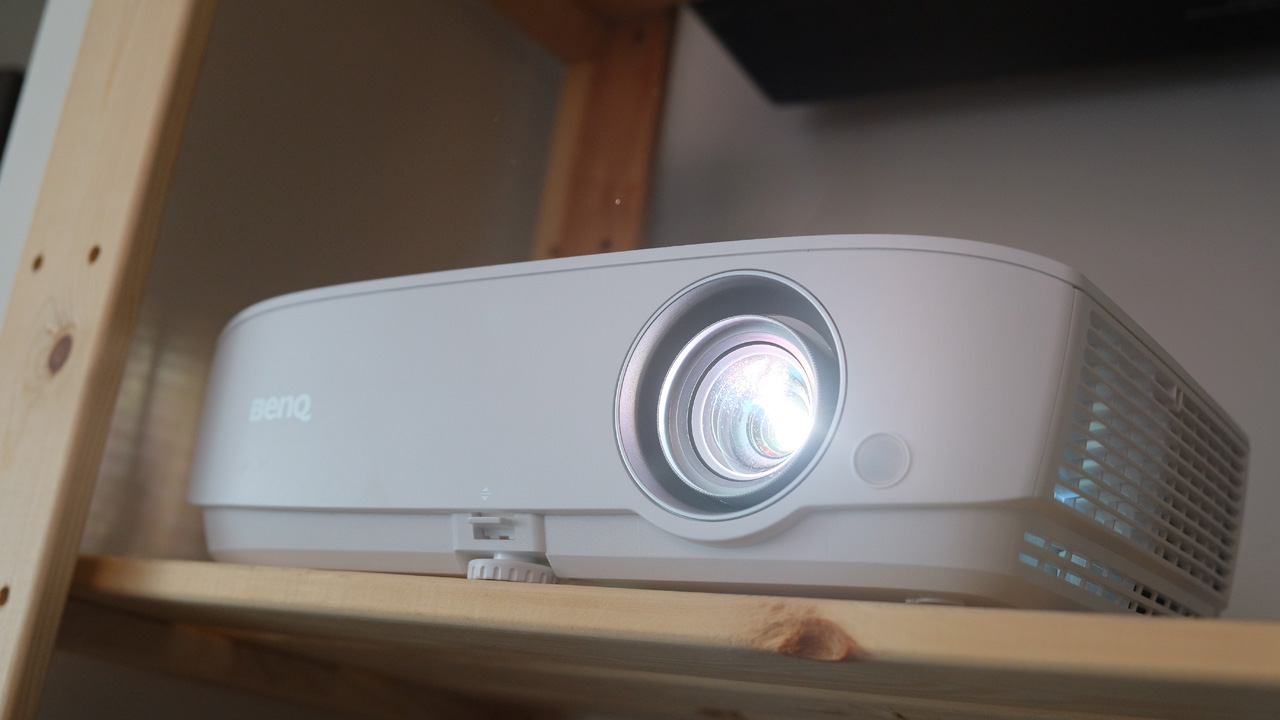 Noise is also something on an issue with the W1050. The projector produces around 30 dB of noise while turned onto its eco setting, and it becomes a few decibels louder when eco mode is switched off. That’s louder than most well-built gaming PCs, but the relatively deep tones aren’t too annoying. However, they do make it difficult to make out dialogue on the integrated 2W speakers; we recommend hooking up to an external audio source like a set of bookshelf speakers, soundbar or a proper surround sound setup if you’ll be using the projector for any extended period.

Unfortunately, we aren’t able to offer any critique of the (apparently included) remote, as our unit didn’t come with one. Our unit also didn’t include a lens cover or a bag, both of which are definitely nice to have whenever you’re moving the projector around to prevent damage.

The BenQ W1050 is a solid budget projector that manages to avoid a lot of the common low-end pitfalls. It produces a crisp, low-lag image with an acceptable throw ratio and without any issues with colour, brightness or contrast. However, it does also lack several features, such as automatic keystoning, USB or MHL support or a lens cover or case for transport. It’s also a little louder than we would have liked, although this won’t be a dealbreaker if you’re using anything but the integrated 2W speakers.

However, the W1050 is far from the only projector at this price point. On Amazon, its two closest competitors are the Epson WH-TW650 and the Optoma HD142X.

The Epson model offers a brighter picture, at 3100 lumens compared to 2200 on the W1050, with the same contrast ratio and HDMI count (2). However, its colours don’t hit the 96% of the Rec. 709 gamut as the BenQ projector. The Optoma projector is also brighter, at 3000 lumens, and does support Rec. 709, but seems to suffer from poorer image quality. I’d suggest checking out the Epson or Optoma projectors if you’ll often be using the projector in bright conditions, but the BenQ W1050 should best both in semi-dark or dark conditions.

Given the state of the competition, I’m happy to name the BenQ W1050 as the best budget projector for less than £500.

What do you think? Let me know in the comments below.