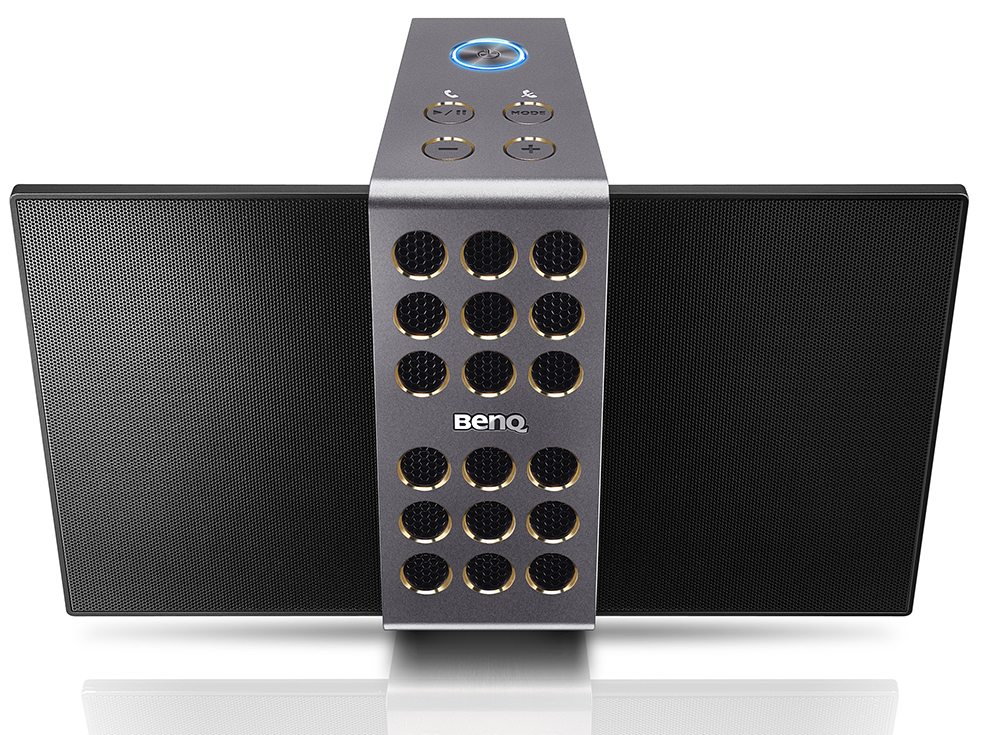 The BenQ treVolo is a high-end Bluetooth speaker, with a funky folding design that’s hinted at in its maker’s creative capitalisation. BenQ boast that it’s the first portable unit to use the same electrostatic panels as high-end living room speakers, providing the opportunity to reach “new heights of audio satisfaction” for only £230. The electrostatic panels have certainly influenced the avian look of the treVolo, but will it make for a radically better sound as well? Let’s find out! 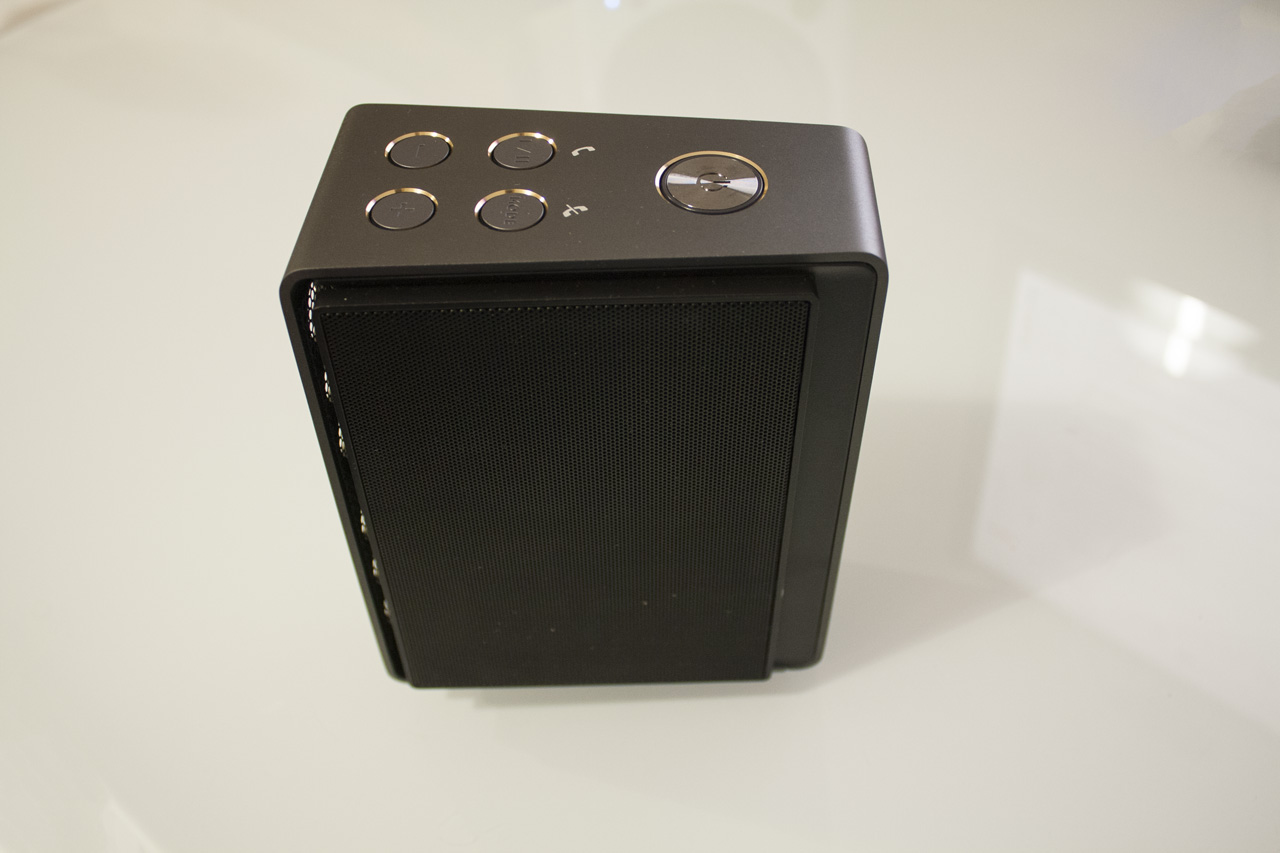 In lieu of the usual unpacking section, let me simply say that the treVolo was well packed, and comes with an AC adapter and the usual literature.

Out of the box, the treVolo is an immediately handsome creation. About the same height and depth of a typical paperback (and perhaps four times the width), the unit feels dense and durable in the hand. 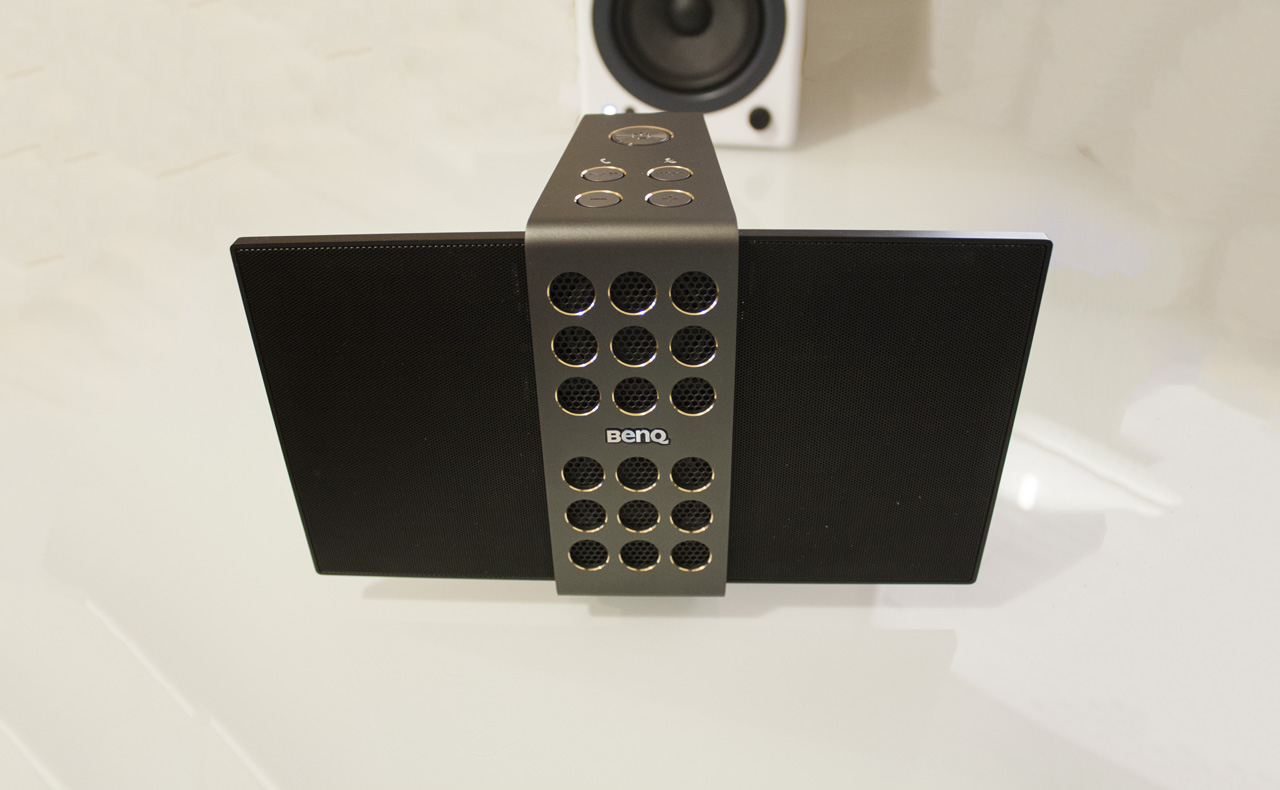 The electrostatic panels so vaunted by BenQ are mounted on swinging arms, extending easily to rest at a right angle to the base. The design of the panel “enables sound to be projected in front and behind the speaker”, in contrast to most speakers which project sound in a single direction. That’s a useful ability for filling a room with sound.

The treVolo is ringed by a vertical band of metal, with eighteen gold-ringed cutouts on the front allowing air to pass from the twin 2.5-inch woofers. 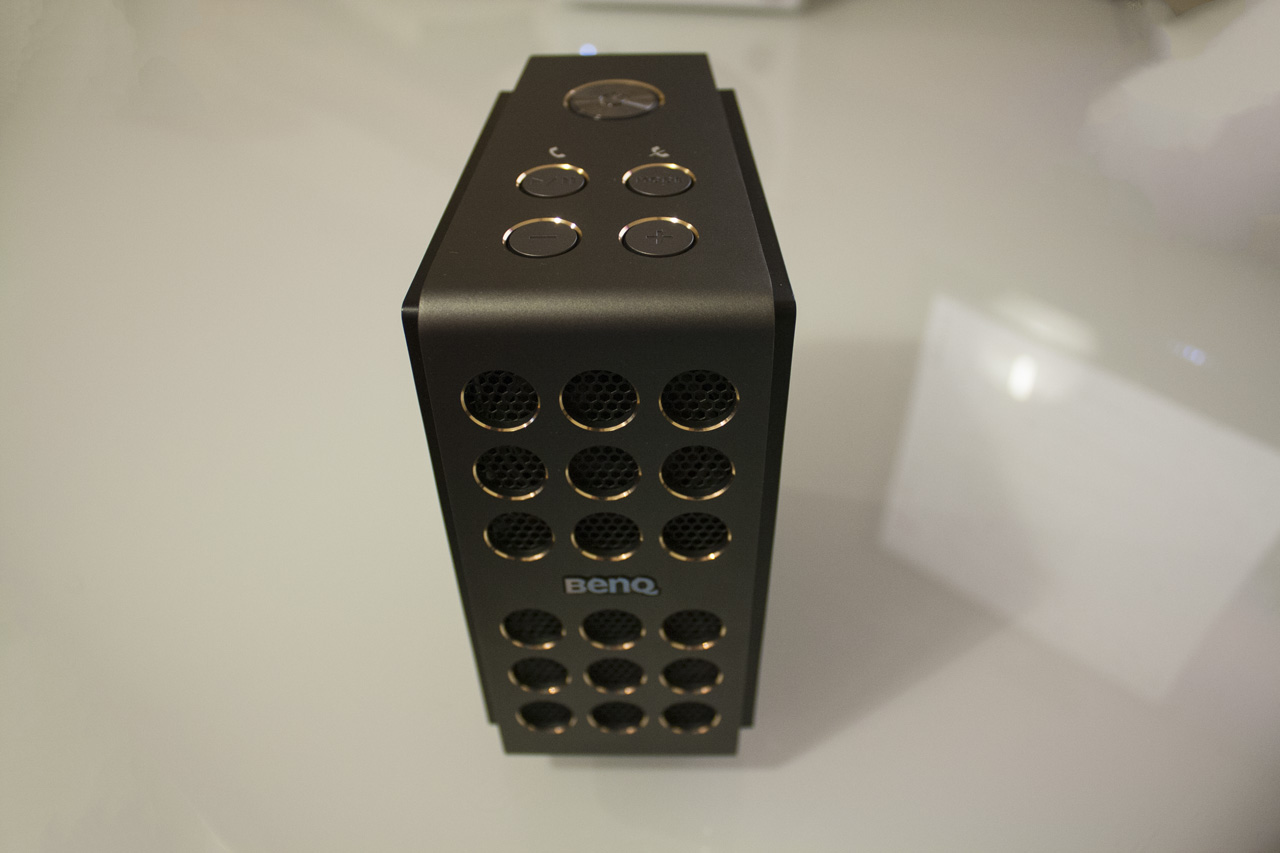 On top, we have five similarly gold-ringed buttons, which are nice and clicky under the fingers. Four are for adjusting the volume, playing or pausing and adjusting the mode between the three options available. The different modes are reflected in the LED that surrounds the large power button: 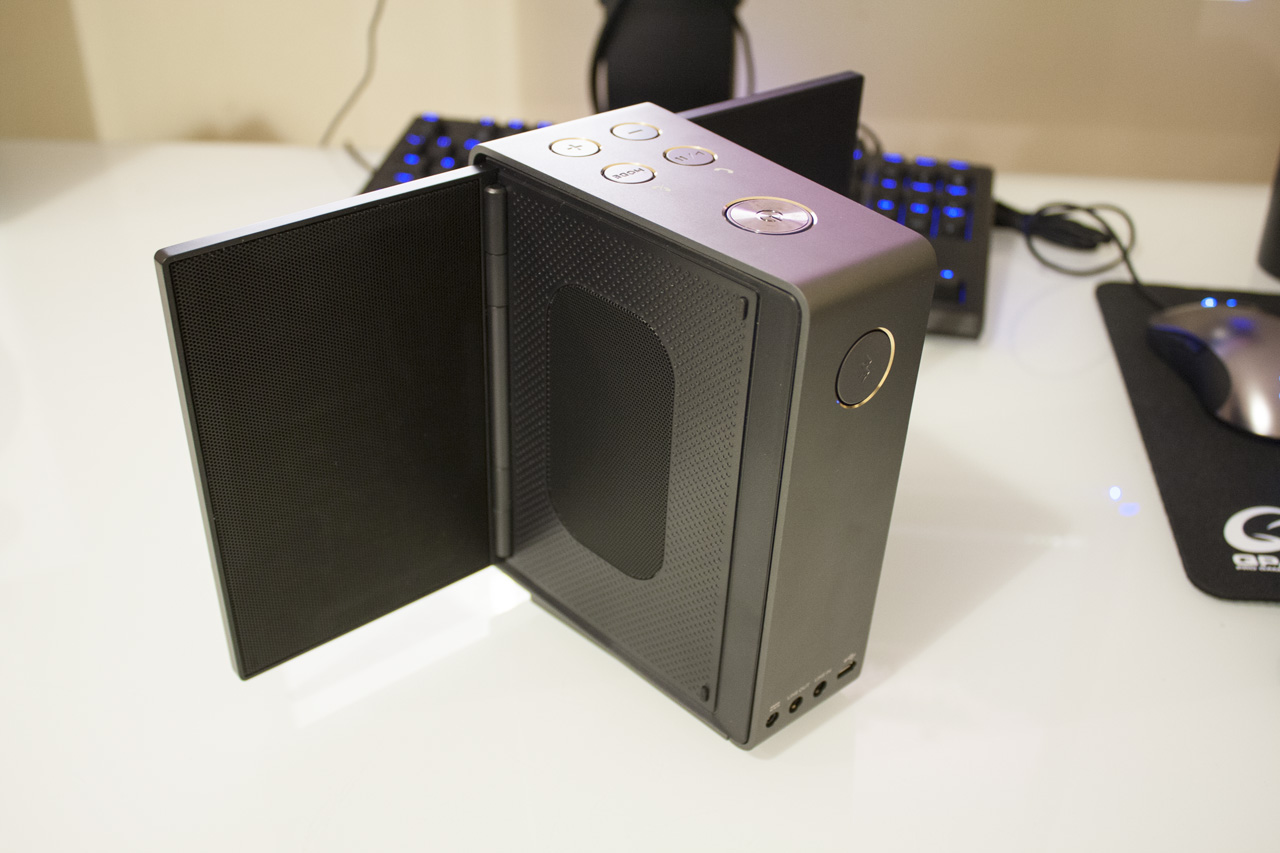 On the back, we have a Bluetooth pairing button at the top… 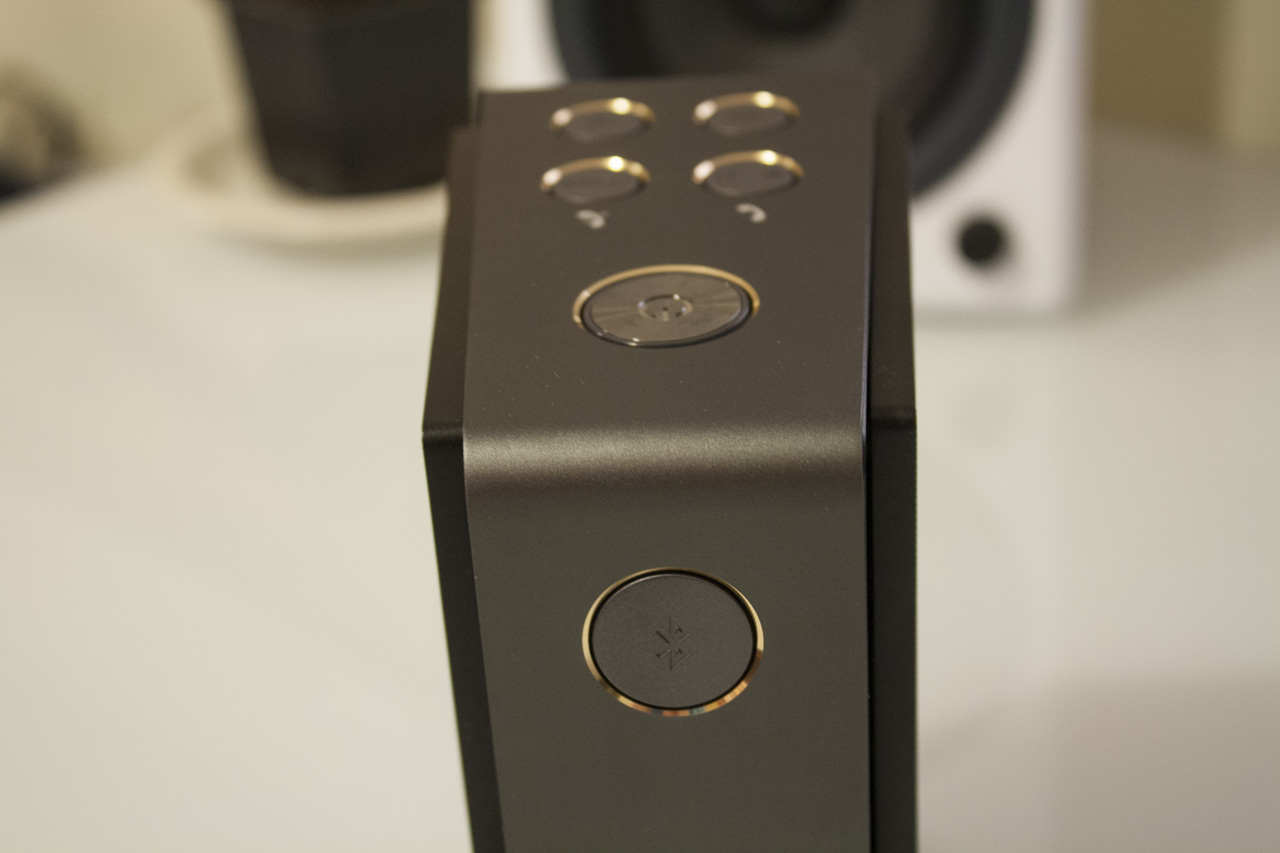 …and four inputs at the bottom. These are, from left to right: AC in, line out, line in, micro USB. 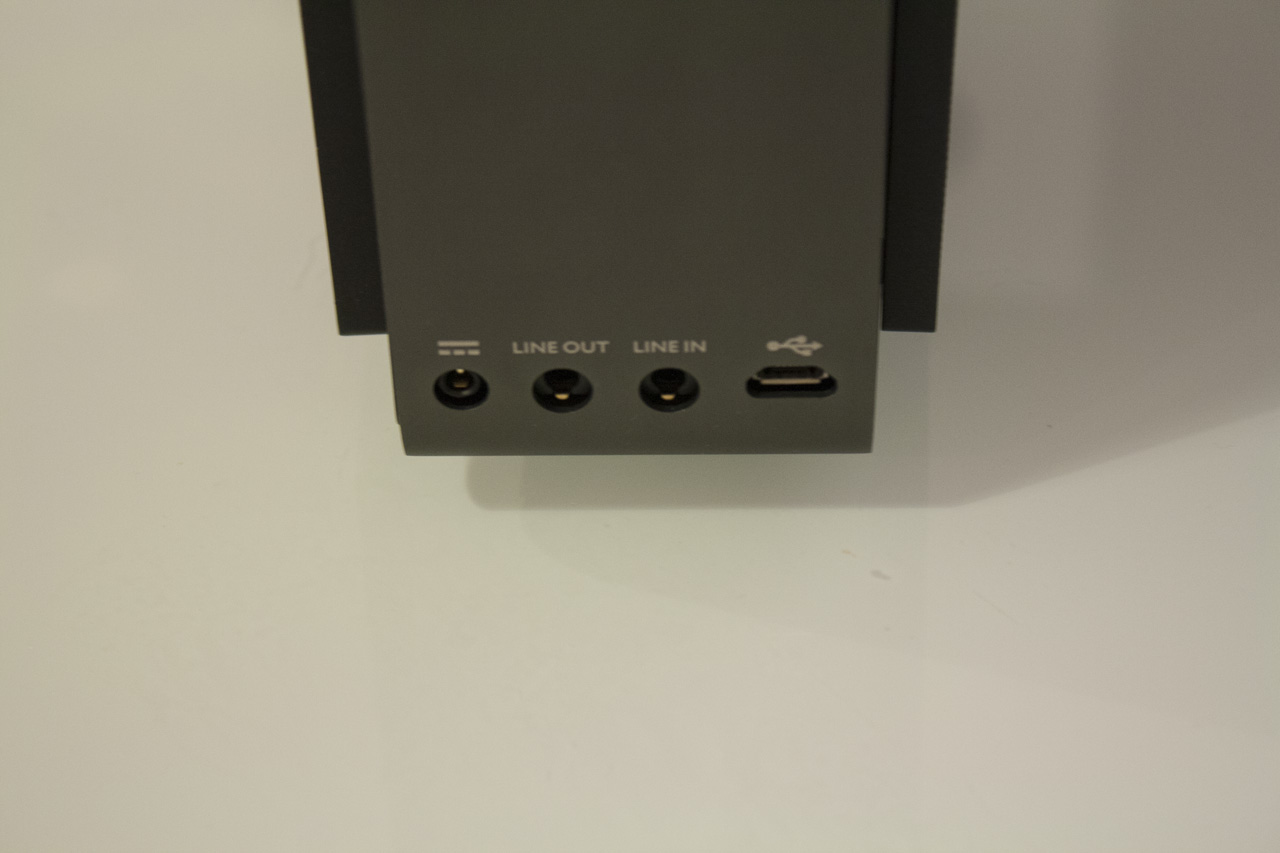 The base is rubberised for grip, and also contains the obligatory regulatory information. 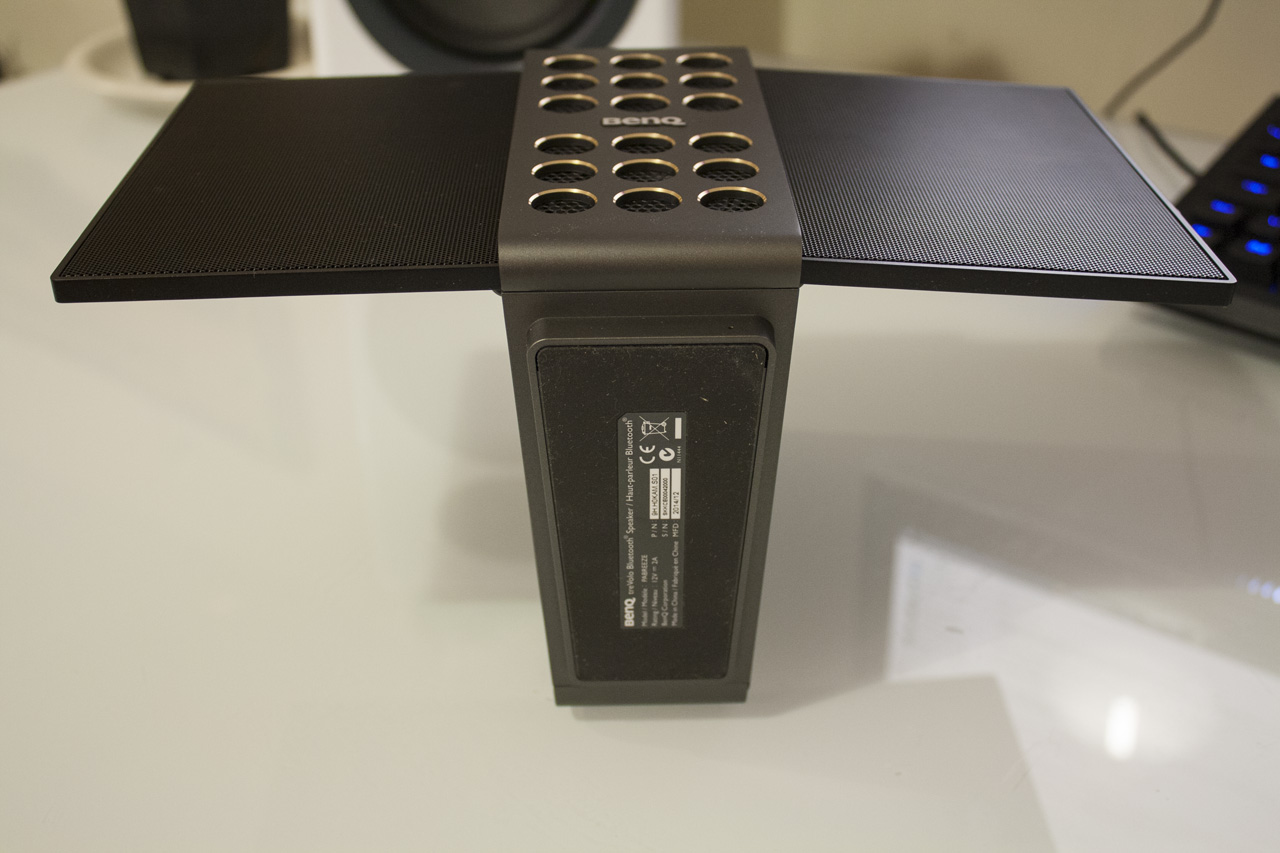 So that’s the design; quite befitting a speaker of this price point, I think.

We tested the treVolo speakers on a range of music, played through a PC using the USB connection to ensure the highest-possible quality. An assortment of tracks were played, both local FLAC songs and 320kb/s MP3s streamed from Google Music. Additionally, we tested Bluetooth aptX streaming using the Tidal music app on a OnePlus One Android phone. Finally, we tried Skype audio calls using the treVolo as a handsfree unit, again with the OnePlus One.

The treVolo was set to green (flat) mode for the duration, placed at ear-height, and we adopted expressions of contentment, as seen below:

With our faces and music thus prepared, we began the testing listening to Vivaldi’s Music For Lute and Mandolin. It’s an album very familiar to me, and was well-reproduced on the treVolo. Each instrument was distinct and clear, with a pleasing accuracy to the sound compared to playback on much larger (and similarly flat) speakers. Both mids and highs sounded great here.

Next, we moved onto DNA’s simple remix of the Suzanne Vega song Tom’s Diner (which itself was famously used to develop the MP3 compression algorithm in the 1980s). The vocals of the song come through clearly, although the drum beat feels a bit timid compared to other Bluetooth speakers of similar size. 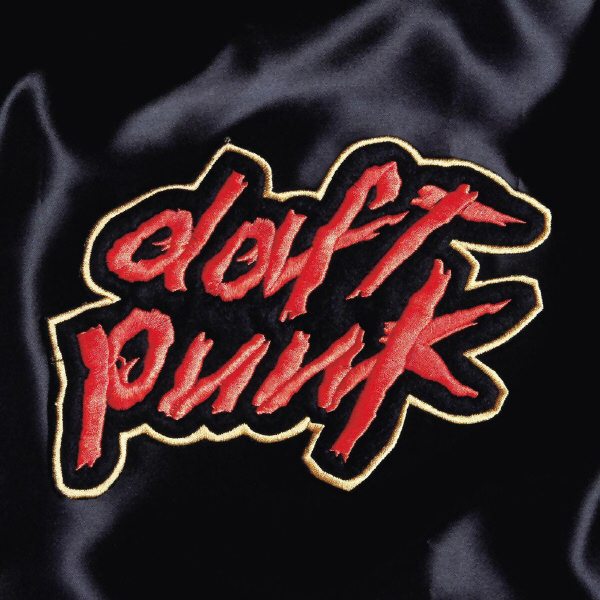 Our final big test was Daft Punk’s best-known song from their first album: Around the World. The ascending intro is particularly nice, and the song’s constant bassline and vocals allow plenty of time for experimentation with equalisers and so forth. Anyway, the reproduction here was reasonable, but even at maximum volume the bass was quite lacking.

In general, we found the treVolo sounds exceptionally clear and accurate, making it easy to pick out each instrument on a deeply layered track. The treble and mids are excellent, but bassier sections are missing a little punch. Still, the low end isn’t gone entirely, and the vast majority of songs that we tested sounded fine.

In general, we’d recommend the treVolo most for fans of lighter genres like classical, jazz, ambient, folk or pop. Bassier music – particularly stuff like DnB or metal – lacks some of its sonic oomph. Still, the vast majority of recorded music sounds clear and brilliant on the treVolo, and that seems to have been BenQ’s aim.

The treVolo has three options for connectivity: Bluetooth, a wireless connection common to phones and tablets; 3.5mm stereo, that traditional audio connection used on MP3 players and pretty much all modern mobile devices and computers; and micro USB, used to connect to computers. No cables are provided for the wired connections, which is a bother given the price of the treVolo.

The treVolo supports Bluetooth 4.1 and the high-quality aptX standard, ensuring that if your phone or tablet supports aptX, you’ll get noticeably better music quality than non-aptX Bluetooth. In theory, it should be about as good as 3.5mm or micro USB audio, and in practice I couldn’t tell the difference between these options in a blind trial. Note that iPhones and iPads do not support aptX, so you might prefer to use a 3.5mm stereo cable here.

Finally, the unit has a line-out port, allowing it to serve as a Bluetooth receiver for a larger Hi-Fi system. Given its high price this would be a foolish primary use case, but it’s a nice capability to have in reserve. 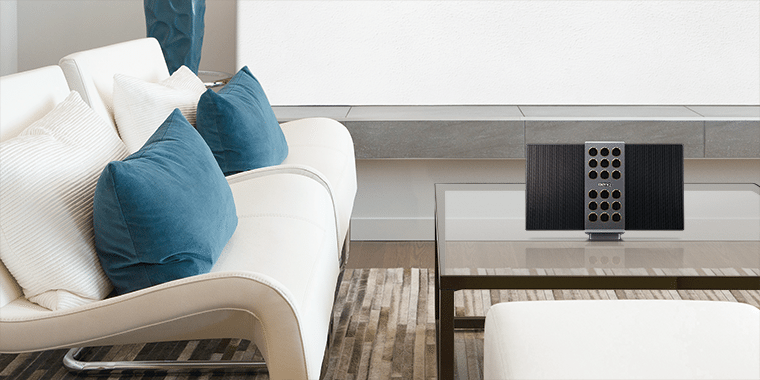 You won’t buy the treVolo to use for conference calls, but it’s nice to know that you can easily take calls that come in while you’re listening to your music, thanks to the inclusion of a microphone and buttons on the unit. FaceTime audio calls sounded great, with the caller easily audible and the caller reporting the same on the other end. We didn’t expect any problems here, and happily none occurred. Consider the box ticked.

The treVolo delivers on its promise, providing top-quality audio in a uniquely beautiful package. Whether you keep the treVolo on your coffee table or take it out for a picnic, this portable unit will provide clear and flat sound that’s perfect for lighter music like classical, jazz or pop. Fans of heavier, bassier genres will be disappointed by the quiet bass response, and audiophiles won’t like the noticeable DSP, but everyone else should be more than happy with this admittedly premium Bluetooth speaker.

Today we’re going to be looking at a high-end optical gaming mouse from Mionix, the Naos 7000. The Naos...