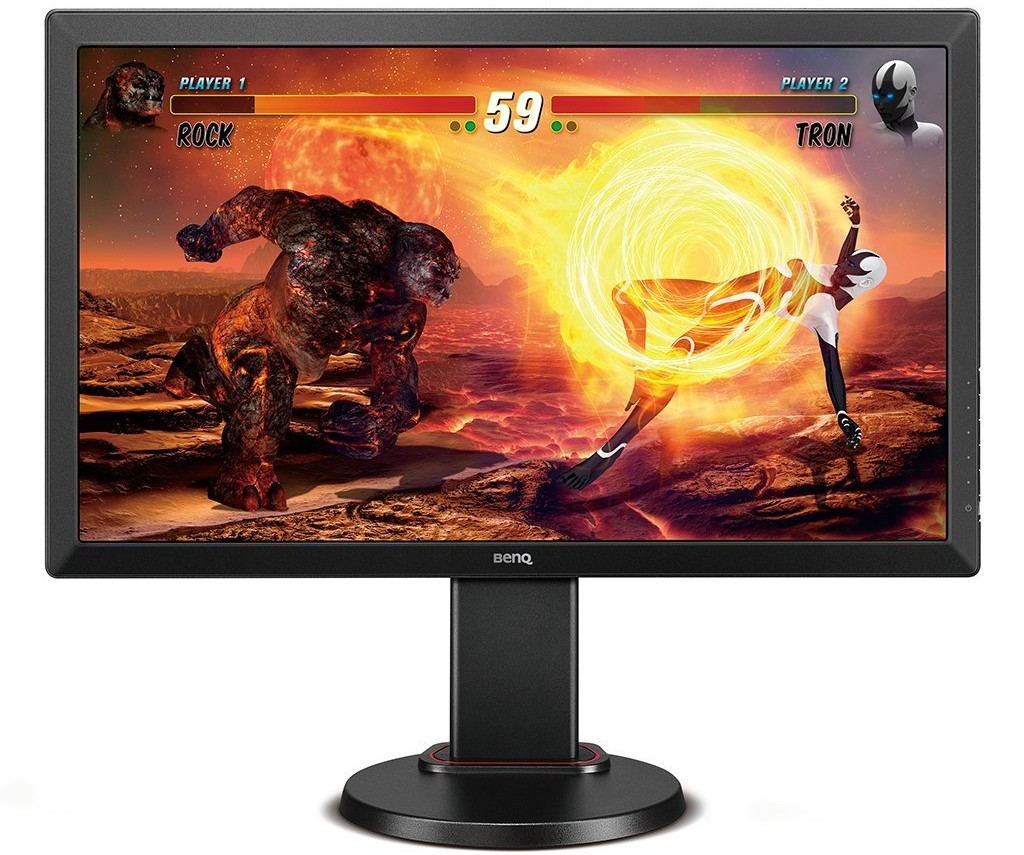 Today we’re looking at the BenQ RL2460HT, a gaming monitor designed for console gamers that want something smaller and more portable than the average 40-inch HDTV. It boasts a Fighting mode designed by Street Fighter legend Justin Wong, and an HDMI output for streaming without input lag. We liked the earlier RL2755HT, so how does the newcomer compare?

The BenQ RL2460HT is a solid gaming monitor for console players, offering minimal response times, loads of gaming presets and centimetre-accurate adjustability. The HDMI streaming mode is excellent too. While PC gamers should look for a monitor with better resolution and/or refresh rate, for console gaming it doesn’t get much better.

The RL2460HT looks quite ordinary at first glance, with a simple blank matte frame enveloping the 24-inch 1080p screen. A solitary BenQ logo sits in the bottom centre, with a thin red line highlighting the circular base.

The back of the monitor is similarly styled, with matte black plastic everywhere apart from the glossy black BenQ logo at the top. The stand is attached via a standard 100×100 VESA mount, allowing you to install a desk or wall mount if you prefer.

The monitor is fairly slim when seen in profile, with little ornamentation (or indeed features) to attract the eye on either side.

Look a little closer though, and you’ll get our first indication that this isn’t a run-of-the-mill monitor. There are centimetre markings along the back of the monitor, allowing you to note your favourite height and return to it when setting up your monitor again.

We also have a sextuplet of buttons here, for controlling the OSD. These are easily located, thanks to white circles on the side of the monitor, and offer a good tactile response when pushed.

The OSD is comprehensive, offering access to a wide range of settings and modes. All of BenQ’s favourites are here: a blue light reduction mode, a black equalizer mode (makes dark areas lighter) and Instant Mode (reduces input lag).

There are also a wide range of presets for gaming and beyond, which can be expanded through the Display Pilot software. There’s standard, movie, photo sRGB, eco, RTS (1/2), fighting, FPS and gamer (1/2/3). 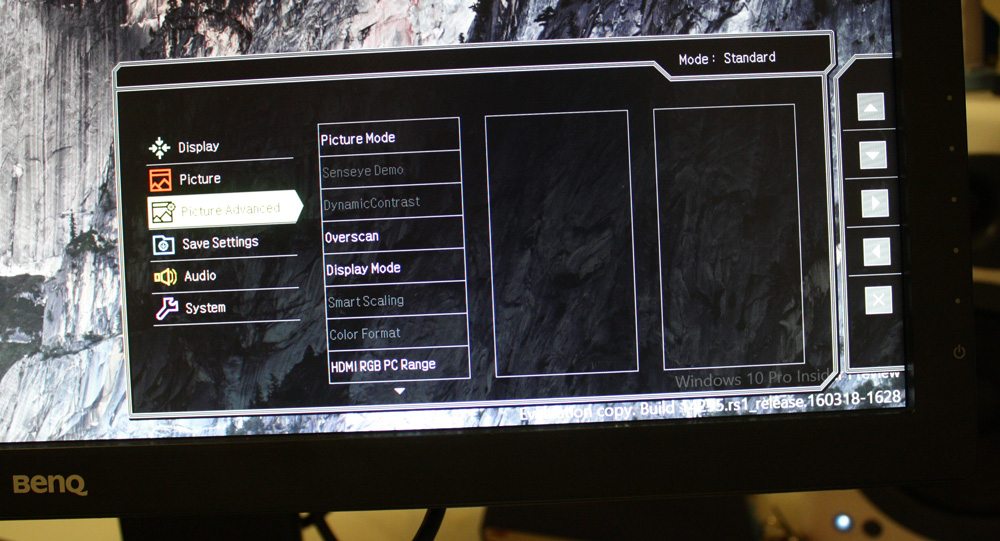 The back of the monitor is home to its ports, all of which are downward facing and clearly marked. We have power and the headphone passthrough ports on the left side (as seen from the back), with video inputs (and outputs) on the right. These include two HDMI inputs, one HDMI output, one DVI-D input, and one VGA input.

The bezels around the screen are fairly thick; you wouldn’t want to use this for a multi-screen display… but then again, being a console-oriented monitor, you probably wouldn’t want to in the first place.

All in all, it’s a sensibly arranged monitor with a few telltale signs that it’s more than your bog-standard office monitor.

First up, some basic stats before and after calibration. We can see the monitor hits our targets fairly evenly, only off by a few points. DeltaE values for white point and 50% gray are both 0.2, which is a great performance. Gamma is a little high, though. 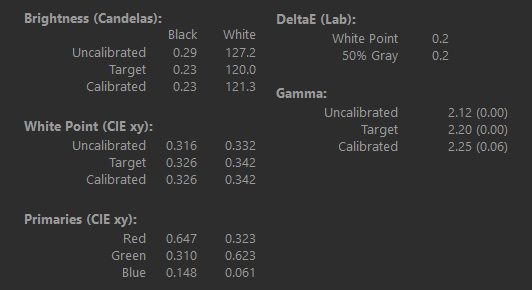 The gamut of the display is decent, hitting 99% of sRGB and 77% of the less commonly used AdobeRGB standard. That means you could theoretically use this monitor for Photoshop work on PC, although I’d generally recommend an IPS-type display for this instead. 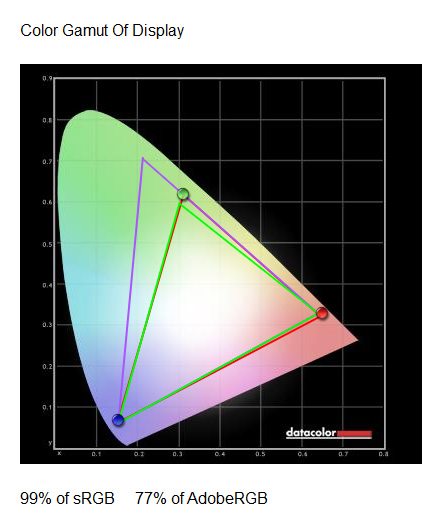 Colour accuracy is also important; ideally we want to see low Delta-E values that represent accurate colours. The average value, 1.26, is pretty amazing for a TN-panel monitor. For comparison, two BenQ IPS-type monitors we tested recorded average DeltaE values of less than 1.0. I believe 1.26 is the best Delta-E value we’ve ever recorded for a TN monitor, so big props to BenQ for this. 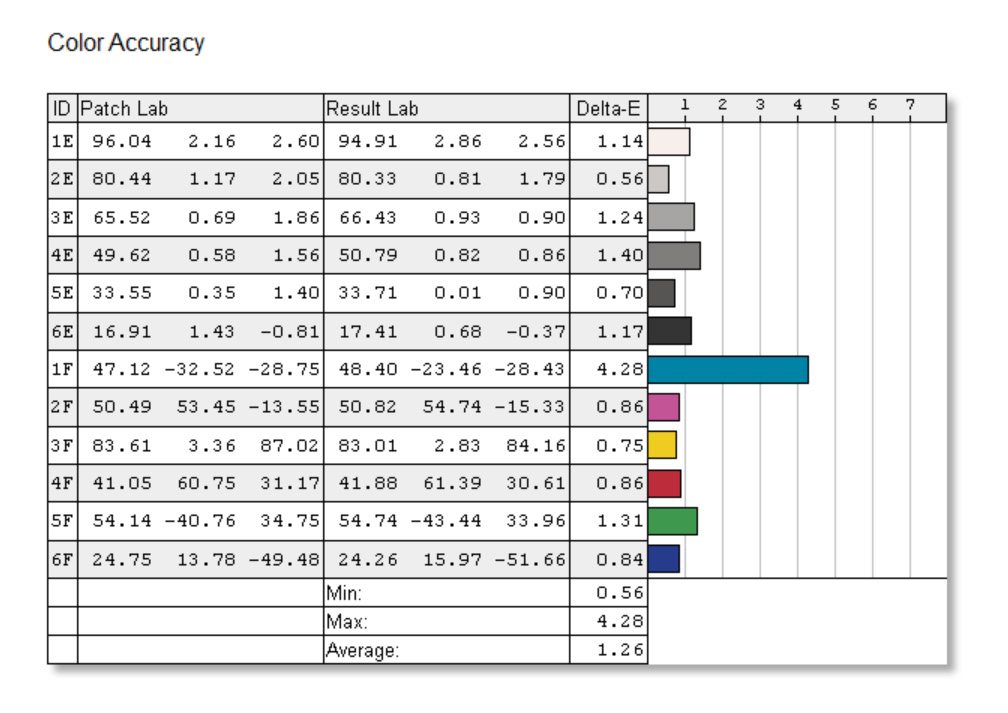 Uniformity is a measure of how colour and brightness differ between different quadrants of the monitor. Here, the BenQ monitor again impresses, with Delta-E values largely sitting below 1.0 at all but the highest brightness settings. 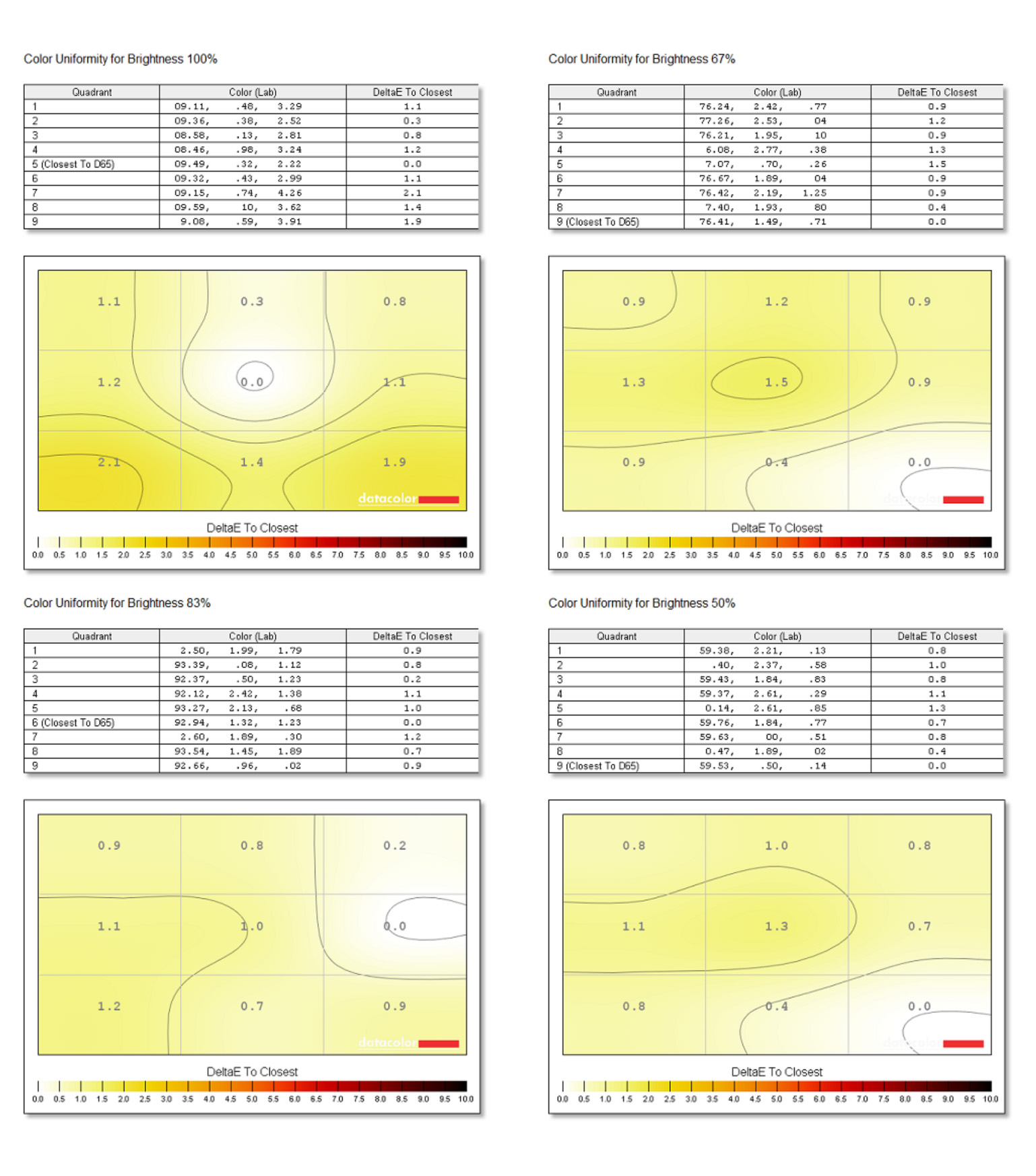 It’s a similar story when it comes to luminance uniformity, with excellent results across the board. 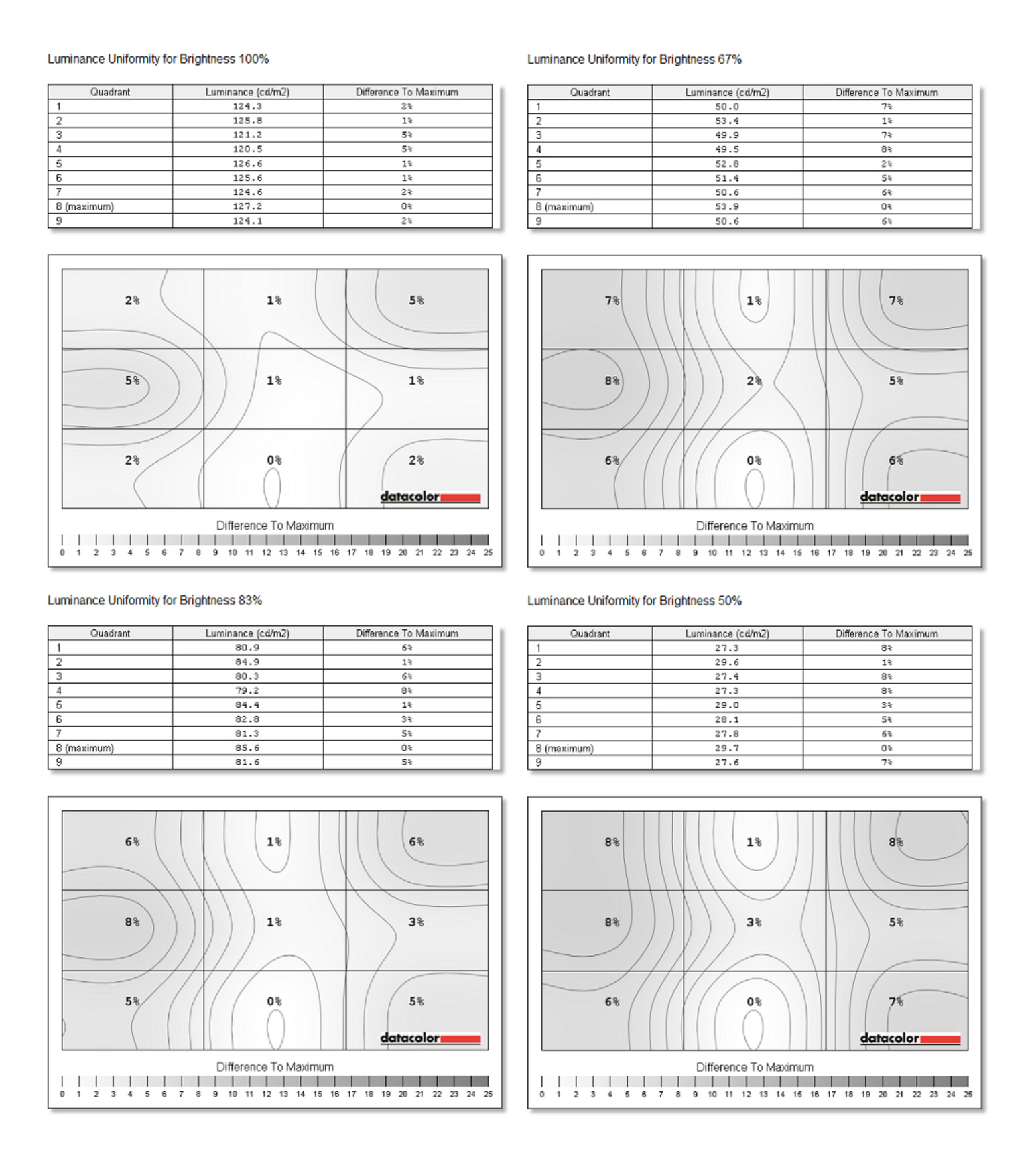 Display gamma is also right on the money; you can see how closely the recorded curve fits the gamma 2.2 standard below. 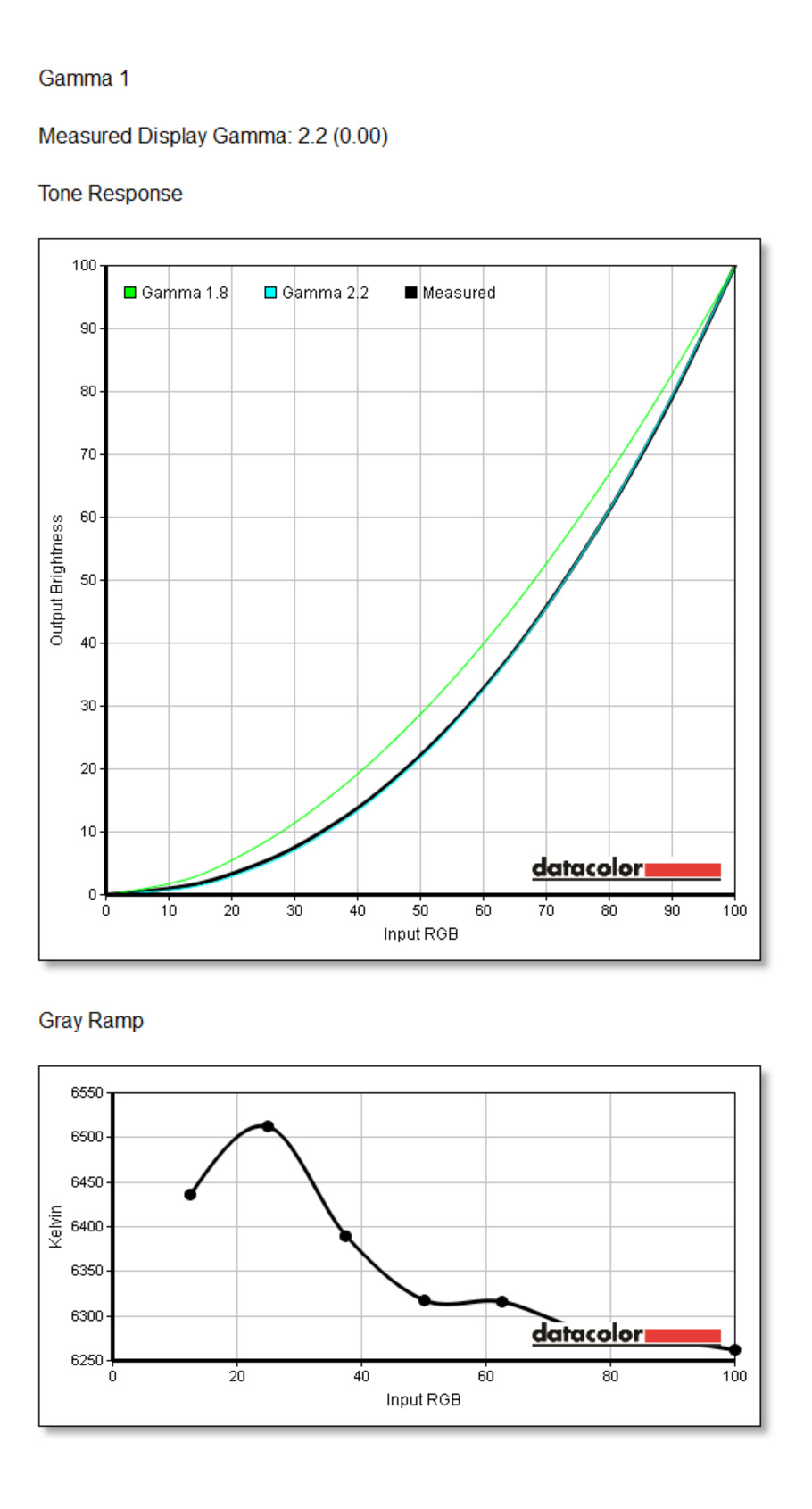 Contrast improves steadily as brightness increases, although our calibrated display is running at a 41% setting. The Spyder4Elite produces incorrect contrast readings, so this is only useful as a trend rather than an actual contrast measurement.

Overall, the RL2460HT proves that you don’t need an IPS display to perform well when it comes to colour accuracy, uniformity or gamut. The monitor is among the most accurate of all we’ve tested when it comes to TN panels, and rivals some IPS displays. Great work by BenQ here. 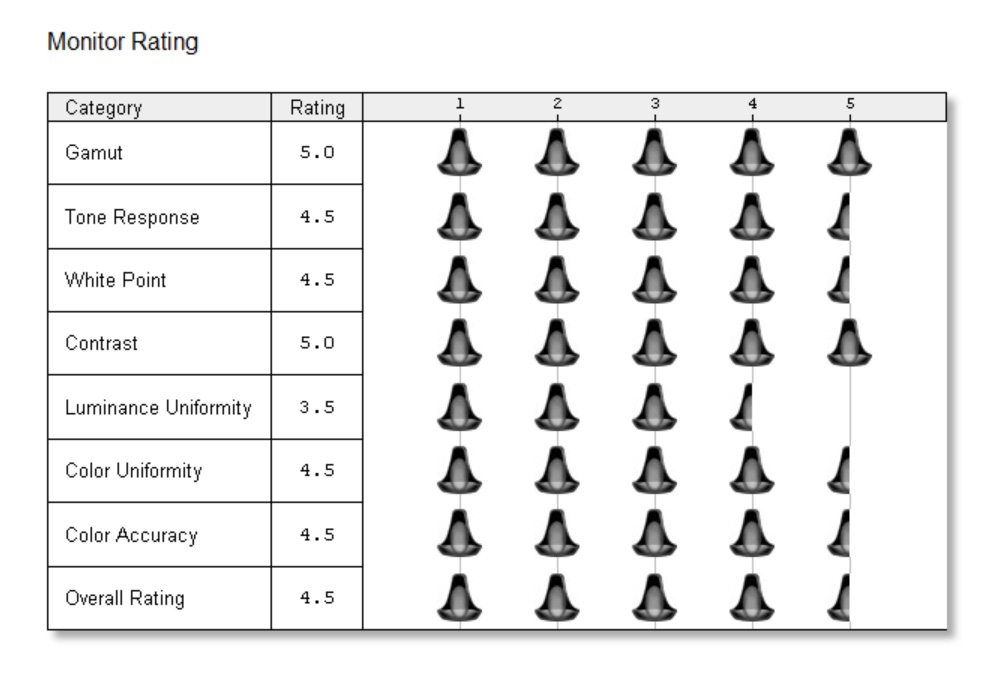 Now we’ll move onto our first-hand impressions after using the monitor for a couple of weeks. We tried console gaming (of course!), PC gaming, watching films and streaming via the HDMI out port. Here’s how it worked out.

We played a few different games on the RL2460HT, all on the Xbox One. Forza 6’s 1080p/60 fps gameplay suited the monitor well, with the game feeling responsive and looked great.

(Below: an accurate depiction of driving hypercars on wet American circuits, regardless of the monitor you’ve selected.) 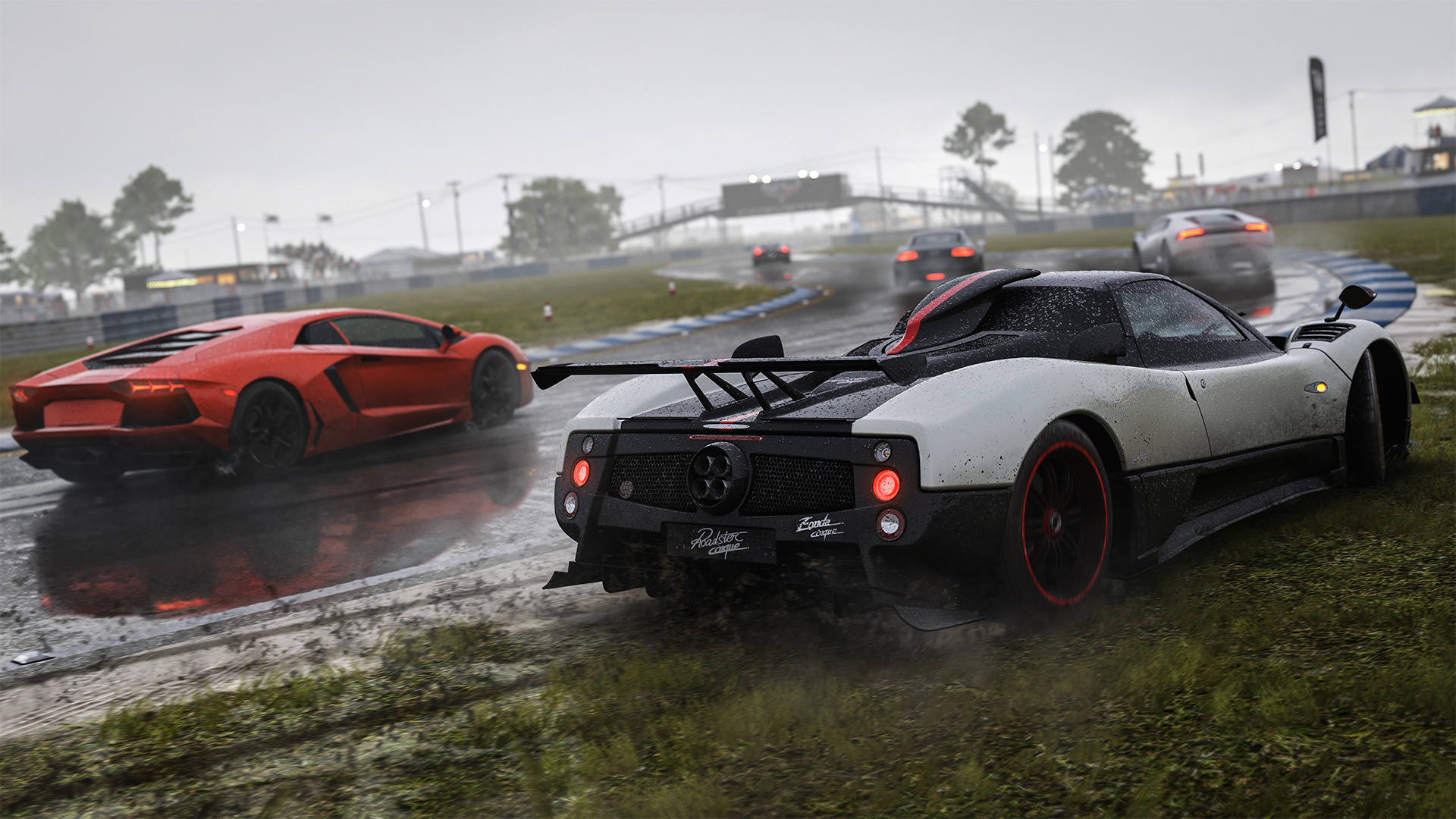 Our fighting game of choice was Killer Instinct, and it was reproduced well on the RL2460HT. The Fighting mode preset didn’t offer much of a difference over the other gaming modes however, with nearly identical brightness and colours and no obvious difference in responsiveness.

We tried a few other games, and generally were impressed with the monitor. Its 24-inch span means you’ll be sitting close, but games looked good and the monitor never felt like it was holding us back.

We used the Hauppage HD PVR 2 Gaming Edition for this test, which we reviewed in 2013. Connecting it up is all pretty straight-forward; you just need to connect an extra HDMI cable to your streaming box of choice. (Razer’s Ripsaw looks pretty good, for example.)

Once you start, your monitor will simultaneously output to its own display and your streaming box, bypassing the input lag problems that are inherent to having a streaming box between your console and monitor in the HDMI pipeline.

It all worked surprisingly well, both doing local recording and streaming to Twitch via an attached PC. While this feature is less useful than it was in the previous console generation, it’s still a nice extra to find in your monitor, and streamers of fast-paced games could certainly find it useful.

One important thing to note is that the HDMI output mode doesn’t work with other inputs; you can’t connect a source via DVI-D or VGA and output it via HDMI; it only works HDMI to HDMI. Given the preponderance for HDMI in current generation consoles, this isn’t a significant limitation.

In order to complete our testing, we watched a few episodes of Better Call Saul and Jessica Jones on the Xbox One Netflix app. We found the screen had reasonable viewing angles and decent colours, although it still paled to our Sony TV and a nearby IPS monitor. A 24-inch diagonal is a little small for watching films unless you’re sitting quite close, but it’s fine for YouTube clips and the like. 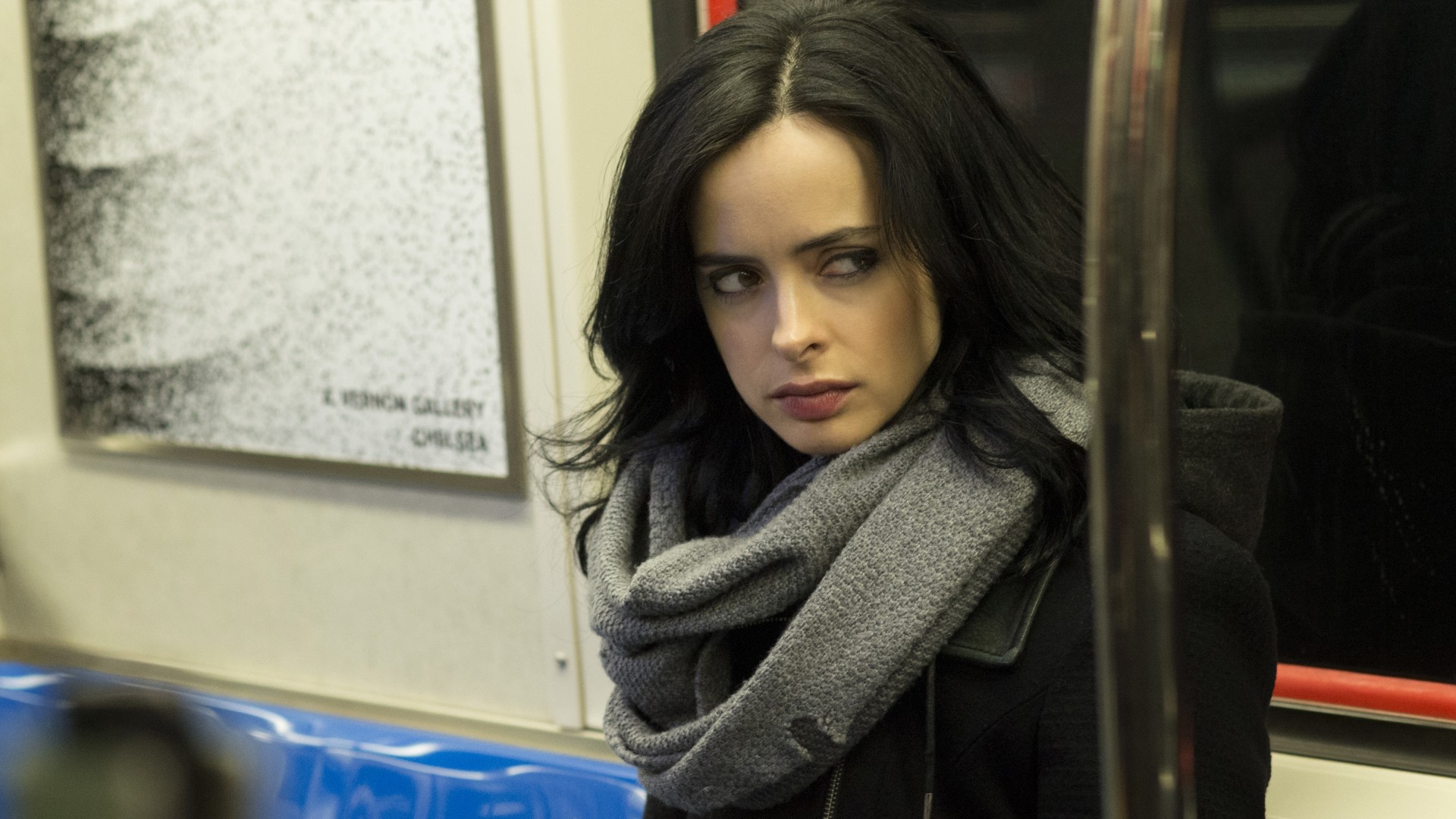 While the RL2460HT is great for console gaming and decent for movies, it just doesn’t suit PC use. The 1080p resolution feels limiting after being used to 1440p or even 4K, and the 60Hz refresh rate is too low for competitive PC gaming in many genres.

It’s not a terrible monitor by any means, but it just wouldn’t make sense to get this monitor when a higher-specced IPS monitor is a similar price (e.g. BenQ GW2765HT), or you could go for a 144Hz high refresh rate monitor like the XL2411Z for about £200.

The RL2460HT is a success for BenQ; a console-gaming monitor that provides exactly the sort of features you’d want and none that you wouldn’t. The 24-inch 1080p TN panel’s low response time makes it great for playing fast-paced console titles, although its low refresh rate and resolution precludes it from serious use on a PC. It may not look flashy, but this monitor will be a faithful companion.

Today we’re looking at Element Gaming’s 600W PSU, courtesy of Ebuyer. The 600W model is the... 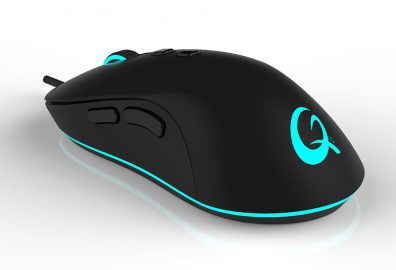 QPAD DX-20 review: what is this, an optical mouse for ants?

Optical mice are in. Pro players love them because they have no mouse acceleration, allowing for pinpoint...