Aorus X5 v6 review: the return of a titan 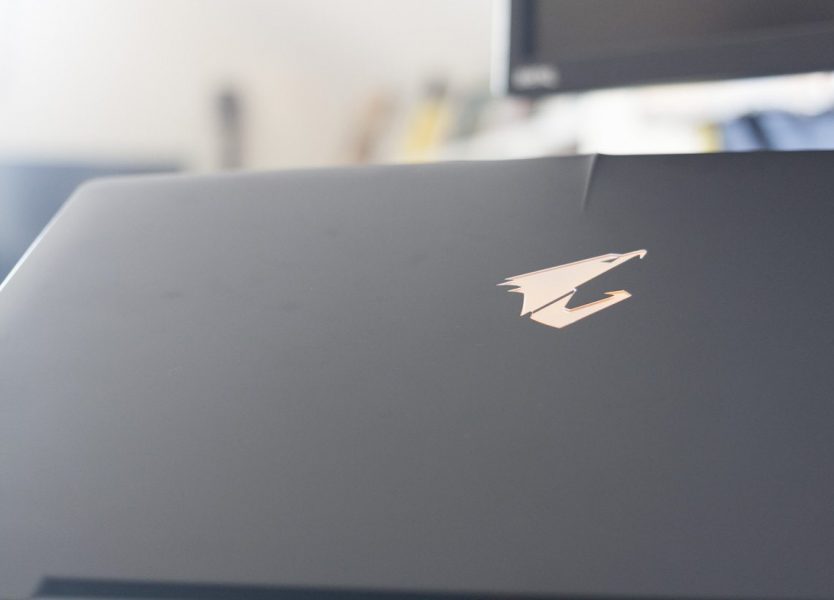 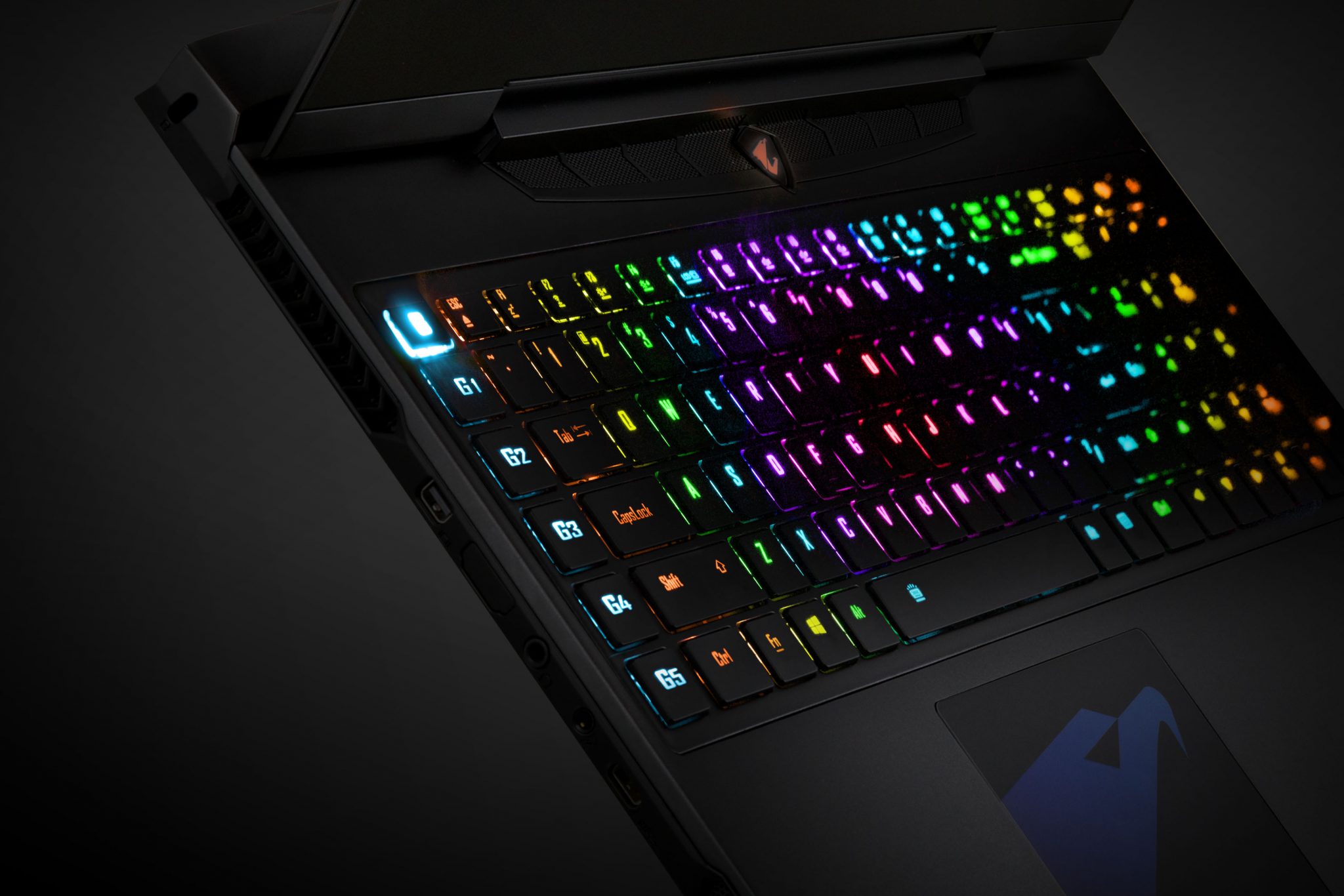 The Aorus X5 has returned! Our favourite laptop of the year so far has been upgraded with a new GTX 1070 graphics card, an RGB keyboard and a more powerful, overclockable processor. Here’s our full review.

The Aorus X5 v6 is a mighty upgrade; the most powerful laptop we have ever tested. The design is top notch too, wide and tall yet slim and relatively portable. The keyboard is a bit bouncy for our tastes, but otherwise it’s hard to find anything much wrong with the Aorus X5 v6. If you can afford its high asking price, you’ll get an enchanting top tier laptop. 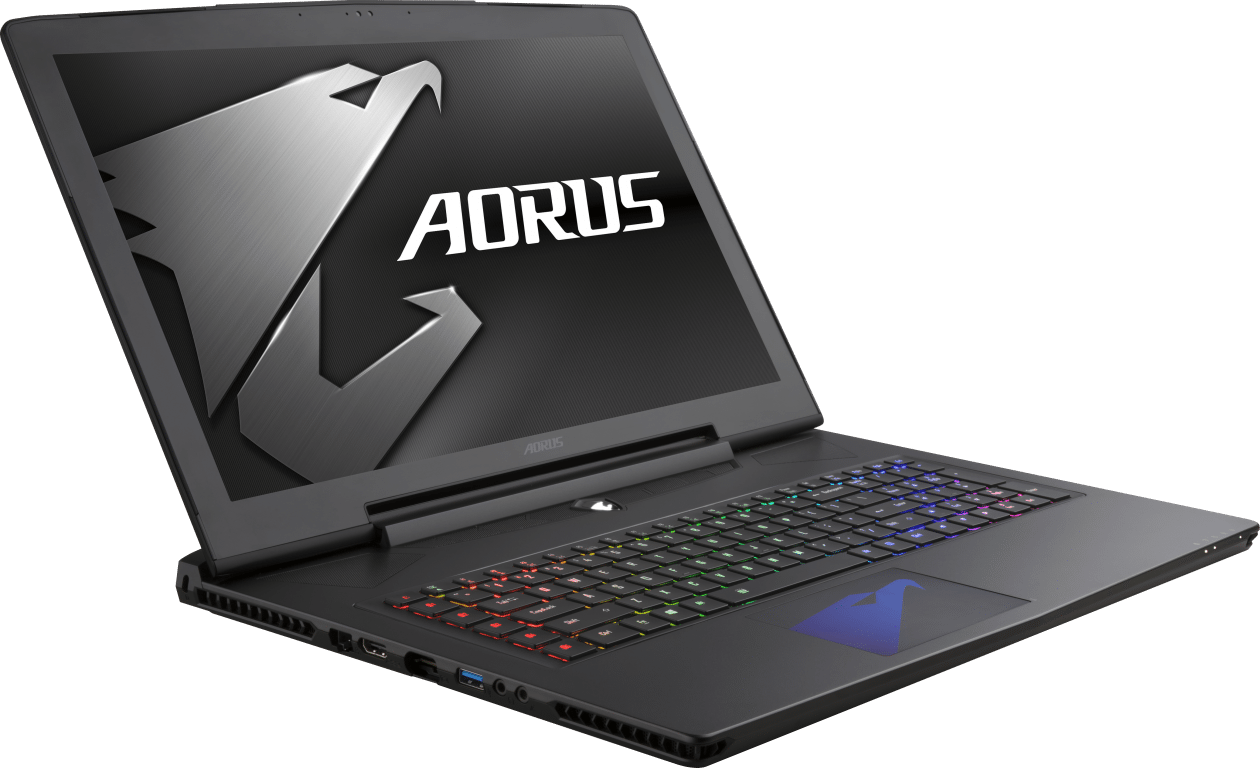 Like its predecessors, the Aorus X5 v6 is an expansive yet slim laptop, wrought of black aluminium and replete with grilles to cool the monster components inside. While most of the major revisions of the v6 model have happened inside, there are also some external changes from past X5 laptops. 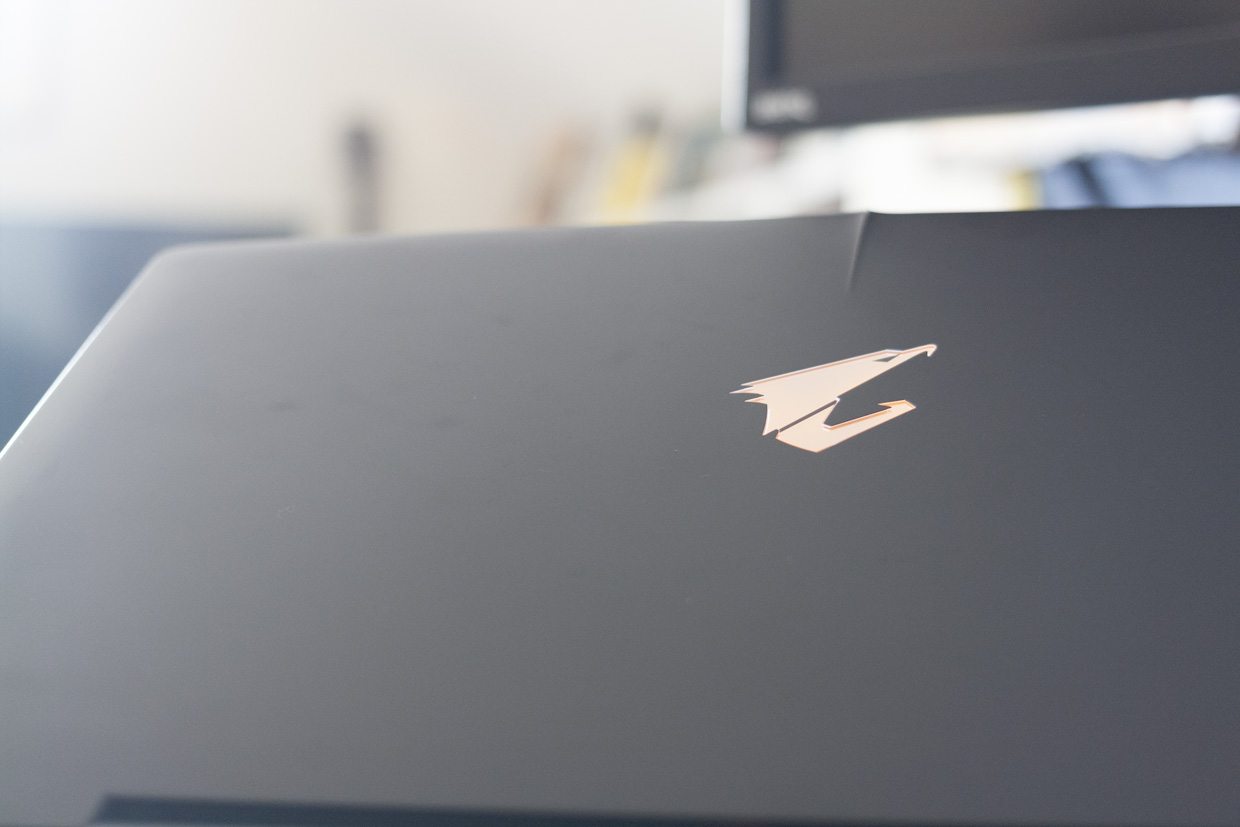 The glass Aorus logo on the lid and the power button now are backlit in orange, a nod to the new RGB capabilities of the keyboard. The Aorus wordmark and the status LED legends are also printed in orange; everything was white before. It’s not a change that I’m 100% behind — I think coloured lights are very much more a matter of taste than white lights and legends — but it’s not awful either.

The overall look of the laptop is still more professional than most gaming laptops on the market, with a few stylised design elements on a slim, sleek matte black chassis. 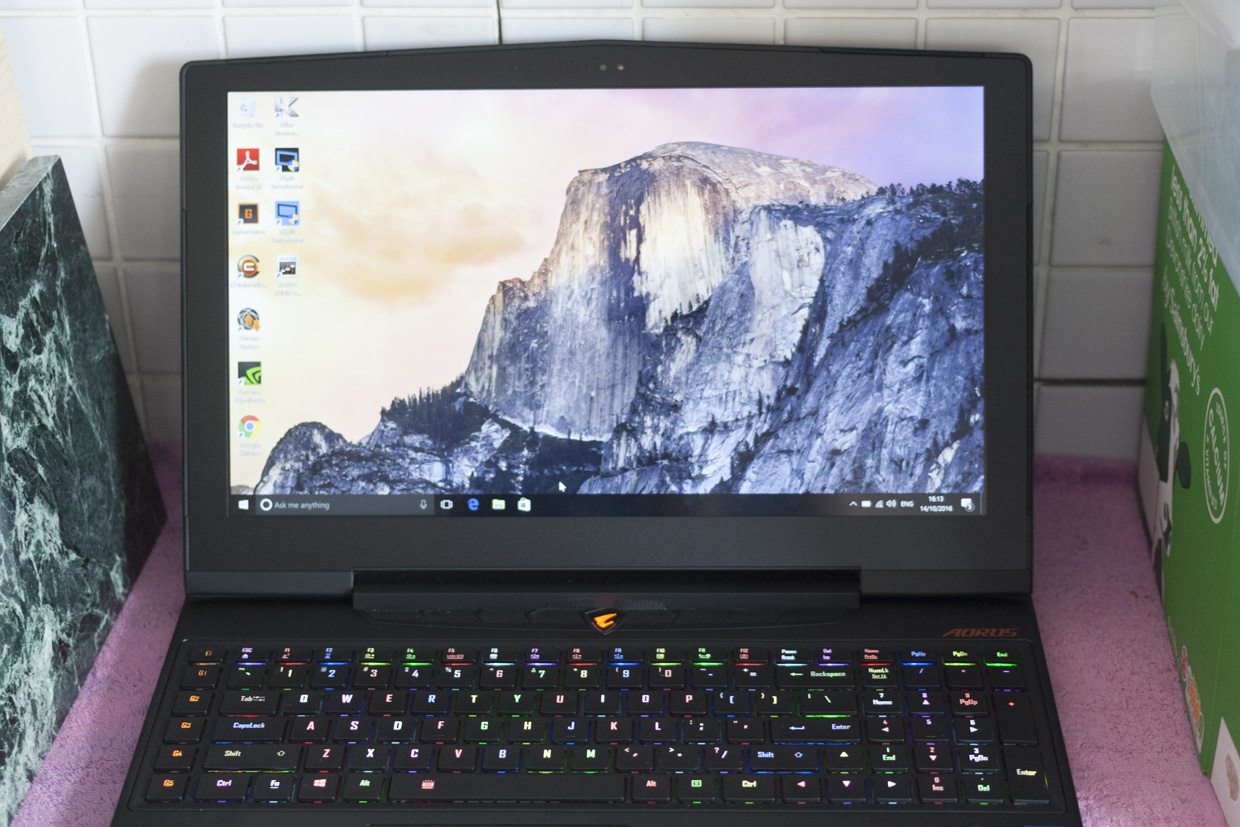 The laptop has a 15.6-inch screen, which can be either a 2880 x 1620 G-Sync display, or a 1920 x 1080 120Hz display. We have the first option, which is better for web browsing, media and more cinematic games. If you played more fast-paced games, like MOBAs or shooters like Counter-Strike, then the 120Hz option would be a better choice. Either way, the screen is IPS, so viewing angles and colour reproduction are pretty good.

Our review unit has a US layout keyboard, so it features a short Enter key, a wide left Shift key, etc. I assume proper UK layouts will also be available. 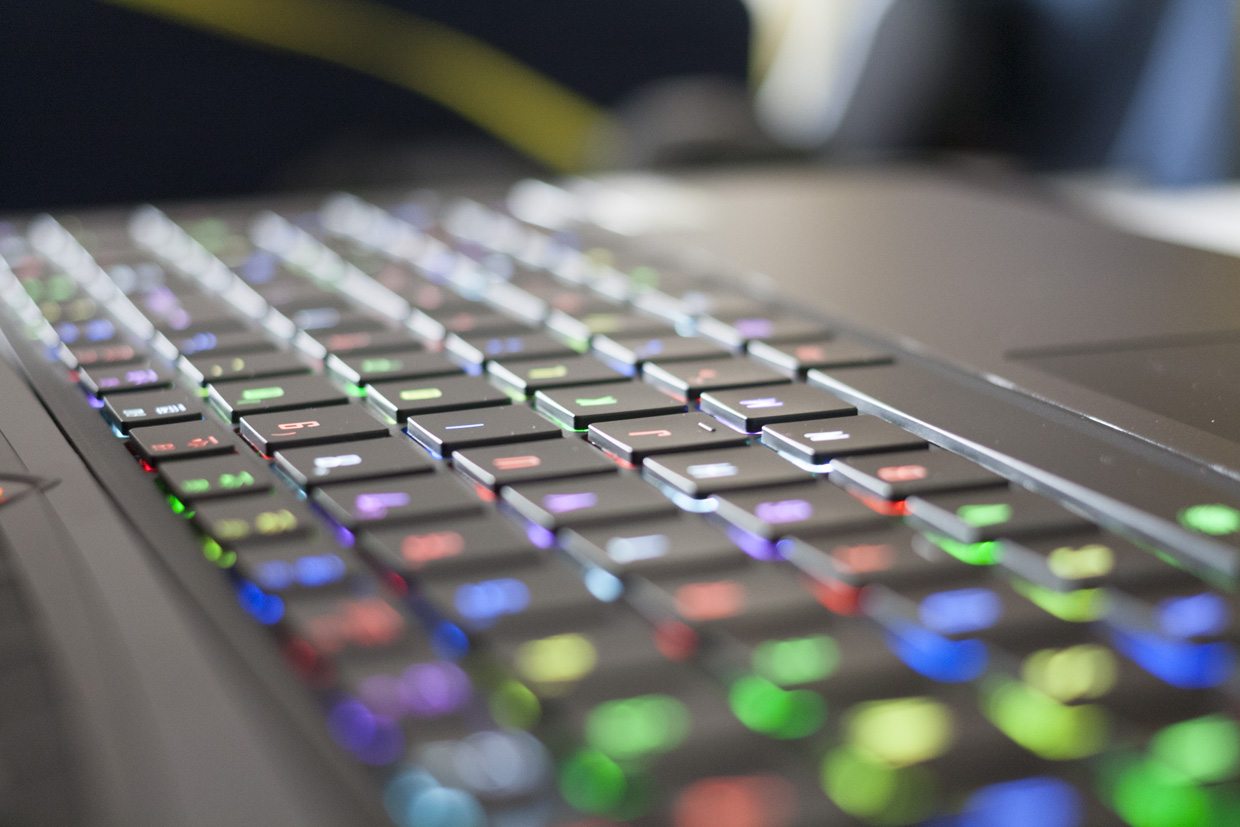 The laptop’s key legends have been revised, with a new blockier font that better allows the new RGB backlighting to shine through. The white outlines for the WASD keys have also been dropped.

This makes for a much better looking keyboard overall. The keyboard seems to have increased travel compared to its predecessors, with a little more bounce and flex evident in the keyboard area. Whether or not you’ll like this change is a matter of preference; I don’t mind it.

Below the keyboard is the wide and expansive trackpad, which now has a blue falcon instead of the white one that lived there previously. The trackpad is easy to use and works well; no complaints here. 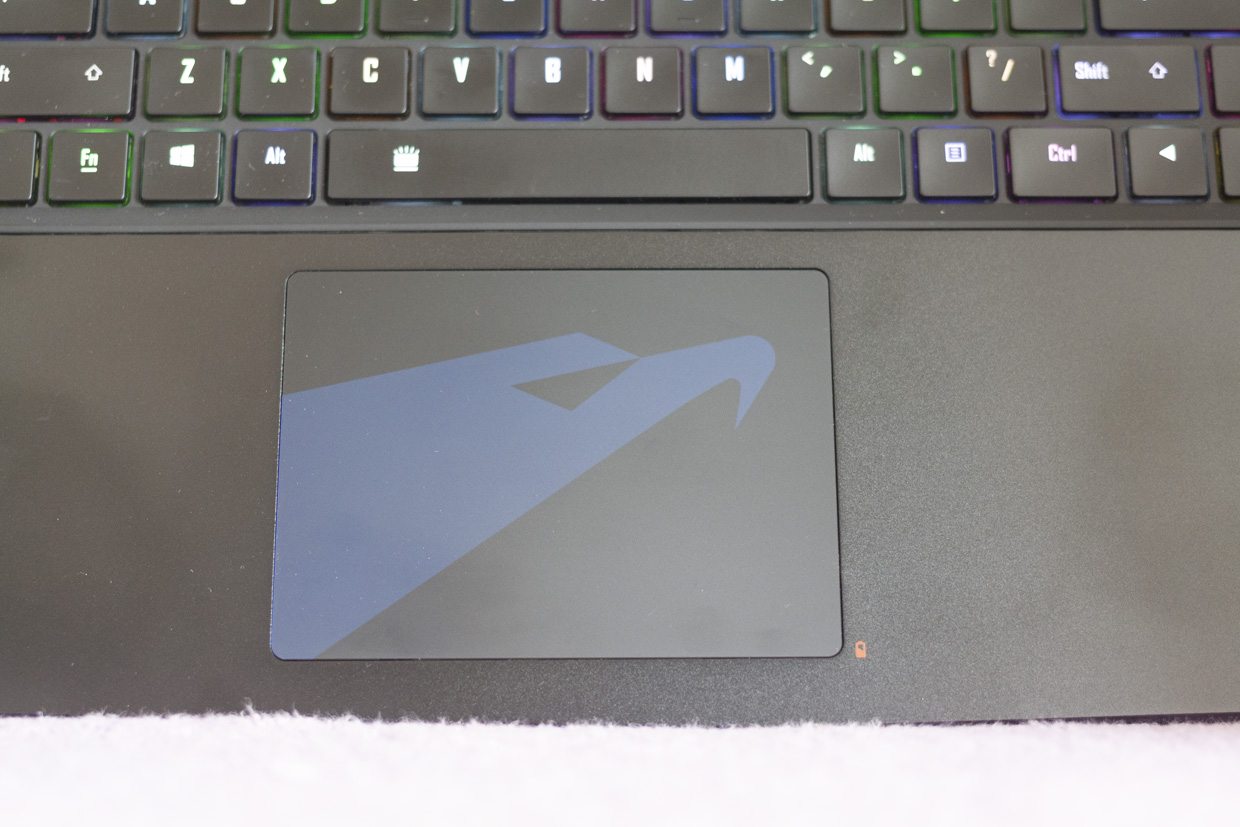 Now, it’s time for the Ross Port Report, with our reporter in the field, Ross. How are the ports looking, Ross? 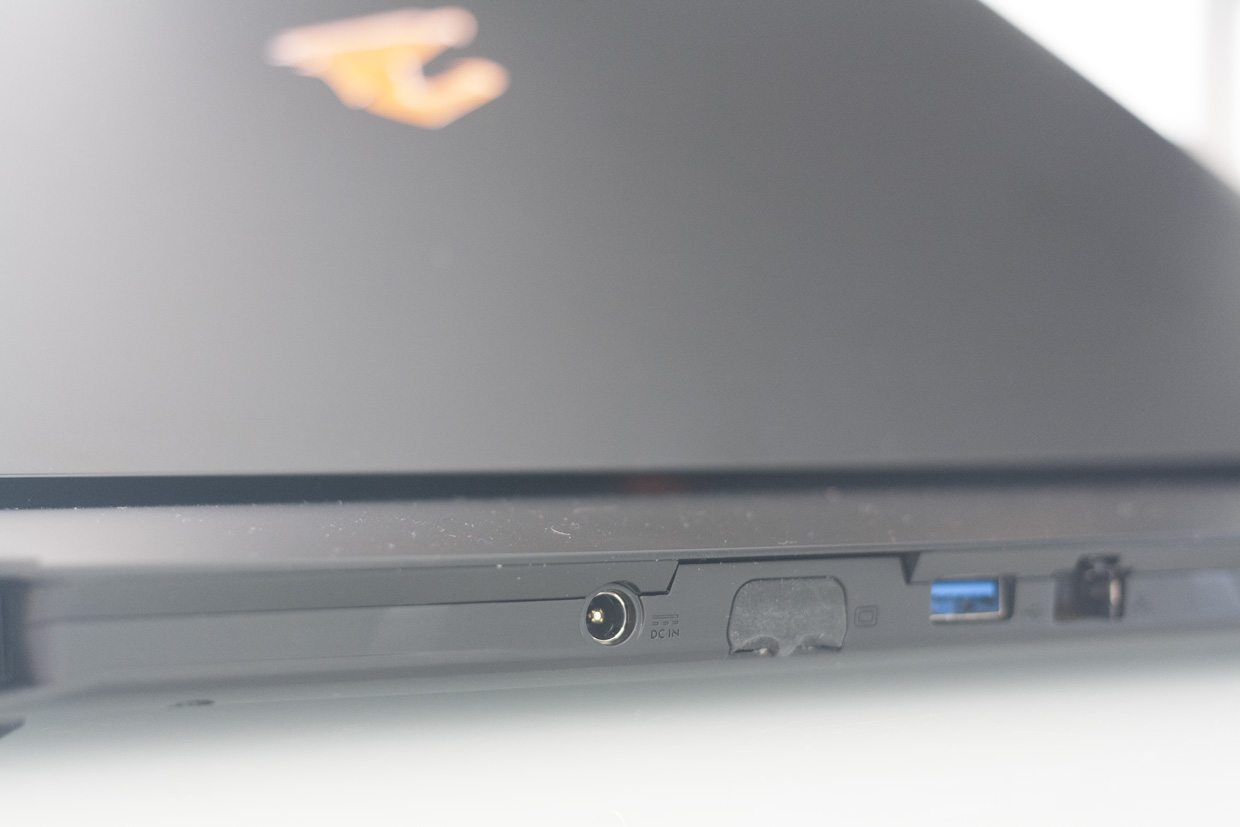 We’ve got ports on three sides this time, with USB, ethernet and power on the back. There’s also what looks to be a VGA port under a cover, but the cover falls into pieces if you try to remove it; that’s a bit weird. 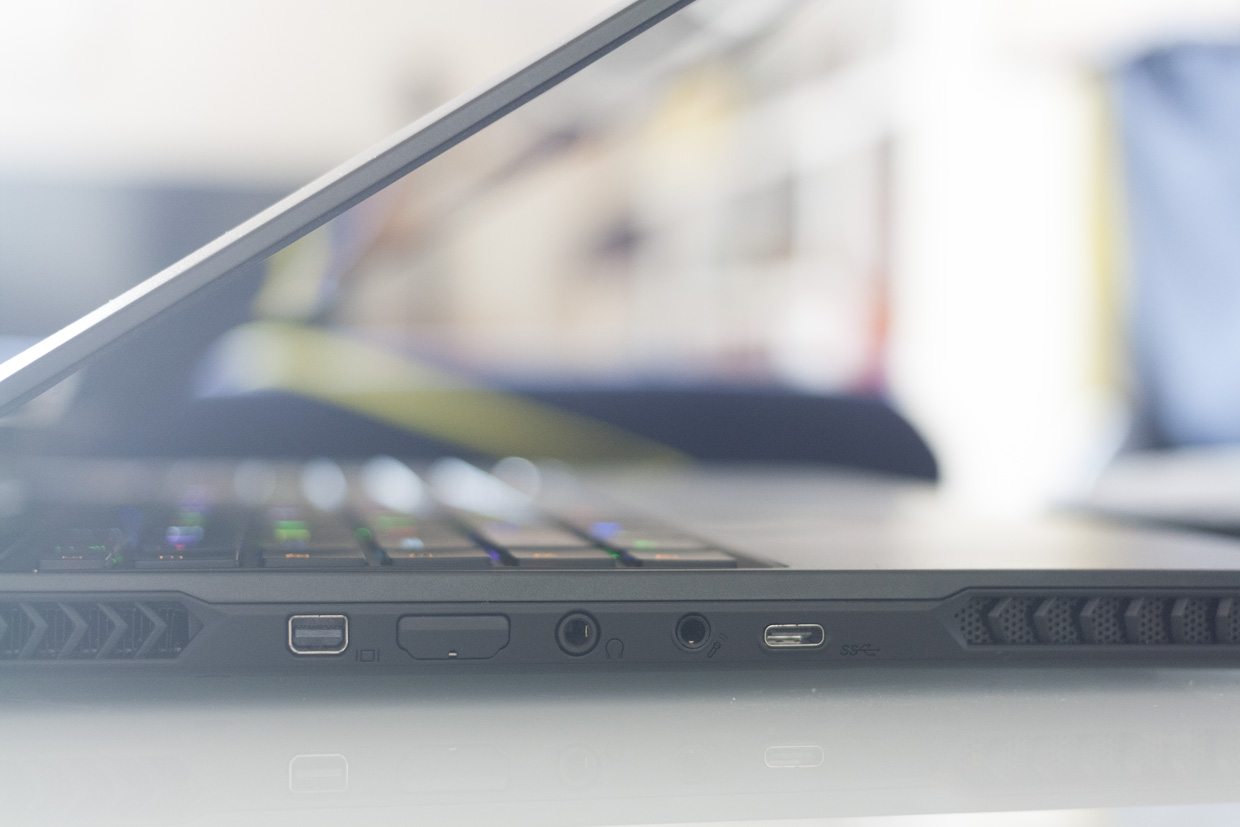 On the left, we have a new-fangled USB-C port, a couple of 3.5mm headset ports and Mini-DisplayPort. There’s also an HDMI port hidden under a cover. 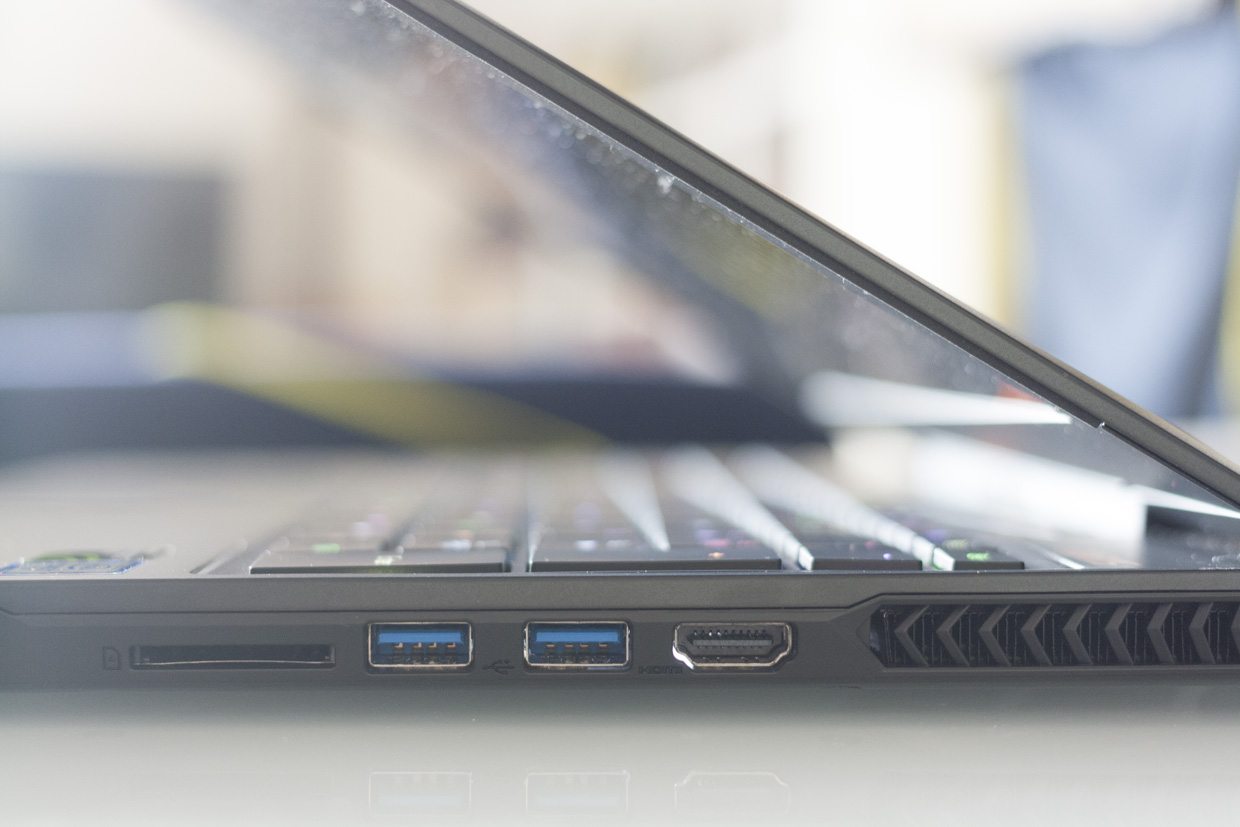 So overall a good layout, although an extra USB port here or there wouldn’t go amiss. The covered ports are also something of a mystery; we’ll try to find out more.

Thanks Ross. Now, let’s move onto the benchmarks and testing!

We’ll be looking particularly closely at how the Aorus X5 v6 matches up against the Gigabyte P35X and P37X v6, which use the same GTX 1070 graphics cards. Other names you’ll expect at the top of the pack are the few gaming desktops we’ve looked at — the Stormforce Inferno and 442, the Acer G6 and even the 1080-toting XSR rig. Let’s get started.

We also examined performance in the new DX12 Time Spy test. Although we don’t have many other test results here yet, we can say that the Aorus X5 v6 got a score of 5338. By comparison, the P37X got a score of 4916, and the P35X got a score of 4812 — so still a noticeable upgrade.

Cinebench examines OpenGL (GPU) and CPU performance in two separate tests. The Aorus machine comes 2nd in the OpenGL test, with a strong score of 136 fps — just faster than the excellent (if a bit old) XMG U506 and several desktop machines, including the XSR rig! The CPU tests are mostly a wash, however.

OpenGL performance has become less relevant over the recent years, so this benchmark is less significant than some of its peers — we’ll probably retire it for 2017.

GeekBench is up next, which is largely a test of processor and memory performance which uses a bunch of common computation tasks. The Aorus X5 v6 scores a solid 13,000 in the multi-core test, just a hair behind two of our gaming desktops. It’s an impressive result that speaks to the strength of the laptop’s processor.

CrystalDiskMark tests disk speed performance. The Aorus X5 v6 comes with a Samsung 950 Pro NVMe (PCI-e) drive as their predecessors, and thus commands a super speedy 1600 MB/s for sequential reading and 1300 MB/s for sequential writing. This is an awesome result, and you shouldn’t face any issues with long loading times for your computer, apps or games.

Next up are true in-game performance benchmarks, offering a look at how this system handles a selection of recent titles including shooters, MMOs and strategy titles.

Our first game test is Tom Clancy’s The Division, a cover shooter MMO set in the frozen wastes of post-viral-outbreak NYC. The Aorus X5 v6 outdoes the Gigabyte machines, with a score of 80 fps. The game is playable at the native resolution too, just about hitting 60 fps.

Bioshock Infinite represents the easiest workload for our test machines, but it’s still important given just how many games of its era use the same Unreal Engine. You’ll face no problems on the Aorus X5 v6, with a crazy-fast score of 194 fps at 1080p — our second-highest ever.

Metro Last Light is a much harder workload… but the Aorus X5 doesn’t care. It scores the highest ever fps total in the test, at an average of 139 fps. That’s significantly higher than the SLI’d GTX 970s of the Aorus X7 v5, for context, and suggests we should be able to play this title at the laptop’s native resolution above 60fps — awesome!

Company of Heroes 2 has one of the most difficult benchmarks we use, offering a kind of ‘worst case scenario’ rather than something more typical of either the singleplayer campaign or multiplayer. The Aorus X5 v6 is able to hit 73 fps, which is quite an achievement — and it’s nearly 25% faster than the Gigabyte machines, which have slower processors.

We conclude with a look at performance in a large-scale RTS, Total War: Rome 2. The Aorus X5 v6 again impresses in this GPU-bound title, with a score of 131 fps at Ultra settings at 1080p. That ensures we can use our native resolution without dropping down any settings — impressive.

Overall then, strong results across the board. Most games are GPU-limited these days, and for these games the GTX 1070 delivers awesome performance at 1080p. Let’s take a look at its native 2880 x 1620 performance now, shall we?

To get to grips with the Aorus X5 v6, we used it for about a week — frantically gaming, writing and Photoshopping.

We were able to play most games at a stable 60 frames per second at the laptop’s native resolution, with older games hitting much higher frame rates. Counter-Strike: Global Offensive, for example, was routinely hitting between 250 and 300 fps at highest settings and that native 2880 x 1620 resolution. Even the recently released Dark Souls 3 held a comfortable 60 fps at its maximum settings and resolution. 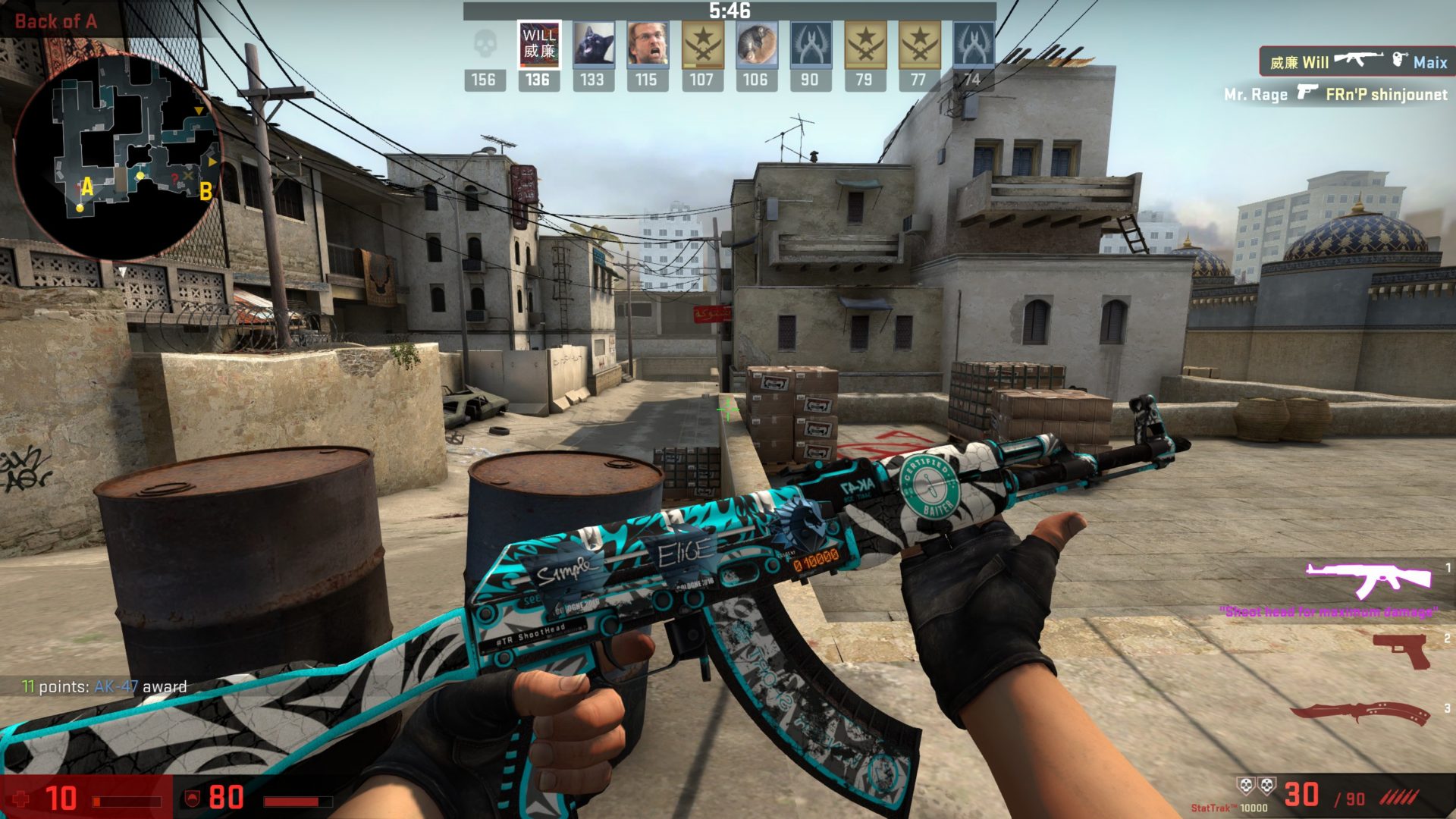 For the odd game that felt a little choppy at its native resolution and high settings, it was always possible to drop down to 1080p to ensure a smooth experience. For example, the Witcher 3 ran at about 50 fps at native resolution, but never dipped below 60 at 1080p. If you’re willing to accept a downgrade in graphical fidelity and you’ll be spending most of your time gaming rather than working or surfing the web, then choosing the 1920 x 1080 120Hz screen might be a good choice. The lower resolution screen also doesn’t need to be scaled, so you don’t have to deal with the odd game or app that doesn’t support scaling very well — Civilization V, for example, has a tiny UI when played at 2880 x 1620.

The bad stuff: a few bugs

When testing the Aorus, I did run into a few bugs that seemed like show-stoppers. The wireless kept flaking out while downloading updates, and the keyboard seemed to have a mind of its own, occasionally pressing unusual keys and combos like F1 or Ctrl+F all by itself. A refresh of the system seems to have cleansed these gremlins however, as neither issue has returned.

Since then, there’s been little to truly complain about with the Aorus X5 v6, beyond the noise of the fans while playing games and new bounciness in the keyboard. Neither are deal breakers by any means, however.

The good stuff: pretty much everything else

The X5 is a pleasure to use, all around. The screen is beautiful to look at, the keyboard and trackpad don’t get in the way and the laptop has enough horsepower to smoothly handle any game at 1080p (and quite a few at its higher native resolution, too).

There are just enough ports to get all of your peripherals plugged in, and it’s slim enough to just about fit in the average 15-inch laptop bag. It looks the part too, sleek and powerful without being too gaudy. 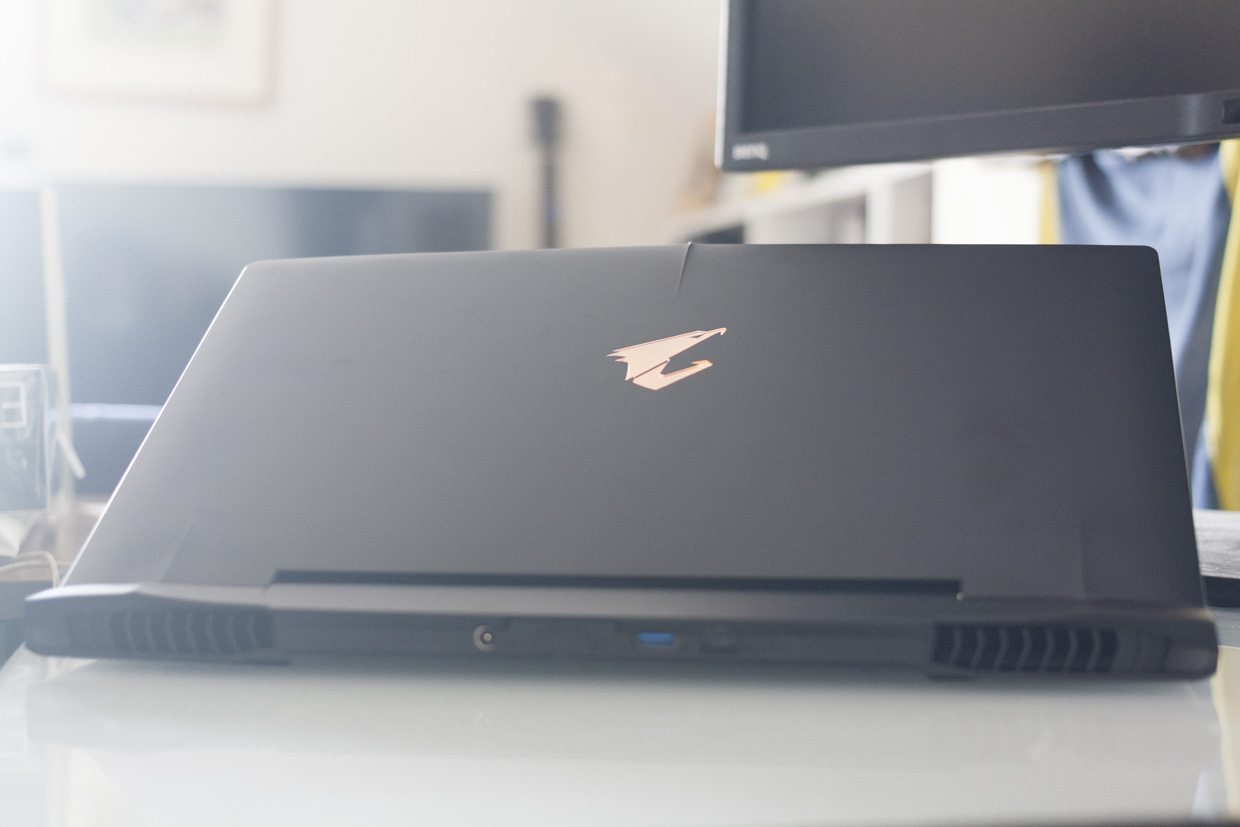 If you do want a more eye-catching, over the top look, then the RGB backlighting of the keyboard has you covered. There are plenty of lighting modes to choose from. Some are eye-catching and frenetic, others soothing and stylish, and you can just set it to one colour (or white) if you want to blend in a little better at your next office meeting.

Ultimately though, we have to remember this laptop’s price: over £2000. That’s enough to get a slim work laptop *and* a killer gaming PC — and the latter will be easily upgradeable, too. Even with this in mind, the X5 is still hard to resist — this laptop is just too damn cool.

The Aorus X5 v6 is an incredible gaming laptop, capable of rivalling even recent desktop machines in performance while still being light and portable. It’s not an inexpensive machine, even by gaming laptop standards, but with so many strengths and so few flaws it’s hard not to recommend. 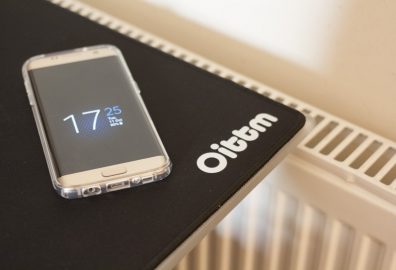 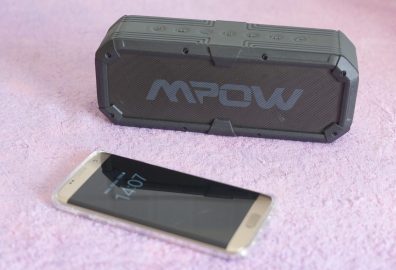