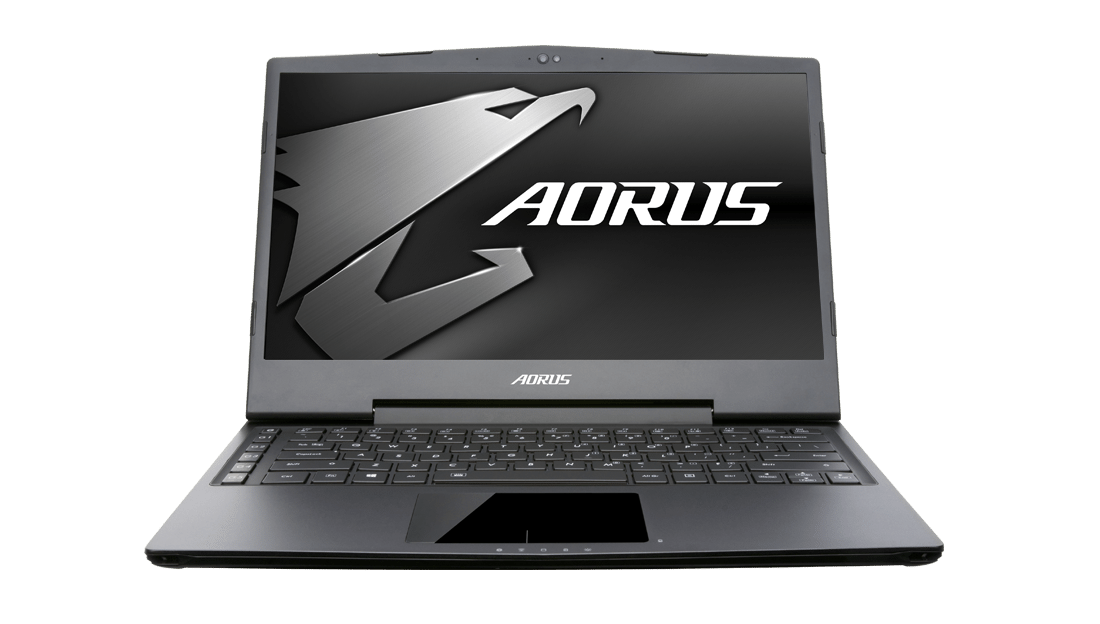 The original Aorus X3 Plus was a beast when we reviewed it last year, with a 3K display, GTX 860M graphics card and i7 processor packed into a tiny 14-inch aluminium chassis. Today we’re back with the latest version, the v3, which promises even more power thanks to the latest Nvidia GTX 970M GPU and Core i7 CPU. Let’s see whether it delivers on that promise!

Changes from original Aorus X3 Plus are written in orange. The CPU has been slightly downgraded compared to the original, but game performance should be significantly better thanks to a more recent and higher-end GPU (GTX 970M vs GTX 860M in the original). One USB 2.0 port has been converted to USB 3.0 and faster 1866 RAM is also available.

Note: Specifications are for the model given. For full specifications, please refer to your retailer and/or the Aorus X3 website. 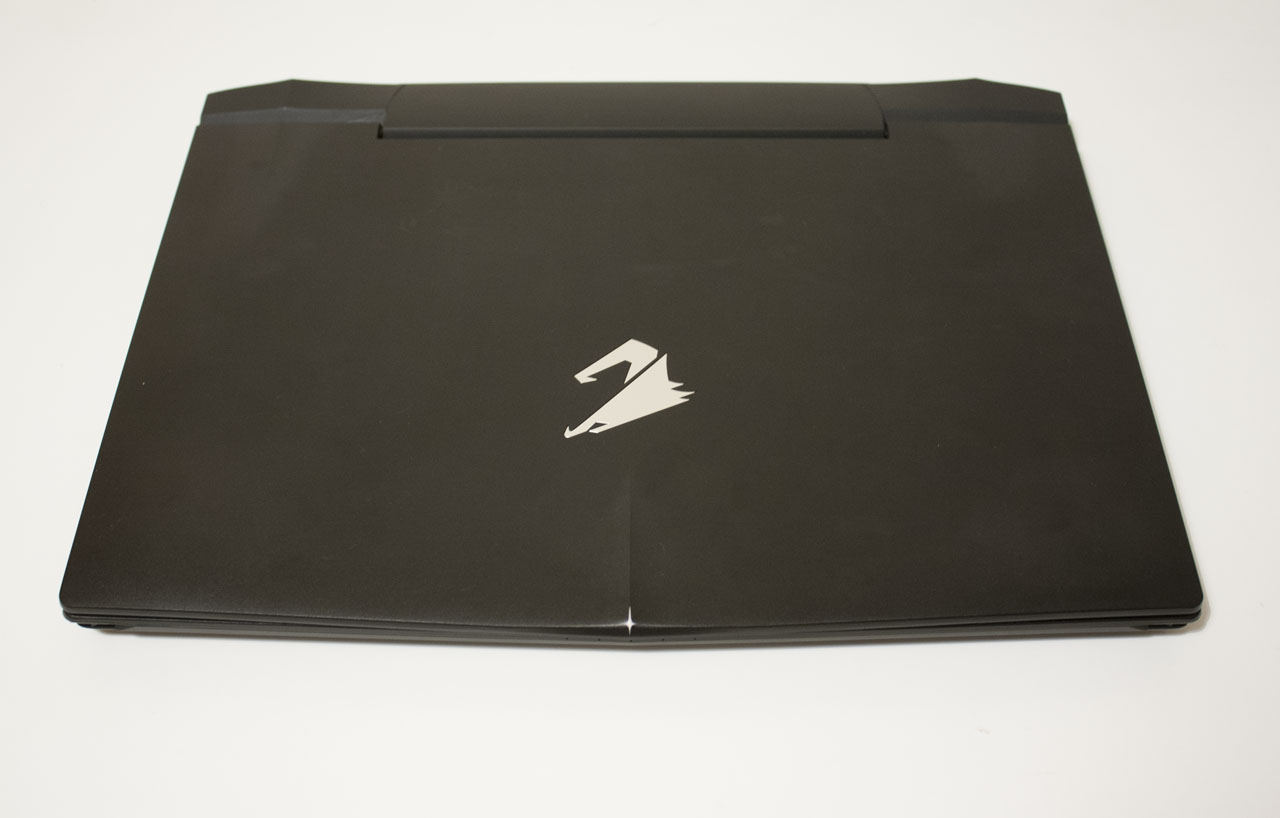 The Aorus X3 Plus remains unchanged in terms of design, with the same slim anodised aluminium chassis in black that packs in a full-size keyboard (sans number pad), a fancy glass touchpad and a 3K 14-inch display. 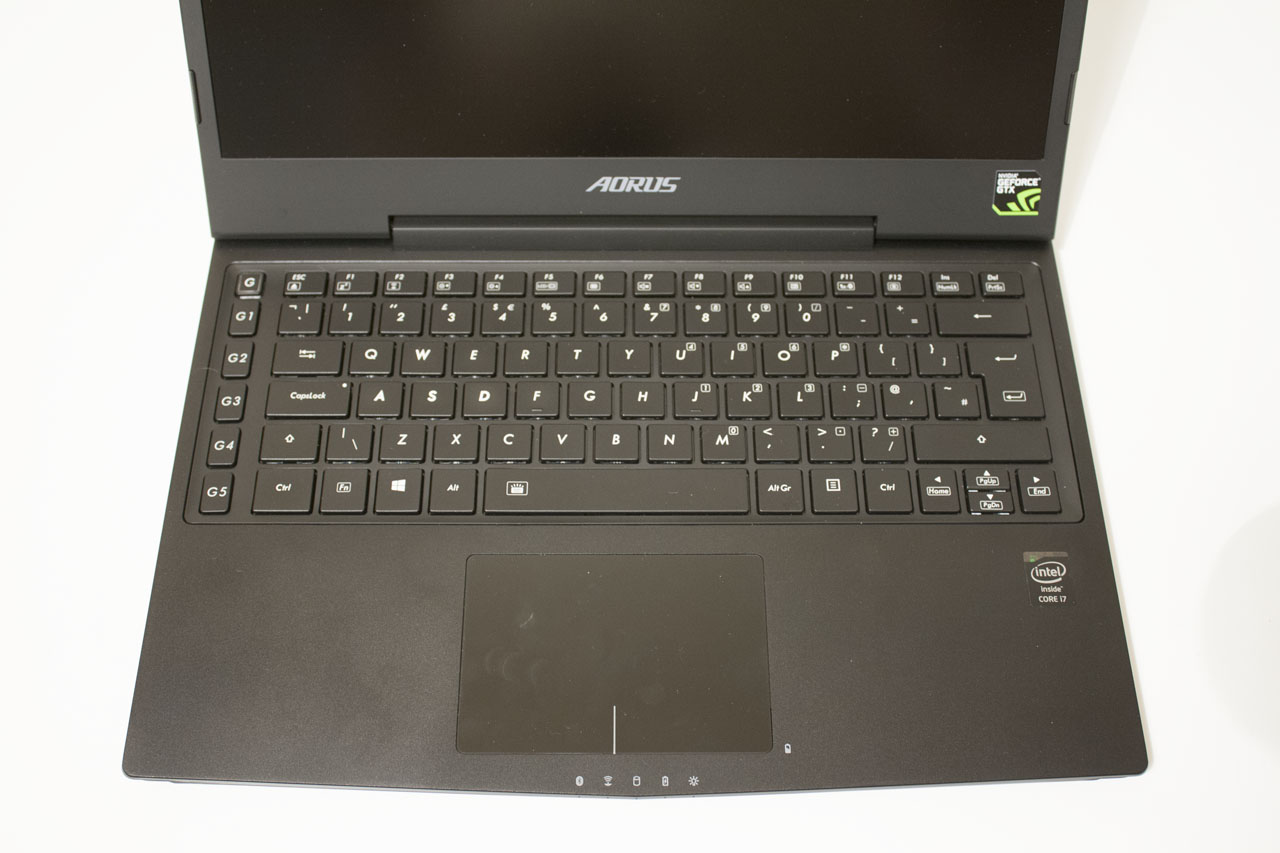 There’s a good complement of ports on the left and right sides, including 3 USB 3.0 ports, HDMI and DisplayPort, headphone jacks and an SD card reader. The ethernet and power cables are on the back, where they won’t get in the way of your peripherals. 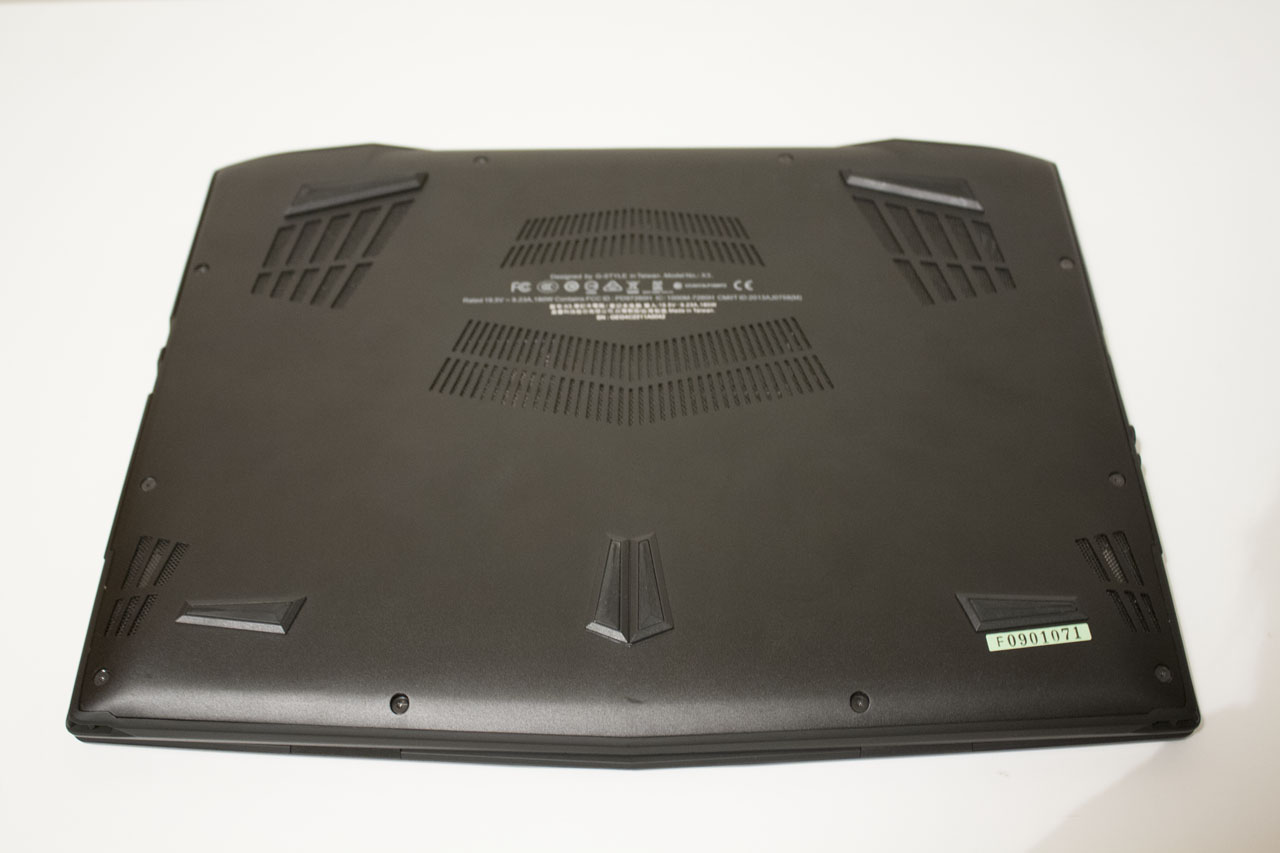 The overall look is somewhere between ‘gamer’ and ‘professional’, with a few angular lines and the oversize exhaust ports on the back providing a few hints that this isn’t just a boring business laptop. For a full look at the Aorus X3 Plus, please check out the design section of the original review.

In order to evaluate the Aorus X3 Plus v3, we used it for a period of about four weeks, testing it for both work and play. Here are some of the games we played:

The Aorus X3 Plus v3 is a hyper-efficient gaming monster, continually surprising you with the level of performance in can deliver in such a compact package. I didn’t find any games that the laptop couldn’t handle, including some of the most demanding titles of the current generation. 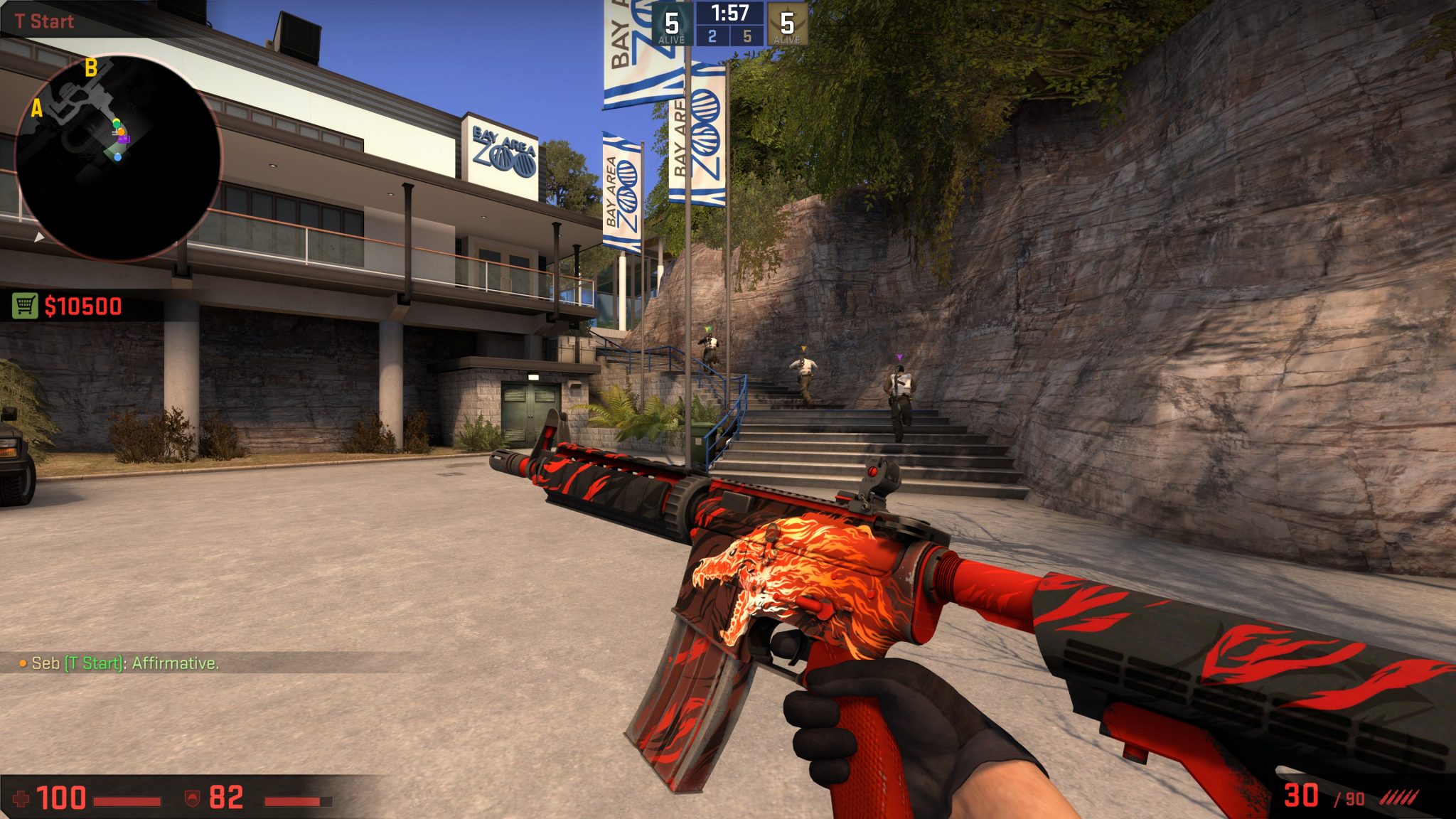 The laptop can handle less-demanding games like CS:GO or StarCraft II at the native 3200 x 1800 resolution and high settings, which is super impressive. More modern or intensive titles like Metro: Last Light generally require either a drop in resolution or graphical quality (or both), but this is true of pretty much all gaming laptops. As the display is very high resolution, it’s possible to run games in a “pixel-doubled” mode, i.e. at 1600 x 900 instead of 3200 x 1800. This produces a much easier performance target without resorting to a stretched display, and is a good first port of call if a game doesn’t run well on the X3 Plus v3 at the high native resolution.

Aside from the powerful processor and graphics card, the X3 Plus v3 also benefits from a quality storage solution, with two or three SSDs in a RAID0 configuration. This confers no advantage to redundancy compared to a standard single drive setup, but does markedly increase transfer speeds to make games and levels load rapidly. Of course, it also makes all those out-of-game tasks a little faster as well – installing drivers, downloading comms programs or clearing out space for a new title.

The laptop’s wired and wireless connections are also up to snuff, with a Killer gaming-grade network solution including gigabit ethernet and dual-band WiFi ac. It’s hard to tell how much the Killer software and hardware combo helped compared to a non-branded solution, but in any case lag was minimal whether we were wired up or using the wireless – just remember you’ll need a WiFi ac router and a fast internet connection to make full use of the laptop’s wireless speeds. 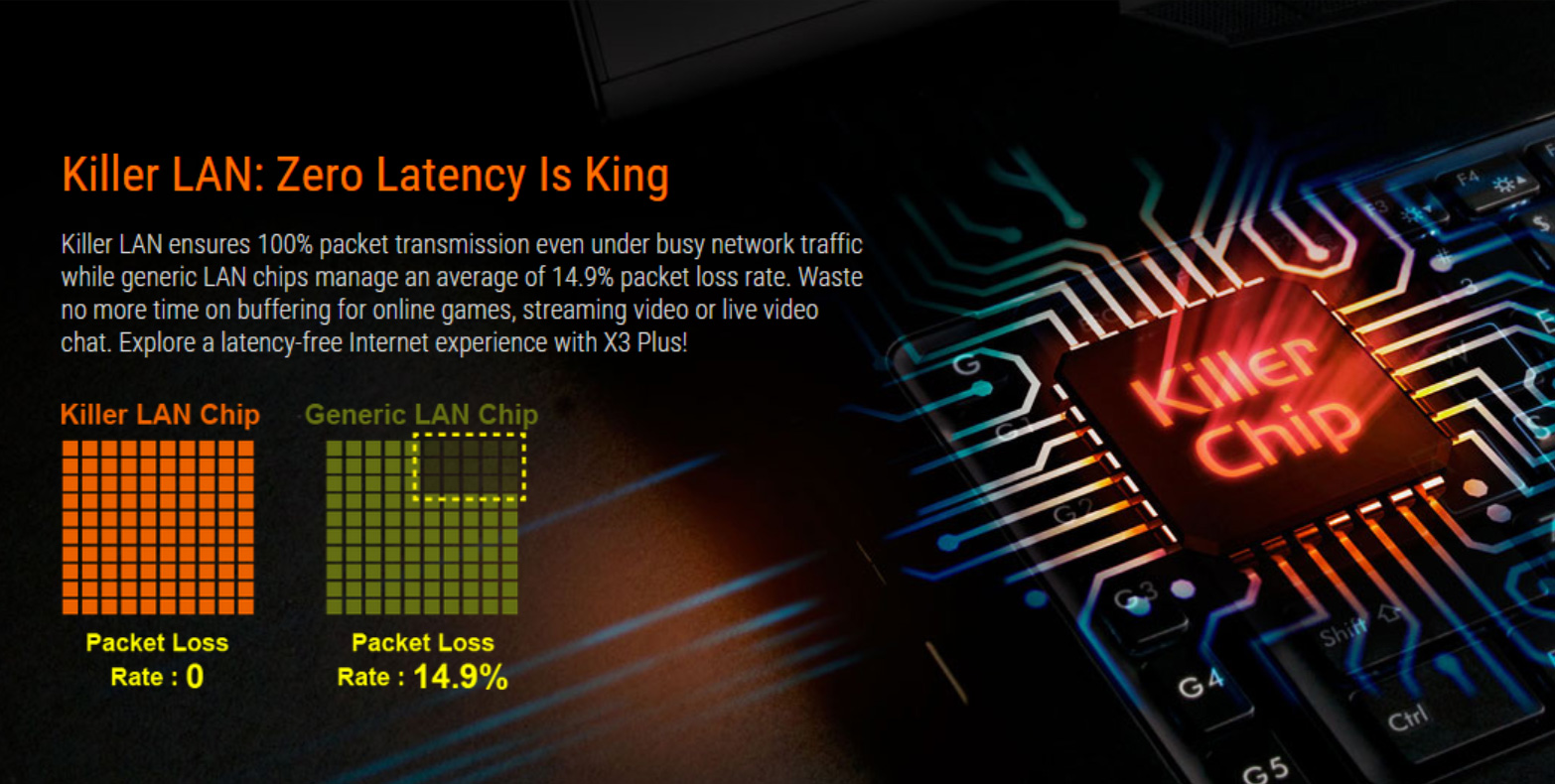 Of course, gaming laptops are not just dependent on raw performance. Thermal and noise considerations are also important, and here the X3 Plus v3’s dominance is less clear cut. The laptop does get fairly noisy when operating at full tilt – sometimes enough to demand either high volumes from the (weedy internal speakers) or noise-cancelling headphones. In addition, you will notice some heat during extended gaming sessions. However, neither issue is sufficient enough to cause concern, particularly as you’ll likely be using it on a well-ventilated desk with headphones anyway.

Like many gaming laptops, the X3 Plus v3 also makes a capable work laptop. The keyboard is surprisingly good, with sufficient key travel and a comfortable layout. I hit 90 words per minute on the typing speed test without any issues, right on my average. You don’t get a number pad though, so spreadsheet warriors may want to look for a larger machine (or plug in a USB number pad). The trackpad is good enough to get work done, although for Photoshop or other tasks you’ll likely want to plug in a mouse or tablet anyway. 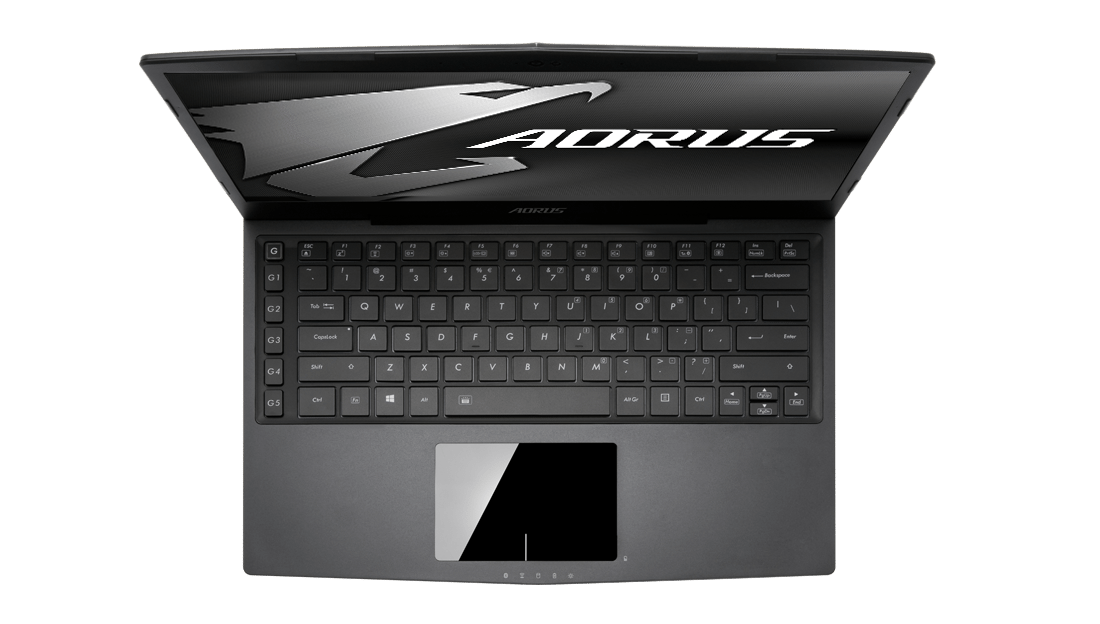 There is one issue with the trackpad, which I presume is an issue with this unit only: the trackpad buttons seem fairly stiff, requiring higher-than-average force to actuate. Many times I thought my internet was slow, but it turned out that the trackpad just hadn’t registered my button press. This is a non-issue if you use tap-to-click (or plug in a mouse), but it was a bit annoying for me and hopefully isn’t prevalent in other units.

Otherwise, the performance that makes for a strong gaming laptop also makes this a very over-powered work machine, capable of handling even complex tasks like rendering video, performing large Photoshop operations and accessing very large files. The SSDs in RAID0 ensure programs and files open rapidly too. Despite the high performance components, battery life was reasonable for a gaming laptop too, clocking in between four and five hours depending on your activities. 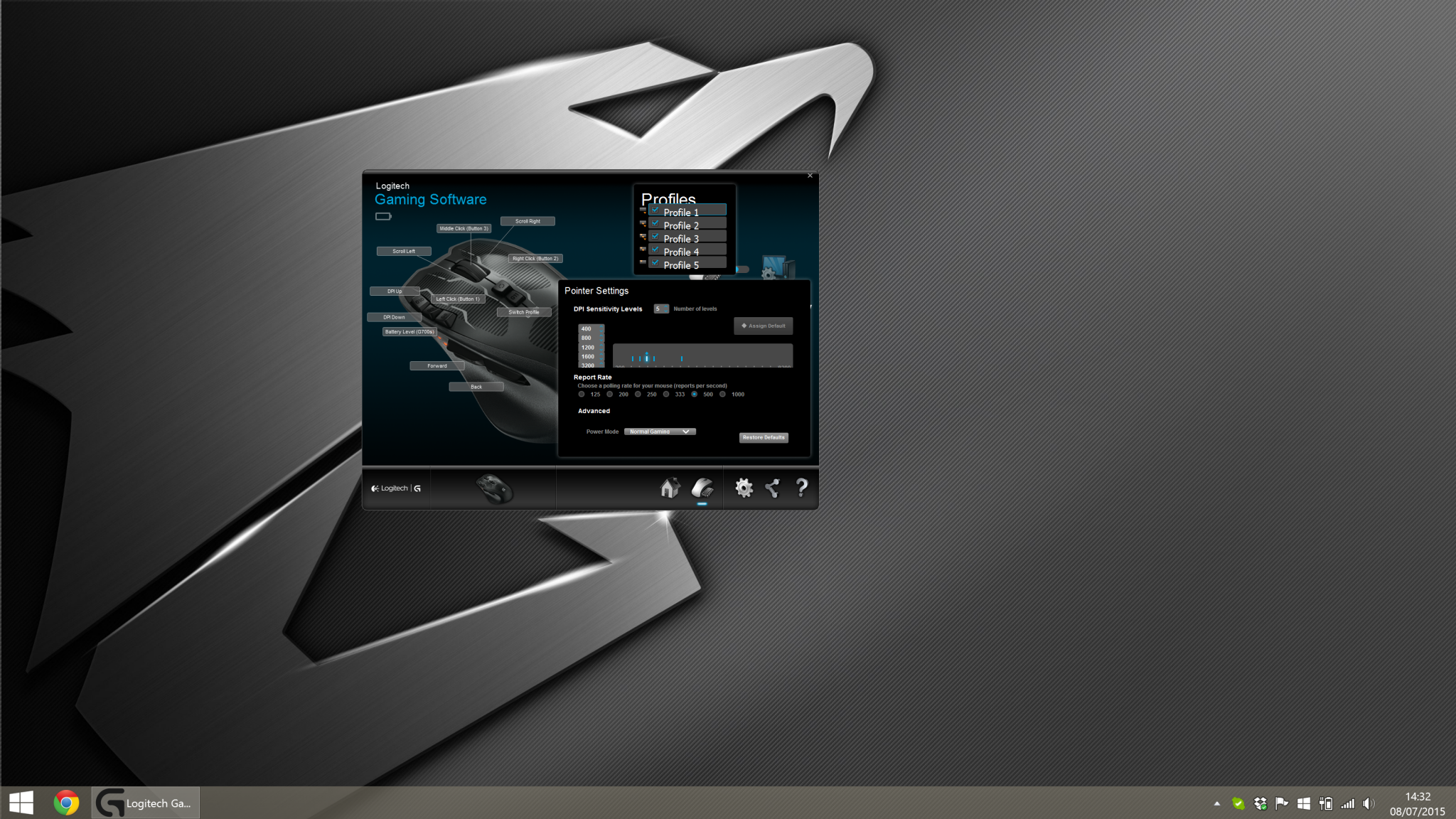 Above: a gaming app poorly optimised for 3K

Finally, the 3200 x 1800 display is great for surfing the web, reading and writing. Text is very sharp and high-resolution images look fantastic. There are still some scaling problems with some apps (e.g. Adobe’s Creative Cloud downloader), but overall the 3K display is very worthwhile. As well as being high resolution, the display also has good viewing angles and reasonably accurate colours, making it good for Photoshop and watching movies alike. The only issue with the display is its brightness, which even at maximum isn’t really enough to use in direct sunlight (so pick your train seats carefully!)

In these benchmarks, we’ll look to characterise the performance of the X3 Plus v3 compared to its predecessor and other top gaming laptops. Let’s get started.

3DMark is a comprehensive benchmark, designed to offer a good simulation of an intensive 3D game. The most challenging standard benchmark, Fire Strike, is a good test of modern gaming laptops and PCs. As you can see in the chart below, the X3 Plus v3 manages a strong score of 6674, nearly the same as the GTX 980M-equipped P505 but still a bit behind the incredible P37X.

Cinebench is a fairly standard benchmark, designed to test both graphics and processor in different tests. Looking at the OpenGL test first, we can see the X3 Plus comfortably in the middle of the pack with a score of 101.59; a little behind the original X3. This is largely down to the slower processor used in our v3 review unit. The CPU test goes differently, with the v3 putting together an impressive top 3 result somehow. 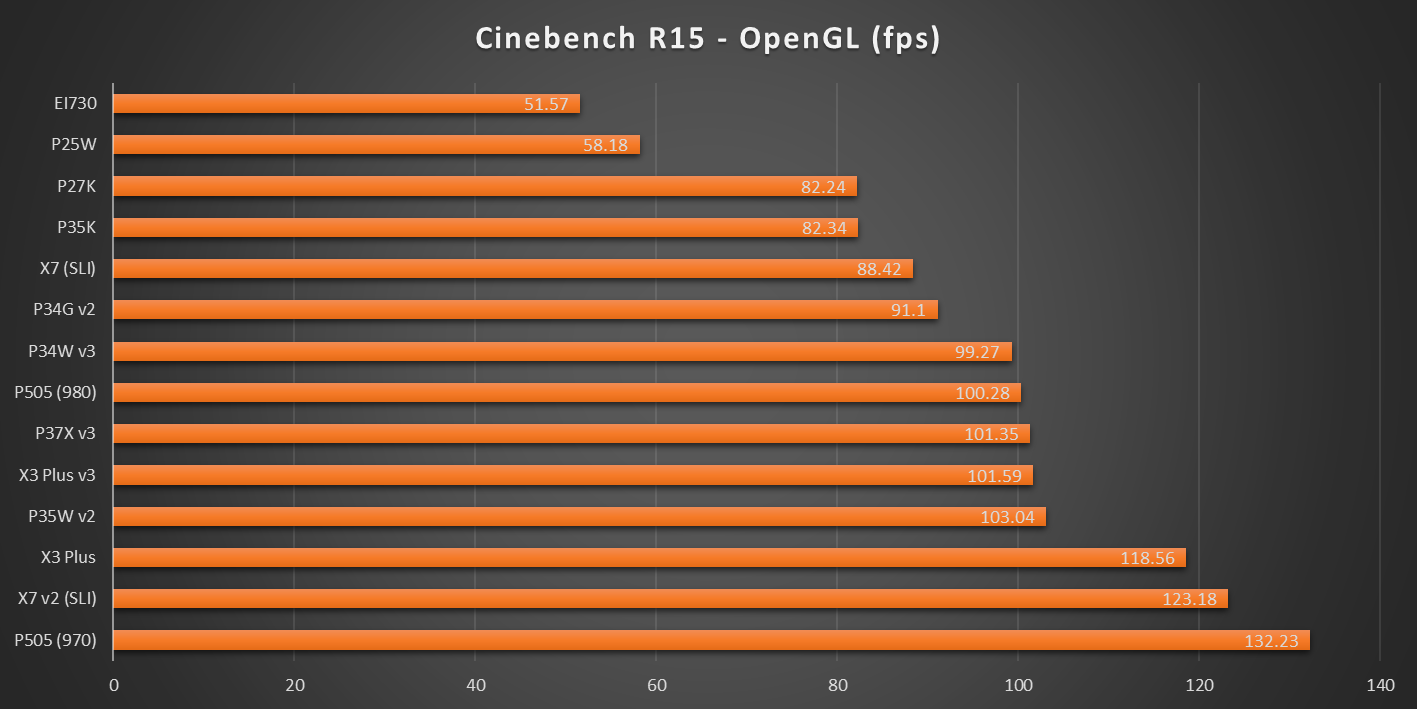 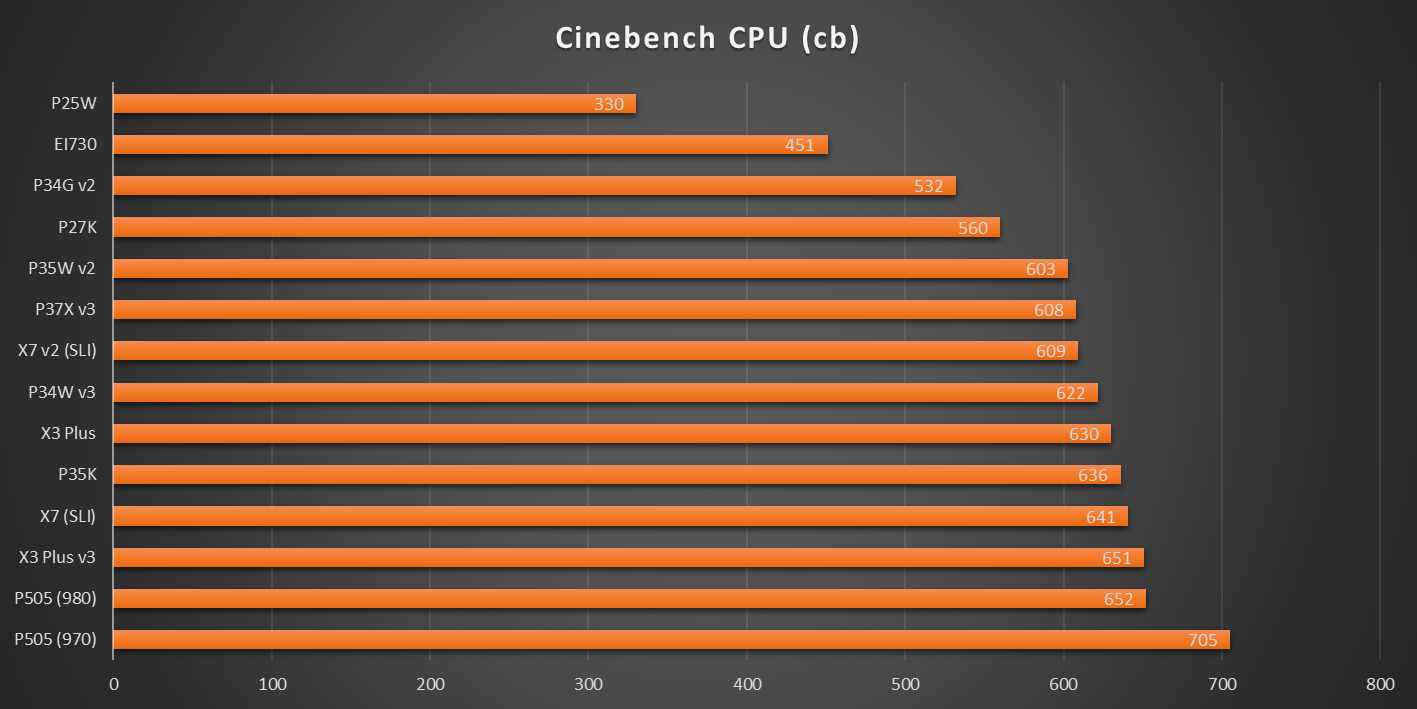 GeekBench is a processor and memory test, which uses a workload of common computing tasks. The v3 scores highly in the multi-core test with a score of 12438, coming in third place behind the P505 and the original X3 Plus. 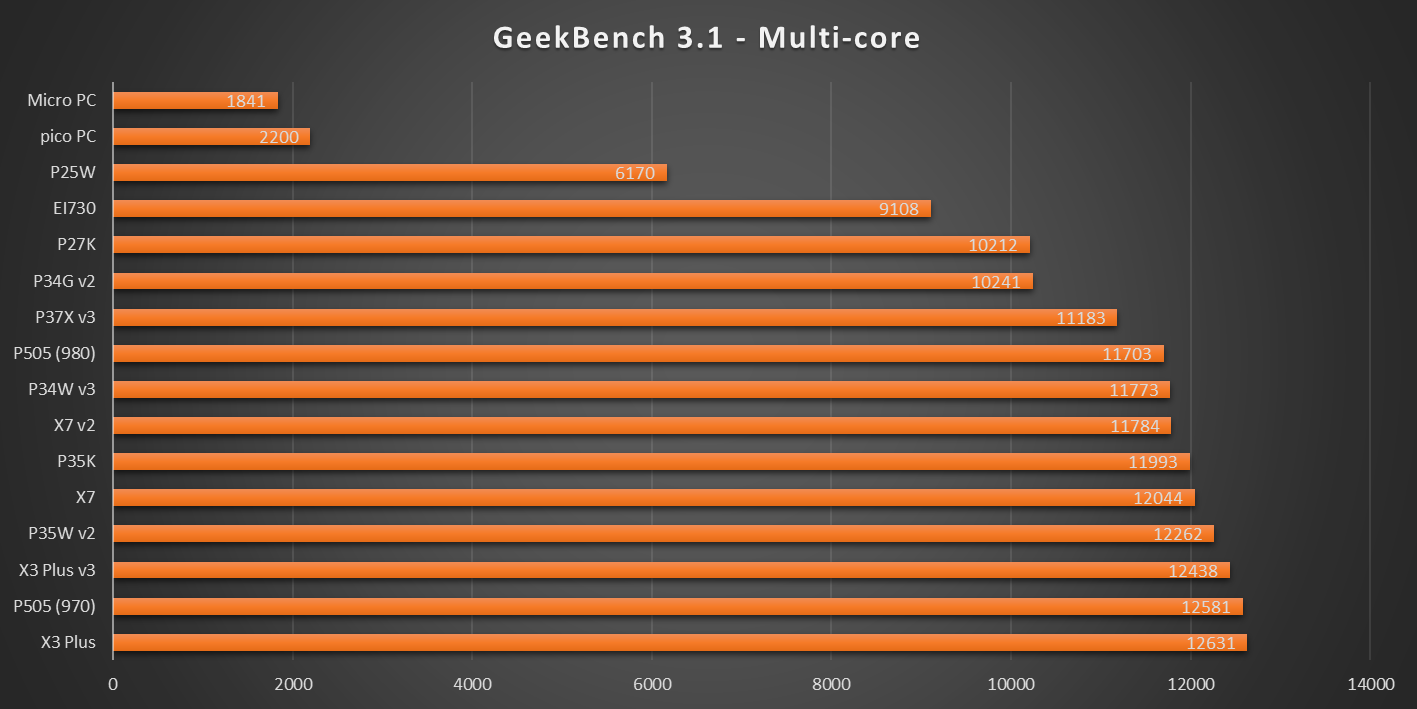 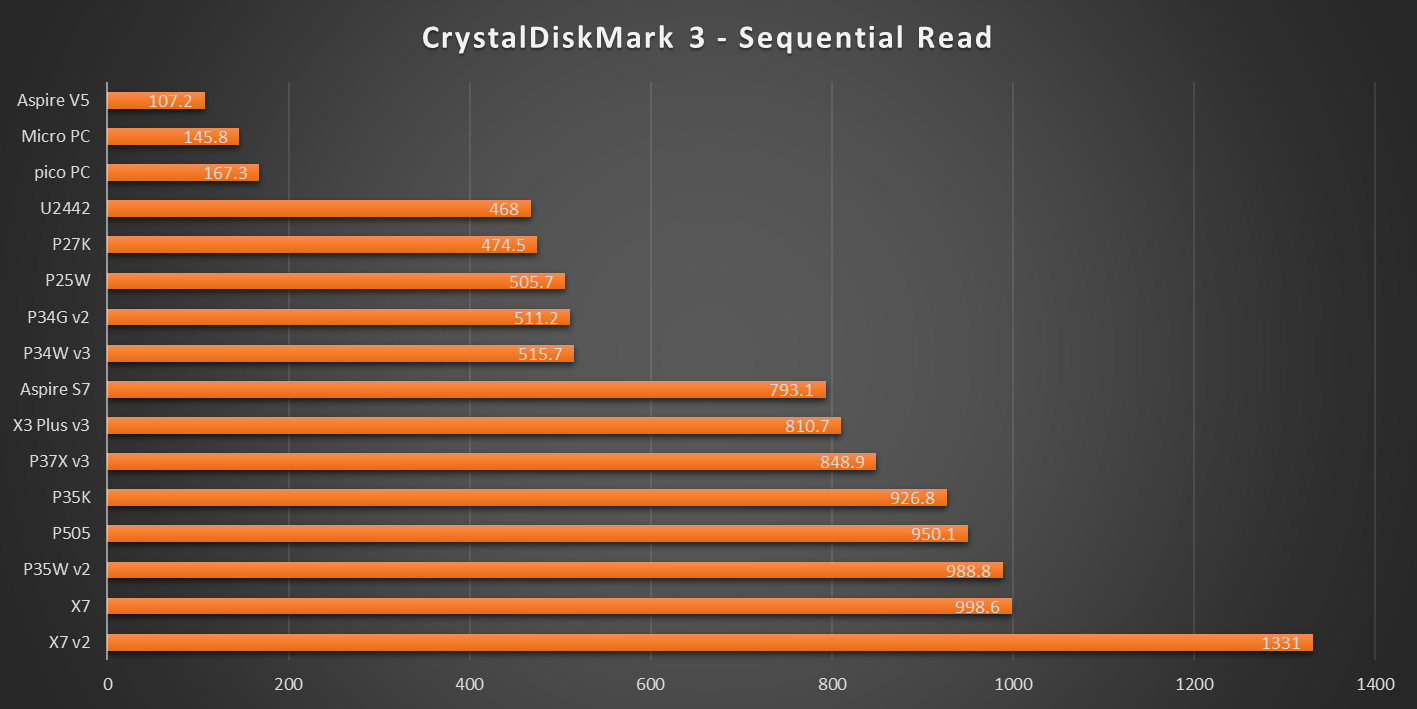 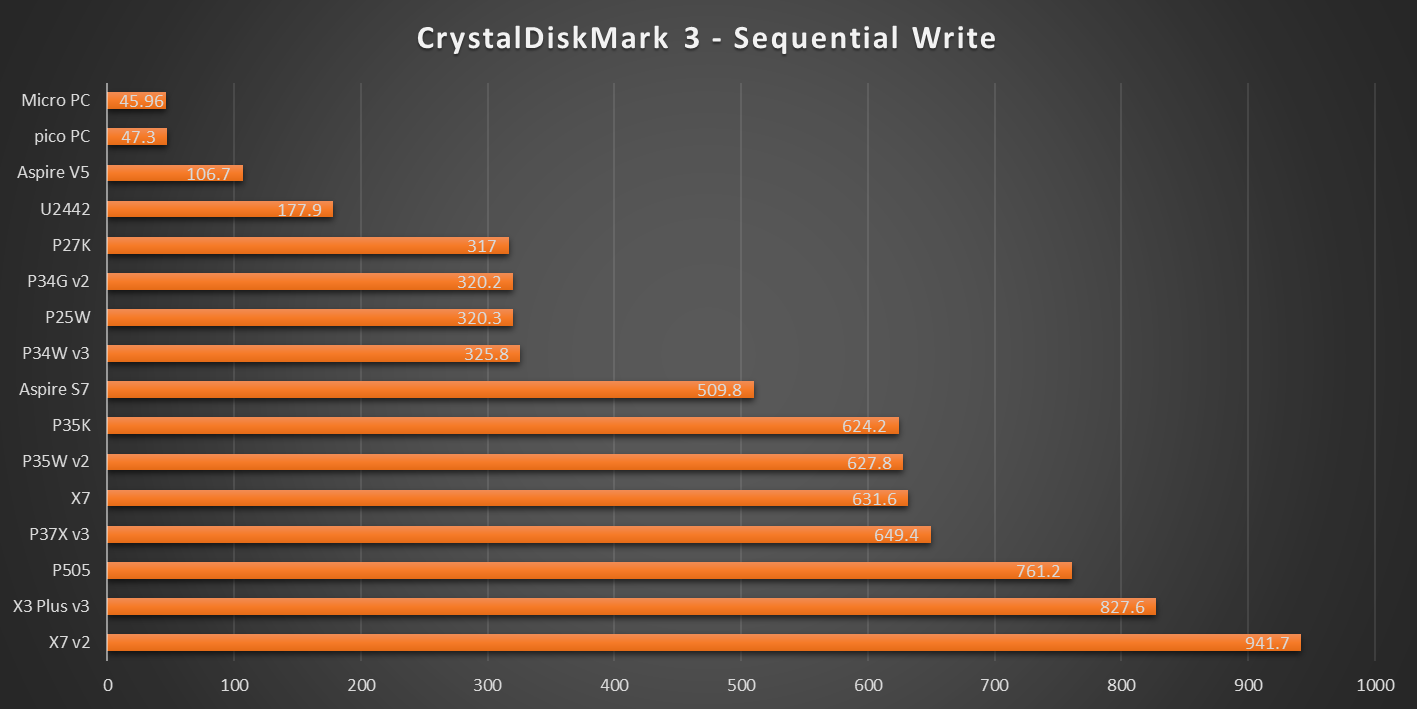 Now we move onto benchmarks of actual games, designed to offer a good insight into how this laptop performs in real-world situations.

Metro is an intense game for both you and your computer, and the X3 Plus v3 puts in a reasonable showing at 1080p and high settings, with AF 4x filtering, normal motion blur and no SSAA, DirectX 11 tessellation or advanced PhysX. The v3 scores 46 fps, which is quite playable but a little below what we saw from larger laptops of the same generation like the P505, P37X v3 and X7 v2.

BioShock Infinite uses the Unreal Engine, a common engine used in many titles. As such, it’s a good test of performance for these games, and the v3 looks good here. It gets a result that equals that of the P34W v3 and P505, a comfortable 115 fps. 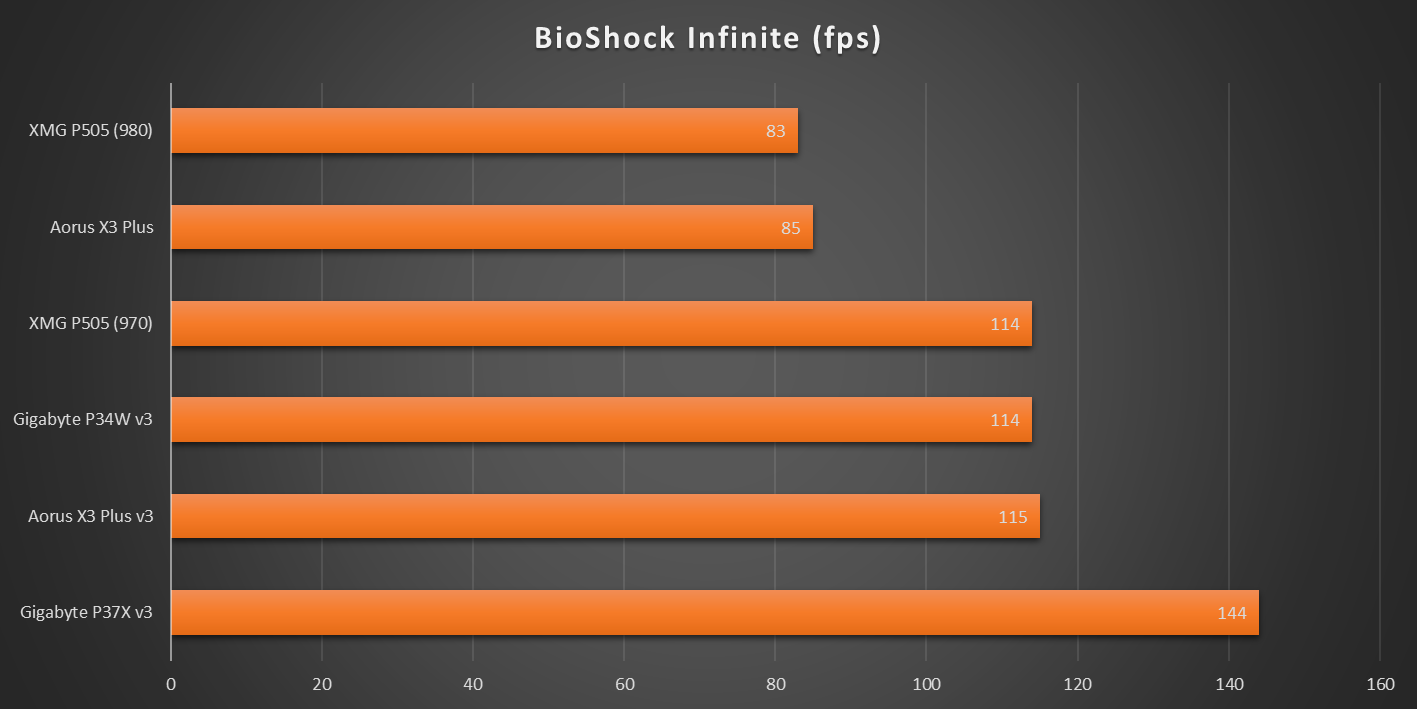 CoH 2 is another intensive game from the past few years, and it (almost uniquely) does not support Crossfire / SLI so dual-GPU laptops don’t run away with the show. Here the X3 Plus v3 and its single GTX 970 scores highly, with a perfectly playable 60 fps. 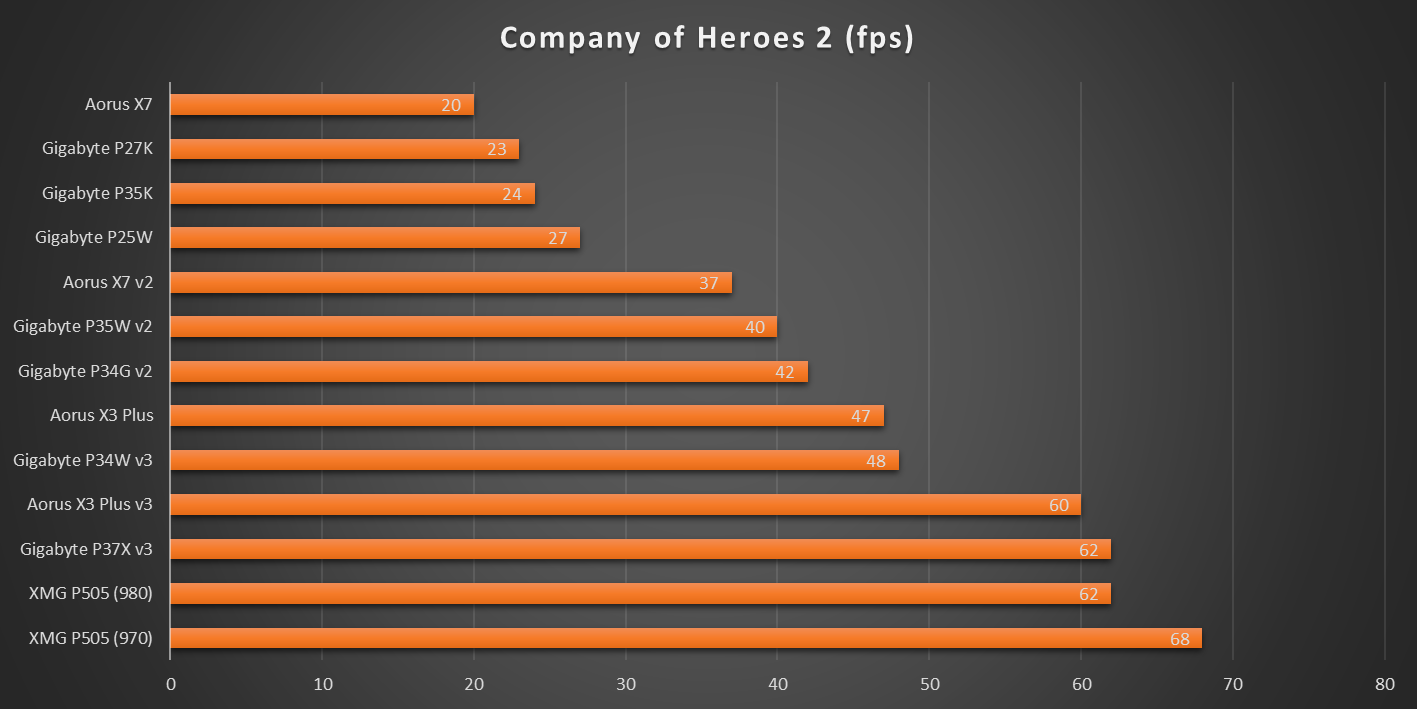 Our latest game benchmark is Total War: Rome 2 using 1080p resolution and Ultra settings. The v3 gets a solid 72.2 frames per second in the demanding benchmark, suggesting that the game could be playable at 3K resolutions too. 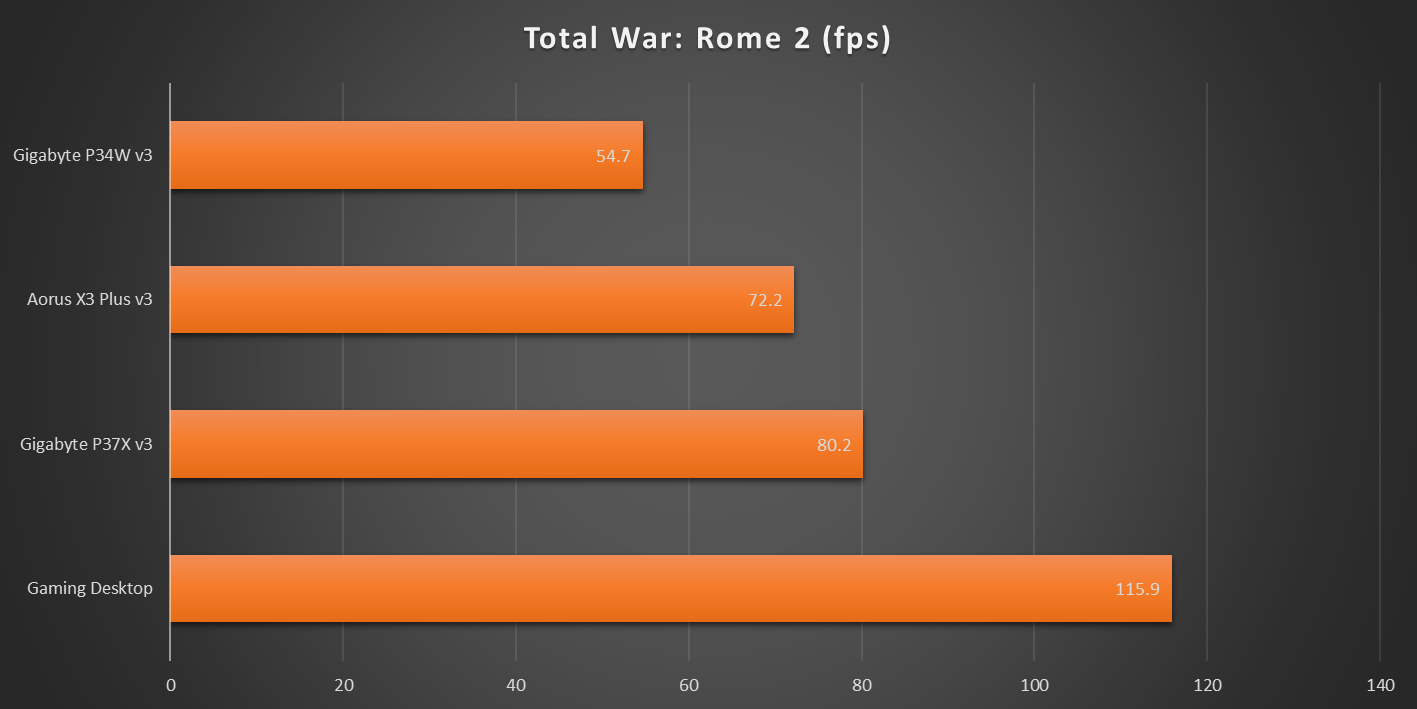 The Aorus X3 Plus v3 continues the legacy of its predecessors, providing absolutely insane performance in a very portable package. Aside from raw horsepower, the X3 Plus v3 also benefits from a solid keyboard, beautiful display and an impressive design that straddles the line between gamer and professional. While the laptop is top-notch, there’s still room for more substantive changes – the trackpad, hinge and thermal performance could all benefit from improvement. Hopefully we’ll see Aorus take these steps in later editions of the X3.

Smartphones and tablets are brilliant, but they’re always limited by one thing: power. No matter how...

The Predator XB270H is one of Acer’s first gaming monitors to support G-Sync, a new Nvidia initiative...