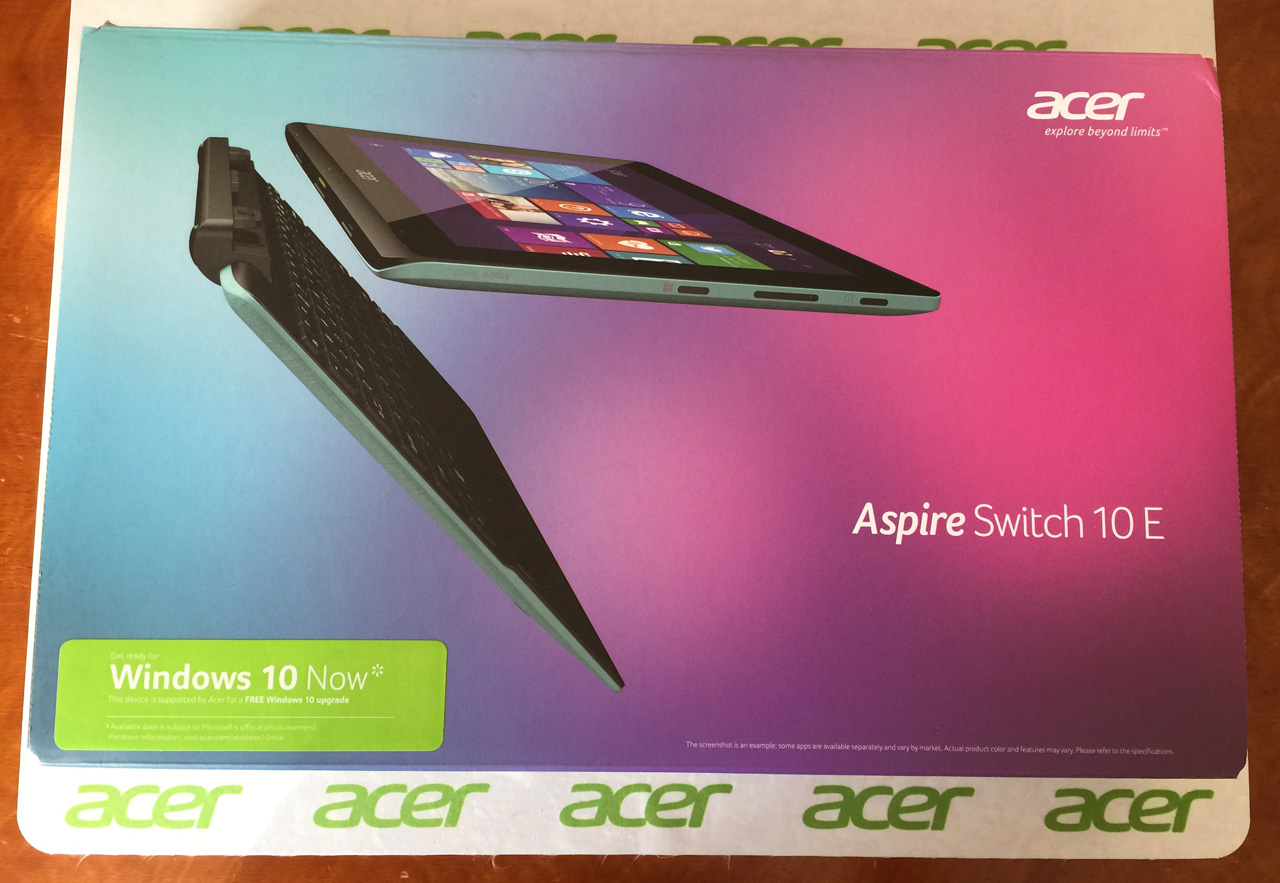 This weekend we took to the streets of Dublin to try out the latest gadgets from Acer in the #AcerLiveBlog challenge. First we reviewed their Iconia One 8 tablet, and now we’re looking at the Aspire Switch 10 E convertible in part two. Let’s get right into it!

The 10E comes in a cheerful, colourful box showing the convertible itself. On the back we have its specifications, reprinted here for your benefit: 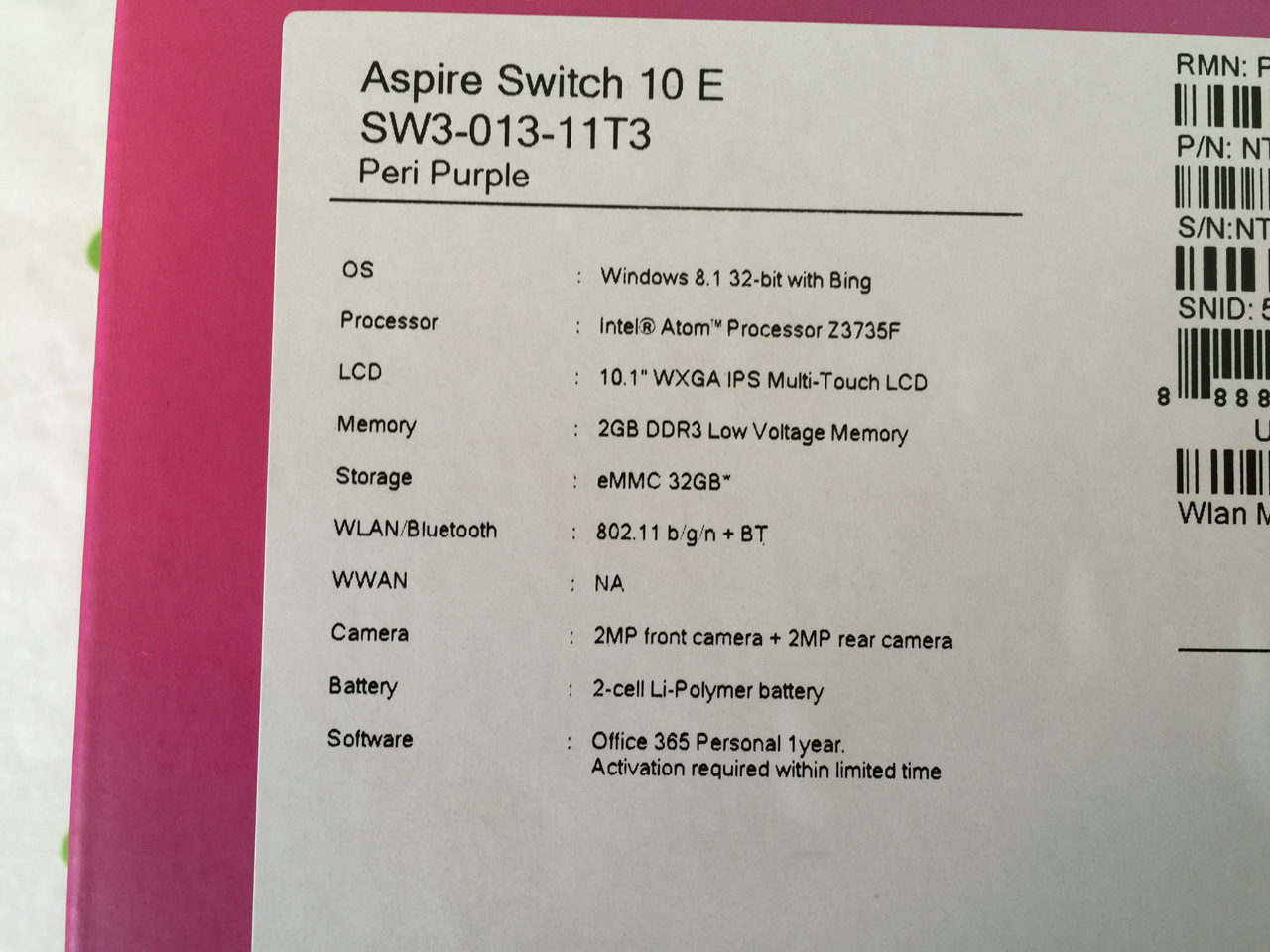 The Switch 10 E is a convertible with four modes of operation – laptop, tablet, display and tent. Laptop is the standard screen-above-keyboard configuration, and the keyboard here is quite reasonable. The layout is a little cramped (as is almost unavoidable with a 10-inch display) but the keys have reasonable travel and work quite well for typing up short emails or longer documents. The touchpad also does the job without complaint, although edge gestures were a little tricky to activate. 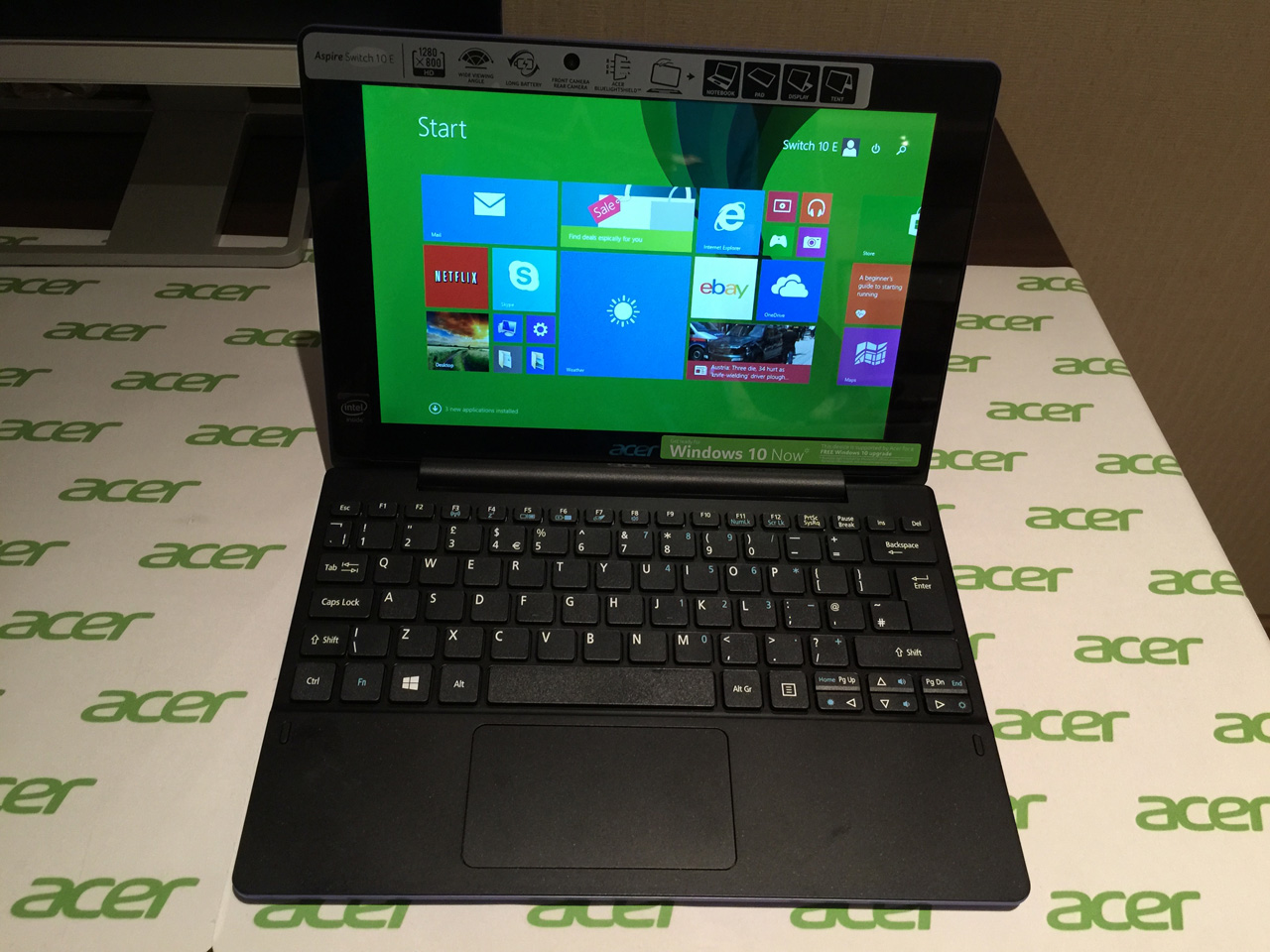 The tablet mode is again quite traditional, and works well enough. Windows 8.1 doesn’t have a massive number of apps compared to Android or iOS, but there’s enough to cover the basics. One benefit of the fairly low 1280 x 800 resolution is that touch targets are nice and big, without the need for Windows’ fairly rubbish scaling. 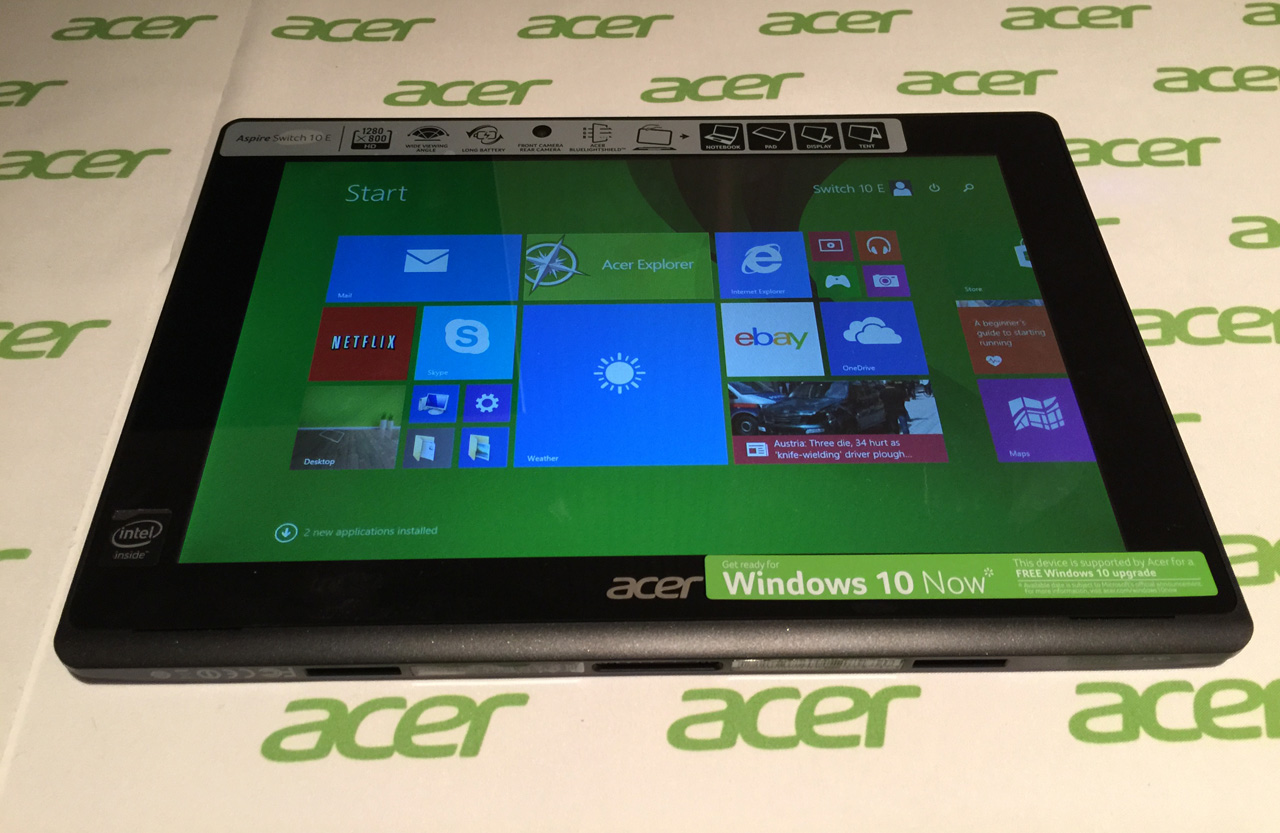 Display is where you take off the screen and replace it backwards, letting you share a movie amongst friends or hold a small meeting. It’s probably the least useful of the available modes, but it’s an obvious inclusion and still will find some niche uses. 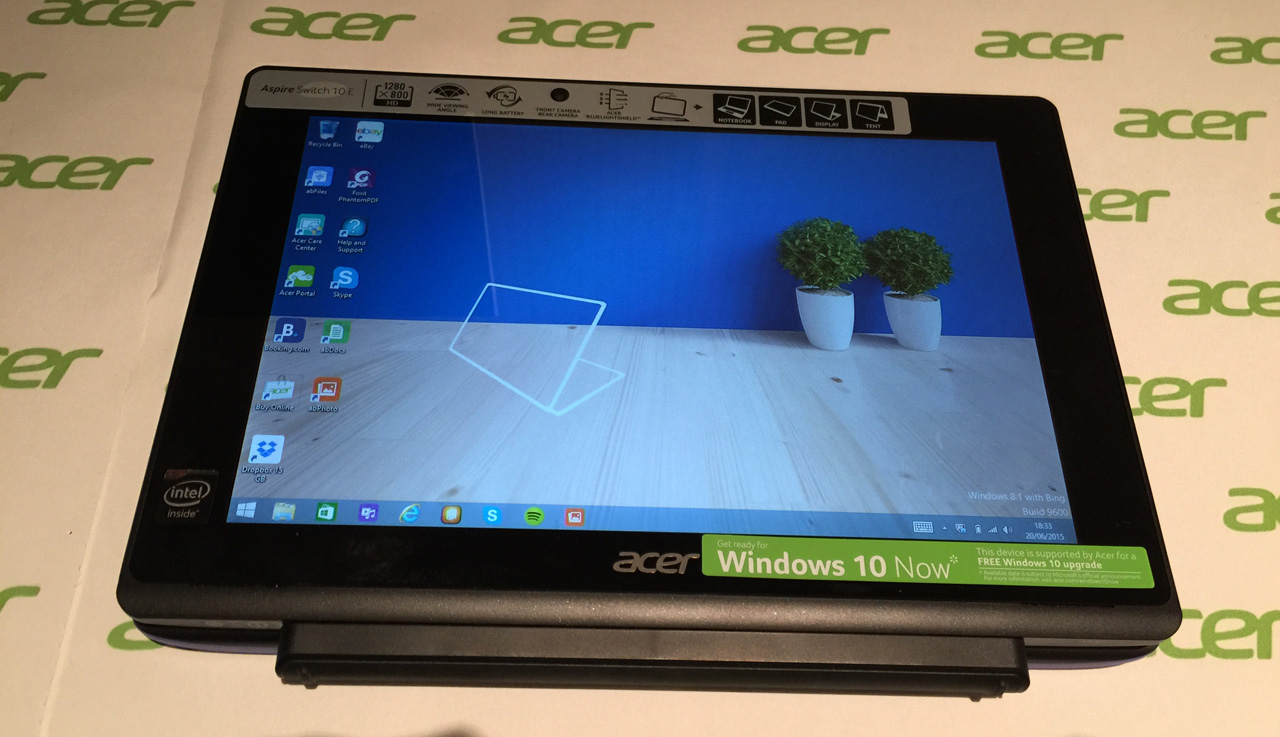 Tent, the final mode, is bending the unit into an upturned V, perfect for watching a film or what-have-you on the small tray table of an airplane or train. Remember to take off the awful stickers above and below the display. 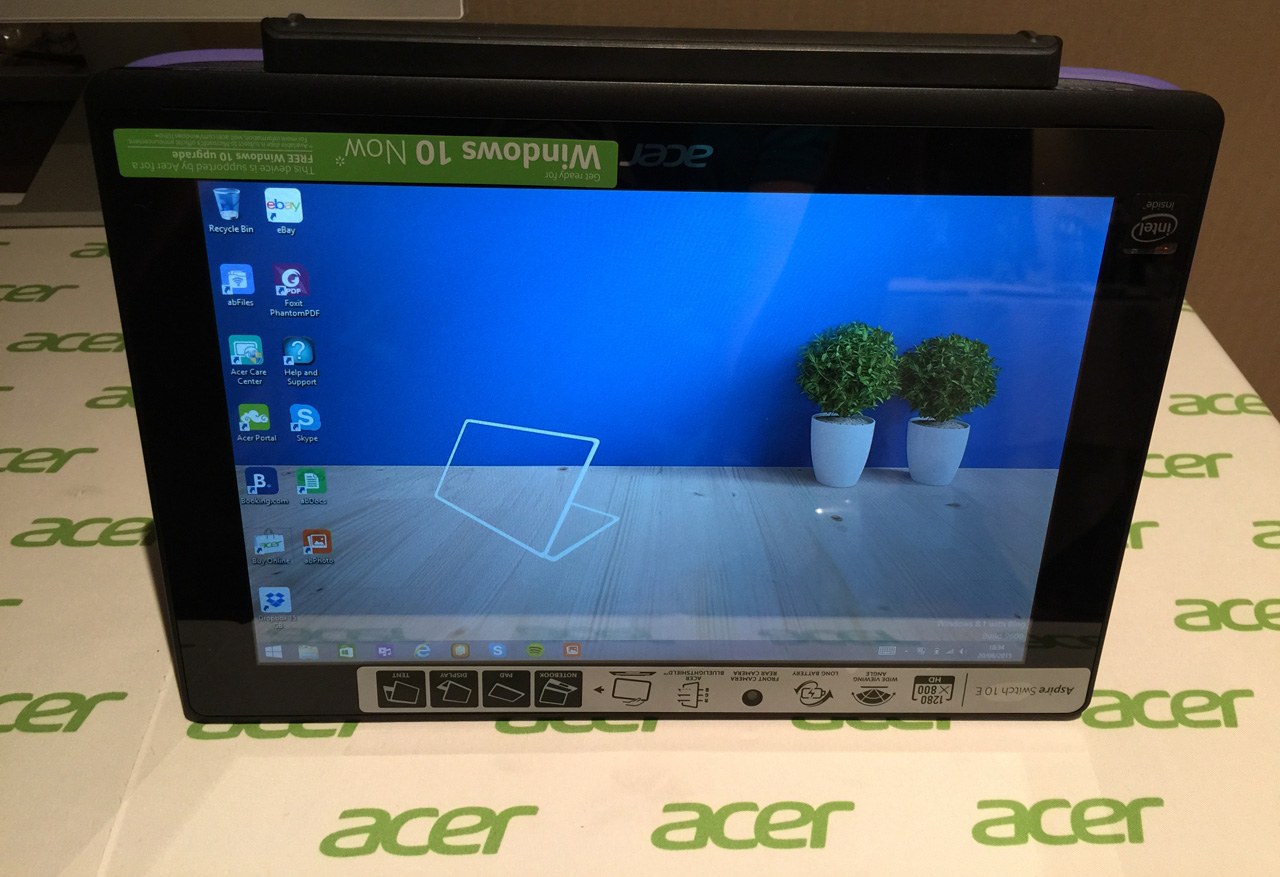 One thing you notice immediately about the Switch 10 E is its colour. Our unit came in a friendly Peri Purple colour scheme, but magenta, teal and three other colours are also available. The case feels fairly tough, and it easily grippable thanks to the subtle texture it possesses. This being said, the plastic construction pales in comparison to tougher metallic and polycarbonate finishes you’d expect on higher-end machines.

There are a decent selection of ports here – on one side we have micro USB charging, HDMI out, microphone and the micro SD card slot… 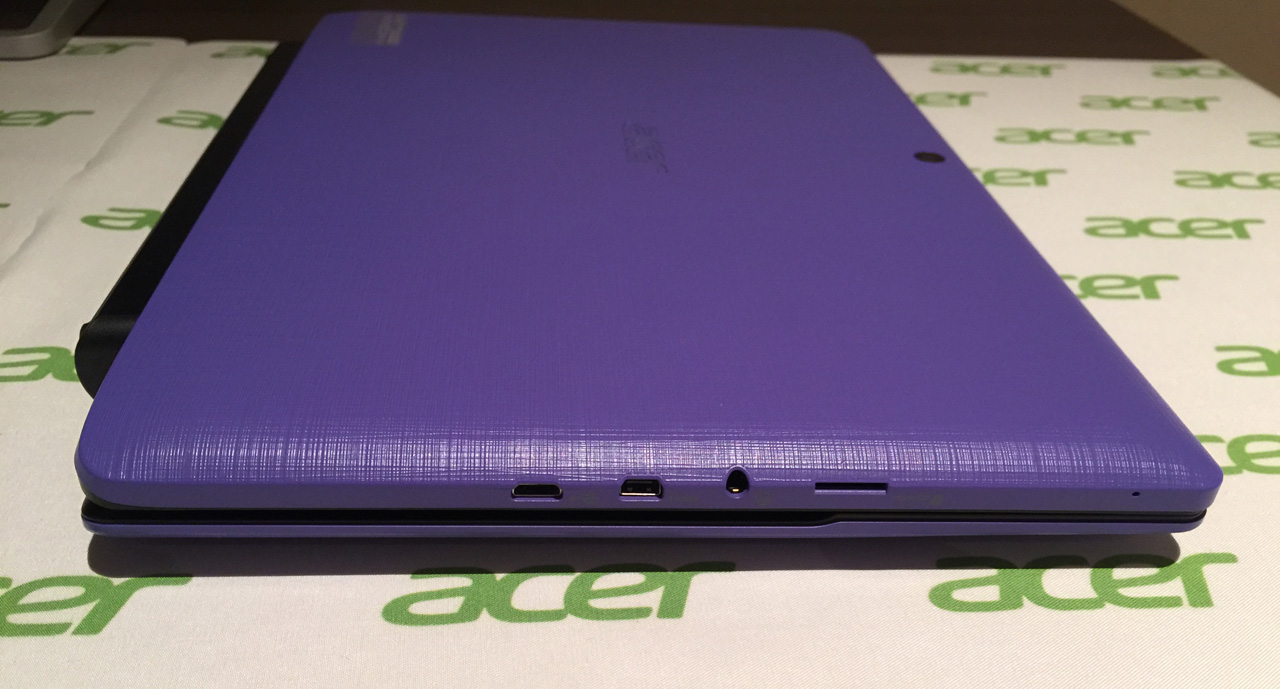 …while on the opposing side we have a series of buttons and a full-size USB port. It would be nice to see additional USB ports, particularly on the tablet half of the device. 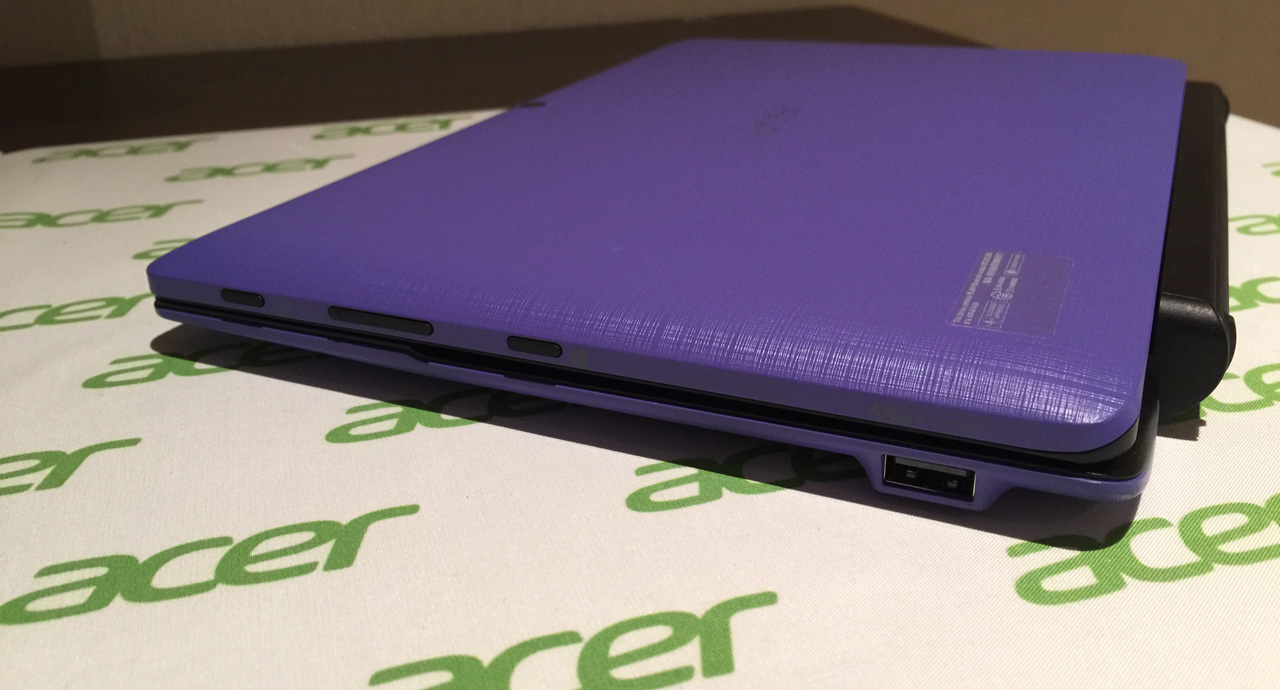 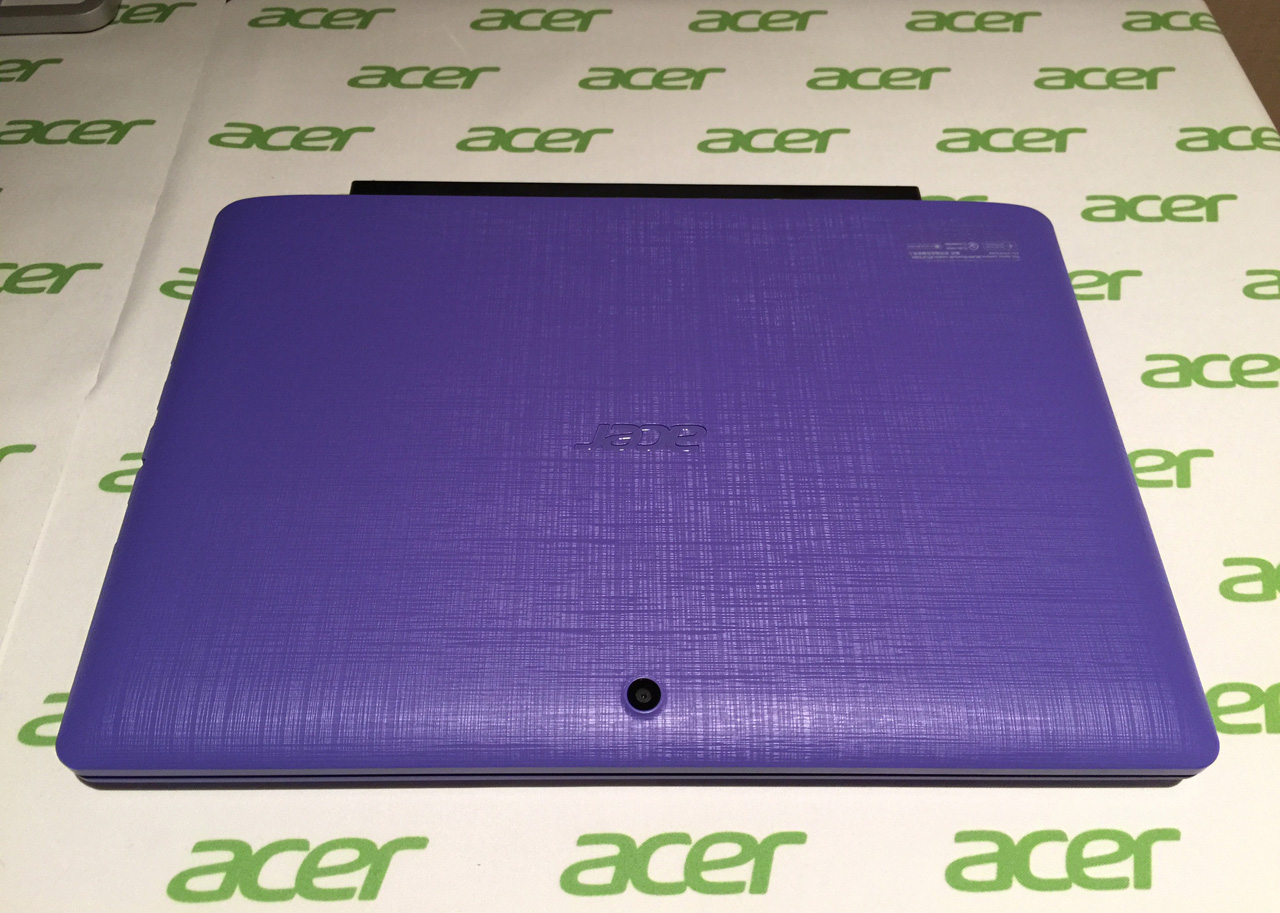 …while the bottom holds nothing more than screws to take it all apart, the all-important hinge and some regulatory information. Of course, there’s nothing much inside here apart from a battery, as all of the clever parts are necessarily in the tablet half of the machine. 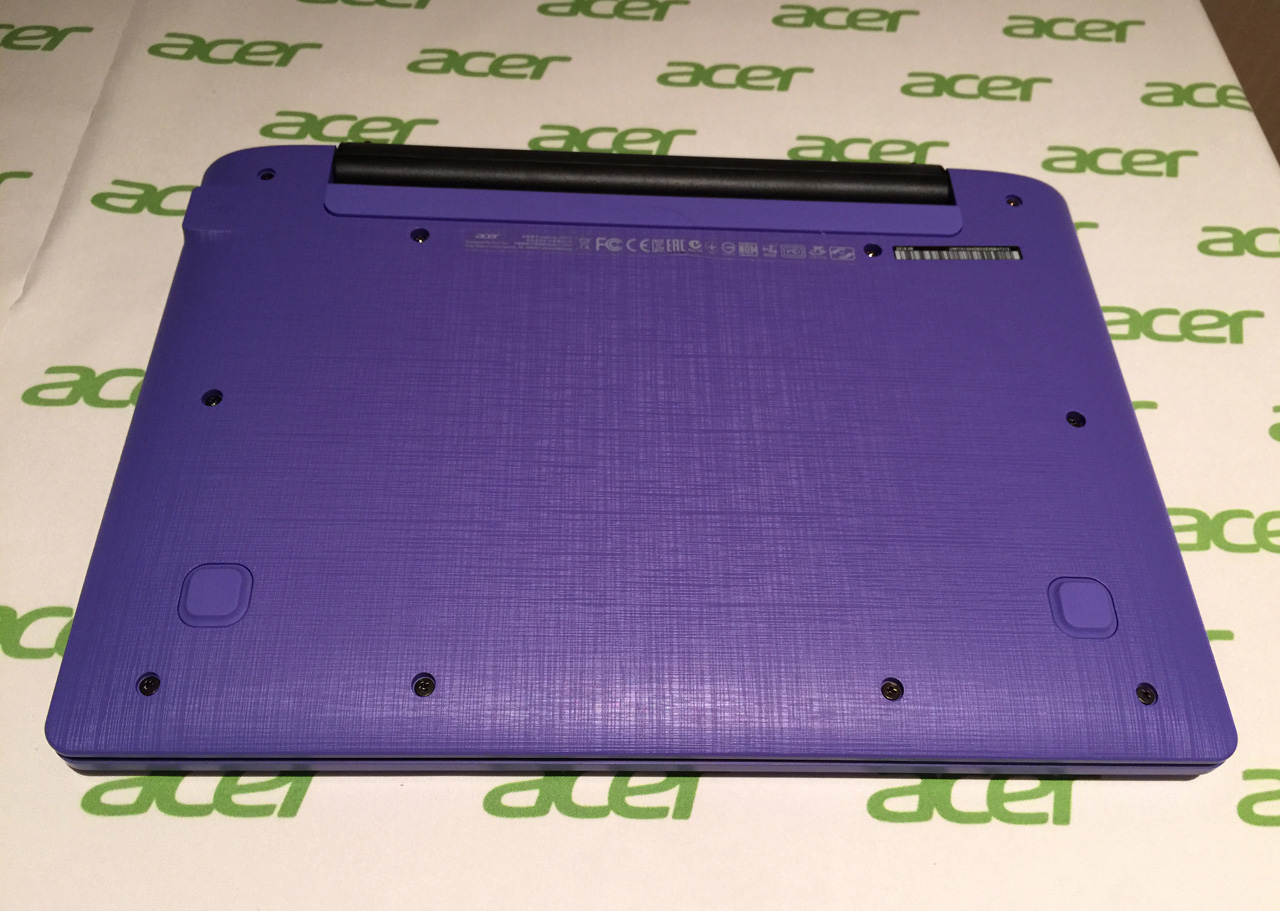 The Switch 10 E comes with Windows 8.1, but as Acer helpfully note on the box it’ll be eligible for an upgrade of Windows 10 once it’s released later this summer. While Acer have included their usual loadout of (generally crap) software, this can soon be uninstalled if you would prefer not to see it. They’ve also included something genuinely useful – an Office 365 subscription, allowing full access to the latest version of Microsoft Office for a year; good value.

The Switch 10 E is an interesting device. As a convertible, it works well –  each mode has some use, and the hinge seems sturdy and durable. I never felt that the display was wobbling, and it always pulled apart and reattached with a confident snap.

The 10 E was claimed to come with 12 hours of battery life, and although I didn’t get to use the device uninterrupted for that long, it did seem to be a reasonable estimate. One nice feature is that the 10 E charges via micro USB, so you can (likely) use the same charger you use for your Android phone, tablet or power bank, rather than needing to bring a new one. That’s great, as it means less space required in your bag if you want to take the Switch 10 E along.

While the 10 E is colourful and its four modes work well, it’s not truly outstanding in any regard. With more stylish and more powerful machines available at a similar price point, there’s little to really set it apart from the crowd. Consider the Switch 10 E if you can find it at a good price, but this convertible doesn’t do enough to justify a place at the top of your list.

n.b. This is a capsule review, based on two days spent with the Switch 10 E on an Acer-sponsored press trip to Dublin, Ireland. Photos were taken with an iPhone 6 Plus in less than ideal lighting conditions, so please excuse any lapses in quality.