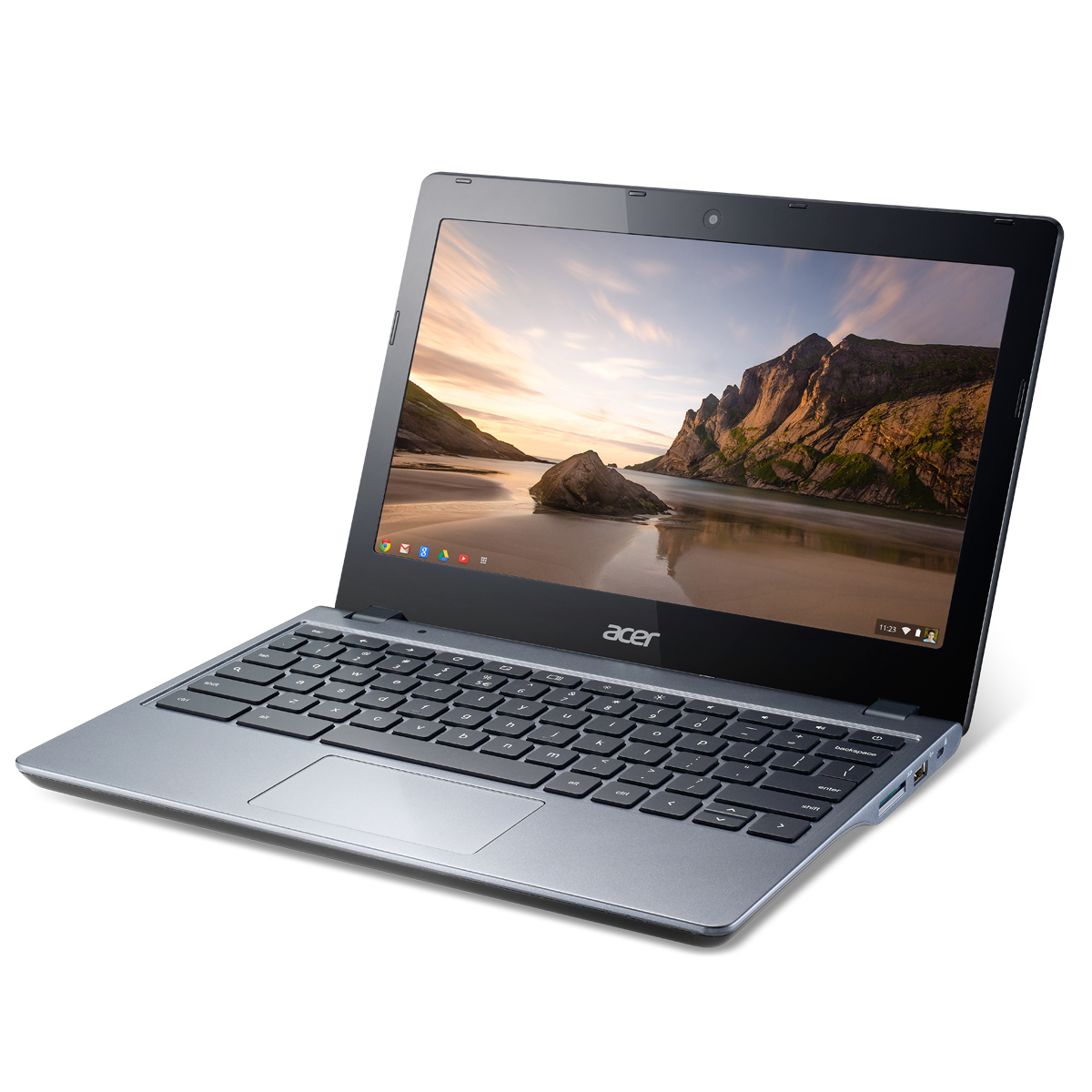 Today we’re reviewing something rather different than our normal range of gaming laptops: the Acer C720, the latest Chromebook.

This 11″ laptop runs Chrome OS, essentially the Google Chrome web browser extended into a full operating system. It doesn’t run PC games or apps like Photoshop, but it works great for checking your email, streaming videos and just generally messing about online. And because you’re skipping Microsoft’s expensive Windows license and Apple’s expensive Mac hardware, you’ll get a capable machine for the fraction of the cost of a traditional laptop. In the case of the C720, that’s a hair under £200.

The Acer C720 is a tantalising prospect, so let’s take a closer look at what you get for the money.

The Acer C720 is slim, understated laptop measuring about two smartphones thick. Its plastic construction feels solid enough in the hand; you have to really try to flex it significantly. The laptop isn’t going to win any design awards, but it looks suitably modern without being over the top.

The laptop lid is pleasantly minimal, with the Chrome name and logo sitting atop the Acer one on the left hand side–the lid is otherwise unadorned. 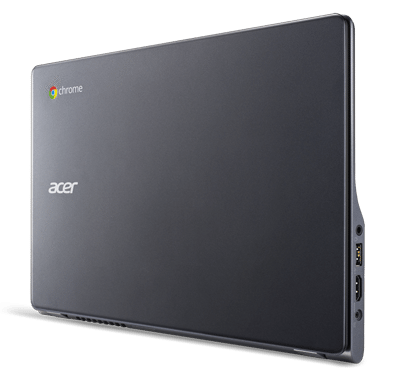 Opening it up, we see black island-style keys placed on a grey plastic body. The spacing of these keys is similar to Apple’s MacBook, with a few interesting layout changes.

The first is that you’ll find two wide Ctrl and Alt keys in the lower left hand corner; there’s no Special/Windows key to be found. The second big change that you’ll either love or hate is that there is no caps lock; instead that key has been replaced with a search key that allows you to launch programs without using the mouse. 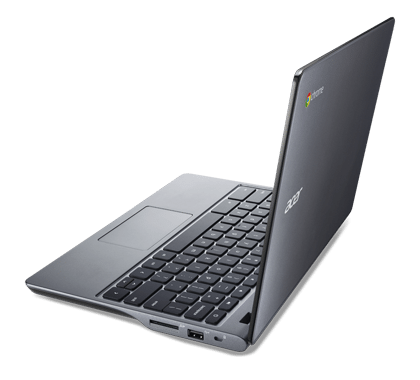 The half-height top row has also seen some changes, with the usual Function keys replaced with dedicated Chrome OS buttons for going back and forward, refreshing, adjusting window sizes, brightness, volume and power. The keys provide a decent amount of travel, but not quite as much as a MBP.

Below the keyboard is a generously sized trackpad, which supports a nice range of gestures. You can use two finger scrolling, pinch-to-zoom, and other industry standards. The touchpad responds well and accurately to inputs, and is one of the nicer non-Apple touchpad units that I’ve used.

Above the keyboard we have the 11.6″ display. The 1366 x 768 resolution is adequate for a single full-screen window, but does preclude you from having most webpages up side-by-side. Viewing angles and colour reproduction aren’t brilliant here either. 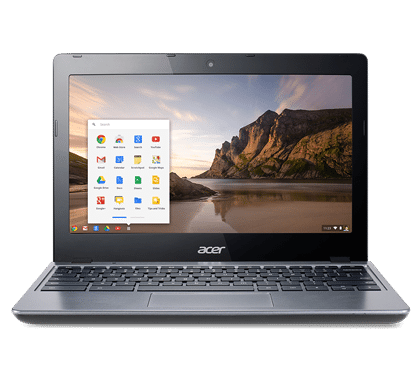 On the left hand side we have four ports. From front to back, these are a 3.5 mm headset jack, a USB 3.0 port, a full-size HDMI port and the small AC input.

On the right side, we have the remaining ports. Again from front to back, there’s an SD card slot, a USB 2.0 port and a Kensington lock thingie.

On the bottom of the C720, we have a simple identifying sticker in the centre, with a wide exhaust grille running along the top. The bottom left and right corners feature speakers, which are decently loud for facing downward.

Overall, it’s a well equipped machine for the price point, with all of the essentials and almost nothing extra.

In order to give the Acer C720 a fair shake, we’ll be using it as our go-to travel laptop for about two weeks’ time. We’ll be looking to see how capable Chrome OS is as an operating system, and whether there are any common tasks that we just can’t do on the OS. We’ll also be evaluating the C720’s hardware, to see how well it fulfils that ideal of a super portable, long-lasting laptop.

The classic concern when it comes to alternative operating systems is twofold: will it run my apps? Will it be easy to use? 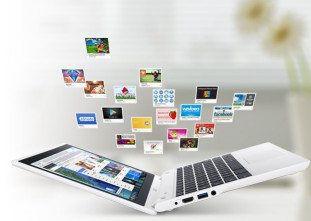 On the first point, the answer is… it depends. As Chrome OS is basically just Chrome, any website, web app or extension that you’ve used in Chrome will work just fine here – from Google services like Gmail, Docs and Calendar, to third-party apps and games like Angry Birds and Cut The Rope.

For desktop apps, things are a little more complicated – your Windows or Mac apps certainly will not work here, but chances are good that there will be a web app that does the same thing, whether it’s one made by the same folks as the desktop app (e.g. Evernote and Evernote Web) or not (e.g. Photoshop and Pixlr).

The only missing piece I could find was Skype – the service, owned by Google’s rival Microsoft, isn’t available as a Chrome app and can only be accessed indirectly through Outlook.com. Otherwise, there was always an app to do the job that I needed, from writing, modifying photos, playing music and streaming videos. Almost every file type (MP3s, MKVs, PDFs) will open in Chrome, and weirder file formats can be converted online. 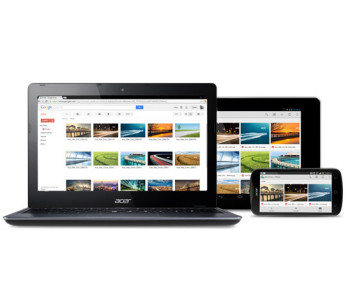 I am personally quite invested in the Google ecosystem (I own Android phone and tablets, and use Google services for email, documents, calendars, etc.) so things were very straightforward – I signed into the Chromebook with my Google account and password, and within 30 seconds all of my bookmarks, passwords and extensions had synced onto the Chromebook. It was a markedly different experience to installing Windows, Mac or Linux onto a new machine and then spending hours or days getting things set up properly.

The second point is easier to tackle: Yes, Chrome OS is easy to use. If you have used Chrome on Windows, Mac, Linux or Android then you will be quite familiar with how things work. Almost everything exists inside of the Chrome browser; even system settings are found in the traditional Chrome settings menu. The few wrinkles – pinning apps, changing your desktop wallpaper, connecting peripherals – are easily explained.

I’d feel quite confident giving a Chromebook to a family member, even as a first laptop or if they had only used Windows or Mac previously. After the initial “Where are my apps!?” confusion, there’s not much left to explain. Things either “just work” or aren’t possible; there’s no awkward middle ground so common to other desktop operating systems (“it’s possible, but it’ll take a bit of doing… actually, just give it here…”)

As Chrome OS is built on the Linux kernel, malware and viruses are essentially absent. That invulnerability makes post-purchase support much easier, too – an important consideration for any family’s designated nerd.

So if you’re considering a Chromebook, then try this simple test: Try to go a whole day without launching an app on your PC other than Chrome. If you can do it without issues, then you’ll be fine with Chrome OS.

The Acer C720 is a surprisingly capable piece of hardware. As we mentioned in the physical features section, the keyboard lacks travel but is otherwise sensibly arranged and works well for typing even long documents and plenty of emails. The touchpad seems reliable and has all of the multi-touch gestures you’d expect. The display lets down the side somewhat, with the 1366 x 768 resolution making it near-impossible to have two windows open side-by-side.

In terms of connectivity, the C720 covers the essentials. You’ve got space for two USB devices (e.g. keyboard and mouse), there’s an SD card slot, outputs for HDMI video and headset audio. Wireless standards are a bit behind the times, but perfectly functional – Wireless 802.11 b/g/n and Bluetooth 4.0. Basic devices like mice, keyboards, printers and USB drives work without issue, although anything that requires specialised software on Windows or Mac won’t work here. 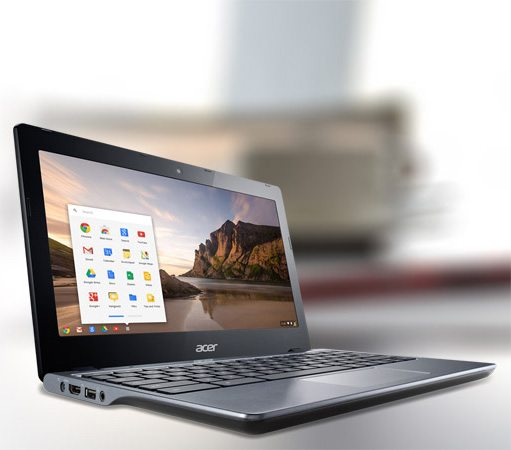 The same latest-generation Celeron processor that makes the C720 capable of handling multiple tabs of media-rich websites or web apps also sips power, allowing the machine to last a long time between charges. Eight and a half hours is the stated runtime, and I’d say that’s indeed accurate. It’s an impressive figure; an entire typical workday. That means you can use the C720 as your primary machine all day, or you can keep it as your secondary machine (the same role as a tablet), using it in your house whenever you need to do something briefly on the internet.

The whole package is highly portable – this is a machine that fits easily in even the smallest messenger bags and won’t break your back either. There are slimmer and lighter laptops, but for the price you get a very attractive form factor.

Compared to other Chromebooks, the C720 is pretty competitive. It lacks the high resolution 1080p display of the Samsung Chromebook 2, but it has a much better processor for multi-tasking. It’s less powerful and worse looking than the Chromebook Pixel, but it’s a tiny fraction of the price. It’s not as good looking as the HP Chromebook 11, but it’s better equipped and doesn’t catch on fire. And I can’t emphasise the value of that enough.

The Acer C720 is the best Chromebook we’ve seen yet. Its portability and long battery life allow it to fill a similar role to a tablet; ideal as a second machine in the home or your primary machine on the road. The surprisingly efficient processor, memory and solid state drive ensure that multiple tabs don’t slow you down, too. The only thing really missing from the machine’s hardware loadout is a higher resolution display, which would allow use of two web-pages or apps side by side. Chrome OS has matured impressively, but there are still a few services – most notably Skype – that are (understandably) absent from the platform. Overall though, the Acer C720 is a surprisingly capable machine at a killer price point.

Early last year we reviewed one of our first projectors at XSReviews, the BenQ W1060. We awarded that...