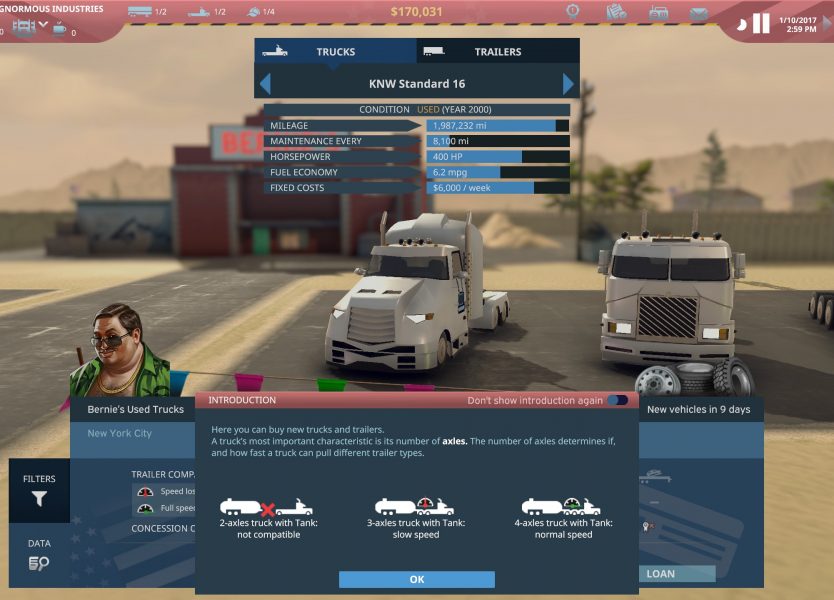 American Truck Simulator scratches a weird itch for me — you get to slowly build up a trucking empire while enjoying the scenery of the western United States, including my adoptive home state of New Mexico. It’s a great way to pass the time while listening to local radio and just relax.

If you’re more interested in the management side of things than the driving itself, then TransRoad USA might be more your style. The game is a tycoon or management sim, set in a similar truck-centric America rendered in interstates, truck stops and goods-producing industries that desperately need your help. Without the actual driving to focus on, you can instead manage your trucks and drivers as you try to take on the competition.

The game was released last week, and I took a few hours today to give it a spin. Here’s what I think. 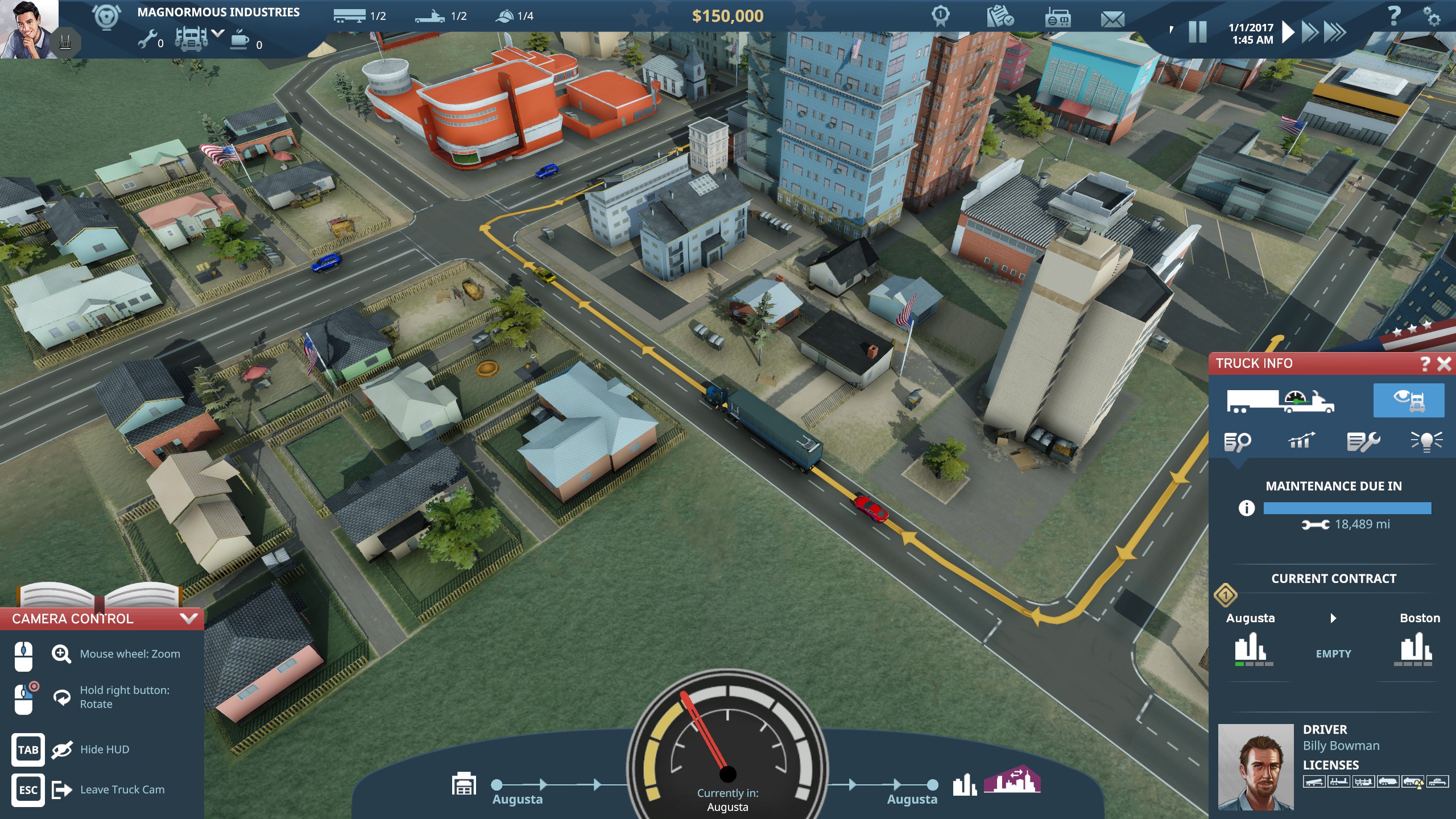 The core gameplay loop is simple, but effective. You’re tasked with hiring drivers, buying trucks and trailers, then sending them out on delivery missions between major cities in the continental United States. The overall style is similar to the recent SimCity remake, and you can zoom in to watch your truck getting loaded up at the dock or all the way out to the entire continent. However, each city is pretty spartan — just a few goods vendors, an interstate or two and maybe a truck store. There’s little appreciable difference from town to town and state to state; it would be nice to see little landmarks or different city layouts as you move around the country to get a sense of the land.

You can choose between contracts for various goods and supplies, whether that’s delivering the mail or providing the raw materials for a furniture maker. You receive a wealth of information about each potential contract, but it was a bit much to take in all at once — often, I just picked the option with the highest profit at the end, particularly if it required multiple journeys as this would reduce the time I would need to spend choosing contracts in the first place. 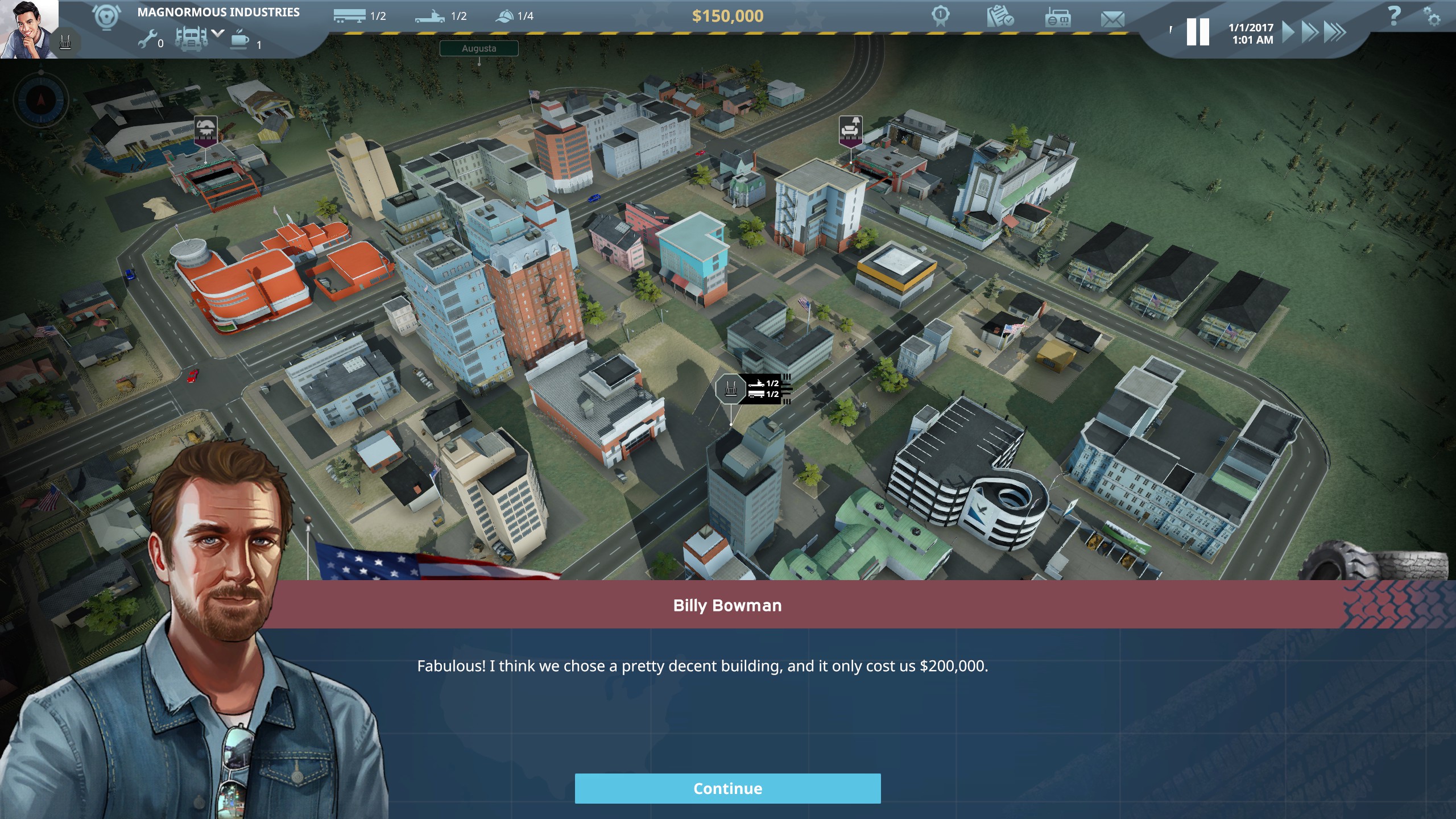 The campaign is a decent introduction. While you’re free to jump into a sandbox game or take on a particular scenario, the best place to start is the campaign. The homely character illustrations and over-earnest voice-acting grate a little bit, but you’ll receive a nice crash course in getting your fledgling logistics business off the ground.

I enjoyed the pacing of the early stages of the campaign, which gave clear and achievable tasks with some latitude for choice. However, some of its instructions became unclear — it wasn’t immediately obvious how to assign a driver to a newly purchased truck and trailer, for instance.

The campaign was also a little more difficult than I expected; at one point I was asked to level up my company by getting my bank balance to $100,000. Despite keeping both drivers busy with non-stop and seemingly profitable deliveries, after 20 minutes I was still at near zero, with no clear indication of where I was going wrong. 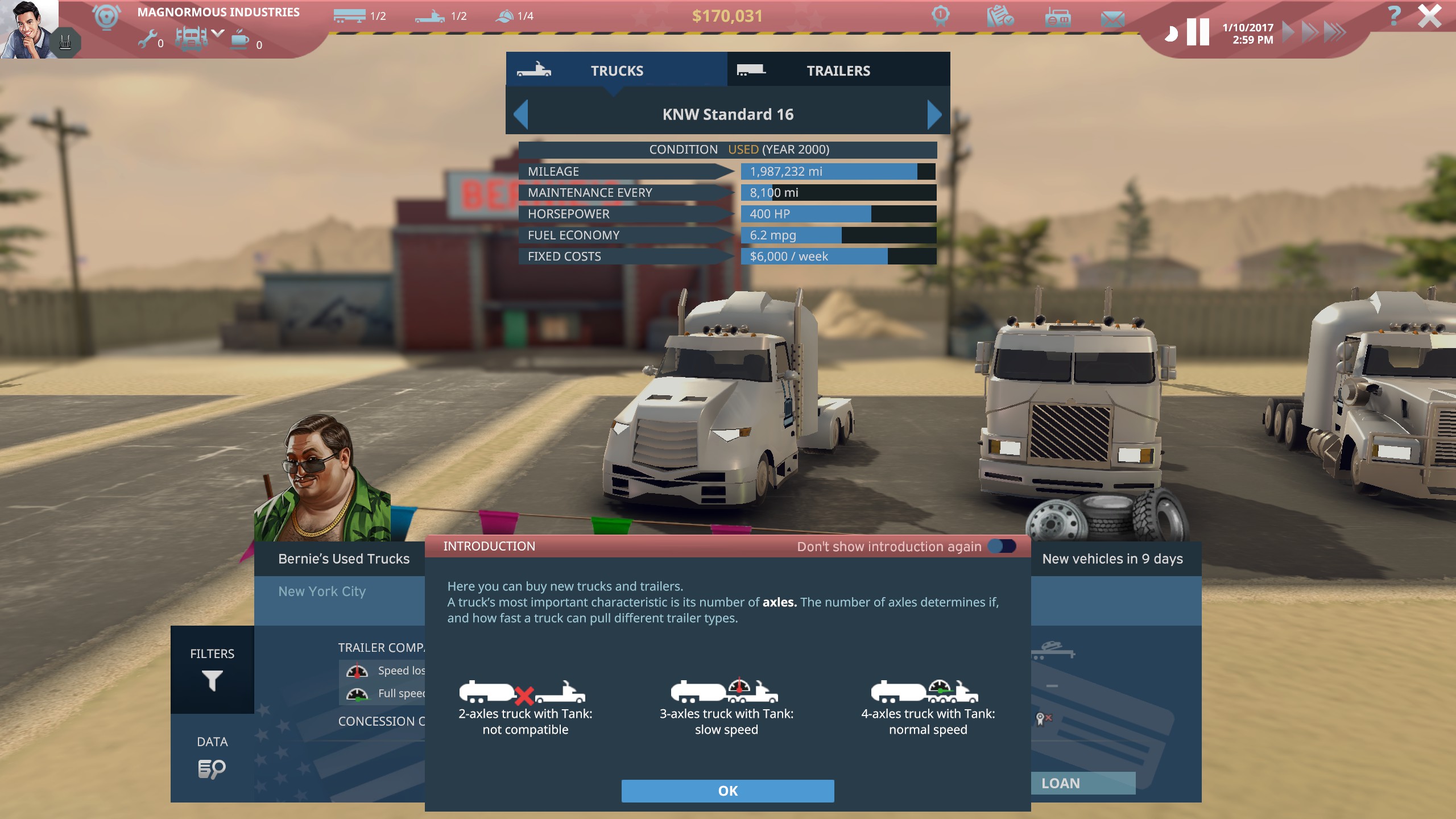 This lack of feedback made it difficult to progress. Part of the charm of management games like Football Manager or Transport Tycoon is that while the basics are quite understandable, you can also invest time looking at arcane stats screens or profit-and-loss diagrams to figure out how to improve. In TransRoad USA, this layer is hard to reach, which in turn makes it difficult to actually make meaningful strategic choices.

Hopefully the latter stages of the tutorial / campaign push you in this direction and provide a better understanding of the game’s mechanics. For example, there are AI-controlled trucking companies operating in the game world, and it would be interesting to see if they use any noticeable strategies that would inform your own play. 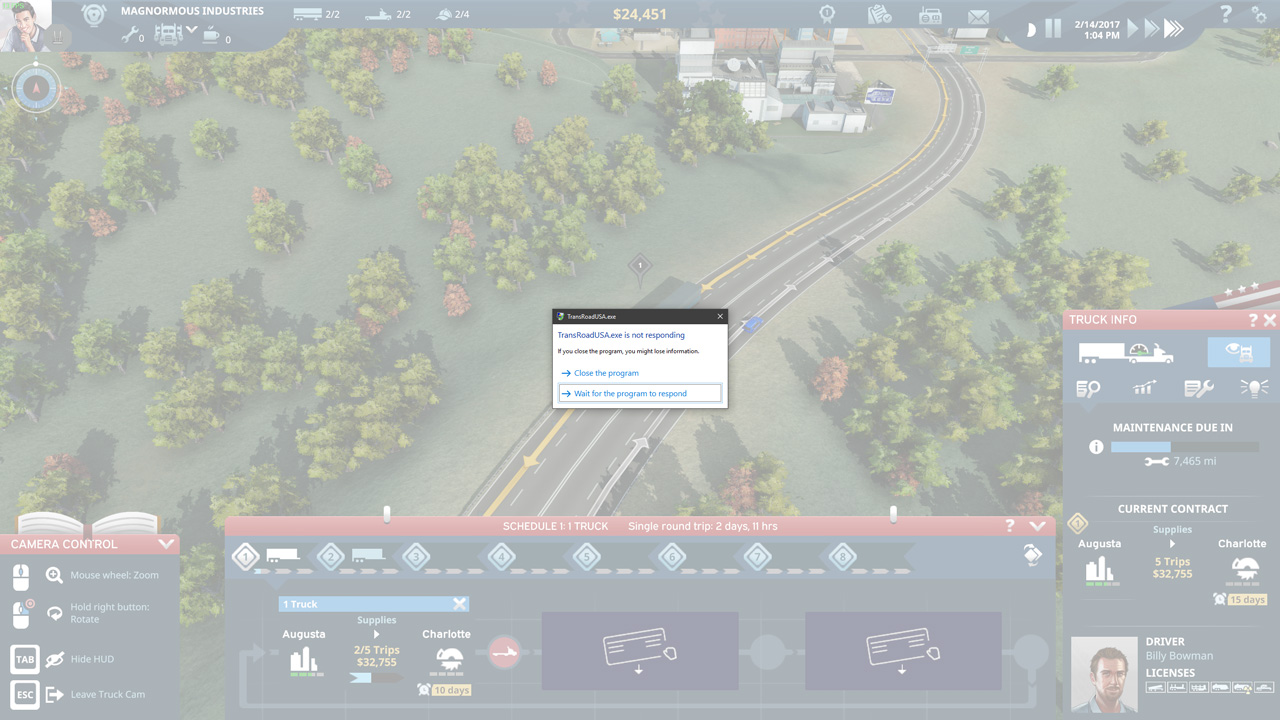 Another thing I noticed during my hours with the game is that it runs quite poorly, even on powerful PCs. I regularly got between 15 and 25 frames per second, whether I was looking at the full continent view or zoomed way in. However, when zoomed in, the game also hitched, freezing completely for at least 30 seconds while the merry music continued. The low fps count is disappointing, as it makes the interface feel clunkier than it is. The graphics settings had little to no impact on the speed of the game either, suggesting a CPU-bound title, a poorly optimised one, or both.

TransRoad USA is an interesting beast. Its core gameplay idea and setting make sense, and I like the feeling of sitting back and watching trucks on a desolate interstate. 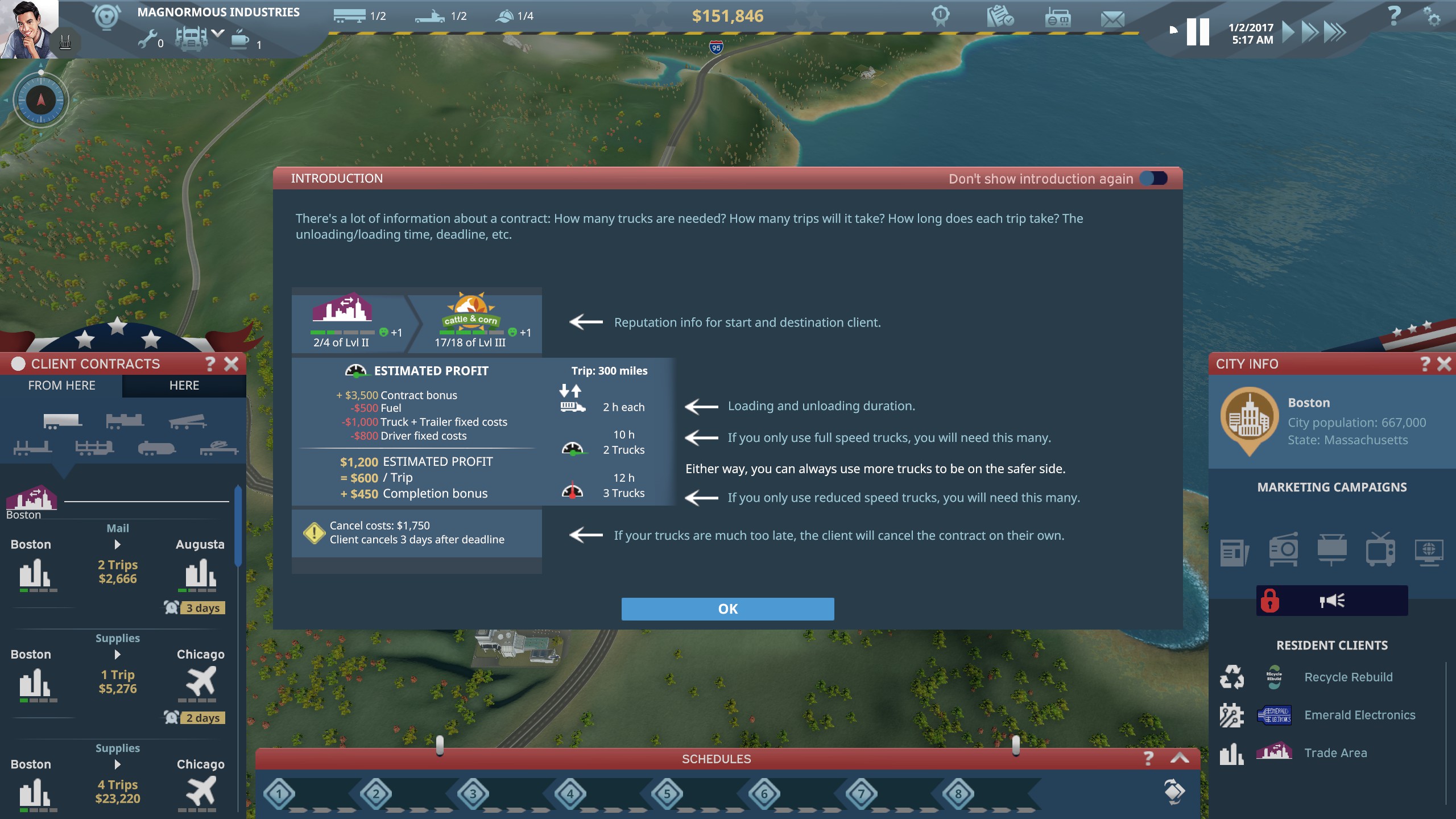 However, while it may have the strategic depth of the great management games, the minute-to-minute gameplay isn’t exciting enough and there’s little to motivate you to really get stuck in. Football Manager and Transport Tycoon are fun because you can watch a football game or see a sleepy town evolve into a megalopolis thanks to your rail links; in TransRoad USA the diversions aren’t nearly as entertaining and the world feels much more static.

In the game’s current form, I can’t recommend it — particularly while the frame rate and hitching issues remain. Still, there’s the beginnings of a good game in here, and if the developers continue to improve it then it may yet be a worthwhile title for fans of transport sims. 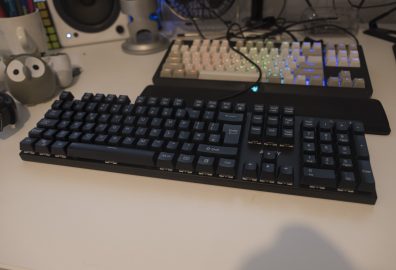 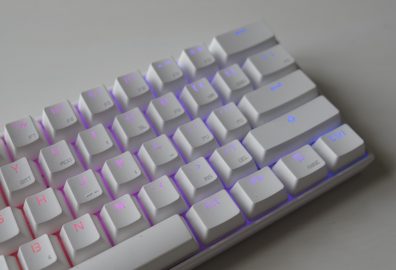 I’m writing these words from my bed, as my wife looks on disapprovingly at the noisy interruption of...