Blizzard is set to show off something big at PAX East

While specifics are a little thin on the ground at the moment, Blizzard is apparently prepping something big for its PAX East announcement. Hopefully it’s a little more exciting than its big reveal at the PS4 debut show, where it announced that Diablo III would appear on the new console. 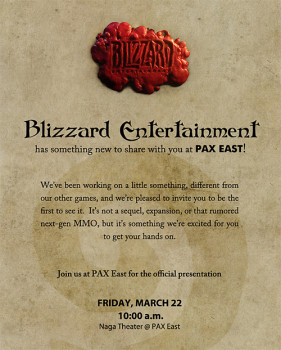 Set to take place on the 22nd March, so next Friday, PAX East is also going to be showcasing a lot of indie games this year. There will be new releases from CluchPlay games, Henry Smith, Moonshot games and plenty of others, all with new Android and iOS games to show off. Most of these devs will also be hosting Ask me Anything sessions.

I just had a look at the schedule for event and there’s a 40k tabletop tournament too? If I could ever trust the airlines to fly my figures over, I’d attend this next year for sure.

Blizzard not holding Blizzcon this year

Publishing giant Blizzard has announced that in 2012, there will be no Blizzcon, with all efforts being...

The Consumer Electronics Show (CES) in Las Vegas is one of the biggest tech events of the year, as...